The Inimitable Mysteries of the Elusive Pixel Painter Uno Moralez

The 52 year old artist Uno Moralez (real name Stas Orlov) grew up behind the Iron Curtain in the Soviet Union (Russia). It is probably his surreal childhood that he spent in an environment of indoctrination, his drawing talent and chosen contemporary medium (digital pixels) that make his art so unusual and compelling.

Moralez has developed a unique way of communicating narrative. Although they are not comics, the artist uses more than one image to tell his story, but doesn’t rely on dialogue. In an earlier interview with The Comic Journal he explains, ‘My short stories derive from images which don’t fit in a one single image, plotwise. This is not exactly a comic, that’s why I draw only key scenes leaving out details. And then reader’s imagination starts to work. That is important.’

Moralez works primarily in two colors (often black and white), and his “noirish” settings offer a fascinating amalgamation of Soviet art, horror, sci-fi, traditional iconography, but also Japanese manga and David Lynch. His admiration for the latter is also illustrated by his portrayal of special agent Dale Cooper, the main character from the darkly surrealistic tv series Twin Peaks, Lynch created in the 90s.

Tbe computer and its devices are Moralez’ primary tool for both creation and publication of his standalone images, animated gifs, and digital only webcomics. The animated gifs have a special place in his work. He says,’Gif animation is fun, it is concise and expressive. How can it be ignored? I try to use it with the measure and use it as needed.’

Many fans (often Americans) experience Moralez’ art as oppressive and compare it to horror. Personally, he doesn’t see his art as terrifying and prefers to define it as mysterious.

Scroll down and explore his unfathomable mysteries… 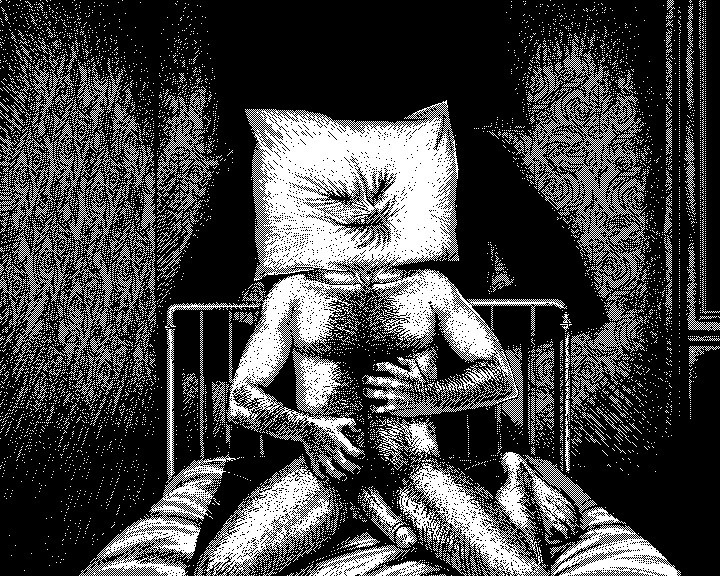 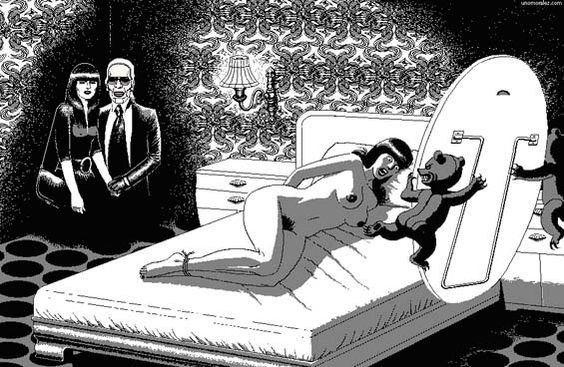 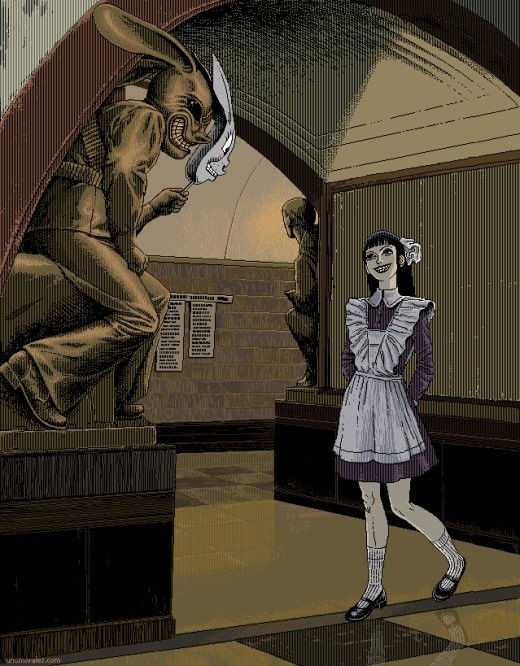 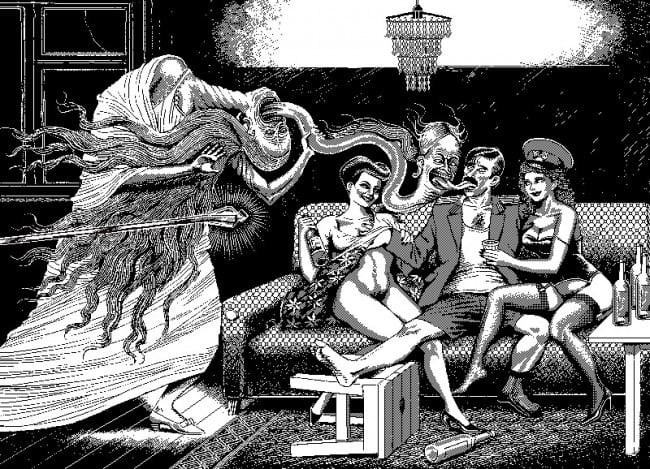 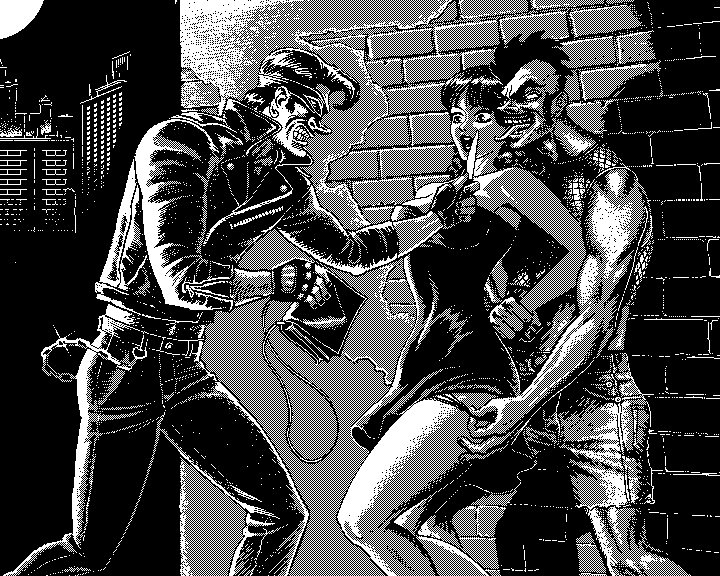 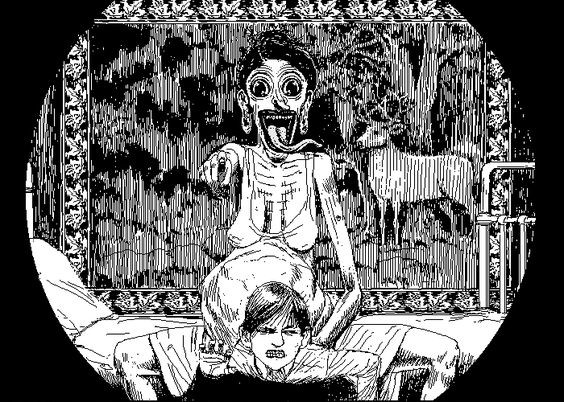 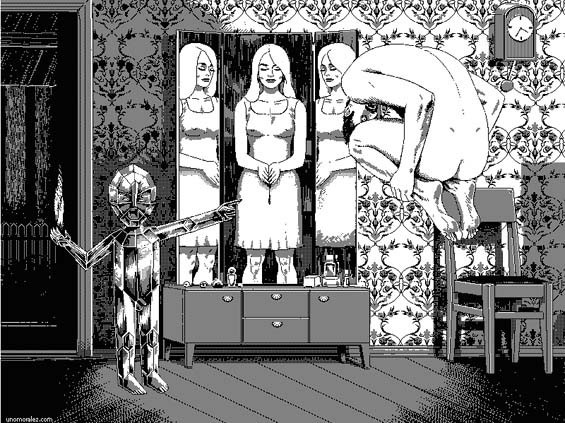 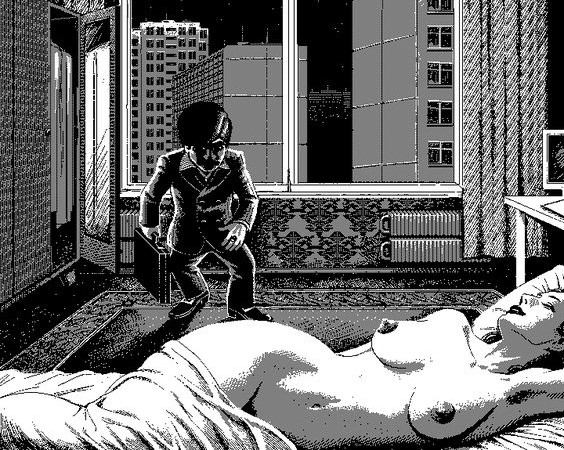 Click here for the complete story of this mustache-bearing dwarf! 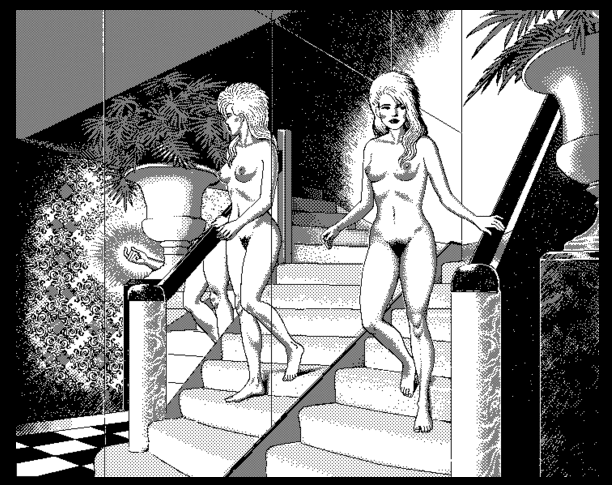 From his digital only webcomic entitled ‘Blue Teeth ‘ (click the link for the complete comic!)

Who Is General Minamoto Yoshitsune Making Love to?
15 October 2017