The men in this set wear the Ming bun while the women’s haircut is characteristic of the Kangxi period (1662-1722). It is therefore plausible that this album dates from the early 18th century. In the fine line drawing, pay particular attention to the depiction of eyes and eyebrows, which are sometimes compared to the feathered feelers of moths. 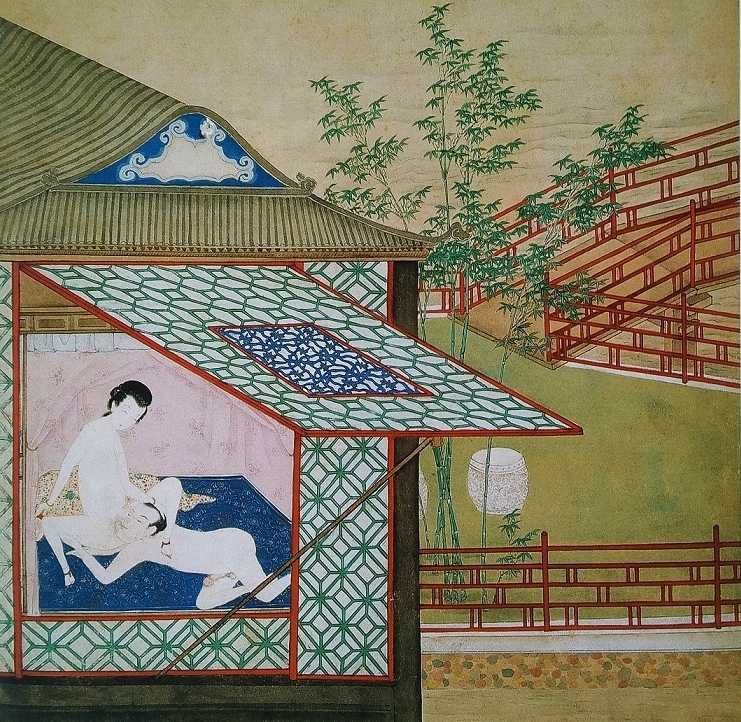 After the hero of the story, the Late Night Student, wins over his coveted Fragrant Cloud, he indulges in its most intimate charm (Fig.1). His narrow shoulders and pale skin characterize a scholar. 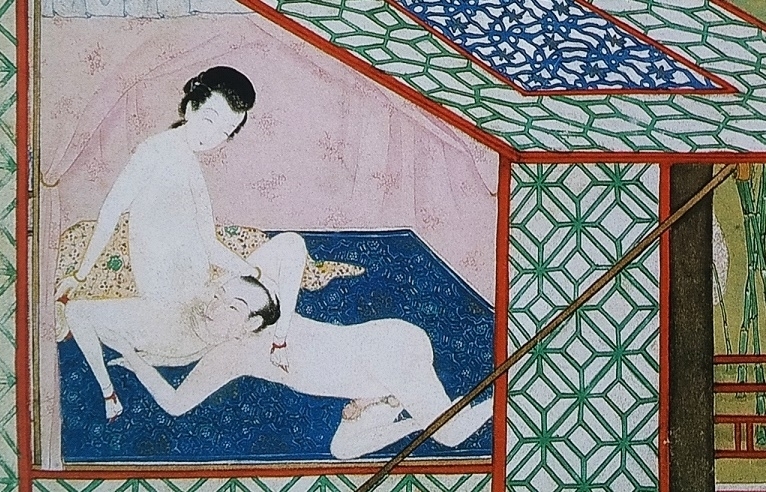 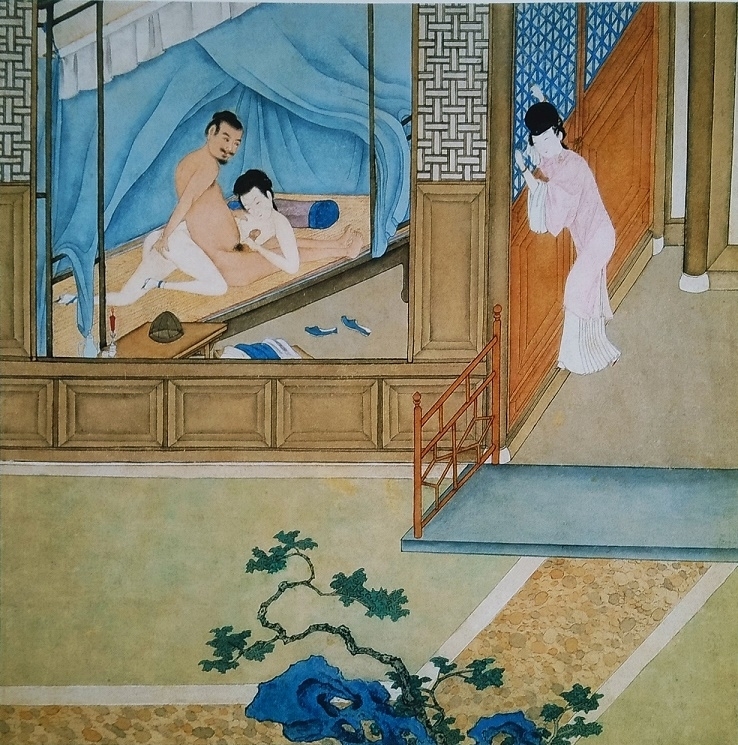 The merchant Kuan is humiliated because his wife has left him for the late night student Weiyangsheng aka. Morning Dusk Scholar (Fig.2). He sold himself as a servant to his enemy’s household in order to take revenge on him by taking his wife in turn. This scene shows Kuan sharing the bed with his chambermaid. He is all too aware that he is being watched by the young lady of the house Delicious Fragrance, who clings to the open lattice of the window with excitement. 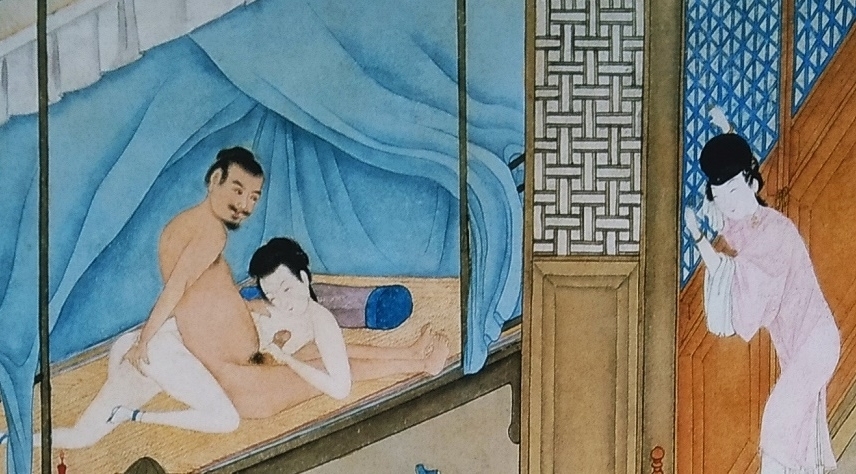 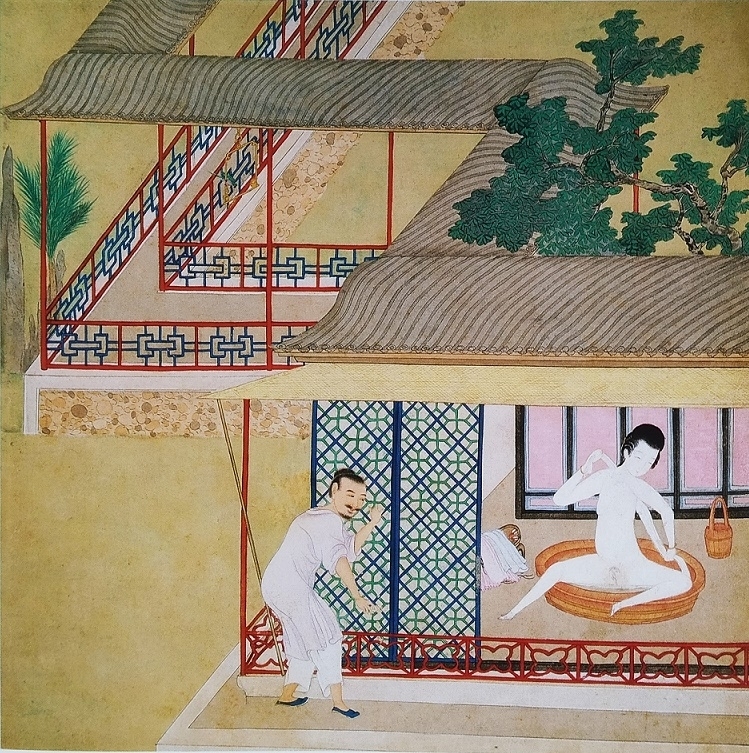 Determined to seduce this robust man, she intentionally takes a bath whenever he is nearby (Fig.3). She offers him a beautiful view of all her glory. 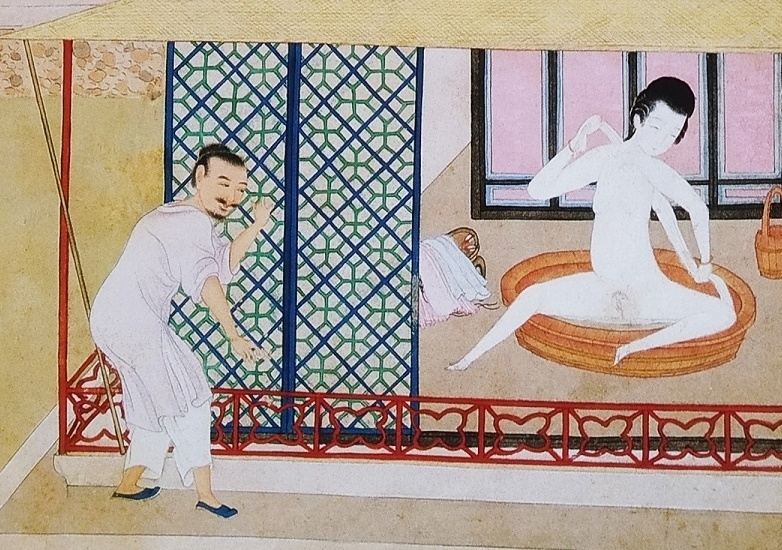 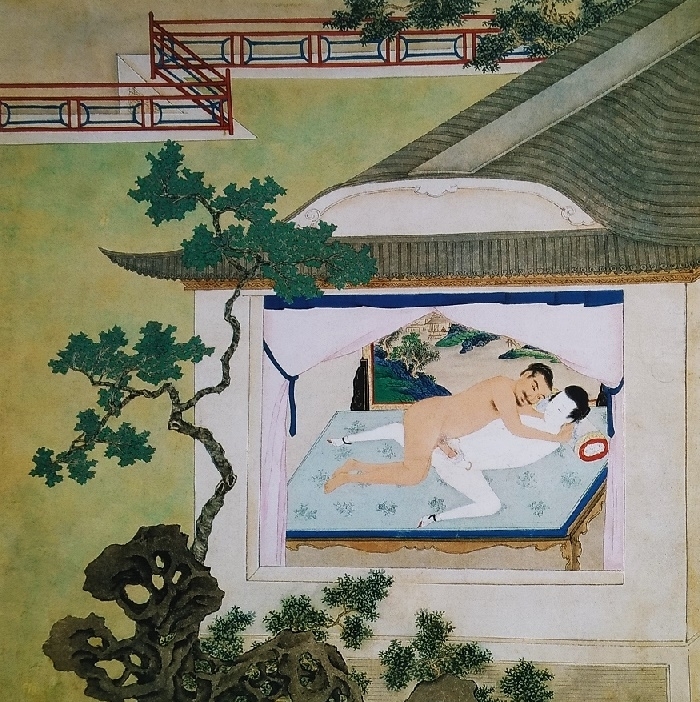 Delightful Fragrance, who has not received the attention and love from her young husband for over a year, surrenders passionately to the experienced and prosperous Kuan (Fig.4). From then on she invites him into her bed every night. 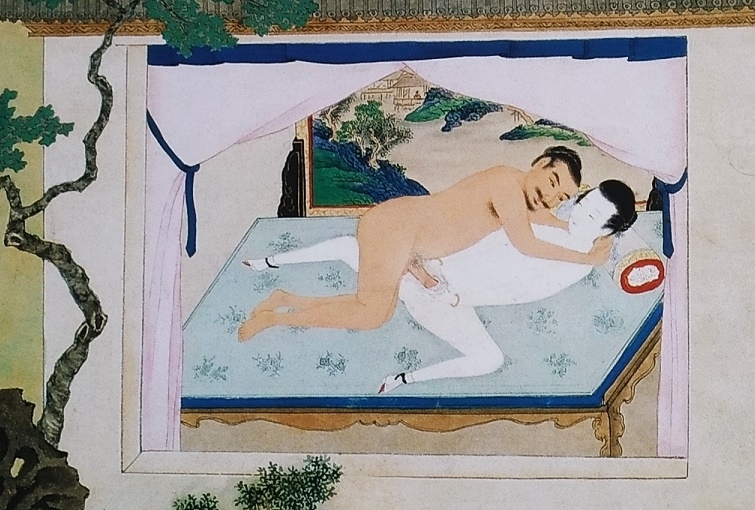 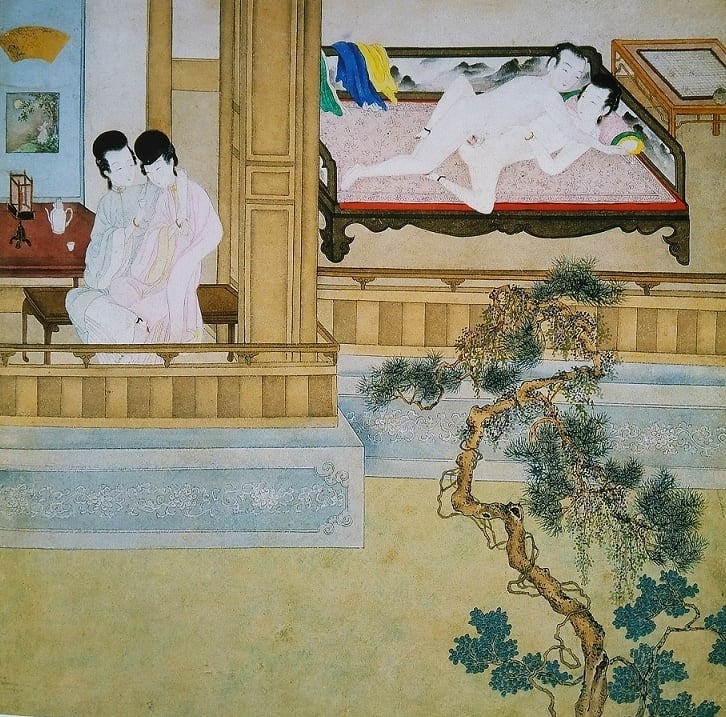 Meanwhile, Flagrant Cloud has arranged a meeting between the insatiable late-night Student and her two nieces, whom she wants to share in the pleasure (Fig.5). While having fun with one girl, Fragrant Cloud encouragingly prepares the younger girl for the courtship to come. She is afraid of his overwhelming genitals. The artist delicately guides the viewer’s eye over the performance in a circular manner. The whimsically shaped pine tree directs our gaze upwards to the bed scene, then via the stretched male legs to the room with the two women and from there, via the deliberately empty space of the garden, back to the tree. 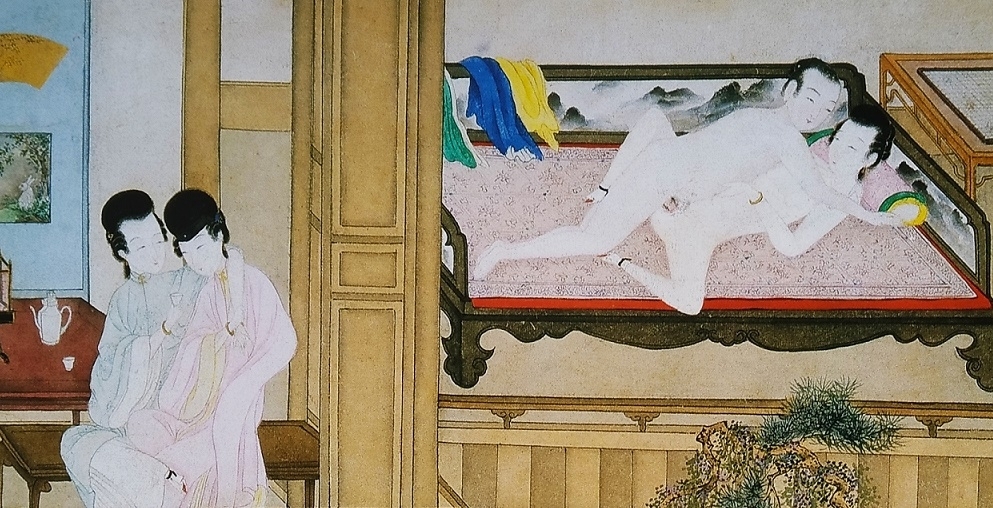 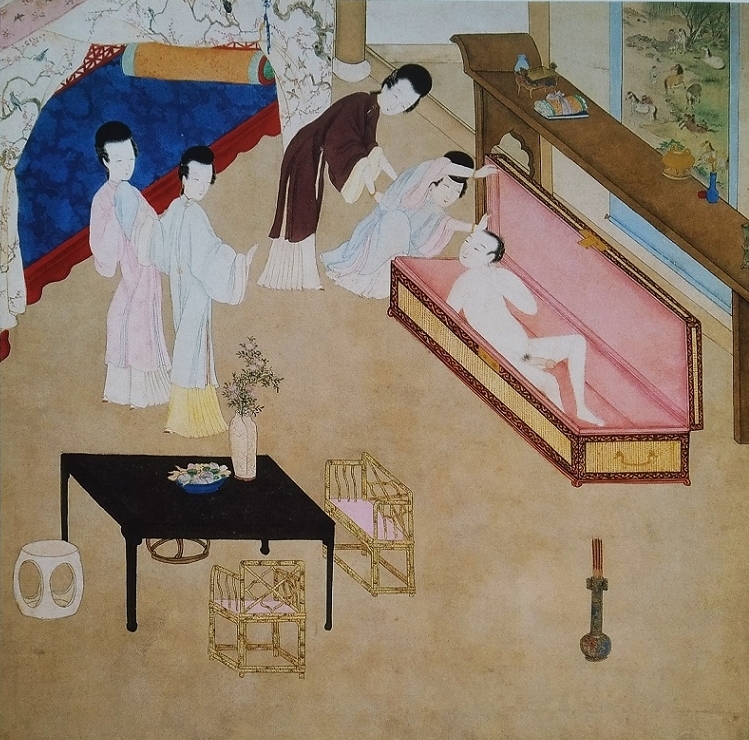 After several amorous encounters with his three lovers (Fig.6), the student is caught one afternoon by Mrs. Ch’en, an aunt of the girls, who happened to visit. He has hidden himself in an empty bookcase in vain. Here the painter makes our eye go around in the opposite direction, via the table with the bamboo chairs to the two startled girls. Behind them, the open bed curtains curve toward the bending figures. We return to the furniture via the elongated box and the bronze throwing game. 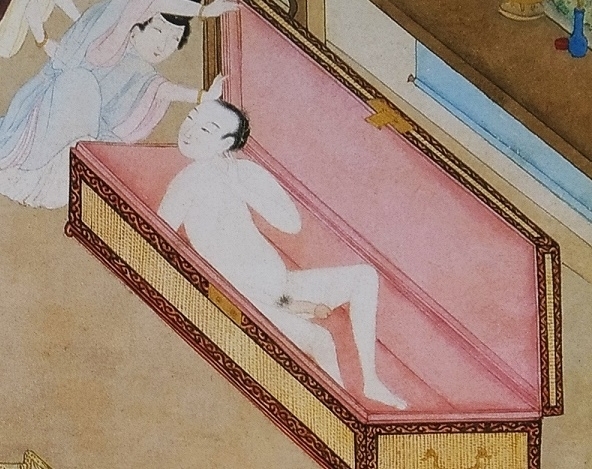 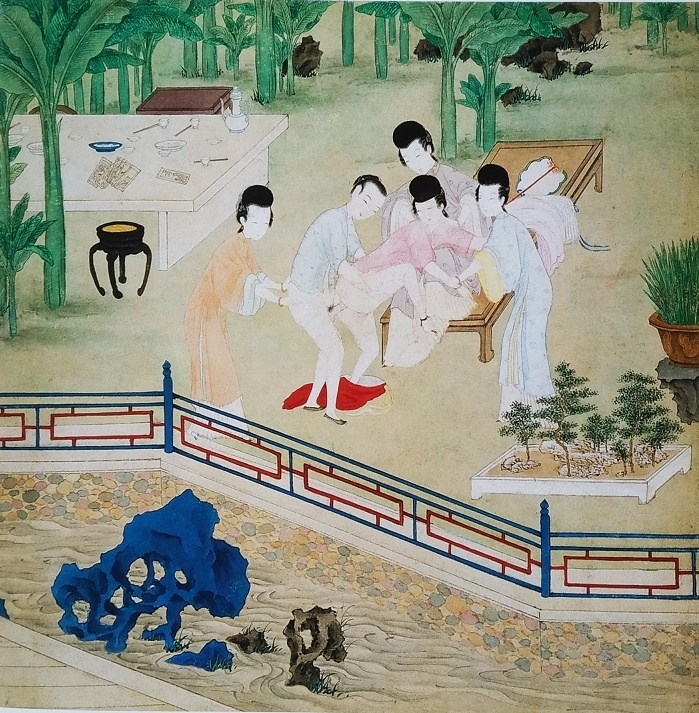 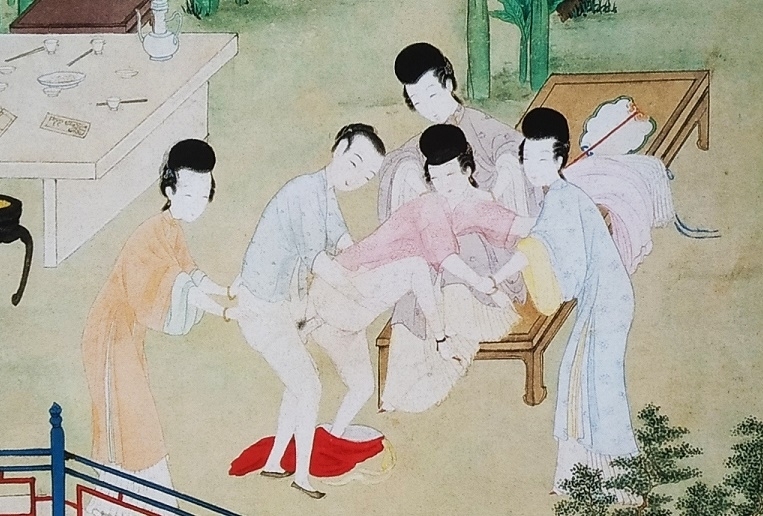 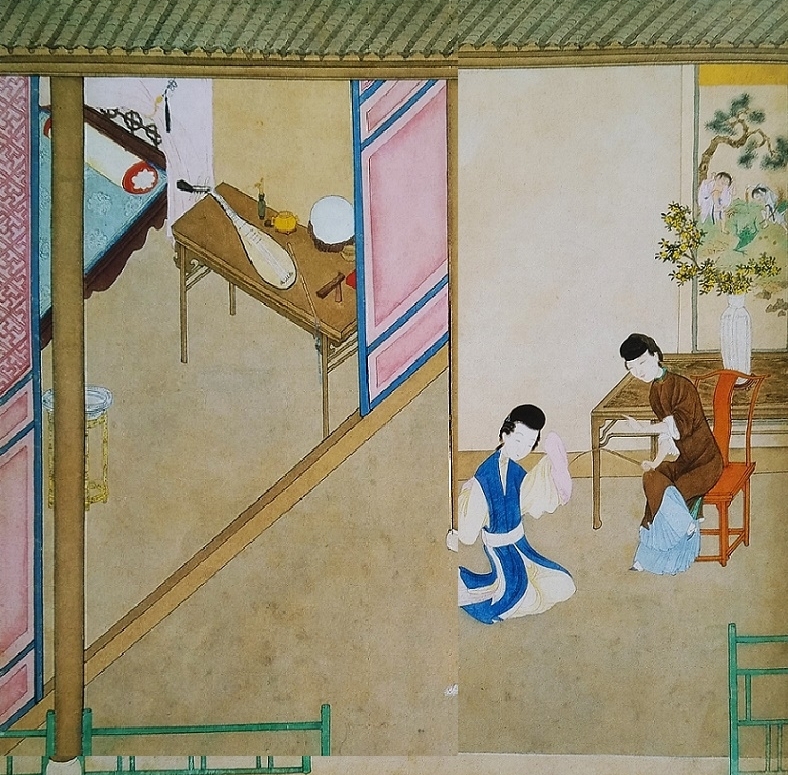 After several developments in the story, Kuan sells Delicious Fragrance to a brothel (Fig.8). However, she does not meet the requirements. Her old master decides to chastise her. 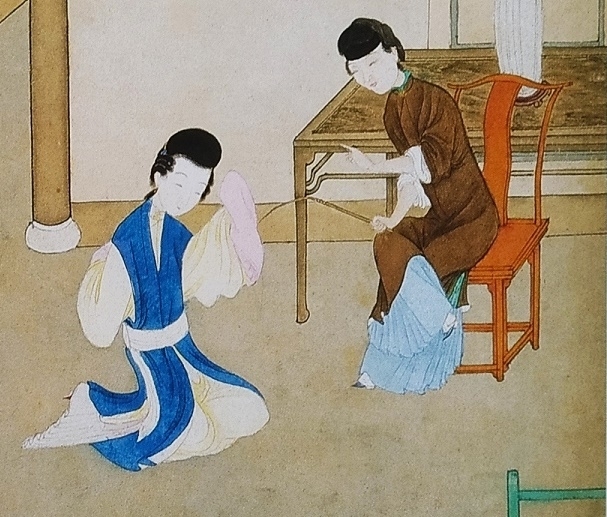 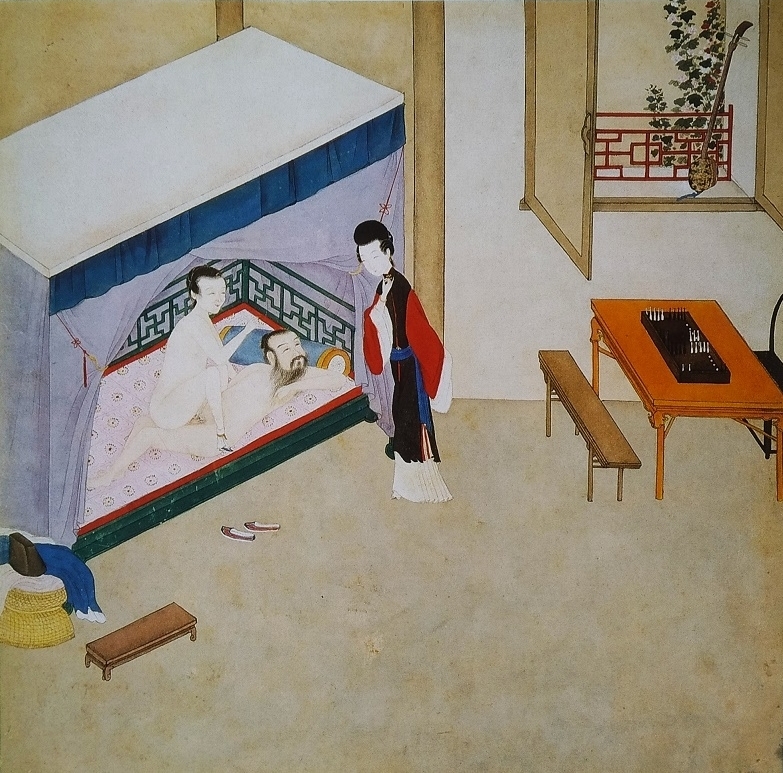 The inexperienced girl is instructed in the secrets of the Higher Art of Lovemaking (Fig.9). The madam lets her watch as she shares the bed with a chosen customer. 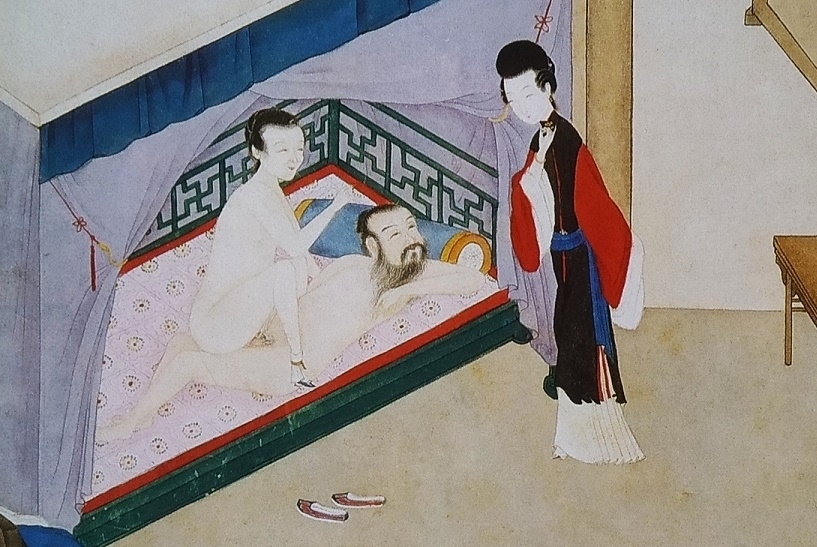 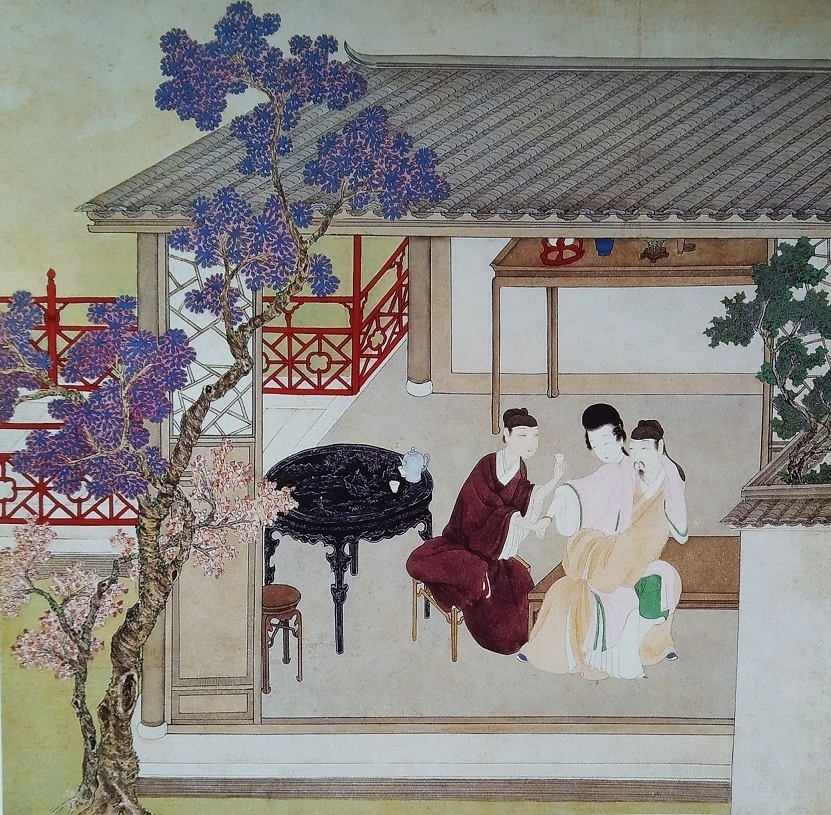 In a short time, Delicious Fragrance develops into a famous courtesan and the literate of the capital are eager to pay her a visit (Fig.10). This painting shows two gentlemen, a young and an old man, seeking her favours at the same time. 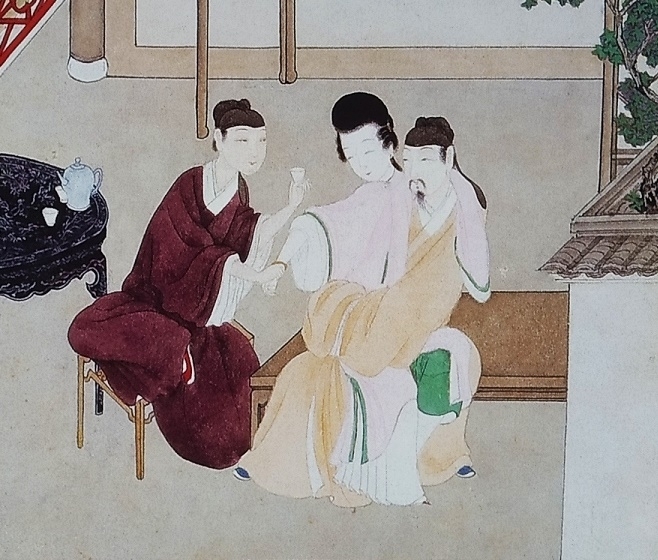 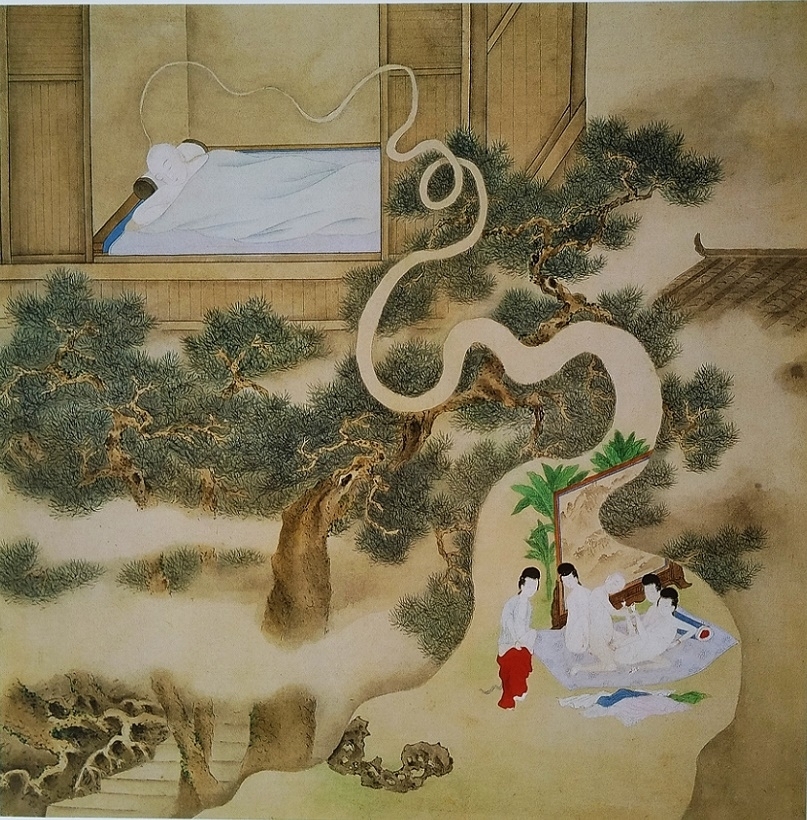 After the death of his wife, the Student repents late at night (Fig.11). Full of remorse for the suffering he has caused, he retires to a monastery. On his path to inner detachment, he is haunted by lustful dreams, in which he relives his former amorous adventures. 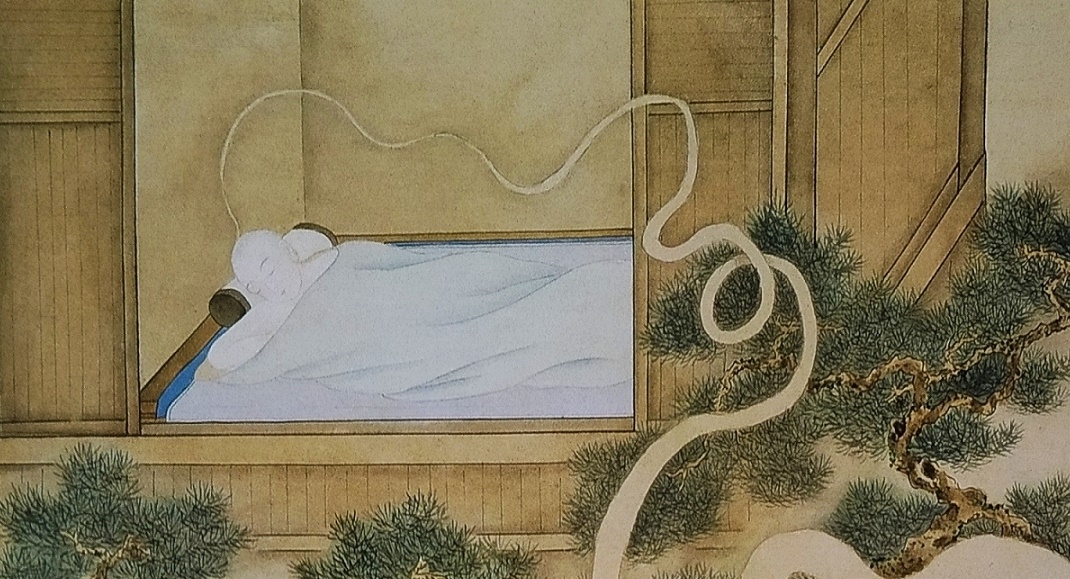 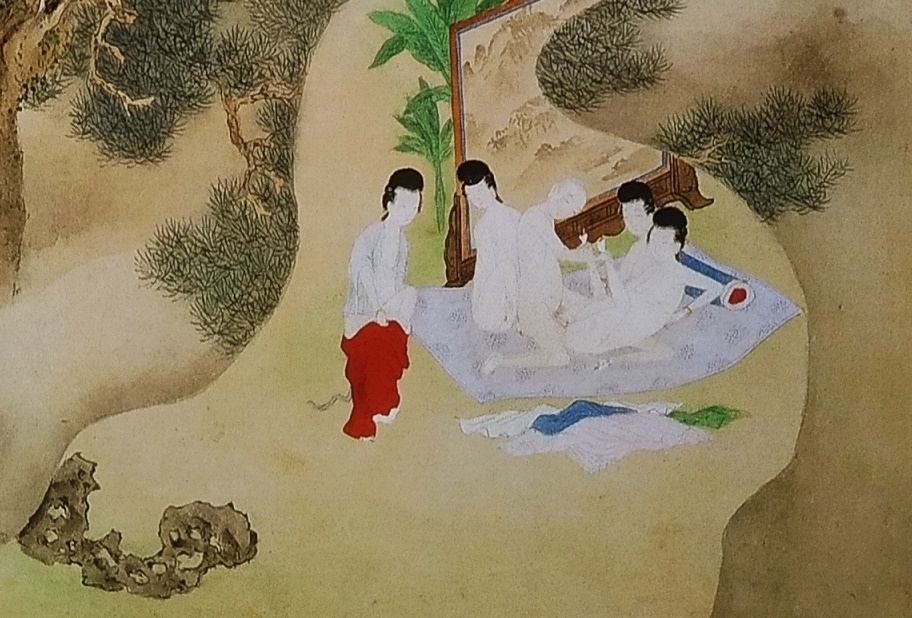 * Rouputuan is a novel of the Ming Period, first issued in 1634 and written by Li Yu (b.1611), the well-known author and dramatist, famous for his extravagant ways. The novel is a mixture of the sensual and the ethical in a story designed to entertain the reader as well as reform him.

Let us know your thoughts on ancient Chinese erotica in the comment box below…!!

Mischievous Graces in the Art of Cesar Santos
24 januari 2022

Thanks Terry. Yes, a Chinese classic!