Forgotten Paradises: the Sovereignty of Sex in Lost Girls, by Alan Moore and Melinda Gebbie 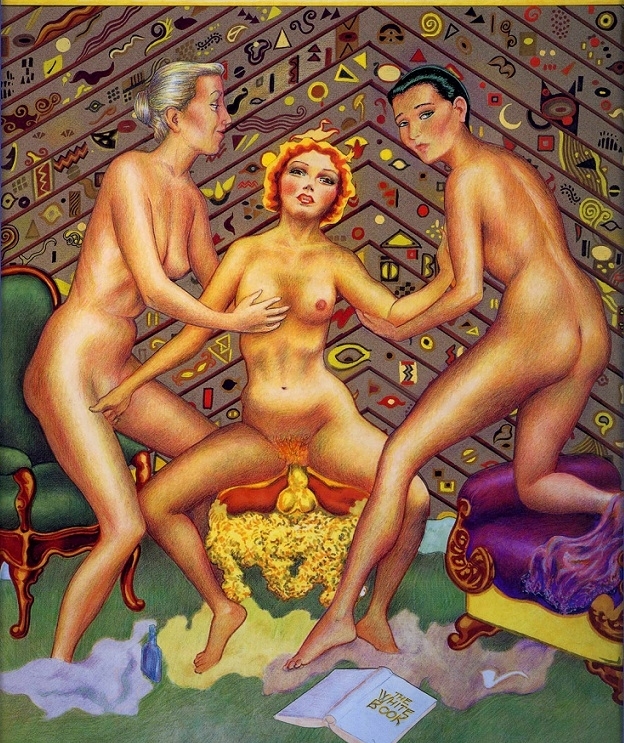 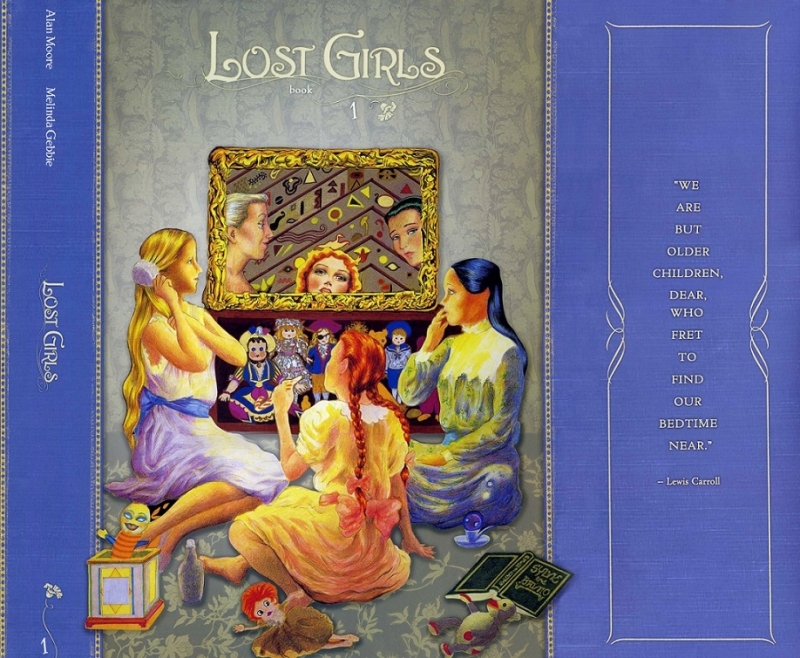 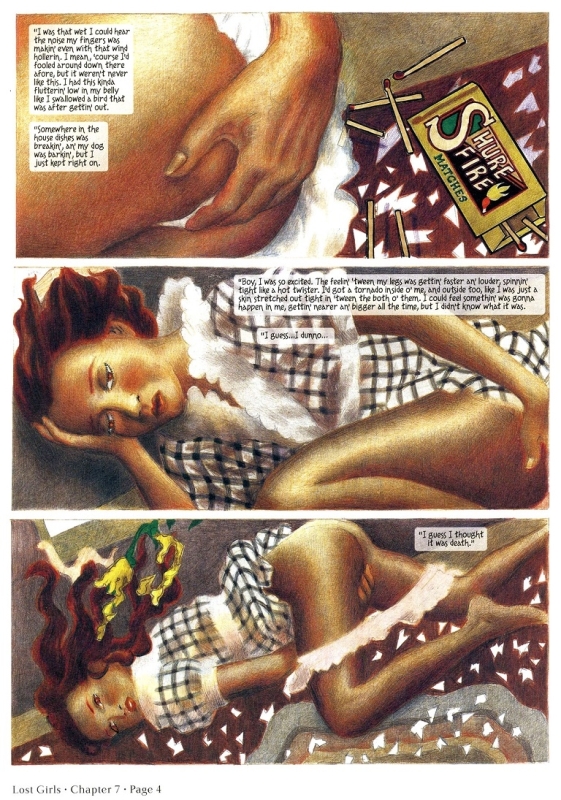 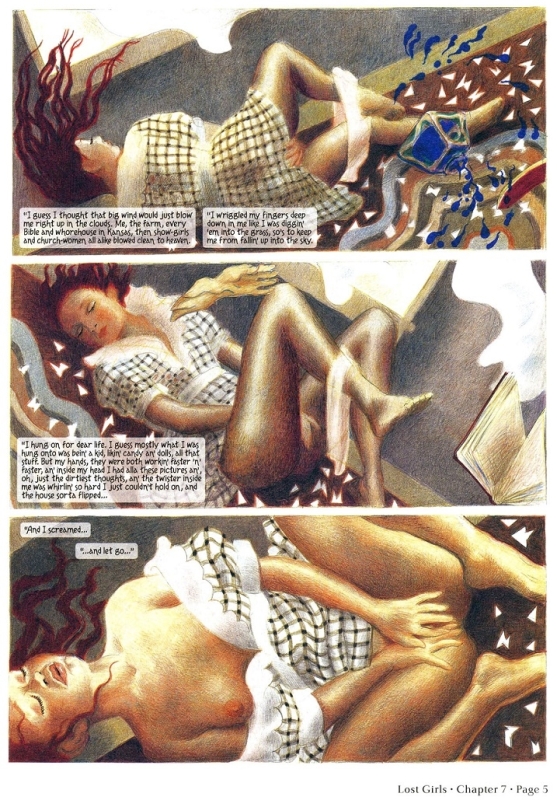 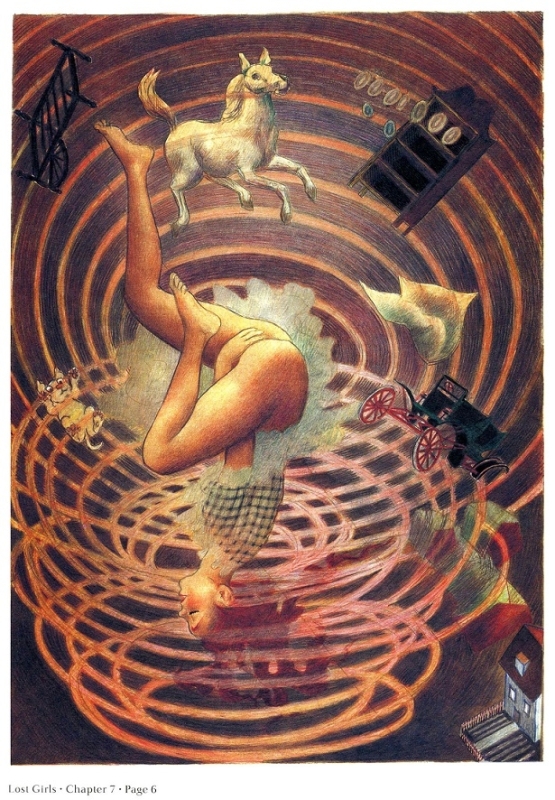 In this encounter, each character reports how her sexual initiation took place. As in Watchmen or The League of Extraordinary Gentlemen, in Lost Girls, the gathering of fictional characters from different works is not casual, it allows for different points of view on a subject to be explored and developed, so that the narrative unfolds, not linearly, but in ramifications that offer themselves like images in a kaleidoscope, open to the reader's interpretation. 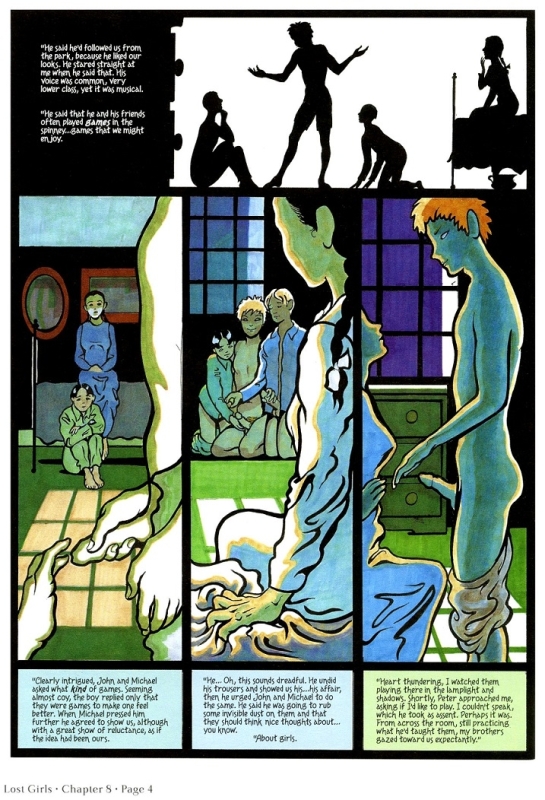 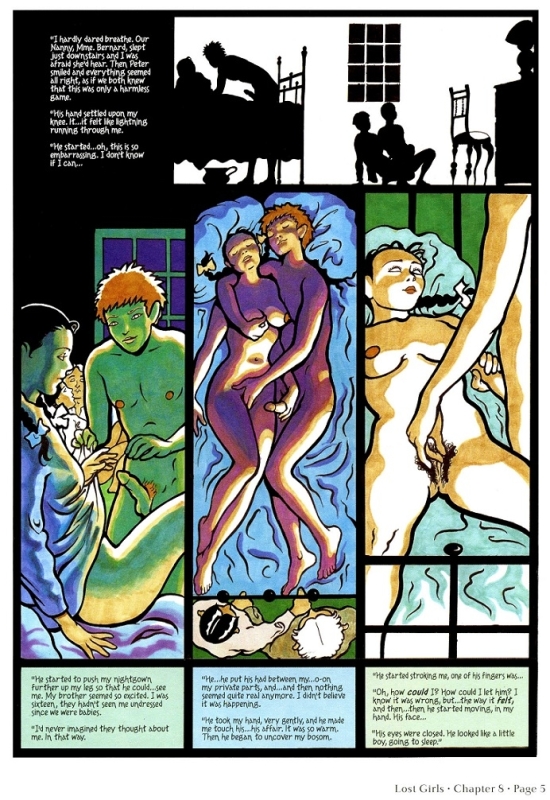 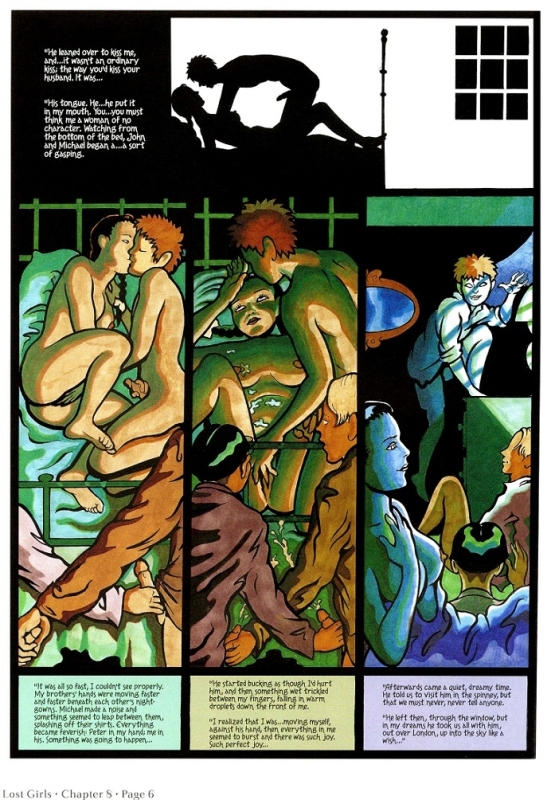 As Lost Girls is an openly pornographic work, according to the purposes of Alan Moore and Melinda Gebbie, the reading that the two artists propose on those literary classics inevitably seeks in sexuality the elements capable of triggering the narrative, as Alan Moore says in an interview:

'All three books are filled with powerful metaphors and images that can be interpreted in a sexual way. That was probably what sparked off the whole idea when I was just thinking about 'Peter Pan,' and dreams of flying can be a metaphor for sexual expression. I'm sure these things weren't intended as sexual ideas, but they have great application if they are used that way.' 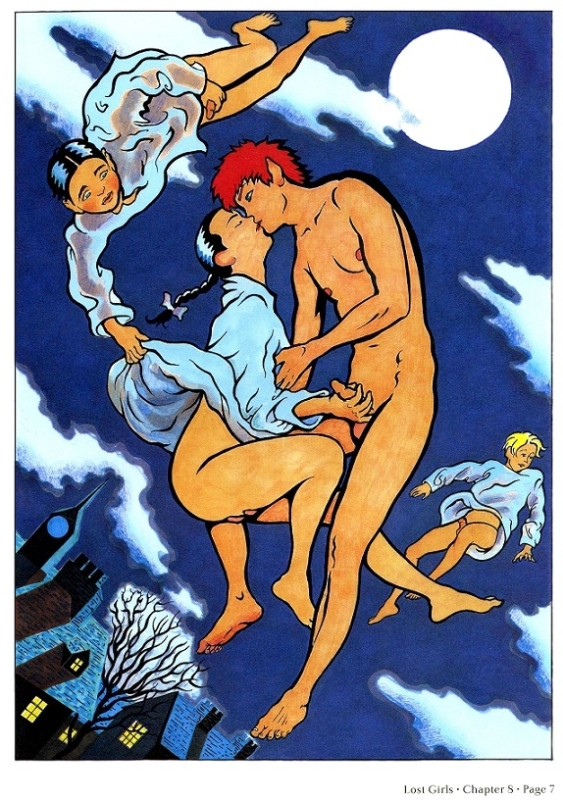 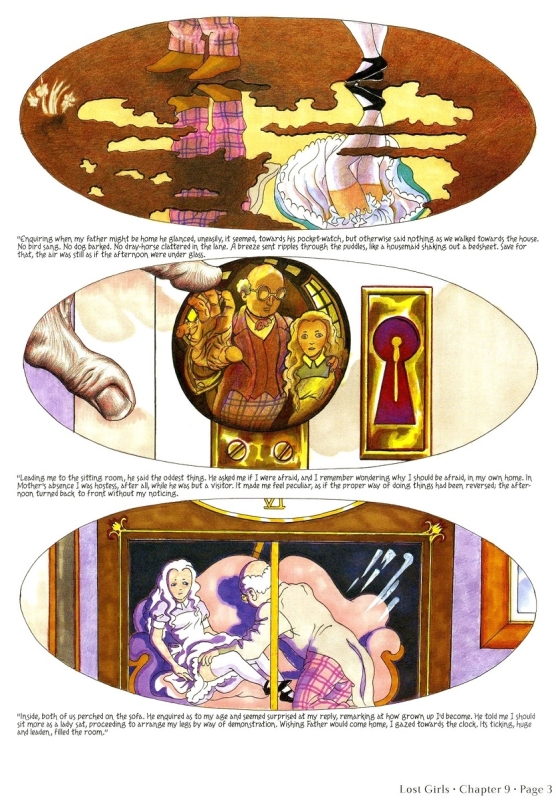 In this way, the situations of the original works are not reimagined as sexual metaphors, but are re-encoded according to what the characters physically feel and live, in Moore and Gebbie's narrative. For example, Captain Hook, in this work, is called Captain Huxley. He's one of the fellows at the stock market where Wendy's father works, and he has a crooked, claw-shaped hand, as if he's a victim of arthritis. 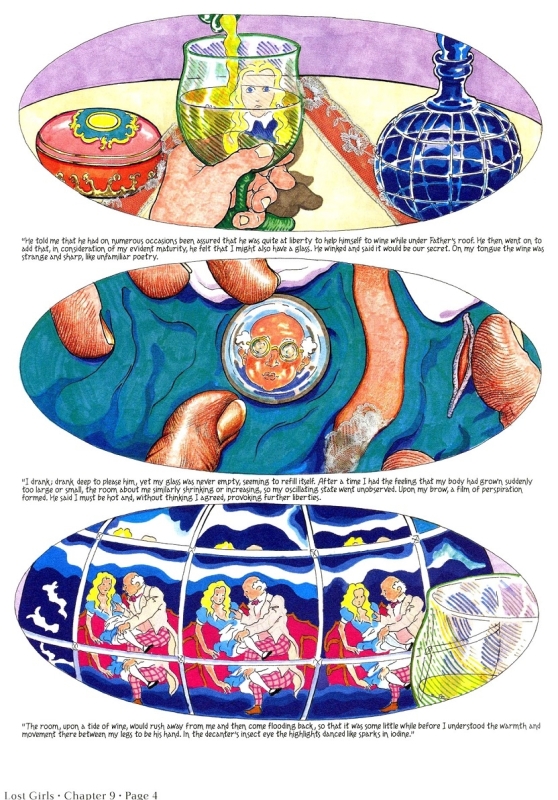 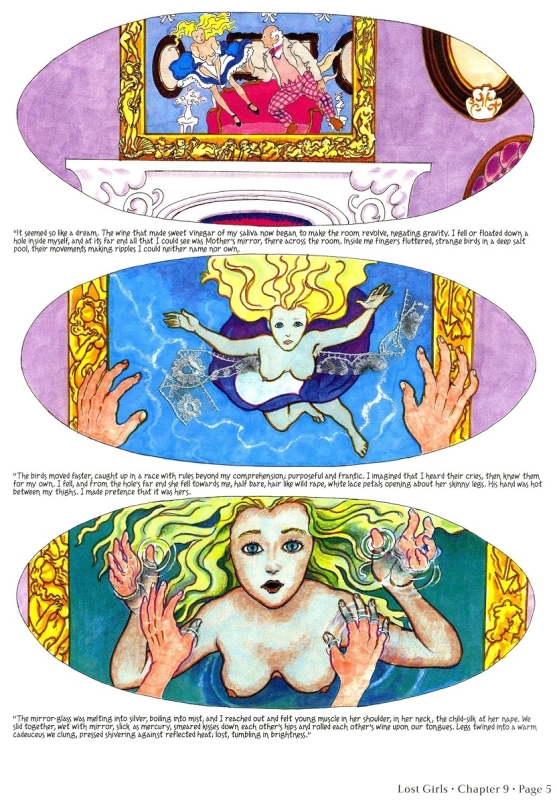 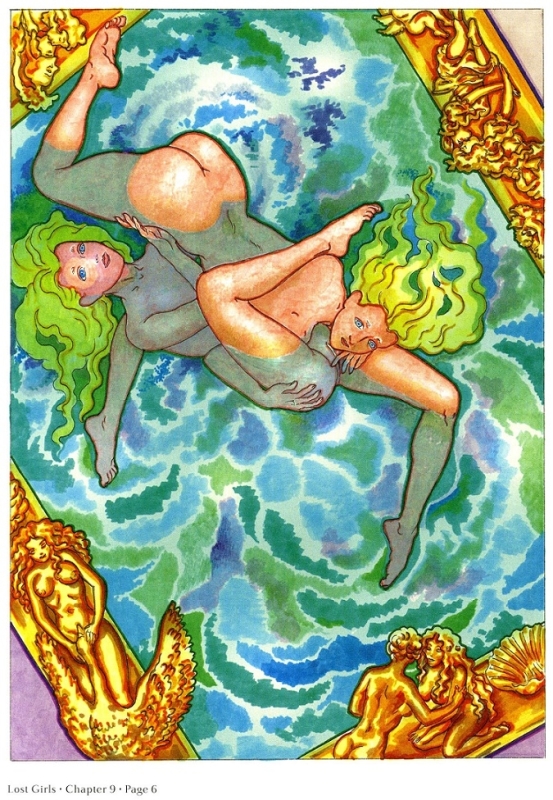 These interpretations are outlined by Melinda Gebbie's drawings in a different way for the story of each of the characters. Although the story takes place in the 1910s and Melinda Gebbie chose Art Nouveau as the dominant style in her palette and references, the design of the panels and the colors of the drawings are elaborated according to the origin of the characters and the way they see and relate to reality (Fig.16 to 22). 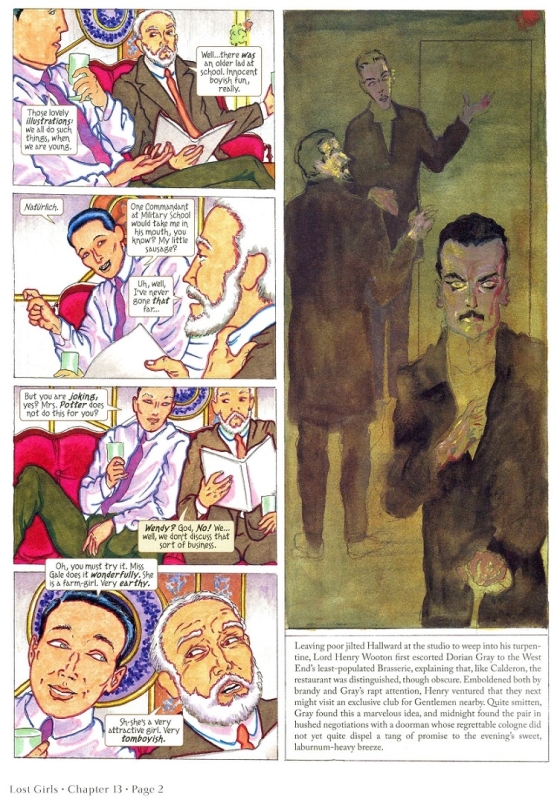 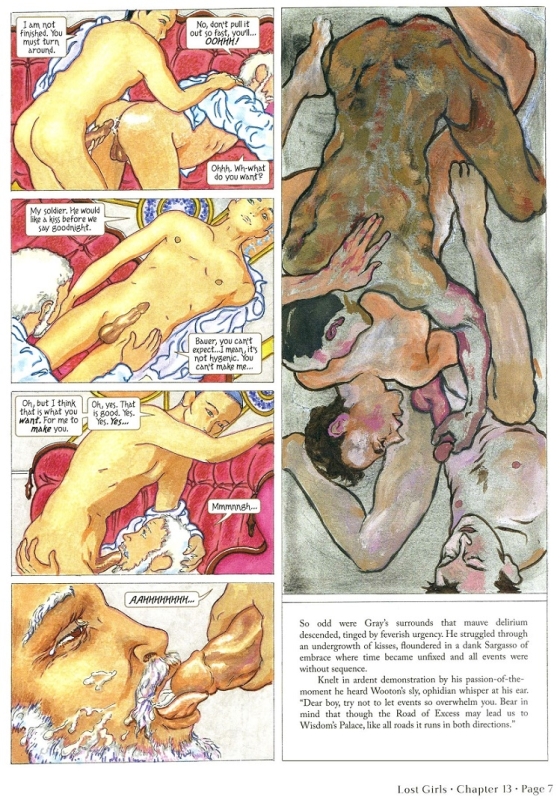 Therefore, the panels related to Dorothy are horizontal rectangles, determined by the vastness of the field and the farm, in which warm tones stand out, as if to remind us that the story takes place in Kansas. In Wendy's narrative, the panels are vertical rectangles, with silhouettes of characters at the top. Such design follows the vertical axis of the trees and Peter's “flights” through the woods where he meets Wendy.

In the narrative centered on Alice, however, we no longer have rectangles, but oval panels that resemble mirrors, which reminds us of the book Alice through the looking glass. There are also, according to Melinda Gebbie, references to Aubrey Beardsley and Egon Schiele (Fig. 14 and 15), in some passages of Lost Girls: 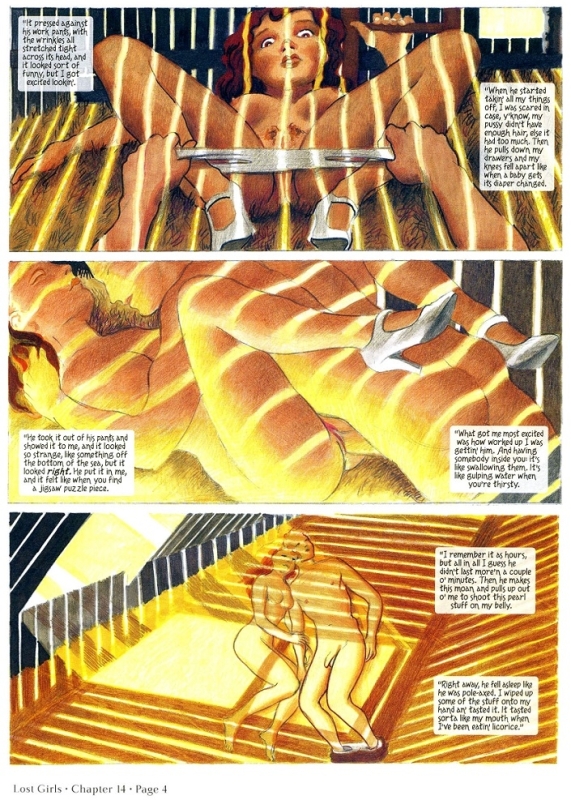 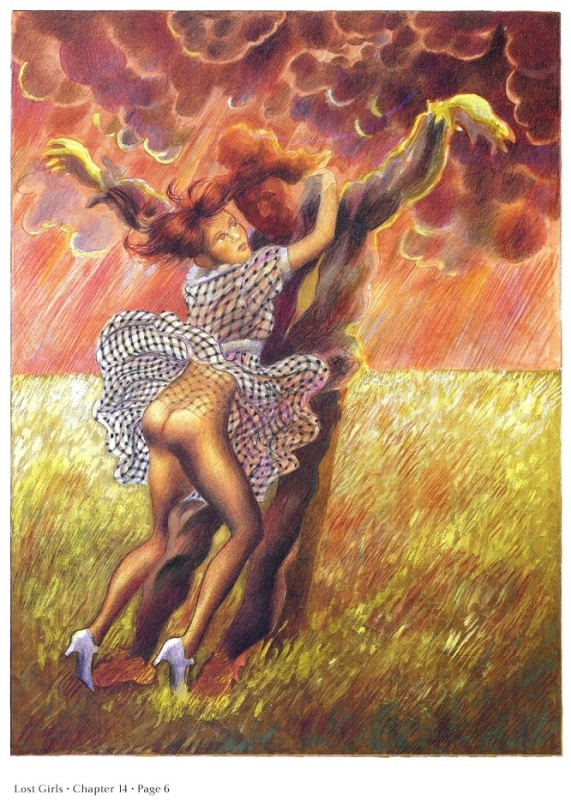 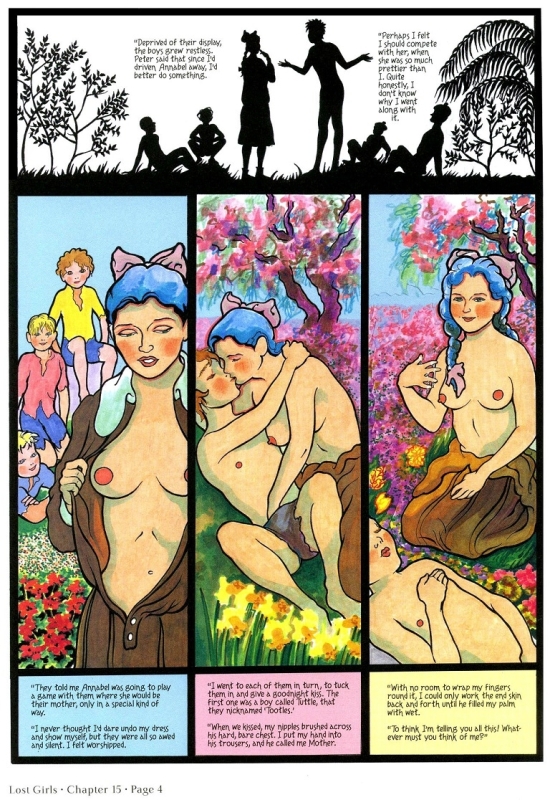 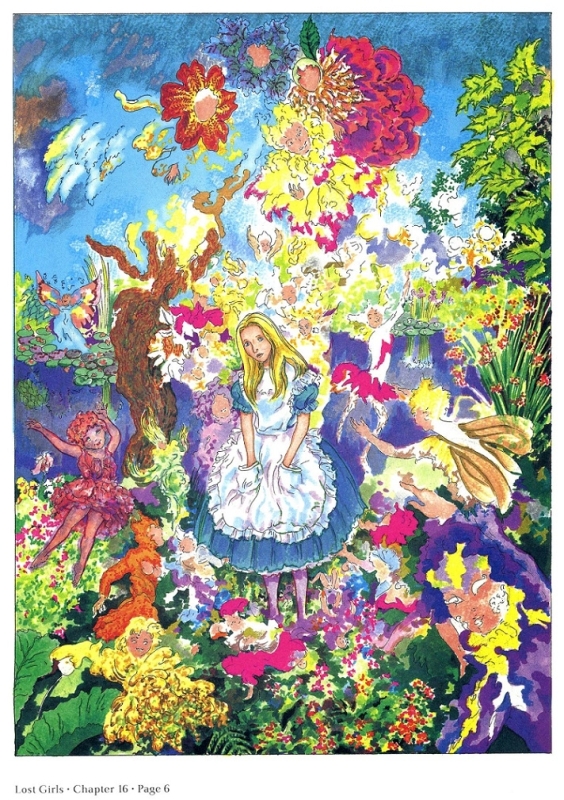 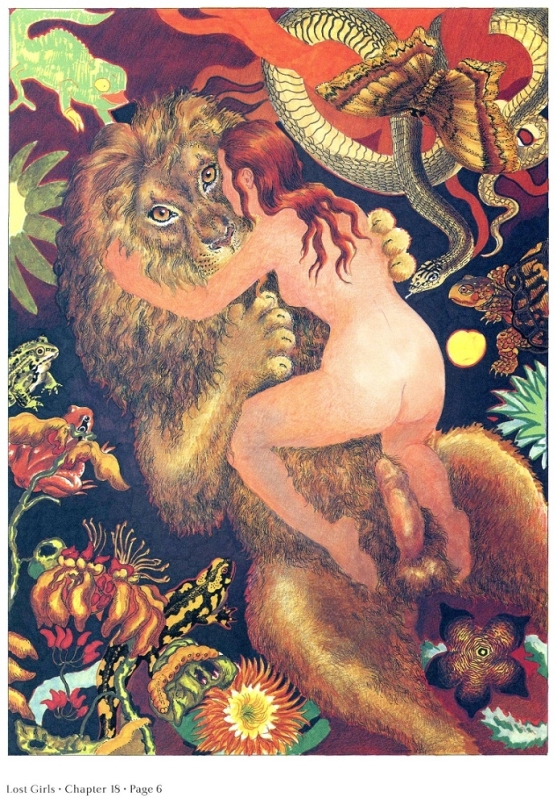 Lost Girls can be interpreted, therefore, as a work that opposes the unnecessary and useless expense of wars, by making the accounts of Alice, Wendy and Dorothy, to a certain extent, triumph over reality, at the moment when memory, retrieved in the form of a report, is established not only as a connection between them, but as spaces of representation, in which the relationship between them prevails over the lack of meaning of existence itself. So, to Alan Moore:

They continue to stay in the hotel even after everyone's left and they know that the soldiers are coming, because they feel that it is more important. The stories they are telling and the fact that they are telling them is somehow more important than this terrible storm that is breaking over Europe and that will destroy everything. The exact opposite of that. 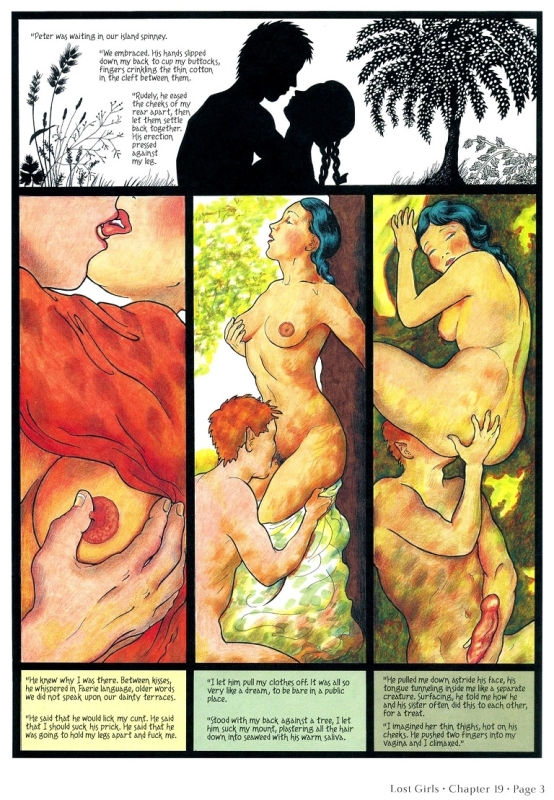 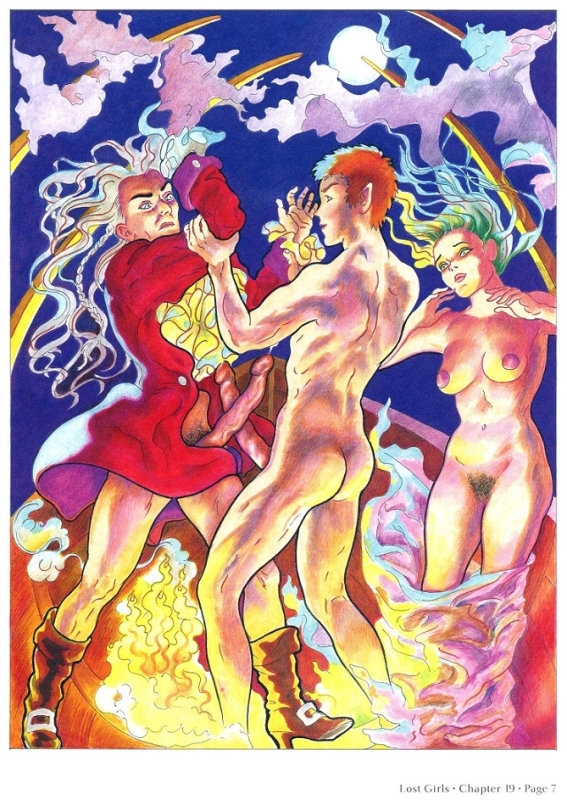 Click HERE for an article the magnificent shunga collection of the controversial Aubrey Beardsley....!!

Subscribe now to SG Premium and check out the extended version of this article with twice as much images!

Let us know your opinion on this article in the comment box below...!!

I have the full print of Lost Girls. It's an amazing piece of work. I'm going to have to revisit it.

Hi Paul. Yes, it's a work that is always worth reading again. It's one of Alan Moore's great works.

This is one of the best pieces I've read on this website so far. I love Lost Girls and I think I need to read it again!

Hi Jess. I think Alan Moore's work makes us always come back to it with another look. This is a characteristic of being a great writer.

Yes! I just finished reading it again, thanks to your article and the fresh perspective it gave me.

Thanks, Jess. Good to know my article was helpful to you.