The Eboshi hat (風折烏帽子) was first seen during the Japanese Heian period (794 to 1185). This type of hat was worn by men of all layers of population but was typically worn by aristocrats to reveal their type of rank and stature. The poorer and of less status the wearer of the hat the shorter the hat.was. This type of hat was also used during a samurai's ceremony in attaining manhood.

It’s a sort of (black lacquered) pointed black cloth (linen) hat with a shape that can be compared to a stocking cap. Although these hats where previously worn only by men to show a particular social status, today they are worn during certain ceremonial purposes, such as Shinto (original japanese religion) ceremonies, and by gyoji (a sumo wrestling referee) presiding over sumo matches. 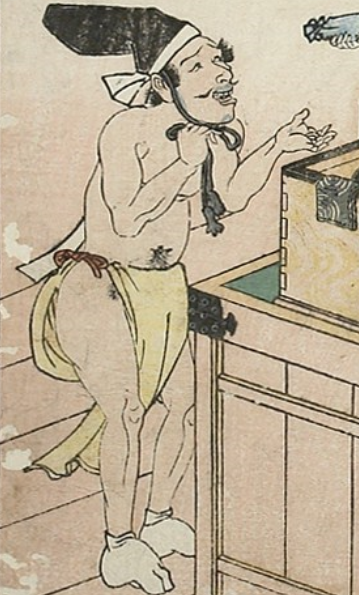 Under normal (casual) circumstances the soft eboshi hat was worn. But when noble men were attending more formal occasions the hat was often stiffened to give it a more noble appearance. This way the apperence was closer to a kanmuri which was worn by the Emperor of Japan but also Shinto priests. But stiffening the eboshi hat made it also very tall and impractical.
Place comment
Edit article Dashboard Settings Website Design Article cached on Wed. 1 Feb 17:16
Renew cache
We use cookies
To give you the best possible experience, we use cookies and similar technologies for performance, analysis and personalization to help the site function better to your needs. privacy policy
Only functional cookies
Accept all
Cookie instellingen
privacy policy
Voorkeuren opslaan