The shamisen is a Japanese instrument with three strings. It originates from China and is believed to have been introduced to Japan in the sixteenth century via the Riukiu Islands, an archipelago between Taiwan and Kyushu.

The shamisen has a rectangular sound box. The top is made of dog or cat skin. In traditional culture, shamisen is seen primarily as a women's instrument, but men also play it. He initially accompanied folk songs, but soon found a place in chamber music.

The shamisen is plucked with a large plectrum called bachi. The notes are formed by shortening the strings on the neck with the index finger and the thumb, and sometimes with the middle finger. There are other playing techniques, including the uchi technique, where the strings are not plucked with a plectrum, but with the fingers. 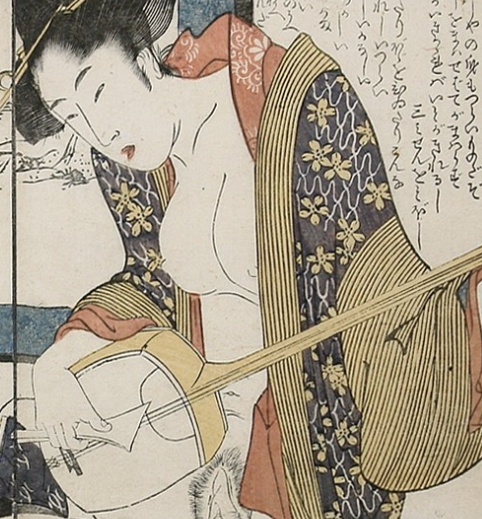 The timbre is an important aspect of the shamisen. For example, the construction method is aimed at allowing the strings to resonate for a long time. Only the second and third strings pass a bridge. The first string rests directly on the neck, giving it a distinctive buzzing sound. That so-called sawari sound is determined by the nature and tension of the string, and it requires a fine adjustment. Even when the second and third strings are played, the first string also vibrates. The timbre that is generated in this way would, among other things, be a reflection of the 'impure' natural sounds of water and wind. This aesthetic, in which the 'pure' sound of music is contrasted with the 'impure' sound of nature, can be explained by the importance that Japanese culture attaches to the experience of nature, and from a striving for symbiosis with nature, rather than domination.

The shamisen comes in different types. They are distinguished from each other by the width of the neck and the sound box, their weight, the thickness of the strings, and the shape and material of the comb and the plectrum. Each type is named after the width of the neck, and is associated with a specific style and repertoire: the futozao (thick neck) for a rather percussive style, the chuuzao (intermediate neck), mainly for the accompaniment of lyrical songs and for narrative styles, and the hosozao (fine neck) for a repertoire connected to the kabuki theater and the kouta (short folk songs).
Place comment
Edit article Dashboard Settings Website Design Article cached on Sun. 5 Feb 21:52
Renew cache
We use cookies
To give you the best possible experience, we use cookies and similar technologies for performance, analysis and personalization to help the site function better to your needs. privacy policy
Only functional cookies
Accept all
Cookie instellingen
privacy policy
Voorkeuren opslaan