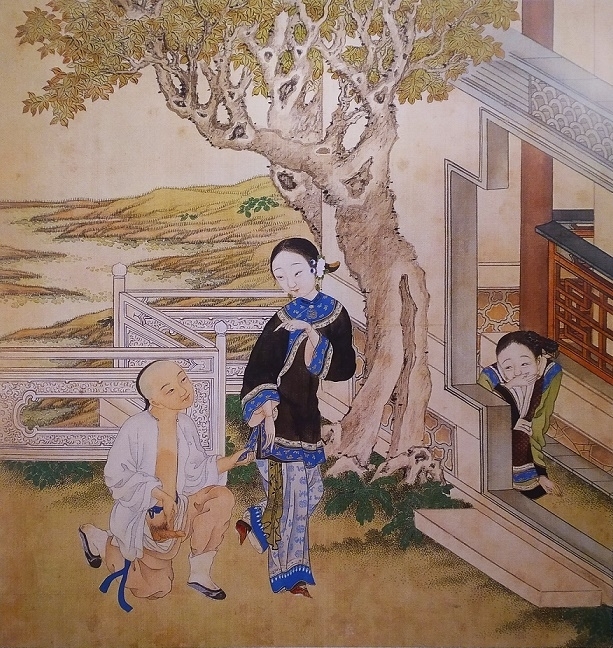 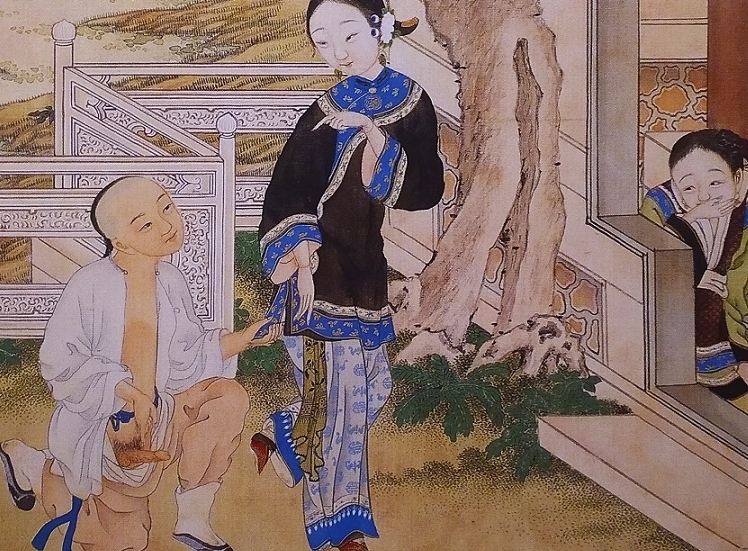 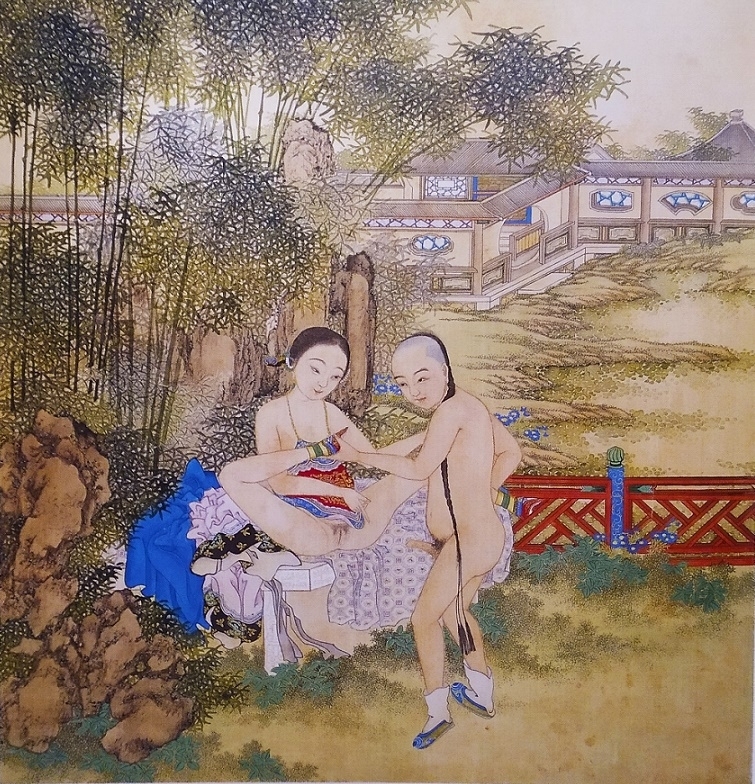 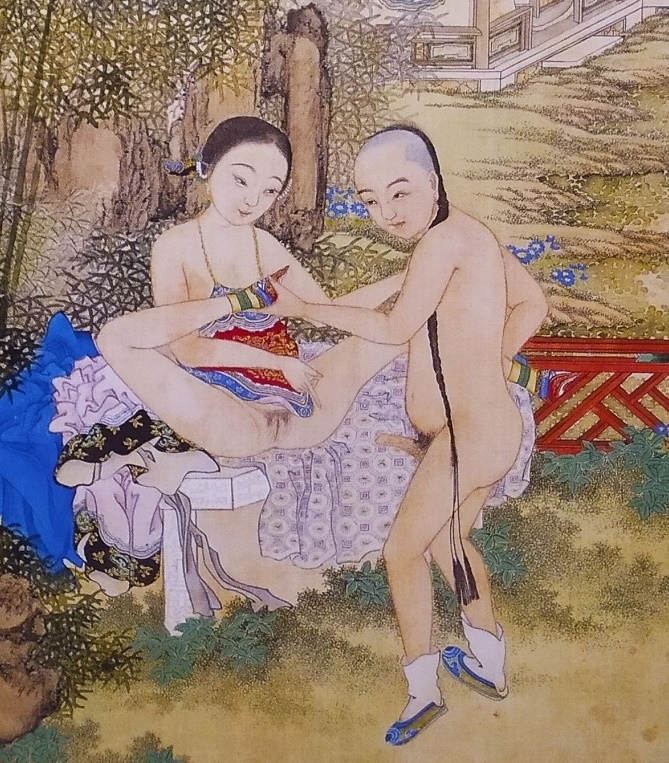 The artist makes frequent use of precious mineral paints. Special attention has been paid to the interior and natural environment. For example, in Figure 2 we see numerous miniature plants that are fabulously displayed. Every speck of moss is painted differently, no one is alike. The same applies to the representation of the 'wet-on-wet' gradations of the wisteria (Fig.5). The detail of various pots and vases in Fig.4 is so well done that we can trace exactly where and when the porcelain was manufactured. The framework in this image points to non-Chinese influences. 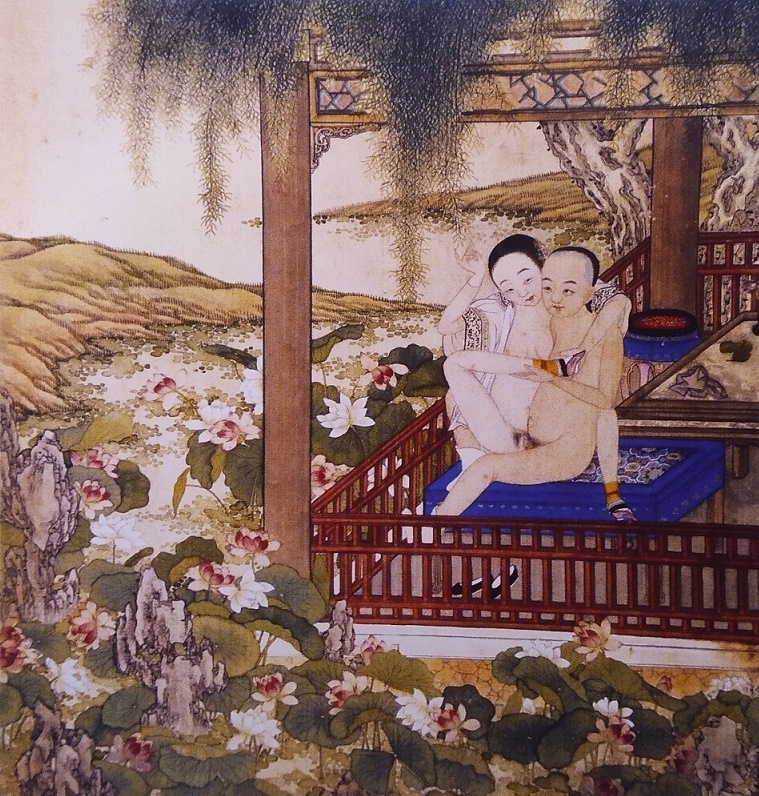 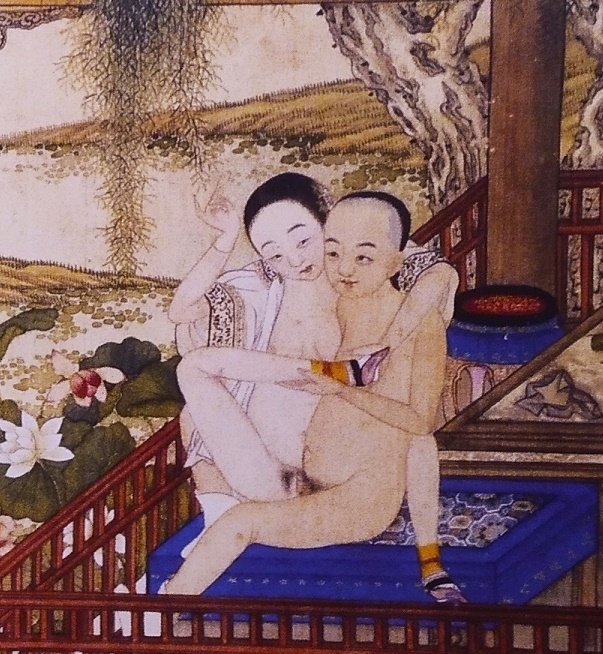 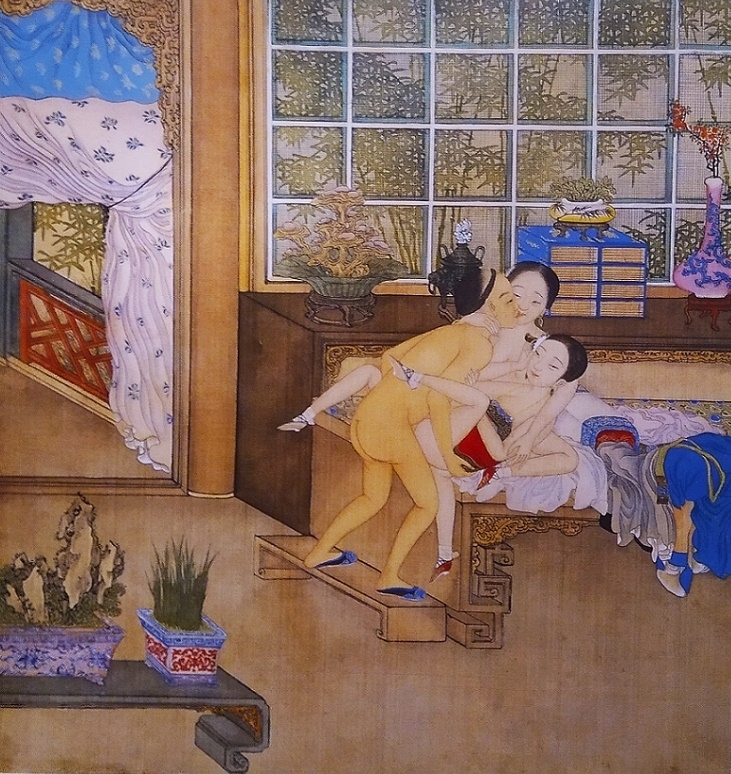 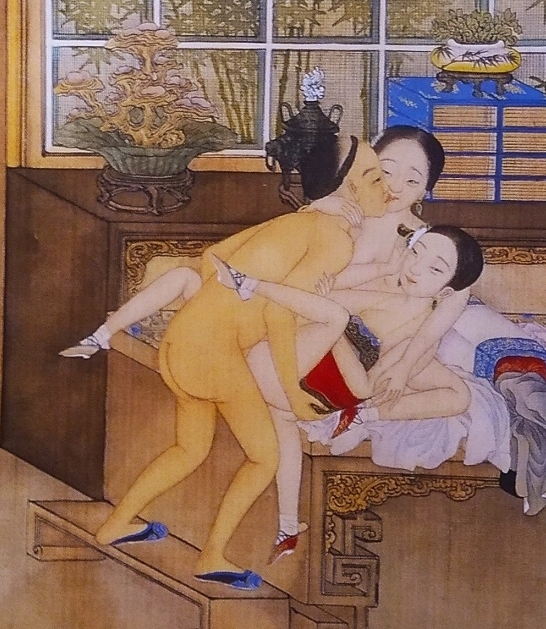 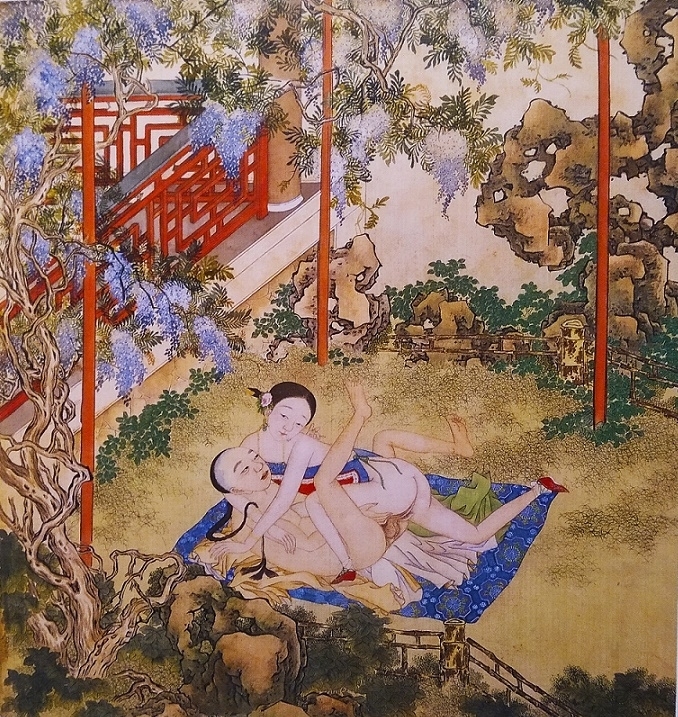 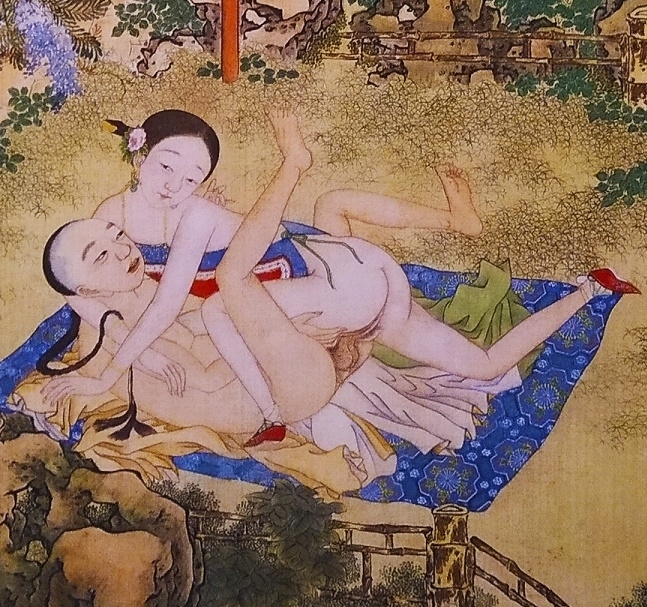 Presumably the scenes are set in the city of Suzhou, known to the Chinese as Paradise on Earth. Here the elite had exclusive courtyards where not only poetry sessions were held, but also the playing of the lute was practiced. As we saw before, they also formed an ideal environment for lovemaking. 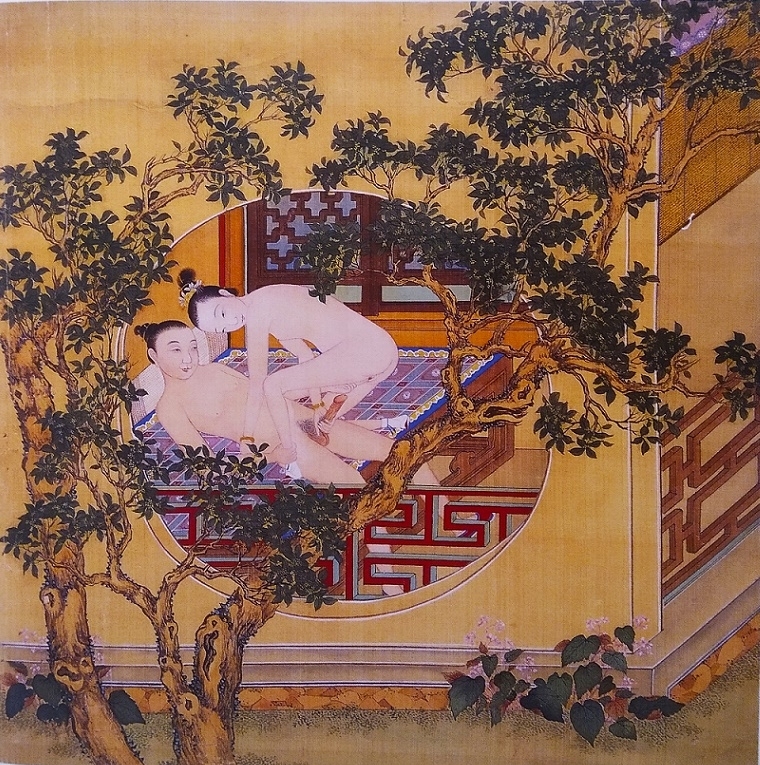 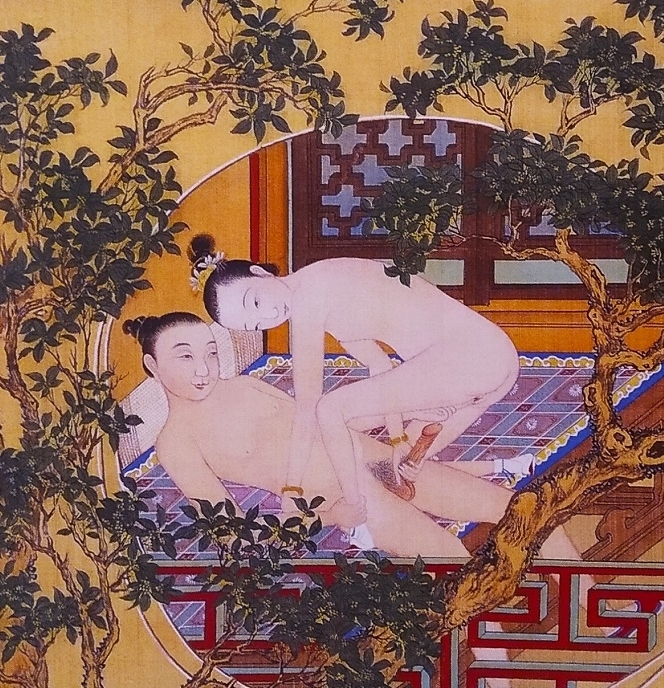 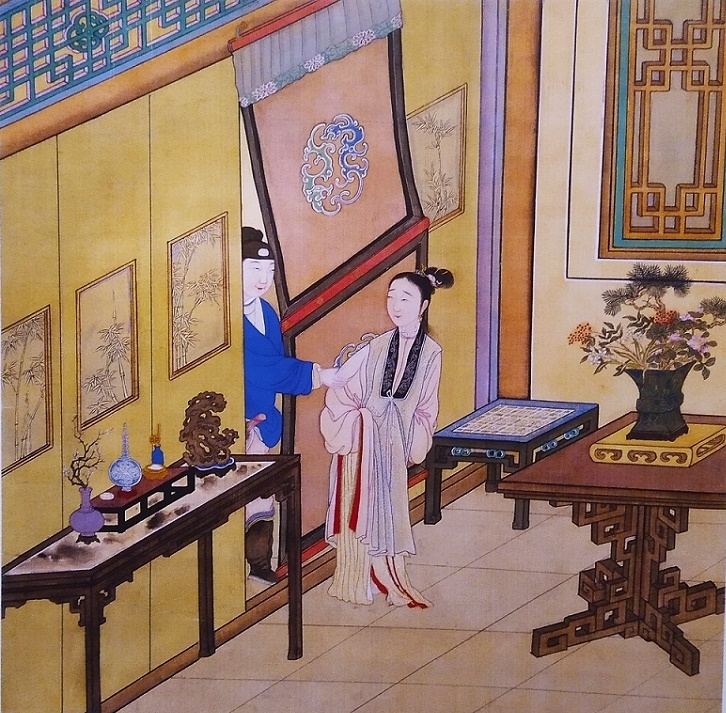 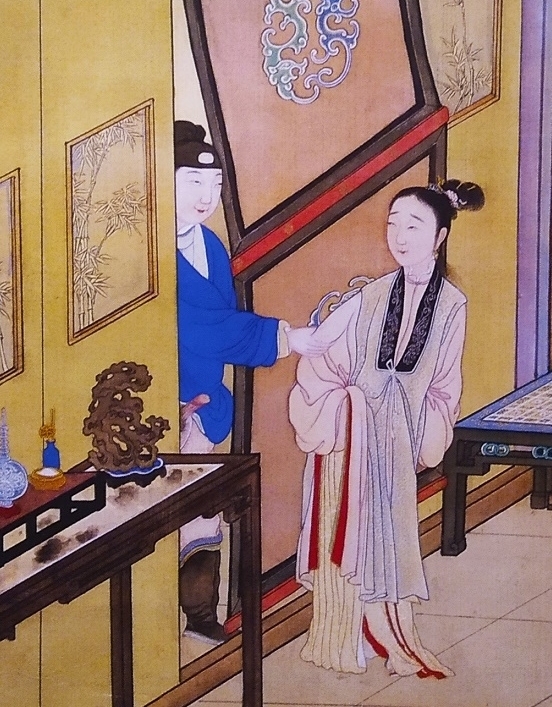 These three large paintings (from a series of twenty-four - Fig. 6, 7 and 8) of scenes from Yanqin Yiqing still have an acceptable quality. They are painted with care and precision and the compositions are solid.

Nevertheless, all kinds of negative trends can be observed. Female breasts that were previously hardly considered interesting are more pronounced and the male gender is also displayed much larger. The facial expression is less subtle, colors are no longer translucent, but hard and opaque. There is an excess of complete decorations, in short, the exterior has become more important than the content. 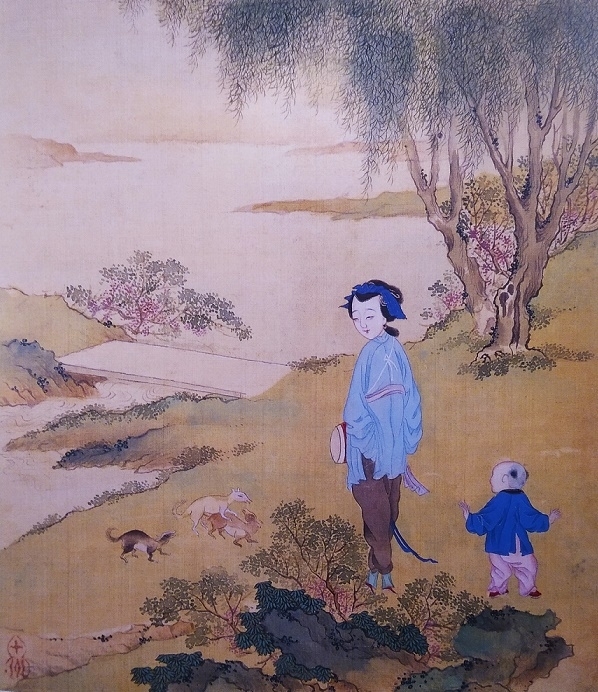 In this silk painting (Fig.9) from an album of twenty-four we see a rural scene of a woman taking a walk with her child along a stream. She is dressed in folkloric trousers and wearing a headscarf. The drum on her back suggests that she is a musician. She looks captivated at a couple of romping dogs. Apparently she got excited, both her hands have disappeared under the folds of her robe. It recalls the tranquil, poetic power of past dynasties. 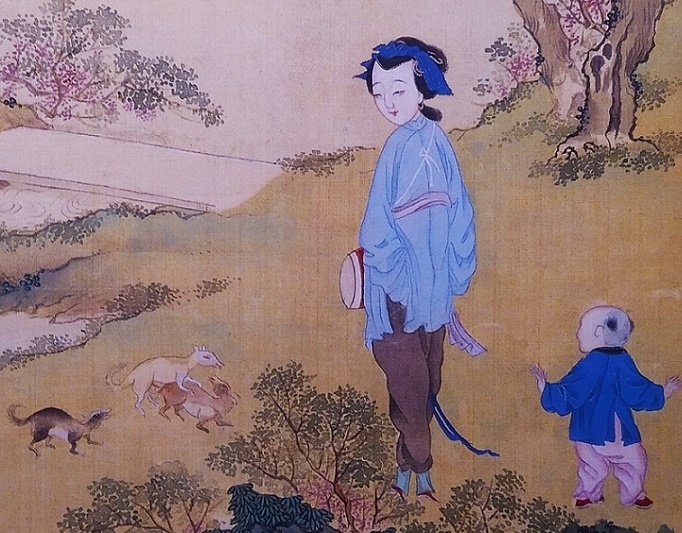 Click HERE for a complete 18th century Chinese album of 12 paintings on silk with intimate encounters...!!

*The Opium Wars were two conflicts fought in China in the mid-19th century between the forces of Western countries and of the Qing dynasty, which ruled China from 1644 to 1911/12.