“Erma flies through the night like a shadow, behind the wheel of her Jaguar. And everywhere she goes, from a chauffeur’s cafe to a red light district or a luxury villa, she leaves a trail of surprise and confusion in her wake. Is what she’s going through really true, or is it just a strange, exciting dream?” This is the swirling introduction of the mysterious character Erma Jaguar on the back cover of the Dutch edition of the eponymous comic book. 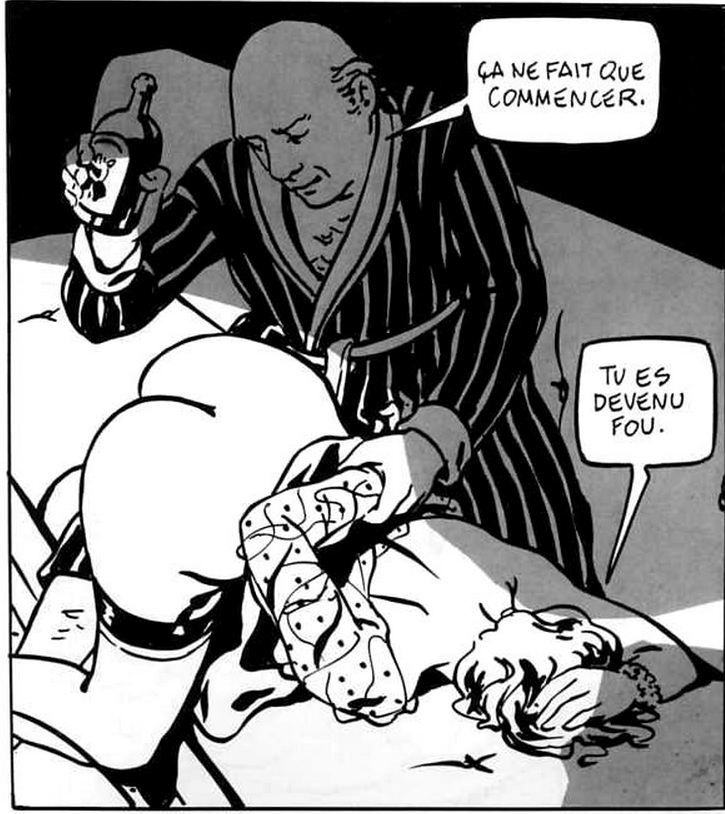 The creator of this successful comic (has two sequels) is the French artist and art teacher Alex Varenne (1939-2020). Initially Varenne had a lot of trouble getting his work published but when he finally succeeded his debut, the post-apocalyptic saga ‘Ardeur‘, in 1979 in Charlie Mensuel , was well received. In the eighties, Alex worked often in collaboration with his brother Daniel, which resulted in comics such as ‘L’Affaire Landscape‘, ‘Corps à Corps‘ and ‘Un Tueur Passe‘. They were renowned for creating exciting stories, adroitly mixing atmosphere, suspense, and sex. 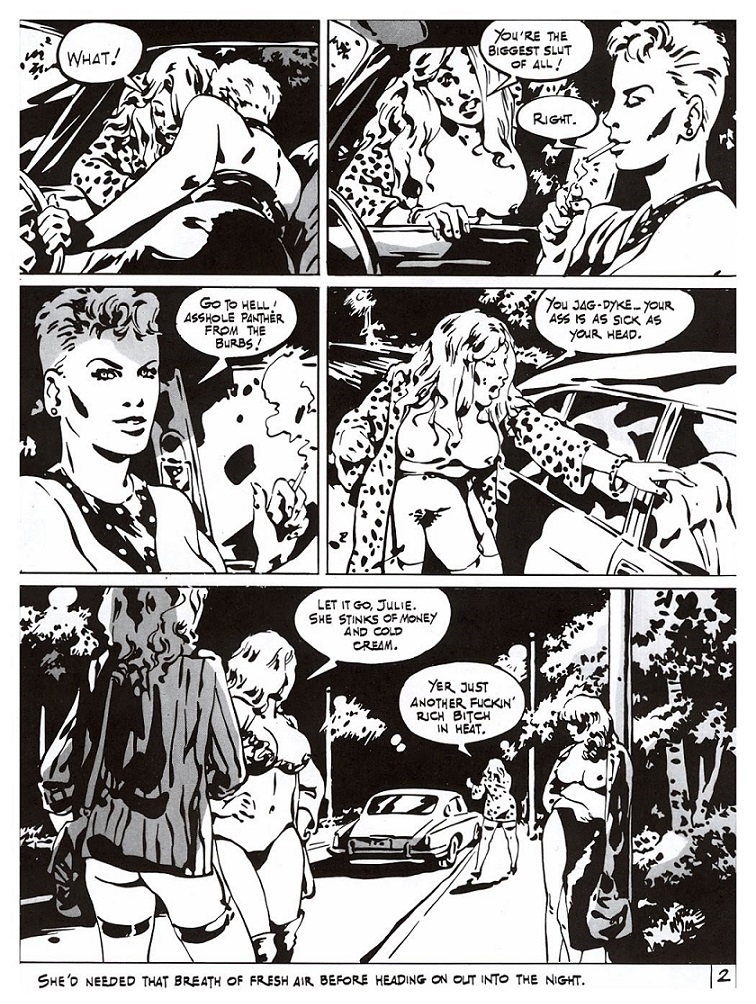 Varenne’s breakthrough came with the creation of the aforementioned female protagonist ‘Erma Jaguar‘ published in the daily newspaper Libération. Erma Jaguar is an examination of risky sex, the glamour of it and the possible backlashes. Erma is dominant and seductive, and the characters that cross her path vary from the virtuous, the hunter, the disreputable boyfriend, the elderly libertine to others whose appearance ideally matches her prevailing character trait. An allusion to Erma’s lack of sexual boundaries is made from the first page when she’s able to shock even a seasoned prostitute with a whispered suggestion of possible activity (Fig.2). The mood is strongly intensified by the heavy shadowing in order to allude to a black and white morality. 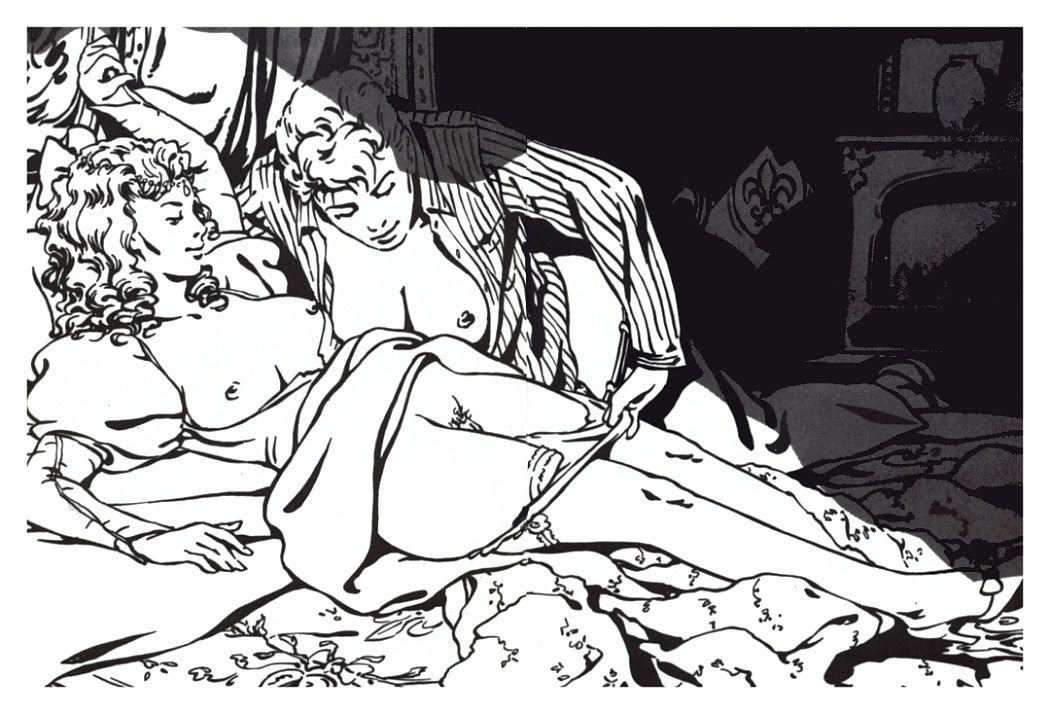 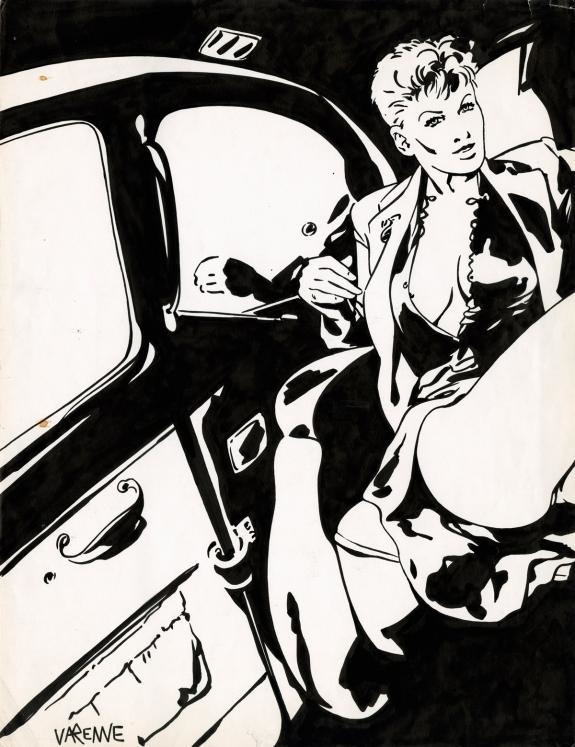 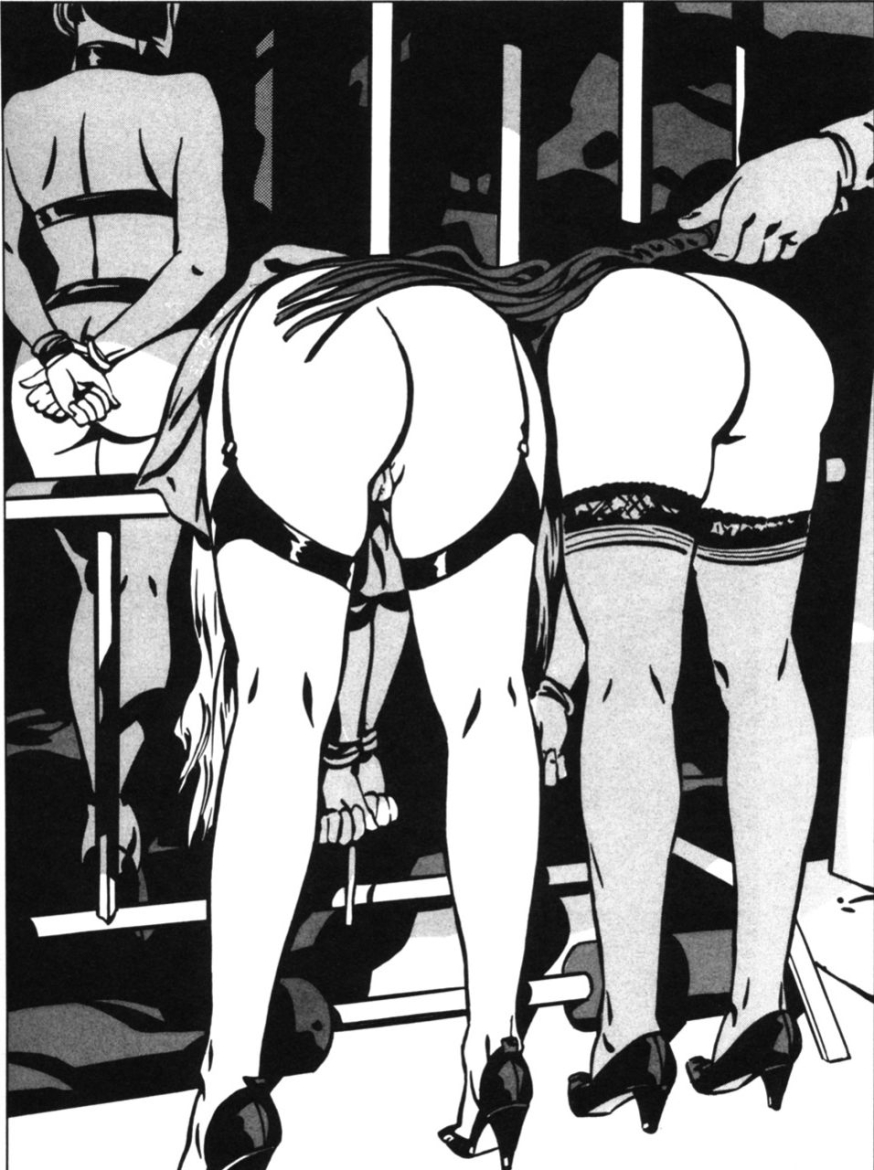 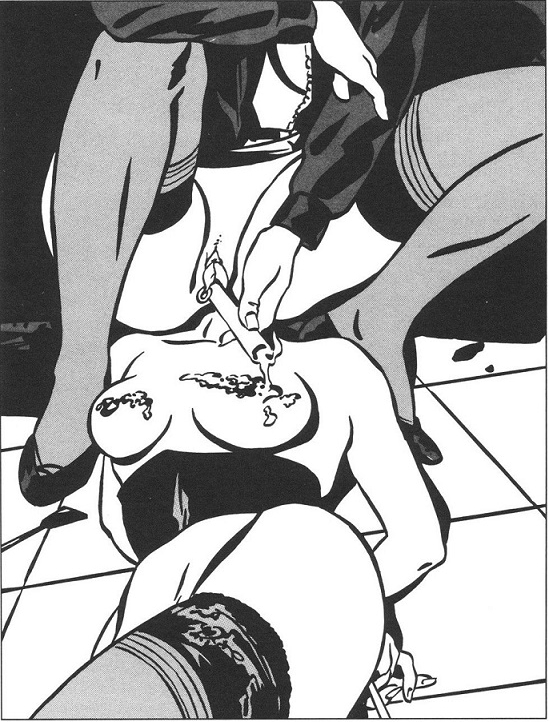 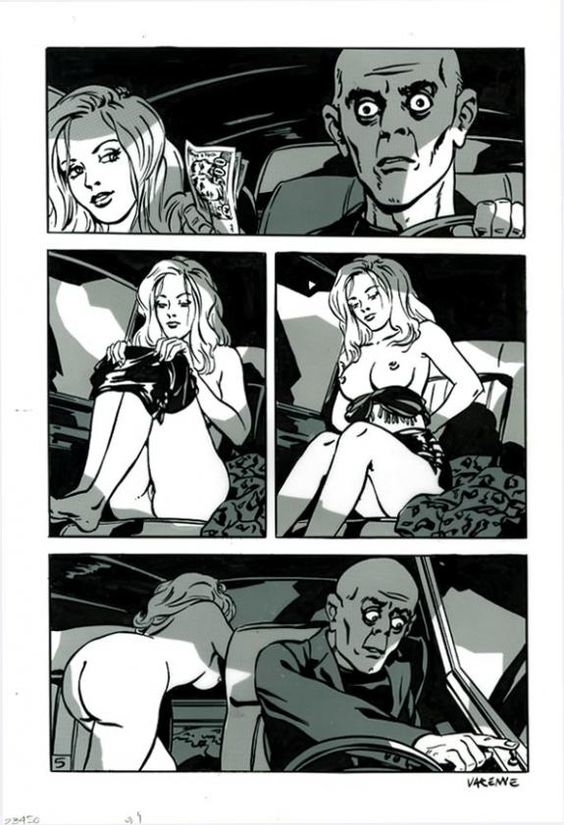 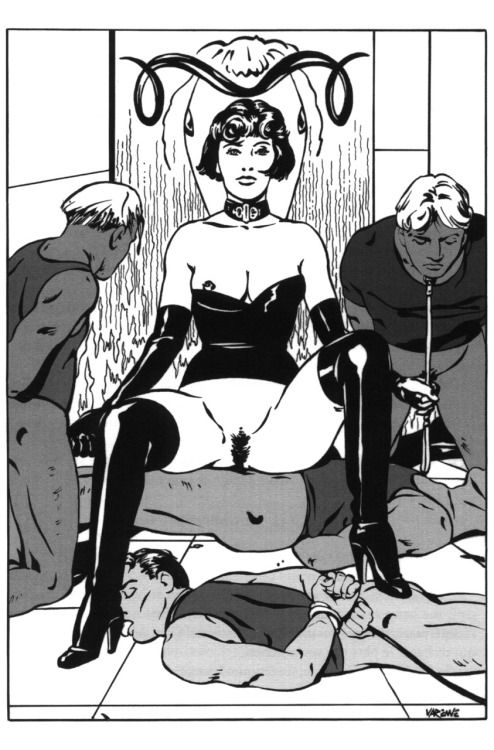 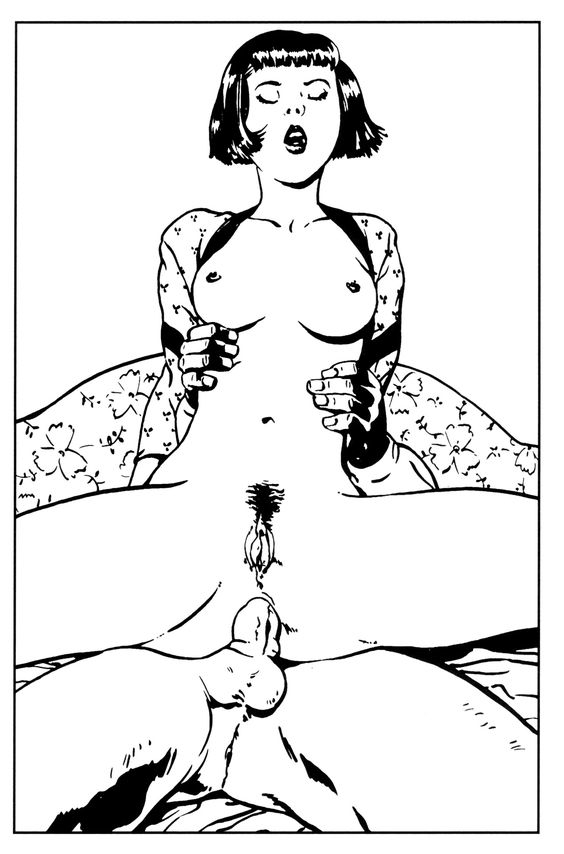 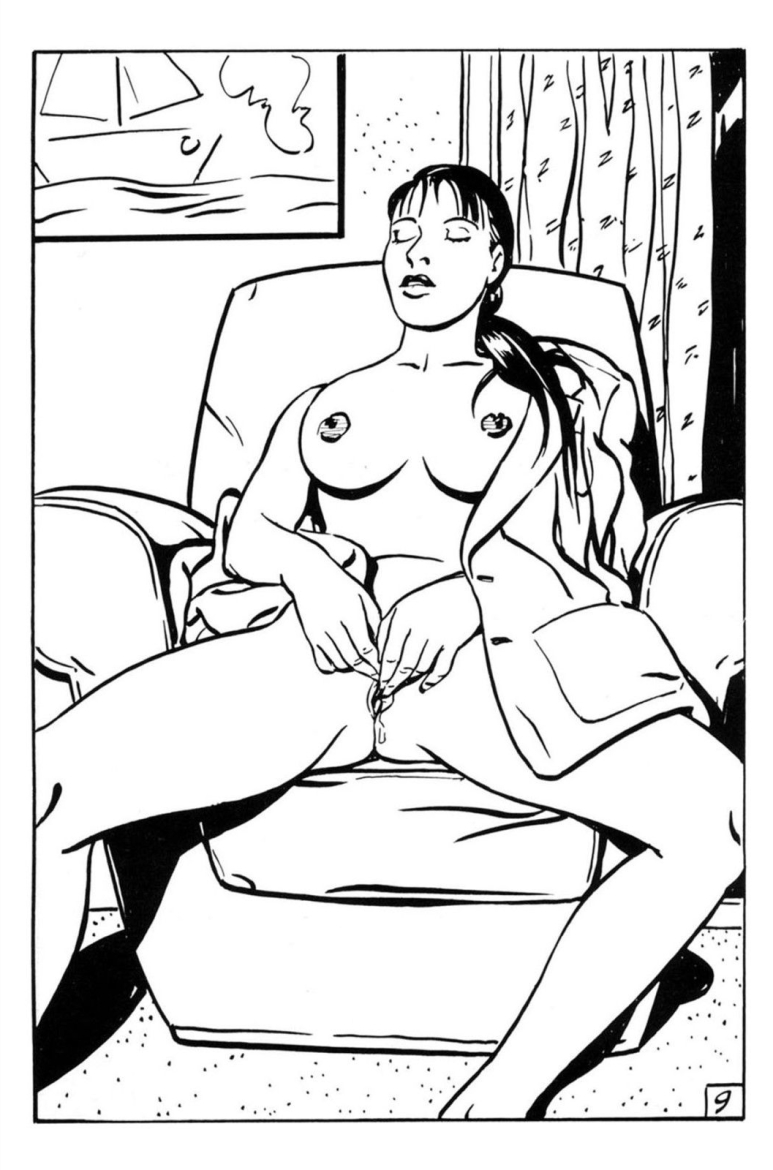 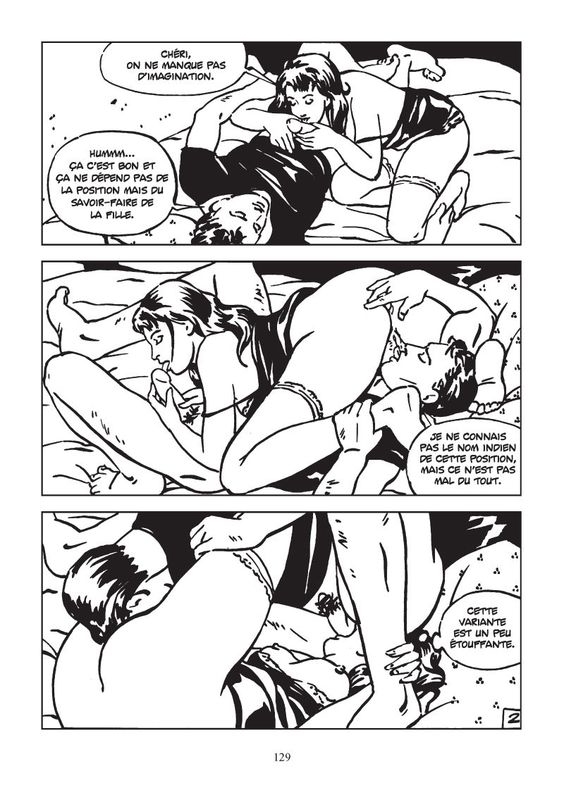 Fig.12. Text 1st image. Female: ‘Honey, we have no shortage of imagination.‘ Male: ‘Hmm … that’s good and it doesn’t depend on the position but on the girl’s know-how.‘ Text 2nd image. Male: ‘I don’t know the Indian name for this position, but it’s not bad at all.‘ Text 3rd image. Female: ‘This variant is a bit overwhelming.‘ 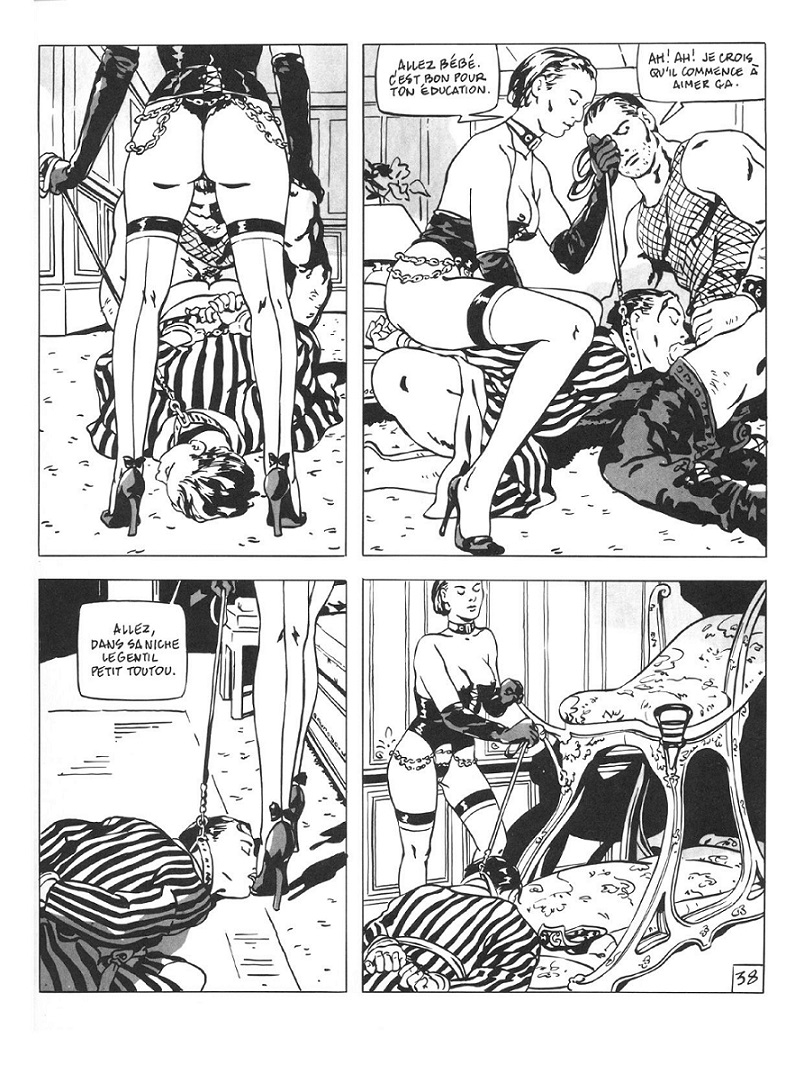 Fig.13. Text image above right. Erma: ‘Go Baby…This is good for your education.’ Male: ‘Ah ah I see he starts to like it.‘ Text image below left. Erma: ‘Go, in his doghouse, cute little doggie.’ 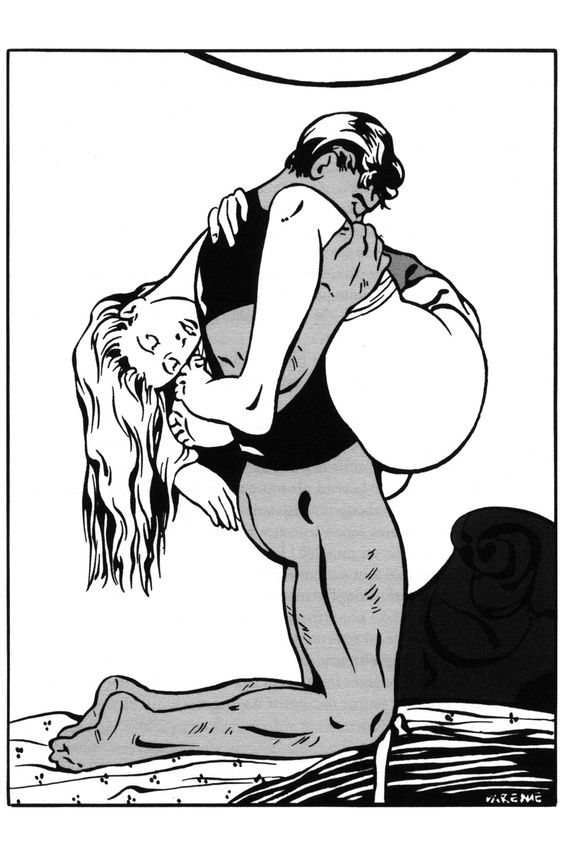 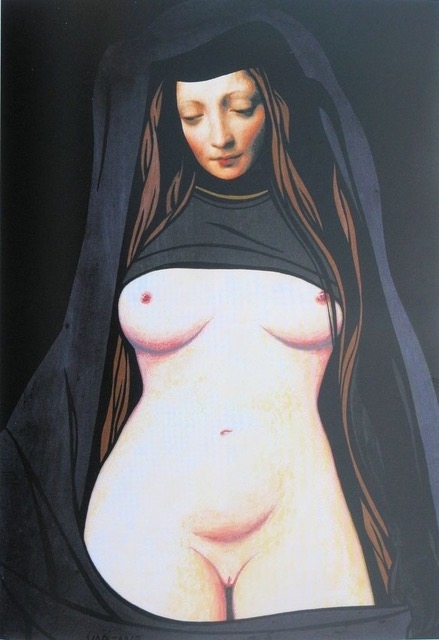 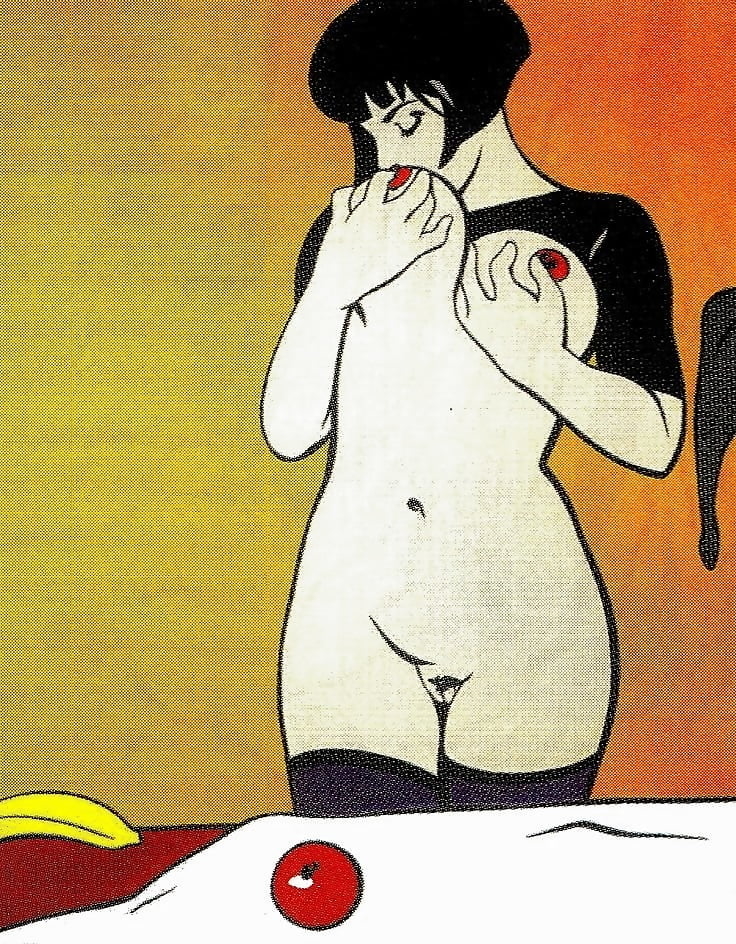 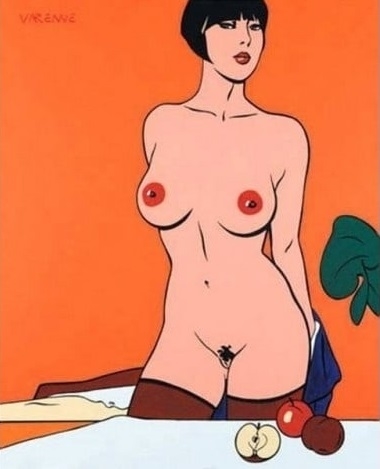 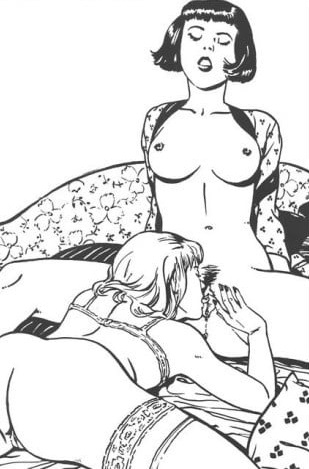 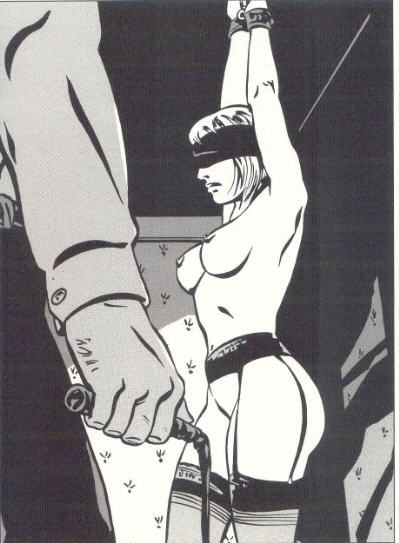 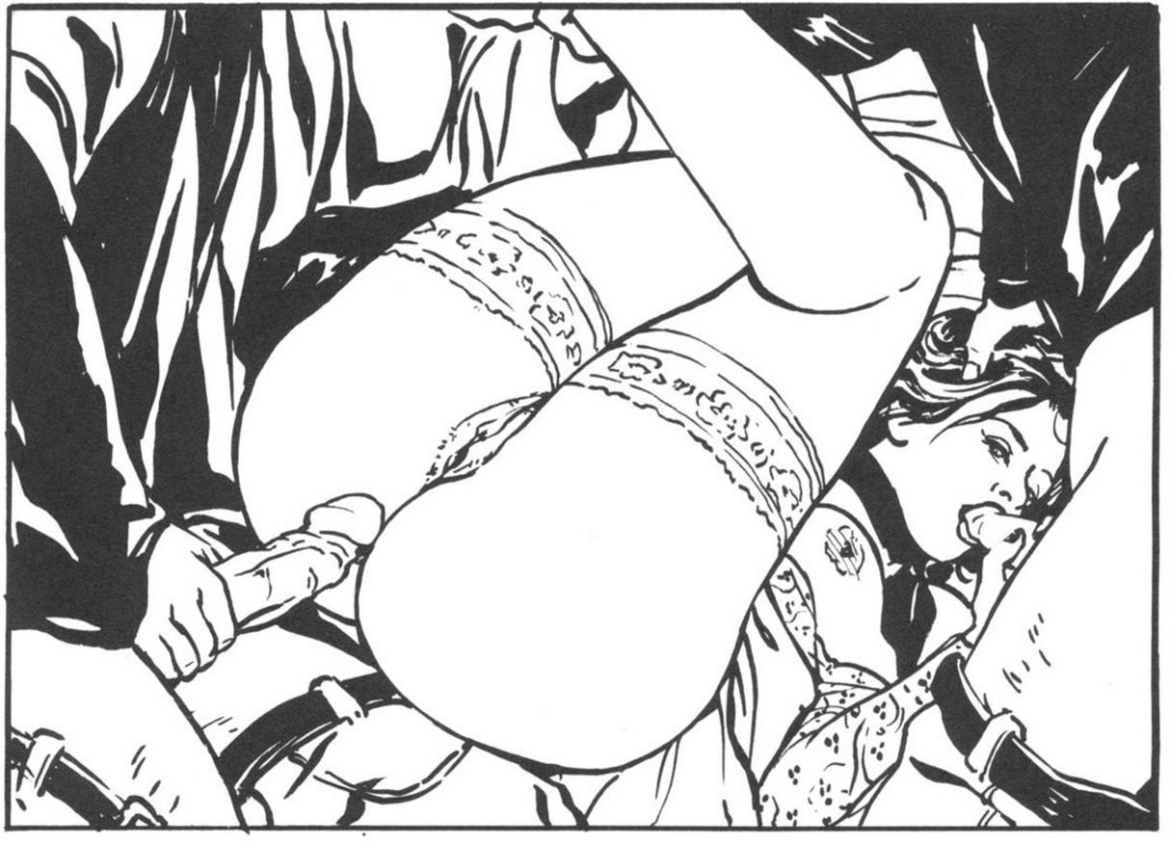 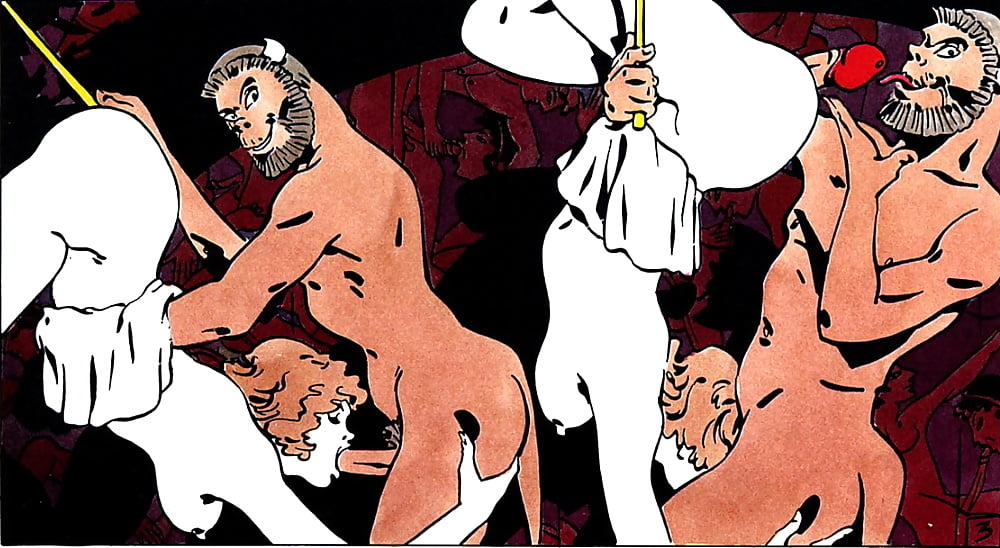 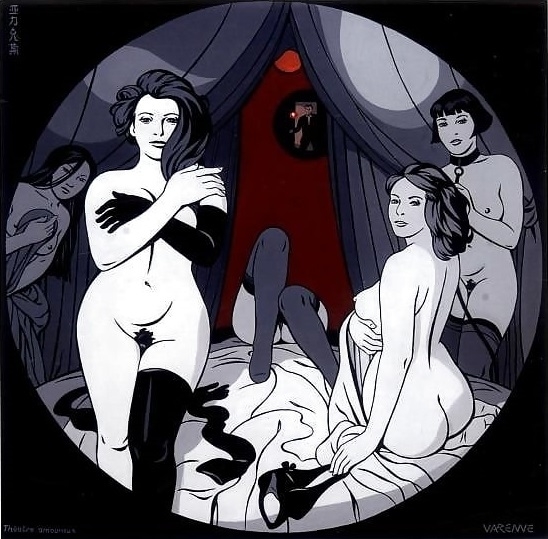 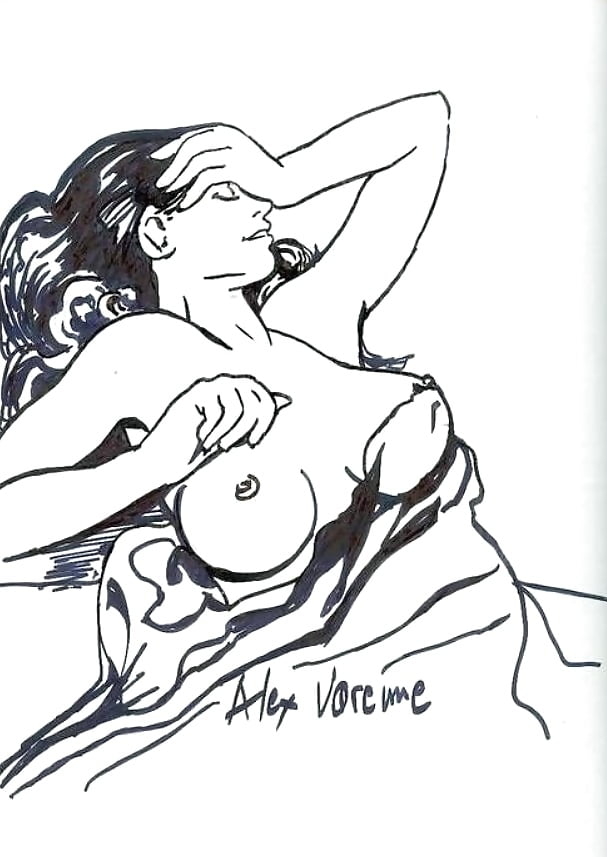 Click HERE for the adult comic art of Richard Corben…!!

You can read Issue 1 & 2 of the Erma Jaguar series online for free by clicking HERE…!!

This topic was suggested by our member Claude S.

Let us know your thoughts on Alex Varenne’s comic art in the comment box below…!!