The ukiyo-e genius Katsushika Hokusai (1760-1849) is by far the most widely known of all Japanese artists. There are several factors that contributed to his stardom. One of them was the publication in 1896 of Edmond de Concourt’s intense monography Hokousai (published the same year as Michel Revon’s Etude sur Hoksai‘).

Another major aspect was off course his ‘pictorial testament’ propagated by means of his ground-breaking ‘One Hundred Views of Mount Fuji‘ (1834-1849). These landscape designs had a enormous impact on the principles of the impressionists, especially Vincent van Gogh. The third factor was Hokusai’s famous Manga, a book series consisting of 13 volumes (plus two posthumous ones) published between 1814 and 1878. The sketches portrayed in this set demonstrate his unlimited creativity and detailed virtuosity.

After his master’s death in 1795, Hokusai left and adopted the prestigious Tawaraya studio. At that time the studio was somewhat in decline but he soon developed his own aesthetic ideal. He introduced the elongated human figure and assumed a pictorial language that was both otherworldly and infused with a mood of languorous melancholy.

Supplementary to, Hokusai also created albums of oban-sized prints such as ‘Models of Loving Couples (Ehon tsuhi no hinagata)‘. The colors in this album are vivid, yet refined and the compositions are often powerful with less obtrusive text than in his smaller books. His most important work of this period was ‘Fukujuso (The Adonis Plant)‘. It was published between 1815 and 1817 in various editions and in this series Hokusai concentrated to a greater extent on imposing figures and huge compositions, filling each sheet all the way to its frame, and sometimes even beyond it. There’s also a recarved edition (with deleted text and with a mica background) of this series called ‘Plovers Above the Waves (Namichidori)‘. A lesser known oban series is ‘Brocades of the East (Azuma nishiki)‘ from 1812.

‘Intimate couple on boat ‘ (c.1814) from the series ‘Kinoe no komatsu (Languishing for Love aka Young Pine Saplings)‘

All the above Hokusai prints are available in our gallery! 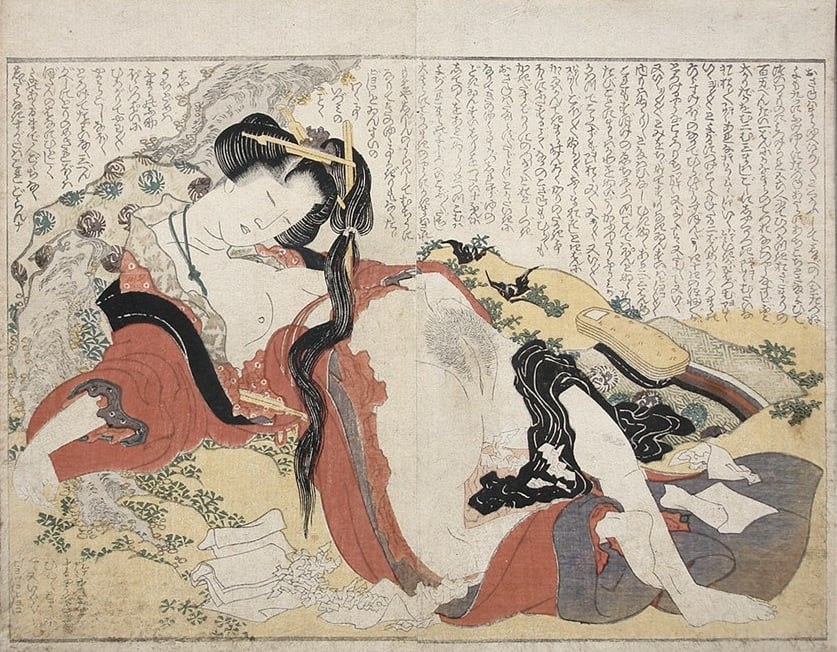 Thanks for referring to our site! A fascinating discussion indeed!