We're thrilled and honored to be joined by the eminent and award-winning graphic artist John Coulthart (1962). In our conversation with the Englishman we discuss, among other things, his background, views on art, influences, censorship, shunga, his voluminous graphic novel series Reverbstorm, intriguing feuilleton, and his favorite films. Also included are unique images of homoerotic work* that has not been published before (Fig.4 and 5). 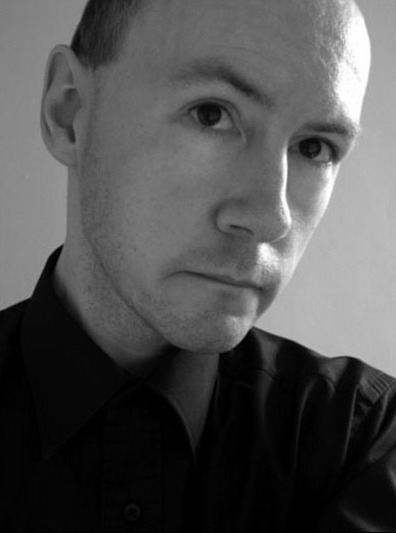 -- What can you tell about your background?

I grew up in the North of England on the outskirts of Blackpool, a declining seaside resort. To outsiders, the town has many exotic features--three piers, a huge funfair, one of Britain's oldest tram systems, a half-size pastiche of the Eiffel Tower--but the place can also be tawdry and grim. Seaside resorts in winter are notoriously bleak and cheerless places, emptied of the people that fill them during the summer.

I left school at 17 after an average education. Everyone was urging me to go to art school but the last few years at school had been increasingly awful, and I didn't want to spend any time in further education. I'd realised early on that success in art depends on the quality of the work you do, not on your education credentials. Art schools are obviously valuable for some, especially those who require guidance or a space to experiment while they find a sense of direction. I preferred to be left alone to find my own way. 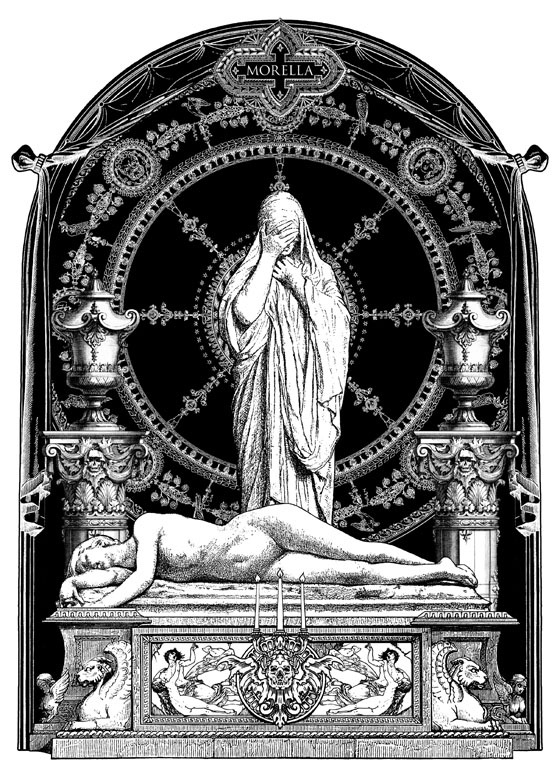 -- Do you think art has to be subversive? Are you looking for it in your art?

Art is the one area of human activity where anything goes, so everything should be possible. Some of the available choices for an artist will be subversive ones depending on the social constraints of the time or the place where the artist lives. But I wouldn't regard this as a prerequisite, just as I wouldn't regard any other potential artistic choice to be a prerequisite. One thing to bear in mind about subversion is that any subversive qualities often diminish when public tastes or attitudes change; subversion can also be a limitation if it requires a specific context to be fully appreciated. Satire, which is often subversive, is especially prone to falling flat or even being incomprehensible with the passage of time.

With my own art I think I'm more interested in occasionally subverting expectations rather than being subversive in an overtly political sense. 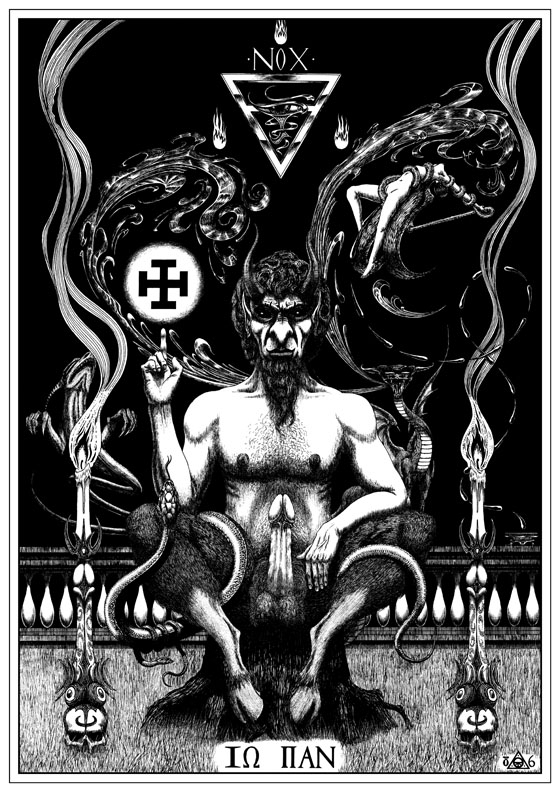 -- Have you ever had any experience with censorship?

Yes, in 1995 when one of the comics I drew for Savoy Books' Lord Horror series was declared obscene in a court of law, with the result that copies seized by the police were then destroyed. The prosecution was the tail end of a long-running conflict between Savoy and the Greater Manchester Police, a force who gained a reputation in the 1970s and 80s for being unduly punitive towards shops selling what they considered to be offensive publications. As well as being book publishers, Savoy ran a small number of bookshops which were caught up in a city-wide moral crusade driven by a very religious chief constable, a man whose beliefs fuelled his mission to clamp down on pornography, homosexuality, and what he saw as "left-wing subversion". The police actions targeted small newsagents and any independent bookshops that sold soft-porn magazines, erotic paperbacks, drug books or similar literature. The raids lasted for many years, from the late 1970s to the mid-90s, so when Savoy started publishing their own comics in the late 1980s these titles were seized as well. My comic was the final issue in a five-part series presenting an alternative history of the events of the Second World War, ending in the Nazi death camps. The police didn't know what to make of this other than deciding that it was "harmful" and shouldn't be on sale. The attitude was that comics were for children alone, with the suggestion that we were somehow trying to turn children into tiny fascists, when it was the police themselves who were repeating the actions of historical fascists by seizing and destroying printed material. 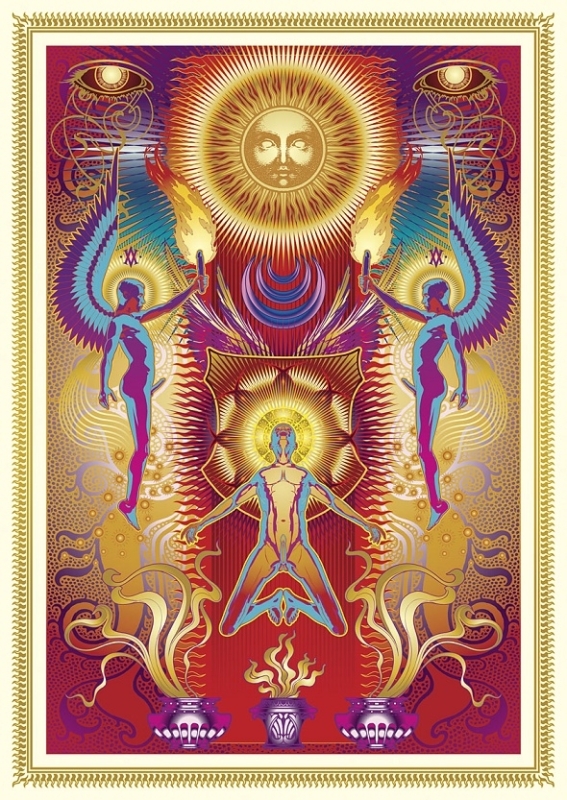 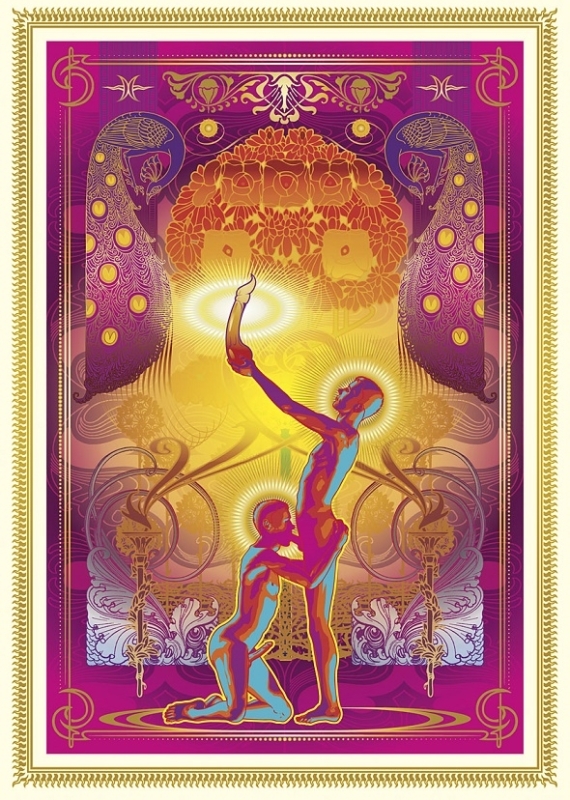 -- I saw on your feuilleton that you sometimes pay attention to ukiyo-e.  Are you also familiar with the shunga genre? If so, what do you think about this art form? 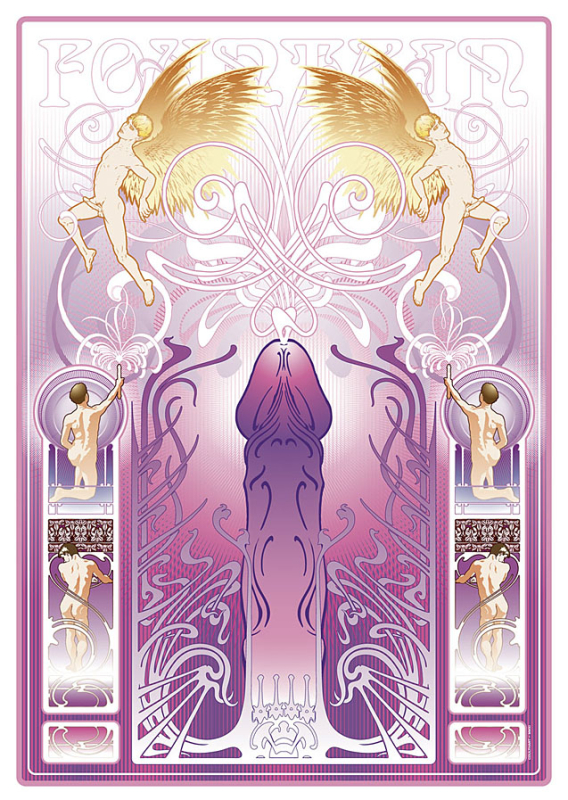 -- What is the idea behind your blogging diary that you have been keeping since 2006?

I started it mainly as an experiment to see what I could do with the form myself. I'd initially dismissed the blog format as being of little interest since all the blogs I'd seen were mostly diaries that weren't saying much of interest. I changed my mind when I encountered places like BibliOdyssey and BLDG BLOG, two sites devoted to art/architecture that showed how you could explore cultural subjects in a succinct, direct and personal manner without writing long essays. In 2005 I was asked to help design a website for a small dance company for which I installed a database and a WordPress blog to enable them to post brief news updates. After seeing how easy it was to set up WordPress I decided to do the same for myself. 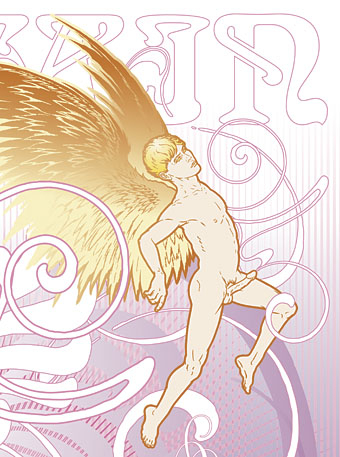 The blog (or journal, as I prefer to call it, since "blog" is one of those dumb neologisms we're stuck with) serves a number of purposes. It's obviously useful for providing a space where I can discuss recent work. I also use it as a place to talk about anything that I find of interest that may also interest other people. I've spent most of my life saying to people "if you like this then maybe you should try this as well", where "this" may be a book, record, film, painting, etc. The weblog form is a good one because it's so flexible. During the first ten years I managed to post something almost every single day. On occasion I'd be too busy for anything detailed so I'd simply post a picture or a quick link to YouTube or something. At other times I've written lengthy essays (not all in one go, I usually chip away at these things over several days). Some posts are simply lists of things with a connecting theme; quite a few of these are collections of work by artists who seem to have been overlooked. An early post about artist and music designer Barney Bubbles was like this, an attempt to fill in the absence of information about his life and work by gathering together a collection of his record covers and posters. This proved to be surprisingly popular. The post received a huge amount of comments from design professionals and people who'd known Bubbles while he was alive, and the discussion eventually led to the first book of his work being published. This was even more surprising, and not something I anticipated at all. 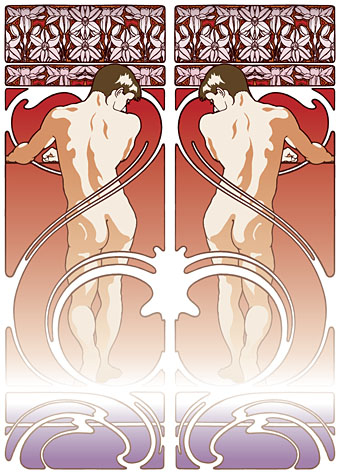 Having stuck with the blog for this long (the first post was in February 2006) it's been amusing watching people abandon blogs for social media then, after realising the shortcomings of the form, start gravitating to Medium and Substack. Even though many of them are doing this to try and make some money (or more money) from their writing, it shows that there's still a demand for long-form discussion that social media isn't providing. And with social media showing itself to be increasingly poisonous I've come to value having an online space of my own over which I have complete control.

-- Is there a work of art (eg painting, film, sculpture) that has made a decisive impression on you?

Getting hold of the first book of Roger Dean's artwork, Views (Fig.7), when I was 14 was a decisive moment because it made me want to do what he'd been doing, illustrating album covers and book covers. I'd visited the Tate Gallery for the first time the year before, and while I was thrilled to see so many exceptional paintings and sculptures in one place being there didn't make me want to try and be that kind of artist. Dean's book was important because it described how he came to have a career connected to popular culture; I wanted to be doing the same, not making work for collectors or galleries. I subsequently bought many of the books that Dean published later under his own Dragon's Dream and Paper Tiger imprint, all of which were showcases for the work of different illustrators. These books were important as well, some of them were much closer to my own artistic temperament, but Dean's book was the first that opened my eyes to the possibilities of being an illustrator. 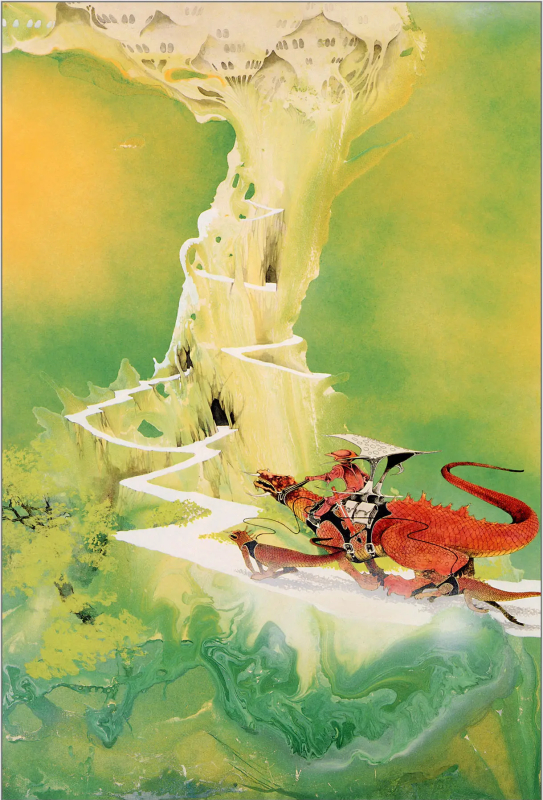 -- What can you tell about your extensive graphic novel series Reverbstorm ?

Reverbstorm was an eight-part Lord Horror series (Fig.8 and 12), written by Lord Horror's creator, David Britton. Seven issues were published as separate comics, with the eighth issue forming the end of the Reverbstorm book which was published in 2013. I wrote a lengthy introduction to the series here which gives the best explanation of the story, such as it is. Briefly, the book is an attempt to examine some of the interconnections between Modernism as an artistic movement and fascism in the 20th century. The idiom is a fantasmagoric one which attempts to be a Modernist work in itself, in the sense that it's left to the reader to piece together an accumulation of narrative fragments and cultural references. The Waste Land and Finnegans Wake are referred to throughout the book (James Joyce is one of the characters), and those works also guided its conception. 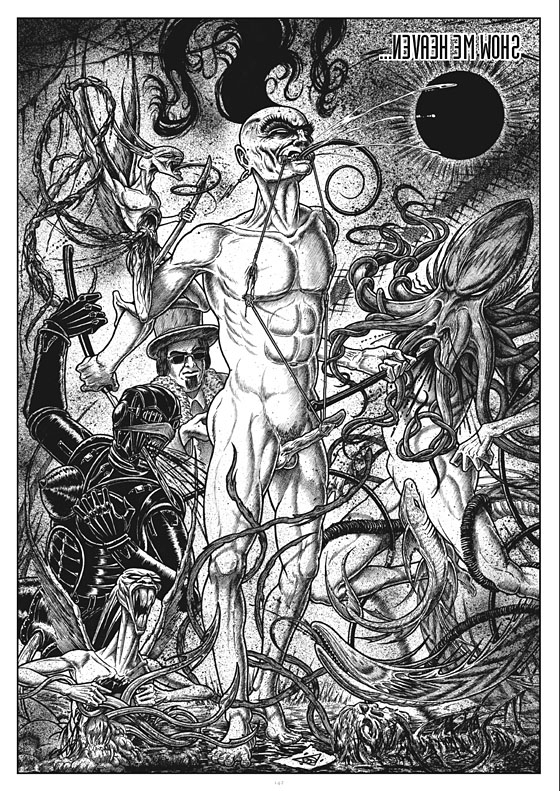 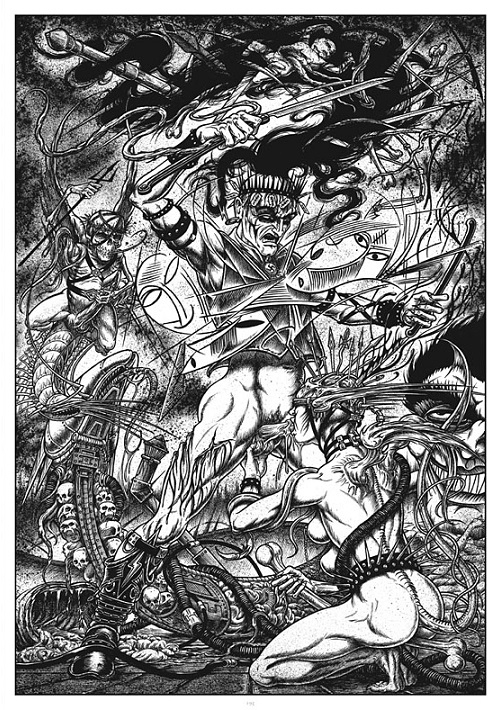 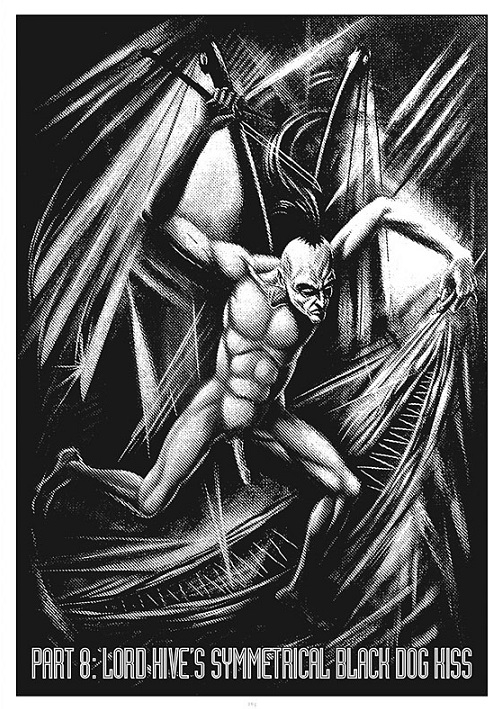 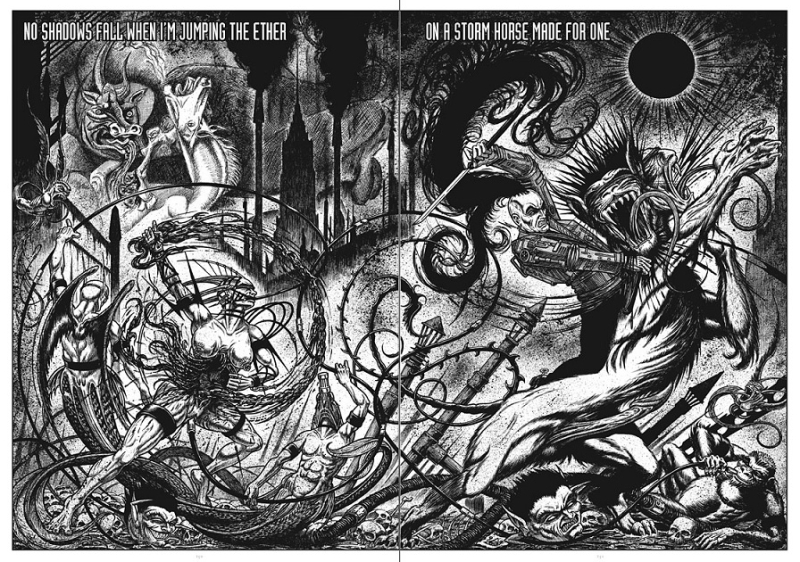 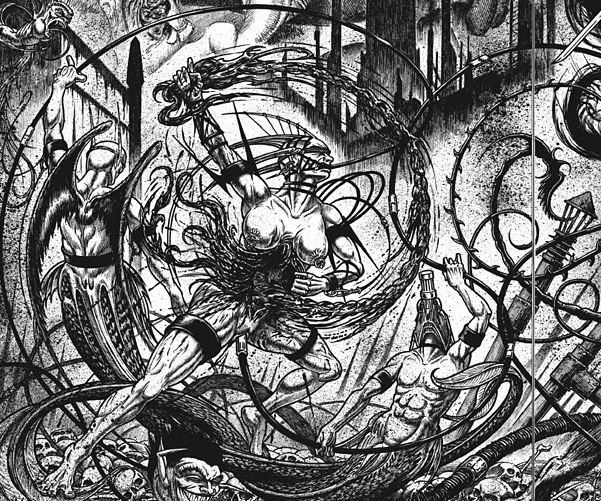 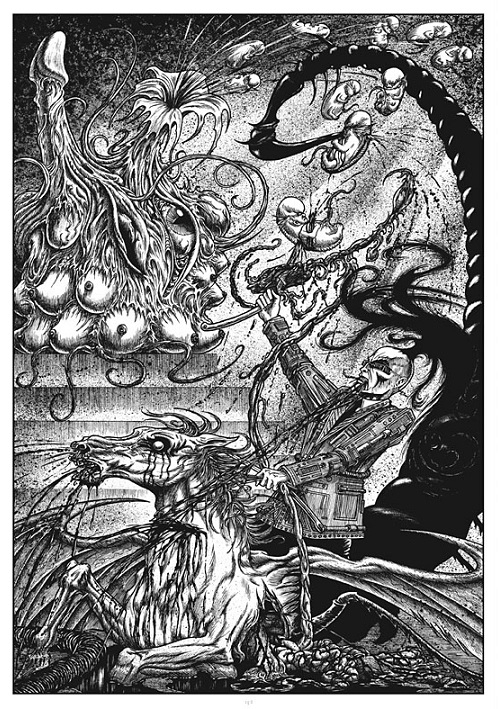 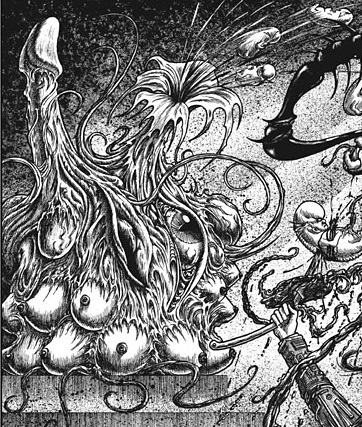 -- What is your favorite film?

I like cinema too much to ever select one film as an absolute favorite. But there are a handful of films I feel cultish about--Magick Lantern Cycle (Kenneth Anger, 1947--1981), Once Upon a Time in the West (Sergio Leone, 1968), Performance (Donald Cammell & Nicolas Roeg, 1970), Stalker (Andrei Tarkovsky, 1979), L'Ange (Patrick Bokanowski, 1982)--plus a number of directors whose films I never tire of watching: The Quay Brothers, David Lynch, Sergei Parajanov, Michael Powell, Orson Welles.

We want to thank John for sharing his nice insights with us. The best way to get acquainted with the artist's work (both textually and visually) is to visit his blog and/or become a member.

Click HERE for our interview with the German surrealist Michael Hutter....!!

* I've created a few homoerotic pieces of my own, and would like to create more but I seldom have the time when commercial work is keeping me busy. A couple of years ago I started work on a series of pictures based on the Splendor Solis series of alchemical paintings. My idea was to recreate these as homoerotic psychedelic art, the kind of thing you might have seen in the early 1970s if the art of the period wasn't so exclusively hetero. The problem with this project was the one that bedevils most of the art I produce for myself, creating things like this takes time when I don't have much free time to spare. I've attached the two completed pieces (Fig.4 and 5) from the series. I'd made a start on a third piece and still have plans to resume work on this when I find a spare moment.

Let us know your thoughts on the interview and/or your opinion on John Coulthart's art in the comment box below...!!