Luis Ricardo Falero (1851-1896), the Duke of Labranzano, manifested himself as a chemist, engineer, and seducer, but first and foremost, he was a painter. His images depict fairies, stars, planets, and witches as voluptuous naked women. As Alfred Trumble wrote, "His finely framed head, black eyes, fiery expression, and the fashion in which he wears his hair and points his beard, render him even to this day rather a figure from a canvas by Velasquez than a man of the life around him." The artist's manner and medium (oil on canvas) make him similar to William Bouguereau (1825-1905). At the same time, the content of the paintings is more common to Felicien Rops (Fig. 8) and lascivious Art Deco advertisements (Fig. 2, 3). 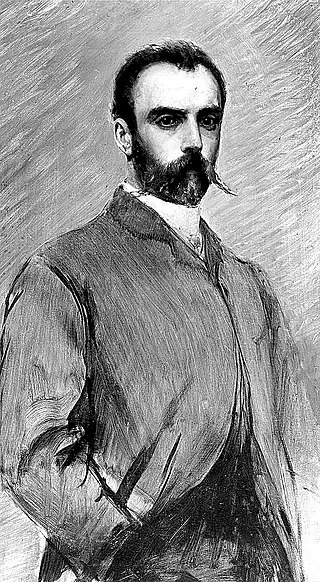 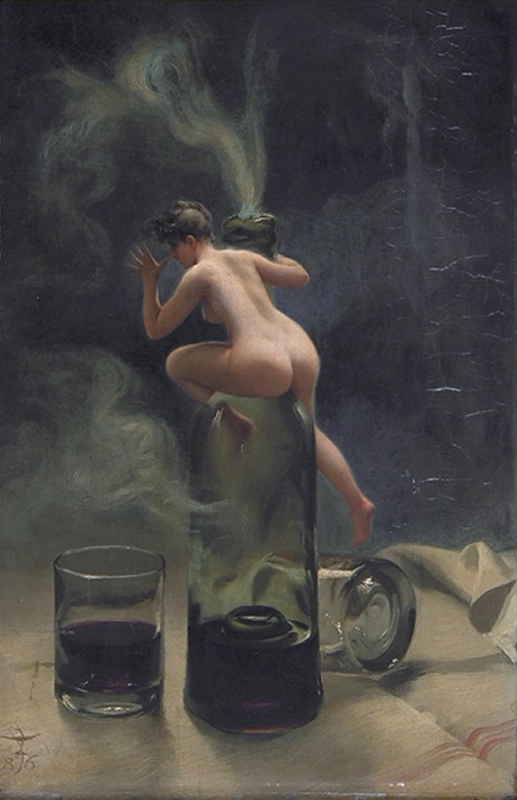 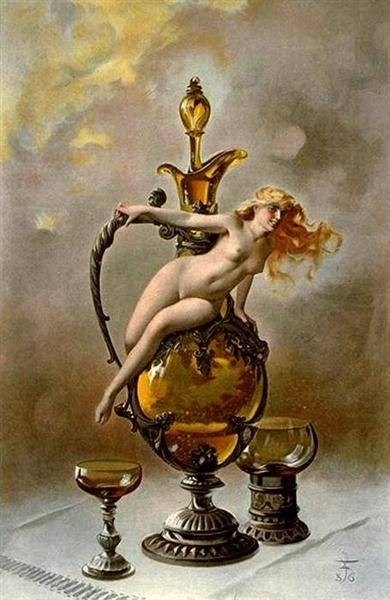 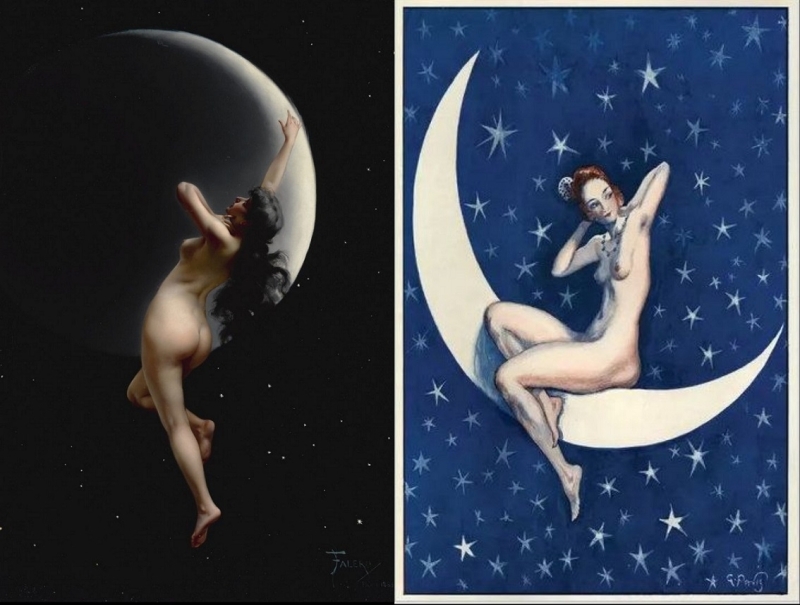 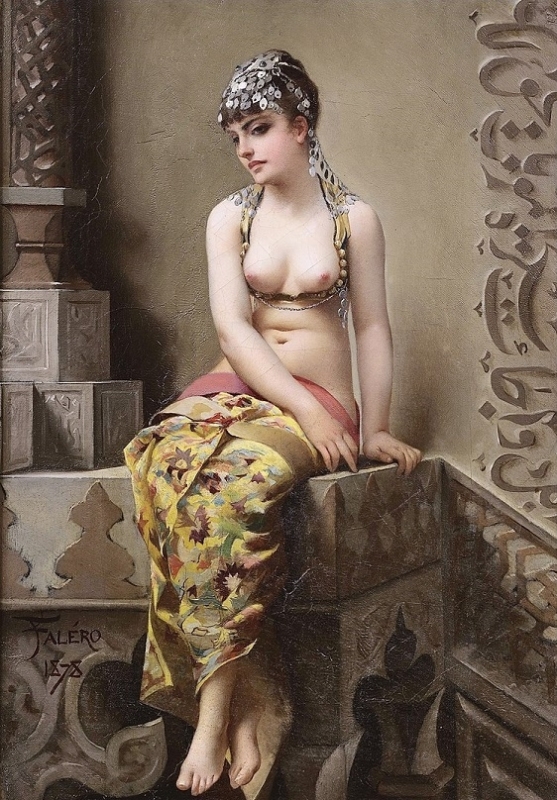 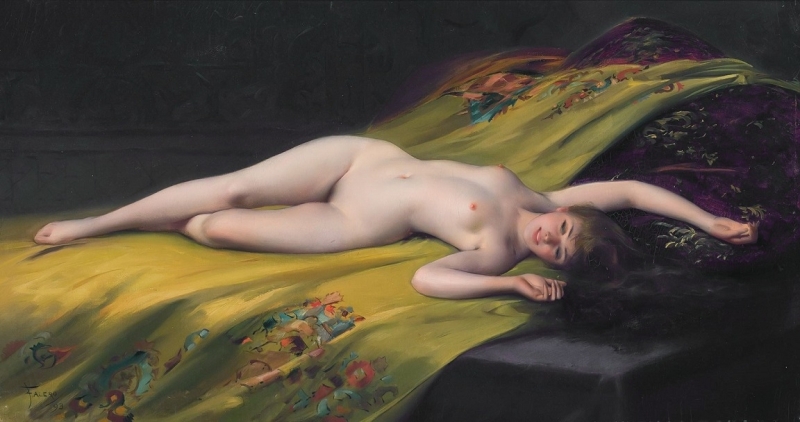 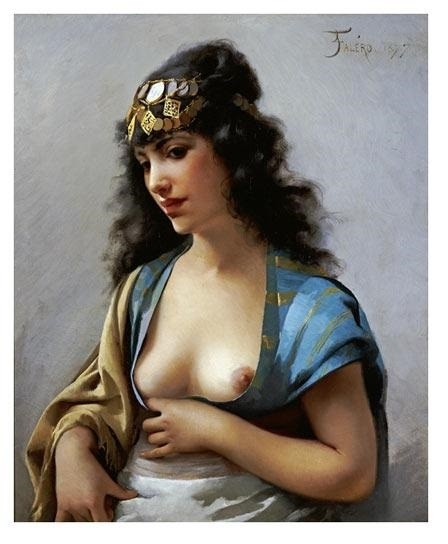 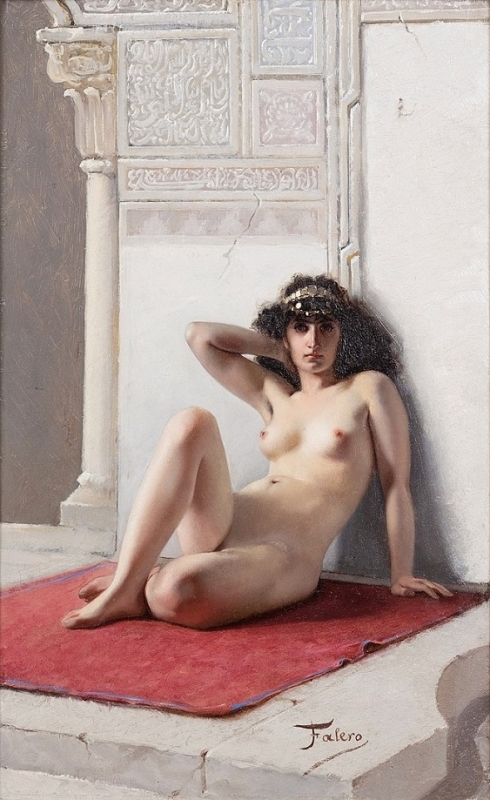 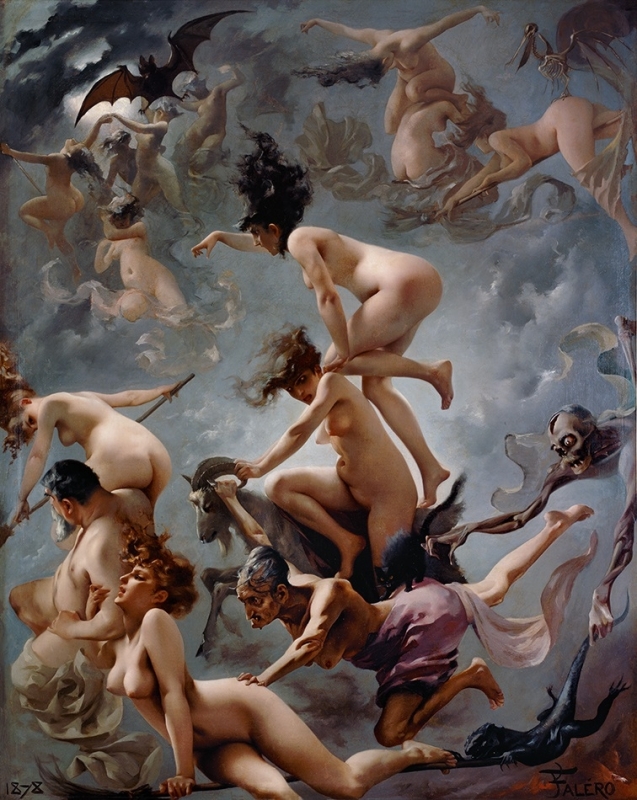 A Teacher and a Student

Falero initially planned to make a career in the Spanish Navy but changed his mind and, according to Wikipedia, traveled to Paris on foot to study art, chemistry, and engineering. After conducting some potentially dangerous experiments (we don't know if there was an accident), Falero devoted himself solely to art. His mentor was Gabriel Ferrier, a French portrait and orientalist painter (1847-1914). The list of Ferrier's works includes erotic pictures such as Moonlit Dreams (Fig. 11) and Salammbo (Fig. 12) and. While the latter example is close to Bouguereau's metaphors of morning and evening, the first work is remarkable because of its conceptual resemblance to oeuvres by Franz von Stuck (e. g., The Sin allegory) and Felicien Rops. Salammbo is the main character of a novel by Gustave Flaubert with the same title. The story tells about a Carthaginian priestess and daughter of the Carthaginian general, who aroused passion in Matho, a leader of revolting mercenaries. Ferrier depicts Salammbo with her pet serpent. The pagan spirit of the picture connects it with the infernal sabbaths portrayed by Falero. 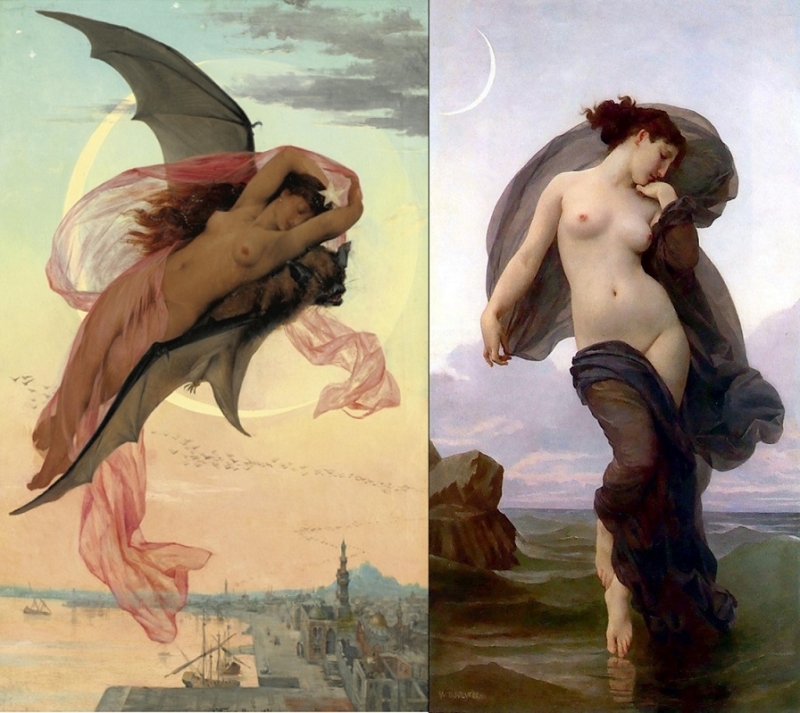 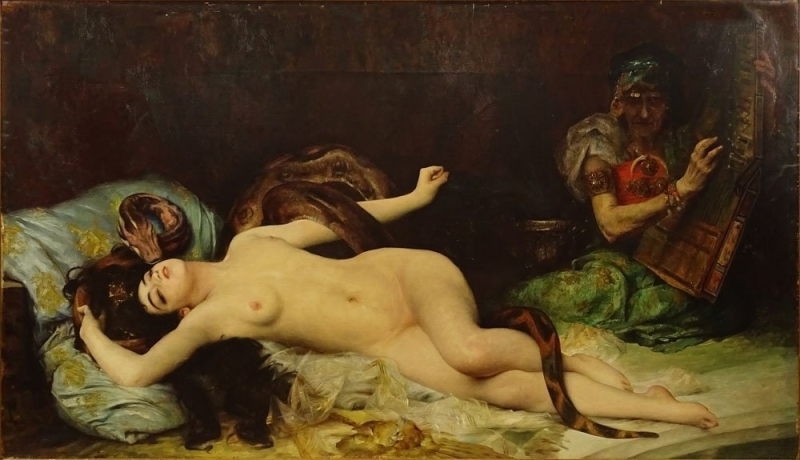 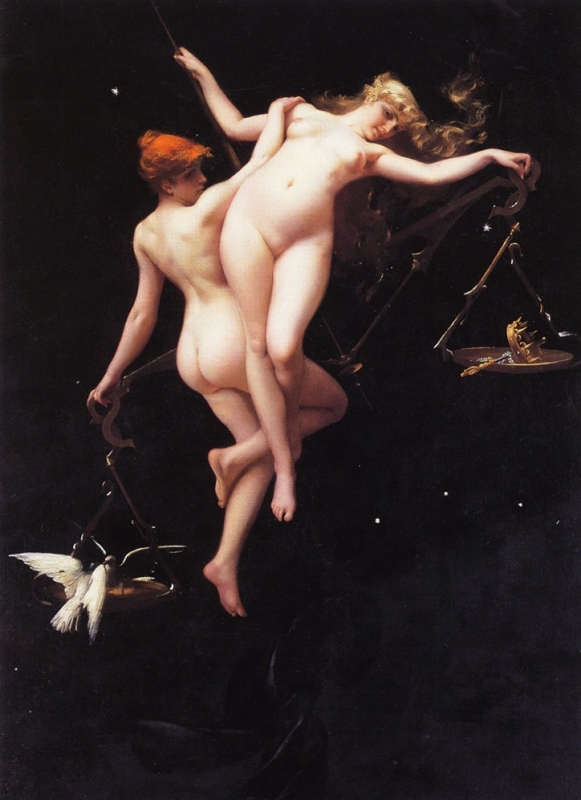 Fig. 13. Balance of the Zodiac (Wikimedia.org)

Astronomy also was the subject of Falero's interest and the source of his inspiration. His paintings like Moonlit Beauties, The Double Star, The Moon Nymph, The Planet Venus, The Balance of the Zodiac, Leo and Virgo, etc., demonstrate the artist's enthusiasm both for natural and supernatural forces ruling the Universe. Curiosity urged Falero to illustrate the works of French astronomer and mystic Camille Flammarion. Depicting space, the artist turns us back to the mythological tradition because he portrays any space object as a nymph or a deity. At the same time, there's a shift toward the scientific approach: when Falero depicts Venus, he shows us rather a planet than a sea-born goddess, though still accompanied by cupids (Fig. 17). 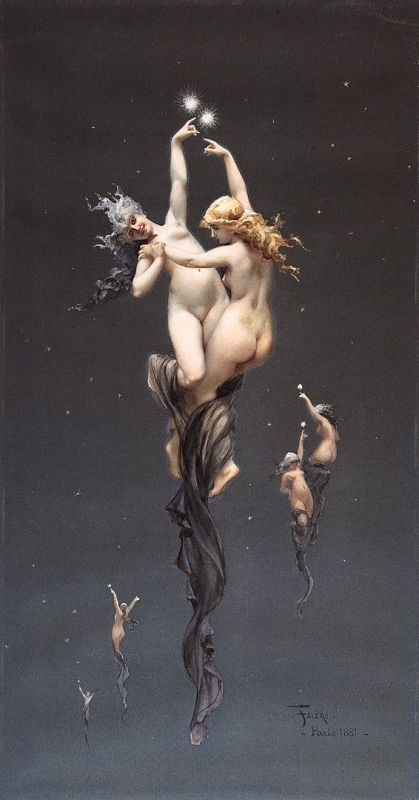 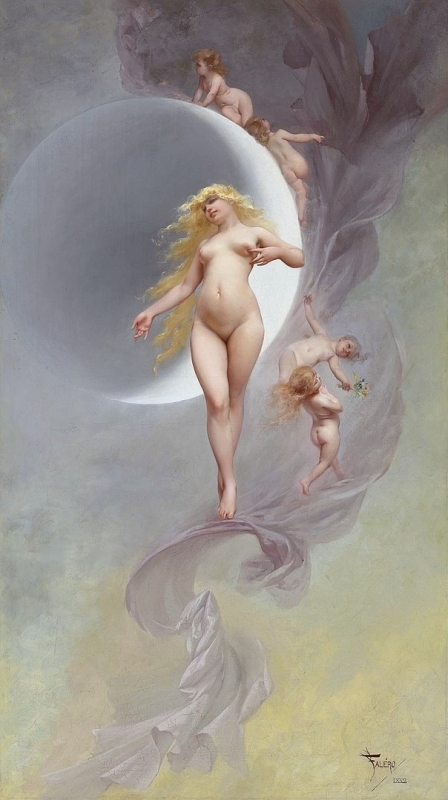 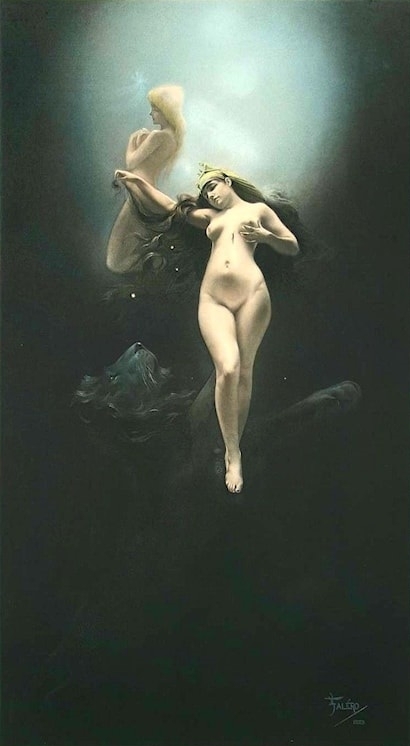 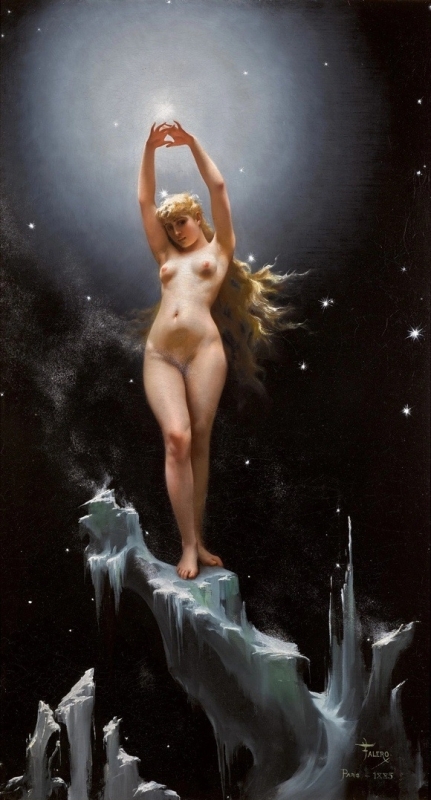 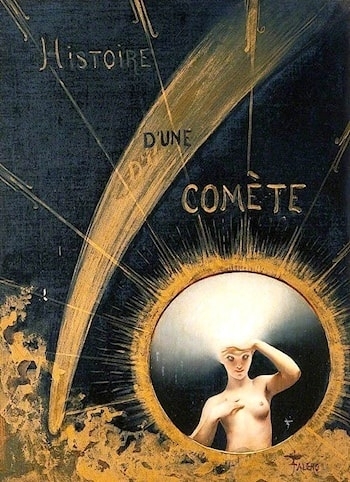 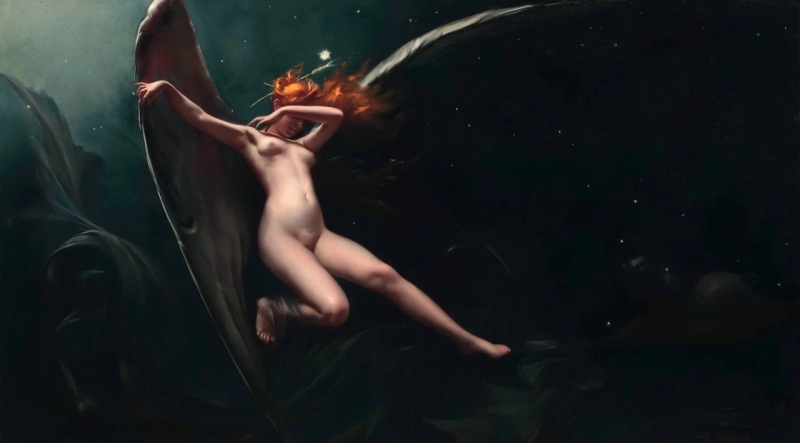 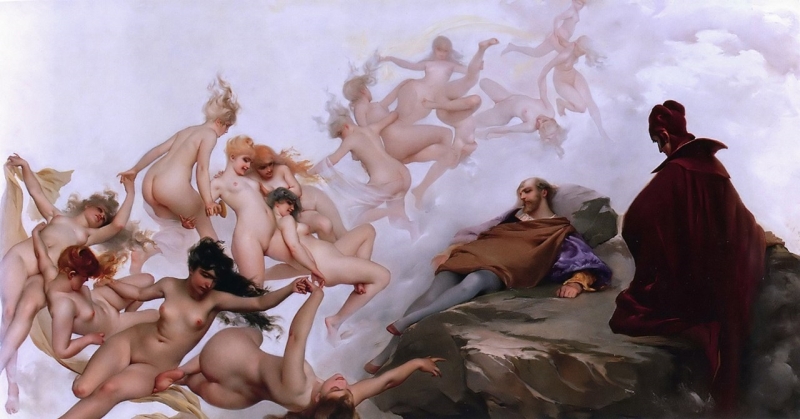 The Story of Gretchen

One of the most famous oeuvres of Falero is Faust's Dream, 1880. In this picture, based on a motif of the temptation of St. Antony, Faust is portrayed sleeping on a rock with Mephistopheles approaching him. As known, the doctor who signed a contract with the devil, in Goethe's version, complains that he's spent his youth studying instead of feasting with young maids and friends. Trying to make up the lost time, Faust orders Mephistopheles to seduce young Gretchen. At the end of the first part of the play, Gretchen kills her child from Faust, but the God decides to save her soul. Falero had his own Gretchen, whose name was Maud Harvey, though, the story was not as tragic as that of Goethe. Harvey sued the artist for paternity the year he died. She claimed that Falero seduced her when she was 17 and served as his housemaid and later as his model. After discovering that she was pregnant, the artist dismissed her. Harvey won the case and received five shillings per week for her kid. 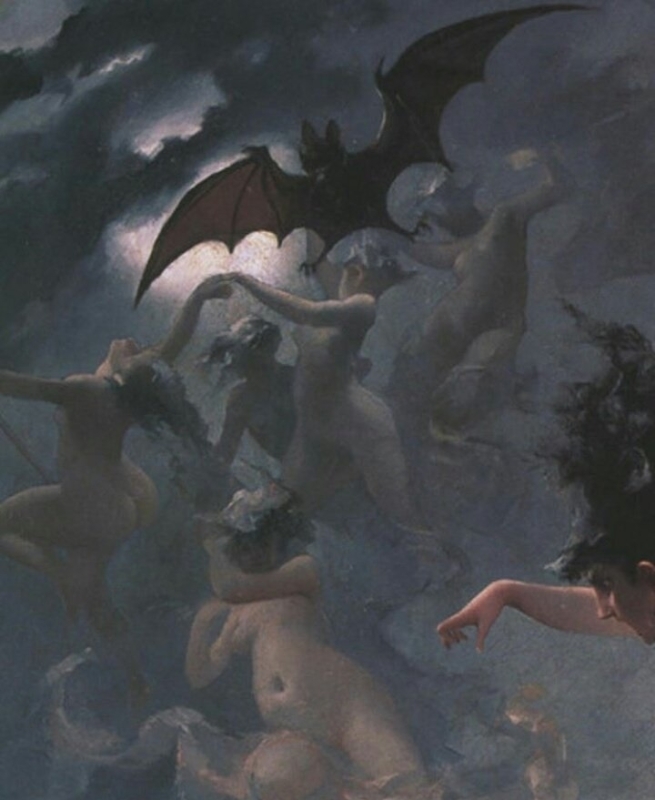 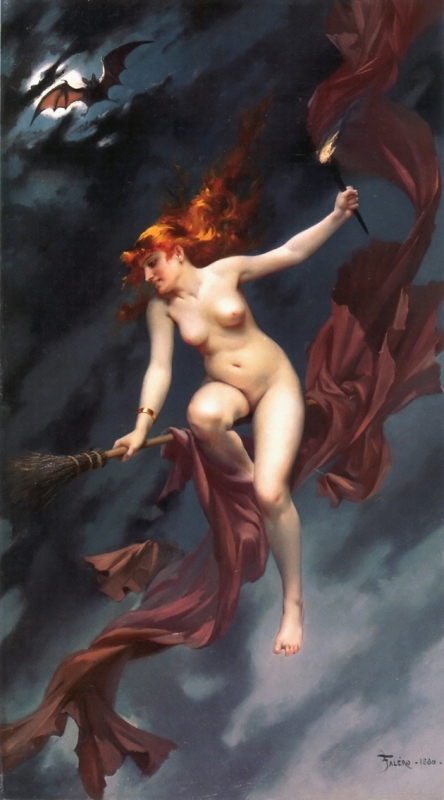 Become a Premium member and check out the exclusive version of this article and over 120 other sensual articles..!!

Click HERE for an article on Satan servants and the spirit of Salem in the pictures of Félicien Rops....!!