Bernard Picart (1673-1733) was a French engraver who followed his father, Etienne Picart, in terms of profession. He worked mainly as a book illustrator and produced engravings for the Bible and Ovid. Picart achieved prominence with his oeuvre, illustrarions to “Cérémonies et coutumes religieuses de tous les peuples du monde,” (Treaty of Religious Ceremonies of All Nations written by Jean-Frédéric Bernard and Antoine-Augustin Bruzen de la Martinière) being published from 1723 to 1743 (the whole set consists of ten volumes of text and engravings). According to Jonatan I. Israel, this book is “an immense effort to record the religious rituals and beliefs of the world in all their diversity as objectively and authentically as possible.” 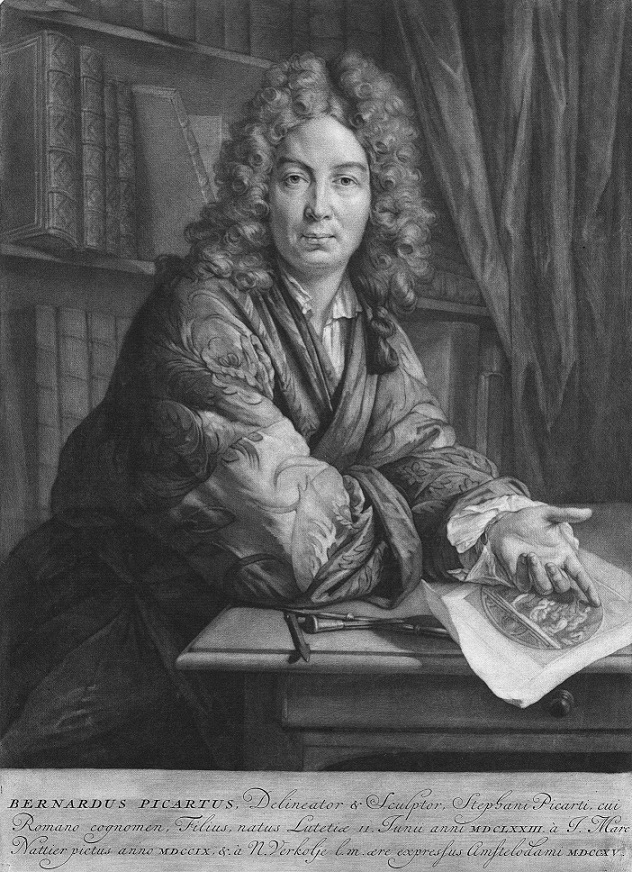 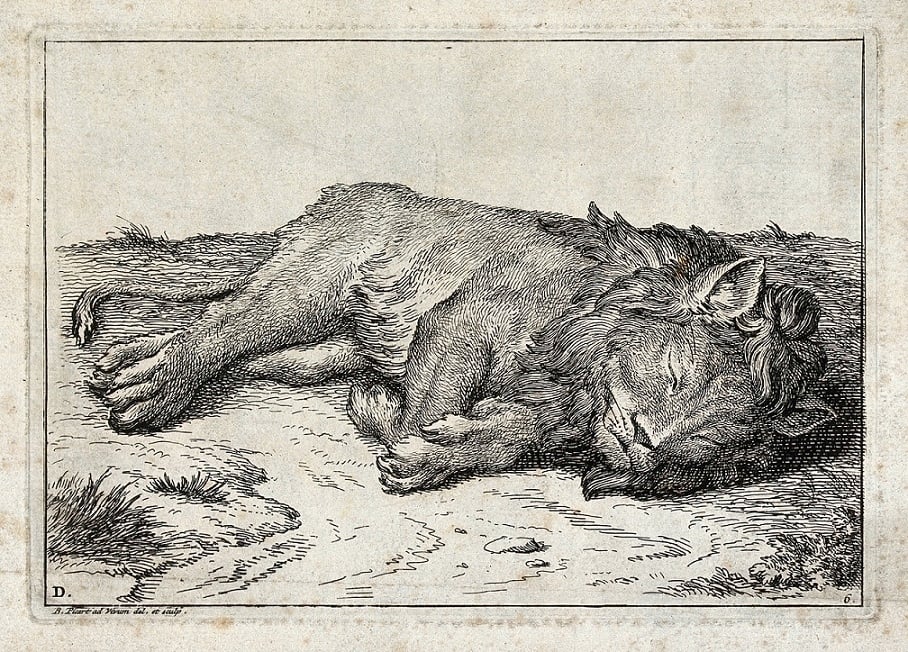 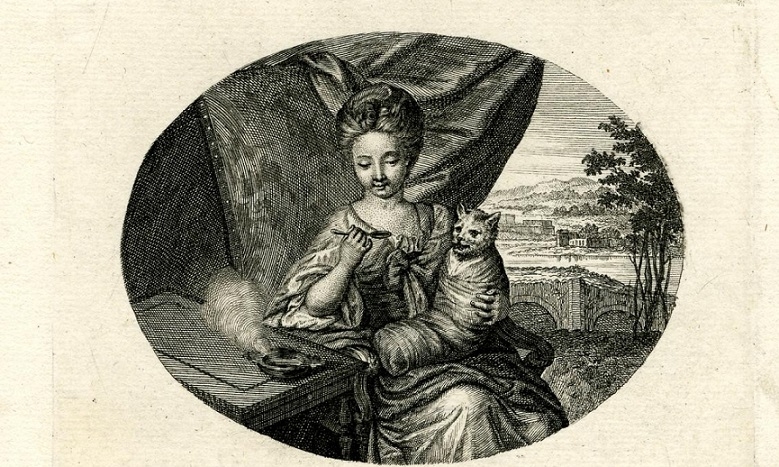 From the Bible to Scatology

Picart received primary training from his father, then studied drawing at the Académie Royale. In 1696, he moved to Antwerp and, two years later, to Amsterdam, where he worked as a book illustrator for a year. Then he returned to France and married in 1702. Six years later, the spouse having passed, Picart traveled to the Hague. Then he settled in Amsterdam again. At this time, he became sought after, and, as claimed by specialists, the quantity of his works outweighed their quality. d Nevertheless, it must be mentioned that he handled various carving instruments and had the talent for imitating the manners of other masters. Most of the engravings he produced are based on his own designs. The works include a wide range of topics, from biblical to scatological. 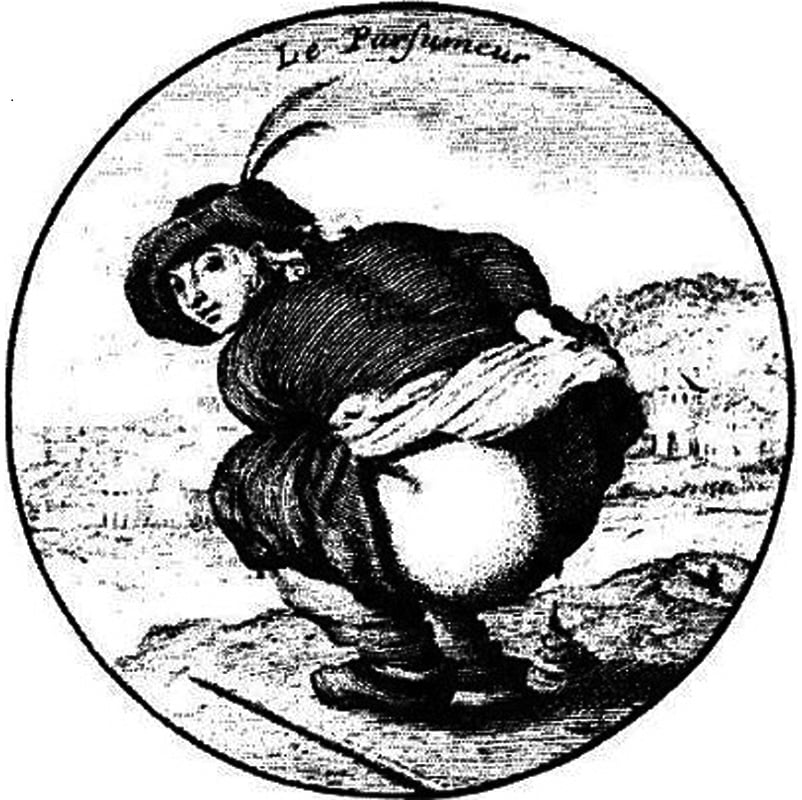 Fourteen sculptural engravings attributed to Picart catch the eye of the viewer because of their peculiar technique. Nude females standing or sitting on clouds represent the Greek goddesses or heroines such as Andromeda and Leda. Their figures shaped by stripes and dots look astonishingly dimensional as if they were produced by 3d designers. The image of a couple (Zeus and Hera or one of his countless lovers probably) resembles a palpable bas-relief. 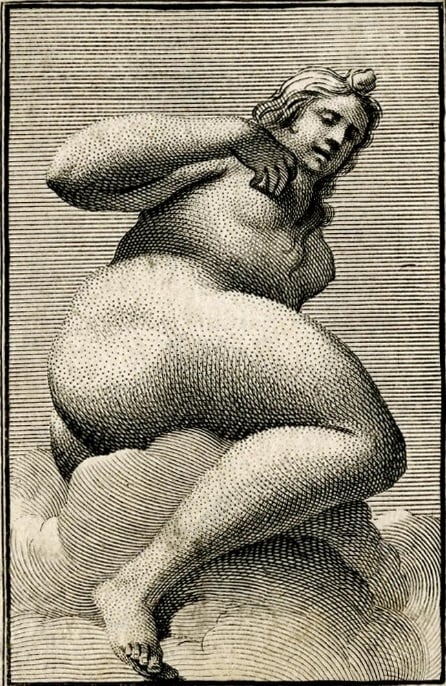 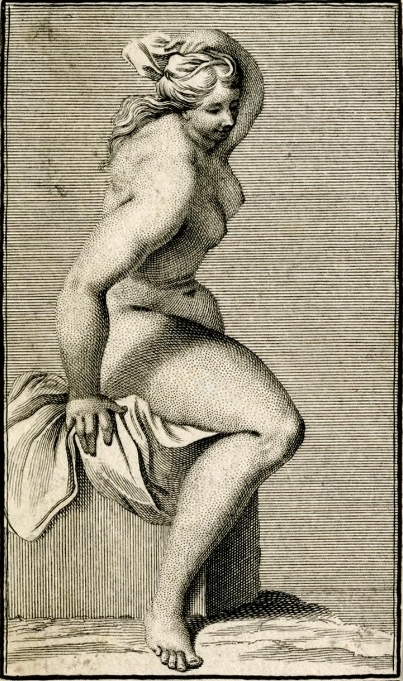 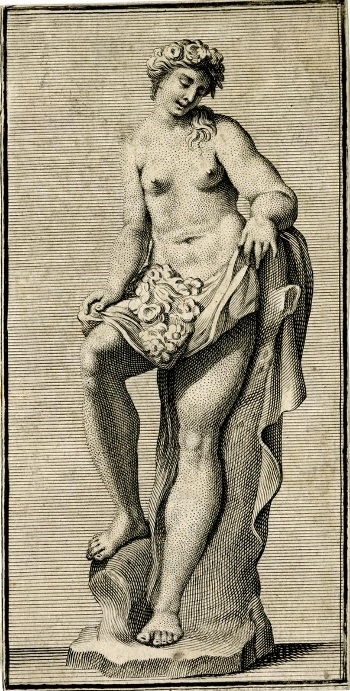 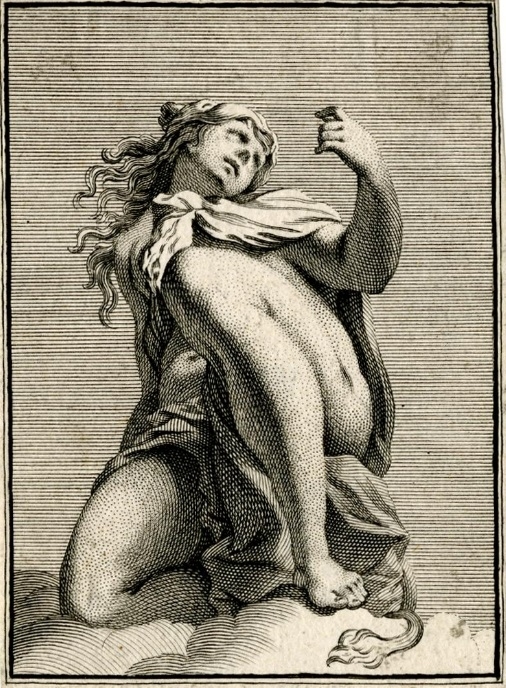 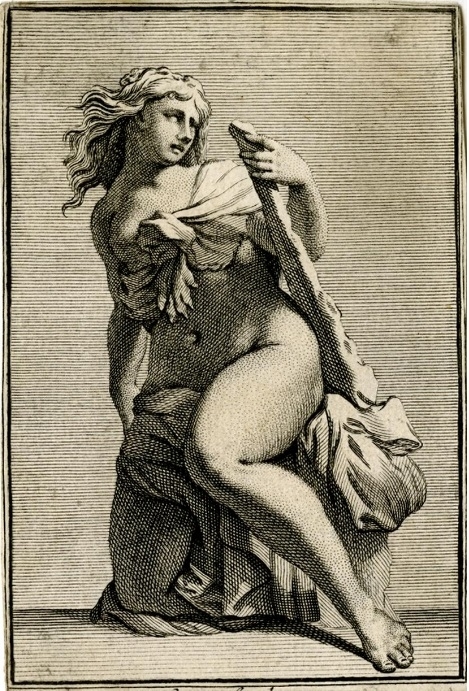 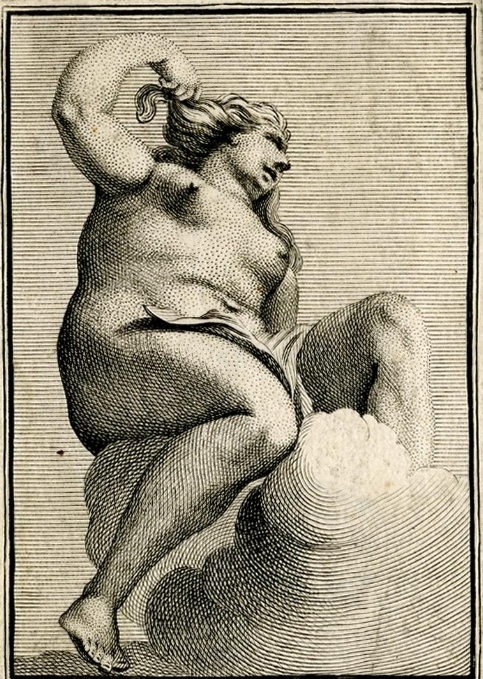 Fig. 13. A female bather. The study attributed to Picart (britishmuseum.org) 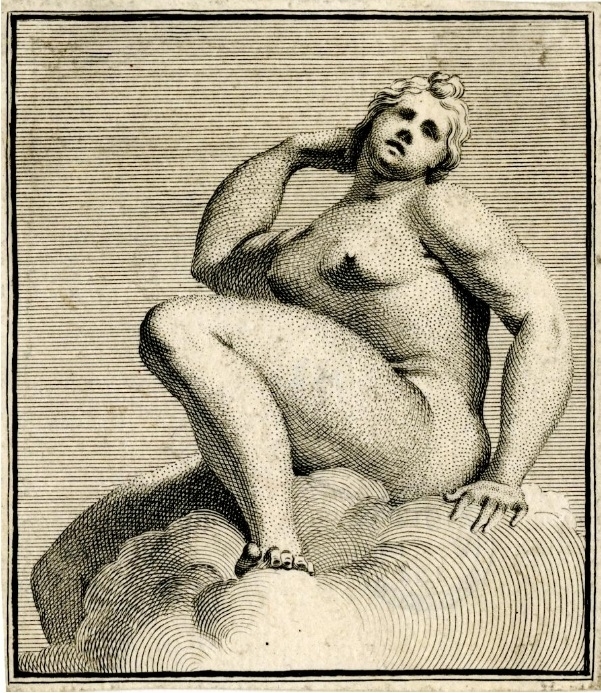 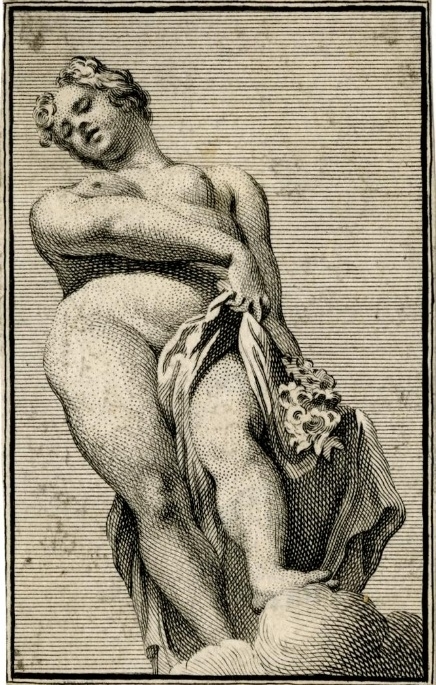 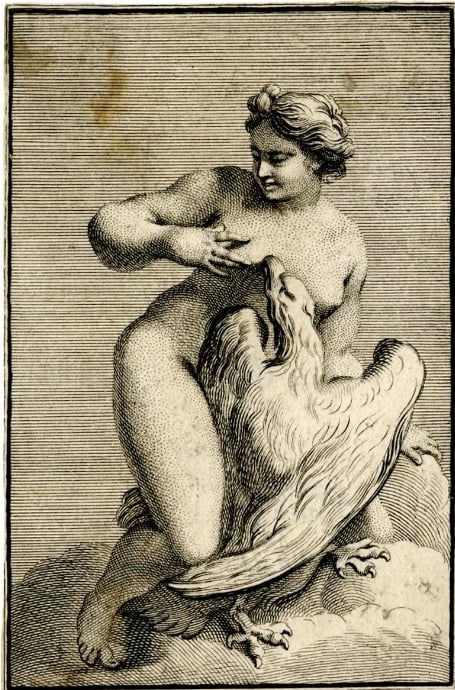 Fig. 19. The Nymph with the eagle of Zeus, attributed to Picart (britishmuseum.org) 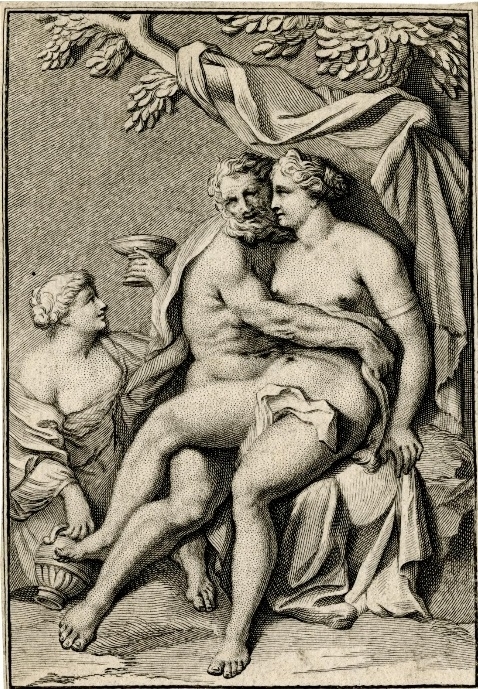 Fig. 20. Zeus and Hera with Hebe. The study attributed to Picart (britishmuseum.org)

The set above clearly was the depiction of ancient characters as statues, with sculptural faces and poses. Sometimes Picart acted the opposite way: he depicted mythical figures as if they were his contemporaries, with facial features typical for the paintings of the 18th century: pretty small heads, round cheeks, and large eyes much in the spirit of Fleisher’s Betty Boop character. The most obvious example is Picart’s depiction of Danae with traditional gold coins and a greedy servant behind her (fig. 21). There is nothing of the previous set in this smiling modernized dolly. She looks like a typical noblewoman of that time but still nude like all mythological females. The same transformation happens in his engraving of Zeus and Antiope (fig. 22). Zeus, disguised as a satyr, was depicted in a traditional way while Antiope became a modern European woman. Another amusing detail is the eagle spreading his wings to hide the scene from curious witnesses and jealous Hera. The most striking image among these Betty Boop’s ancestors is the academic study of the female figure (fig. 23). Her athletic body reminds us of ancient proportions and even male ones more than female, while her head is typically drawn in the rococo style. This slight discrepancy assimilates the image to a collage. 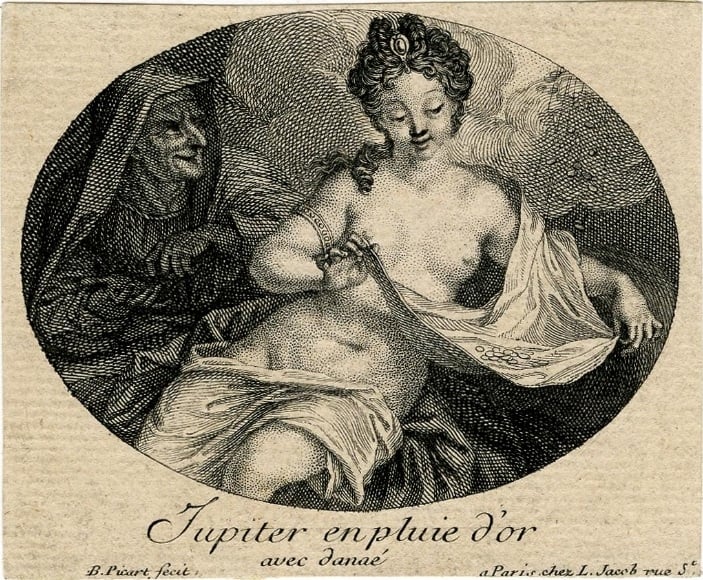 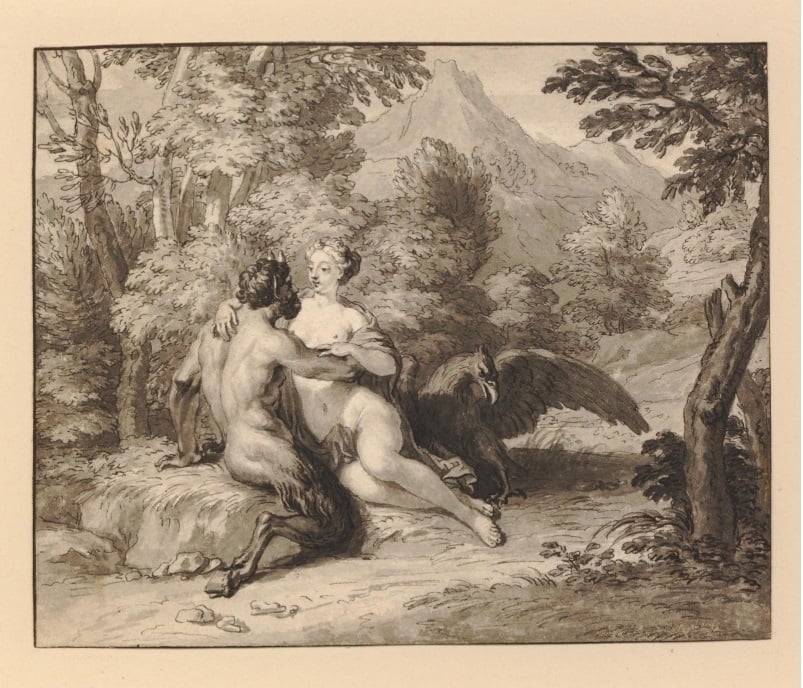 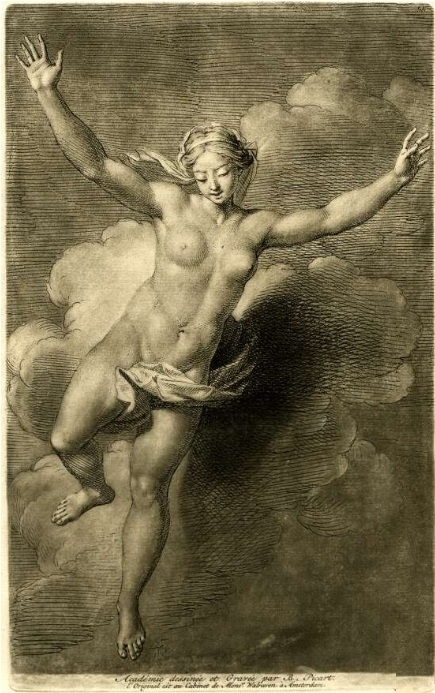 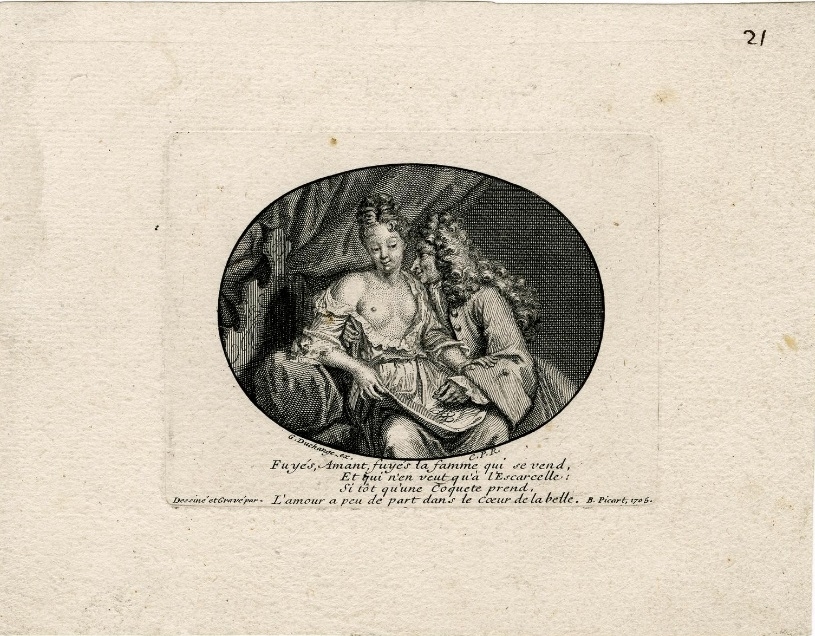 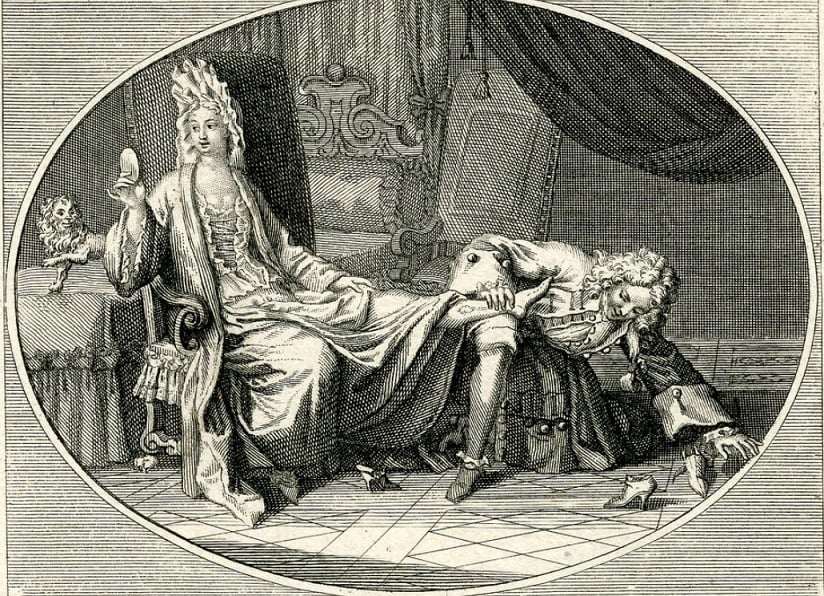 Fig. 25. Man wants to put a shoe on a foot of the female looking in the mirror (britishmuseum.org) 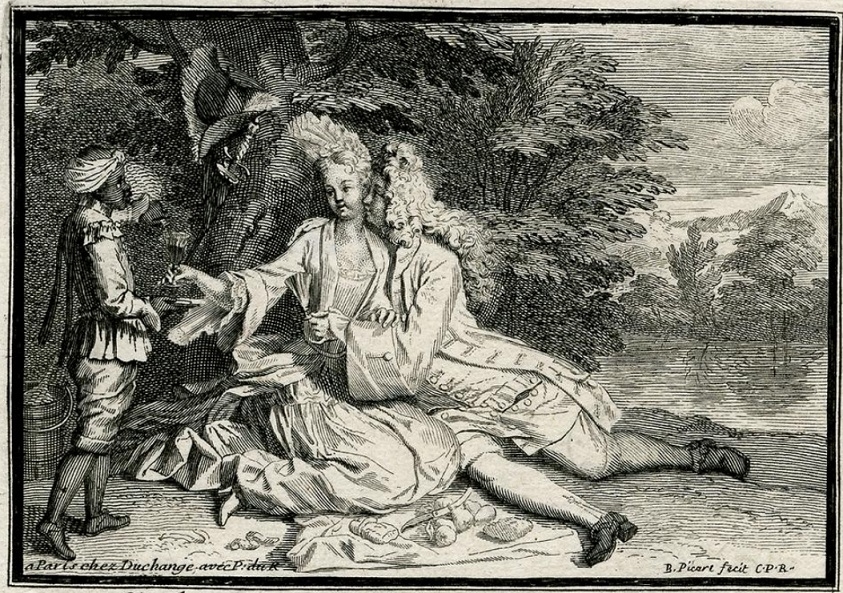 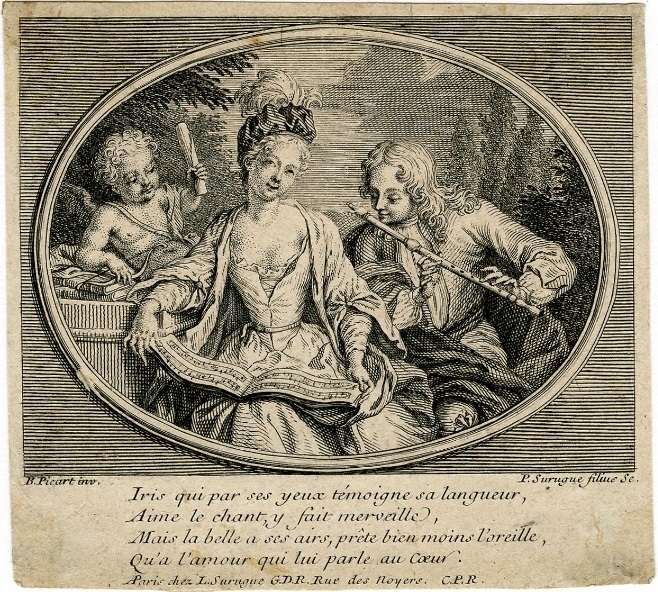 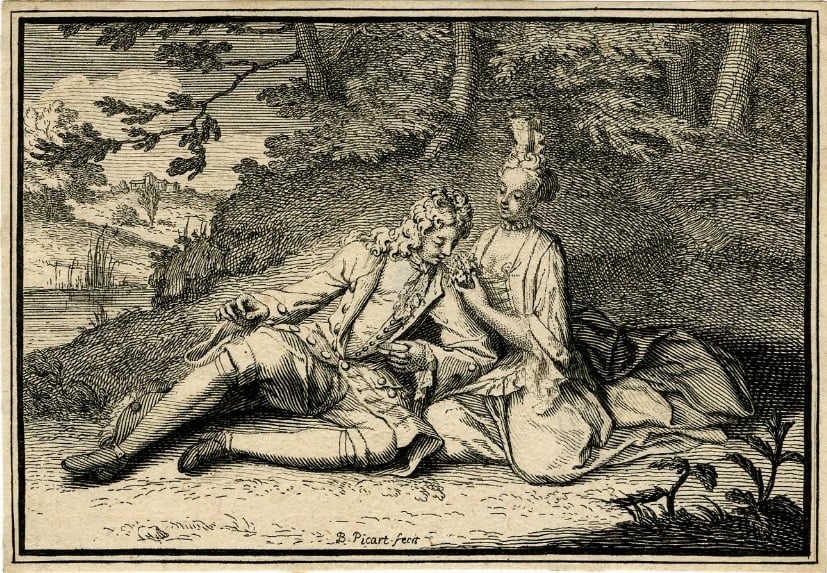 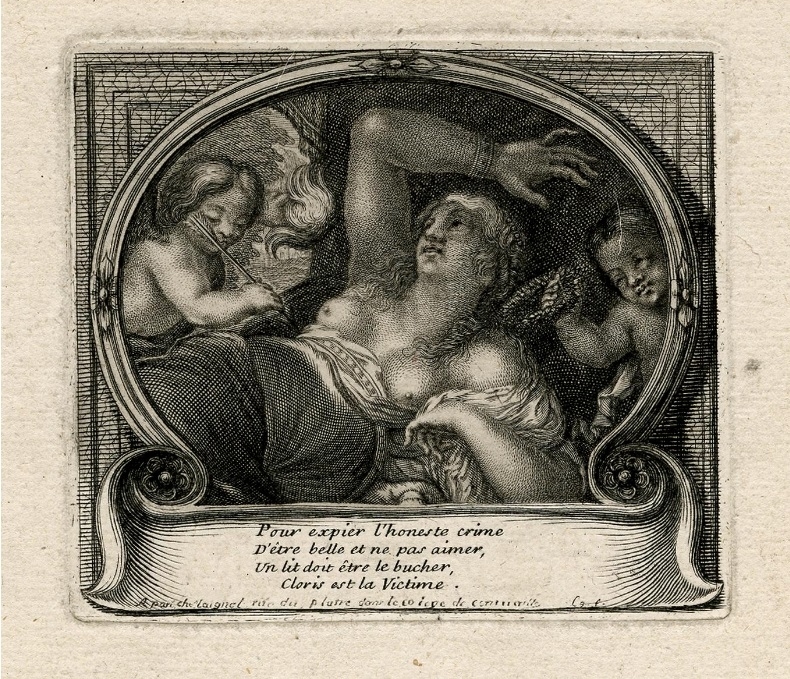 Fig. 29. Reclining maiden who is about to be pricked by cupid (britishmuseum.org)

Among well-known plots involving Danae, Antiope, Semele, Galatea, Andromeda, a. o., which Picart depicted, there is an amusing one about the goddess of the dawn who fell in love with the mortal man Tithon who was a prince of Troy and a rhapsode. When she asked Zeus to make her lover immortal, she forgot to mention eternal youth, so Tithon was bound to get old forever. Eventually, he shrunk into a cicada, still singing his songs and begging for death. Picart masterfully depicted the moment of Tithon’s metamorphose. Fig. 30. Eos and Tithon turning into a cicada (britishmuseum.org)

Let us know your thoughts on the sensual baroque art of Hendrick Goltzius in the comment box below…!!