A Selection of Rare Koban Egoyomi Prints by Katsushika Hokusai

In the early 18th century the manufacture of official calendars in Edo (former Tokyo) were only authorized by the shogunate to a limited amount of publishers. From the 1750s there seems to have been a trend of privately commissioned small calendar prints (egoyomi) that were produced for wealthy patrons who would share them among the members of their literary circles.

The specific sequence of the ‘long’ (30 day) or ‘short’ (29 day) months of the coming year was indicated in their composition or through the incorporation of numerals, sometimes in rebus form.

In the beginning of the 19th century, egoyomi was adopted by shunga designers. They were often issued in sets of twelve and commonly included a wonderfully printed wrapper, in which the print could be stored.

The prints were not signed and the printing was subtle, similar to that of surimono. Hokusai (as often) was a pioneer in the design of the small-sized egoyomi. He and his school produced a great many of these works, but few survived. 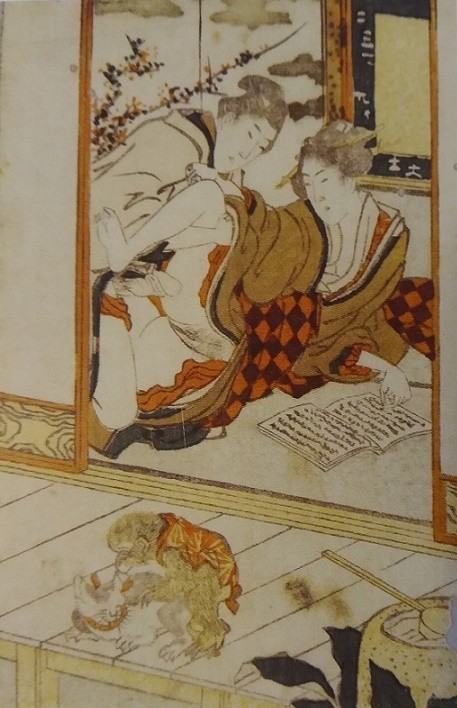 Year of the Monkey

An egoyomi depicting a loving couple (Fig.1), with a book before them and a copulating monkey and cat on the foreground veranda. The frame of the screen behind the couple include the numerals for the long months (2, 5, 7, 9, 10, 11), which points to 1812, Year of the Monkey. 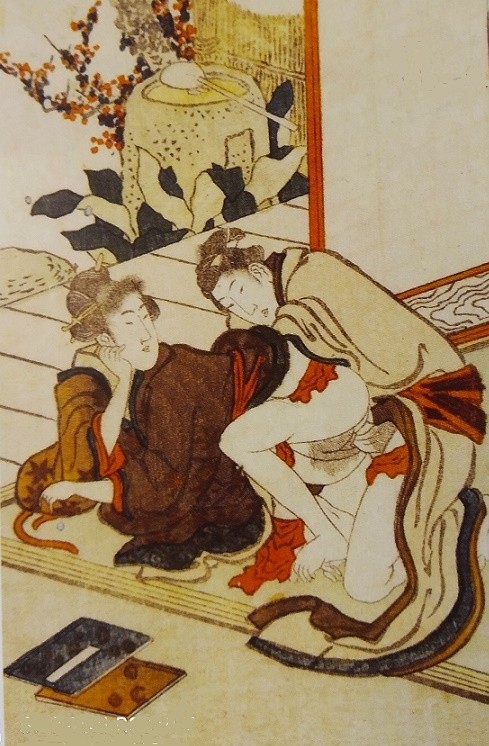 A man and woman in the corner of a room (Fig.2); the sliding doors are open and two closed books are on the floor before them. The image is believed to date to c.1812-14, but there are no calendral associations. 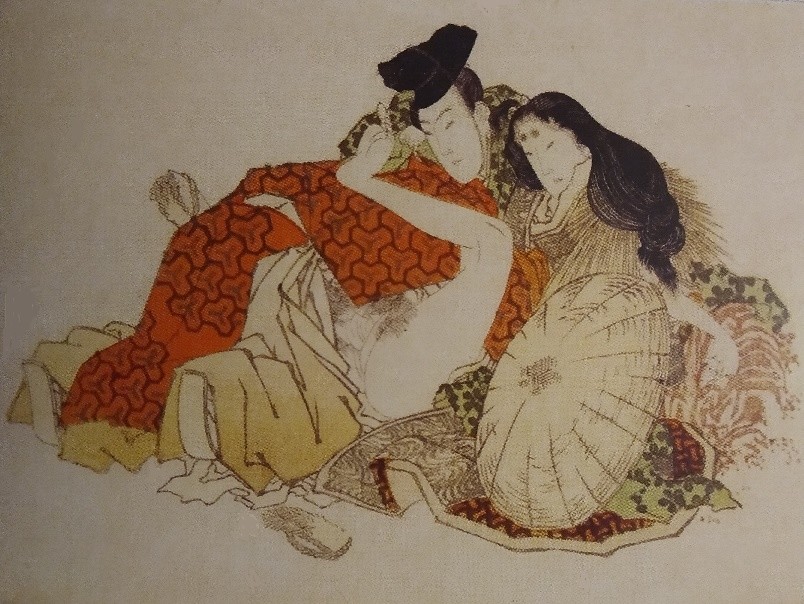 The large straw hat and the aristocratic countenance (eyebrows, hair and dress) suggests that the woman might be Tokiwa Gozen (Fig.3), the 12th-century mistress first of Minamoto (no) Yoshitomo and later of his enemy Taira (no) Kiyomori. Here she is having sex with an unidentified courtier. No calendrical information is apparent on the print. The image is believed to date to c.1812-14. 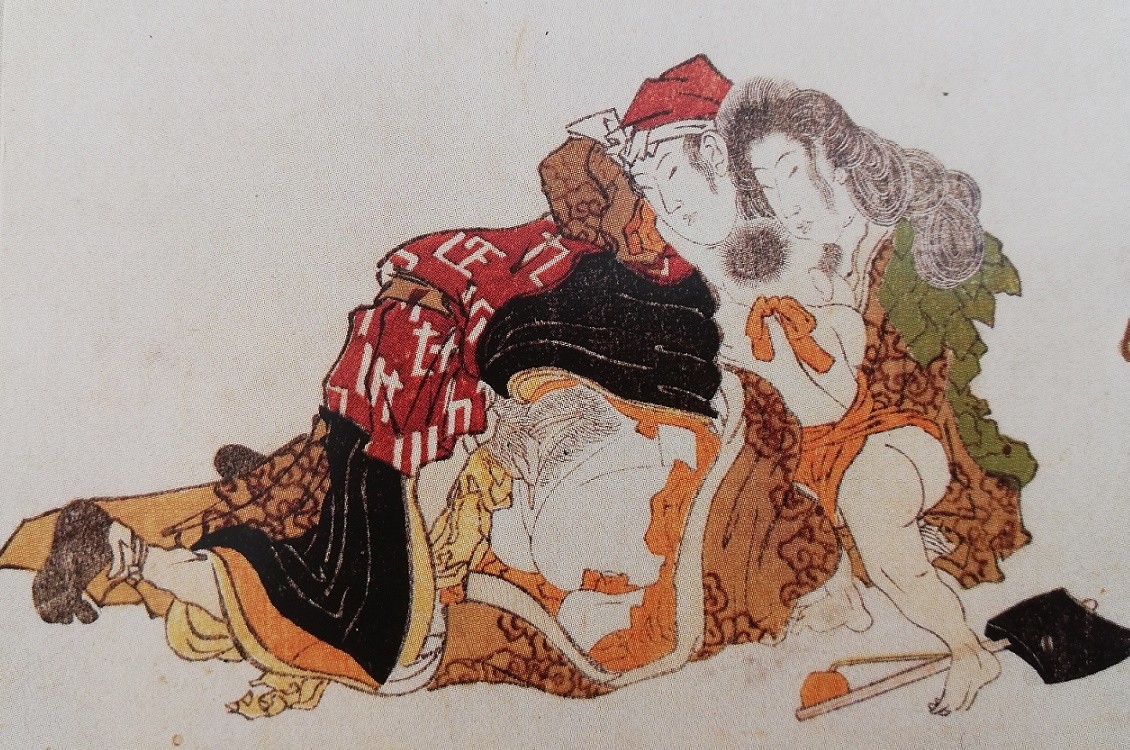 The woman Yamauba and her samurai lover (Fig.4). Yamauba is best known as the foster mother of the strong boy Kintaro (Sakata [no] Kintoki), a retainer of the 12th-century warrior Minamoto (no) Yorimitsu. Yorimitsu’s robes are inscribed with numerals for the long months (1, 3,, 7, 9, 10, 12) of the year 1814. The young Kintaro clambers into his mother’s lap; one of his attributes, the axe, lies to one side. 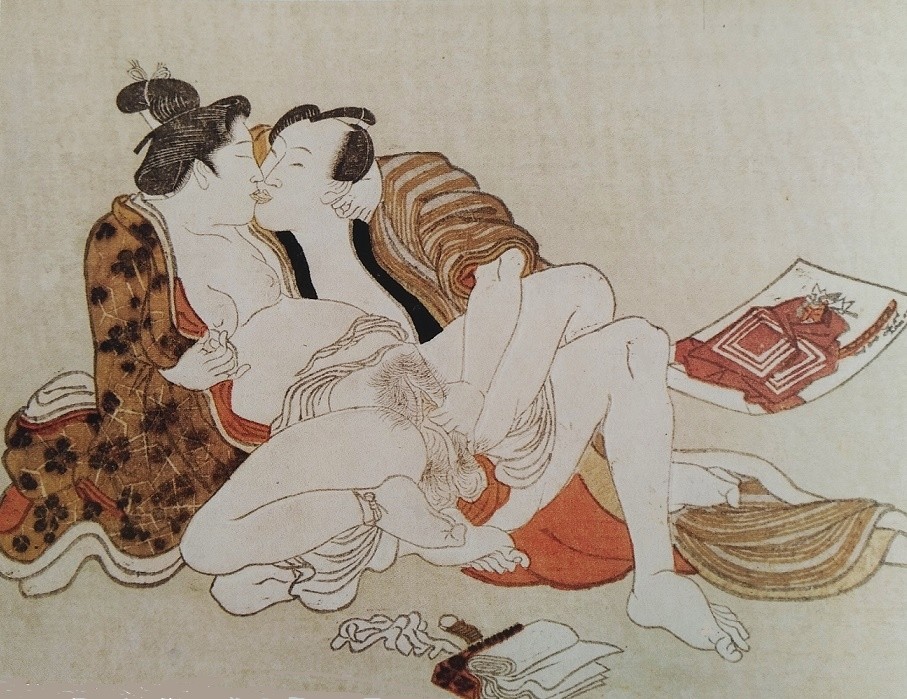 An intimate couple passionately kissing. On the floor to their right lies a print of an actor from the Ichikawa Danjūrō line in the role of Shibaraku and before them a wad of paper. No calendrical information appears on the print.

An aristocratic couple having sex. They are perhaps the goddess of music and one of the Seven Gods of Good Fortune (shichifukujin), Benten (Benzaiten), and the courtier Hōjō (no) Tokimasa (1138-1215).

Benten’s attribute, the biwa (lute), lies in the background. The calendrical information is contained in the text: the short months for 1814. Year of the Dragon. Not surprisingly, the dragon is closely associated with Benten. 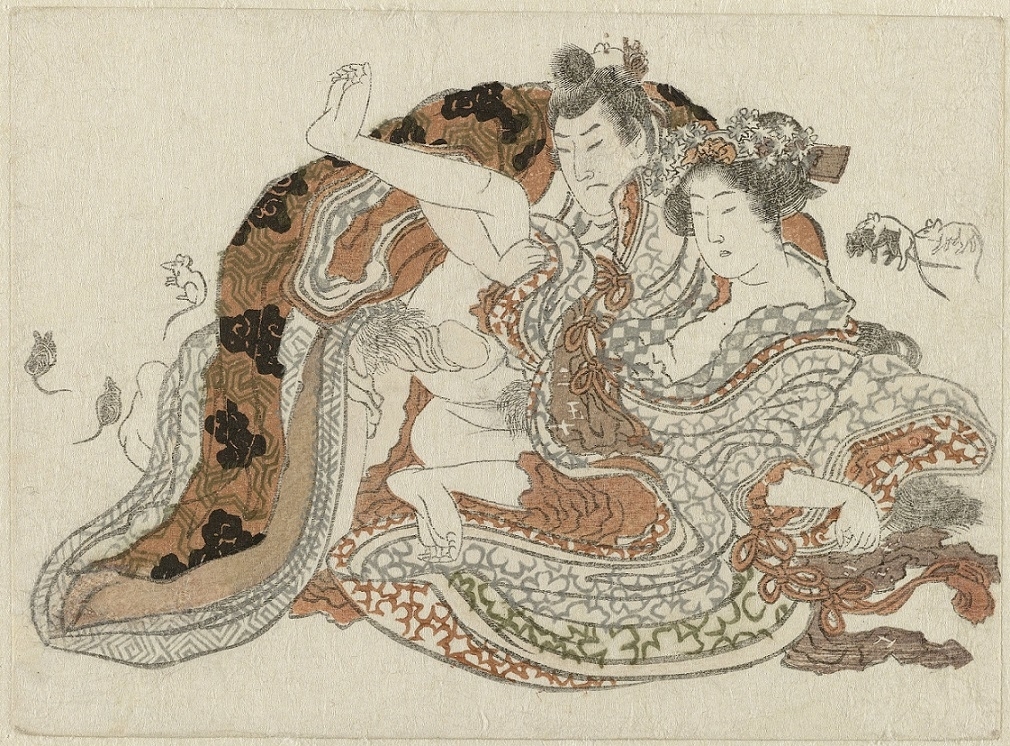 Fig.7. (Housed in the Rijksmuseum A’dam)

Year of the Rat

Fig.8. (Housed in the Rijksmuseum A’dam) 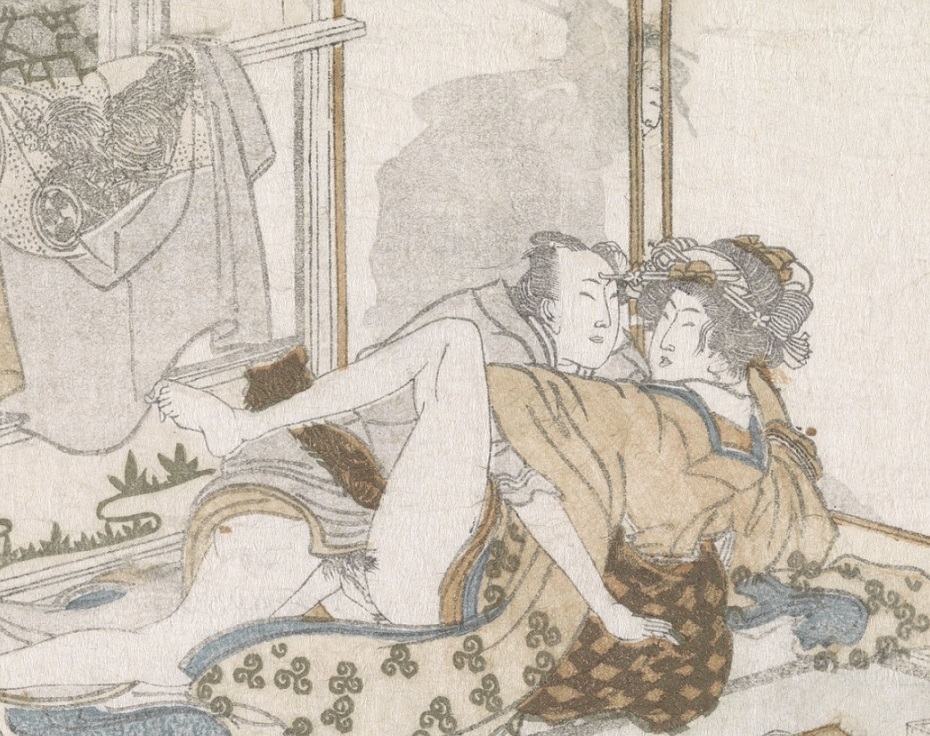 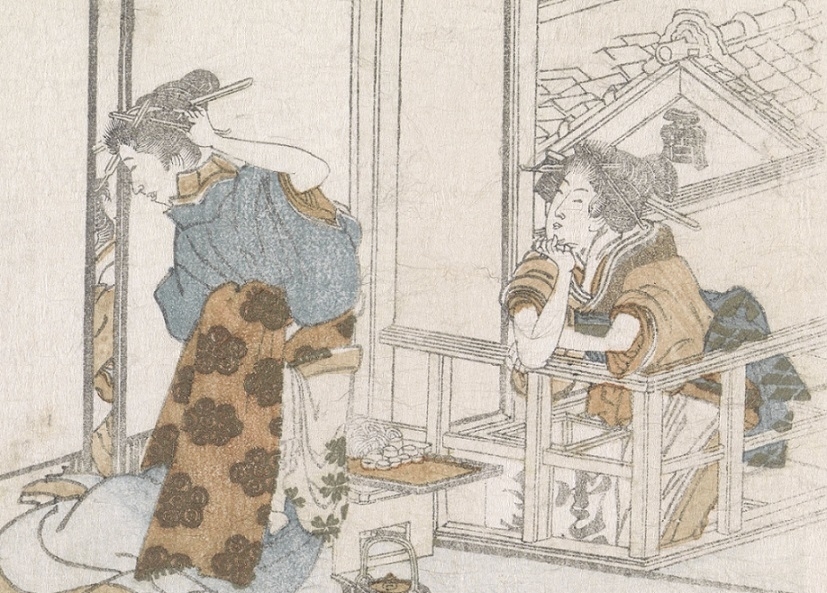 Click HERE for a post with descriptions of authentic shunga prints by Hokusai for sale (also includes a rare egoyomi piece!)….!!

What do you think about this article? Leave your reaction in the comment box below…!!

Thank you, Marijn! Figures here seem to be a bit lesser than in more famous prints by Hokusai where bodies often fill all the space of the image.

Thanks Darya. Yes, this format (especially in the vertical) and the freer assignment gave him the opportunity to experiment. The protagonists were more pushed back into the composition so that he could include for instance the copulating monkey..

Thanks Carmelo. Yes, the rats both as a poetic addition and reference to the zodiac symbol.