Fig.1. ‘The Dream of the Fisherman’s Wife (c.1814)’ from the series ‘Young Pine Saplings (Kinoe no komatsu)‘ by Katsushika Hokusai (Sold)

“In these albums we find this frightful image: on rocks green with seaweed lies a naked body of a woman, swooning with rapture, sicut cadaver, such that we know not if she is alive or has drowned, and an immense octopus, its dreadful pupils the shape of black quarter-moons, sucks her nether regions, while a smaller octopus greedily feasts upon her mouth.”

Octopus: “Wondering when to do the abduction, but today is the day. At least she’s captured. Even so, this is a plump, good pussy. A greater delicacy than even a potato. Saa, saa, sucking to complete satisfaction, then take her to be imprisoned  in the Dragons King Palace.

Octopus: “Say! How about the feelings of being entwined by eight legs?”

Small octopus: “After my parent is finished, I too will use my projecting mouth to rub from her clitoris to her ass until [she] loses consciousness, and then I’ll do it again, chu, chu.”

In the catalogue of the British Museum Hayakawa Monta (professor at the International Research Center for Japanese Studies) comments on “The Dream of the Fisherman’s Wife” the following:

“This is the shunga image by Hokusai that has always fascinated people the most. Dragging a diving woman into a cleft between two rocks a large octopus is taking its pleasure, using almost all of its eight legs to coil around and play with her arms, legs and nipple.

A second, smaller octopus simultaneously ‘kisses’ her on the mouth. For all that this is an image of far-fetched fantasy, with its powerfully volumetric forms and brilliant coloring, it nonetheless gives the vivid sensation that we are direct witnesses of the scene, as the tentacles seem to slither and writhe before our gaze.

Fig.3. The print that inspired Hokusai “Octopus” design entitled ‘Diver and Octopuses‘ (c.1786) from the series ‘Picture Book: Lust of Many Women on One Thousand Nights (Ehon chiyo-dameshi)‘ by Katsukawa Shuncho (act. ca. 1783 to 1795)

The diving woman who gives up her body for the octopus to have its way may at first appear ‘lifeless, like a corpse’ (as Edmond de Goncourt wrote); but in fact she has all but lost consciousness with the pleasure that the creature is giving her. This is abundantly clear from her arched back, her tight grip on the tentacles, and her long sighs, cries and exclamations that fill the dialogue text surrounding them.

Diver Who Stole a Jewel

Even before that, Suzuki Harunobu (d. 1770) and Katsukawa Shunsho (d. 1792; Fig.4.) had both designed so-called ‘risqué pictures’ (abuna-e) – images that titillating but not explicit – on the theme.”

An accurate description of The Dream of the Fisherman’s Wife by the shunga expert Rosina Buckland (British Museum) goes as follows: […] ‘Despite the passage of nearly two hundred years, it has lost none of its arresting graphic power. A naked woman lies between to seaweed-covered rocks, her legs spread to accommodate a huge octopus which penetrates her with its mantle. One of its tentacles curls around to stimulate her clitoris. At her head, a smaller octopus cradles her neck as it battens on to her mouth and tweaks her left nipple.’

The woman is one of the female divers (ama or awabi) who gathered abalone shellfish. Women possess more hypodermic fat so have an advantage over men in being able to endure the cold temperatures of the water, and these divers were renowned for their ability to hold their breath for long periods of time.

Ama had appeared in various archaic stories, in particular Taishokan, the tale of a Buddhist jewel captured along the way from China to Japan and taken to the Palace of the Dragon-King. An ama finally succeeds in rescuing the jewel, but only by cutting her breast open to conceal it, thereby sacrificing her own life.

This story was turned into a noh play in the early fifteenth century, as well as being adapted for more popular stage plays. The story was represented in woodblock prints, but during the eighteenth century the depiction of the barely clad divers, wearing only a red underskirt, became sensualized and provided suitable subject matter both for ukiyo-e designs of beauties (such as the opening page of the Utamaro’s Poem of the Pillow album), and for explicit images of octopuses penetrating and sucking.

In addition, tako, the word for octopus, was argot for vagina, for its ability to suck firmly, and this term is used in the dialogue here. Yet the design lacks obvious references to the tale of the heroic diver, contemporary readers (viewers) of the book would have been familiar with these links, and would have understood the visual play which Hokusai was deploying in his extraordinary design.*

The following exciting video features some other interesting designs on the Octopus theme:

After its release Hokusai’s famous ama diver design has inspired many artists over time. Below you can find some exciting examples:

Illustration from the magazine Mayfair’s 1975 edition by Angus McBride

Etching of ‘The Dream of the Fisherman’s Wife‘ by seriykotik1970

‘The Dream of the Fisherman’s Wife‘ by Lisa Riordon

Cartoon ‘The Dream of the Fisherman’s Daughter‘ by Tenugui

‘Tamatori-hime being pursued through the waves by the Dragon King and his retainers and a giant octopus‘ (c.1848) from the series ‘Shizu no ama otome Daishokan‘ by Utagawa Kuniyoshi (1797-1861)

‘Dream of the Fishermans Wife‘ by Tattoo artist Brooke Steele

‘Ryõshi no tsuma no yume‘ by Randy Hall

Vector redrawing of Dream of the Fishermans Wife by Dyna Moe

‘The dream of the fisherman’s wife‘ (2013) by pink-porcupine

Another gay variation by an unknown artist

‘The Dream of the Fisherman’s Wife‘ by Michael Cottage

‘The Dream of the Octorok’s Wife‘

‘The Legend of Korra‘

‘Octopus girl‘ from the book ‘Human Nature‘ (2010) by Daikichi Amano

Silkscreen print ‘A Perfect Lover, a woman and an octopus on the beach (after Hokusai)‘ (1997) by Joost Veerkamp

‘Octopus and shell diver‘ (c.1870s) in the style of Kobayashi Eitaku 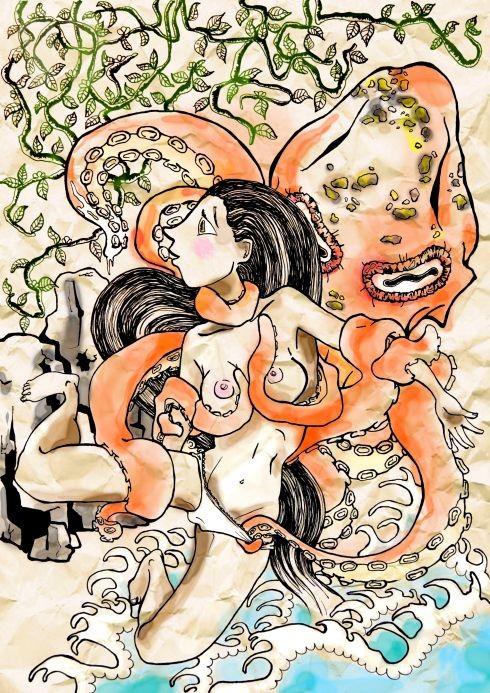 Iron, acrylic gouache on canvas ‘The Dream of the Fisherman’s Wife‘ (2018) by Sisyu

Painting. Ink and color on silk ‘Octopus And Ama Diver‘ (c.1900) by an unknown Meiji artist

‘Dream of the Fisherman’s Wife‘ (2004) by Judith Schaechter

Sketch of ‘Ama and Octopus after Hokusai‘ by Muhamed Kafedžić – Muha

From the ‘Squids and Octopus‘ series (2011) by Neoteny

3D version of ‘The Dream of the Fisherman’s Wife‘ on Widewalls.ch

‘The Visitor‘ by Pete Tapang

‘The Fisherman’s Wife‘ by Hiten Damodar

‘Dream of the Fisherman’s Floozy‘ by WolfStudiosArt

‘The Giant Member Fuji versus King Gidora‘ (1993) by Makoto Aida

Tattoo inspired by ‘The Dream of the Fisherman’s Wife‘ by Nicholas F. Chandrawienata

Redux of ‘the dream of the fishermans wife‘ by Franvolio

‘The Dream of the Fisherman’s Wife‘ by Emily Perozzo

Cover for a soundtrack of a manga movie

Another gay version of Hokusai’s design: “Dream of the Fisherman’s Wife‘ 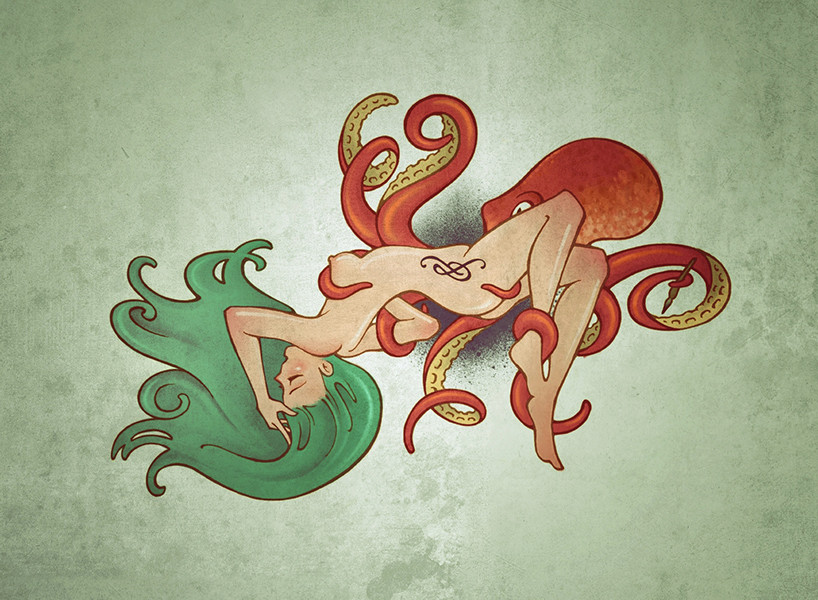 ‘The Dream of the Calligrapher’s Wife‘ by Jonathan Cuervo Cisneros 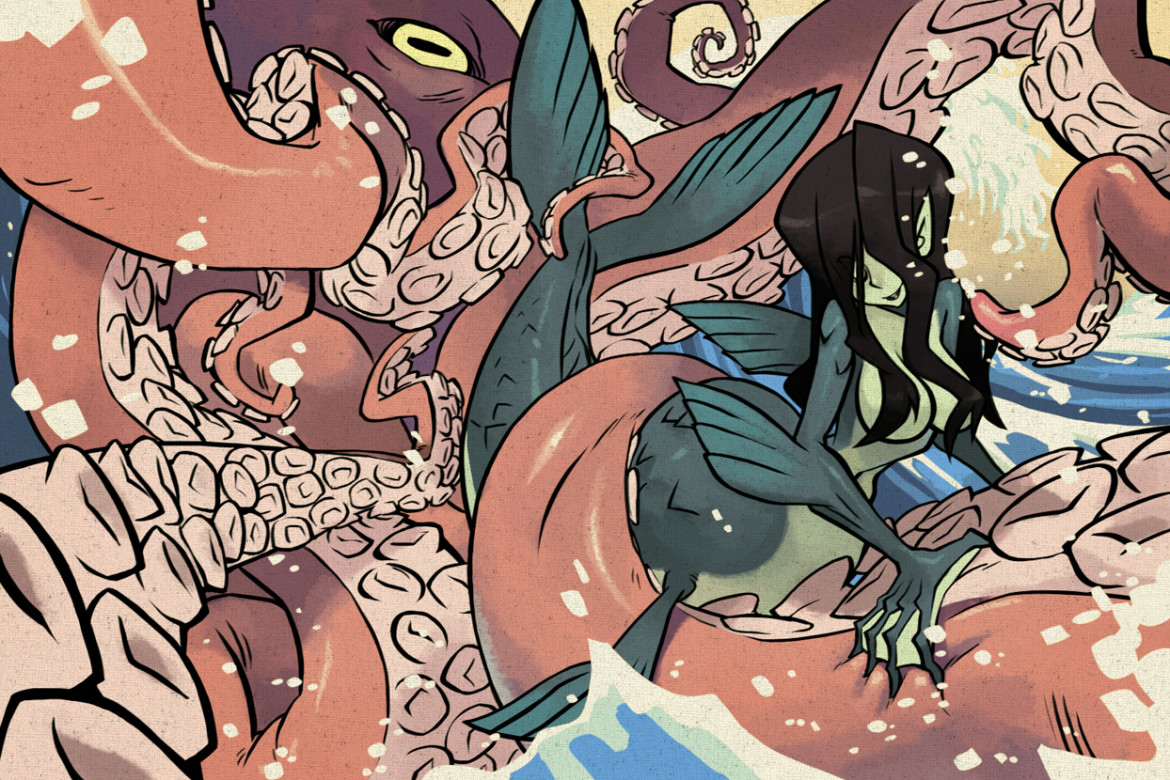 ‘Girl and octopus‘ (2016) by the photographer Kazan Yamamoto

‘Sarah and the Octopus/ Seventh Heaven‘ (2002) by Masami Teraoka

‘Mermaid and octopus‘ by Hiroshi Hirakawa 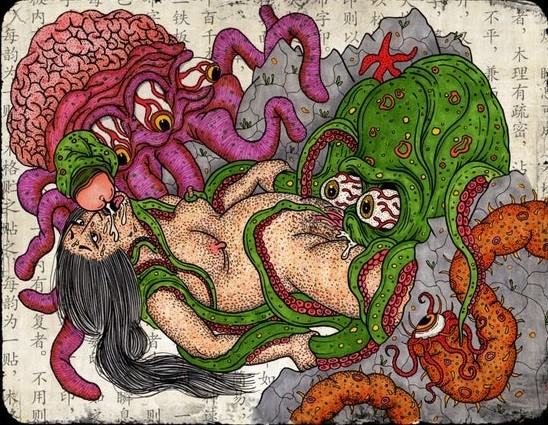 Version of ‘The Dream of the Fisherman’s Wife‘ by Birdsnatcher

“Child” drawing of The Dream of the Fisherman’s Wife 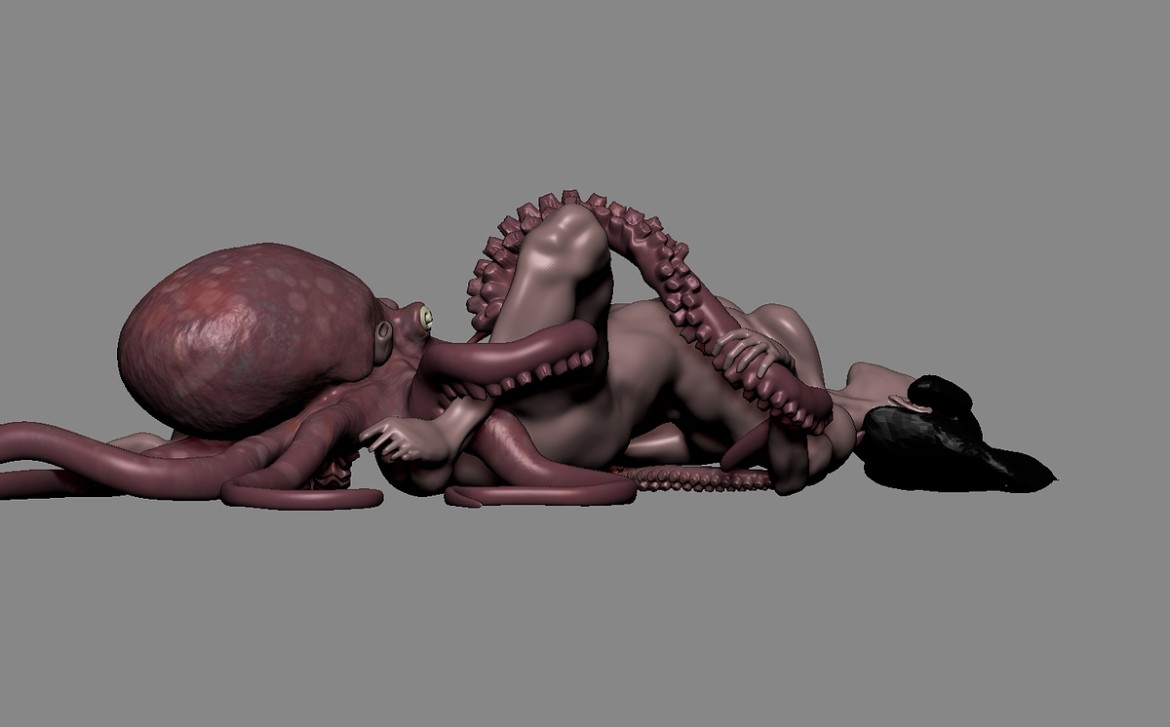 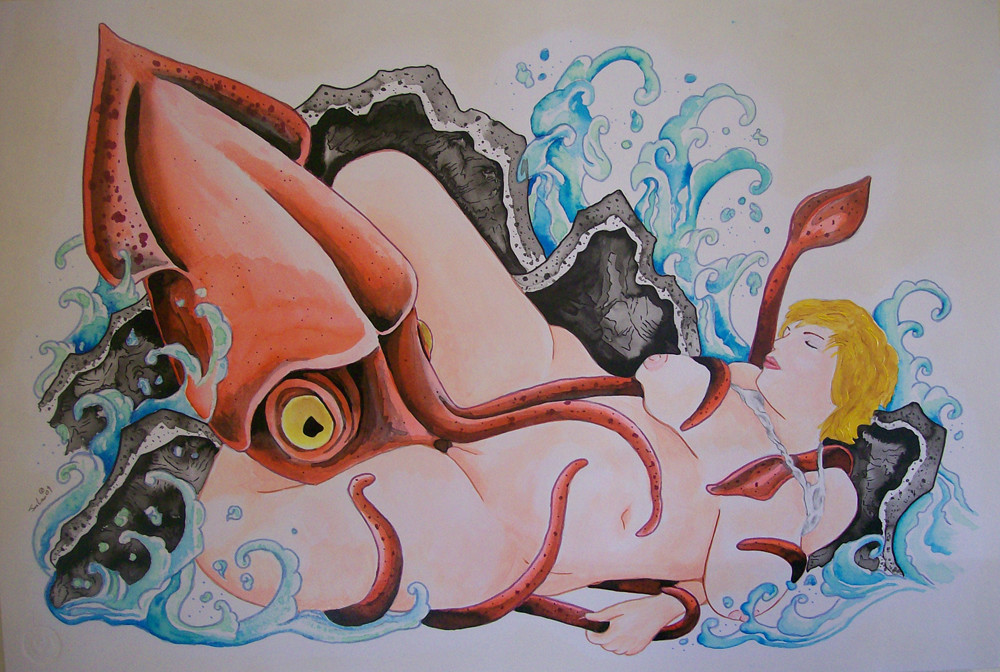 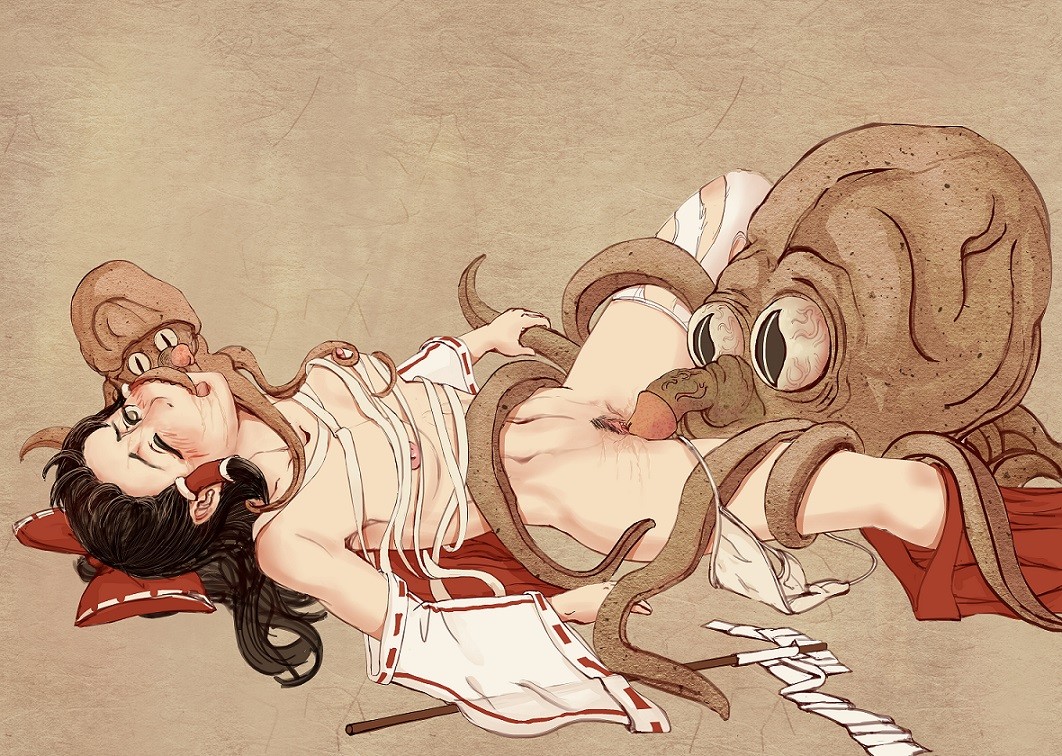 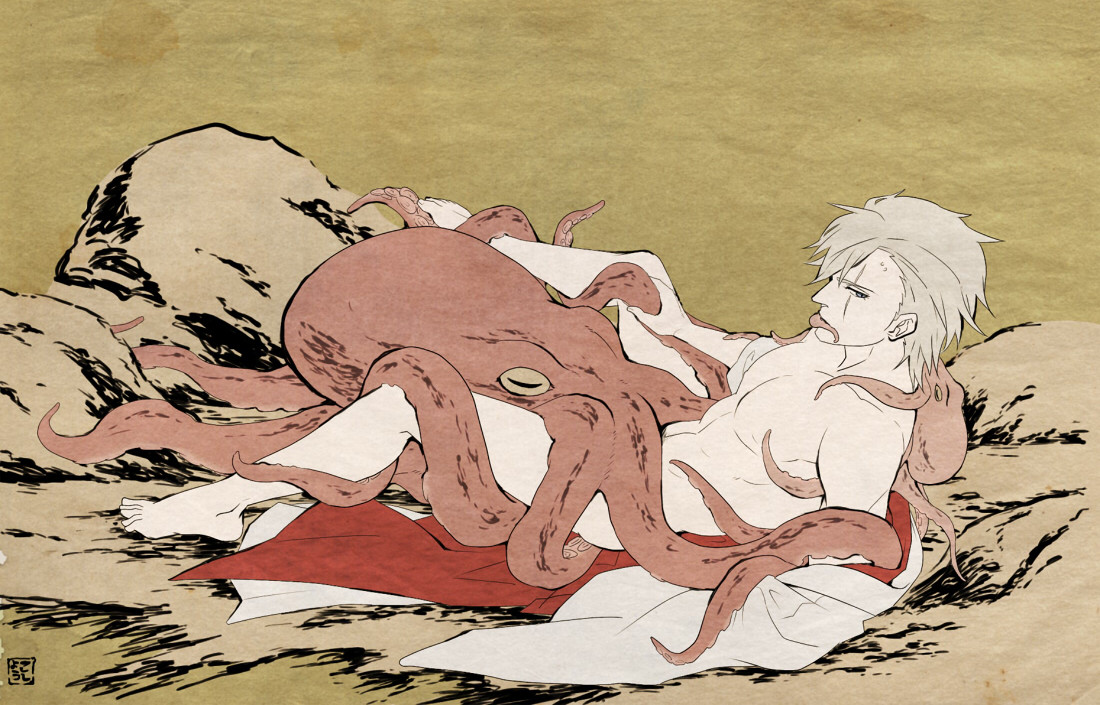 Gay version of ‘ The Dream of the Fisherman’s Wife‘ (Photo from rule34.paheal.net) 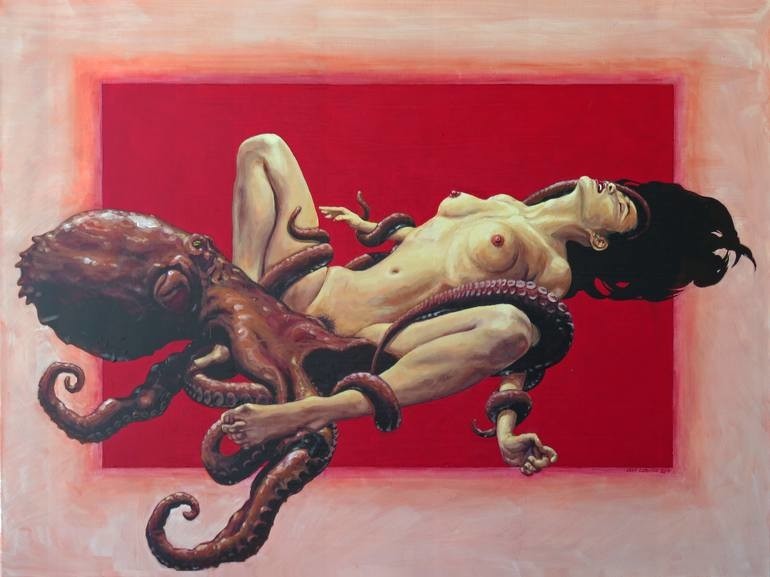 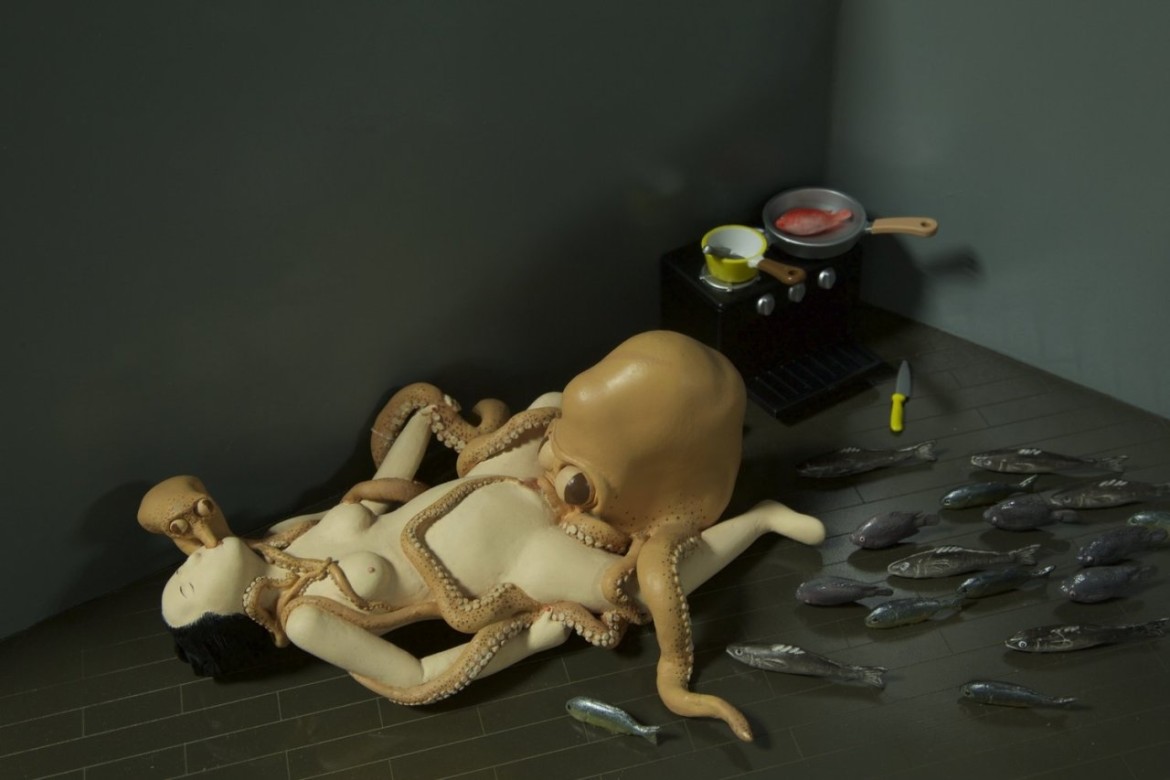 Pre-production of the 2018 remake of ‘The Dream of the Fisherman’s Wife‘ by Yuuya Shimoi (Click here to obtain this rare piece!)

At the moment we are offering a nice opportunity to obtain a genuine woodblock print remake of ‘The Dream of the Fisherman’s Wife‘ print. Click HERE for more info….!!

Do you also share the fascination for Hokusai’s ‘The Dream of the Fisherman’s Wife’ image? What is your favorite artwork depicted in this article?

Thanks a lot Sebastien!

Thanks Peter. Yes, Bellver's pieces offer an original take on the shunga genre!

Thanks for adding this source Stephen. It's indeed a great book...highly recommended!

I was almost late to an appointment with our CPA about our income taxes, but the Octopi adventures were a perfect distraction. Thanks for the sea adventure.

I am glad that I have been able to offer some pleasant distraction James!

Thanks a lot Alan. Hokusai's inspiration is so great that it will be a neverending list.....!!

Best birthday gift! (I receive this newsletter august 9 my bday!)

Thanks Inima, I am pleased you enjoy our eBook and newsletter. Another nice birthday gift would be a nice remake of The Dream of the Fisherman's Wife. You can check it out in our https://www.shungagalleryshop.com/reproductions/dream-of-the-fishermans-wife-print-for-sale" rel="nofollow">gallery shop...!!

Wow...This must be the most comprehensive blog about Hokusai's ama and octopus print that I have come across. So many images! Thanks for paying so much attention to our hidden art!

Thanks Y.Choi, I am pleased you enjoy the article and our site. If you want us to keep you informed, you can download our free eBooks and receive our bulletin twice a week with news about shunga (ancient and modern!). You can easily download the books HERE...!!" rel="nofollow" target="_blank">https://shungagallery.com/e-books/">HERE...!!