Depictions with tattoos in ukiyo-e shunga appear since the mid-eighteenth century but not in earlier hand-painted works. The men wearing tattoos represented the underworld of criminal gangs (yakuza) and highway brigands.

Every now and then, men with tattoos of dragons, gods or symbols of their bad nature (such as skeletons or dice) are portrayed having peaceful intercourse with their lovers but more often they are more often shown committing violent rape. Sometimes these tattooed villains brutalize the woman’s partner or tie him up and force him to watch.

Occasionally men appear tattooed with the image of a woman or name. Most are clearly in love, spying on the woman while she is with someone else. Perhaps the message these shunga were trying to convey was a moral one for society: if you join the Yakuza, not only will you fail to get the woman you love, you might even have to endure seeing her with another man.

Parodies of this subject are also found, such as a woman having intercourse with her lover while holding up a mask of Hannya, a female demon considered to be a guardian of women, to frighten a tattooed man. When Kuniyoshi introduced the heavily tattooed Suikoden Heroes in 1827 he not only caused a tattoo hype in Japan, but all over the world and to this day.

‘Suikoden hero Tanmeijiro Genshogo having sex with the Princess of the Island of Women‘ (c.1828) by Utagawa Kuniyoshi (1797-1861)

‘Tattooed ruffian and lover‘ (c.1827) from the series ‘Prospects for the Four Seasons (Shunka shuto shiki no nagame)‘ by Utagawa Kunisada

Classic design portraying a distracted love-making couple. Kuniyoshi paid elaborate attention to the details of the large back tattoo.

‘Tattooed hoodlum takes his lover from the rear‘ (c.1850) by a member of the Utagawa school

The heavily-tattooed fireman Sashichi is having intercourse with his lover, the geisha Koito. At the end of this tragic love story he will stab her to death. In the heart-shaped cartouche we can see a sedan chair, a lantern and the knife that marks the end of their affair.

‘Tattooed male and geisha on the second floor of a brothel‘ (c.1835) from the series ‘Hana goyomi (Calendar of Flowers)‘ by Utagwa Kuniyoshi (Image by KuniyoshiProject.com)

‘After Kuniyoshi‘ by Alina Bushman ‘Tattooed man with a yūjo (prostitute)‘ (c.1860s) from the series ‘Koi no Minamoto (The Source of Love)‘ by Ikkokai Meshimori 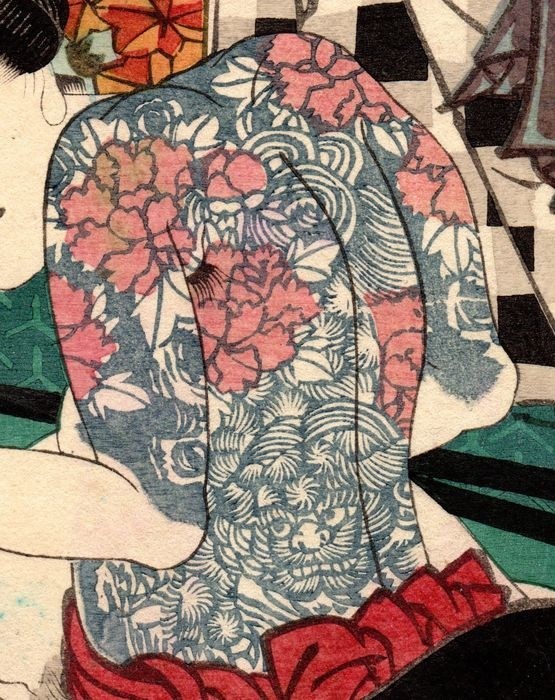 Detail of the back tattoo 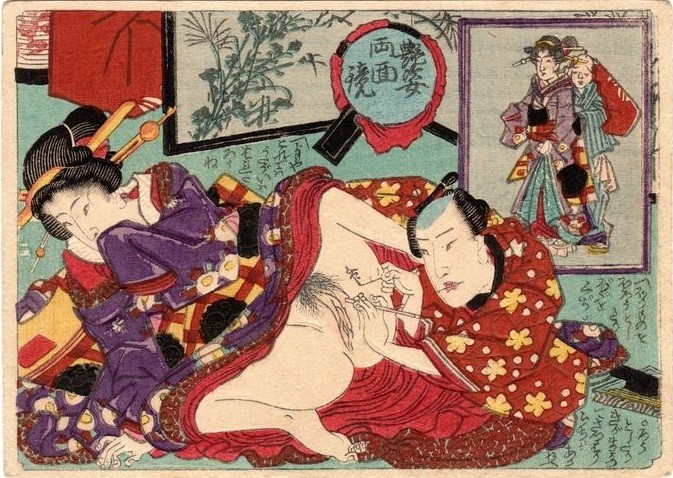 ‘Male tattooing his name to the inner thigh of his female lover‘ (c.1850) from the series ‘Charming Figures: Double Sided Mirrors‘ by Utagawa school 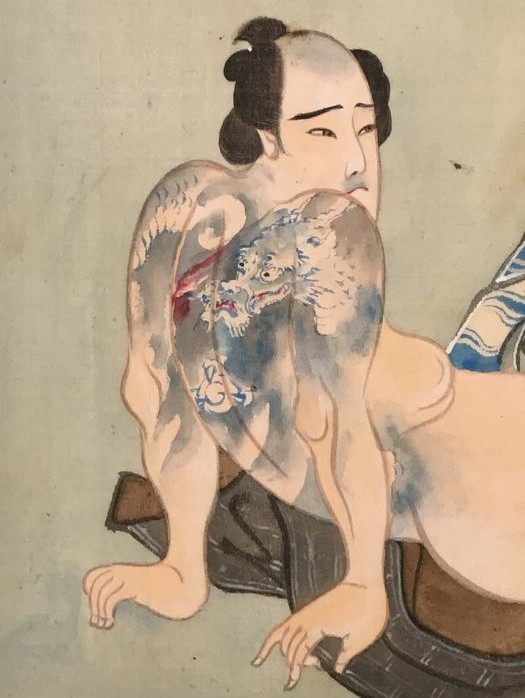 Detail of the previous painting

Contemporary tattoo artists are still using the ancient shunga designs as inspiration for their artwork:

Tattoo of a ‘genital demon‘

Preparatory drawing for a tattoo

Click HERE for striking shunga art by Kuniyoshi that is among the tattoo artists’ favorites…!!!

Some of the above pieces are available for sale in our gallery and the prices can be found by clicking on the concerning picture…!!!

Tattooes depicted in shunga are looking even more spectacular than real ones!

Yes, that's why ukiyo-e (and shunga ) had such a great impact on contemporary tattoo art...!!