What Are the 17 Most Violent Designs in Shunga? (P1)

To name shunga a violent art is exaggerated but violence and death were subjects that were not avoided. Indeed the success of shunga in the 19th Century was certainly also determined by these exploitative characteristics. In this and the upcoming article we’ll countdown and examine what in our opinion is the most brutal shunga design…!

A samurai, his face partly hidden behind a scarf, runs amok in a dormitory. He swings his sword wildly while threatening the old man laying underneath the fallen screen and restraining the young woman. Her subtly exposed private parts help us remember that we are looking at a shunga image. 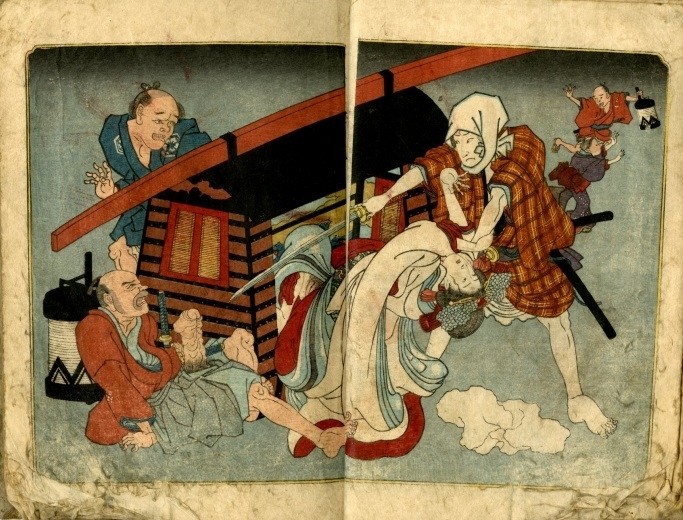 ‘Armed robbery‘ (c.1842) from the series  ‘Shiki no sugatami (Viewing Forms in the Four Seasons)‘ by Utagawa Kunisada

A kago is raided by an armed man pointing his sword at an agitated older samurai who was making love to the female passenger (hence the erection!) inside the vehicle. As you will notice this is a recurring theme in this list!

A male lover is trying to smother a courtesan during their love-making. They are in a small cabin in a low-class brothel.

Painting featuring a ‘Sadistic samurai and a tied girl‘ (c.1890) by an unknown Meiji artist

A perverted samurai, his sword laying on the wooden box in the back, is experimenting with some kind of “clitoris pump” on a frightened girl who he tied to the door.

A spectacular scene with a samurai killing an intruder, by sticking the blade through the transparent latticed-window, while at the same time enjoying passionate sex. The momentum is reinforced by the cushion and the woman’s hair-pin that are portrayed outside the frame. A nice detail is the silhouette of the surprised hand gesture of the dying man behind the window.

A design from Toyokuni‘s series Ikuyo monogatari  (c.1824) depicting the results of a short battle between a samurai, now making love to his lover, and two women (probably his girlfriend’s helpers) who are now running for their lives in the background. The bloody sword pointing in the floor of the room as a silent witness. 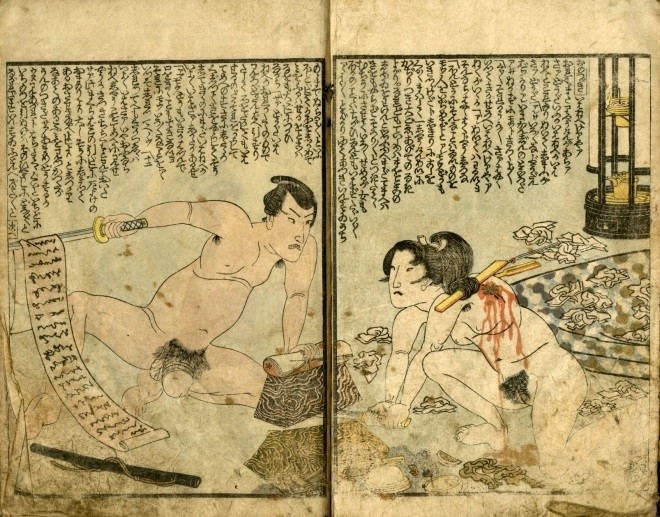 An unpleasant image involving a sadistic masked intruder raping a woman. She is tied to a pole near the doorway while he shines his lantern on her to examine her anxiety. The fallen screen in the background reminds us of the violent interaction that happened shortly before.

A so-called trick-print (shikake-e) with an included flap that when opened reveals another design. The fire flame indicates the presence of fox spirits (kitsune-bi) as is the blue makeup (kumadori) on the face of the tied male.

Like the previous panel of this shikake-e (see 9th place!) the female in the second picture is in the same ominous state of affairs. The woman is nailed down to a giant wooden board with the bully behind her moving his torture instrument.

Click HERE quickly for the second part of this violent shunga countdown !

What Were the Most Arousing Shunga for the Male Reader in the Edo Era?
10 april 2020 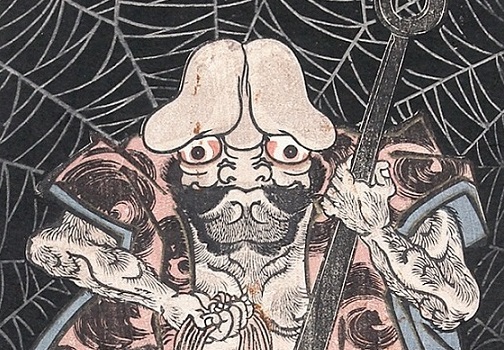