Koikawa Shozan, the Prime Topographer of Sex Inspired By Hiroshige

Koikawa Shozan (1821-1907) was a prolific artist* and was active in both the Edo period as the Meiji period. Although his shunga work relies heavily on that of his contemporaries, he created a lot of imaginative designs. He published numerous books in which he used various pen names and also made the illustrations for the stories.

This work consists of 54 coloured designs, one for each station of the Tokaido plus a flyleaf. Each image portrays an Edo resident having sex with another traveller, a ‘waitress’, country girl or even two males (see image above).

It’s interesting to compare Shozan’s designs with the famous ‘Fifty-three Stations of the Tokaido‘-series by Utagawa Hiroshige (1797-1858). For instance the image above features Fukuroi station and you can find Hiroshige’s version here.

Click HERE for more sensual art by this bold artist…!!

*Shozan was a shunga specialist and he produced around 130 shunga works (mainly books). 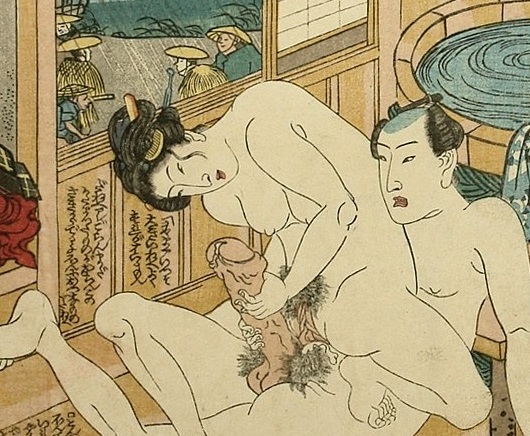 Yes, a sea of grass!