Voluptuous Pastiche on Hiroshige's 53 Stations of the Tokaido Road

The prolific Japanese artist Koikawa Shozan (1821-1907) was given the moniker ‘The Topographer of Sex’ for a reason. His book set entitled ‘Ekironosuzugichi‘ (c.1840s) is a nice endorsement of this.

The stations are depicted in the inserts above the shunga scenes. When I have been able to decipher the concerning station, it is included. 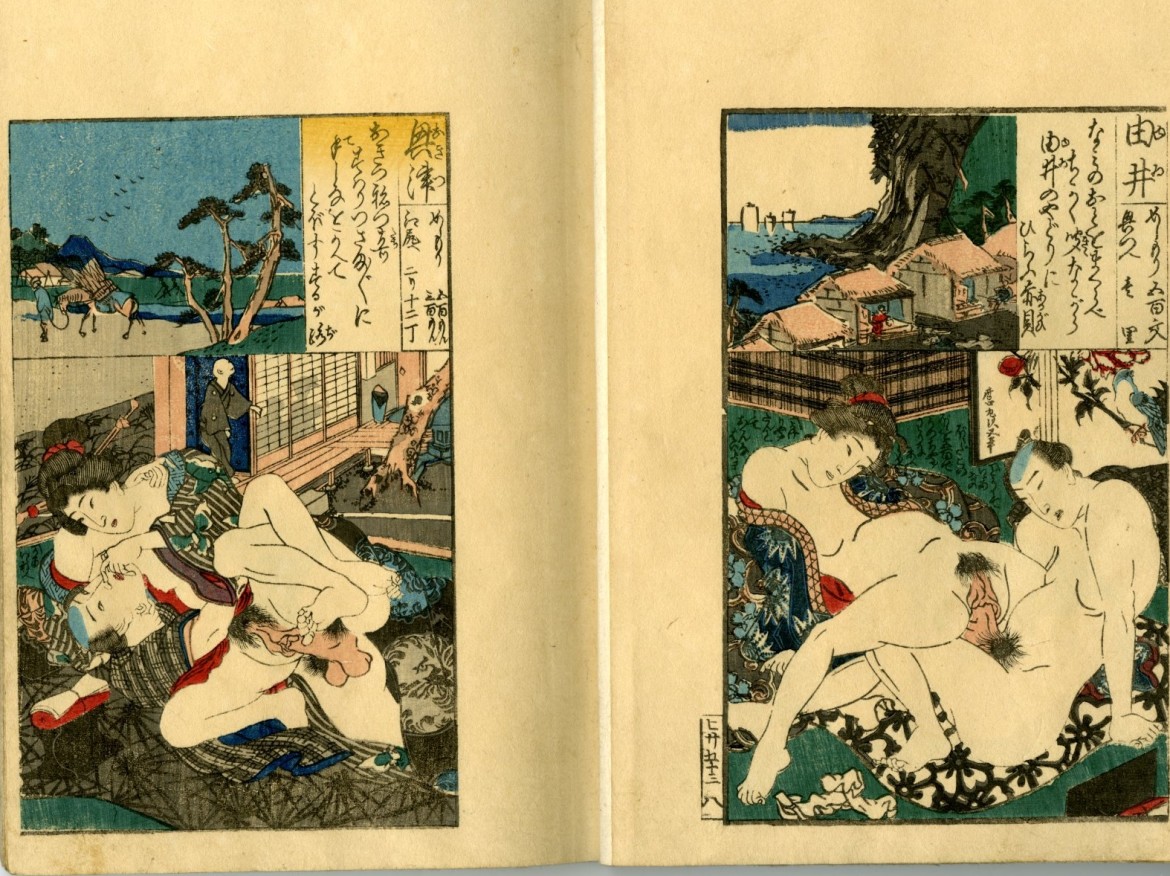 Left: A geisha itches her customer’s nose. Behind them, a bald-headed client (monk) leaves the brothel. We can see the silhouettes of a sensual couple who are visible through the transparent sliding doors behind the monk.

Right: A geisha is entertaining a client while sitting straddle-legged and leaning backwards. The station depicted in the insert is 3rd one called Kanagawa. 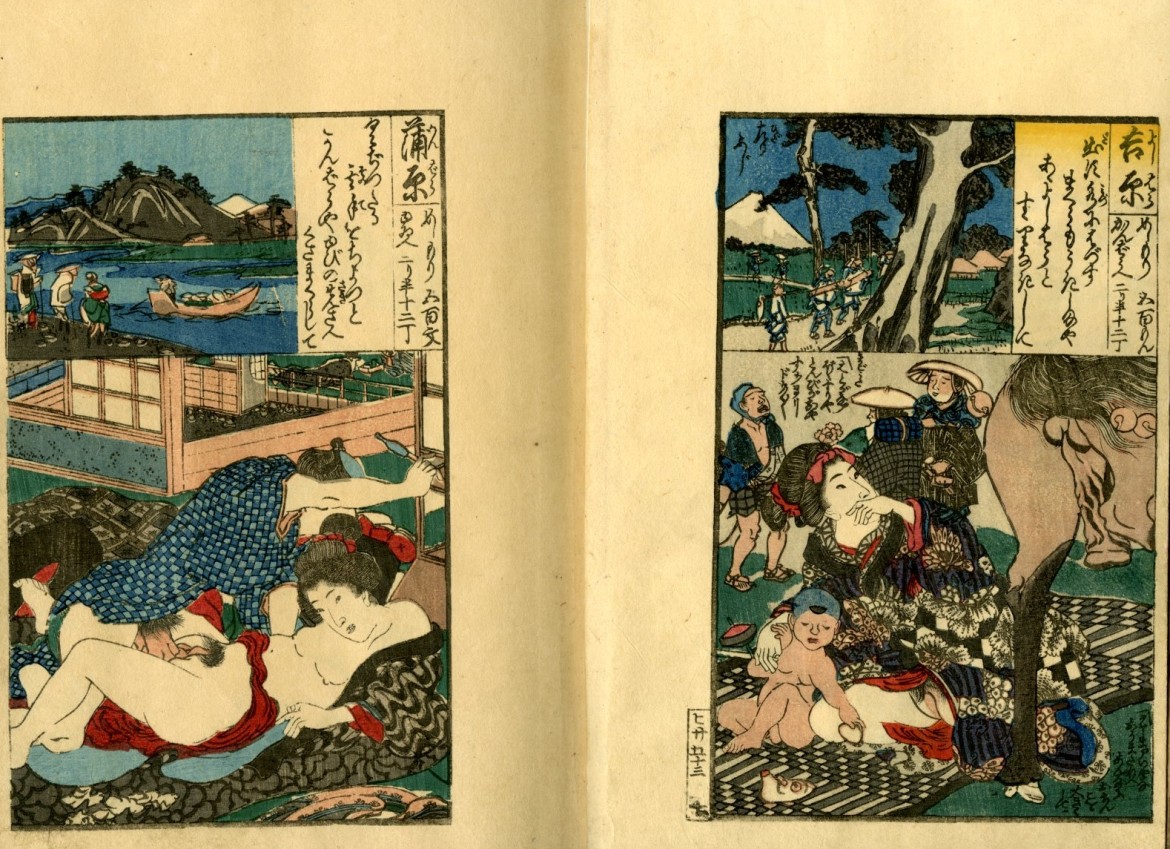 Left: During his love-making a male lover is lighting the lantern behind them.

Right: Amusing scene with a woman and her infant at a market. She is awestruck by the “tools” of the horse standing next to them, while her toddler plays with a shell and a spinning top. 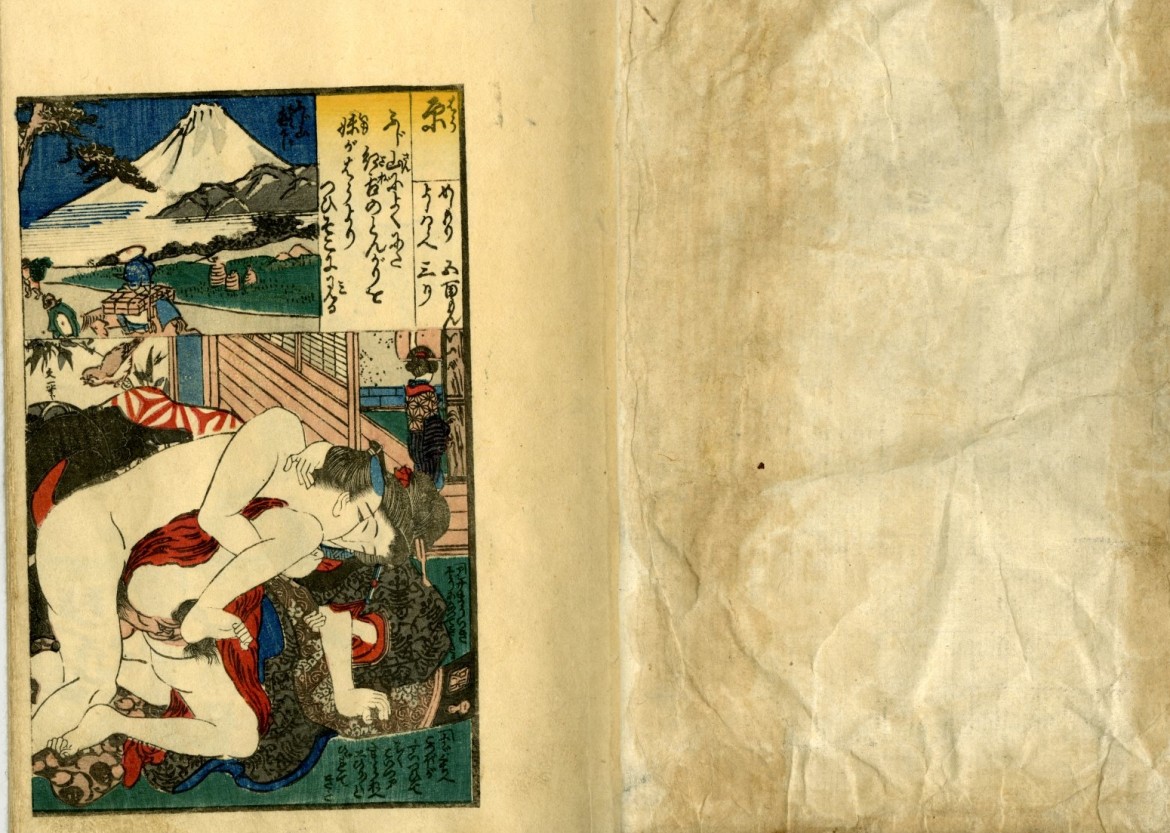 A nude male is penetrating a courtesan from the rear while kissing her sideways. 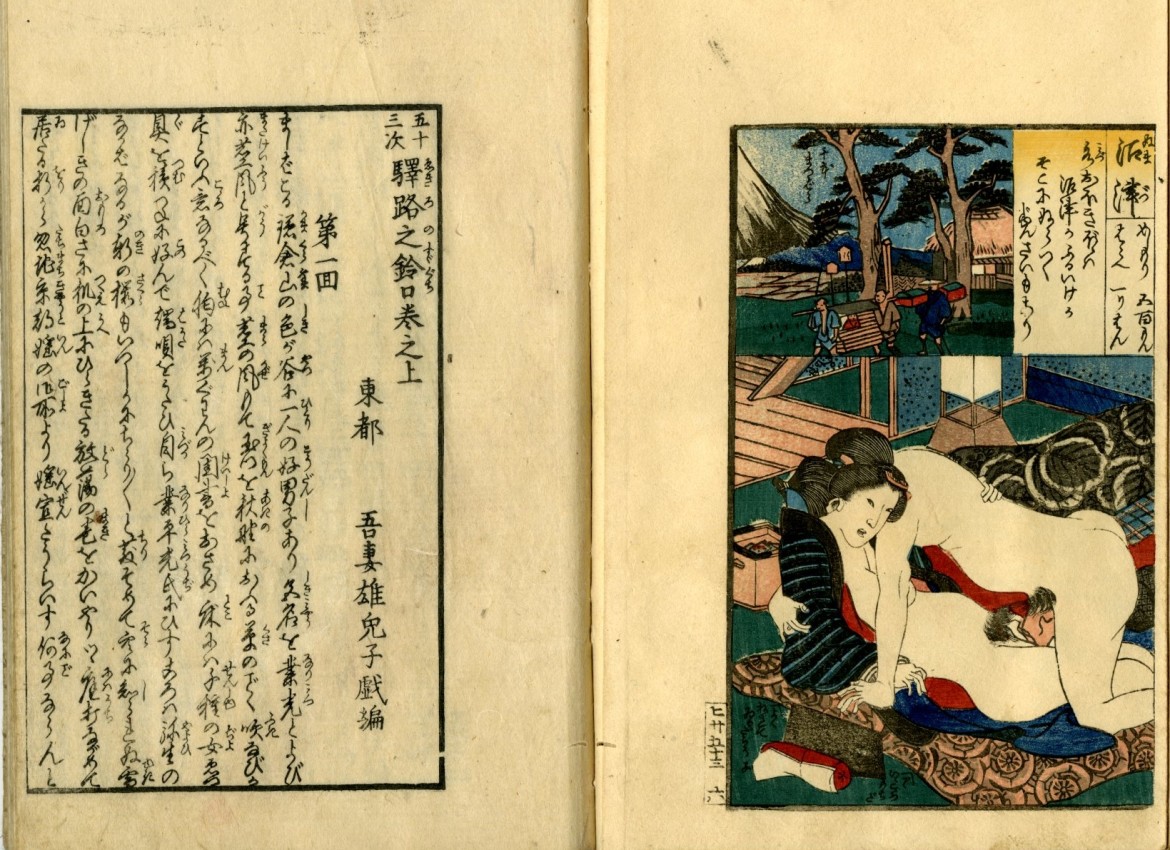 The fallen geisha pillow (taka-makura) is an indication of the passion of this couple. 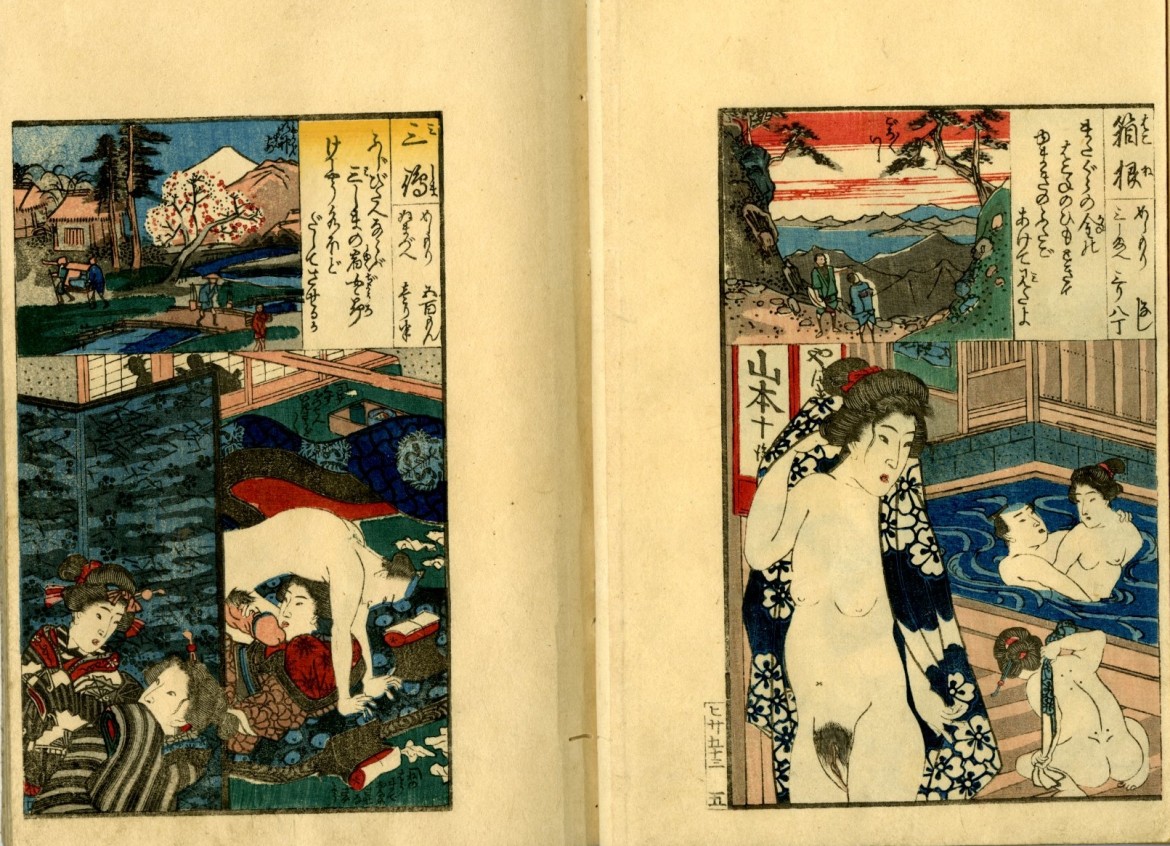 Right: A characteristic “Hiroshige” composition with in the foreground a nude female putting on her kimono after bathing, watching the sensual activities in the bath. The squatting female in the middle drying herself with a towel has moxa burns on her back. 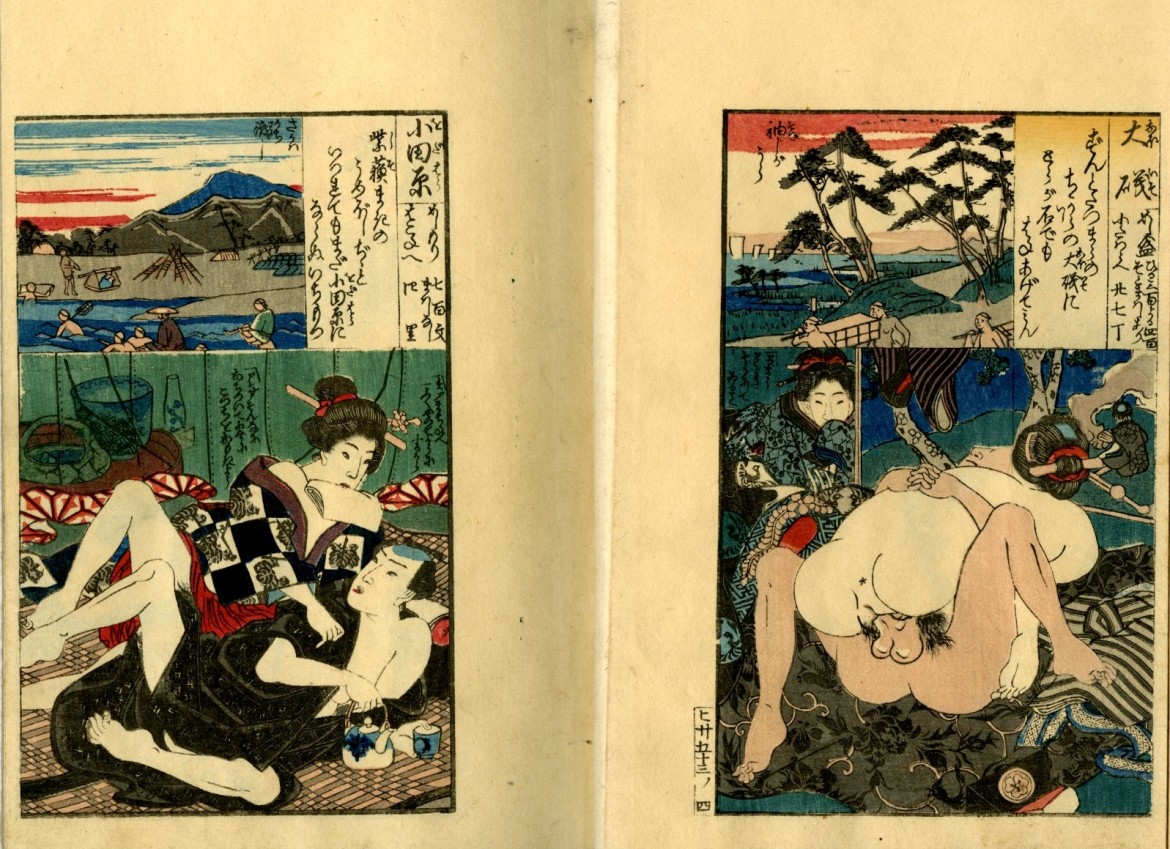 Left: A voluptuous couple, sitting in front a mosquito-net, take a tea break during their intimate session. The insert depicts the 19th station of the Tokaido: Fuchū.

Right: A chubby prostitute is sitting on top of a client, The latter embraces her tightly. They are being watched by a chuckling colleague. 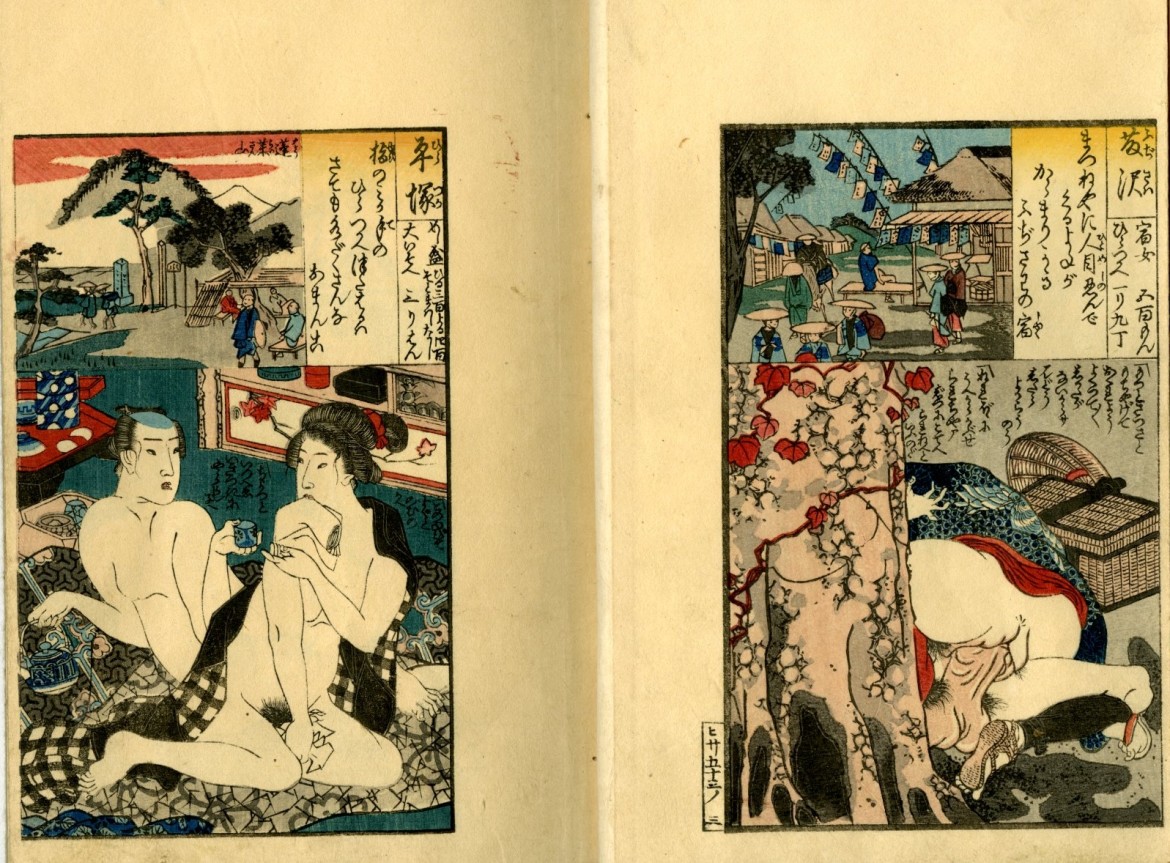 Left: A post-coital scene with an attentive male handing a cup of tea to his female partner. The latter holds a bundle of tissues in her mouth while cleaning her private parts.

Right: A striking composition with the couple only partly visible behind the tree. The man’s black leggings and the hat in the background indicate he is a peasant. 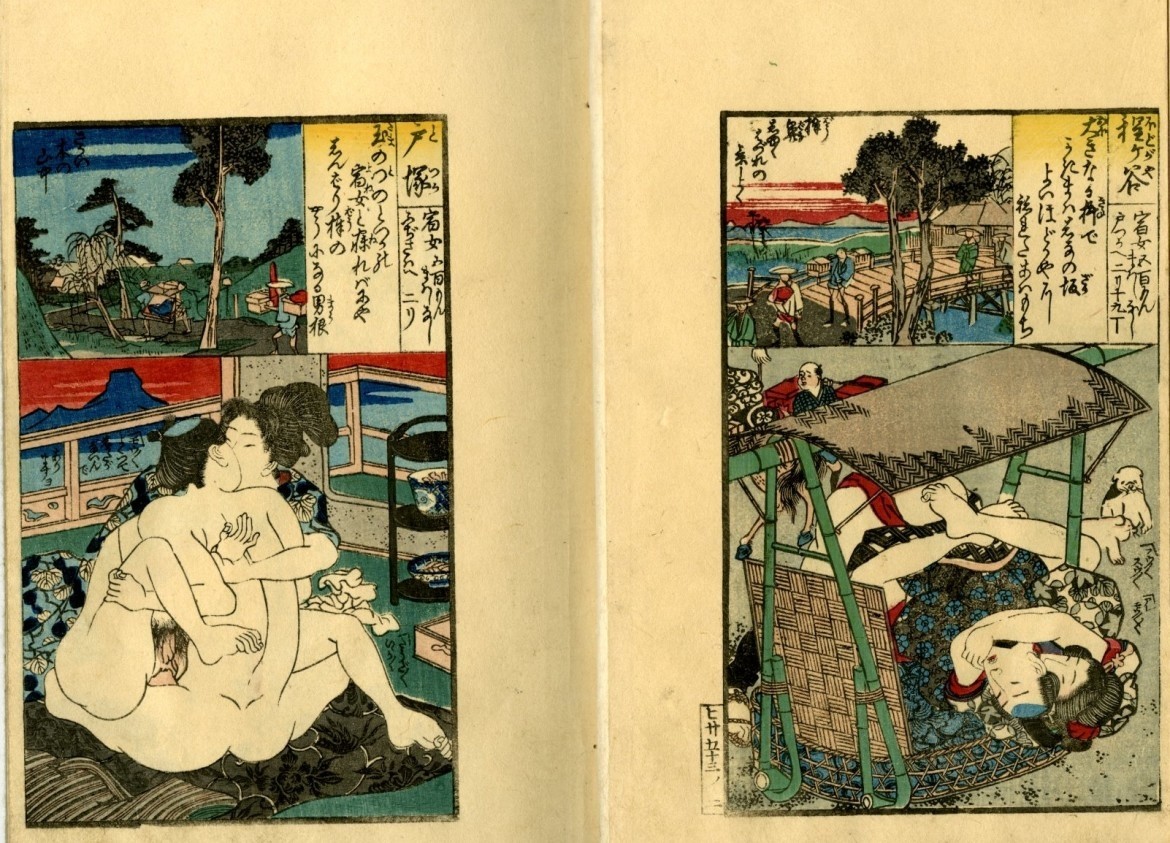 Left: A passionate, almost completely, nude couple make love on a roof terrace during the setting sun. The insert refers to Hiratsuka, the 7th Station of the Tokaido,

Right: A shameless couple makes love on the street in a litter. An amusing touch are the two playful puppies in the background. 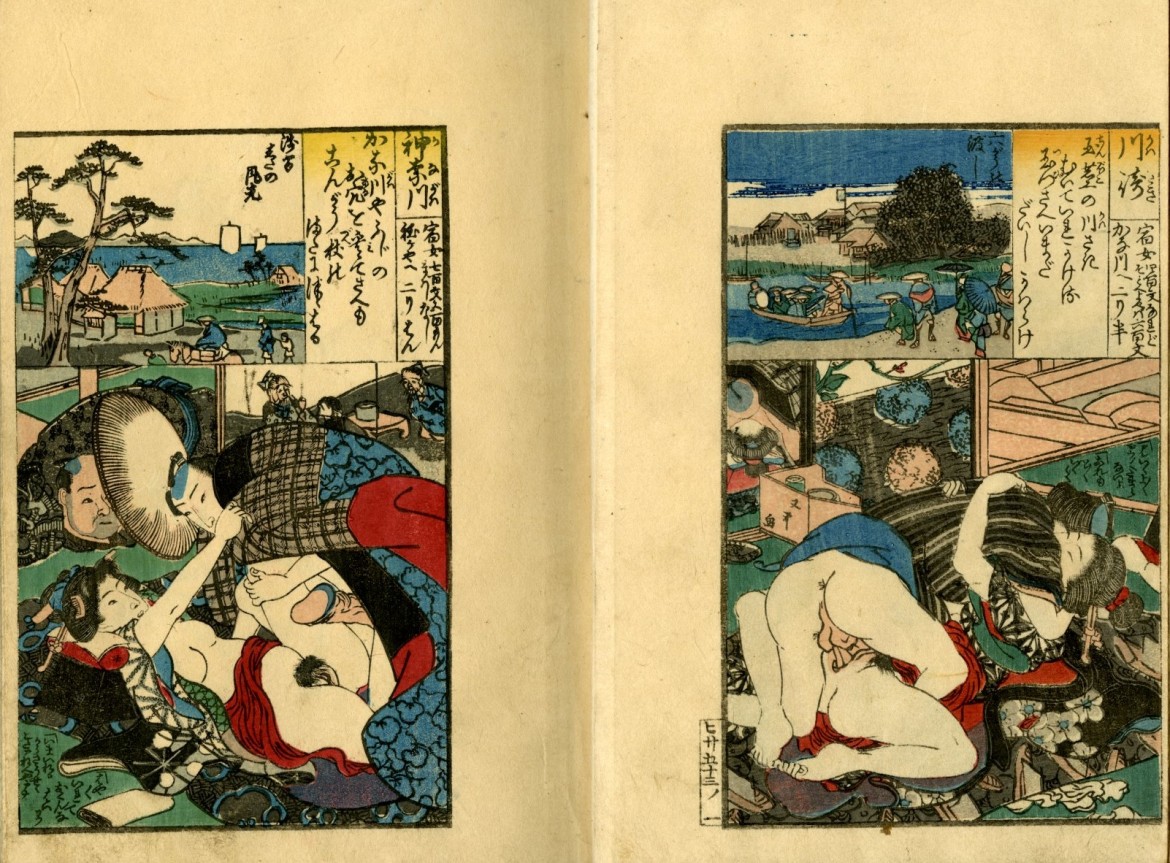 Left: Funny scene with a sneaky male voyeur spying on an intimate couple from behind his wide straw hat.

Right: On one of the floors of a brothel, two customers have fun with some geisha. The 2nd station Kawasaki can be found in the insert. 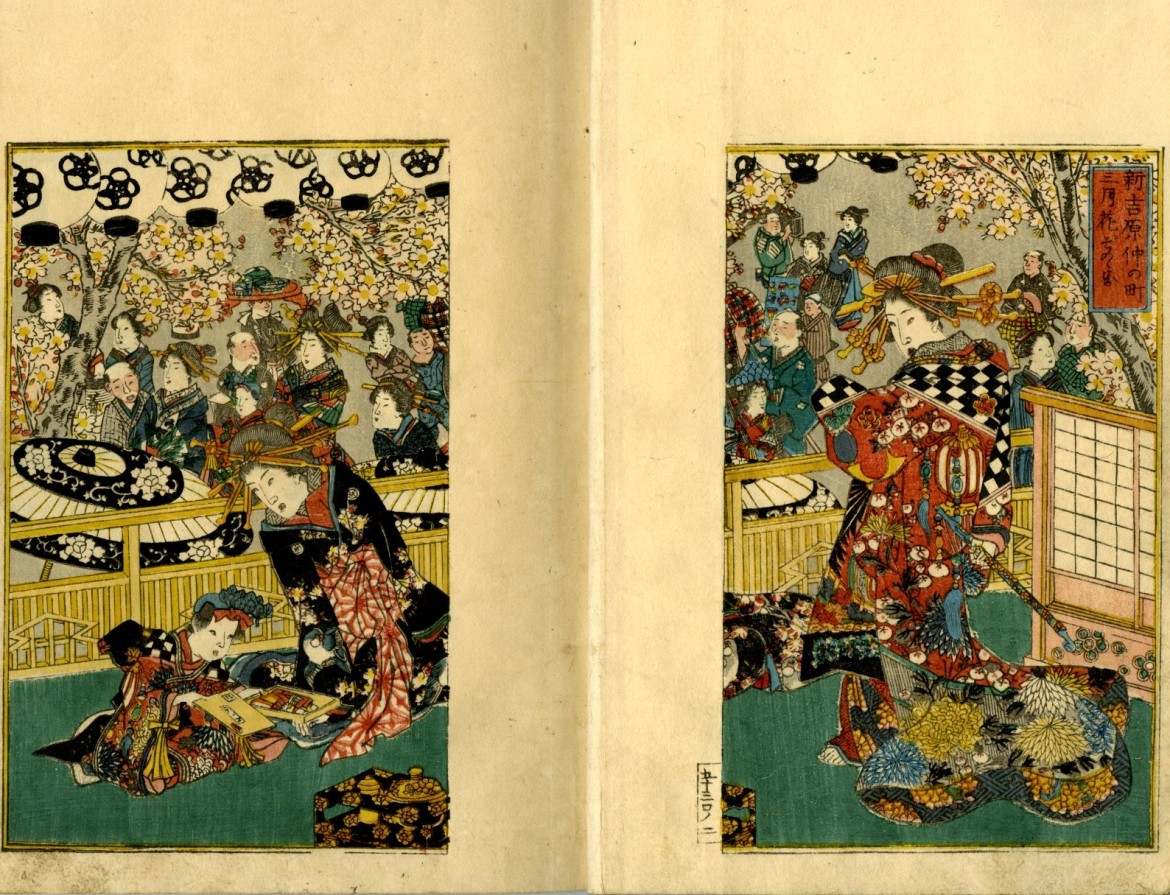 A colorful scene with some high-class courtesans (oiran) preparing for a festival parade. A very young geisha apprentice opens a box with a piece of garment in it. 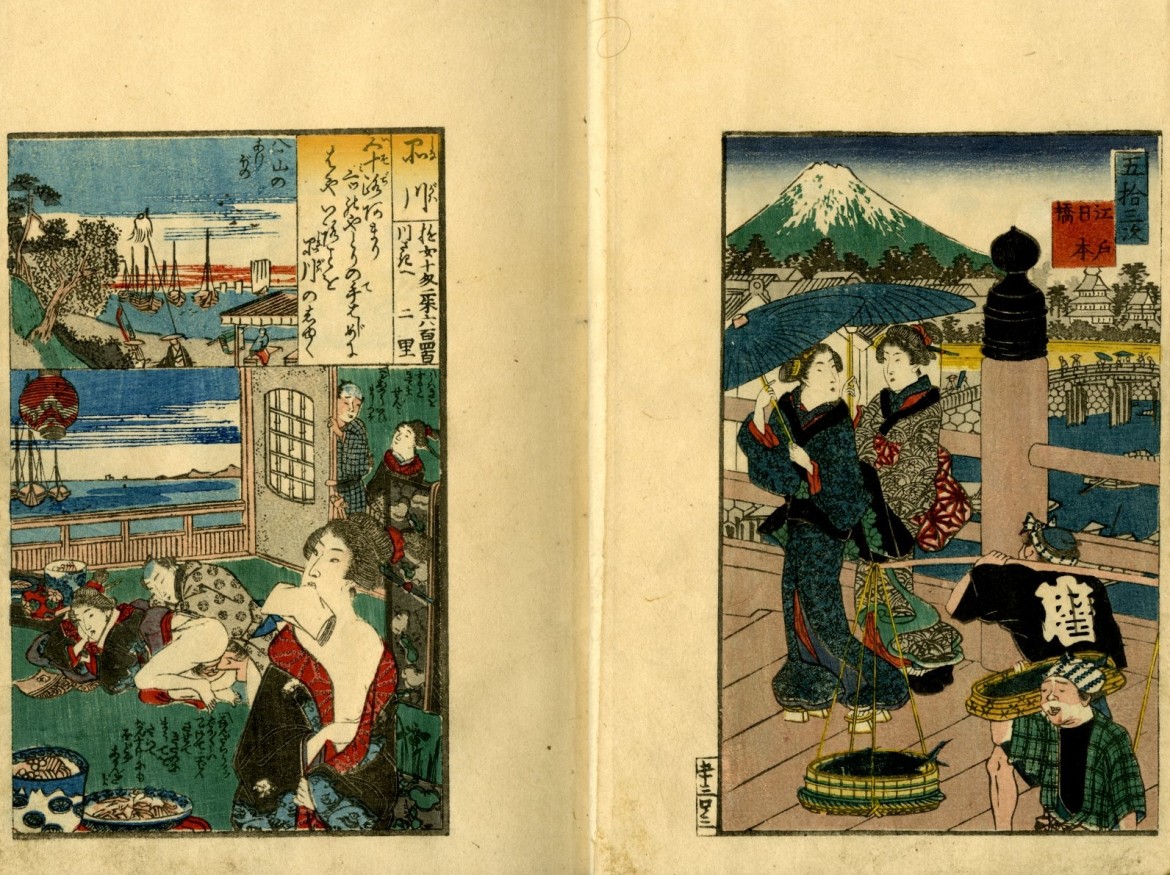 Left: Scene seen from a perspective in which depth is suggested by the geisha in the foreground, the intimate couple in the middle and the harbor in the background. The insert most probably depicts the 1st station Shinagawa.

Right: Charming design depicting fishmongers and geisha on a bridge with Mount Fuji towering over them. 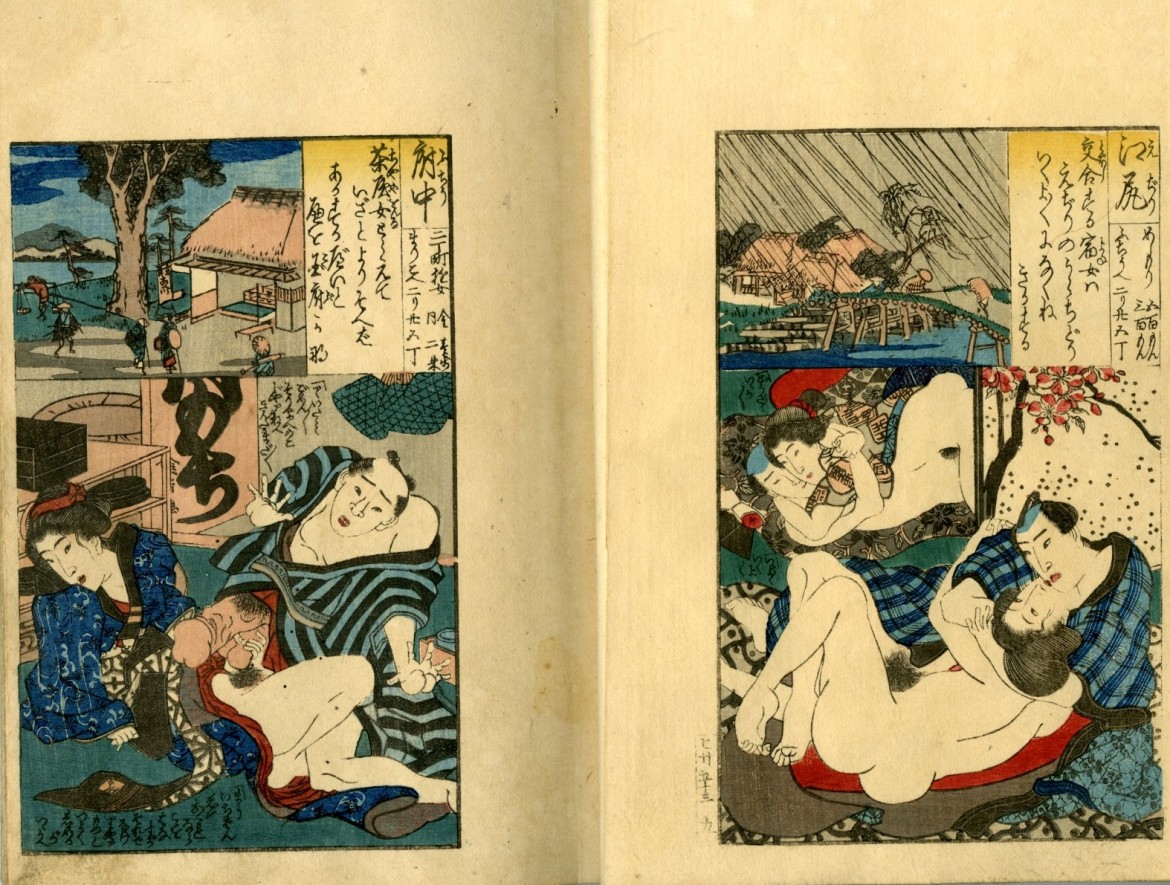 Left: A customer is overcome by horniness when a courtesan caresses his balls. 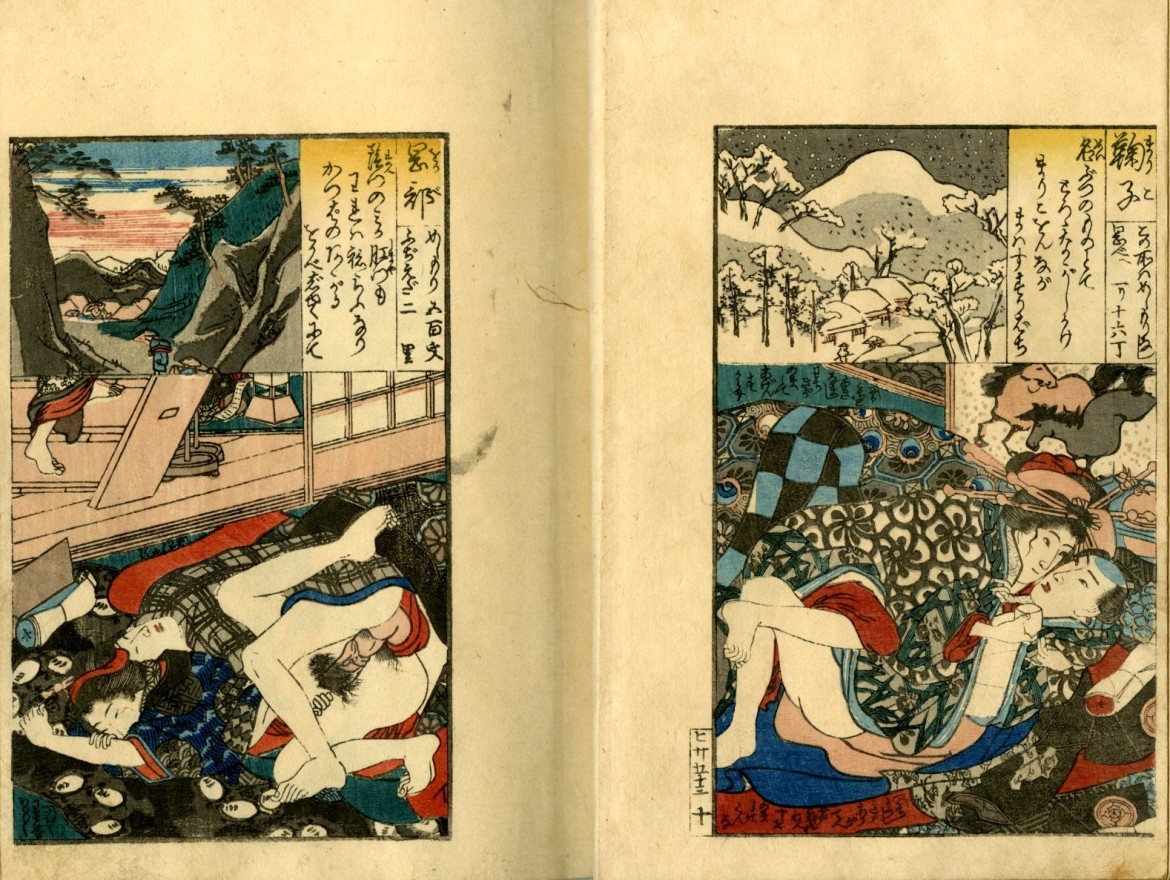 Left: A wild intimate encounter on the bottom floor of a brothel. The 21st station called Okabe can be seen in the above image.

Right: A high-class courtesan offers her wealthy client a drink during their love-making. The screen in the background portray wild horses. The snow scene in the insert most probably refers to Kanbara-juku which was the 15th of the 53 Stations of the Tōkaidō series. 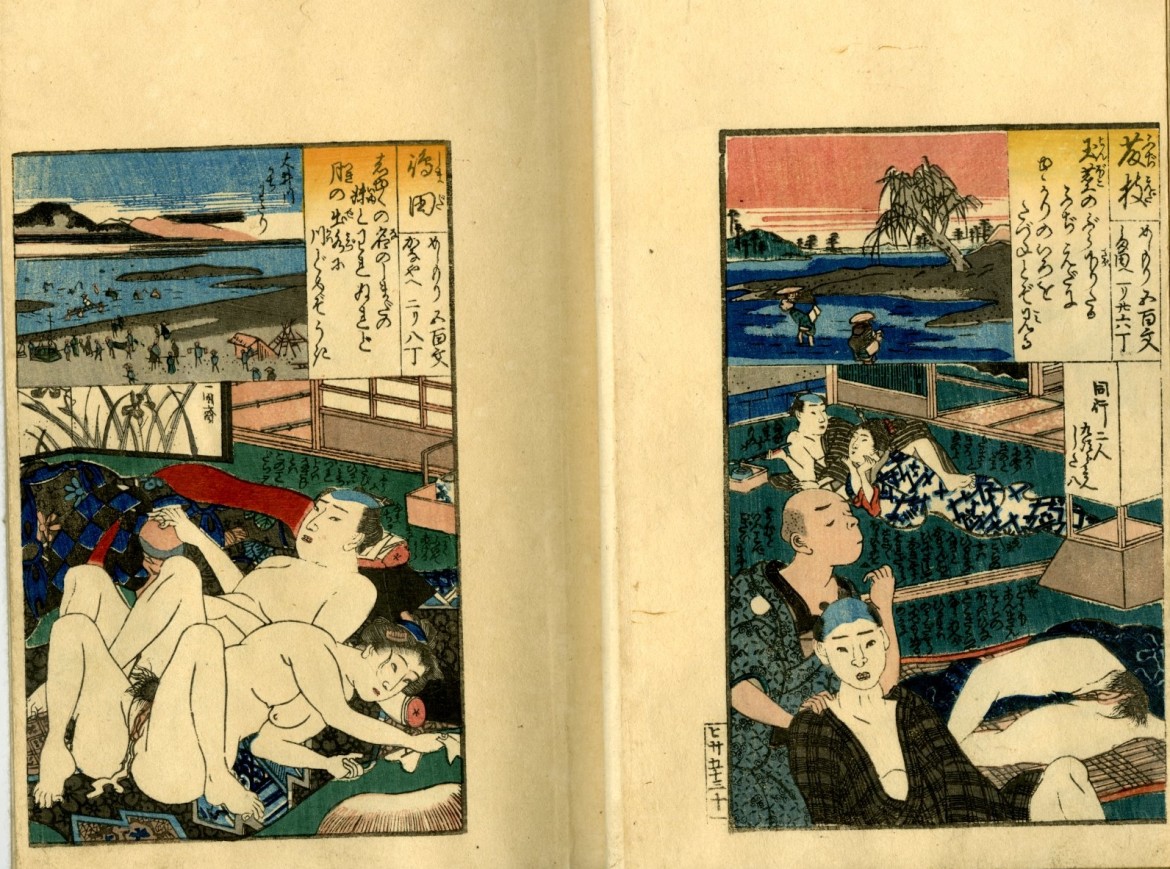 Left: A nude male lover rubs the glans of his penis while his likewise naked lover grabs a tissues to clean her private parts. 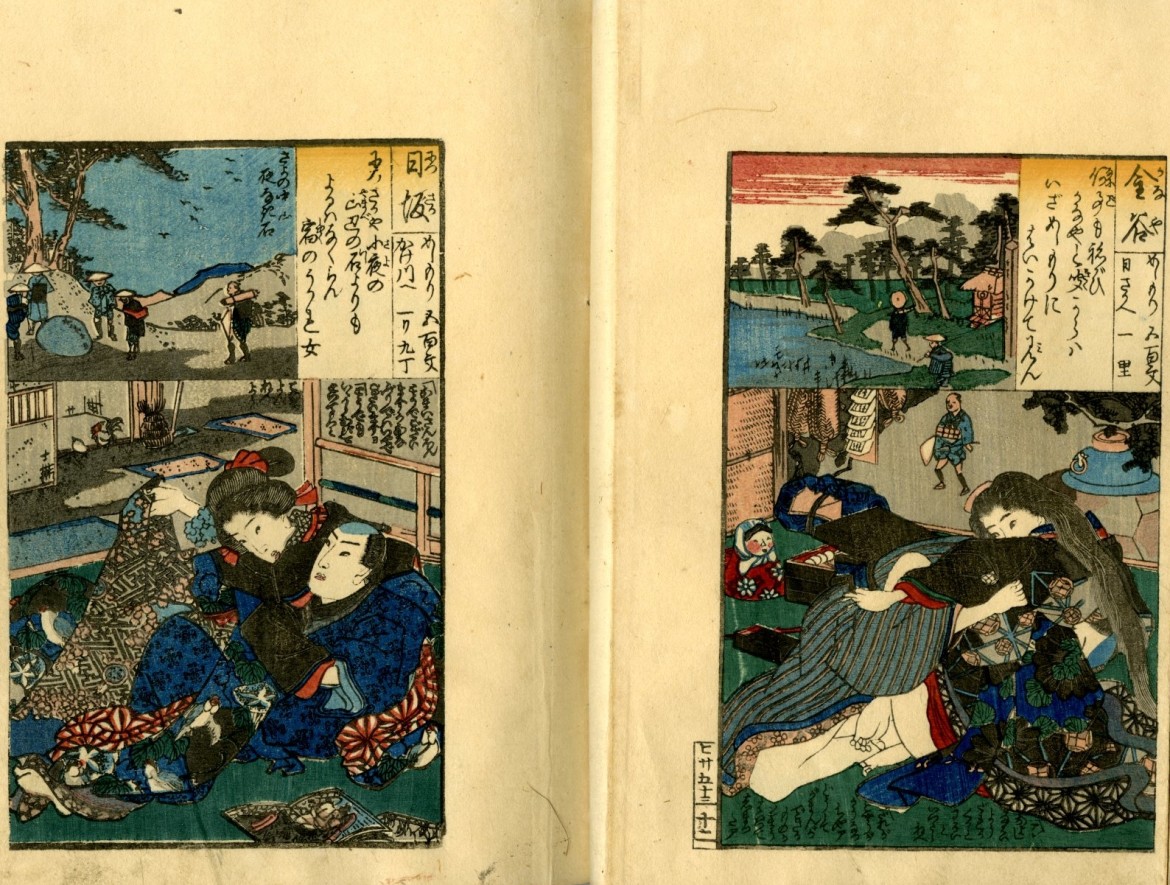 Left: A courtesan and a regular client look for inspiration in the shunga books in front of them.

Right: In a shop a male attendant makes advances to his young lover. A kokeshi doll stands behind them. 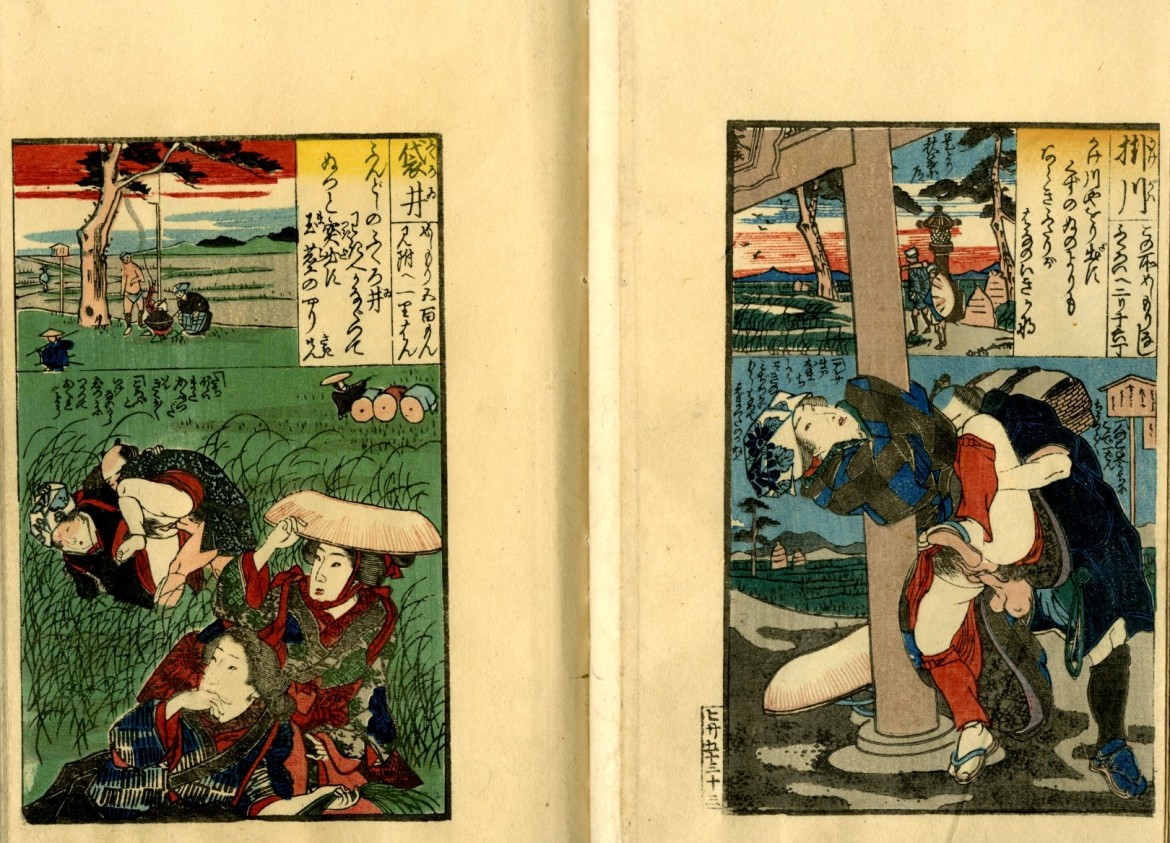 Right: A male and female traveler make love while the latter clings firmly to a temple pillar. 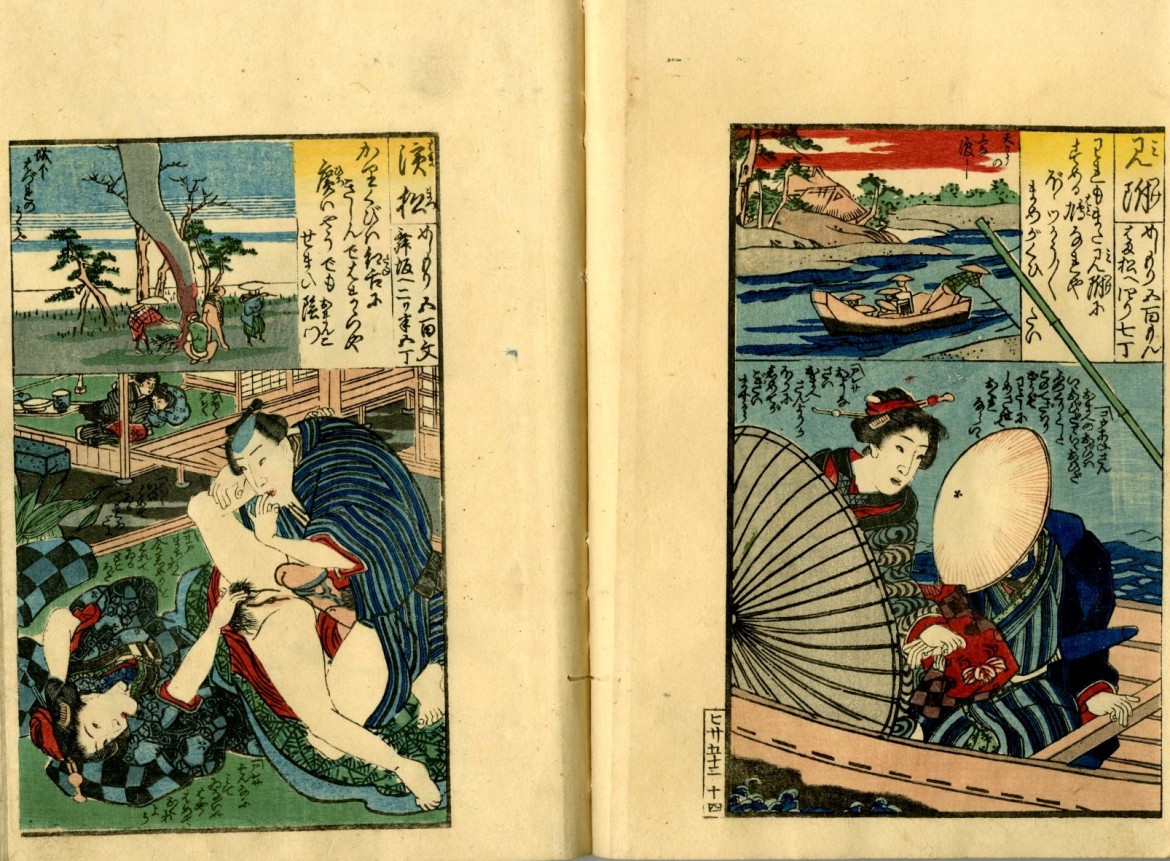 Left: An experienced couple prepare for intercourse while being watched by a young couple in the background.

Right: A mysterious male on a boat obsessed with the unmasking of his identity hides behind a straw hat and umbrella. 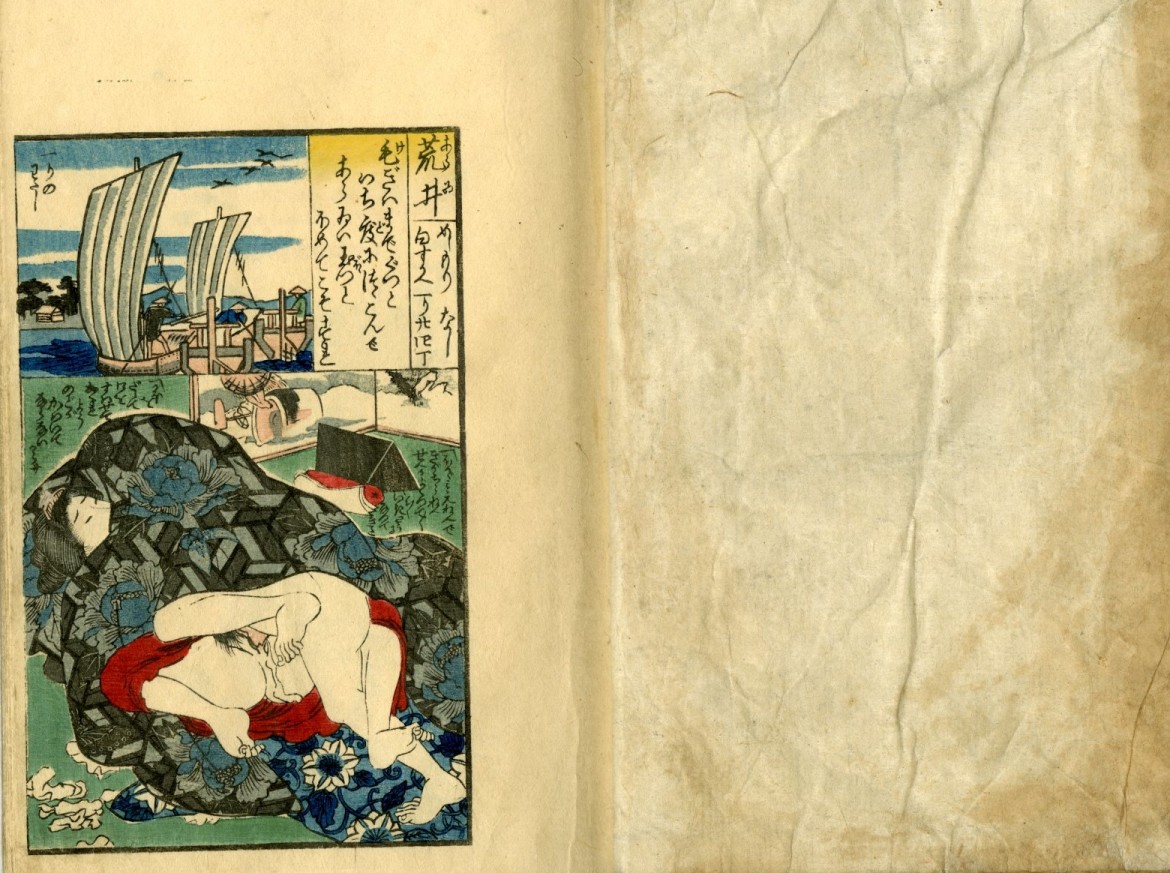 A passionate rendezvous with the couple almost entirely covered by a huge blanket decorated with blue flower motifs. 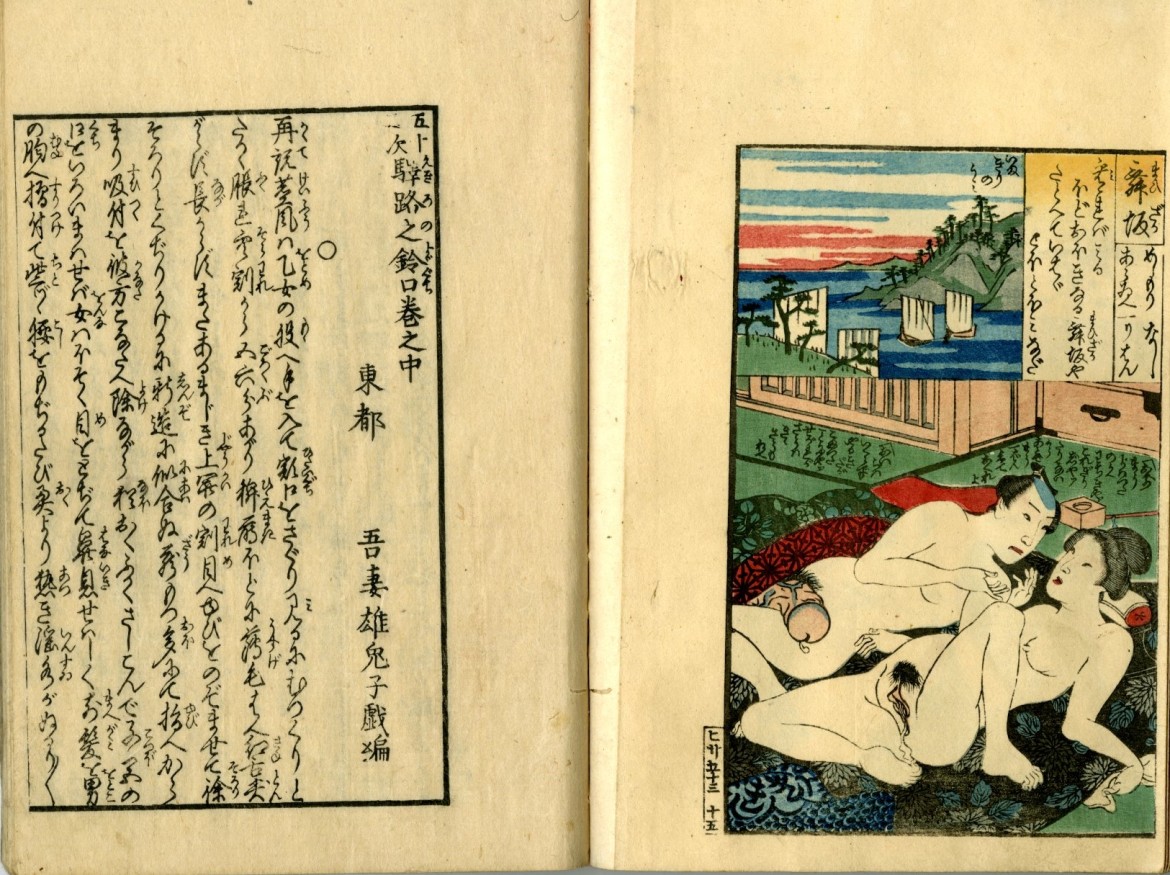 Post-coital scene with the man trying to convince his reluctant partner, who is picking a tissue to clean her private parts, for another “round”.

Click HERE to check out our updated About Now page that explains our new sensual route…!!

Could you advice us on your preferences regarding the subjects of our articles? Let us know in the comment box below….!!

Thanks a lot PaMar and you are absolutely right. I have made the correction. Working on a lot of content and then it is almost inevitable that you sometimes overlook (important) details! Thanks again, and I am pleased you enjoy our content.