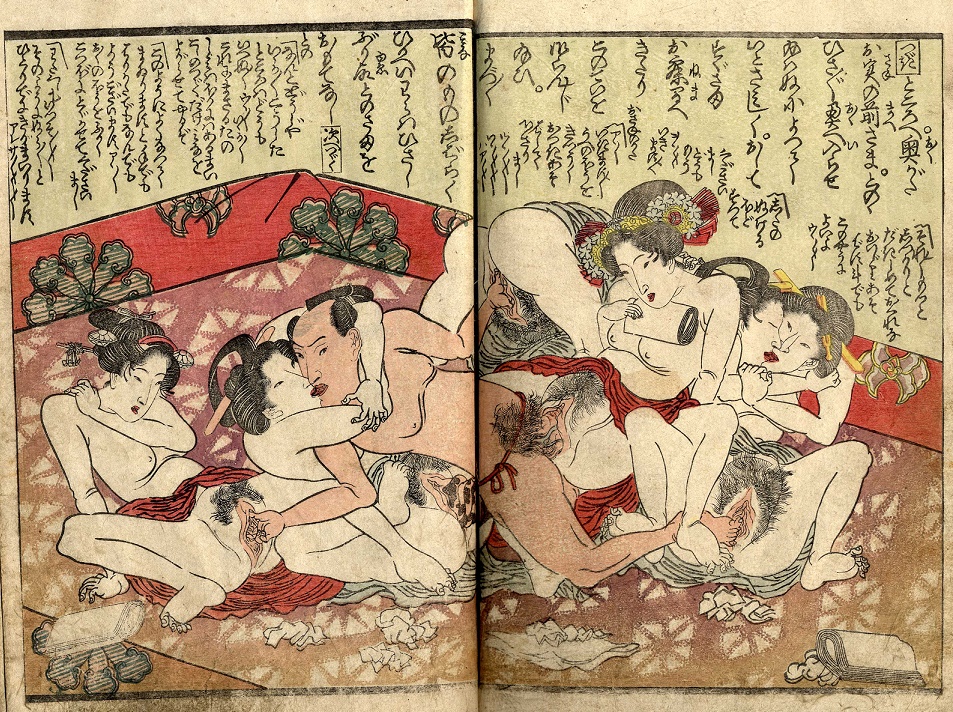 Utagawa Kuninao (1793-1854) was a ukiyo-e painter, print artist and illustrator. He first studied Ming painting, then ukiyo-e under Toyokuni, and later he became a follower of Hokusai. Kuninao was a prolific artist, illustrated many books, and his work was popular. Although productive, his work is now scarce.

In the shunga book series ‘Wakamidori‘ (c.1827), Kuninao shows his great sense of humor. It’s in the characteristic Utagawa school-style of that time but he adds many comical details. The designs are strikingly phallus-oriented (with many phallic sex toys), as if the penis is a character on his own.

The hilarious facial expressions of the male protagonists are a real treat. They remind me of the character actors from the film noirs of the 1940s who gave color to these films.

Fig.1. ‘Unfortunately I don’t have the translation of the added Japanese text but at first glance the standing man with the stern gaze is interrogating the three nervous males in front of him. He is picking his teeth and holding a hair-clip of the “indecent” female next to him.’ (c.1827) from the series ‘Wakamidori‘ (c.1827) by Utagawa Kuninao

Fig.4. ‘A bacchanal with delirious participants dancing around. One of them is still wearing a black kimono, guiding the crowd with a baton while balancing a cup of sake on his penis. A completely nude geisha sleeps off her hangover while resting her head on a shamisen.‘

Fig.5. ‘Additional scene to the previous image with another tipsy couple entertaining themselves.’

Fig.6. ‘A male wearing a scarf and carrying a sword is sticking his arm through a hole in a window. In the following image, the mystery around the arm will be revealed.‘

Fig.7. ‘Follow-up scene to Fig.6. with a courtesan entertaining a simple-minded male with a massive erection while a secret hand caresses her private parts.‘

Fig.8. ‘A furious man (his veins swollen on his forehead) addresses a subordinate while his enormous erection draws the attention of the female servant. ‘

Fig.9. ‘A samurai and his lover passionately kissing.‘

Fig.10. ‘A shocked female is watching two copulating cats on the roof.’ from the series ‘Wakamidori‘ (c.1827) by Utagawa Kuninao

Fig.11. ‘In a secret cellar, a dominant female figure (preparing her tobacco pipe) negotiates with a submissive man who is holding a book. Their  conversation (and her subtly exposed private area) is carefully followed by a number of striking spectators.’

Fig.12. ‘Surreal scene with the lucky god Daikokuten (God of the five cereals) standing on his phallus-shaped duffel bag while he conjures up all kinds of shells from his phallus-shaped magic wand. The posing Daikon (long white raddish) is even more remarkable.‘

Fig.14. ‘Following on from the previous image, we are witnessing some kind of esoteric “phallus ceremony” with awe-inspiring participants.‘

Fig.16. ‘Two couples in the introduction phase of love-making..’

Fig.17. ‘A scene displaying the involuntary encounter between three clumsy males and a desperate female.’

Fig.18. ‘Tranquil image with seven birds in the water.’

Fig.19. ‘Rustic scene with five birds in the water.‘

Fig.20. ‘A wealthy samurai is entertained by two young geisha. The room overlooks a stream with a small bridge.‘

Fig.21. ‘A risky scene (abuna-e) with a young male making advances to his lover by grabbing her pulse. They are sitting near the porch where there is a flower pot with red peony*. The latter has caught the attention of two butterflies.‘ from the series ‘Wakamidori‘ (c.1827) by Utagawa Kuninao

This book set will be available for sale at short notice. If interested, you can inquire about it by clicking HERE now.!!

*In Japan, the peony symbolizes wealth and prosperity. The red peony is the most prized, and is believed to have the strongest ties to honor and respect. 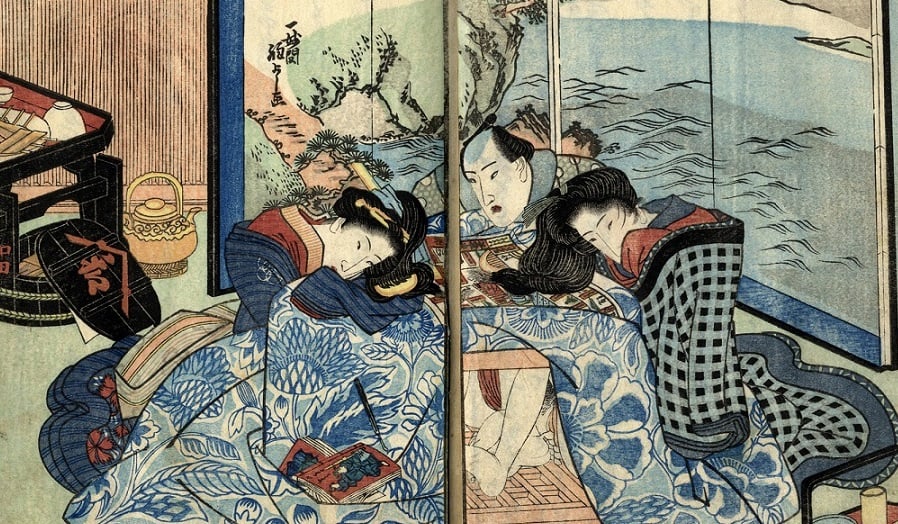