The young boy depicted here is a so called temple page (‘chigo‘ or ‘terakosho‘ ), they were available to monks, who were regarded without censure as among the most avid adherents to the so called ‘Way of the Youth‘. As often with male-male depictions in Japanese shunga, one of the depicted persons – taking the active role – is an older man (‘nenjo‘ ).

The receptive partner (‘wakashu‘ ) was invariably a pre-pubescent or pubescent boy or a young man who has not yet shaved off his forelock, a sign in Japanese society that he had not yet come of age. Male-male relationships, within the samurai class and in monasteries between monks and their young acolytes, were a common phenomenon in Tokugawa Japan, as was prostitution among young kabuki actors of female roles.

Detail of the above print

The size of this rare print is quite uncommon; a half-size horizontal oban design would have been carved on one half of a woodblock, with another design carved from the other. This design is most likely from a set of twelve prints issued late in Utamaro’s life. Striking is the inro* on the floor behind the young man’s head. The young male holds on to a geisha pillow while he undergoes the sensual “violence” of his older partner.

In our Premium section, you can find an extended version of this article including similar designs

*The inro is a traditional Japanese case for holding small objects, suspended from the obi (sash) worn around the waist. 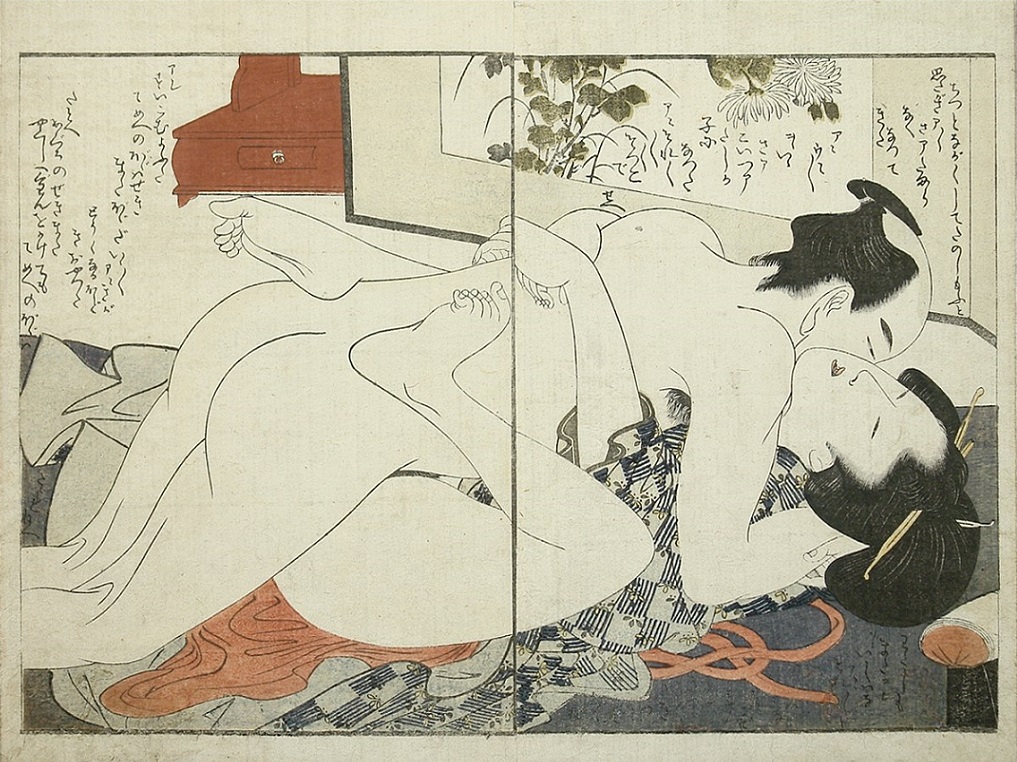 I was sure that the difference of ages of partners in homosexual shunga was used to make the difference of their penises logical or explainable. A partner, who's taking an active role, has an exaggerated penis and so he is an old one. A passive partner has small genitalia and due to his passive position he tends to be a youngster. That seems to be right, but I was surprised when I faced a gay shunga by Kitao Shigemasa from 'Enpon tokiwa no matsu' series (ca. 1770), where an intercourse happens between two obviously young boys (their forelocks aren't shaved), but their penises still differ very much.

Thanks Darya, we are working on a new eBook on Nanshoku (male-male sex)hat will be issued in April (May). In this book (that will be loaded with excited images!) we'll discuss this specific theme in more detail...! Scenes, like the one of Shigemasa, with two young males is a rare sub-theme within gay shunga!