Yashima Gakutei or Hokusai? Who Designed These Amazing Shunga Books?

Personally, I think it is quite possible that this is a work by Hokusai himself (as there are many references to other of his prints) in which he experimented with certain designs. Also, stylistically, it bears all his characteristics (the “pointy” fingers and toes, the curved neck – Fig.26 and 27, the idiosyncratic Hokusai poses).

The designs have fine impressions, color and very good condition. Some tiny wormholes, minor browning and staining but overall in a very nice state with fresh colors. The books consist of no less than 23 double page color illustrations and 6 single color illustrations. Size of each book: 8 4/5″ x 6 1/5″ inches.

The prints are lavishly printed including gold and silver pigments and embossing.

Anyhow, for the first time ever on the internet you can now admire the set in its entirety… 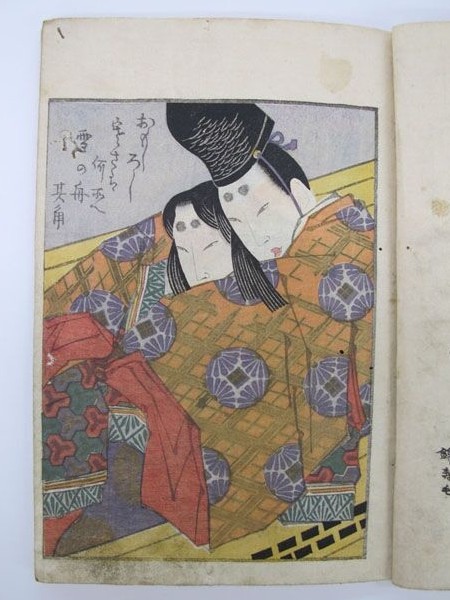 Fig.2. ‘Nobleman and lover on a boat‘ 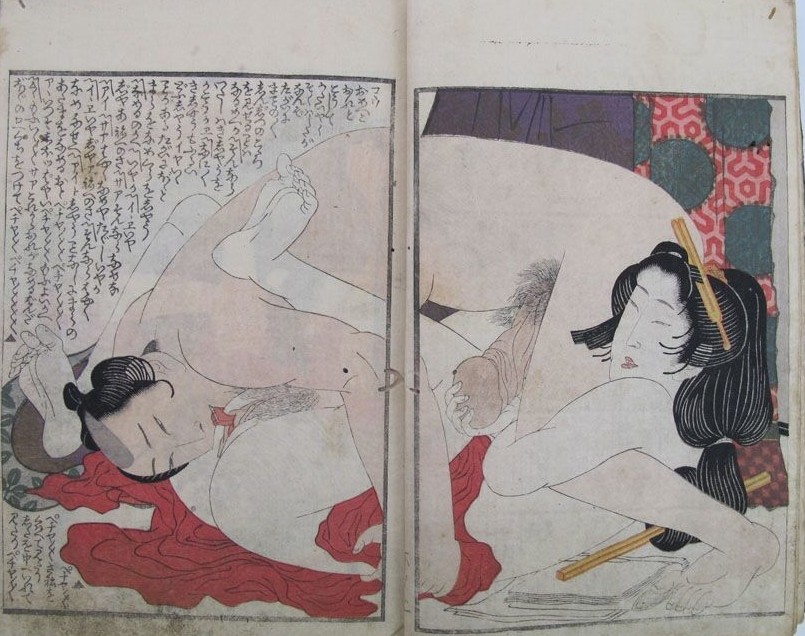 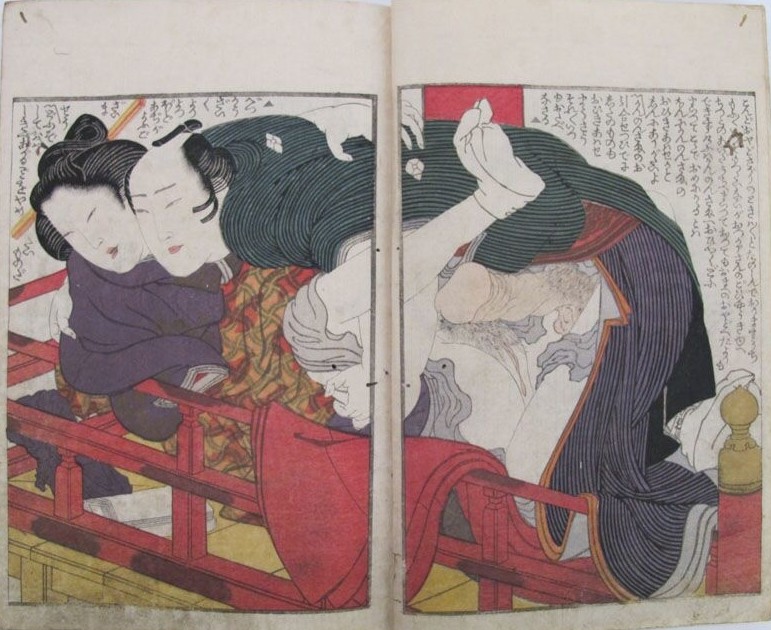 Fig.4. ‘Intimate couple on the balcony‘ 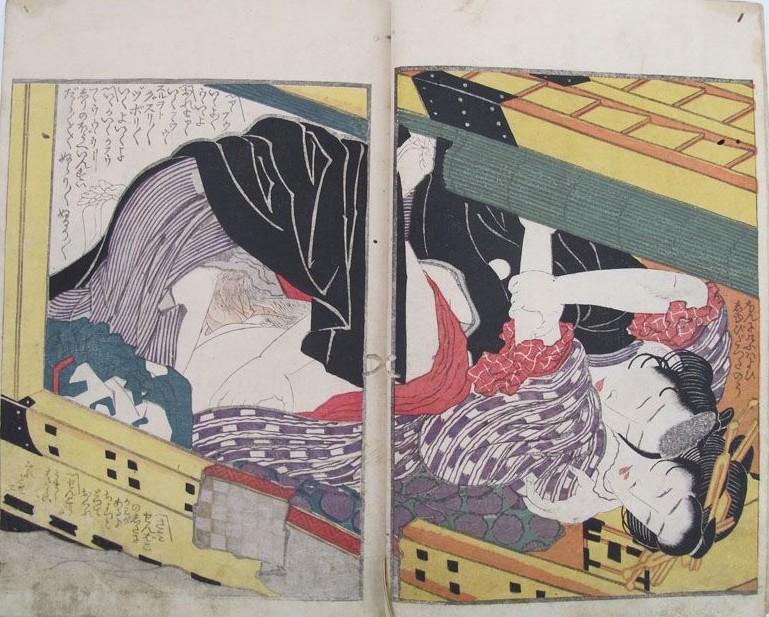 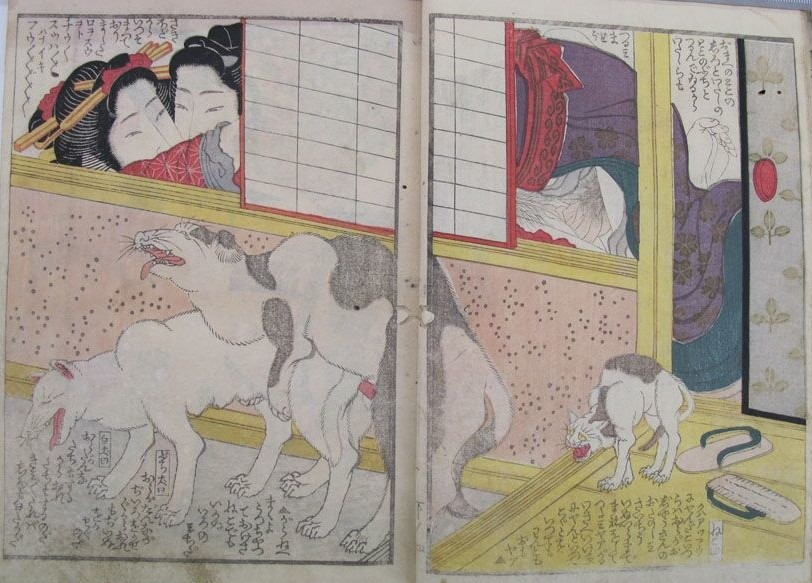 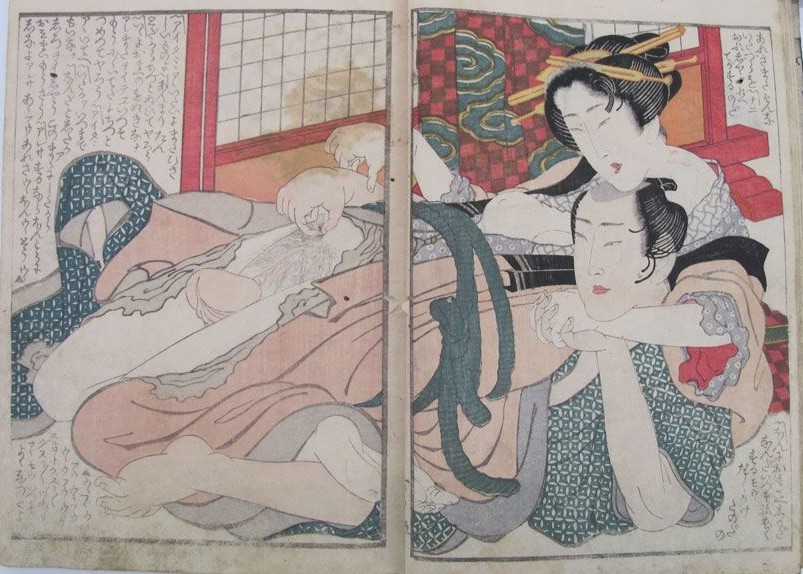 Fig.7. ‘An amusing scene with the female lying on top her lover with the man’s erect penis between her legs. He plucks at her pubic hair while she tenderly holds his pulse. This illustration shows Hokusai’s great empathy as an artist and human‘ 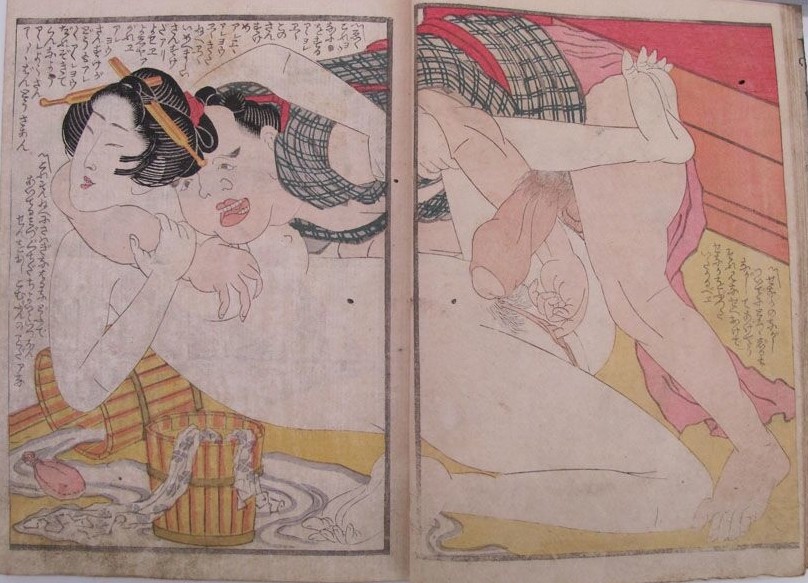 Fig.8. ‘A simple bathhouse attendant sexually assaulting a nude courtesan in a public bath. This well-known “bathhouse rape” scene with also used in Fukujuso (The Adonis Plant) issued c. 1818. So this is probably a new interpretation by Hokusai‘ 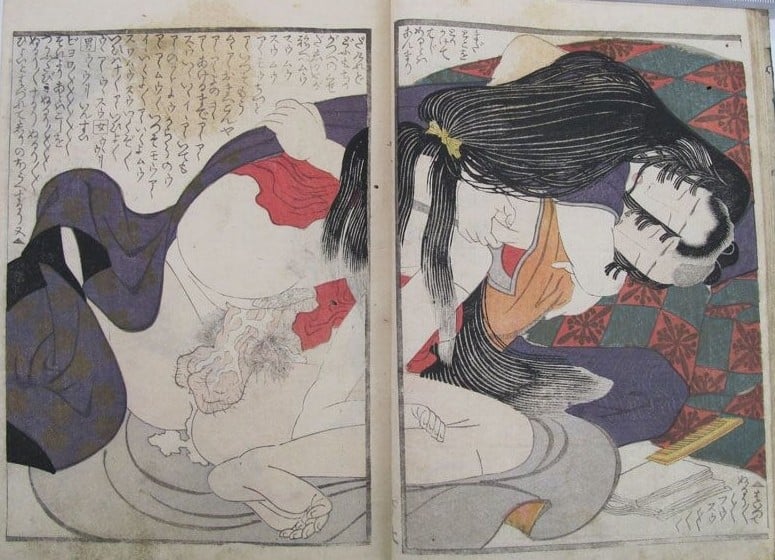 Fig.9. ‘Female sitting sideways on top of her lover. Her beautiful long hair covers her entire back‘ 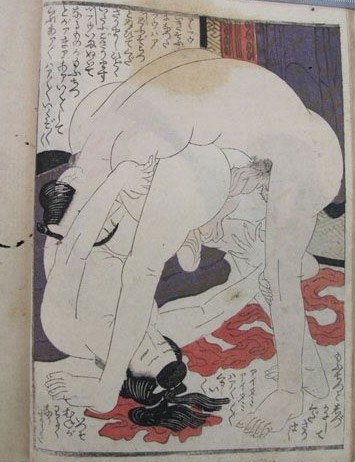 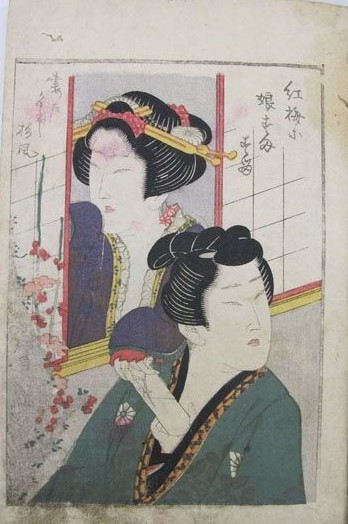 Fig.11. ‘Clandestine encounter at the window with the courtesan handing a secret letter to a young messenger‘‘ 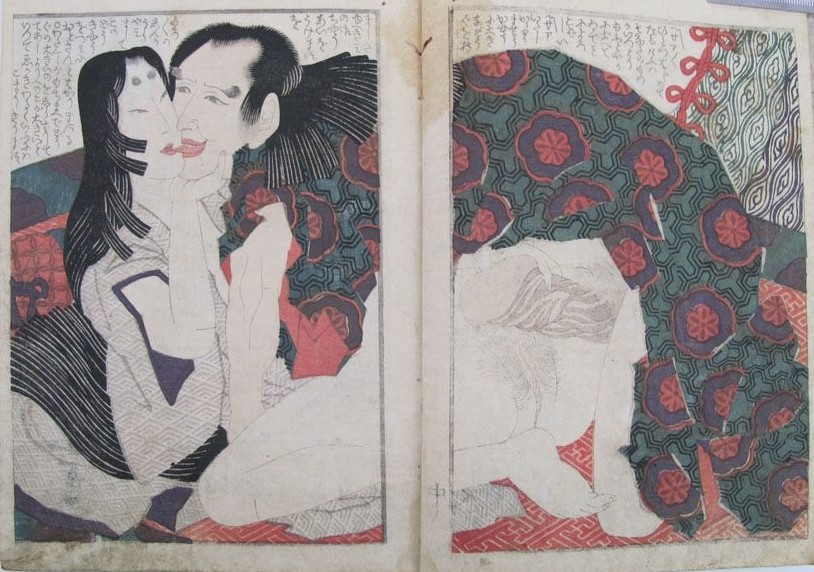 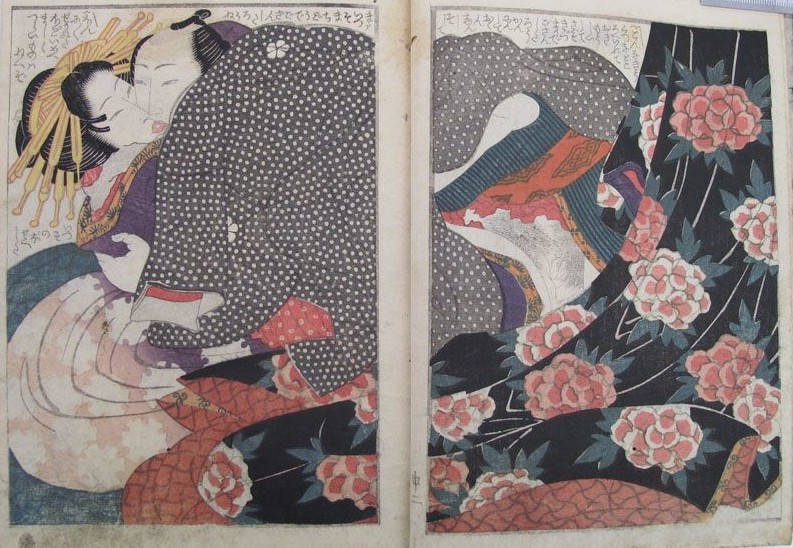 Fig.13. ‘An unusual composition with the sensuous couple positioned on the above left in the background and with the diagonal alignment of the black curtain running from the above right to the lower (middle) left. The woman is a high-class courtesan (oiran)‘ 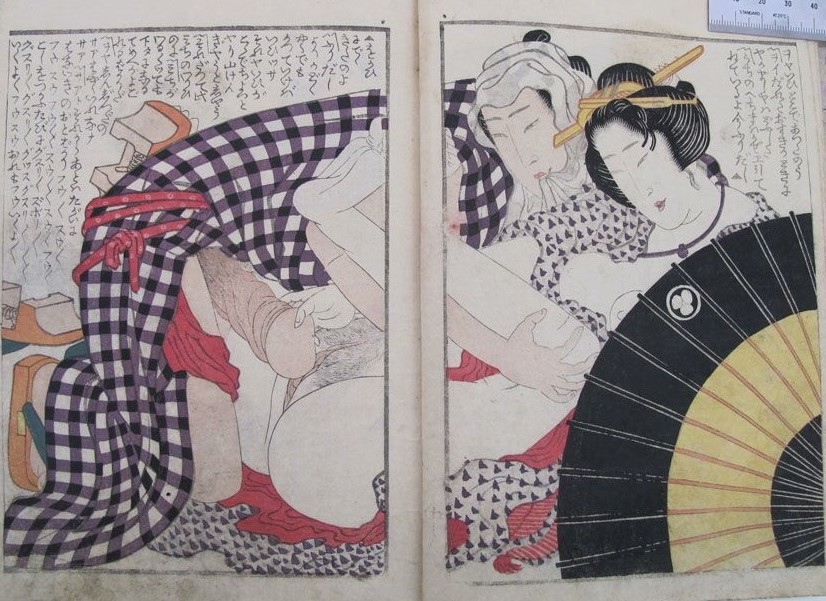 Fig.14. ‘A classical Hokusai composition with an intimate couple taking shelter behind an umbrella in the open-air. A striking detail is the male passionately biting in his cap (in most cases it is the female protagonist ho does this!). The female gently directs his penis to her private area‘ 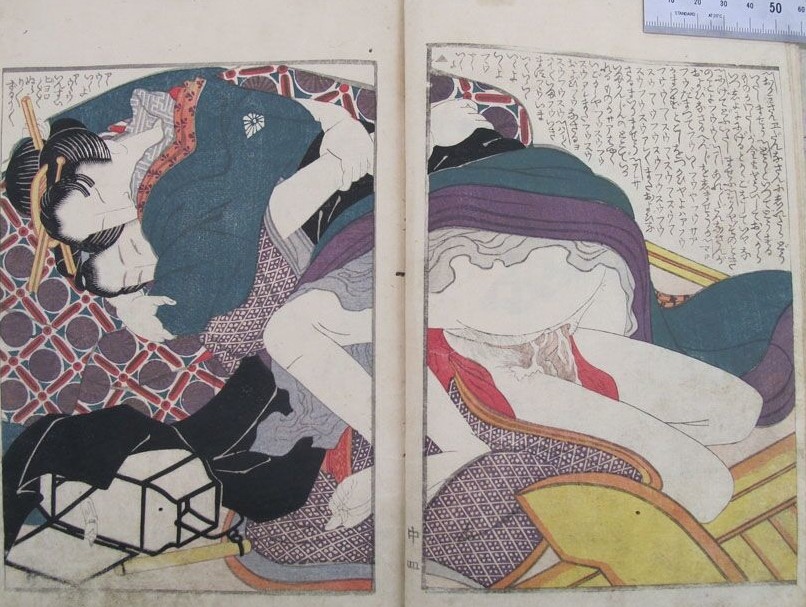 Fig.15. ‘A hasty passionate encounter with a young couple on a stairway. Their uncontrollable affection is emphasized by the fallen lantern next to them‘ 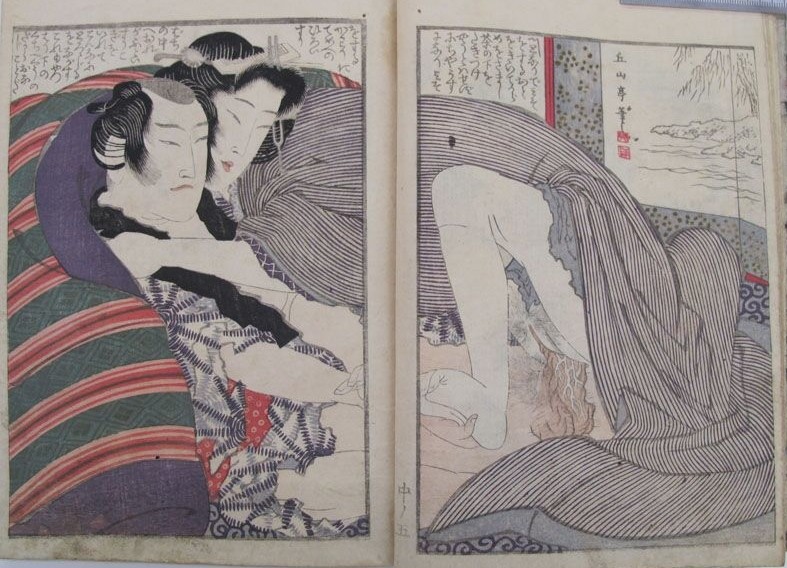 Fig.16. ‘A middle-aged couple set in a relaxed sensual pose. The male has striking sideburns‘ 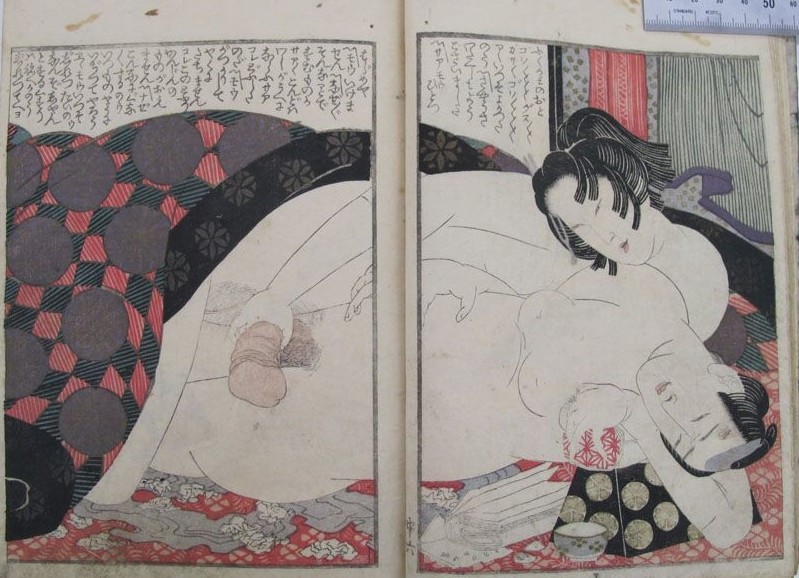 Fig.17. ‘A restless and voracious (the many tissues are a clear indication of this!) young female is holding the phallus of a drained middle-aged male who is leaning on a headrest‘ 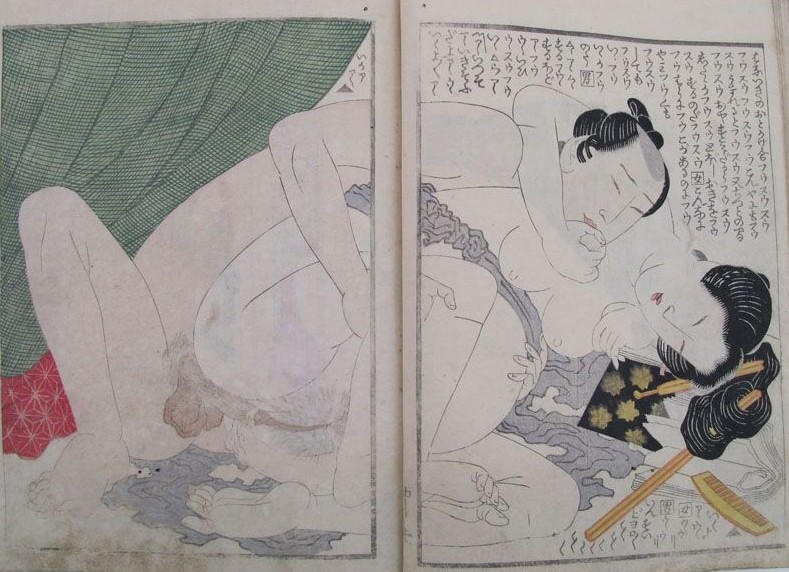 Fig.18. ‘During a hot summer day a pregnant female gets taken from behind by her spouse. She is wearing a sash around her belly to supports her swollen stomach‘ 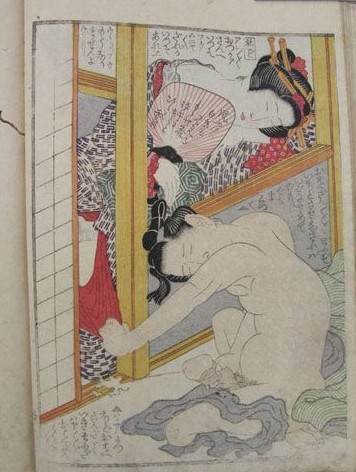 Fig.19. ‘An adorable scene with an ejaculating. The bare private parts of the sleeping geisha are clearly to overwhelming for his inexperienced mind ‘ 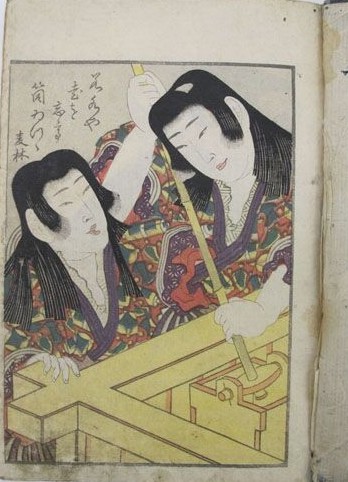 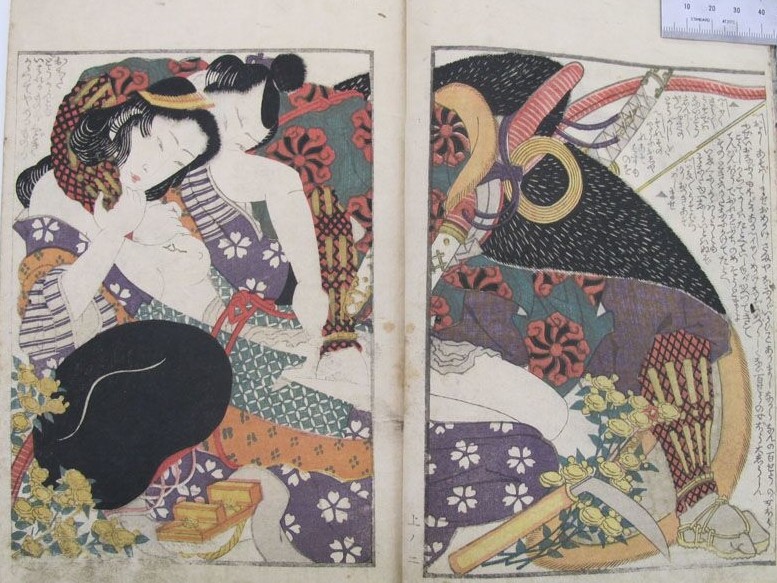 Fig.21. ‘Heavily armed archer brutally grabs his lover. The latter pulls the string of her kimono in order to offer him her lower body ‘ 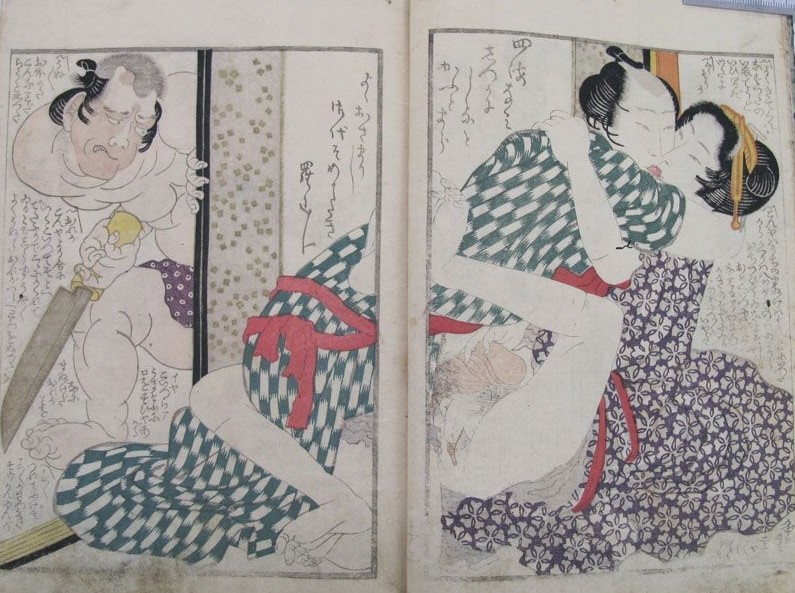 Fig.22. ‘An amusing (although suspenseful) image with a red-faced chubby male holding a sharp Santoku knife about to confront the intimate couple in the other room‘ 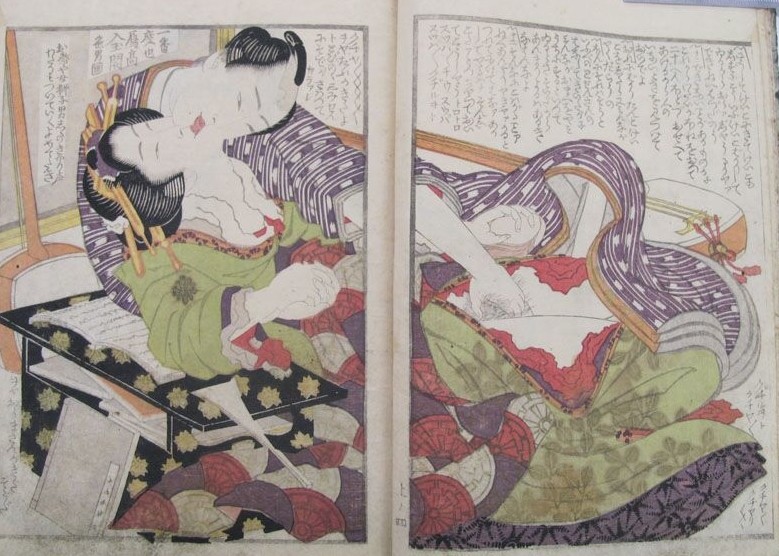 Fig.23. ‘A courtesan in training is seduced by her teacher during her music lesson. She leans on the desk while they stroke each other’s genitals. Her music notes books, plectrum (bachi), and the shamisen (three-stringed traditional Japanese musical instrument) lie around them‘ 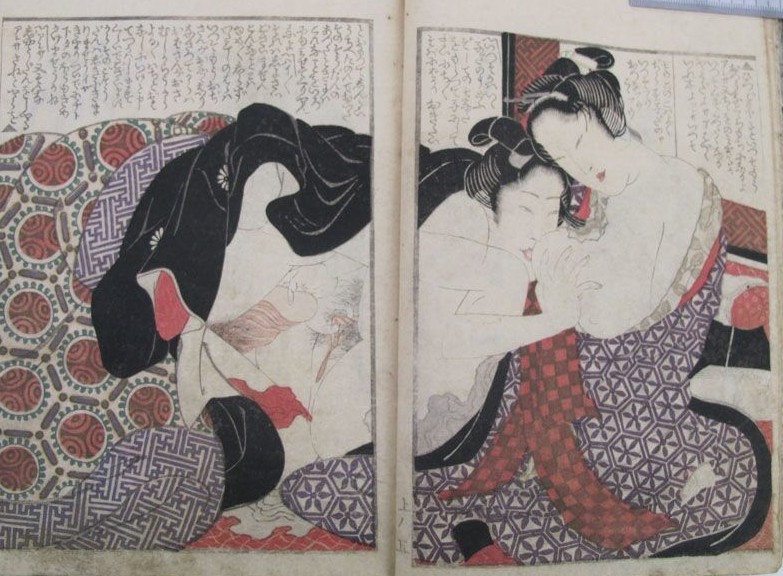 Fig.24. ‘An inept adolescent boy suckling the nipple of a receptive mature female. Nipple sucking is a recurring theme in Hokusai’s sensual idiom‘ 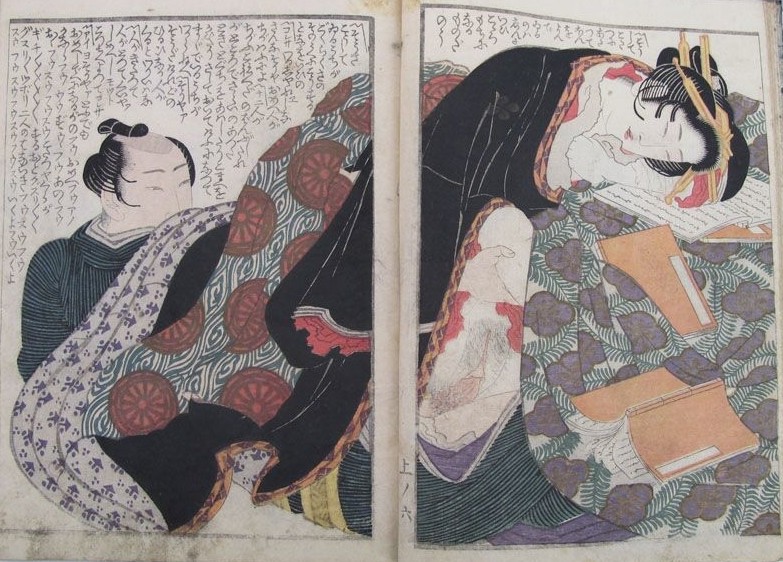 Fig.25. ‘A subtle tableau in which sensuality does not immediately catch the eye. The courtesan – sitting underneath a kotatsu brazier – was reading some ehon (books) before she was interrupted by her aroused lover‘ 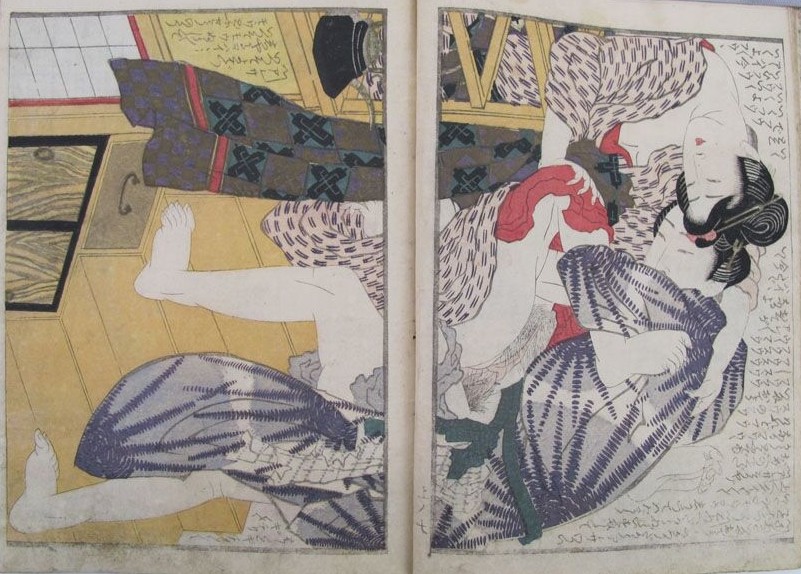 Fig.26. ‘A deviating vertical design depicting a passionate quickie on a staircase. The curved neck of the female is another of Hokusai’s characteristic details‘ 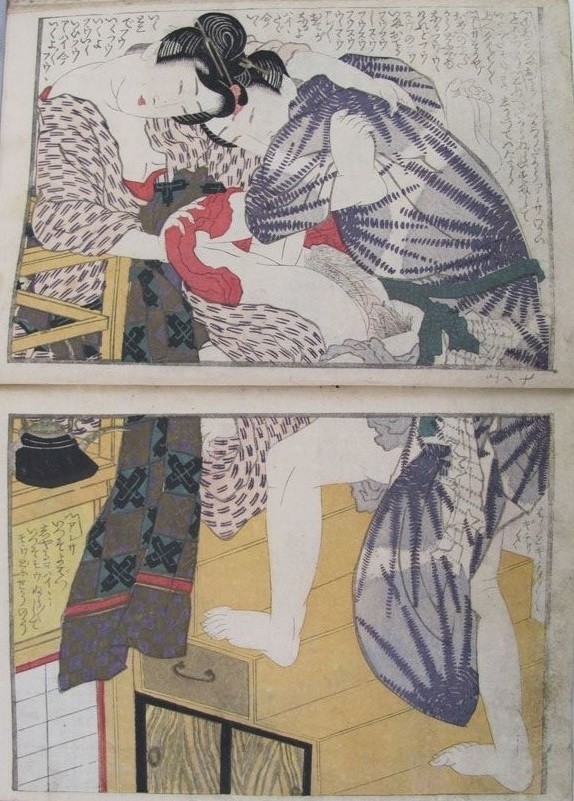 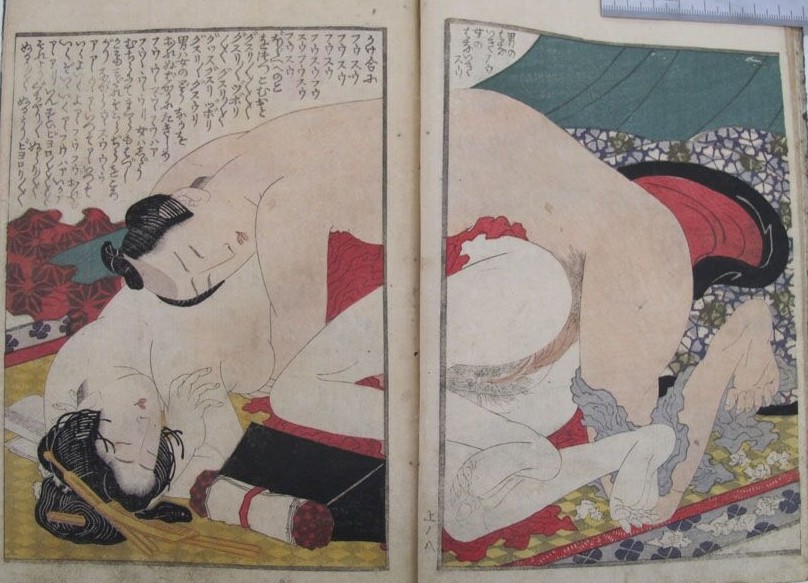 Fig.28. ‘An impeccable composition that Hokusai used earlier in his iconic ‘Fukujuso’-series.  We see a nude couple coupling in “dog fashion”. They are delighted to find themselves alone, as the master has gone out for the evening, leaving his wife free to dally at leisure with her secret lover ‘ 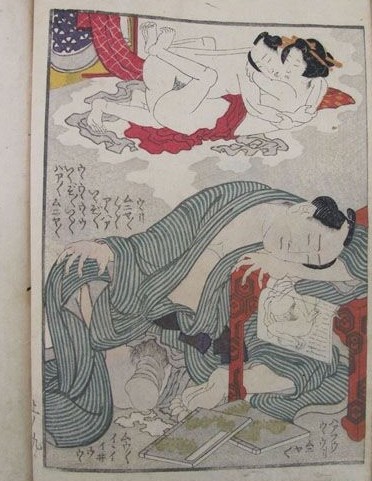 *Surimono were privately commissioned prints, and often elaborately printed including embossing techniques…etc. They were issued at special occasions such as the New Year.

**Yashima Gakutei was a famous poet and ukiyo-e print designer. He studied under Totoya Hokkei (1780-1850) and was much influenced by Hokusai. Gakutei often employed the nom de plume Gogaku and left a number of skilled surimono and book illustrations, among which his impressionistic landscape scene are magnificent. Though a native of Edo, Gakutei lived in Osaka during the early 1830s.

What do you think about these kind of articles? Leave your reaction in the comment box below…!!

Thank you for the set! The vertical design is very unusual.

Thanks Darya. Yes, it gives a completely different dynamic..!

It is mid-morning in Yokohama Almost faded pale moon like a lantern At the end of a Prussian blue roof 'The" rel="nofollow" target="_blank">https://shungagallery.com/hokusais-the-great-wave/">The Great Wave off Kanagawa' by Hokusai Not yet painted but she feels the surge of the sea And like the fishermen in their longboats Fears the wave above and in her Where will she land after it passes? She closes her eyes, hangs on to his neck Pleasure guides her open boat, her compass Lips move towards the perfect symmetry of Mount Fuji

Thanks a lot Carmelo, beautiful ode to the Japanese icons!