The Malicious Monk and His Bewitching Phallus

Until recently this series was attributed to Katsushika Hokusai‘s daughter Ōi (c.1800-1866) but on closer inspection it’s almost certain that it was drawn by the master himself. The Japanese title for the series is ‘Kurawa no tanoshimi‘ and it was published in the early 1820s.

The male figure depicted in this shunga design is the power-hungry Buddhist monk Dōkyō (700-772). He is making love to the empress Kōken (713-770) who he, as the rumour went, bewitched with his giant penis.

Nowadays Kōken is primarily remembered for her affair with Dōkyō, who cured her illness in 761. She first reigned between 749-758, and later reascended as the Empress Shōtoku in 765 until her death in 770.

In 766 she promoted Dōkyō to Hōō (priestly emperor), a position right below her. The ambitious Dōkyō tried to seize power in 770, but the death of the empress and the resistance of the aristocracy made him fail. He was exiled and died two years later.

The translation (by Airi Nakano) of the Japanese text in the above design reads:

Monk: “I have prepared a big tool for you, your Majesty. My vassals are jealous of me because of this tool, and they are planning to falsely accuse me. They’re speaking ill of me behind my back that my penis is thicker than my feet. An artist also makes fun of me.”

Tom Evans on Hokusai in ‘Shunga, the Art of Love in Japan’ : “…Hokusai‘s shunga were often based on the pattern of the masterpieces of the late eighteenth century. Many of the scenes portrayed, and the grouping and massing of the figures within them, have their equivalents in the works of several earlier artists – Shuncho, in particular, comes to mind in this context…[…] The designs gain their effect chiefly through the power of their coloration, piled up mass upon mass in a bewildering variety of intricate patterns.”

When you click on the images you can find more designs of this series!

Click here if you want to read the complete translation of Hokusai´s ‘The Dream of the Fisherman´s Wife‘ !

Kunisada also created designs on this striking character. You can find it HERE !

The above piece is available in our gallery. You can find it HERE ! 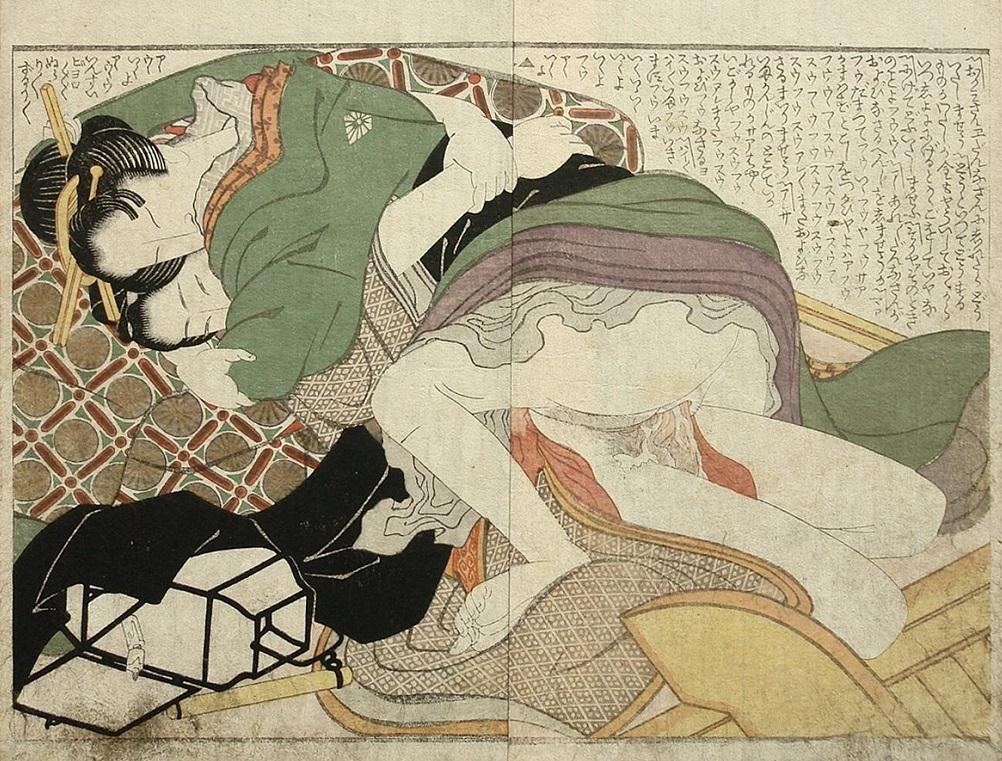 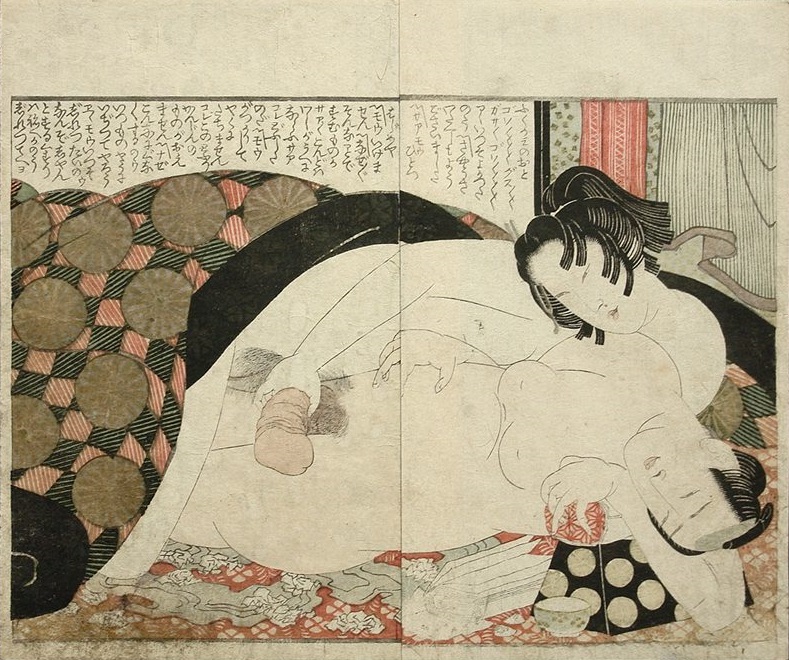 "...and his bewitching clothing". I love how the clothing frames their private parts. Looks like a collage. Amazing piece!

Thanks Darya, and you are absolutely right. The upper part of the composition is dominated by Dokyo's kimono and is beautifully contrasted by the white flesh of the female in the lower part. The love between the protagonists is also nicely accentuated by the "heart-shaped" unity of the heads. Unbelievable that this print is https://www.shungagalleryshop.com/artist/hokusai-katsushika/festival-mask" rel="nofollow">still for sale !