The prolific ukiyo-e artist Utagawa Kunisada (1786-1865) was specialized in portraying rape scenes. He even adopted a special pen name Bukiyo Matahei followed by a subtitle “ichimei Goin Sensei” which was probably to indicate to the reader that they could expect portrayals of rape.

‘Gang rape with the monstrous Dokyo’ (c.1826) from the series ‘Kaidan Yoru no Tono (Picture Book: Tales of Pussy in the Palace at Night)‘ by Utagawa Kunisada

“Long ago, there was a man of legend in Japan. He had a special giant dynamite “meat popsicle”! It was longer than a horse dick, thicker than your arm, and prouds itself more than a King. His name is Dokyo. He was a priest and a soldier. Dokyo loved virgin, virgin’s cameltoe, virgin’s juice and weeping virgins.”

‘Close-up of the giant Dokyo‘

This main character of the scene is based on a real person. Dokyo (700-772) was a Japanese Buddhist priest who tried to conquer the Japanese imperial throne during the 8th century. In 761 he gained the trust of the old empress Koken (who had governed the empire from 749 to 758) because of his expert knowledge of medicine. According to legend he became her lover. 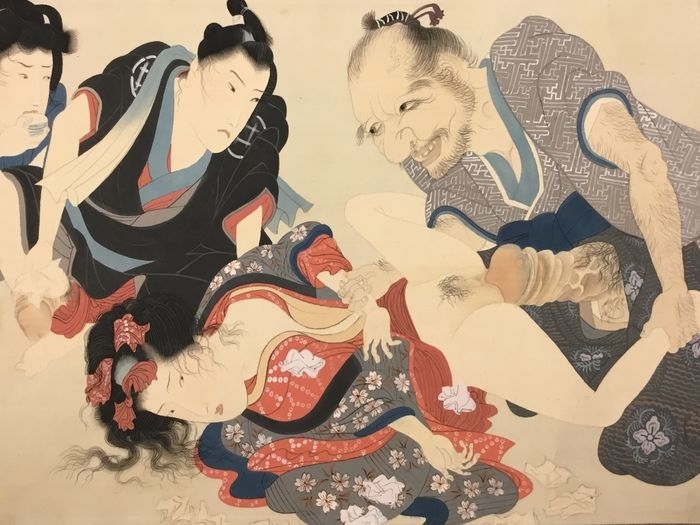 With her help Dokyo started to exercise a powerful control within the government. In 764 he successfully eliminated his primary political rival Oshikatsu, who was close with the emperor Junnin. In the subsequent revolution, the emperor was dethroned, and the former empress reascended the throne. She ruled under the name empress Shotoku between 764 and 770. 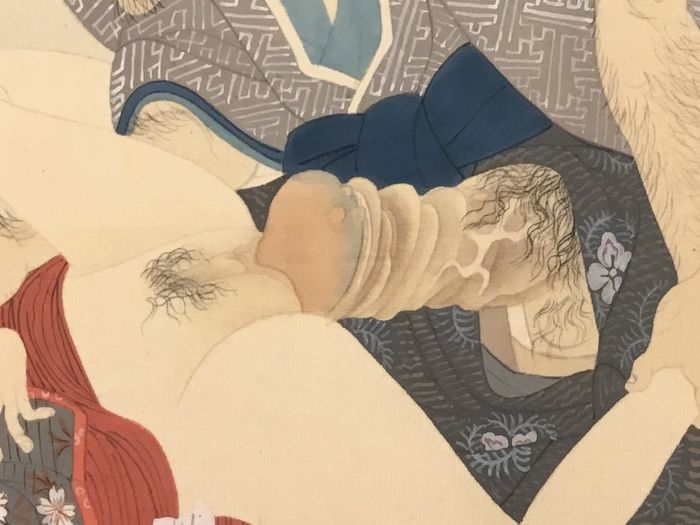 Within a year Dokyo got the title of prime minister, and in 766 he also was made high priest of state. He was not satisfied with nearly governing the country, and wanted complete control. Therefore he convinced an oracle to foresee his succession to the throne. This snobishness maddened a lot of influential representatives of the government, especially those of the powerful Fujiwara family.

When the empress died in 770, the Fujiwara had Dōkyō eradicated from the capital. As a result of this event, no woman was admitted to succeed to the Japanese throne for almost a thousand years.

This great Kunisada piece is available in our gallery. The condition report is as follows:

You can find the price through the following link: Dokyo by Kunisada