Seasonal Eros in the Calendar of 1929 by Aragon, Peret, and Man Ray

In today’s article, we’ll examine an extremely rare surrealistic brochure 1929. It was made by two famous French poets and one photographer with the founder of surrealistic movement André Breton as an editor (remained unmentioned).  The book of 28 pages was printed in the form of a calendar. 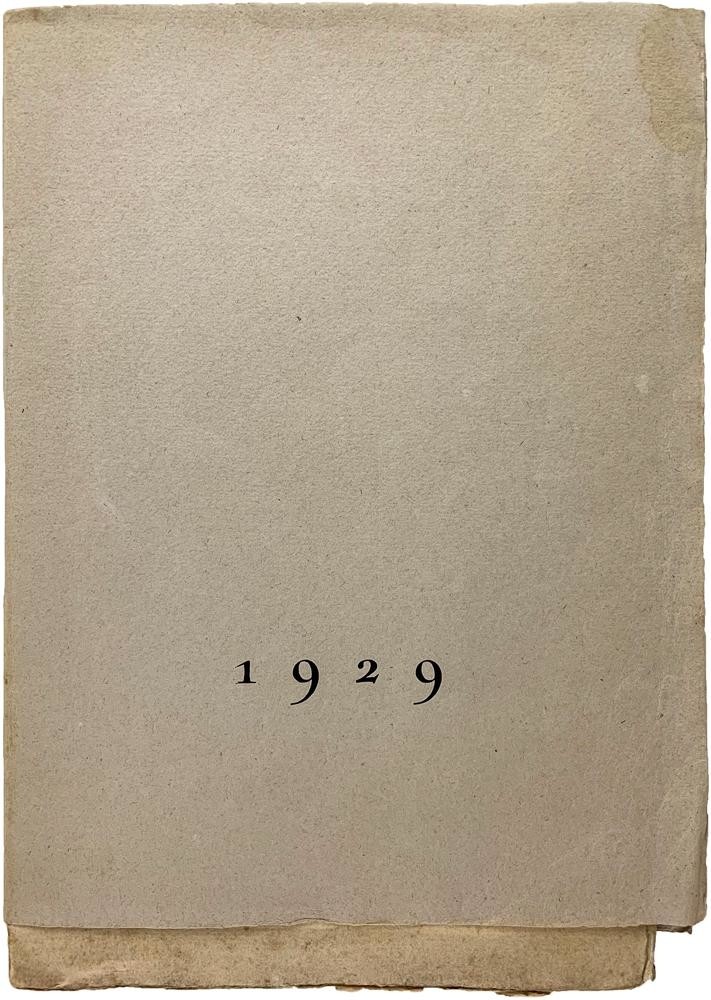 Fig. 1. The cover of the first edition (photo is taken from abebooks.com)

1929 was originally clandestinely published in Brussels in 1929 (with no indication of the publisher, date, or place of publication) in an edition of 215 and intended for private circulation. Most of the copies were seized by customs on the French border, making the original impossibly rare (photoeye.com). The book was reprinted in 1993 in Paris by Cosa Nostra Experimentale (129 exemplars). The cover was designed by M. Suzuki. 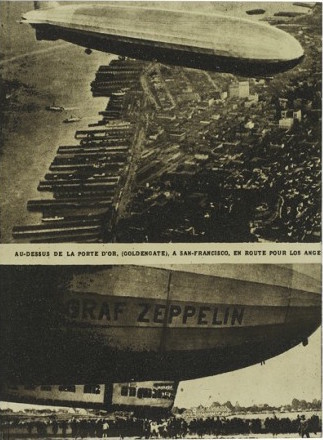 Fig. 2. The cover of the latest edition (photo is taken from royalbooklodge.com)

The illustrations are four close-up photographs of sexual acts: The Spring, The Summer, The Autumn, The Winter. The participants are probably Man Ray himself and his occasional lover Kiki de Montparnasse (Alice Prin), who was a French artist’s model, literary muse, nightclub singer, actress, and painter. 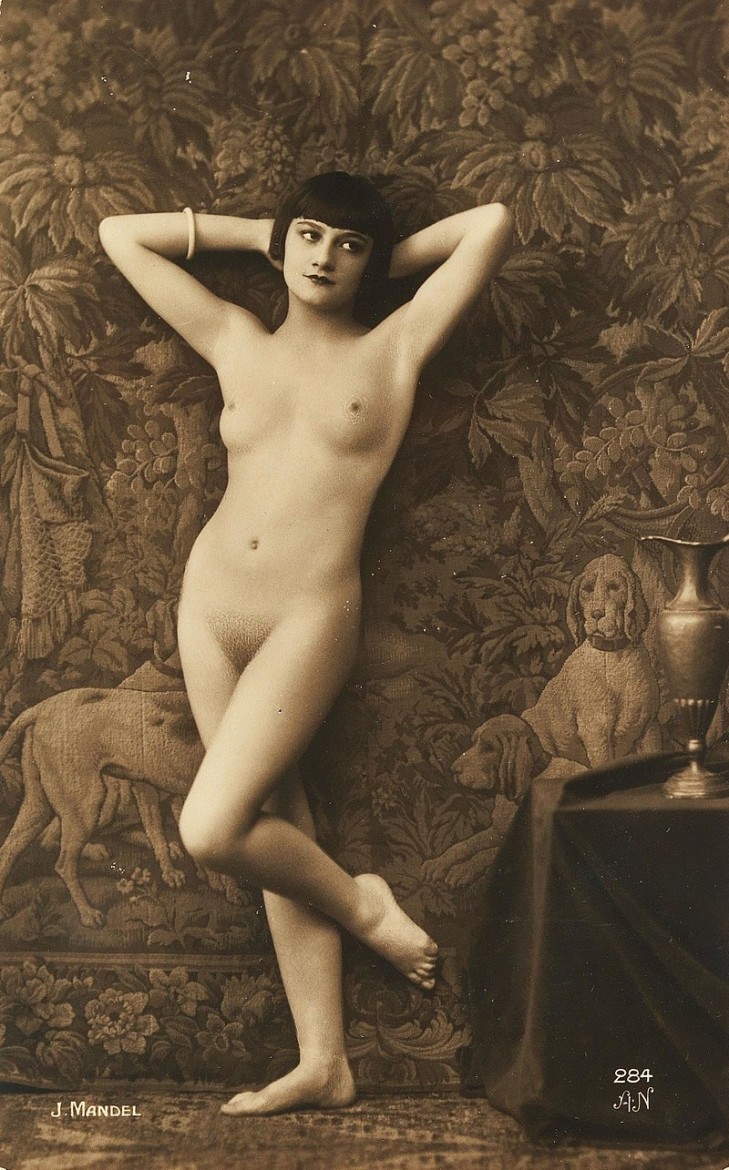 Let’s take a look at each season accompanied by the sacrilegious poems of Benjamin Peret. 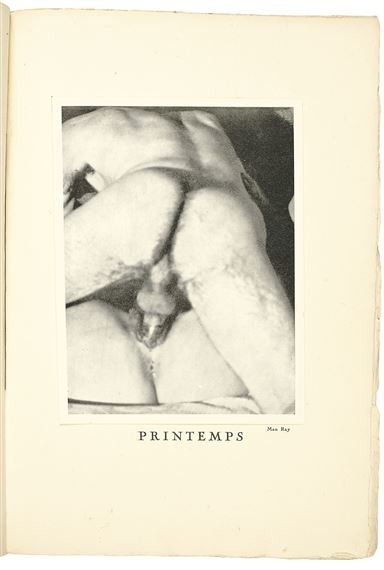 This photograph is a close-up image of a sexual encounter viewed from behind. One can notice that the spring is associated with the deepest penetration in comparison with the summer or the winter.

By the way, this view often can be seen in shunga pictures.

Here is a rough translation of one of the ‘spring’ poems by Peret: 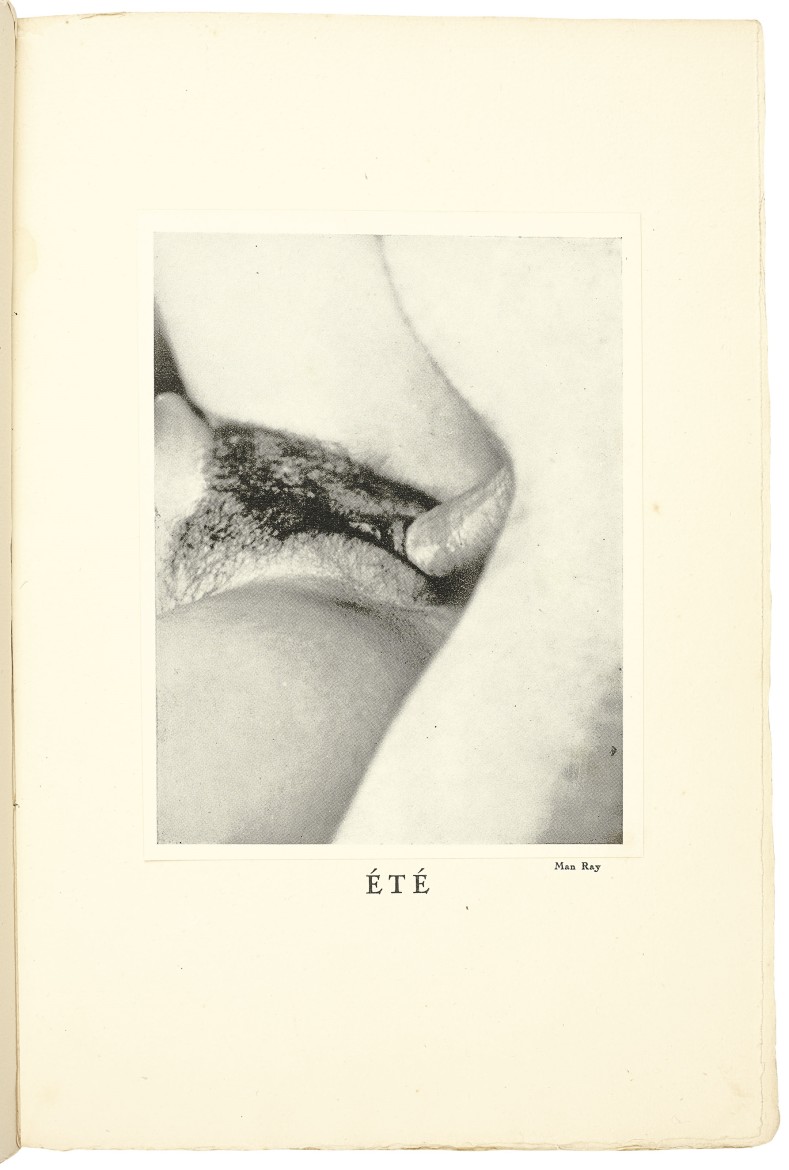 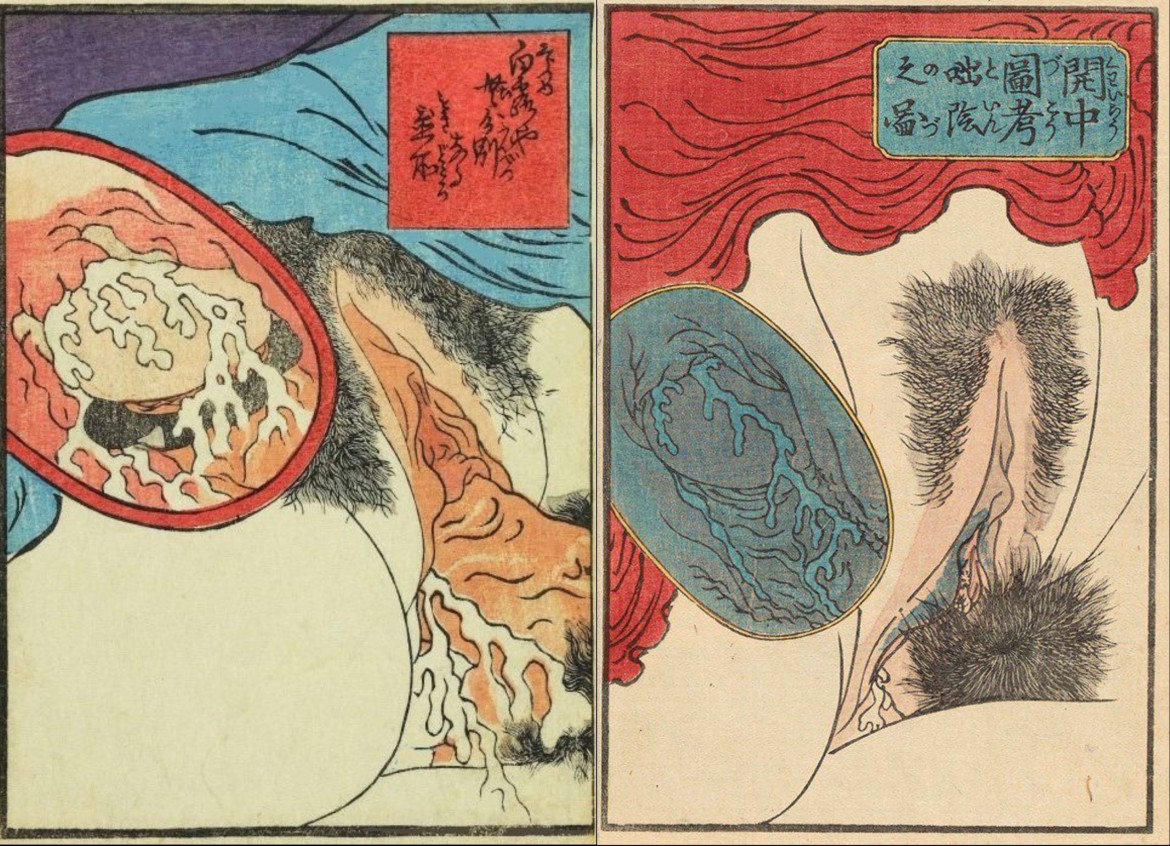 In addition to this picture we introduce to you another one translation of the poem by Peret:

Fig. 9. Page from the book with the original text. 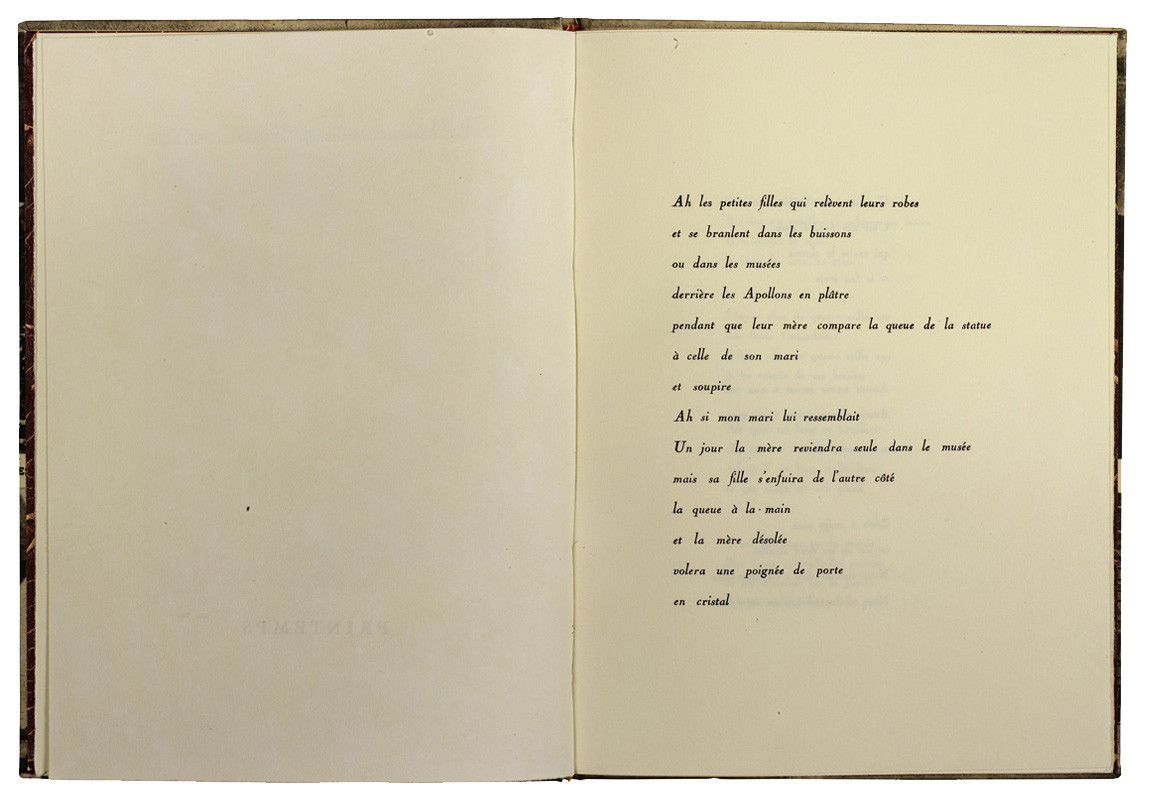 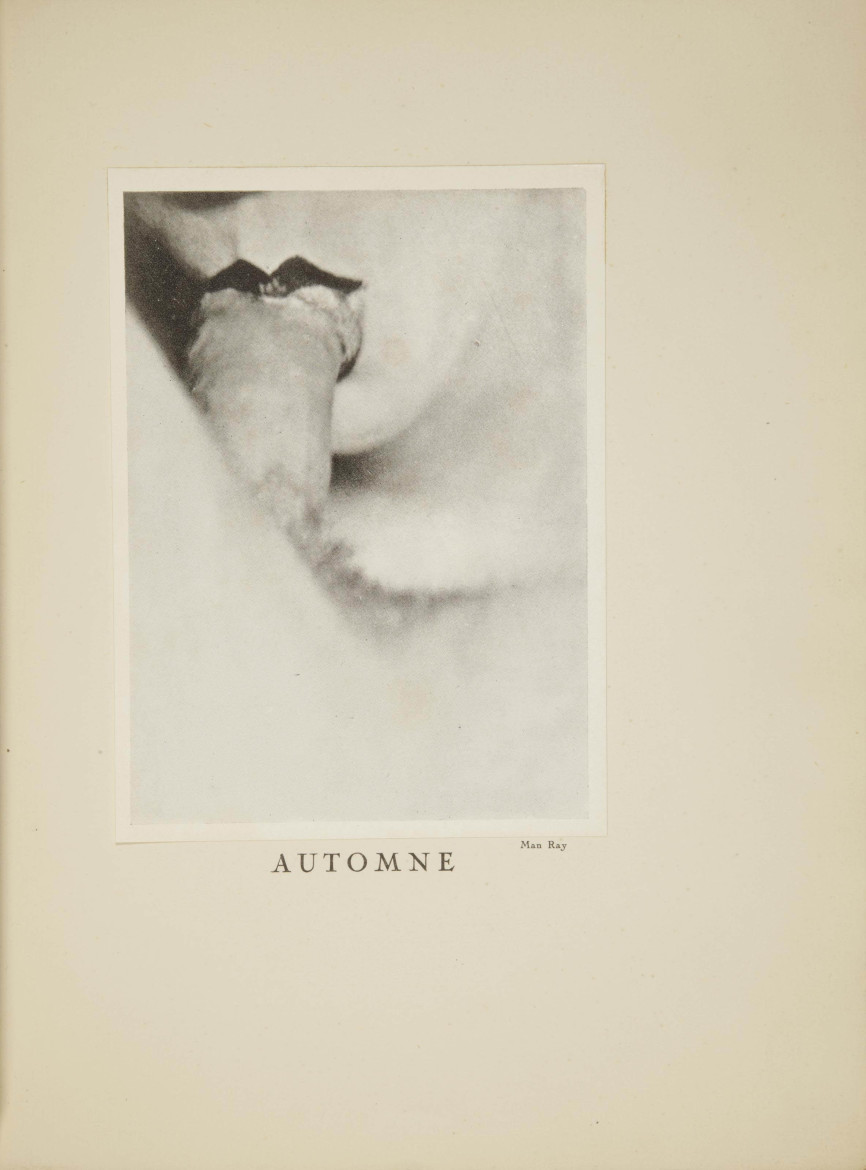 In contrast with previous photos, this type of image rarely can be noticed in shunga because of the specific Japanese approach to the depiction of people and their genitalia (you can read about it here. In Man Ray’s case, photography allows him to make an impressive portrait of French love. It’s this image in that the woman is clearly identifiable: it is Kiki from Montparnasse <…>. Her lips, with make-up to form the shape of Cupid’s bow, tightly grip a penis that, judging by the angle of the shot, is probably that of the photographer. <…> Many books by surrealist artists are the product of a pornographic imagination, but never in such a scandalous and crude manner as in this publication. (Parr and Badger, he Photobook: A History Volume II, p. 138)

Here it is, the sweet cunt
The real bread of the balls
whose hairs tickle us
even in the mouth 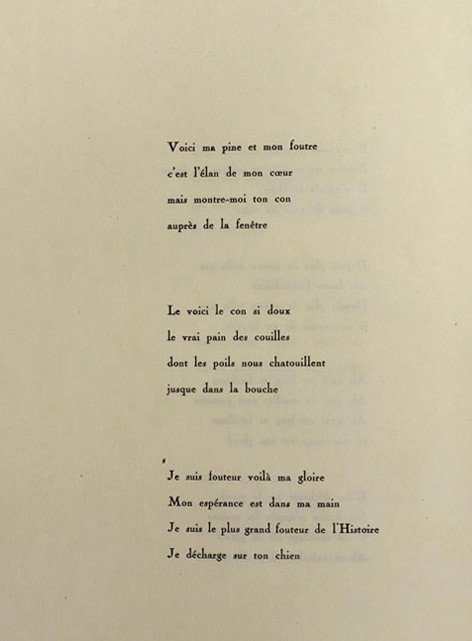 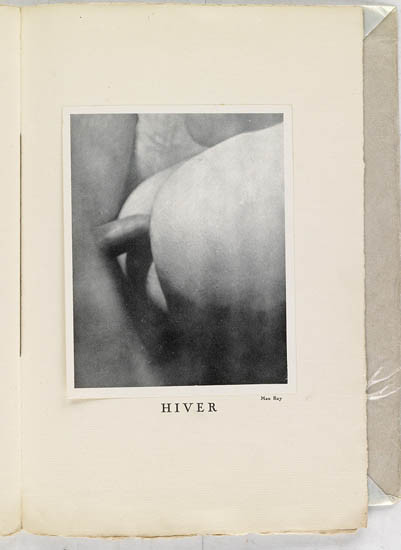 In this photograph we can see probably a standing man and a woman who is lying on her back with legs up high. Similar poses were frequently depicted by shunga artists.

In one of his poems Peret uses a traditional French Christmas carol Il est né, le divin Enfant (He is born, the divine Child) as an object for parody:

Fig. 14. Page from the book with text by Peret. 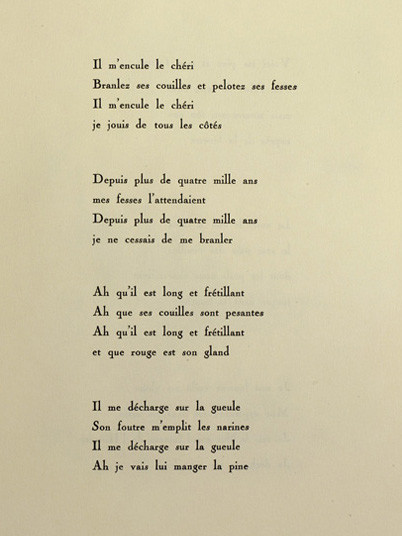 Click HERE to check out an article on Auguste Rodin’s fascination for shunga…!!

What season of 1929 do you like the most? Let us know in the comments below.

Another expressive,thought provoking addition to the art history of Shunga and its impart on modern art. To observe the insights of your team of scholars enriches my appreciation and knowledge of the connective world of art. I have numerous books on Man ray and not one referred to the aforementioned calendar. Kudos.

It could happen because of censorship, I suppose. These photos by Man Ray are regarded as pornographic and too explicit. Maybe, editors think, this tetraptych is not something new and extraordinary, what one should study as an example of Man Ray's talent. At least, I should say that this book is a rarity, so it could be overlooked by specialists.

Art vs Censorship,the eternal battle that shouldn't exist. Man Ray powered photographic surrealism and thanks again for unveiling this "coital" chapter of his art.

Thank you for your comments, Roy! We'll publish some more insights on surrealists' works in the near future.