A Sadistic Ninja Raping and Torturing a Terrified Couple

Considered by many connoisseurs to be one of the greatest designs in shunga perhaps only trumped by Hokusai‘s The Dream of the Fisherman’s Wife (c.1814) and Utamaro‘s tenth sheet of Poem of the Pillow (c.1788).

This unfolding image over four pages portrays a spellbinding rape scene with a villainous ninja terrifying a strapped-down couple. He is pointing his samurai sword to the scrotum of the helpless man while at the meantime is raping his tied-down wife.

A compelling detail is the maintained erection of the male victim. Were they quickly overpowered during their love-making and therefore still has an erected penis? Or is he aroused by this moment of extreme tension?

Reference:  p.348/349 in Poem of the Pillow and other Stories by Utamaro, Hokusai…etc. by Gian Carlo Calza.

Comments on this design:

“…It contains the famous scene, unfolding over four pages, of a rape committed by a bandit while he keeps his victim’s husband at bay with a sword; the husband is tied up and screaming, but is no less sexually aroused than the bandit himself.” (Gian Carlo Calza in Poem of the Pillow and Other Stories by Utamaro, Hokusai…etc.).

‘The scene of the robber raping a woman whose husband he has tied up and whom he taunts with the point of his sword, is one of the most horrifying of any shunga of the period … But the malevolent, black-clad figure of the robber is truly monumental and one of the most memorable images of the shunga even of this period.” (Jack Hillier The Art of the Japanese Book (London, 1987)

The translation of the added text in the panels is very difficult. The text itself is Edo spoken style archaic slang and very complicated to understand. Most likely part of a longer story. To get an impression you can find a loose translation* below:

First part of the first panel: (text too blurred)

Second part of the first panel:

Ninja: “Oh that person who is out of hand, good, well done. I’m going to throw this person into trouble. In this way. I will let it go down, you will come again..”

Tied Woman: “Indeed, it does not matter how much you do not want to lose, but if you lose it, born yesterday is about omen. Even if the dusk enters like this, there is a lot of thought to be on that day, well, well, if it does not matter.”

Here is a rare B&W edition*… 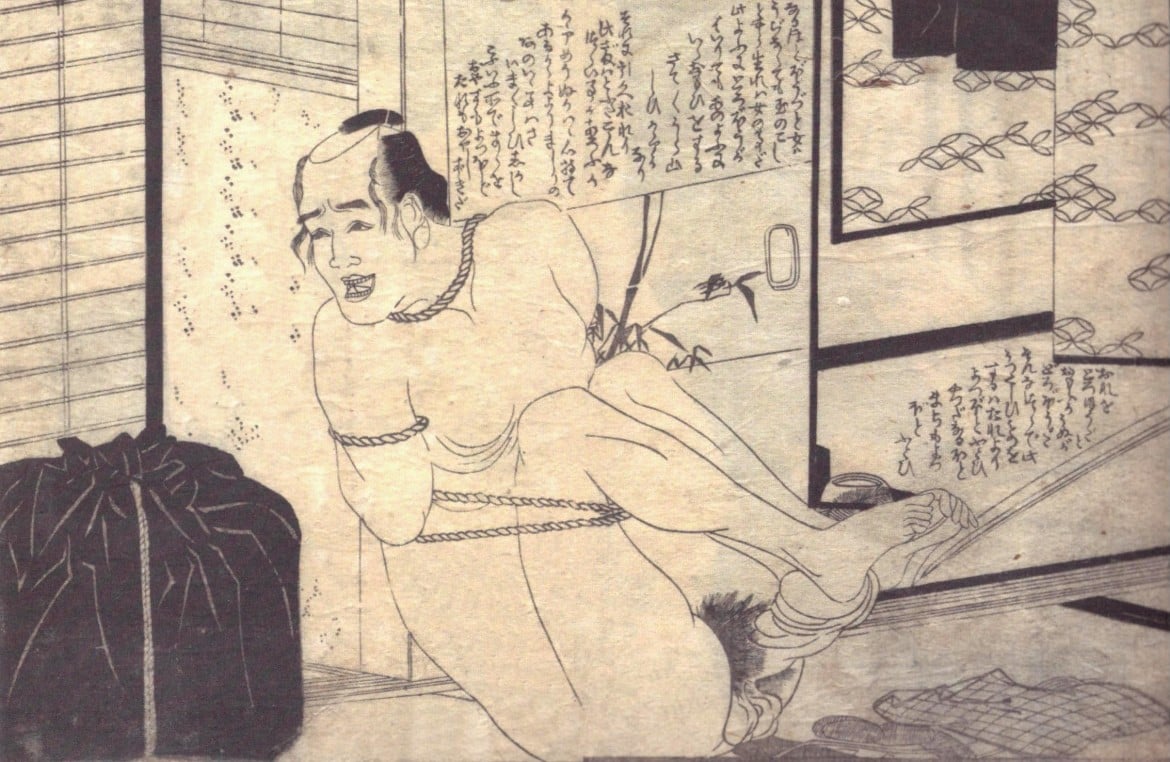 Click HERE and check out our UNIQUE project on releasing a NEW remake of Hokusai’s “Home Invasion (Ninja)” masterpiece..!!

Click HERE to find more pieces from the masterful Conjugal Eddies-series including their prices!

Do you know more shocking shunga designs? You can leave your reaction in the comment box below….!! 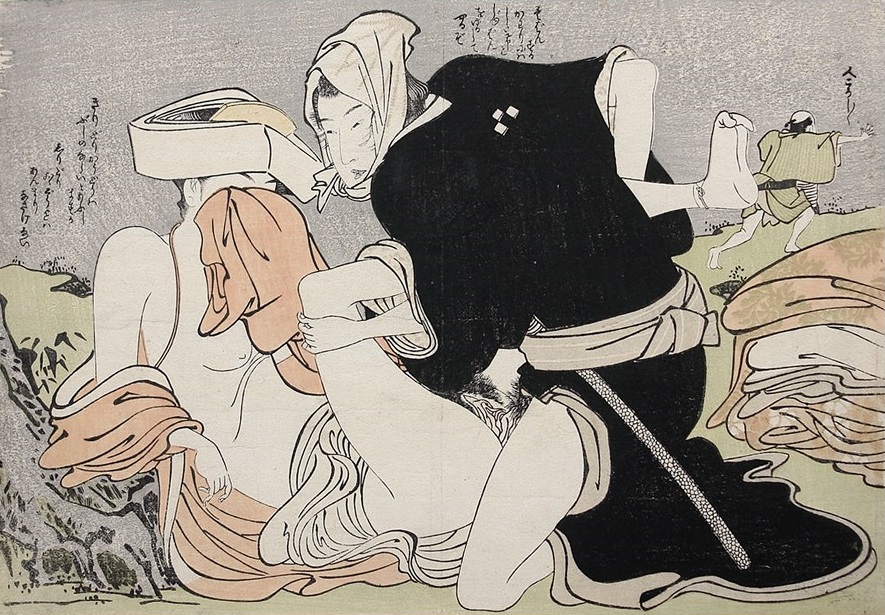 Fantastic, Marijn! Thank you very much! It's a great article on one of the most dramatic shunga ever produced.

Thanks for your kind comments Fred, and yes you're right...its suspense is unmatched.

Well, in spite of the fact that facial features are more like ones of Hokusai's characters, I caught myself thinking that this depiction of men with their mouths open this way is more typical for Utamaro (e. g. his gay piece with Hisamatsu and the father of Osome and his piece with a man and a woman who are witnessed by another man with his mouth open (both pictures are from 'Koi no futozao')). Btw I have an image of the b&w version in perfect quality (almost like your amazing remake).

Thanks Darya. Yes, that's because there has been a lot of debate regarding the attribution to either Utamaro or Hokusai. Yes, please do send a picture of the B&W version!