"Ladies who would be alluring to men should surround themselves with cats... I never look at men only at women – they have, each one such marvelous possibilities of beauty. But unfortunately, most of them have not developed these possibilities because they have not learned the lessons cats can teach..." (dailyartmagazine.com). In this article, we'll examine the art of this statement's author, the devotee of cats and women, Japanese dandy Tsuguharu Foujita (1886-1968). 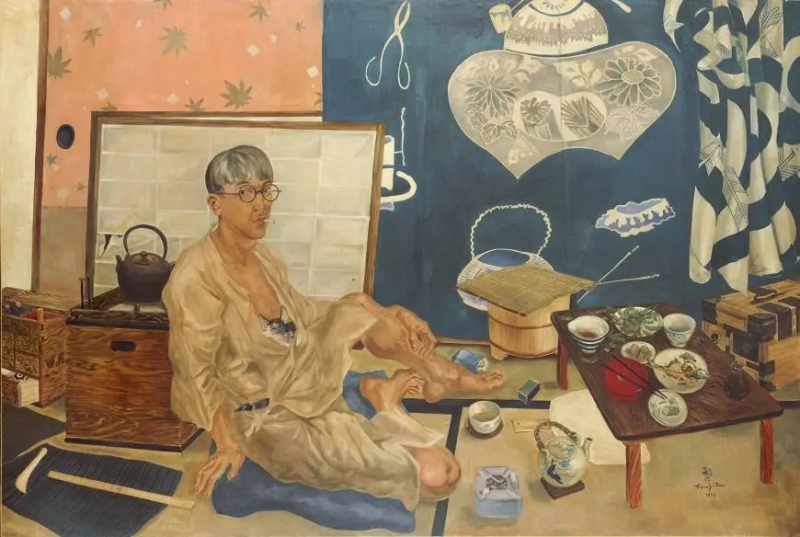 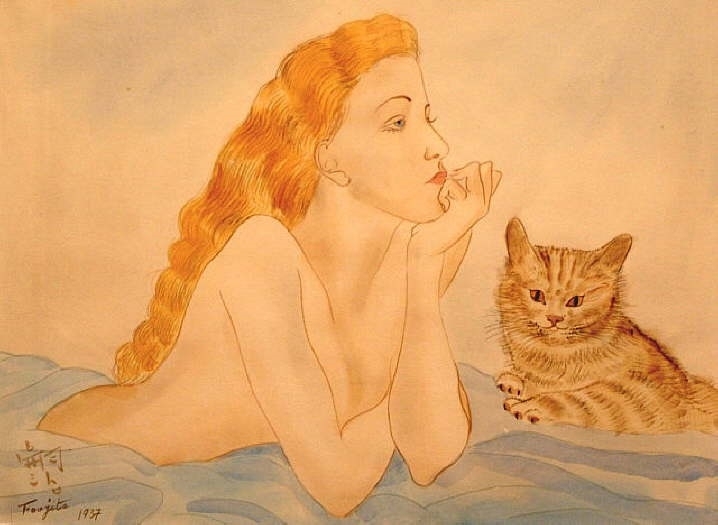 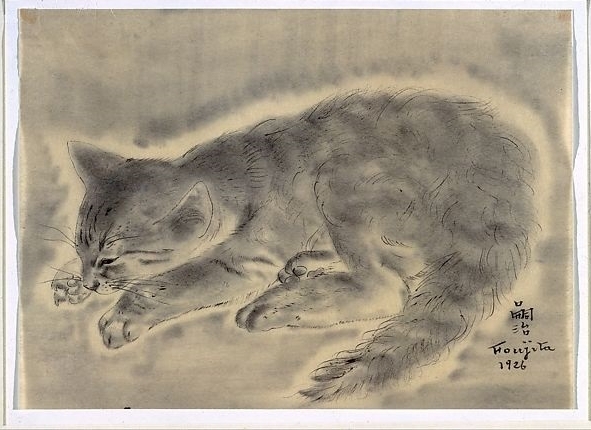 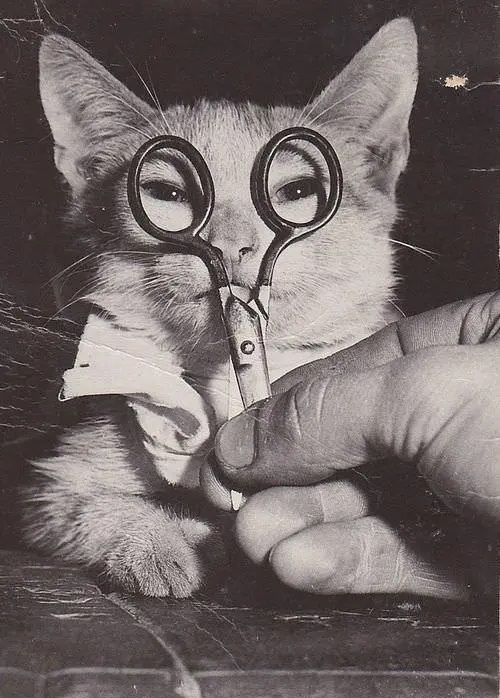 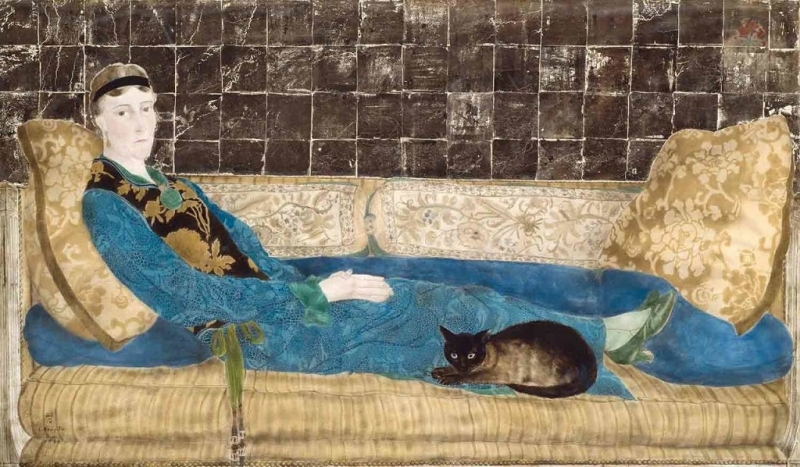 The Inheritor Of The World

The artist originated from the noble Fujita family ("Foujita" is a later frenchised version), whose name, according to Wikipedia, means "glicine field." Artist's first name Tsuguharu is translated as "the inheritor of the world." As Sylvie Boisson, the researcher of Foujita's art, mentions, his talent manifested itself already when Foujita enrolled in junior school. When he was fourteen, one of his drawings was selected for demonstration at the 1900 Paris Universal Exposition. Studying in Tokyo, he discovered Western art and began dreaming of traveling to the city where his work was once shown. Foujita's father, general Tsuguakira Fujita, who served as a doctor in the Japanese Imperial Army, didn't protest against the artist's decision to become a painter, though, advised him to study at home. 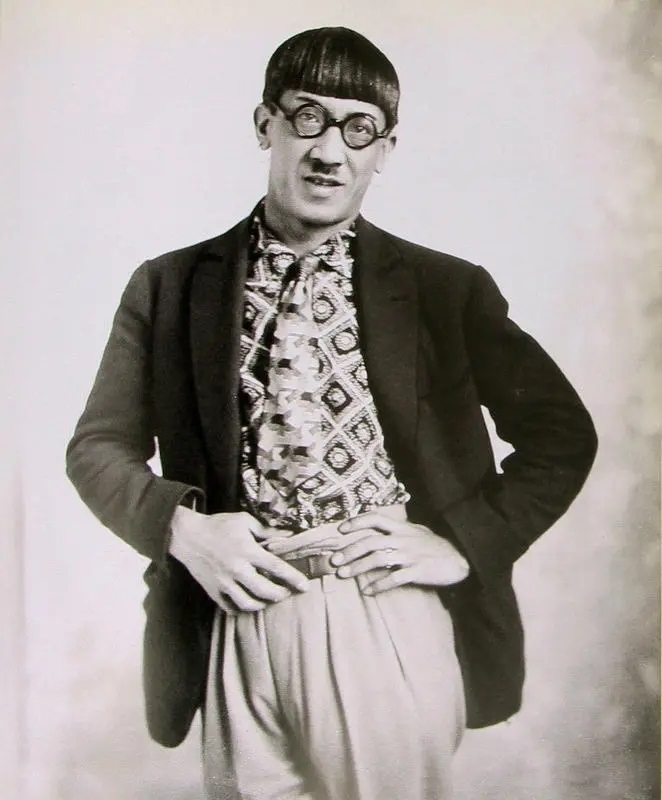 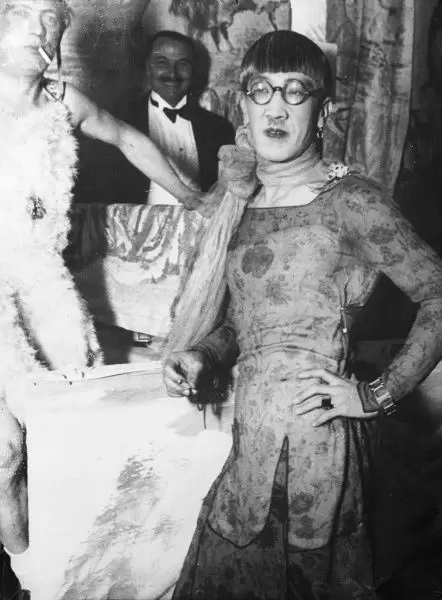 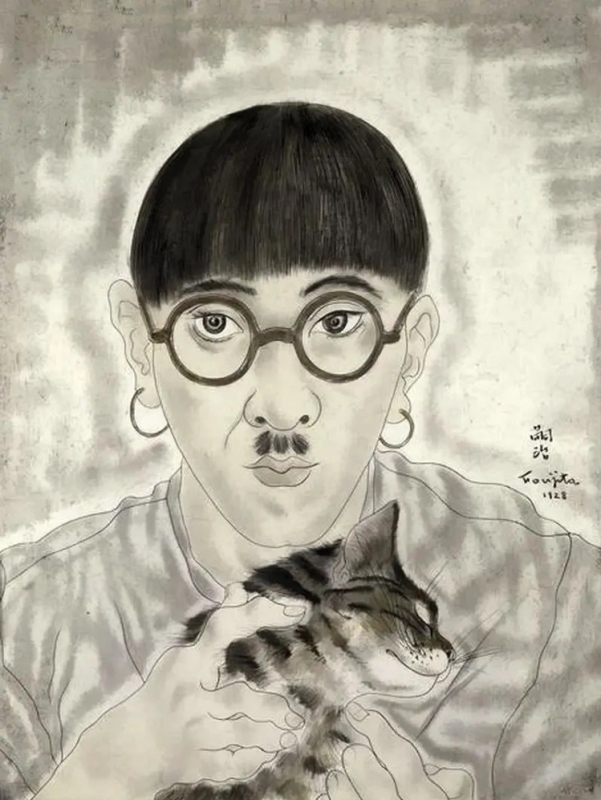 In 1905, Foujita entered the High School of Fine Arts in Tokyo. A year earlier, intrigued by European religion, he started attending the catholic church and also studying French as he was still determined to travel to Paris. After the initial course, he chose Western oil painting as his specialty. The extravagant preferences of this hardworking student were complemented by his memorable appearance that began developing at that time and was finally shaped in the 1920s. He wore a crescent fringe, round horn glasses, and a mustache that's mainly attributed to Hitler in our days. He also added round earrings, bracelets, wooden necklaces, and a tattoo in a shape of a wristwatch to his look. In clothing, the artist preferred kimonos or blouses with vivid patterns. As a whole, his appearance was a surreal variation of Wilde's dandyism that earned him the nickname Fou-fou, "crazy." His French friends also called him Leonard as they found it easier to pronounce. Foujita liked it because he was fond of Da Vinci, and at the end of his life, he officially adopted this name. In 1906, he met his first wife, Tomiko, who studied in the same place. Several years later, in 1910, he graduated with a self-portrait as a degree paper, which would be natural for ego-eccentric Salvador Dali. 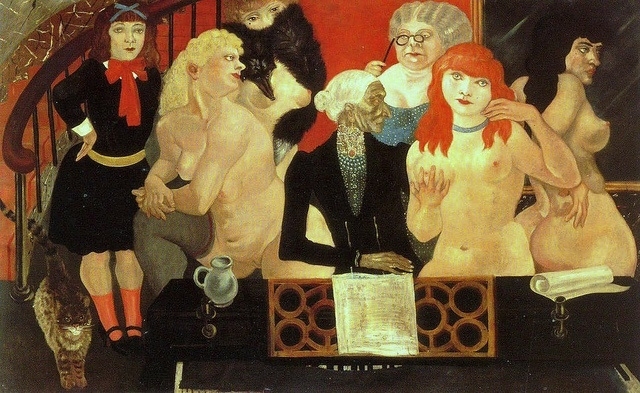 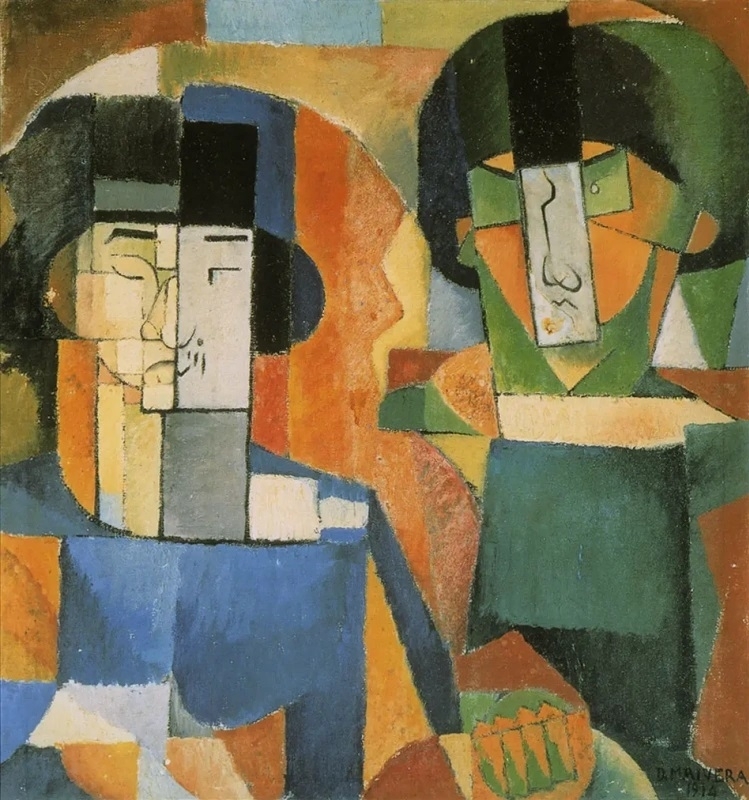 Notwithstanding his growing popularity in Japan, Foujita felt he must go to Paris. His father didn't prevent him from traveling and even offered financial support in case the son would come back three years later. In June 1913, Foujita set off to France. The circumstances of his Parisian life are full of mystifications that Foujita himself loved to produce. Allegedly, he was invited to Picasso's workshop the day after his arrival. Some sources refer to his statement in a letter to Tomiko, that their acquaintance happened only six months later. In Paris, he lived in Montparnasse, in a workshop of his compatriot Riichiro Kawashima, with whom he joined naturism that was promoted by iconic dancer Isadora Duncan and her brother Raymond. This movement implied turning back to the Greek lifestyle, wearing tunics, and dancing in a Greek manner. Montparnasse district (and the French capital in general) was a melting pot for creative people of all cultures and nationalities, so it comes as no surprise, that, eventually, in 1914, Mexican painter Diego Rivera produced a cubist portrait of Foujita and Kawashima wearing Greek tunics (fig.11). 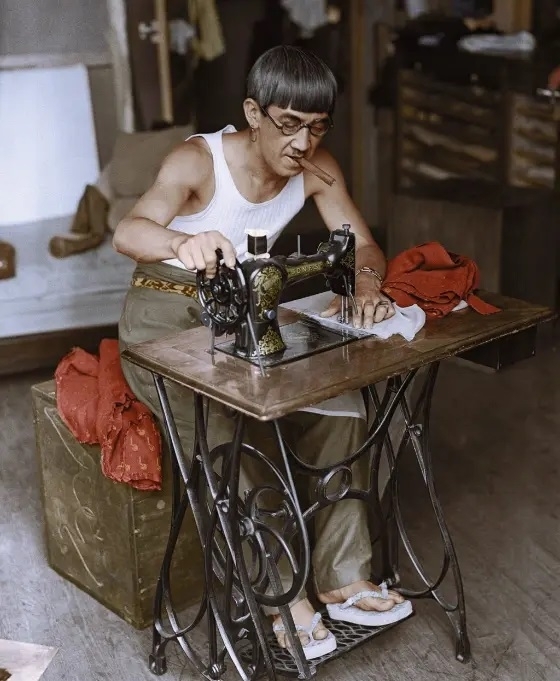 In 1913-1914, Foujita and Kawashima lived next to Modigliani and Soutine, whom they befriended. But then, captivated by exotic naturism, two Japanese artists decided to organize their own idyl and leased a land plot with a house in a Parisian suburb. Unfortunately, they did it shortly before the beginning of WWI, and the land was requisitioned very soon. Not managing with homeless state, Kawashima returned to Japan in 1915, while Foujita left for London, where he worked as an antique restorer and a tailor. In 1916, the artist wrote to his father that he wouldn't come back to Japan, thus, refusing financial help. 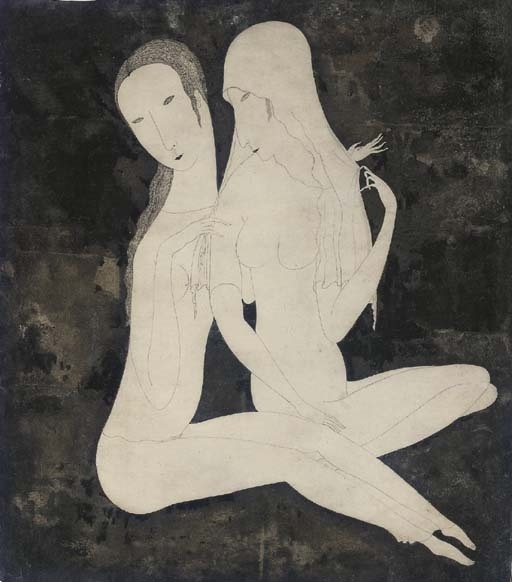 Let's keep in mind that this dandy samurai was impoverished, like many artists during wartime. A stranger amidst the ruins decided to stay in Europe and broke his engagement with Tomiko. He worked passionately, intending to unite East and West in his works. Foujita confessed that in 1914 he burnt 500 paintings, dissatisfied with the result. His poverty ended in 1917 when he met model Fernanda Barry. As a tailor, Foujita won the heart of the model by presenting her with a personally sewn corset. Fernanda, in her turn, burnt her father's gift, a carved chair in the style of Louis XV, to heat her house for Foujita. Two weeks after their first meeting the artist and the model got married. 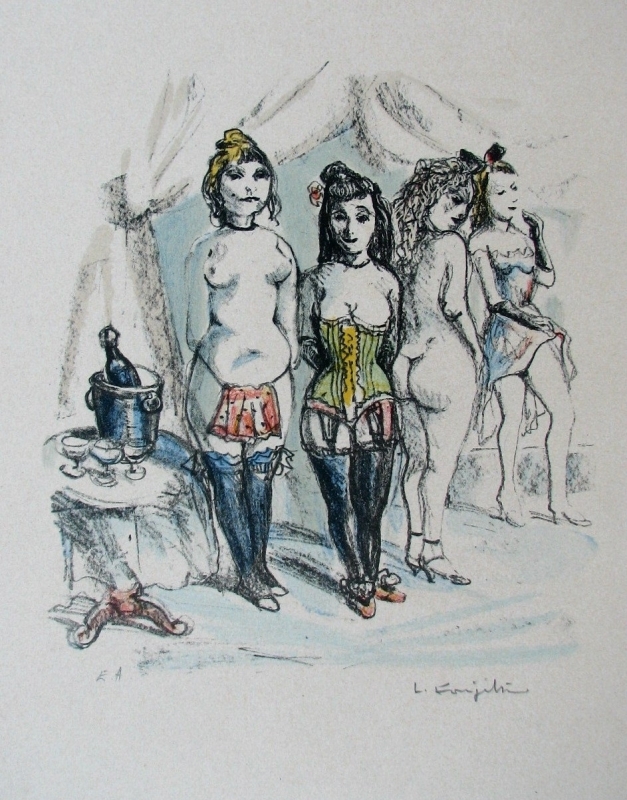 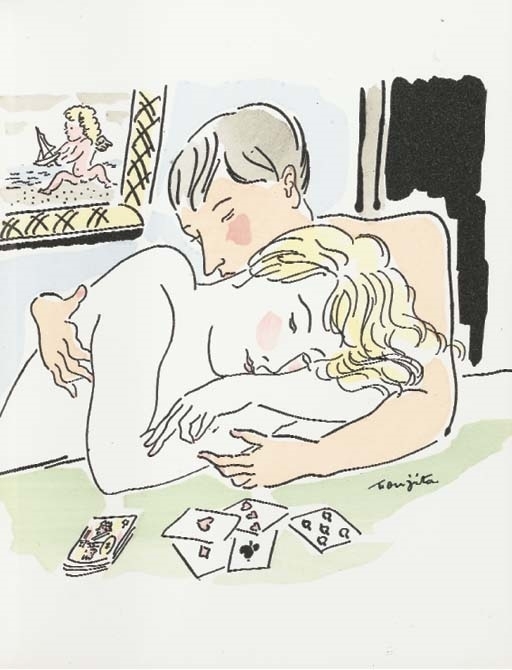 Fernanda began actively promoting her husband's work, thus, bringing him commercial success. As mentioned above, Foujita studied oil painting at the High School of Fine Arts in his homeland. When the artist arrived in Paris, he couldn't afford oil paints, so he worked in graphics and watercolor. His first personal exhibition, held at Georges Chéron's gallery, consisted of 110 watercolors. All the showpieces were sold right there, and the excited gallery owner offered Foujita to produce at least two paintings a day, though he could pay only 6-7 francs per each. According to Foujita, Picasso visited the exhibition on the opening day and spent several hours studying the paintings. The artist finally could afford oil paints and began to create magic. 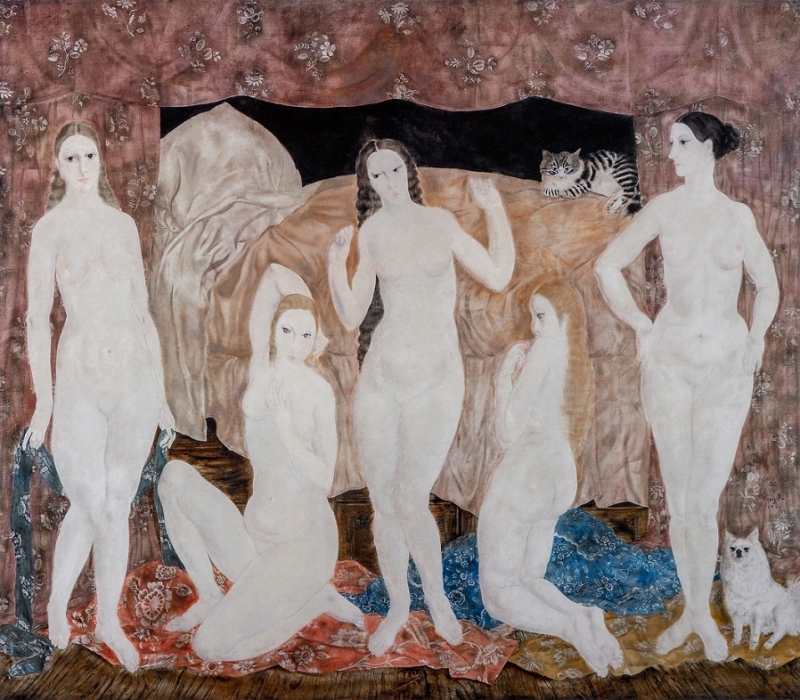 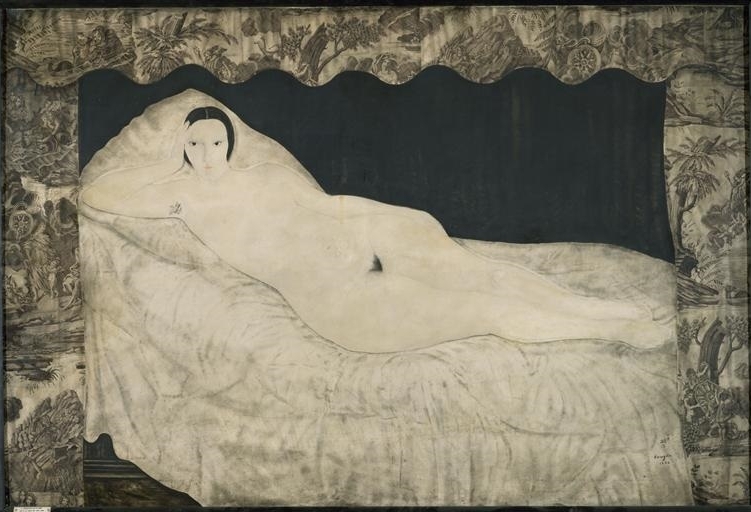 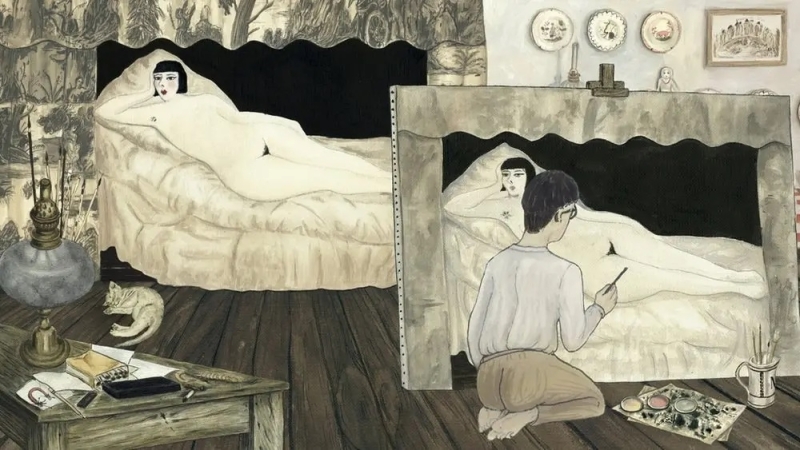 The Most Beautiful Of Materials

"One day, I suddenly realized that there is very little nude female nature in Japanese painting. In the paintings by Harunobu or Utamaro, only parts of the hand or a small area of skin near the knee are barely visible. I was the first to decide to try to depict the most beautiful of materials: human skin." – Foujita (arthive.com). In the 1920s, the artist chose his main subjects, cats and nudes, whose depictions he exhibited at the Parisian salon. The great success was his portrait of nude Kiki de Montparnasse framed by toile de jouy curtain. The audience was amazed by the skin pearl tone and exotic flatness of the silhouette. After finishing the oil painting, Foujita applied a thin ink contour in a traditional Japanese technique, which gave an Asian vibe to the European image. His legendary milky glaze components were kept secret for many years. The artist kneaded crushed chalk in linseed oil and added magnesium silicate. One of his milky reclining nudes is depicted in a pose resembling that of Manet's Olympia (fig. 20) with a cat sitting on a bed. Curiously, early nudes of Foujita resemble those of European avant-garde painters like Modigliani and at the same time wear the similarity to the Japanese manner. Later nudes look as if they were influenced majorly by Titian and Michelangelo’s frescos (hyperbolized anatomy). 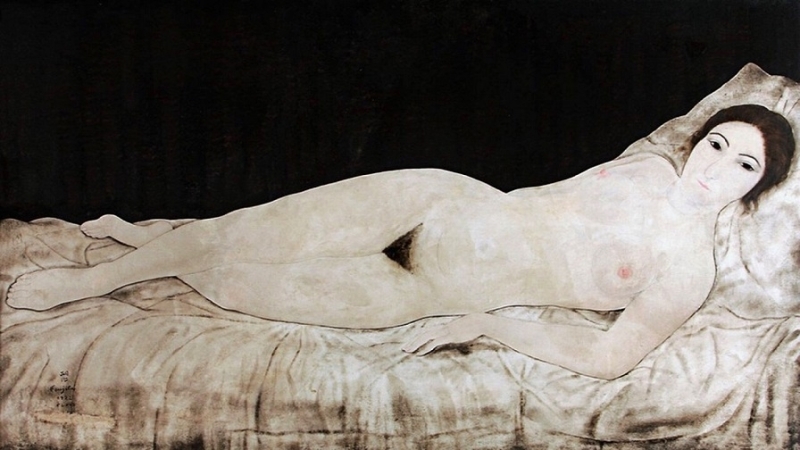 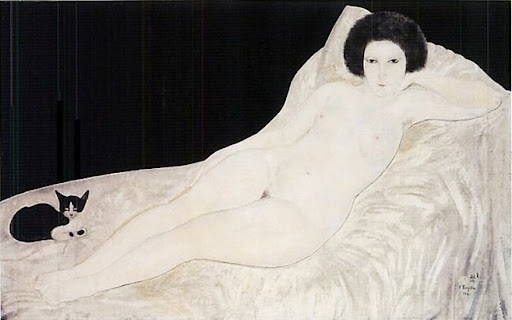 In Premium you can find the complete, comprehensive study on Foujita's sensual work, including his Goddess Of The Snow, more on his love triangles, the painting that took him 174 hours, and more than twice as much images...