The young Salvador Dali (1904-1989) was a great admirer of Sigmund Freud’s theories of dream interpretation, like him seeing the pervasiveness of the suppressed sexual urge behind every expression of the unconscious as manifested in dreams. 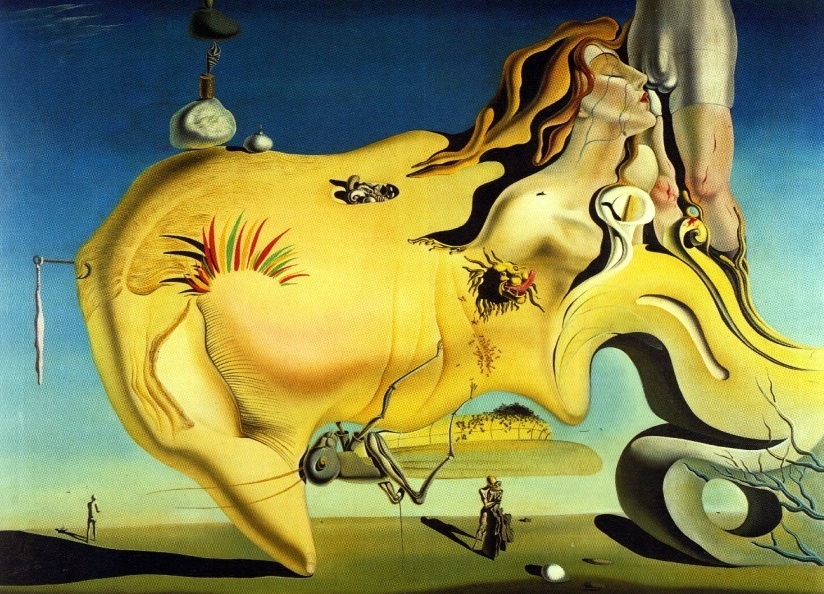 The Great Masturbator (1929) is a machine which appears to take its inspiration from the “apparatus pictures” of De Chirico, Miro and Tanguy. The very emphasis of the mechanical element, as encountered in the title “Masturbator”, bears witness to the extent to which our lives are determined by the secret forces of Eros.

The central subject of the picture is a soft head (self-portrait of Dali). It looks as if it is malleable to the touch; fatigued, sexually spent: the eyes closed, and the cheeks flushed. While this is also a feature of the two key pictures from the same year, The Lugubrious Game and The Enigma of Desire…, the motif as portrayed in The Great Masturbator is isolated. Overly long eyebrows embellish the closed eyes, and a huge nose props itself on the ground.

The mouth has been replaced by an oversized grasshopper (Fig.2), which can simultaneously be regarded as a phallus. From early childhood, Dalí had a phobia of grasshoppers and the appearance of one here suggests his feelings of hysterical fear and a loss of voice or control. 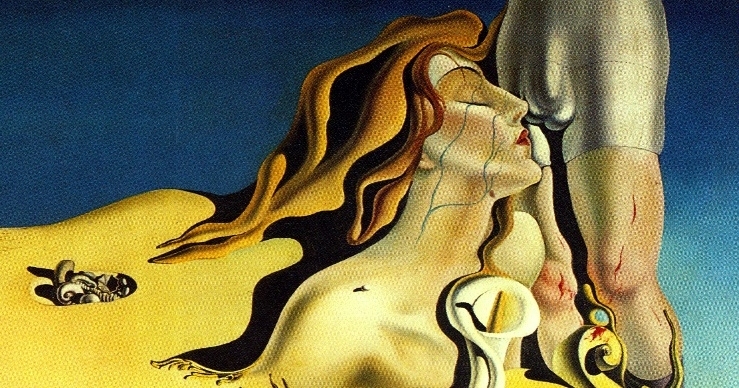 The head is finished off on the right-hand side by art nouveau ornamentation, out of which the bust of a woman (Fig.3), seemingly caressing a male organ, is growing. The man’s legs are cut and bleeding, implying a fear of castration. Dali has assembled this machine as if it consisted of individual dream fragments. It stands in the centre, oversize, apparently dominating everything, even two lovers embracing each other in its shadow. 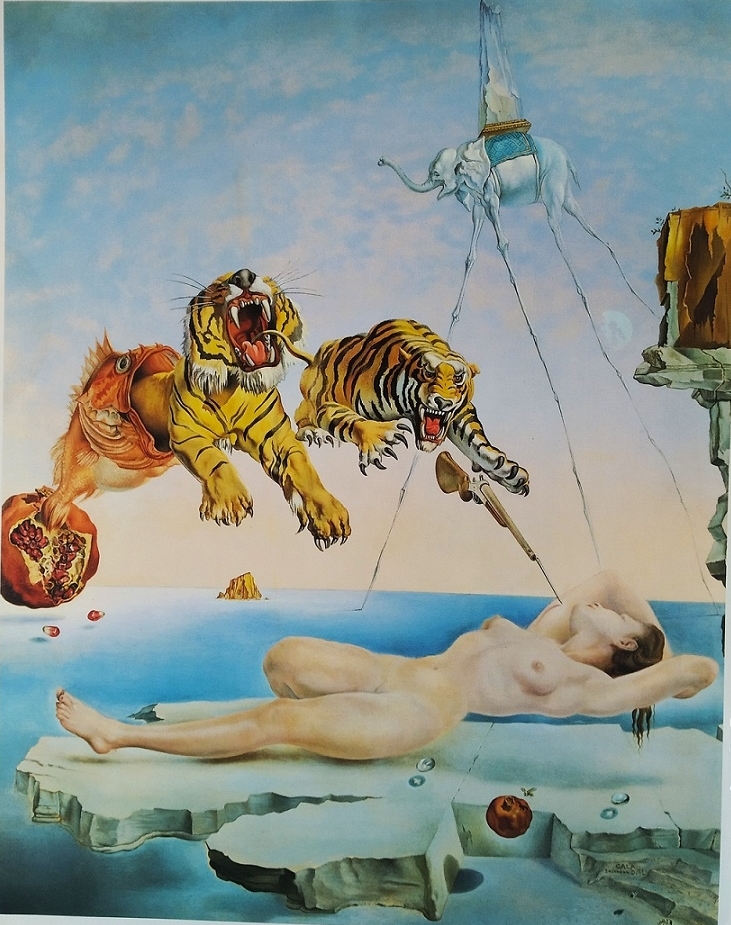 This work (Fig.4) also represents an artistic treatment of Freud’s writings. At the same time, it points to the ‘classic’ Dali, working increasingly since the mid-1940s with motifs from art history. For example, the elephant (Fig.5) may be traced back to a statue by Gian Lorenzo Bernini in Rome. The artist removes from the beast its bulky earthly weight, making it soar heavenwards on ethereal flamingo-like legs. 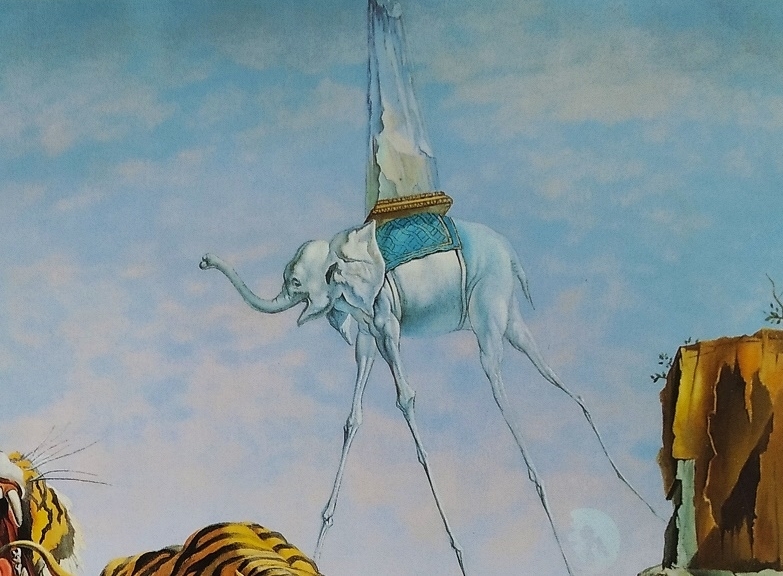 Likewise, the obelisk on its back is composed not of stone but rather of translucent crystal. The picture’s central focus is Gala (Dali’s muse) asleep, floating over a surreal landscape. According to Dali, the buzzing bee communicates a danger (its sting) to the unconscious of the resting woman, thereby triggering a dream. 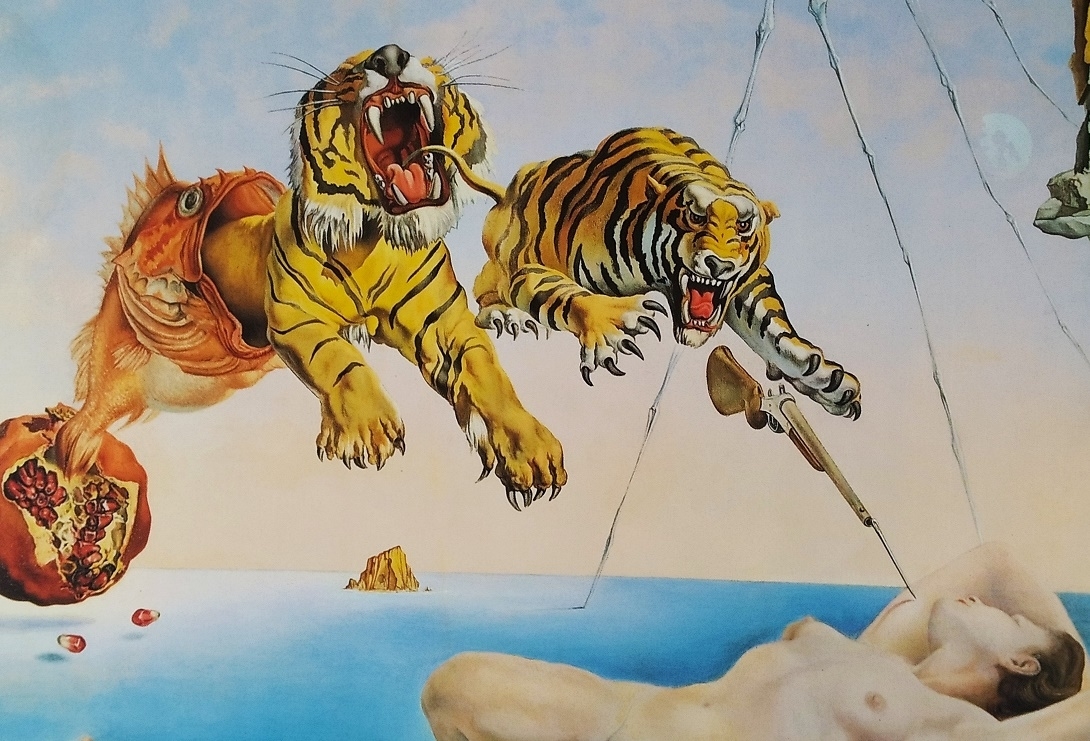 In assembling the dream’s content, Dali quotes classical images from Freud’s dream symbolism. Thus the two tigers (Fig.6) embody the awakened unconscious urges, taking hold like a nightmare from within the sleeper’s subconscious. The pomegranate represents female fertility, the fish and the bayonet male potency. The artist thus illustrates the unconscious wish for sexual intercourse by means of a pictorial metaphor.

Click HERE for the sensual surrealism of Michael Hutter or here for the phallic universe of the Dutch surrealist Hans Kanters…!!

Caribbean Dreams in the Paintings of Antoine Molinero
04 februari 2022