The Phallic Universe of the Dutch Surrealist Artist Hans Kanters

The self-taught Dutch artist Hans Kanters (1947) has been drawing ever since he was a child. The paint box he got from his father opened new perspectives, and after that drawing became second nature to him. His urge to draw is accompanied by the interest and attention he devotes to the technical potentials of what he calls his “craft”.

Kanters’ work is difficult to describe. Anyone who wants to understand the painted world of Kanters will have to move between the extras, mutations and metaphors. He shows that nothing is impossible in painting, his creatures take all possible forms that arise from the painter’s mind.

Kanters did not attend an official art academy, but this never bothered him. He more than compensated for this lack by his inquisitiveness and hunger to learn when it came to the numerous manifestations of art available in the 1950s and 60s via books and museums in the Netherlands as abroad. 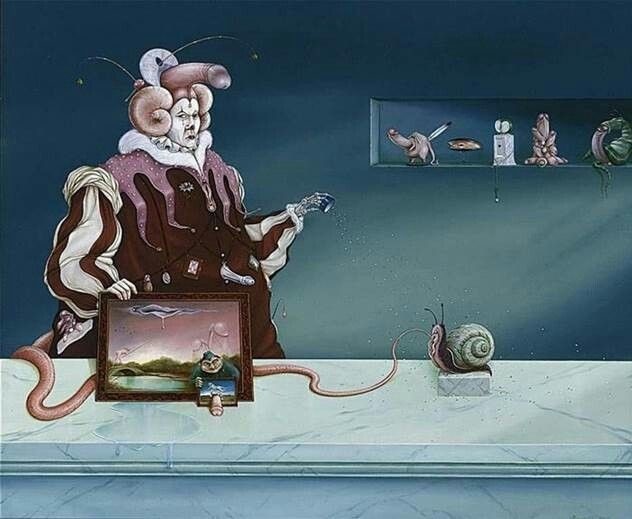 It was with the greatest of ease that he then mastered the art of painting. In the course of time, his excessive self-discipline has earned him technical mastery of the very highest sort. The immense interest and care devoted to the technical side of painting were instrumental in determining the total quality of his work. 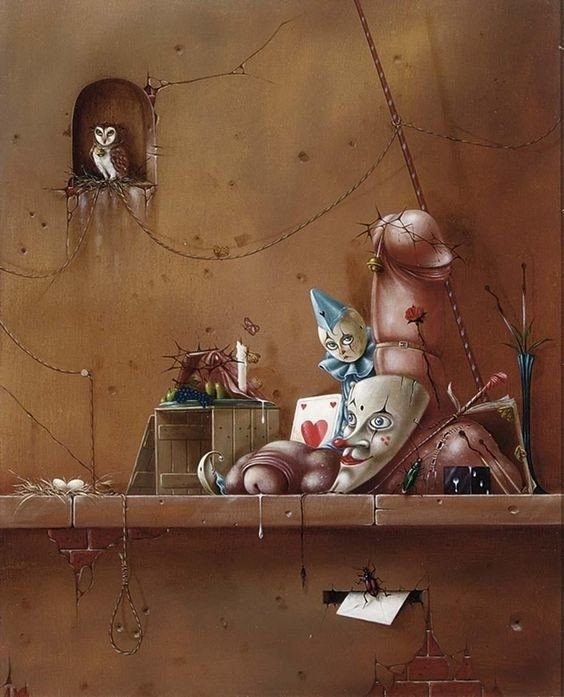 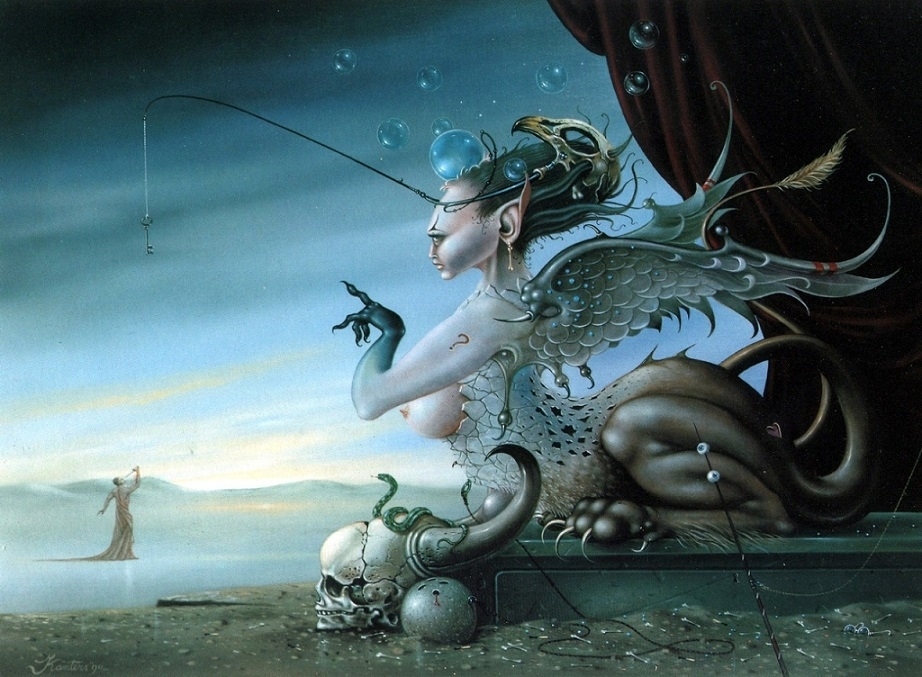 In their variety, these genital symbols become the direct or indirect object in the story, with a furtive grin or grotesque smirk fortunately peeking round the corner now and then, reducing the “weight” of the parts. 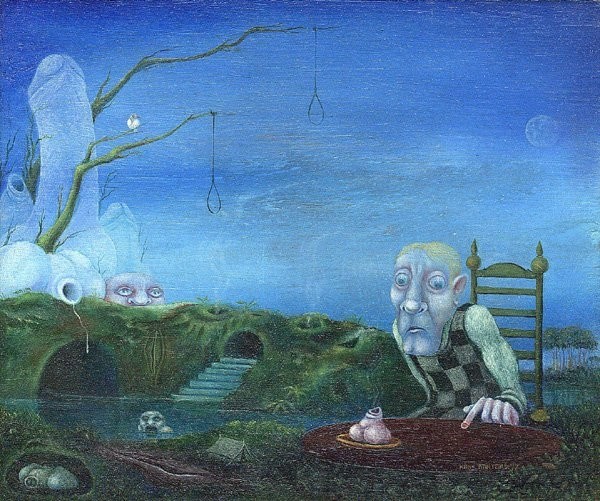 They can also be dominant at times, standing square in the limelight, voracious or extravagant, satanic or mischievous, atrocious or sorrowful. A complete masquerade or carnaval of the genders can be discerned in the early work, with symbolic references that, unlike those of the more melancholy Melle, infused with irony, parody and banter. And are at the same time connected through a panorama of grotesque detail with a modern-life feeling. 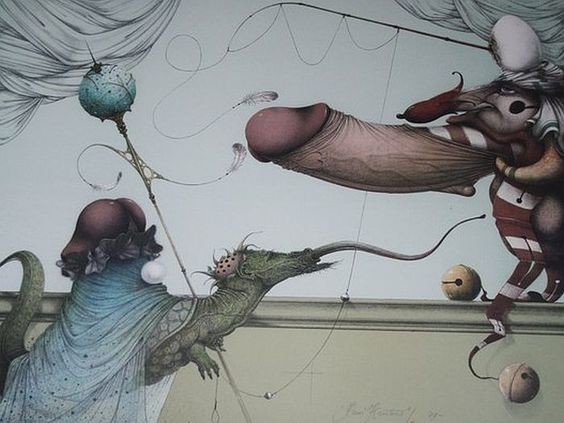 This way, Kanters turns inside out the obscure, the absurd, the trivial, the oppressed, the lunatic, the confused, the dreamed and the poetic sides of the human soul. 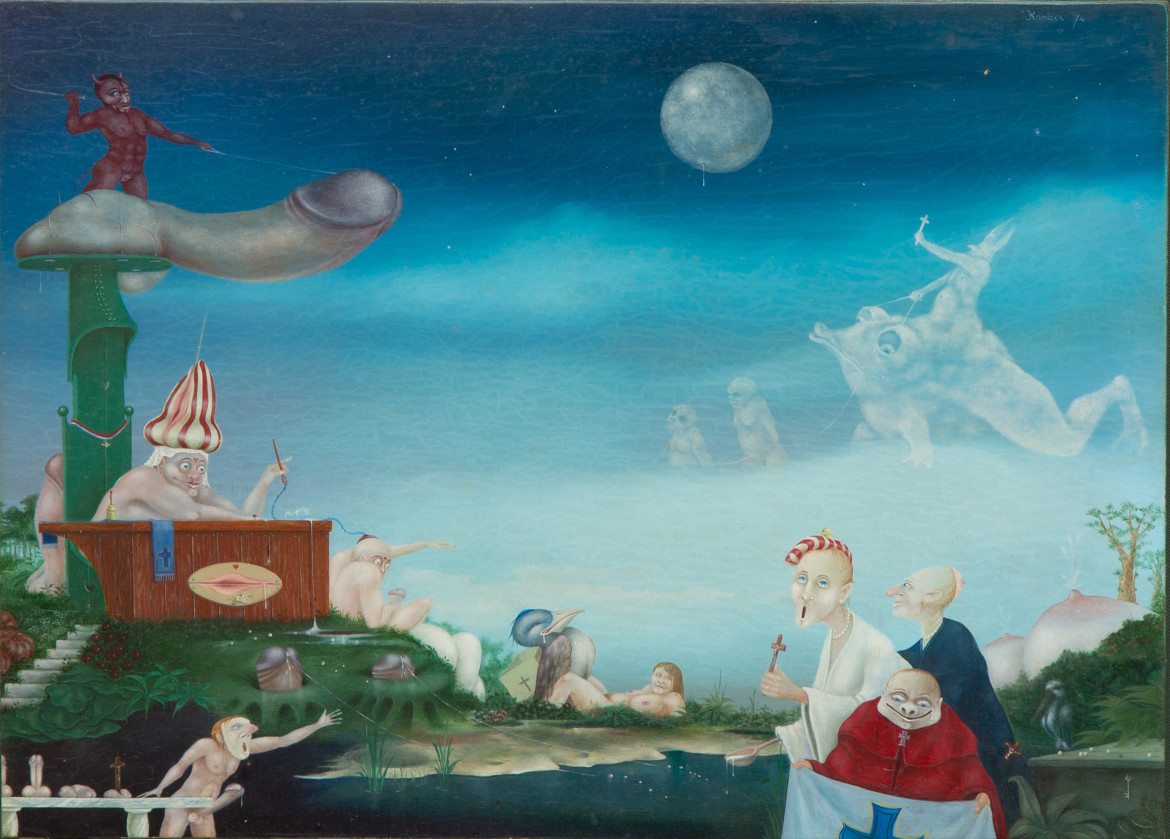 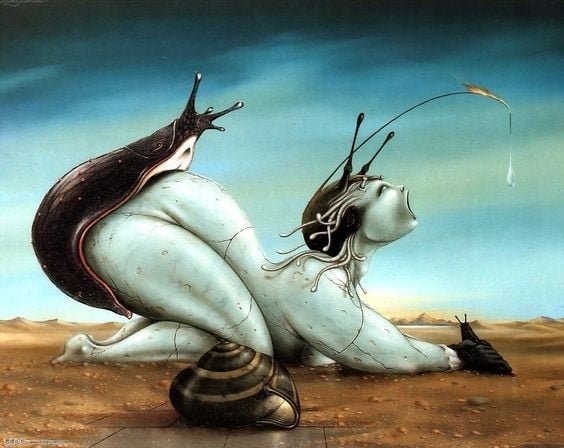 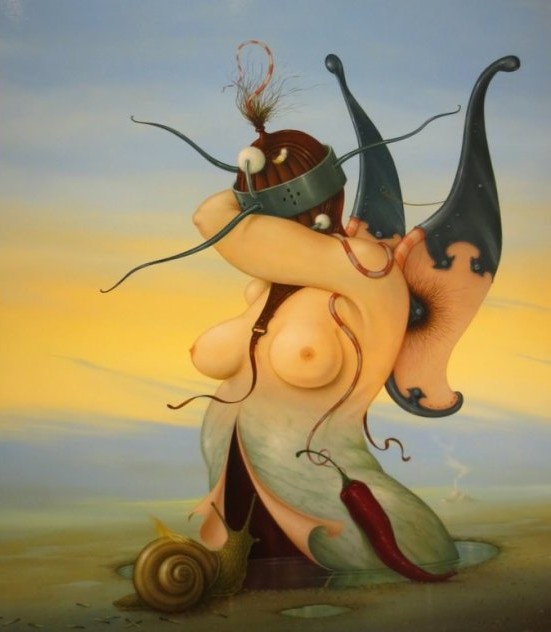 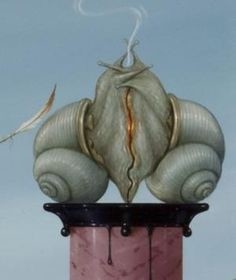 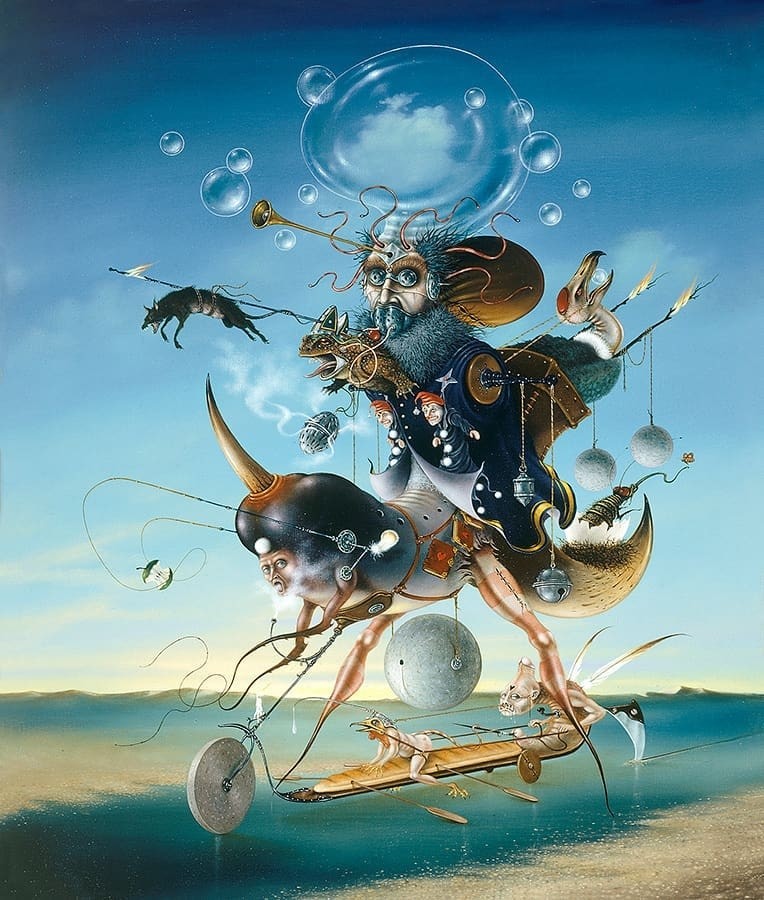 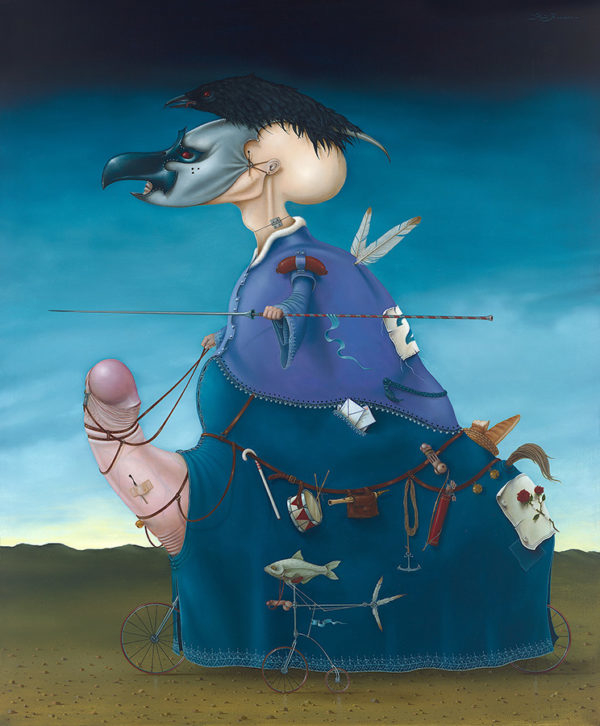 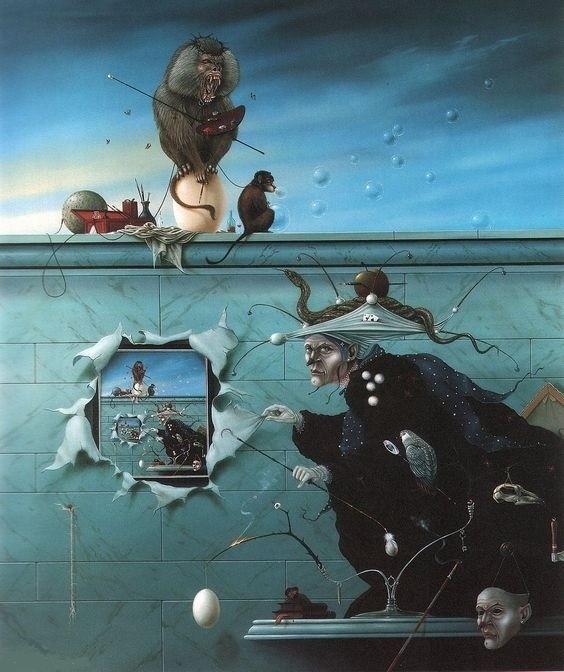 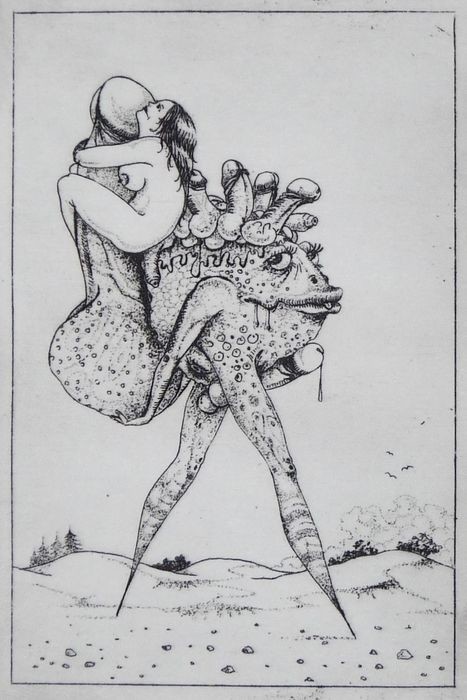 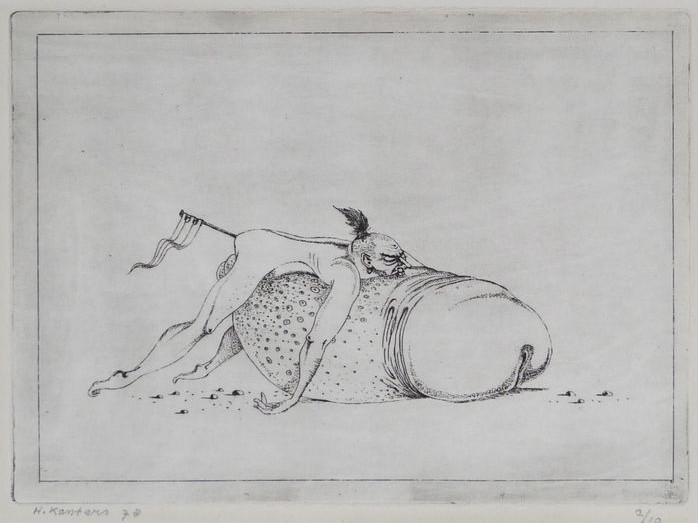 *Melle Oldeboerrigter became known as an artist under the name Melle. He never really became very well known to the general public, but he was praised among artists. A number of figurative artists such as Wout Muller and Mathijs Röling are clearly indebted to Melle, who in part got his inspiration from Jeroen Bosch.

Melle was a painter who did not care about an audience or what was socially acceptable. Therefore, genitals can be found everywhere in his paintings. Even animals walk around with clear human erections. That immediately made the work somewhat difficult to sell. In addition, many of his paintings, following Bosch, are somewhat chaotic to say the least.

This has the advantage that you can look at such a painting for a long time, because it contains so many details that you can always discover something new. He cannot be denied a sense of humor. Obviously, it wasn’t just him doing the shock effect. 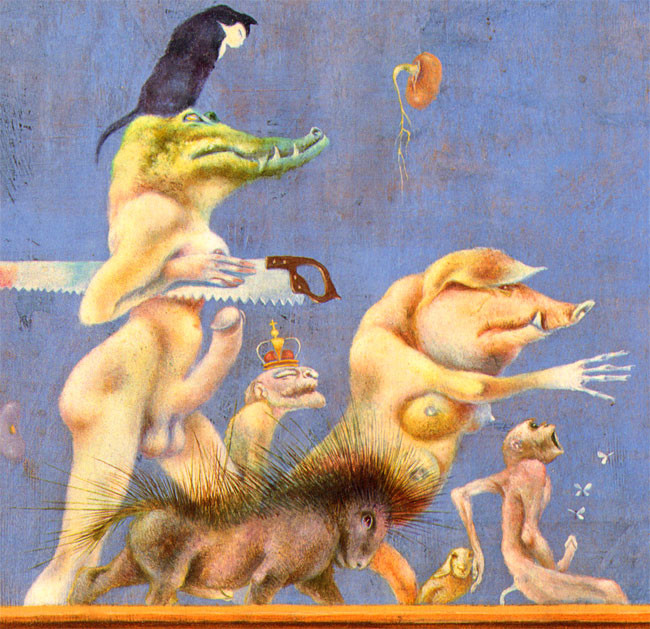 What do you think about the art of Hans Kanters? Leave your feedback in the comment box below….!!

Feels like Dali and Bosch, inspired by the snail of Kuniyoshi, in one.

Thanks Darya, You hit the nail on the head! I am not sure about Kuniyoshi, but both Dali and Bosch are influences of Kanters.