What if Gustave Dore (1832-1883) started to produce spring images inspired by members of the Utagawa school?

Nowadays, we can answer this question by using an artificial neural network, but in the first half of the twentieth century, the answer was already known. The alchemic process of the conjugation of something incongruous expectably took place in the brain belonged to a surrealist.

Max Ernst (1891-1976) was a German painter, sculptor, graphic artist, and poet. His artistic world, formed by Freudianism and occultism, is very diverse and provocative: the most well-known oeuvres by Ernst are The Blessed Virgin Chastising the Infant Jesus (Fig.1), and Of This Men Shall Know Nothing (Fig.2). With his bestial creatures and dark landscapes, he was the Bosch of surrealism. 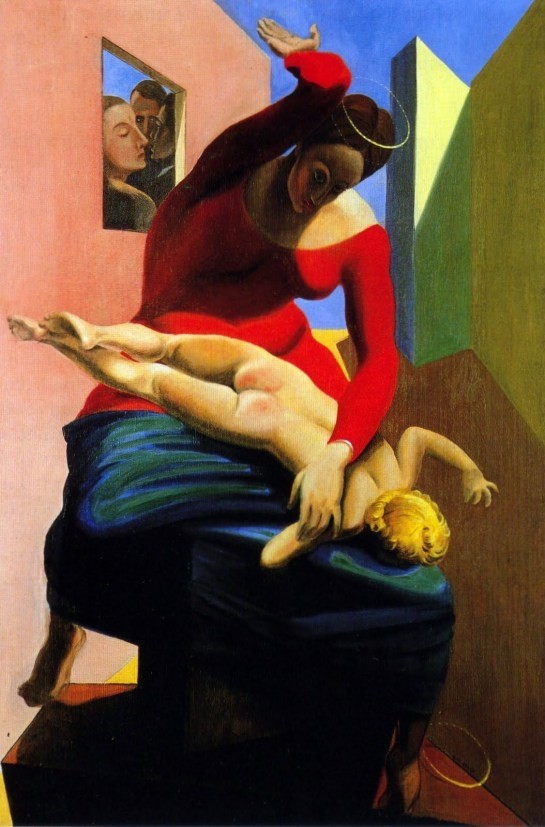 A Week of Kindness

Working within the group of surrealists, Ernst invented many specific genres, such as a novel-collage that had a form of a series of collages with comments. Today we’ll examine pictures from the novel Une Semaine de Bonte (A Week of Kindness, 1934 – Fig.3). 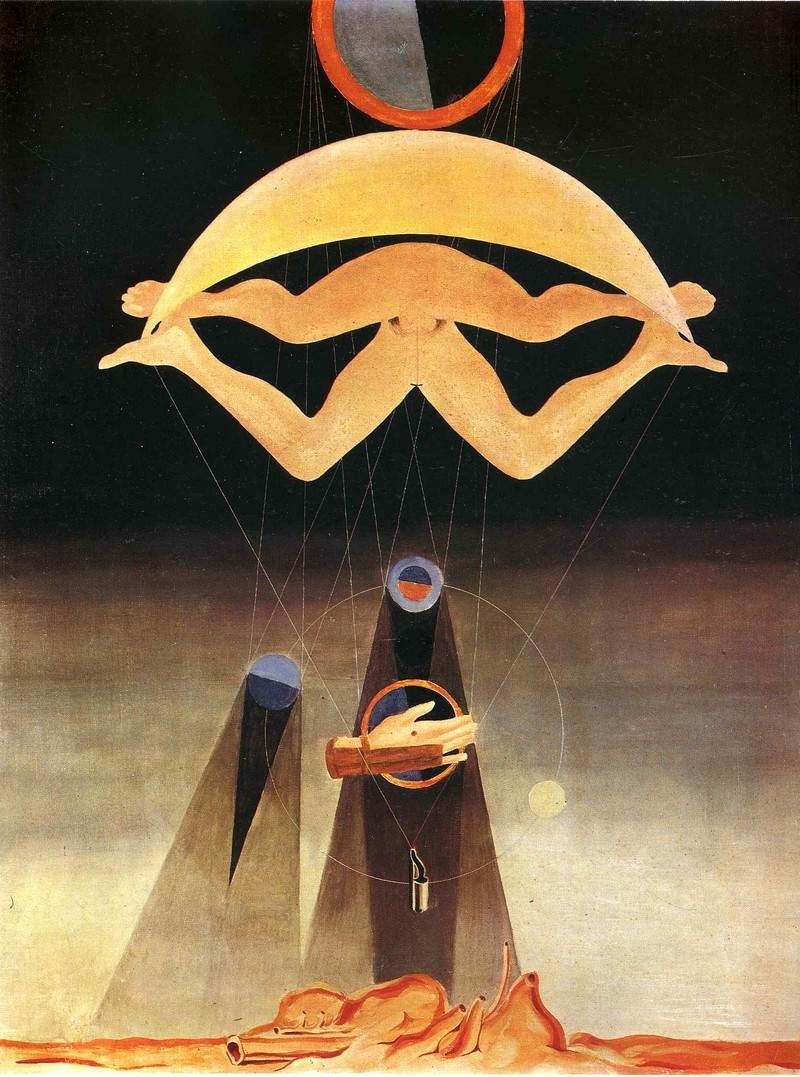 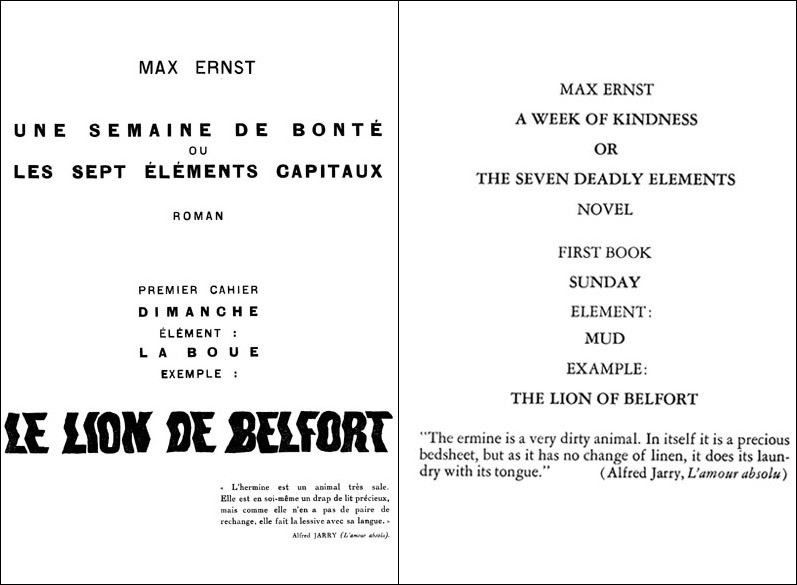 Ernst created the book using “complete existing illustrations as base-pictures, altering them with pasted-on additions. His base-pictures were chiefly the relatively crude and usually lurid wood-engraved illustrations of French popular fiction that were plentiful in the books and periodicals of the late nineteenth century.

The subject matter of such literature was torrid love, torture, crimes passionnels and the subsequent incarcerations and executions (by guillotine), hatreds and jealousies among the very wealthy and the very indigent: the inferior spawn of Eugene Sue and Emile Zola. Ernst made his trip to Italy with a suitcase full of such pages” (the publisher’s note). 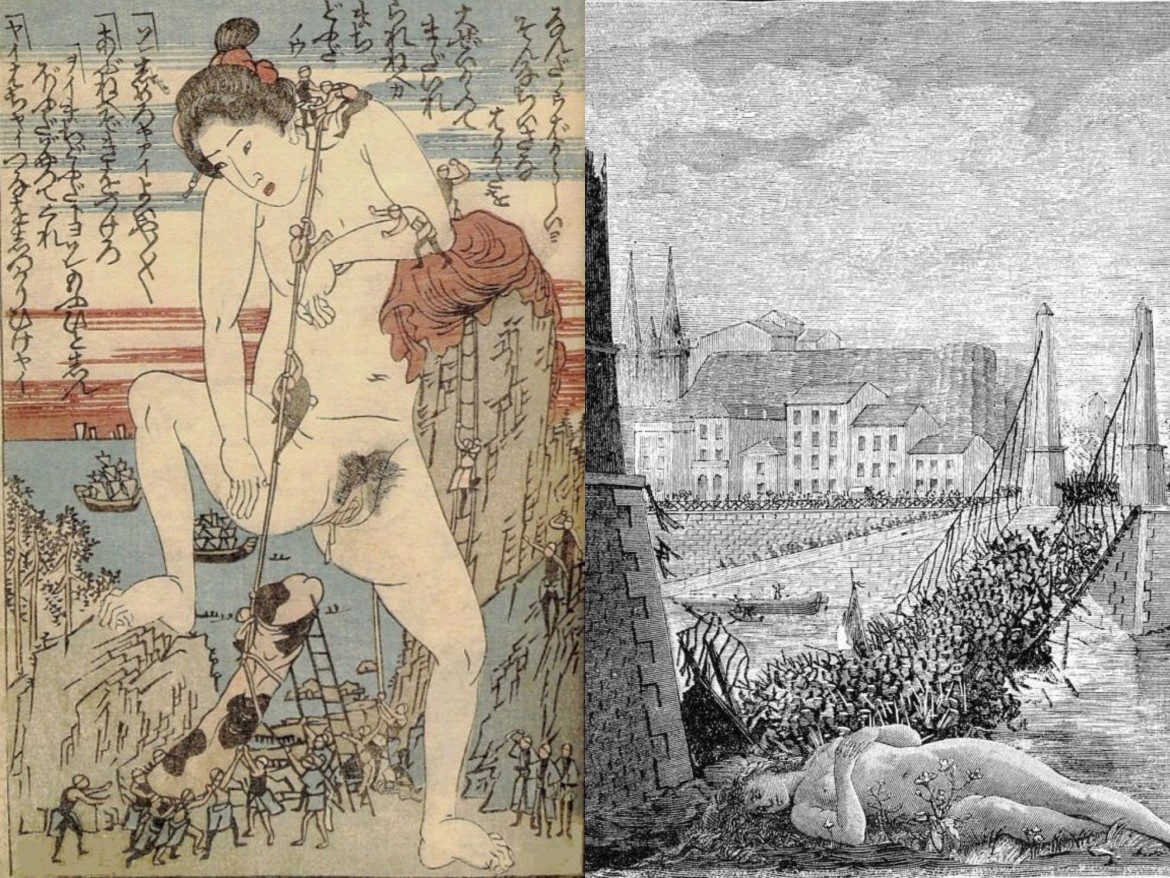 Right: p. 41 of the novel A Week of Kindness by Max Ernst (right). An image relates to the second chapter that corresponds to Monday and water. The chapter has an epigraph from Benjamin Peret’s text Endormi (The Sleeping): “D. – What do you see? R. – Water. D. – What color is this water? R. – The color of water.” This chapter is full of the crafted images of naked sleeping beauties. Blankets in these images turn into waves, and giant women are a clear reference to the mythologic birth of Aphrodite. 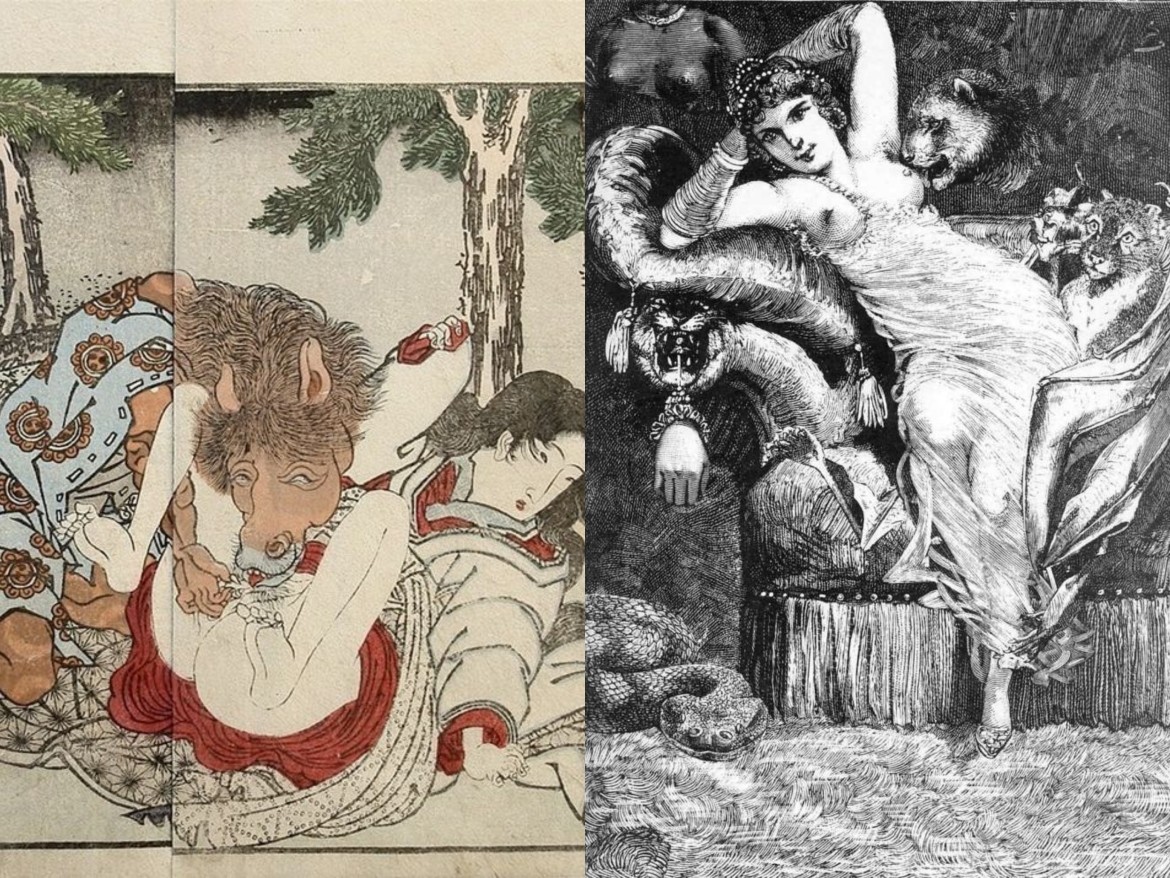 Right: p. 28 of the novel by Ernst. The image relates to the first chapter that corresponds to Sunday and mud. The epigraph is taken from the text L’amour absolu by Alfred Jarry: “The ermine is a very dirty animal. In itself it is a precious bedsheet, but as it has no change of linen, it does its laundry with its tongue.” The woman in the picture is a femme fatale surrounded by wild, dangerous beasts. The snake recalls the biblical story of Adam and Eve.

Two lions and a leopard may be a reference to mythologic followers of Dionysus called maenads. These ecstatic women were known for their furiousness. Being possessed by the god, who ruins all barriers of ratio and soberness, they became bestial and could murder their own family, at the same time giving their breasts to cubs in the woods. 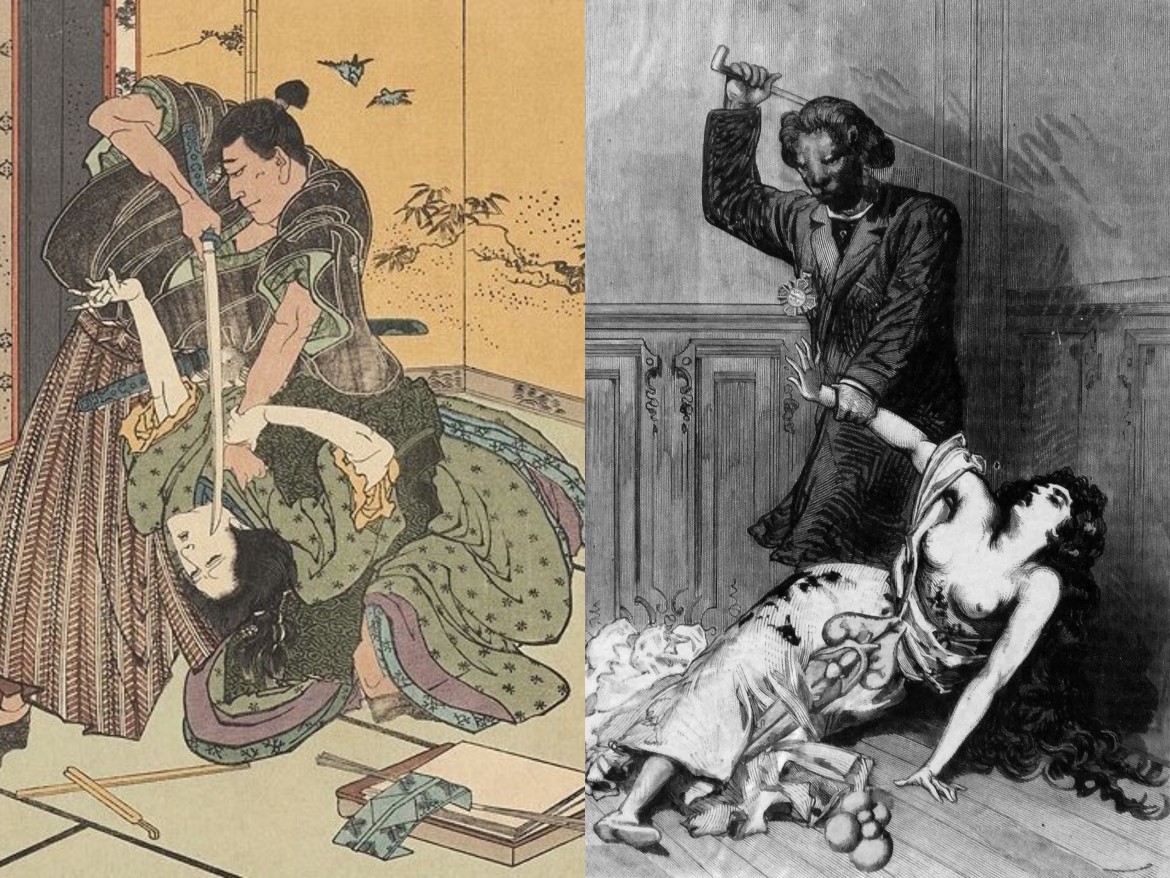 Right: p. 32 of the novel by Ernst. The image belongs within the first chapter as a previous one. The lion-headed man beats the woman with a stick, which reminds of the statement from Nietzsche’s book Thus spoke Zarathustra (1883-1885): “Thou goest to women? Do not forget thy whip!” 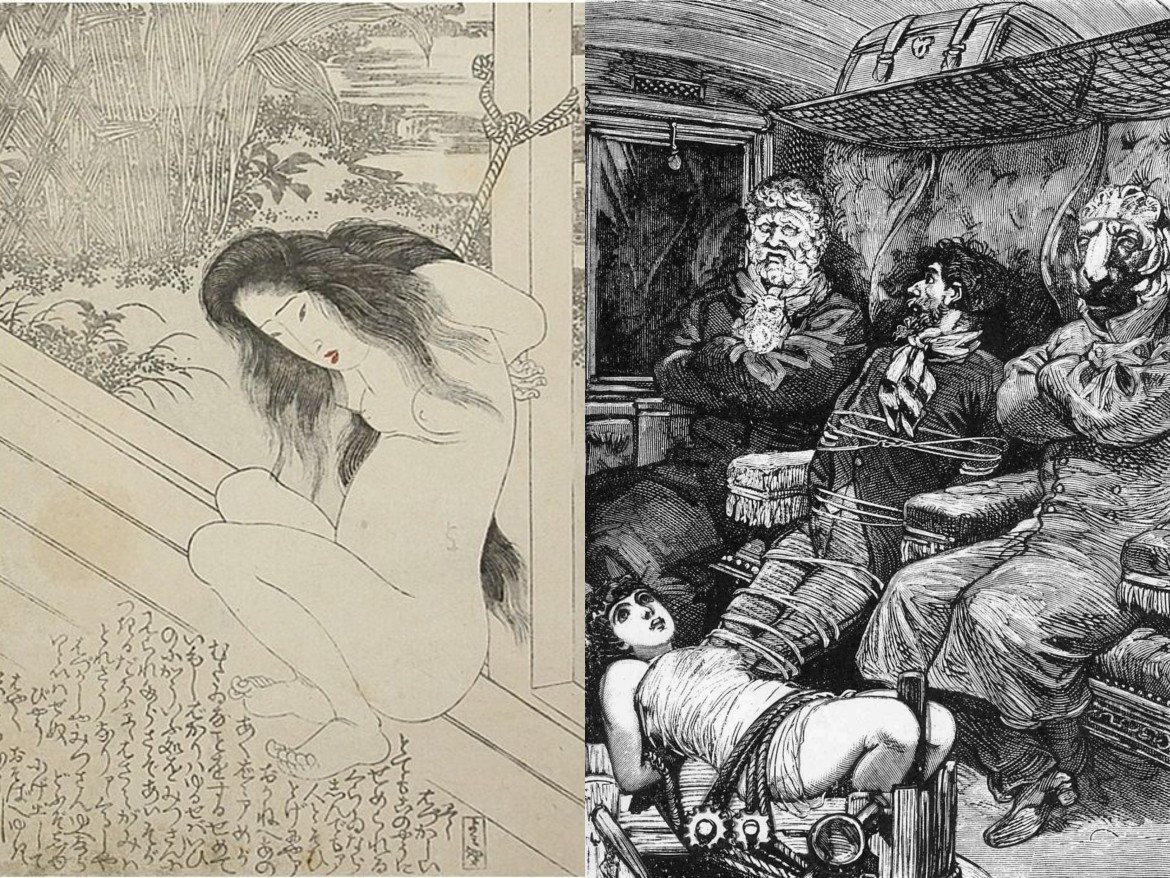 Right: p. 20 of A Week of Kindness. Tied man and woman both bring to mind Japanese shibari (bondage) art. 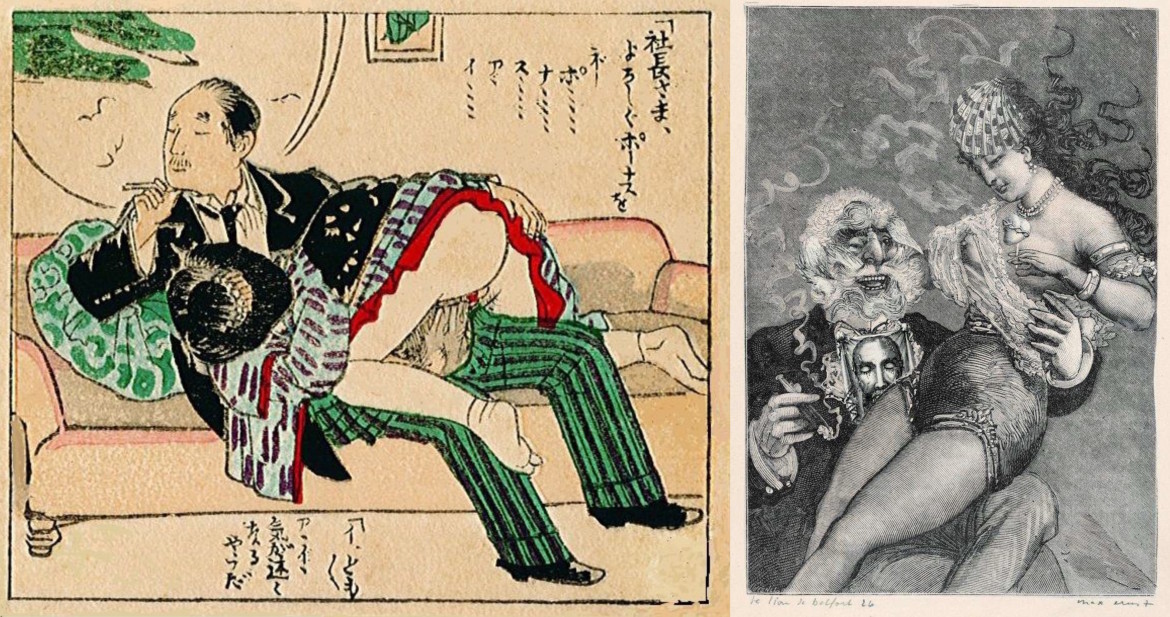 Right: p. 29 of A Week of Kindness, the first chapter. The woman wearing a seashell as a hat sits on the lap of the aristocrat. The shell and the frivolous pose of the woman together can be a sign of so-called vulgar Aphrodite mentioned in Plato’s Symposium. 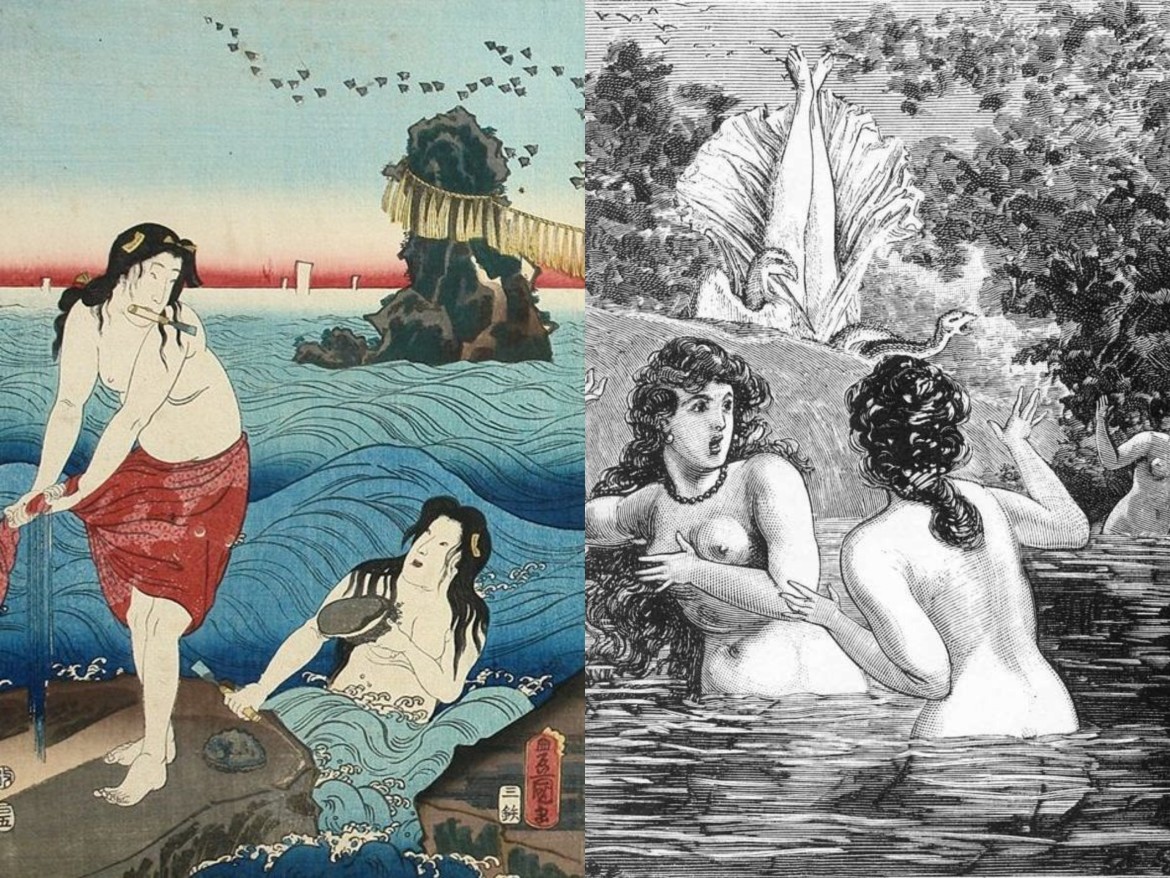 Right: p. 44 of the novel by Ernst, the second chapter. The combination of female legs and dress on the background reminds of a flower and also of the large seashell from Botticelli’s painting The Birth of Venus. 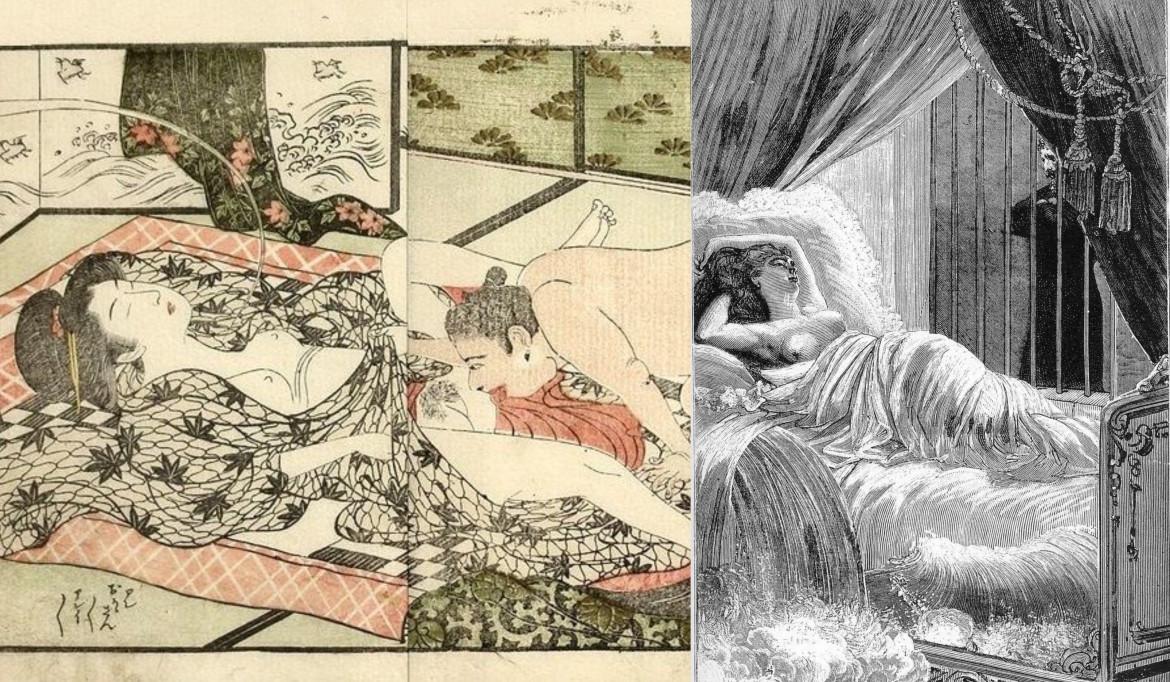 Right: p. 48 of the novel by Max Ernst, the second chapter. This picture reminds me of the depiction of Princess Tarakanova by Konstantin Flavitsky (1864), where the imprisoned woman is being killed by the flood. 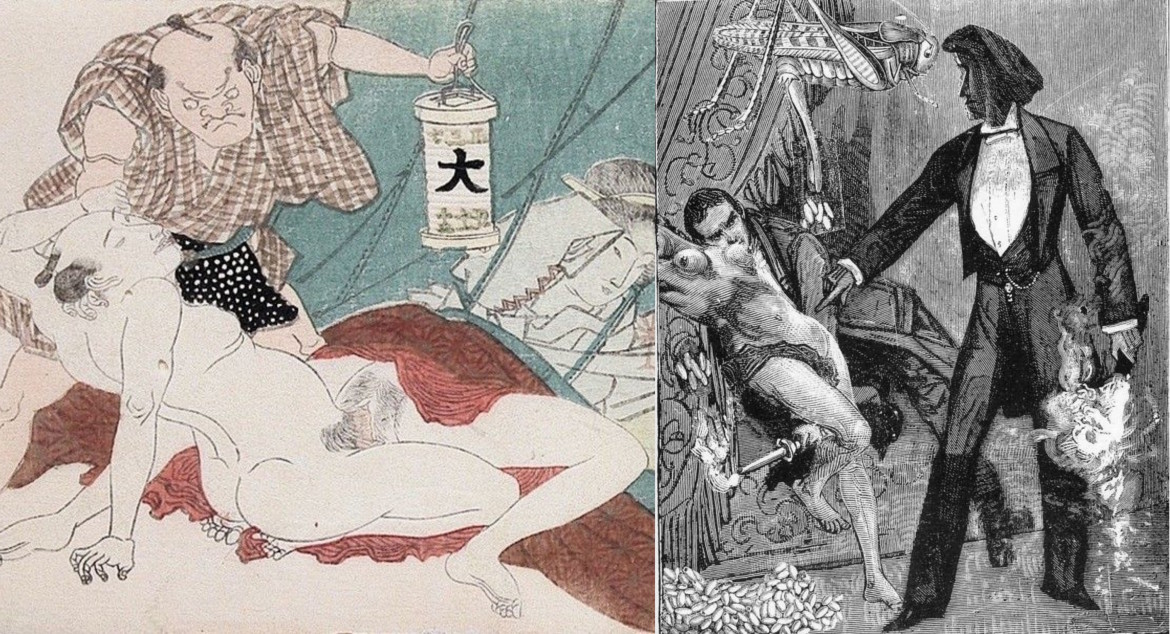 Right: p. 163 of the novel by Ernst. The image belongs within the fifth chapter that relates to Thursday and Blackness. The epigraph is taken from Jean Arp’s poem: “The stones are full of entrails. Bravo. Bravo.” The ‘plot’ of this image can be associated with different things in dependence of the viewer’s background. Being a Russian, I recognize here the play The Stone Guest by Pushkin.

It’s a story based on the legend of Don Juan. According to the plot, Don Juan murders Commander de Salva and seduces the widow. After that, he invites the statue from the Commander’s grave to stand watch during the date. The statue agrees and then “during the date they hear the stone steps of the Commander. The statue offers a hand to Don Juan, he boldly takes it, and they both descend through the floor (wiki).” 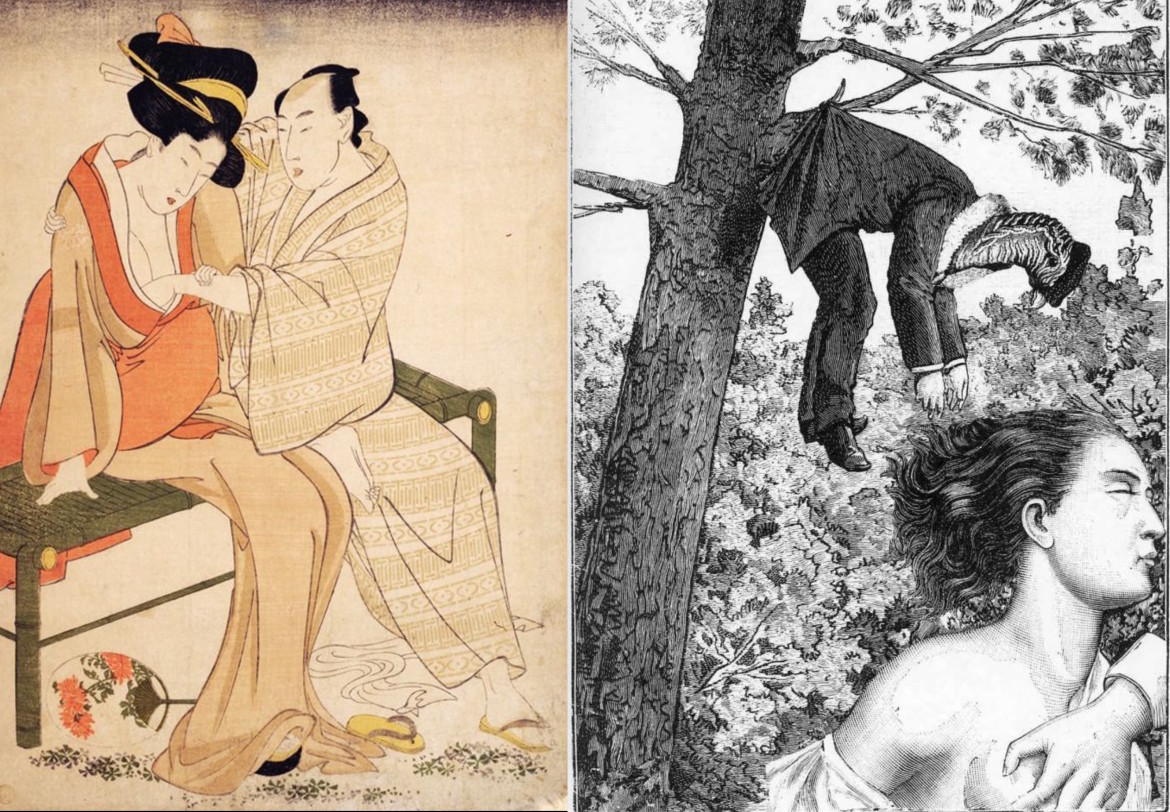 Right: p. 117 of the novel A Week of Kindness. The image is from the fourth chapter related to Wednesday and Blood with Oedipus as an example. “The leading figures in the pages of this section have birds’ heads; Ernst claimed to have a bird-headed visitant named Loplop (often portrayed in his work) who made revelations to him.” (the publisher’s preface) 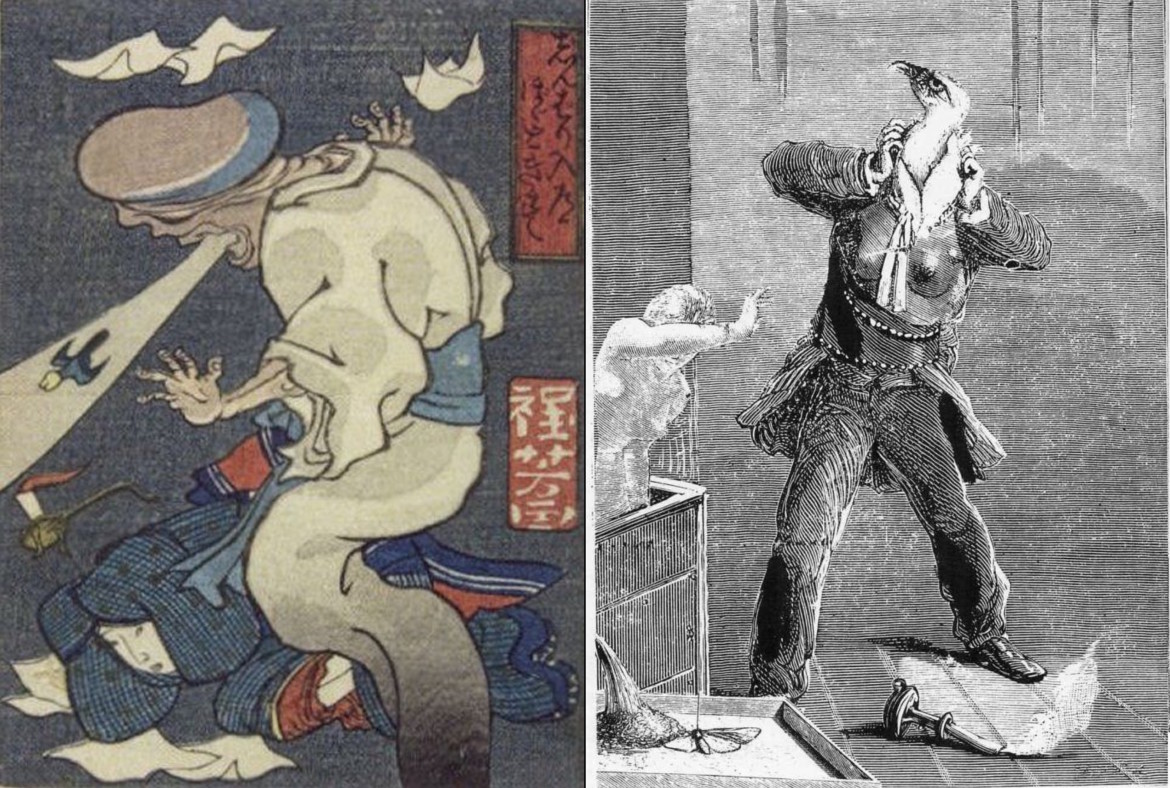 Right: p. 114 of the novel by Ernst. The image belongs to the fourth chapter as the previous one. The creature with female breasts brings to mind Sphynx who is a lion with a human head and female breasts.

*This image of the Utamaro print is taken from here!

Let us know what you think about the above article in the comment box below…..!!

You have chosen a very original angle to look at shunga, Darya... really fascinating! You must have a strong visual memory! Many thanks again for your efforts and expertise !

Thank you, Marijn! It's all because your posts are very inspiring!

Btw, today is his birthday. And yesterday was the day he passed away.

Thanks Darya. How appropriate that your article coincides with this! !

You're right, pictures remind of Swift's famous work, however, people always fantasized of giants and lilliputs in their myths and superstitions about people who live in other corners of the earth.

As Far As The Left Side Of Set No. 2 Is Concerned: It Looks Like They're Making A Pornographic Production Of Shakespeare's "A Midsummer's Night's Dream" For The Tokyo Stage!

‘Of This Men Shall Know Nothing‘ by Max Ernst looks theatrical, yeah (if you talk about this picture), but I tend to think there's something about alchemy in it as surrealists widely used alchemical elements in their paintings. Copulation of metals is a central act of alchemical work, the sign of the moon correlates to silver/mercury - one of the key elements or principles of the work, and the hand with strings looks like the hand of an operator ("The Hand of The Philosopher" is a frequent motif in occult engravings). The operator can pull the strings himself or, on the contrary, stay a marionette of copulating natural powers as all people. The title "‘Of This Men Shall Know Nothing" reminds us of secrecy in which medieval alchemists kept details of the Great Work. That's one of the possible interpretations.

PS Sorry, I misinterpreted your reference art first, yep, the piece by Kunitora is very Shakespearean ;)