Sensual Elements in the Lowbrow Fantasies of Todd Schorr

Somewhere between the late 1960s and the 1970s, a new artistic movement emerged from the underground scene, known for its gleeful humor, and impish or sarcastic commentaries, that would later be called the Lowbrow art movement.

The art critic Doug Harvey gives the following apt description of Lowbrow art, 'Cobbled together from a wildly diverse array of pop cultural influences, Lowbrow is a visual patois made up from the things an increasingly visually sophisticated populace actually wanted to look at: the signs and symbols that have for a century managed to stake a claim to their attention in the free market of mass media - Pop art without the question marks.'

One of its prominent members, although he is not fond of the Lowbrow label, is the American artist Todd Schorr (1954). While many of his Lowbrow colleagues emerged from the underground comix, punk, tiki culture, graffiti and hot rod cultures of the street, Schorr was a highly successful Manhattan-based professional illustrator, creating covers for Time magazine and collaborating with Bette Midler on a children's book. He went to art school in the early 70s and could have gone the Fine art route, but his choice of schools - The Philadelphia College of Art - connected him to a different tradition.

Schorr is known for his ability to synthesize not only most of the content streams at play in the Lowbrow art world - classic and underground comics, vintage advertising, science fiction, golden era Hollywood (in particular the legendary movie monsters of the 30s and 40s), children's books and pulp illustration, carnival slideshows, 50s and 60s television, hotrods, Rat Fink, tattoos, tikis, and so on - but to favorably merge these with the undervalued achievements of American illustrators, and numerous less obvious art forms from Paleolithic cave art to the pictorial surrealists such as Dali, Magritte and de Chirico.

Over the years Schorr's formal strategies have become more narrow. His images have grown increasingly cryptic, distilling the allegorical tendencies present in earlier work into a seamless, dream-like irrationality. 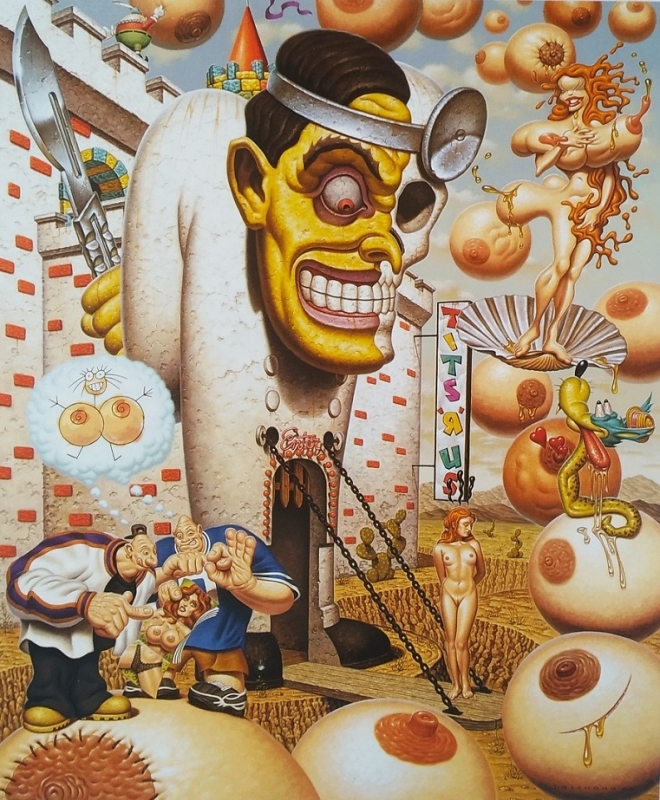 The Venus of Augmentation

Salvador Dali loved depicting breasts detached from their owners: independently minded flesh planets, with nipples orbiting like satellites. But even the Great Masturbator might have become appalled by the modern fad for silicone tits. The melting, blank-faced, hypertrophied Venus in this canvas (Fig.1) - with her liquid hair, Daliesque buttocks and elongated nipples - solicits the drool-accompanied rapt stare of Mr. Wolf Worm, while the pair of goons below are too fixated on a printed image of their dream mammaries to even look upward or notice the world they stand upon. The leering doctor who looms over the whole landscape recalls the lab-coated madmen of many a B-movie thriller of the Thirties and Forties. But whereas those deranged savants were mainly interested in grafting criminal severed hands onto innocents or arranging interspecies  brain swaps, this fellow wants only to slip gel pacs where they don't belong. 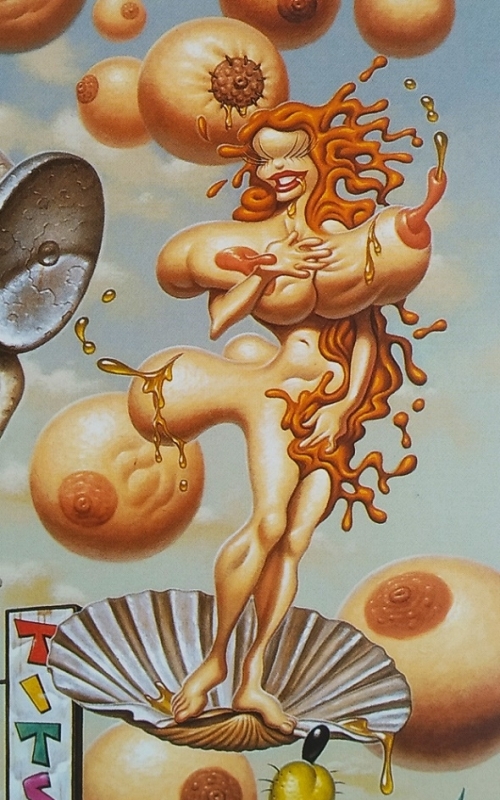 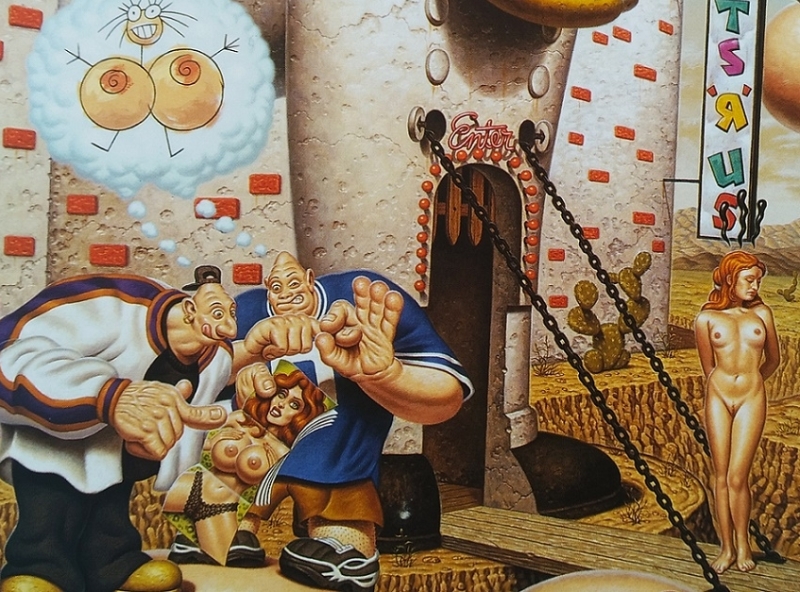 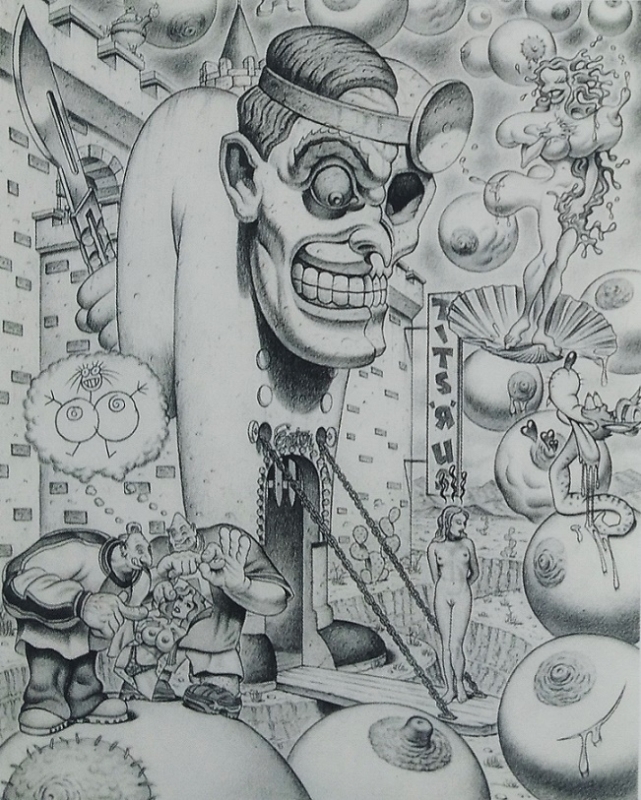 Fig.1c. Prismacolor and Graphite on Paper 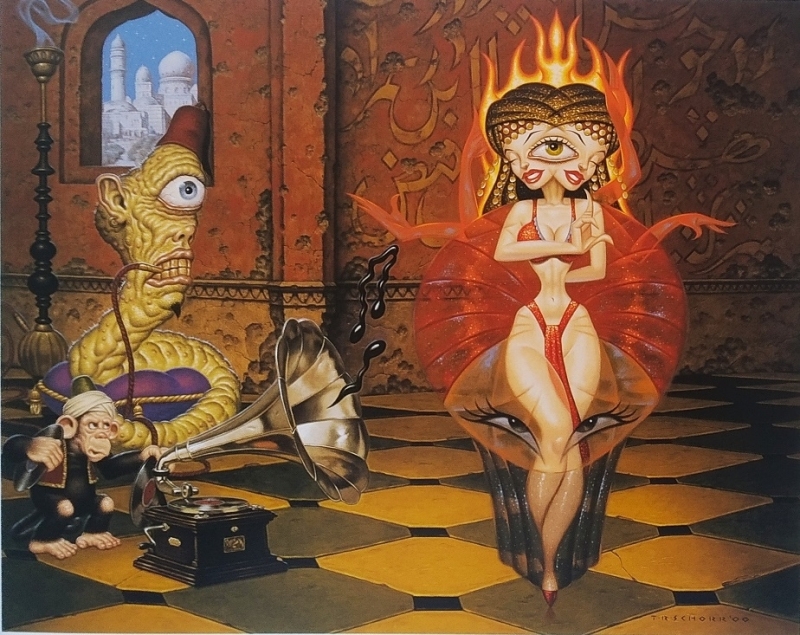 Beauty and the Beast is a perennial theme that never grows stale (Fig.2). The rough-edged, horny angularity of male yang meets the smooth, inviting curvature of female yin. Ghastly loves glamorous from the outset, while glamorous needs a little more time to appreciate ghastly's inner charms. Here the romance has progressed to the ultimate stage. The voluptuous dancer with the oddly translucent flesh and astral shroud performs sweetly and lovingly for the hypnotized man-serpent, as the chimp servant insures a steady flow of liquid notes.The affinity of watcher and watched is symbolically indicated by their shared cyclopean visages. Although the hookah-smoking man-snake might be the pasha and the flame-crowned woman the slave, in this eternal moment of performance and appreciation they are co-equal and united on the level of their souls. 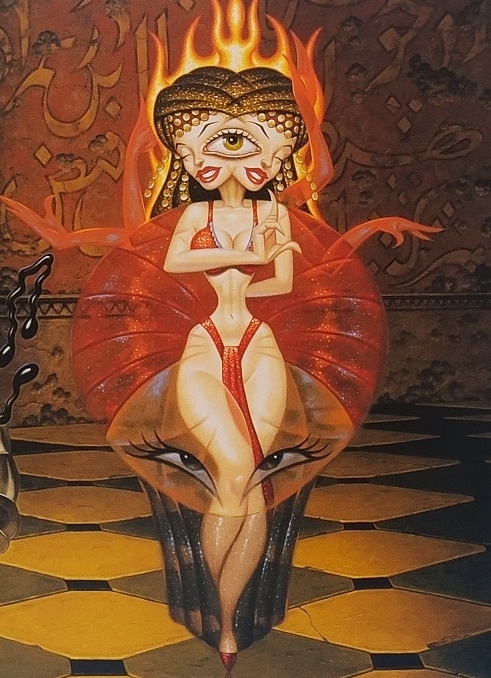 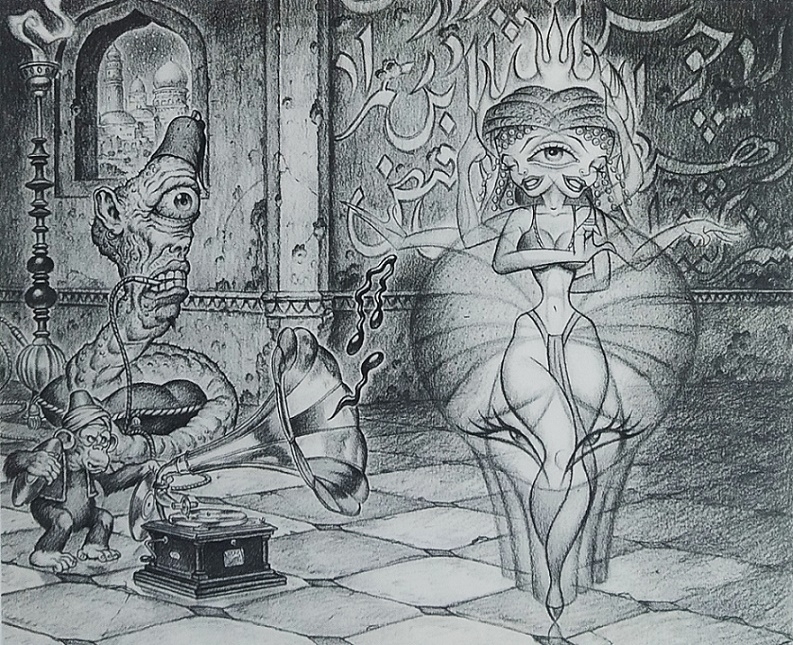 In the deluxe version of this article in our Premium section you'll find more fascinating examples  and twice as much content.

The accompanying text to the paintings comes from Todd Schorr's book Dreamland.