Hieronymous Bosch (c.1450- 9 August 1516) is undoubtedly one of the most difficult to interpret masters from around 1500. His work is known as labyrinthine, it has no clear outlines. The boundaries between authentic work, imitation and copy are partly blurred. The significance of many paintings that can be attributed to him with certainty is unclear or disputed. 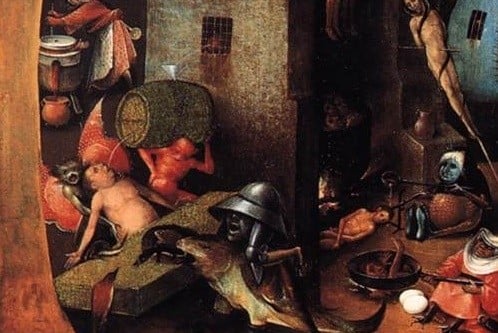 The center panel of Bosch’s triptych ‘The Last Judgment‘, depicts a nude figure, probably a woman, pissing though a window into a barrel through a funnel, and finally a naked fat man is drinking the liquid which comes out of the barrel (Fig.1). Transfigured in the style of the era, a naked man drinking the pee of a naked female is one of the favorite subjects of modern-day pornography. The right panel of this triptych shows a naked man, pierced right through by a sword, with the beak of a bird riveted in his anus, like a modern-day dildo (Fig.2). 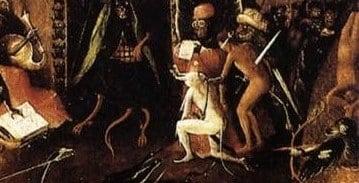 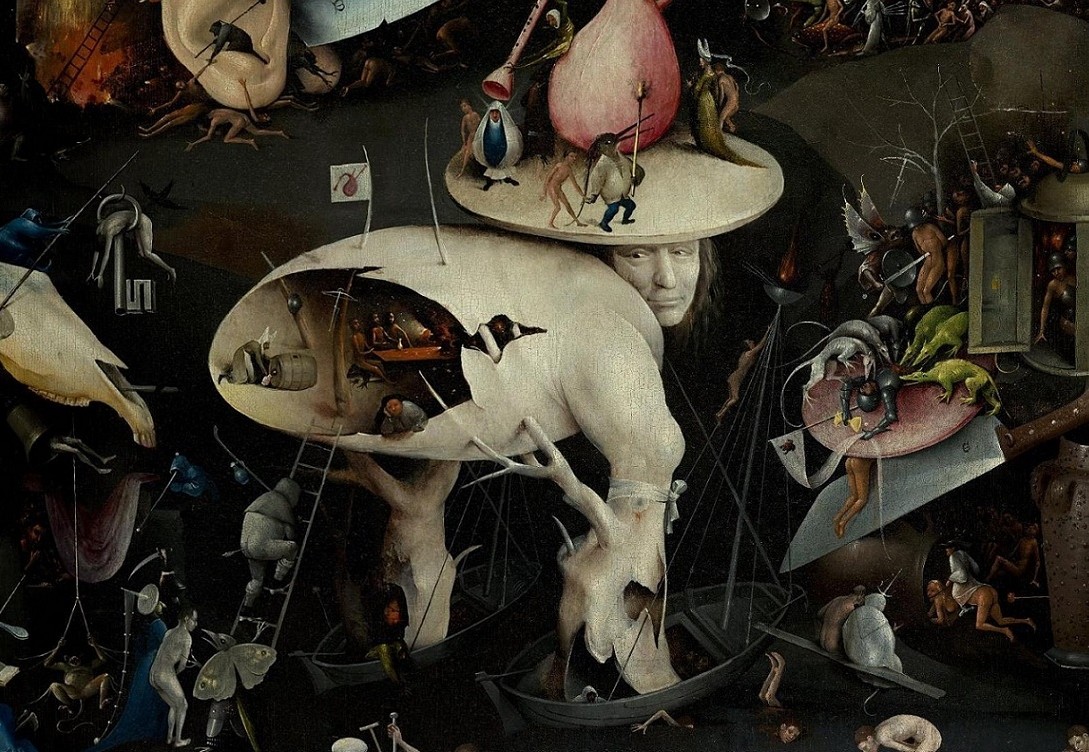 Fig.3. Detail of the central panel of the triptych entitled ‘The Last Judgement‘ by Hieronymous Bosch (c.1465-1516)

The central panel of this triptych depicts sins (Fig.3). Its central figure, the so-called ‘tree man’, represents a tavern with the bagpipe, a symbol of debauchery and the male genitalia.

In ‘The Garden of Earthly Delights‘, there is another naked man with, this time, a bunch of flowers stuck in his anus (Fig.3). In the same painting, one can see the lower half of a naked male body. Shame plays a role here as the man is hiding his erection with both hands (Fig.4). 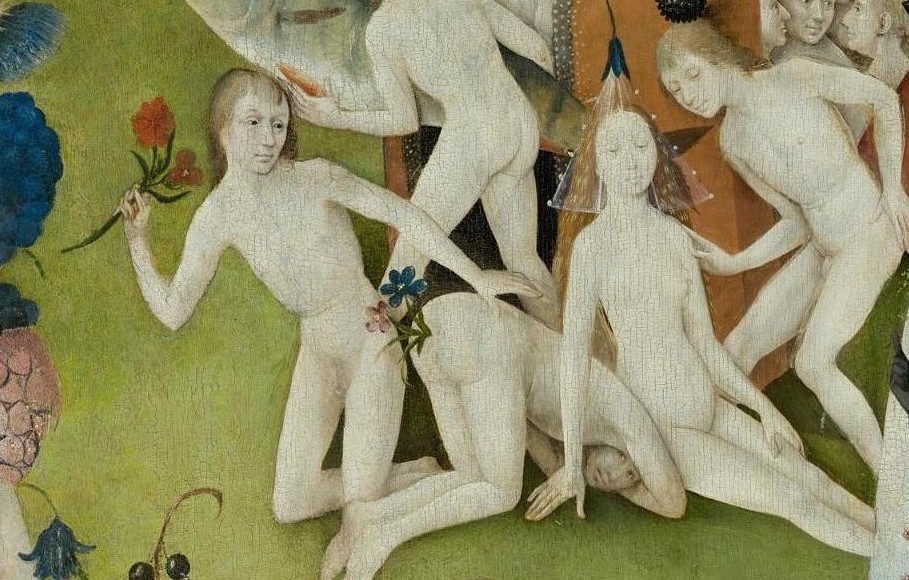 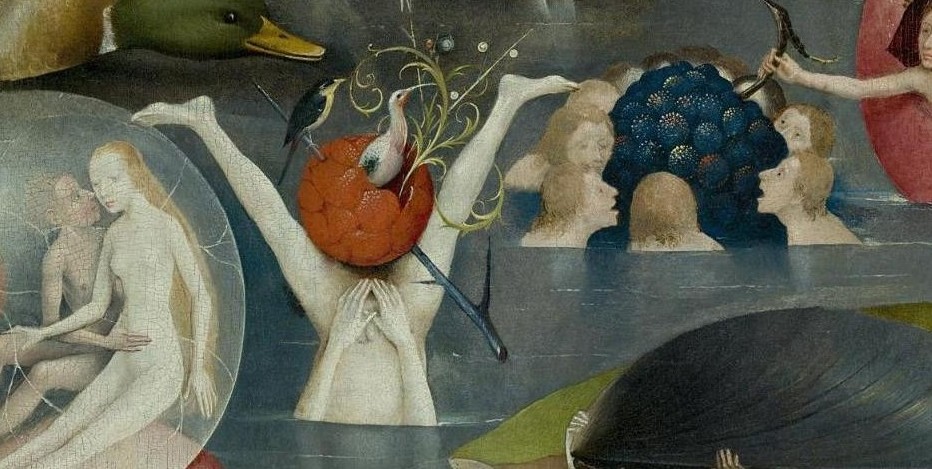 On the right panel of his pièce de résistance ,’The Temptation of St Antony‘, Bosch displays the usual temptations in the form of sensual seductions. One can see a hand on the private parts of a naked woman (Fig.5), but the owner of this hand is hidden behind a tree (Fig.6)!  According to Wikipedia the naked woman symbolizes luxury. Her seductive body is being presented to the holy person, who is depicted at right, deliberating while he glances at us simultaneously. The armless dwarf next to him, sporting a red mantle and using a walking frame, symbolizes humanity’s slothfulness.

The last temptations are depicted in the foreground. The table with bread and a jar of vine, supported by naked demons symbolizes gluttony. The standing human pillar has his foot caught in a jar — an allusion to the sexual intercourse. 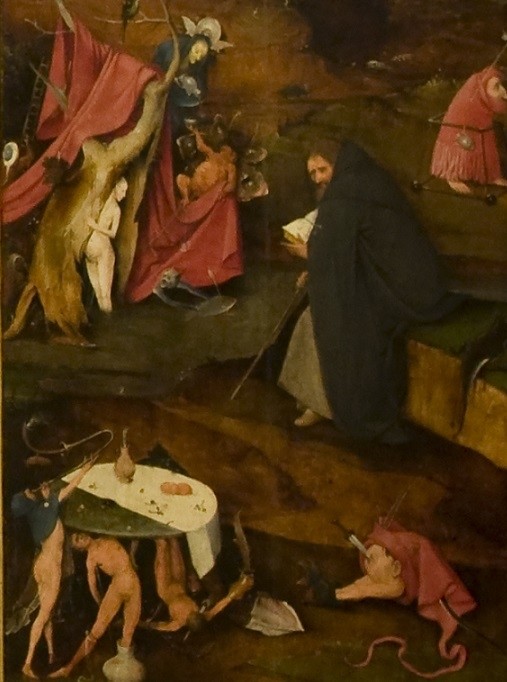 Fig.6. Detail of the right panel of the triptych entitled ‘The Temptation of St Anthony‘ (c.1501) 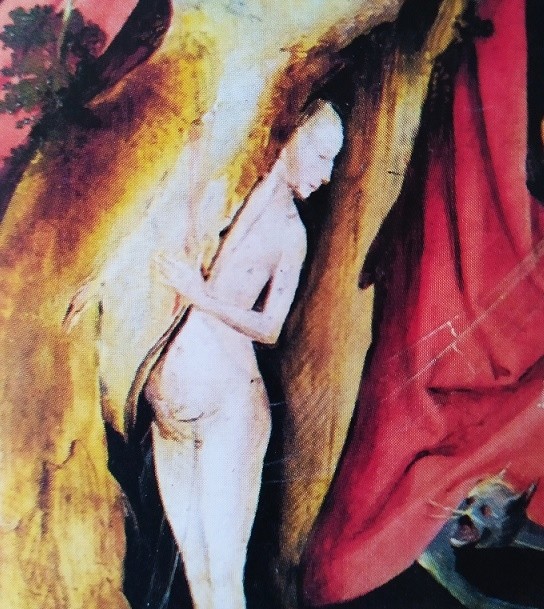 Fig.7. Close-up of the nude woman in the tree from the triptych ‘The Temptation of St Antony‘ (c.1501) 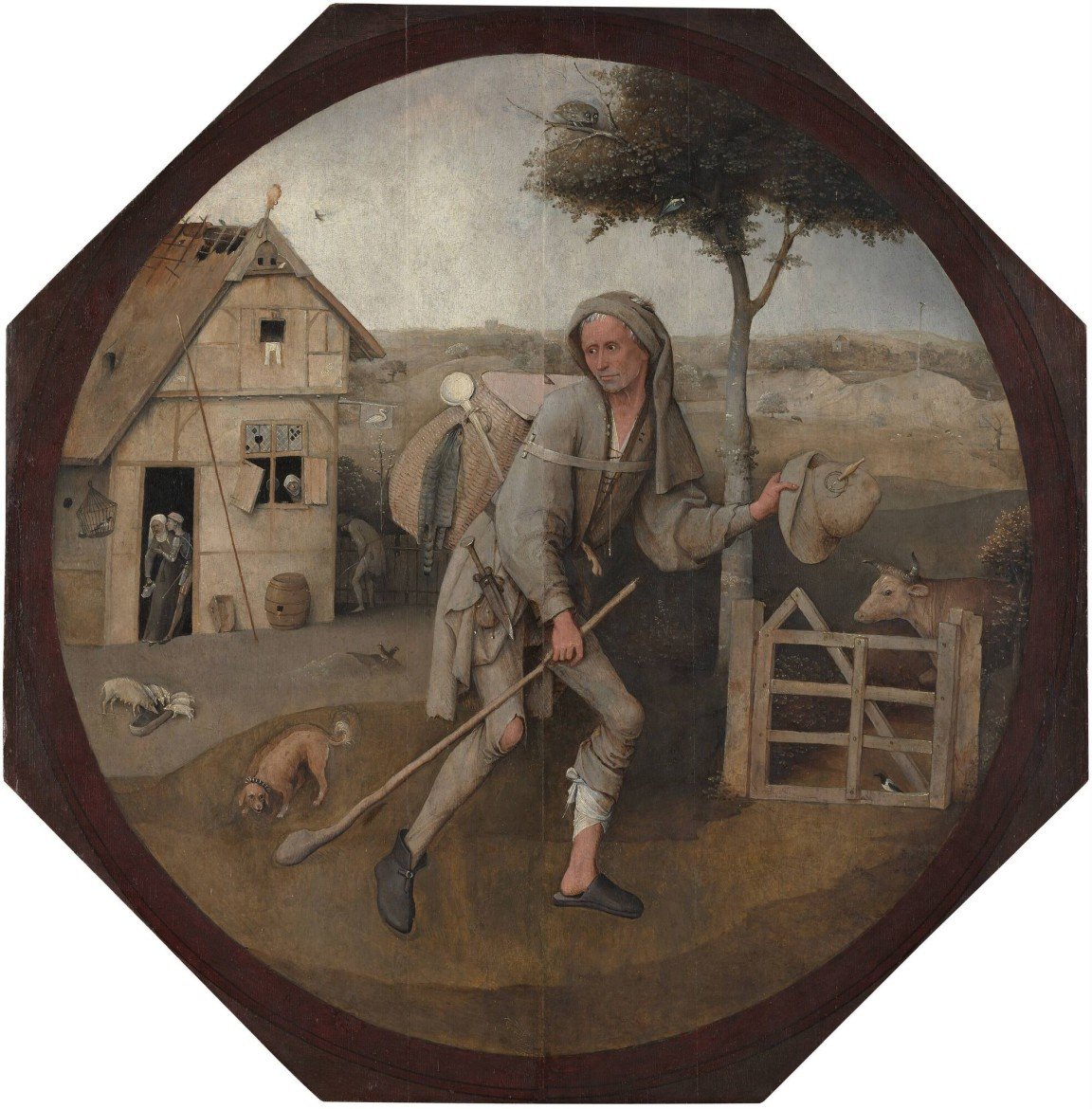 In ‘The Wayfarer‘, a slender man sporting grey clothes is strolling, holding his hat in his left hand (Fig.7). He is holding a cane in his right hand warding off an agitated dog. On his back he is carrying a large basket with his “household goods” in it. These kind of baskets were commonly used by peddlers in the 16th century in the Netherlands. To the left a tavern (and probably also a brothel).

The contemporary artist whose work strongly recalls Bosch is the German surrealist Michael Hutter. Click here for an article about him or here for an interview!

Thanks Philip. Yes, maybe there is also a hidden visual dialogue between that spoon and the spoon attached to the peddler's basket.

Always had a special love for Hieronymous Bosch's work. Always saw it as a very intelligent attack on religious hypocrisy. Human frailty trying to sort through the labyrinth of life. Which paths lead to Heaven? Which to hell? The inclusion of saints and monks and other religious figures have purpose? Are they there because they are part of the world, or is there a subliminal intention, a sort of cynical bow to the religious power, a request for permission to depict such "vile" scenes as depictions of hell, the hell we all share? Are these religious personages warning the common folk, or partaking of, and delighting in, the same sins? Are they meditating, horrified, or lusting after the bare, free yet trapped bodies of the common mortals, the life they want to leave behind, but cannot? The blind lead the blind. Pain inflicted is pain received?, a reflection of pain feared?, the eternal pits of fire and brimstone, the promise of hell and eternal damnation are there, inviting us to jump in, like if in a bathhouse. Hieronymous Bosch realized that there is no escaping humanity, with all its contradictions. Shunga is right there, standing side-by-side with it, with depictions of demons and imagination defying supernatural creatures that portray fear of the unknown, and the desire to understand it. What's sex and copulation all about? Reproduction? Sharing? Togetherness? Belonging? Liberation? Enjoyment? Domination? Subjugation? All of these. And avoidance of loneliness too? Bosch had most likely no answers, heaven and hell were as are and will always be out of reach. He was in a way clueless. He had questions but no answers, like no one has, but his questions, his wanderings and wonderings were unique in form and daring for the time.

Thanks JB. Nice analysis. You're absolutely right, all great art evokes more questions than it provides answers. Yes, shunga and in particular an artist like Kawanabe Kyosai seemed to enter the same universe as Bosch.