Visceral Portrayal of Sex and Violence by Ronald Ophuis

"In all of us, even in good men, there is a lawless wild-beast nature, which peers out in sleep". This quotation by the Greek philosopher Socrates especially applies to the work of the Dutch painter Ronald Ophuis (1968, The Netherlands, Hengelo). His large canvases (sometimes even 8ft. x 17ft.) portray disturbing images of sex and violence in a gloomy scenery that makes a penetrating and lasting impression on the viewer. 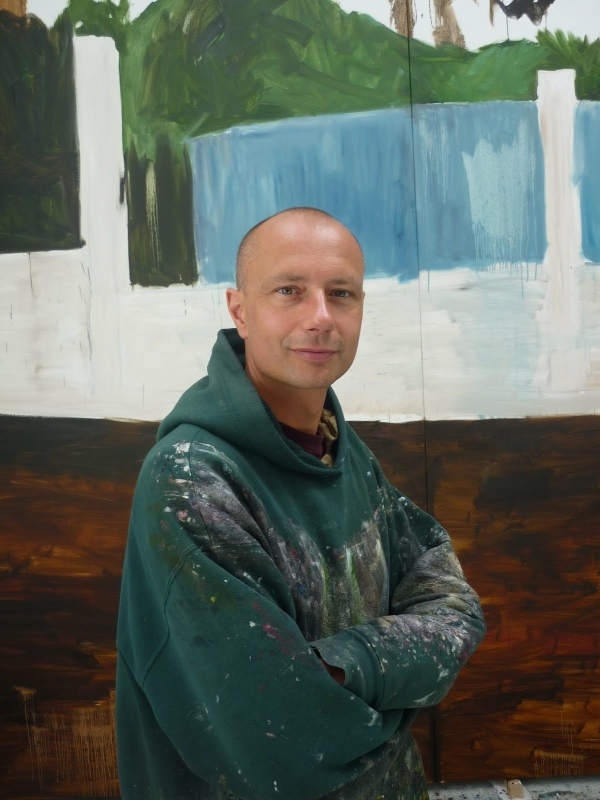 Fig.1. Ronald Ophuis in his studio

Ronald Ophuis grew up in Hengelo (in the Eastern part of the Netherlands). Although he drew from an early age he had no specific ideas about it. The great eye opener about being an artist came after seeing a documentary on the painter and sculptor Markus Lüpertz (1941, Germany, Reichenberg). Ophuis studied at the Rietveld Academy in Amsterdam and the Academy of Visual Arts in Enschede. A major influence on his painting style became Lucian Freud (Fig.2) like him he uses tertiary colors and with the figures portrayed in an aggressive realistic manner. 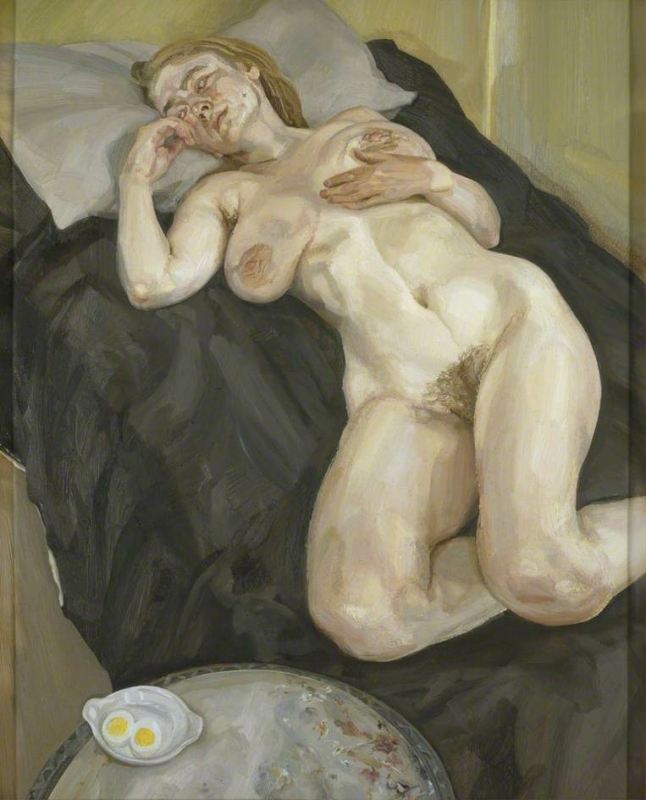 Ophuis was 3 years old when his younger brother died at the age of 6 months. When he grew older he unconsciously developed images in his head concerning his brother's death so that he could empathize with his parents. He recalls that the fascinating aspect was that he believed the images were truthful although his father thirty years later told him these images (memories) weren't true. This fascination would become a starting point for his work as an artist. 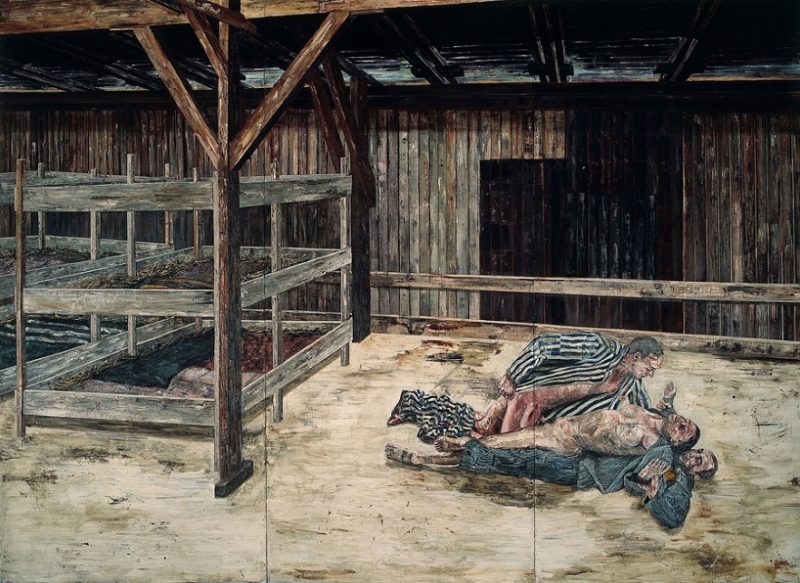 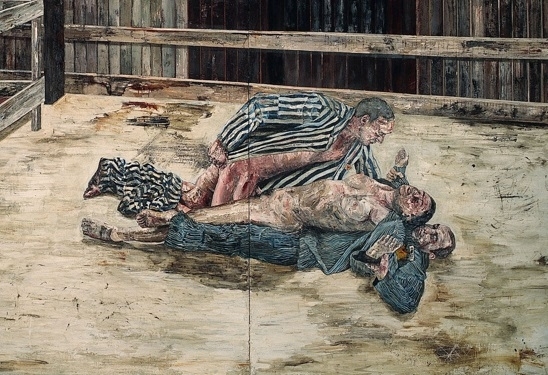 Ronald Ophuis' work has a very dramatic content but they are painted in an 'unsentimental' way. He is both intrigued by emphathizing with the victim as well as with the perpetrator and therefore the moral responsibility is difficult to abdicate. Due to the subversive quality of his work there has been a lot of controversy. One of his paintings called Padvinders (Boy Scouts) depicts a boy scout who is raped by other scouts.

The work was purchased by the municipality of Enschede which led to strong reactions from the locals and the local scouting association. Ophuis reaction was that he also had these emotions and therefore created this specific work. He explains: "If you decide to become an artist you have the motivation to make things and then this kind of issues can arise. It's exciting and challenging to explore these thoughts in your head". 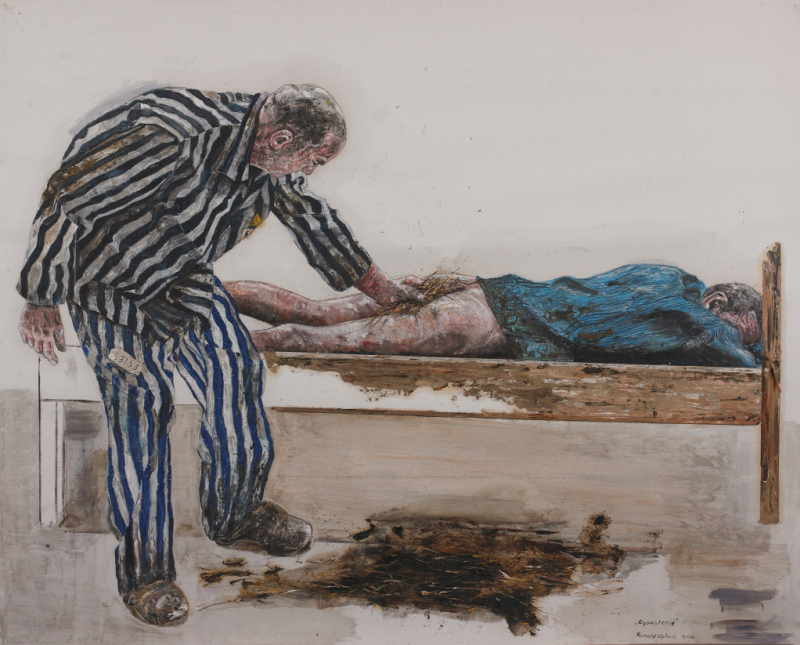 In terms of subject and motif, Ophuis considers his paintings depicting the rape in a concentration camp (Fig.3 and 6) very successful, because here everything that should create a kind of balance in our world is turned upside down. In our experience, the Nazis are the absolute bad guys and the people in the camp are the victims, and therefore holy. He means that you should always be on your guard and can hardly trust anyone. 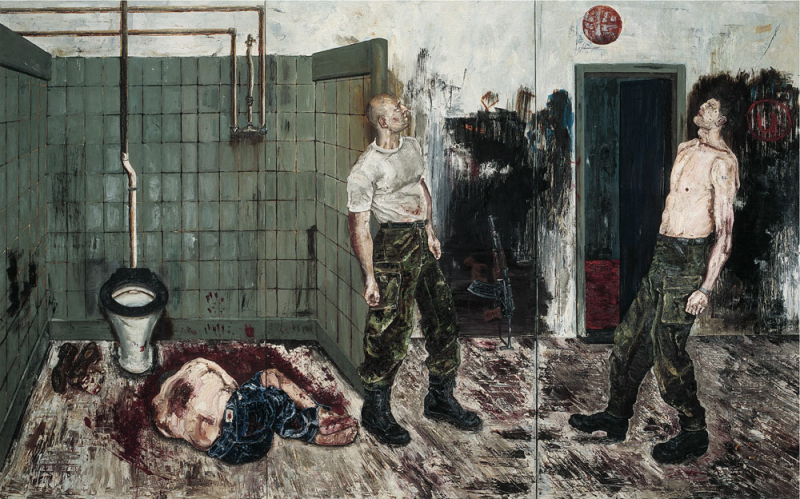 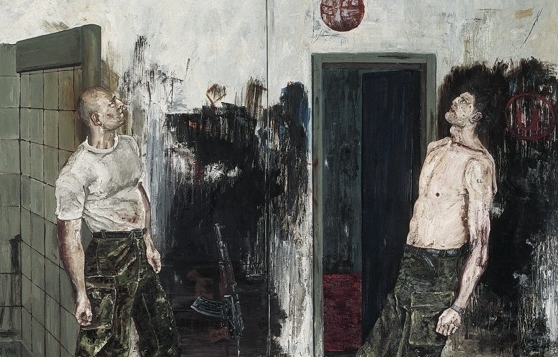 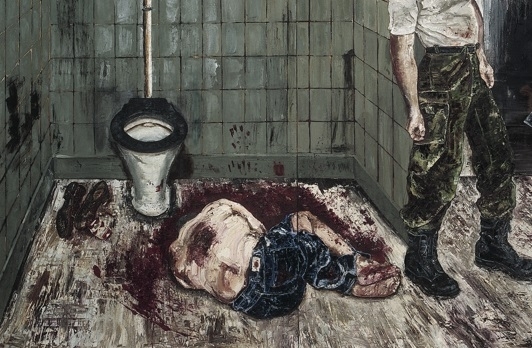 By depicting topics we do not like to be confronted with and that are beyond our comprehension, he wants to portray "evil". That's why he sometimes calls himself "the messenger of bad news", with the emotional value of his work as close as possible to the experience of fear, loneliness and pain. 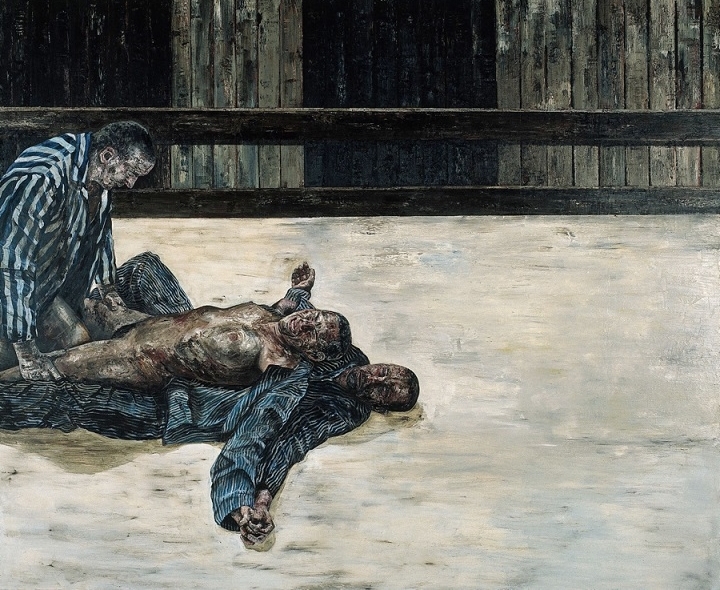 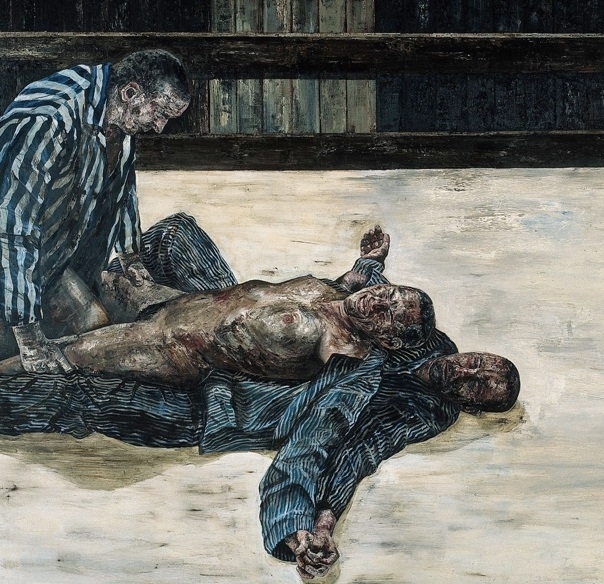 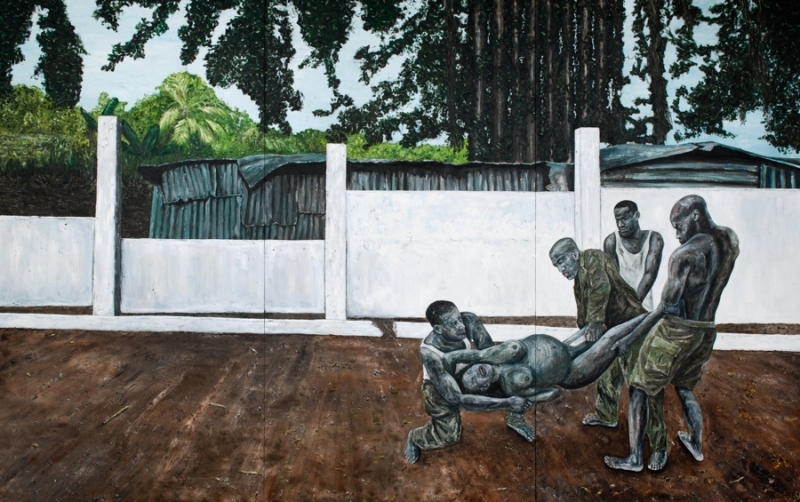 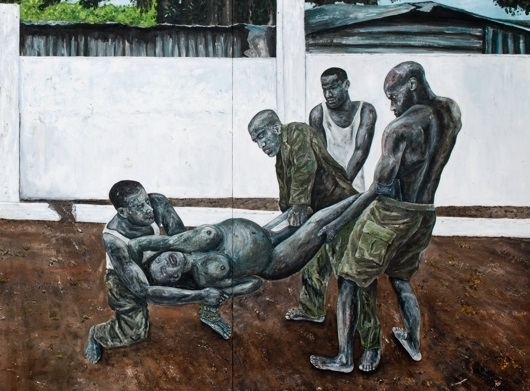 Ophuis doesn't work within a defined moral code because then the mind remains within a protected area and the impact of the work disappears. Dealing with violence and sexuality within art increases the possibility of identification. Even when these fantasies are not present in the viewer he will have a visceral reaction difficult to ignore. Besides this a painting demands more time, when it affects you, you will read it longer. By adding a physicality to the skin Ophuis hopes to accomplish a....

Continue reading in Premium and discover, among other things, more about his special way of working, more shocking works including his best known painting involving football players and a Coca-Cola bottle, the disturbing sexual acts of a young couple on a riverbank, an oppressive miscarriage scene, his fascination with Africa, why the artist sometimes feels like Shakespeare during his work, and much more...

Let us know your thoughts about Ophuis' controversial work in the comment box below...!!

This was not nice! Sex is a beautifull act and sceen! The violence does not belong there. I understand and enjoy bondage and small sadomasochism even pain, if it leads to satisfaction. But all this has to event in a mutual agreement. Then it is ok.

Thanks KSa. The intention of the artist is not to sexually arouse the viewer but to take him/her to place of discomfort. The subjects he chooses are confrontational and depicted in such a way as to challenge the viewer to take a stand.

I love artists who transgress the norms of what is morally worthy of being represented. It's almost a fact: people forget that painting is nothing more than a representation, a fiction. Giving a moral function to art is to censor it.

Thanks Alexandre, I agree. For me, great art challenges our perception and Ophuis does so, in both his provocative choice of subject and use of the medium. I think that you should indeed be careful with defining radical aesthetic frameworks for art, because then you quickly end up on the reprehensible path of Entartete Kunst (Degenerate Art).