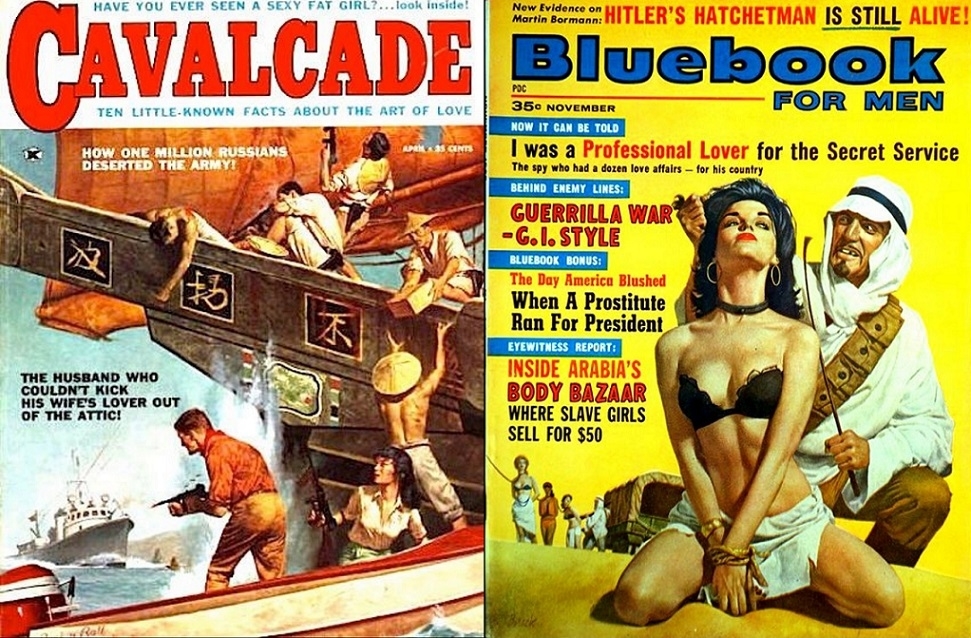 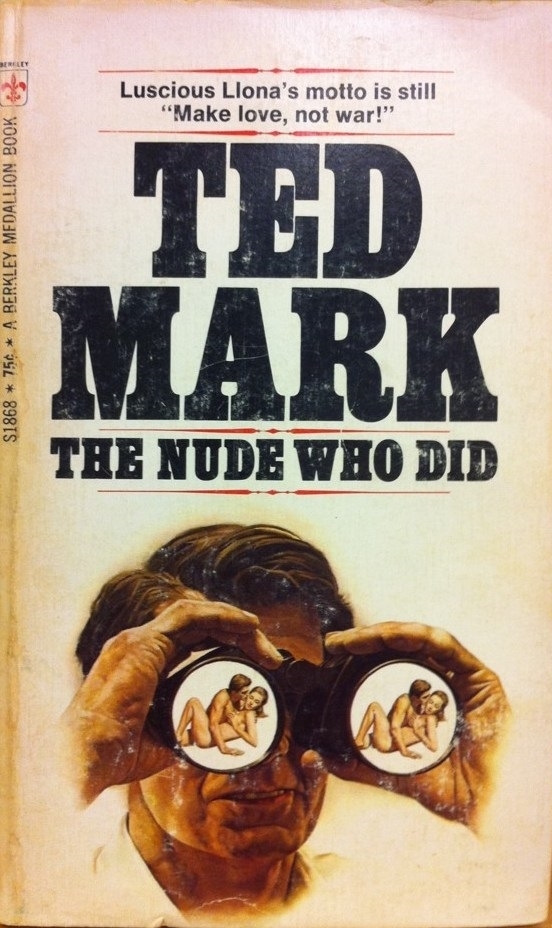 This book is a part of a series about the adventures of a “professional nudist” Llona Mayper, who “is sunbathing on the roof to distract local Air Force pilots.” Books were issued from 1967 to 1976. This one reads about Llona’s revenge on her unfaithful husband, so making love, she actually makes war.

12. Fondle With Care By Jay Martin 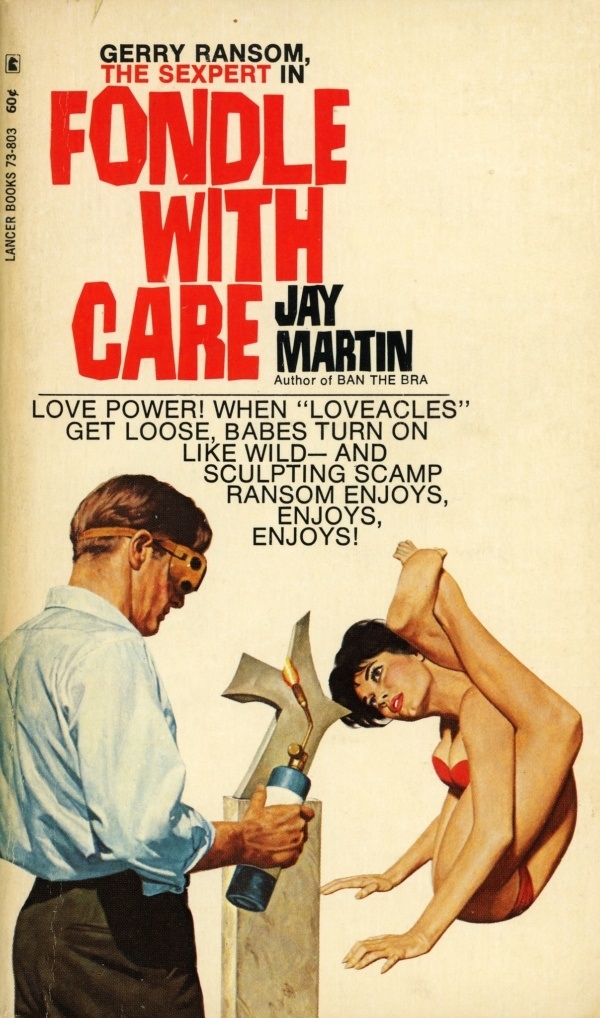 Jay Martin was an alias of the freelance writer Morton Golding who produced mass-market novels with titles like Bitter Harvest. The book Fondle With Care is from the series about Gerry Ransom, a man of art and a lover of women. Ransom is rather a pretender than a true artist. He claims himself as a minimalist sculptor. A man-sized sculpture of an exclamation point would be his opus magnum if Ransom figured out how to fix the stroke above the dot. With his reputation as an artist, the handsome and glib-tongued man never misses an opportunity to have a sex affair. But for what he has a real talent is for being in the wrong place at the wrong time. 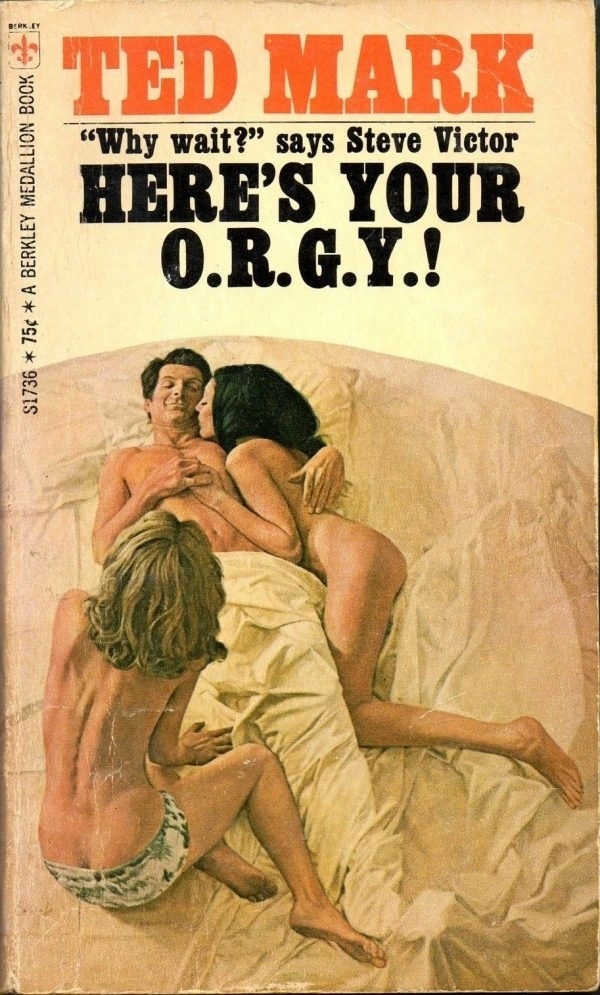 The 11th place is occupied by another Ted Mark series about the Organization for the Rational Guidance of Youth (O.R.G.Y), which is loved by the readers, according to comment sections of book stores and blogs. As the author wrote in the introduction, “It’s a one-man operation devoted to sex research with ‘guidance’ actually a secondary function – which I admit, hasn’t ever really been exercised. I see myself as carrying on the traditions of Dr. Kinsey. The difference is that I’ve cut out the paperwork and substituted a personalized methodology” (killercoversoftheweek.blogspot.com). This book is devoted to one episode from the work routine of O.R.G.Y. agent Steve Victor, whose mission now is to convey five girls to Sheikh Ali Khat.

10. The Thrill Makers By Brad Hart 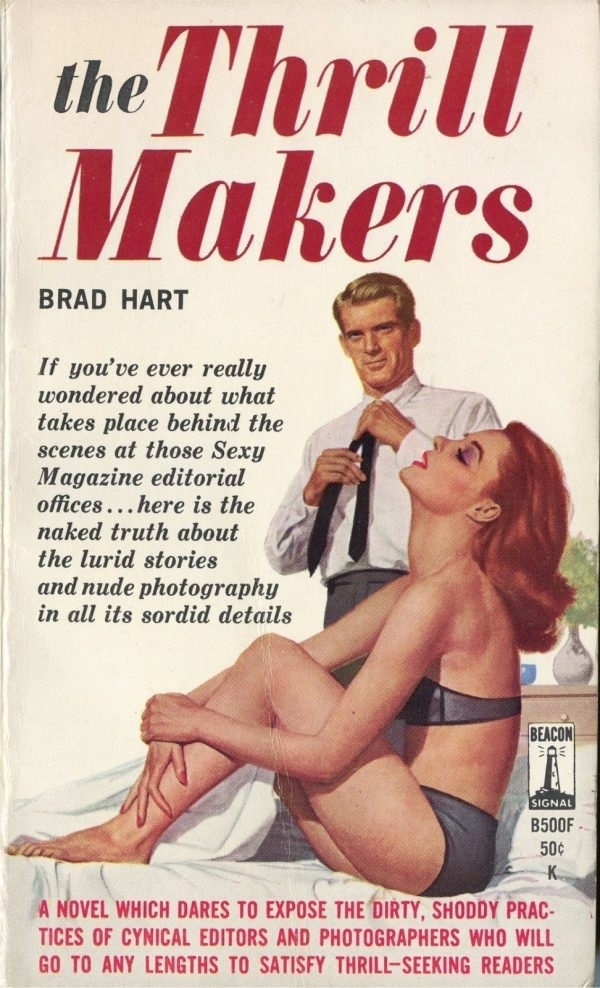 The book with an elegant Borack’s cover promises to give us an excursion to the behind-the-scenes world of popular magazines, namely, Satyrus magazine, selling 2 million copies per month. The content of press of this kind must be provocative and teasing. Brad Hart shows to a reader little dirty secrets of Satyrus‘ editors. As we all know, the slogan is simple: sex sells!

9. This Nude For Hire By Ted Mark 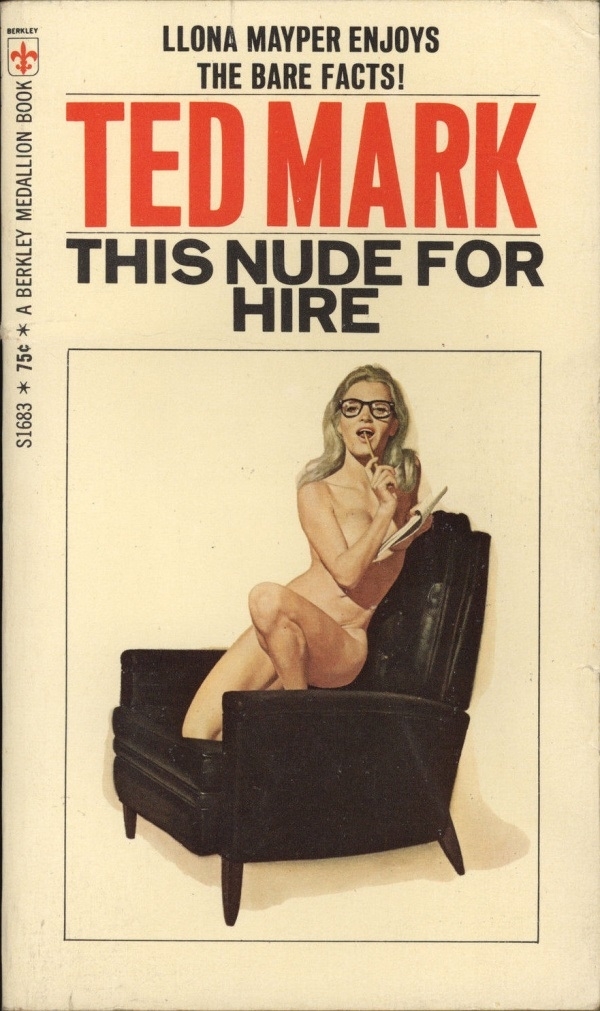 Hey, Llona Mayper, we see you again! This novel precedes the one we discussed in the 13th place. This time the heroine, who’s seeking a job to make ends meet, comes to the office of the Nymph magazine to work at the reception. The employee has lots of tasks to do and may be asked to get undressed while performing some of them. We don’t know what Satyrus magazine has on offer but, judging by the cover of this Ted Mark’s book, Nymph magazine has a stronger cast! 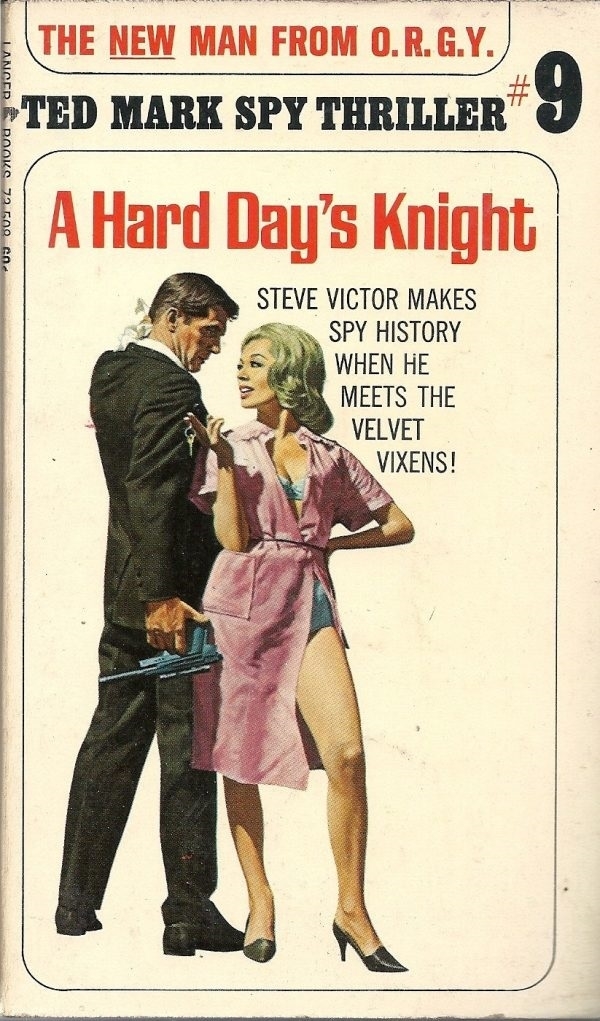 Some people recall times when they shoplifted his books in local stores as teens. Looking at the cover of another novel about Steve Victor, we must admit that, owing to Stanley Borack, this fancy man with a gun probably would make us shoplifters too! 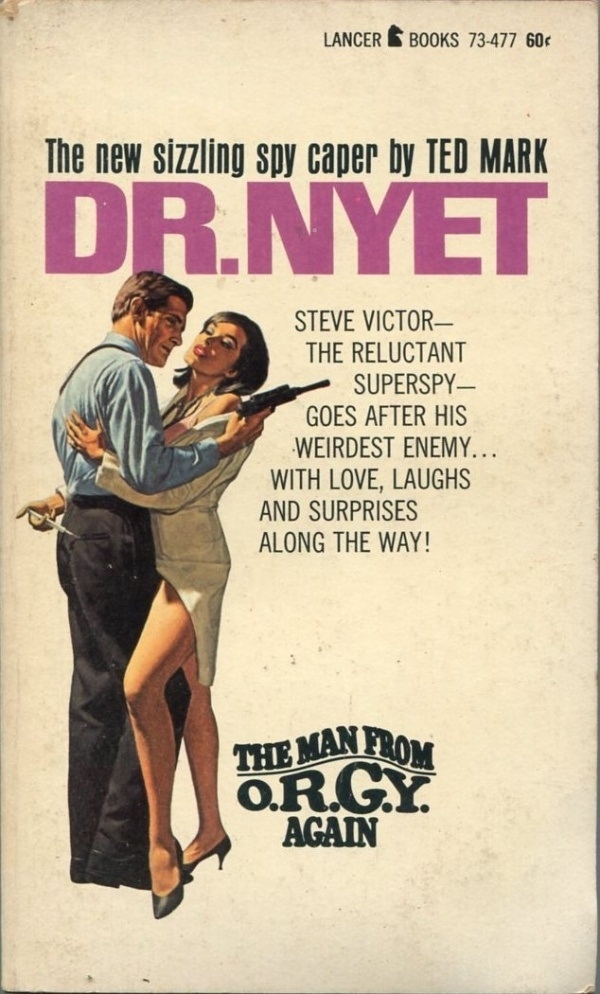 As in the case with lesbians from the first part of our top, here we move from more “dressed” covers to less dressed ones. Now the main villain is an evil doctor. Steve Victor is armed with his gun and malicious syren dr. Nyet with a syringe, plus there’s always a lascivious cupid to interfere… Whose weapon will win?

6. My Son, The Double Agent By Ted Mark 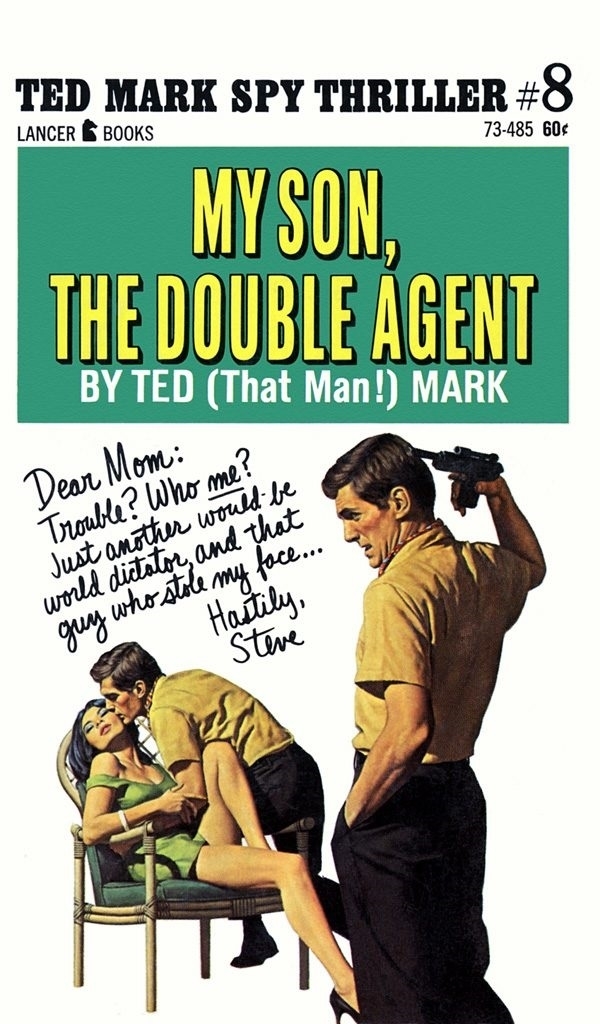 “And that guy who stole my face…” If John Woo had read this novel back in the 1990s, there would have been another Face/Off version, probably even more fitting such overacting but still iconic performers as Travolta and Cage.

5. Her Tennis Coach Taught Her How to Swing and Serve His Balls by Tye Breaker 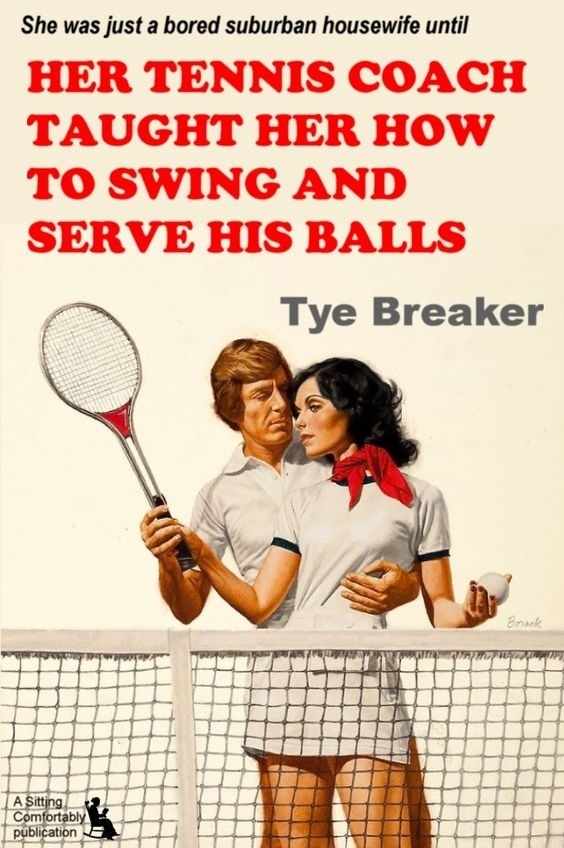 Yeah, we haven’t found an actual book with these gorgeous tennis players on the cover, but it surely exists. Instead, we’ve come across this hilarious parody. Though, if there really were a paperback novel with a title like this, we wouldn’t be surprised.

4. The Dreamers By J. Bigelow Clark 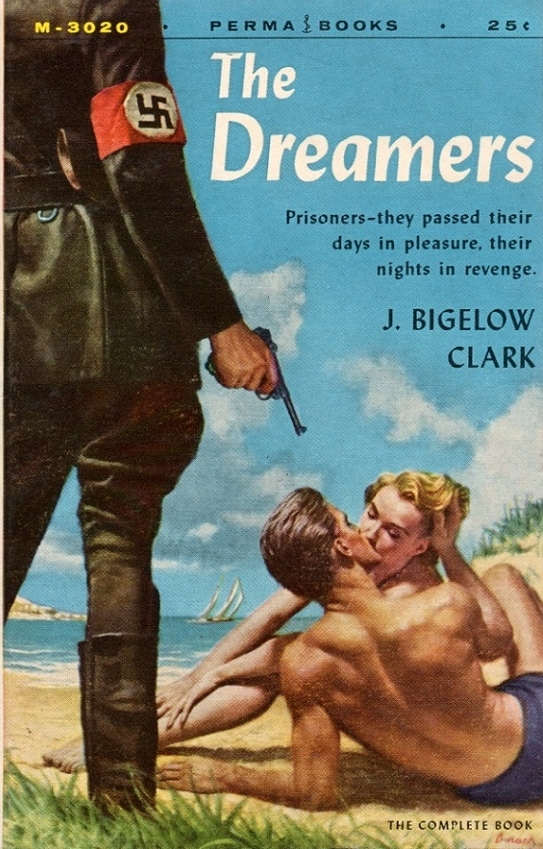 Though we don’t like Nazis (that’s why we didn’t place this cover in the final top-3), the combination of elements is brilliant, we mean, it makes you wonder what the hell is going on here?.. The plot is rather simple: two Englishmen, two Americans, an Italian-born Lydia with her daughter, and a German baron von Orsted who loves this woman flee their countries and stay on an island rock in the Mediterranean. After Nazies, led by perverted captain Muller, have occupied the place, the baron tries his best to send Lydia off the island, while Muller makes sodomy advances to him… So there’s a sex triangle on the cover, and the main point is not a woman as you may think, but a man! Nazist carnage on the island (people except for Lydia and the baron get killed) alternated with the Mediterranean passion, Eros and Thanatos in one book with such an epic art by Stanley Borack – this book was destined to be a bestseller!
And now… let’s look at our top 3 of Stanley Borack covers! 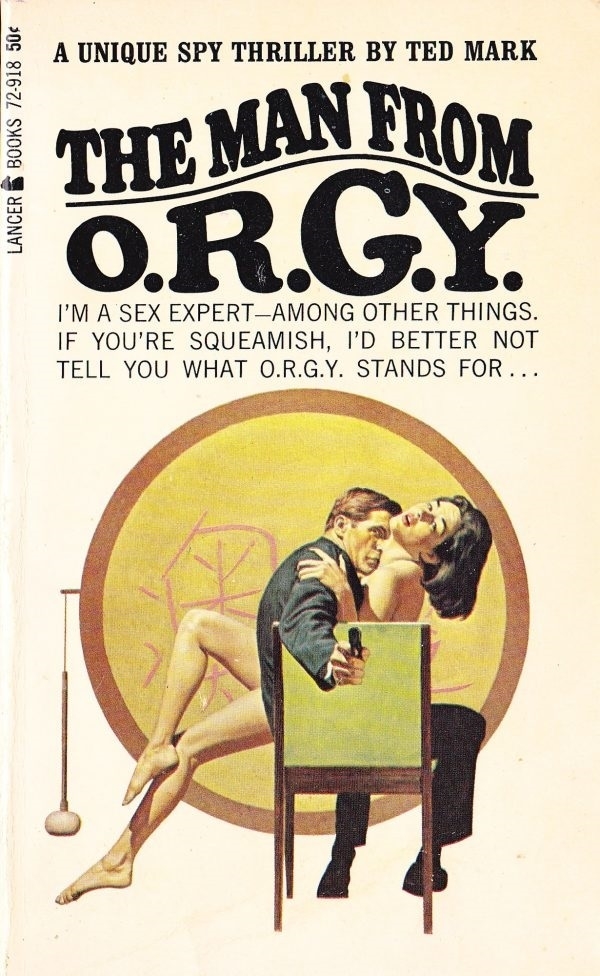 The bronze place is occupied by another O.R.G.Y book telling us about our fellow Steve Victor, who spies for the USA, using his cover of sex practices’ researcher. Nuclear weapons, nude women – all fine and familiar cliches are present. Some enterprising commentators on book platforms share their simple lifehacks: Ted Mark’s books may be profitable if you buy them at a low price to sell on eBay as collectibles. Nostalgia can be a strong feeling, but who on Earth would buy the whole collection (I bet it can be an admirer of Borack’s art, look at this gong and the gun that points at you!)

2. Ban the Bra By Jay Martin 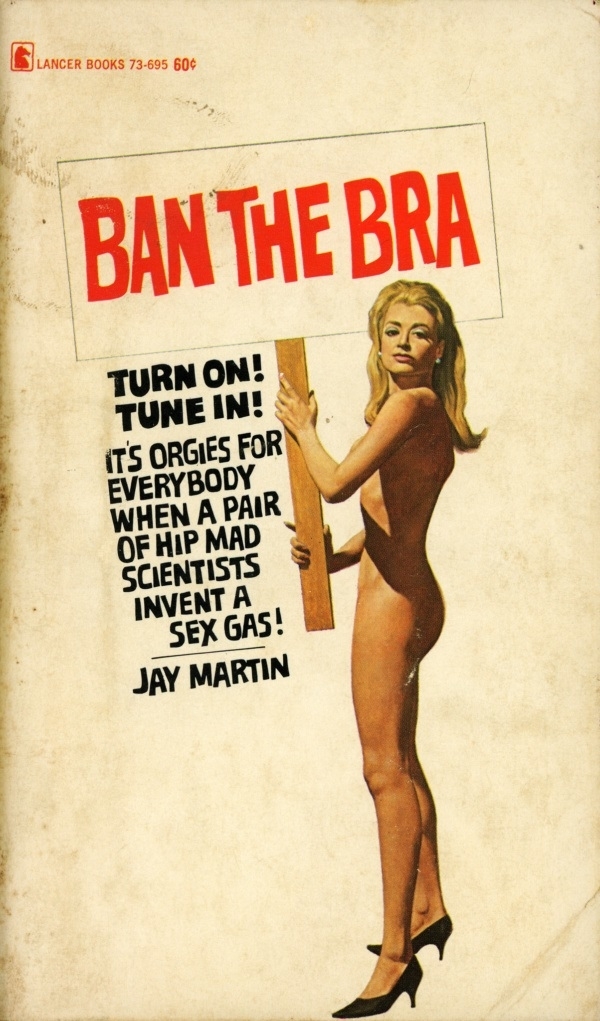 The silver place we bestow to the cover of another Jay Martin’s novel. If we gathered here for the sake of the 1960s, what can be more specific for this time than protests against any forms of control and pressure (e. g. beauty standards), including the no-bra movement with trash cans for bras on the streets?.. The plot is two mad scientists inventing a gas that makes every person inhaling it go crazy about sex. Peddling it to an enemy country, America can put into action the famous hippie slogan. The story may remind you of Milo Manara’s Click series, which appeared in the 1980s.

1. The Erotica Caper By Jay Martin 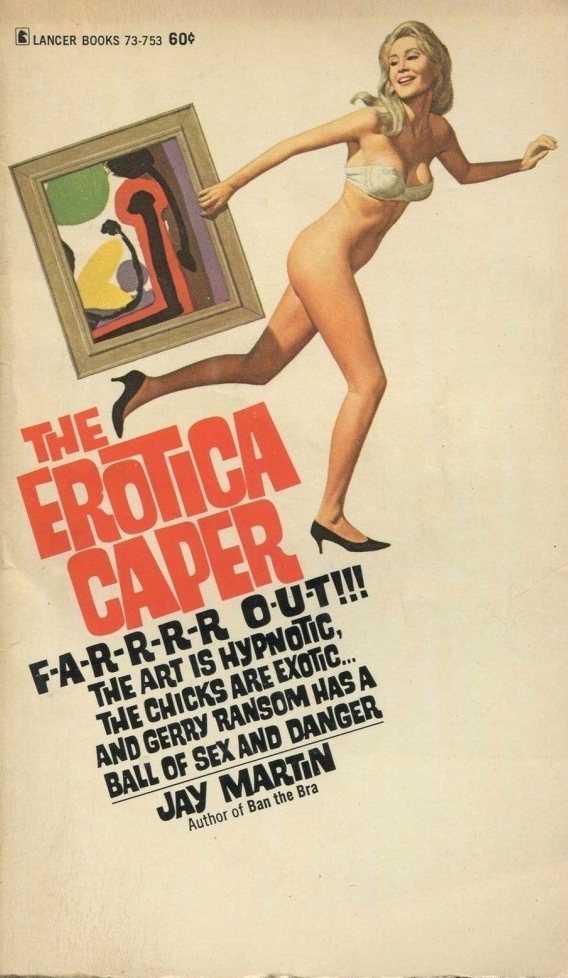 What is your favorite out of all 26 covers? Leave your reaction in the comment box below….!!

Irina and Eva Ionesco: The Story of The Hype and Hypocrisy
25 maart 2022

My compliments for the two articles on this illustrator/designer of pulp literature. About others (no less famous) a book has been published with the title Young Lusty Sluts van Michael R. Goss. Lots of information to be found in that one.

Thank you for the feedback and additional info! Don't know why but Borack's works evoke fake nostalgia in my mind :)