The following images are all the illustrated pages are from the book series ‘Shunshoku Irifune nikki’, issued around 1840, designed by Utagawa Kunimori II (act. ca.1830–1861). 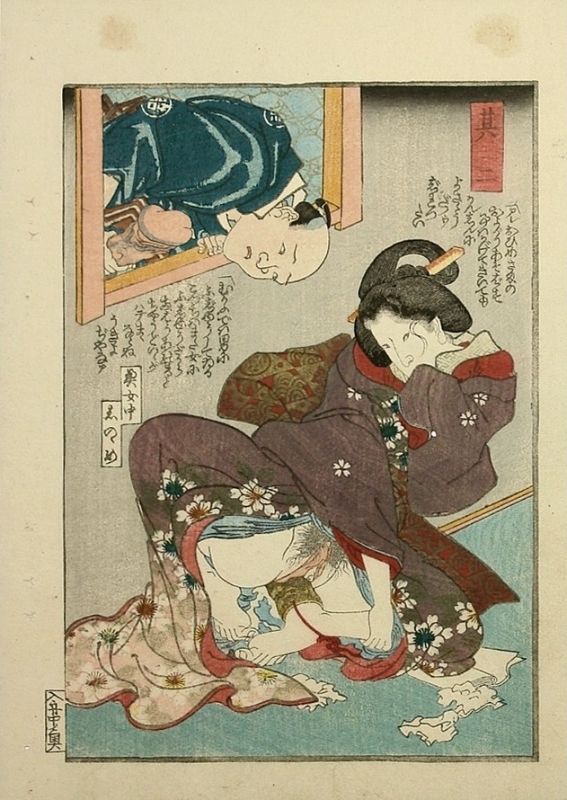 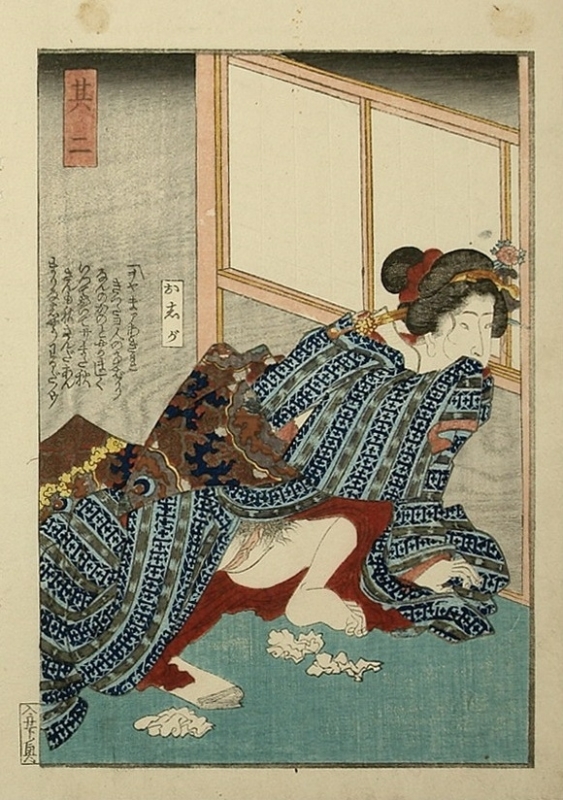 A very passionate courtesan (look at the tissues surrounding her!) follows the sensual activities that take place in the other room.

A lovely bird’s-eye view of the interior of a brothel showing several activities inside the rooms. 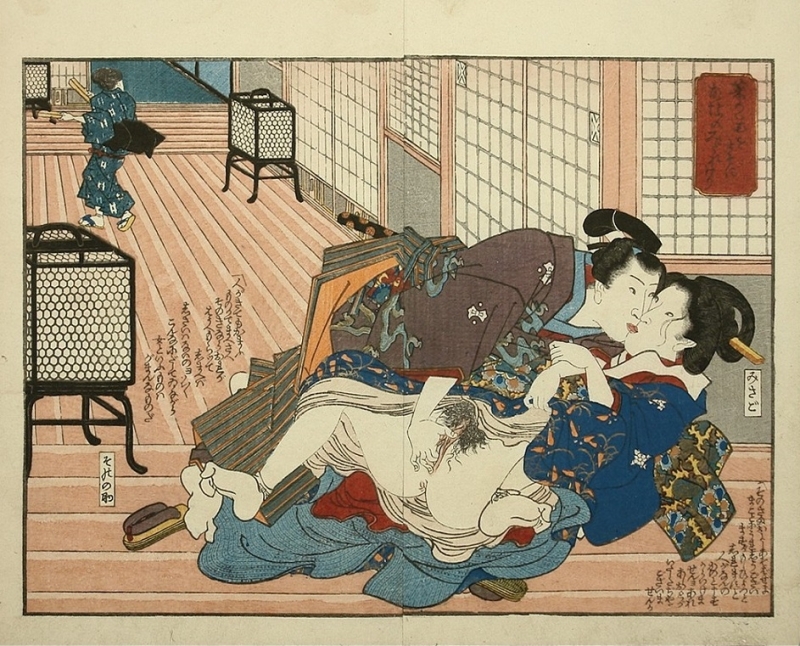 In the hallway of a brothel a young impatient samurai is making advances to a young courtesan. The design is depicted in perspective and in the background we can see a female servant checking on the lights. 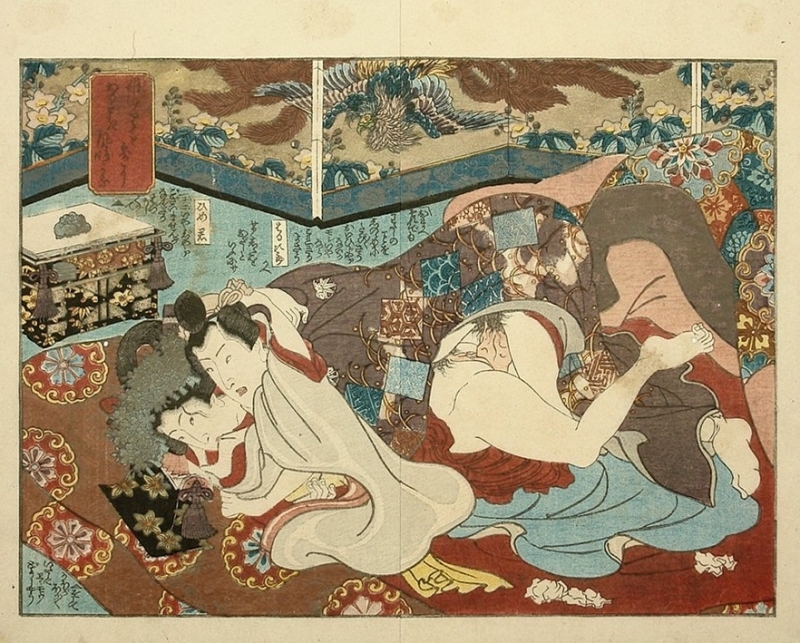 In a colorful setting we see a wealthy couple making love while still wearing their luxurious clothes. The folding screen in the background features a phoenix with spread wings. 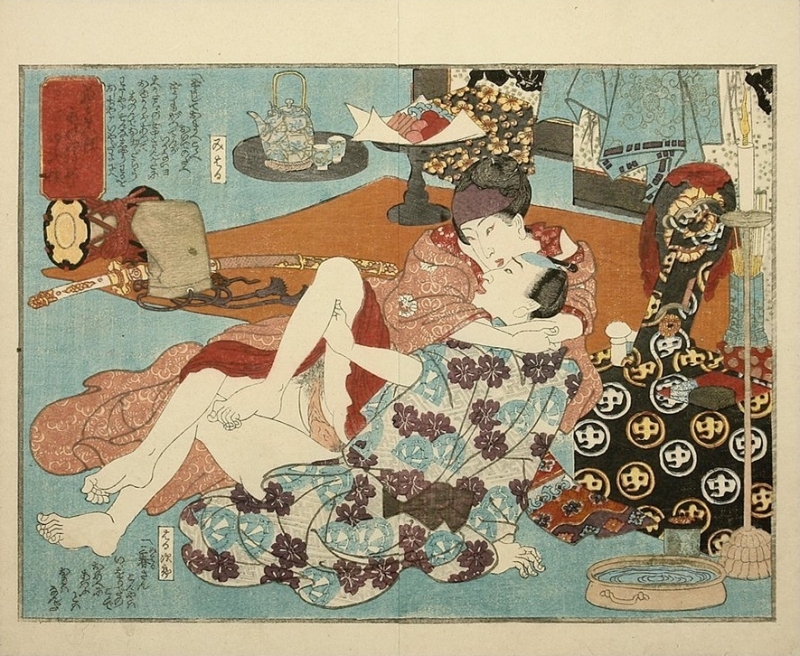 A very rare scene depicting a female as a wakashu (literally "young-man style") kabuki, normally only concerned young men. While the woman was taking off her make-up she has been convinced to get involved in an intimate get-together. 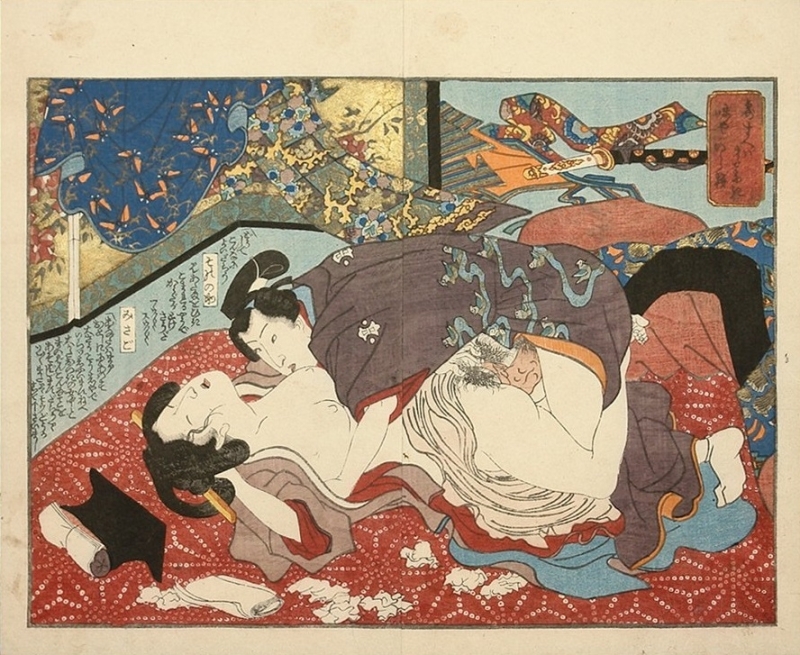 An inexperienced insatiable young samurai is making love to a mature prostitute. She has cosmetic tooth staining called ohaguro. The male’s kimono features mandarin ducks in a stream. 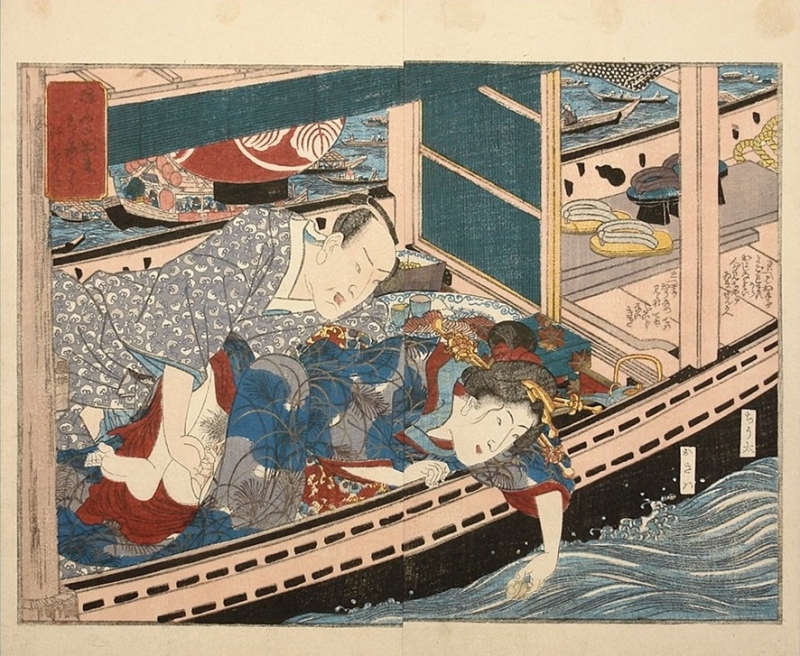 On a pleasure boat a courtesan is cleaning a sake cup in the water of the river while her client is playing with her private parts. In the background we can see a lot of traffic on the water. A superb scene with a loving couple embracing it each other tightly at the moment of orgasm. 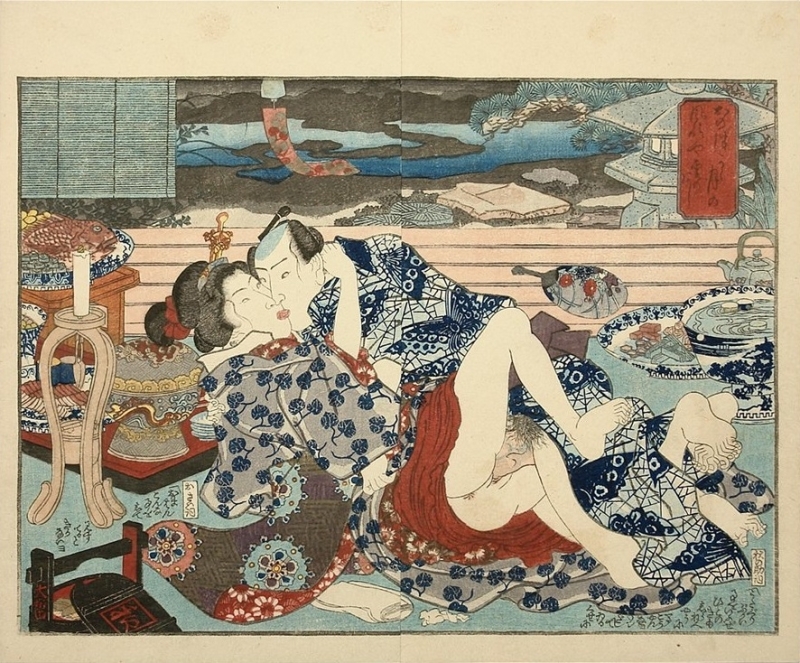 A couple has interrupted their dinner for an intimate exchange. The garden and the pond behind the couple add to the atmosphere. 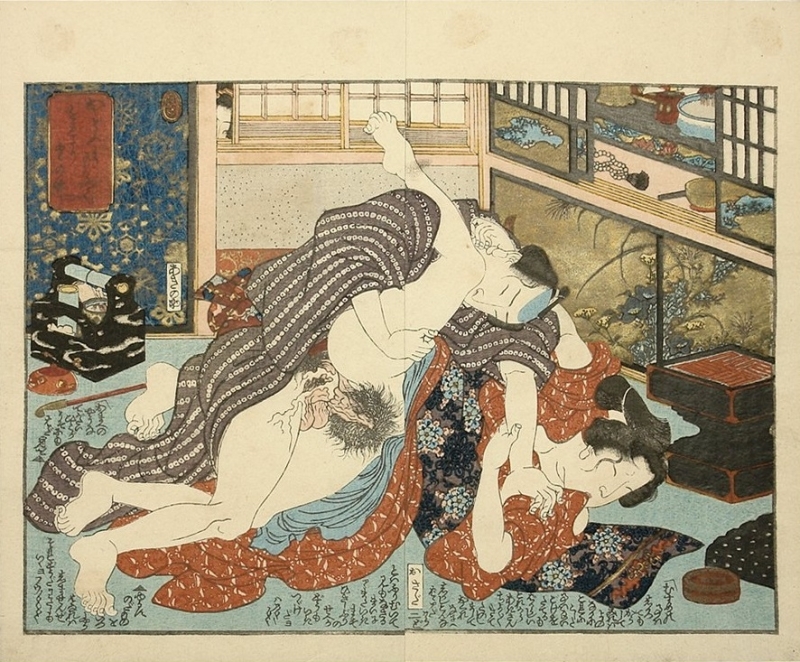 A couple involved in wild lovemaking is being watched by a female voyeur who’s looking through a crack of the opened window in the background. In her excitement, the woman laying underneath her partner, is passionately biting the sleeve of her kimono. 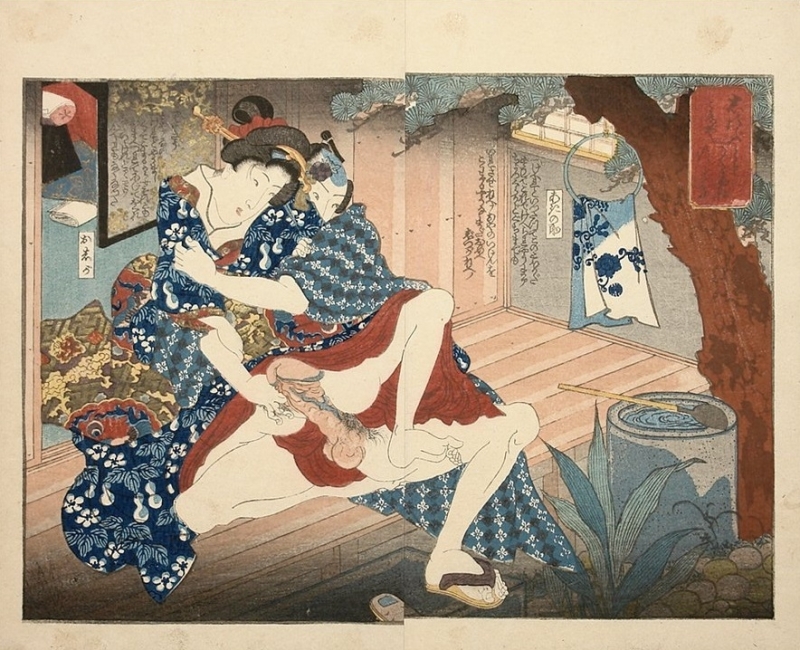 Outside on the porch a man has grabbed his lover and is stimulating her private parts while his erected member is ready for action. A stone water basin with a bamboo scoop can be seen next to them. 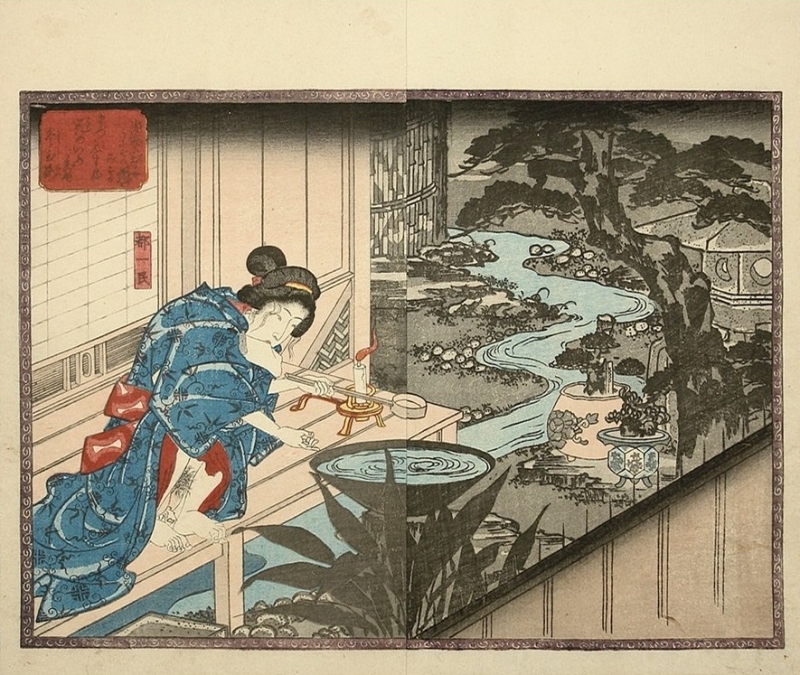 A subtle scene featuring a woman on the porch of her house getting some water from a bowl. The tissue that sticks out of her private parts is a reminder of her activities inside the house. 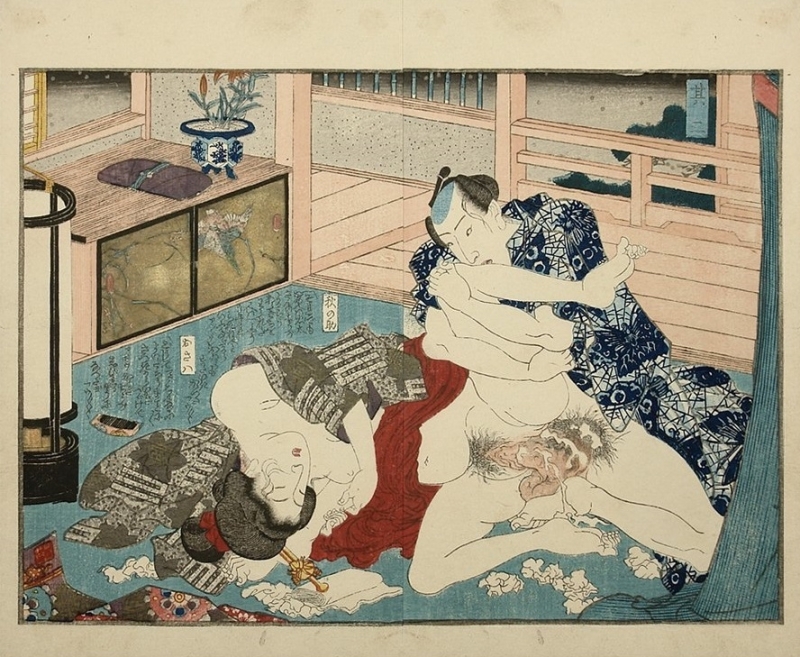 An insatiable couple is making love all night long as indicated by the countless tissues surrounding them. The gold-lacquered cupboard behind them features a kingfisher sitting on a twig lurking for prey. A dynamic comical scene of a male jumping of a balcony while being chased by a dangerous woman holding a wakizashi (samurai short sword). 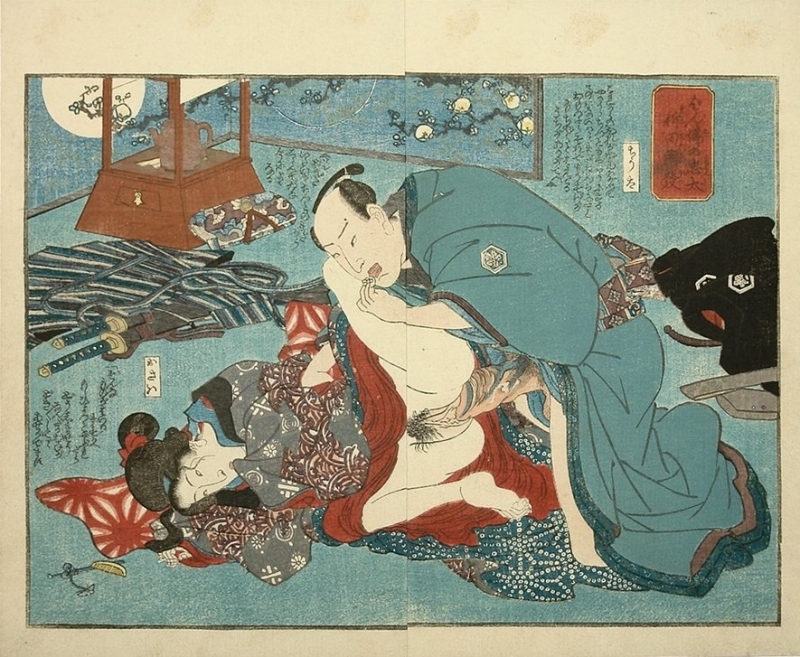 A middle-aged samurai is moistening his fingers to make it easier for his huge member to penetrate his lover’s vulva. 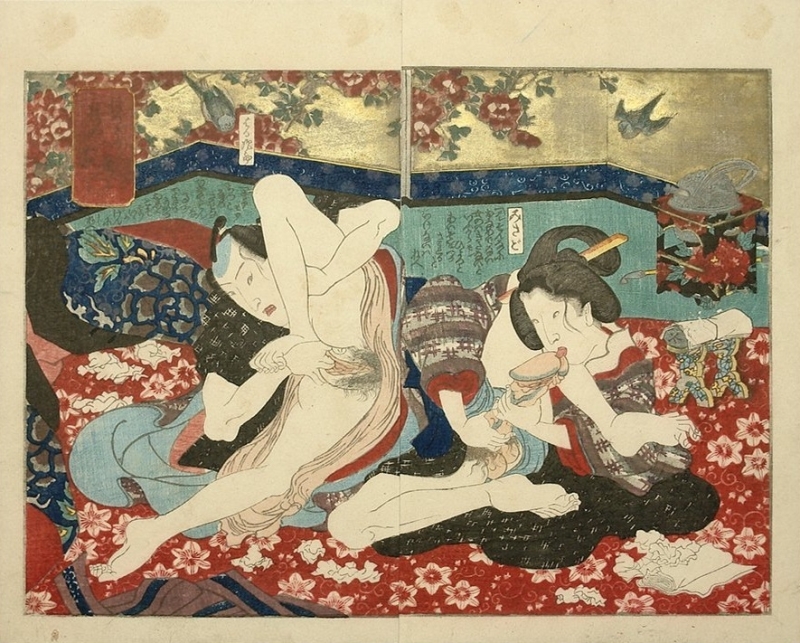 A striking design featuring a couple that are about to have mutual oral sex in the sixty-nine pose. The gold-lacquered folding screen behind them feature swallows and peonies. 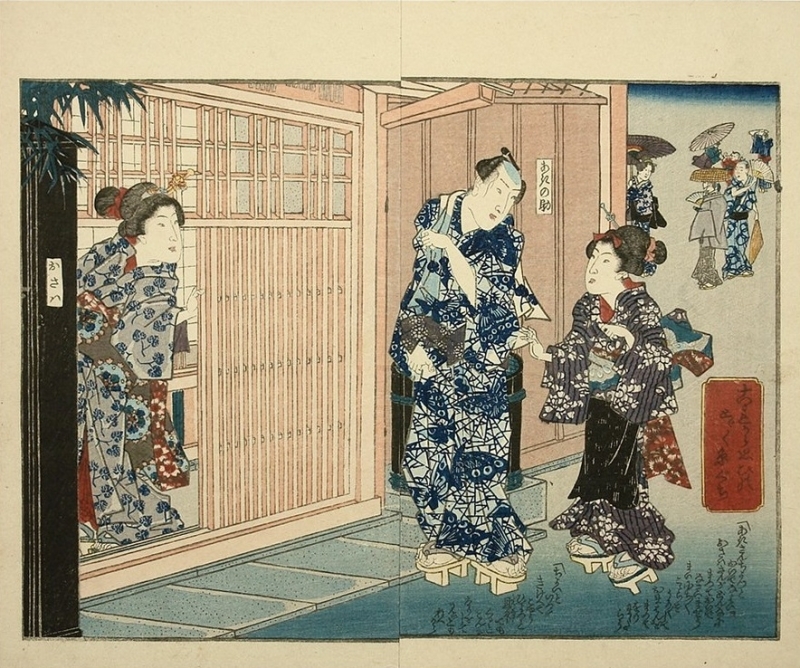 A maiko (a young geisha in practice) has plied a customer and they are now negotiating on the special services of the mature courtesan who is standing at the door. 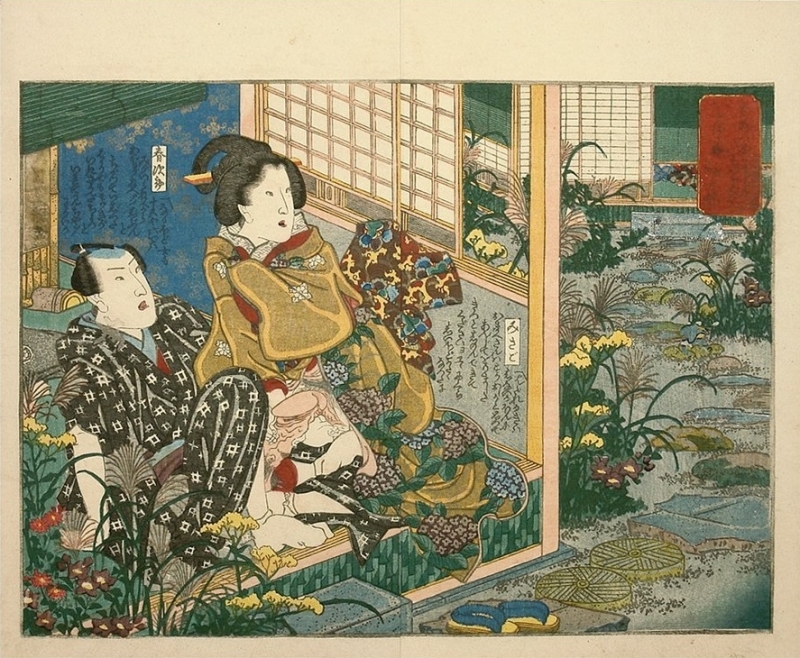 A vigilant couple sitting on a porch in the front of their house are scanning their surroundings. The woman is stroking the man’s penis as they get ready for intercourse. 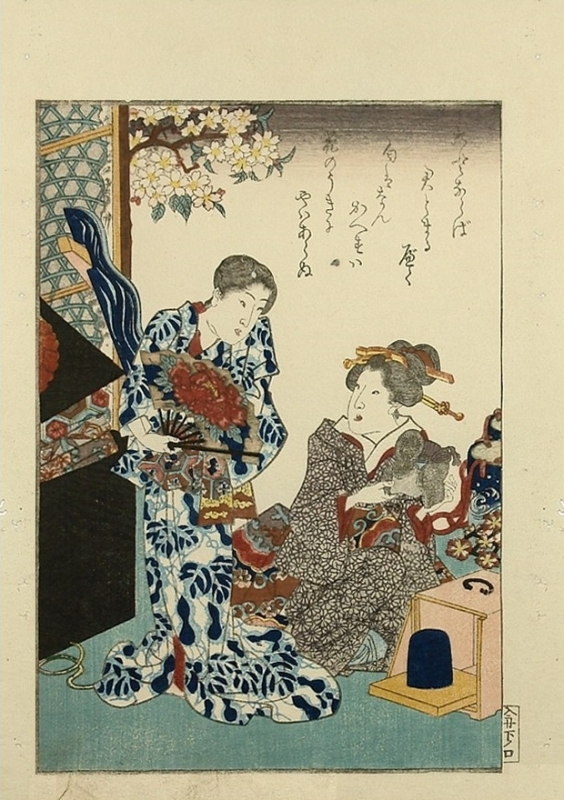 A courtesan is handing a wig to her colleague. They are getting ready to get to work. A very interesting ‘behind the scenes’-design. 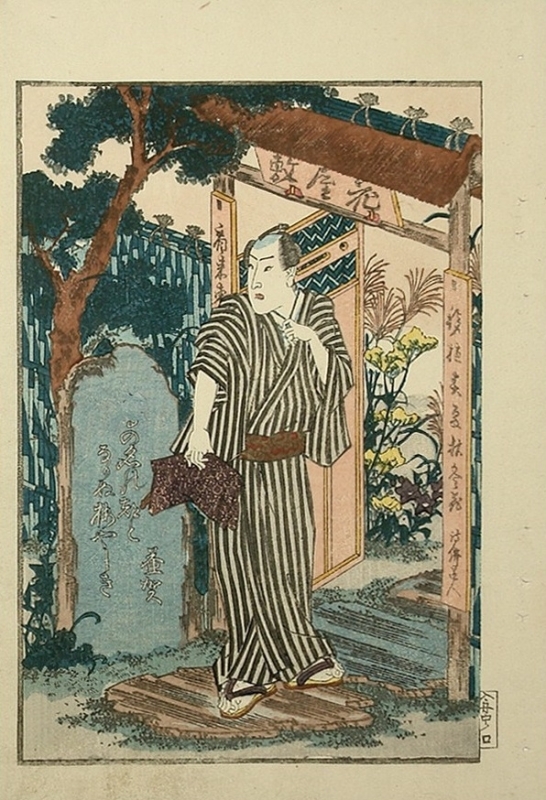 A merchant is standing in front of the entrance of a brothel.” 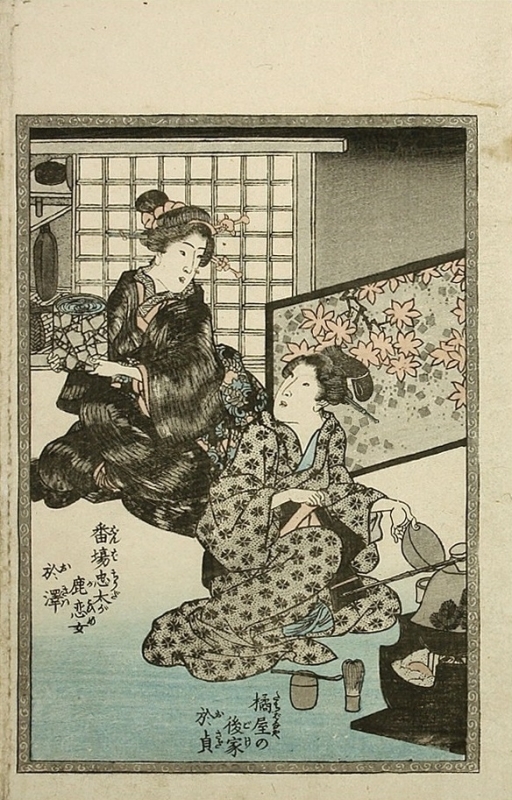 “Two courtesans have a get-together during their chores. This woodblock design has been printed almost exclusively in the colors grey and light blue.” 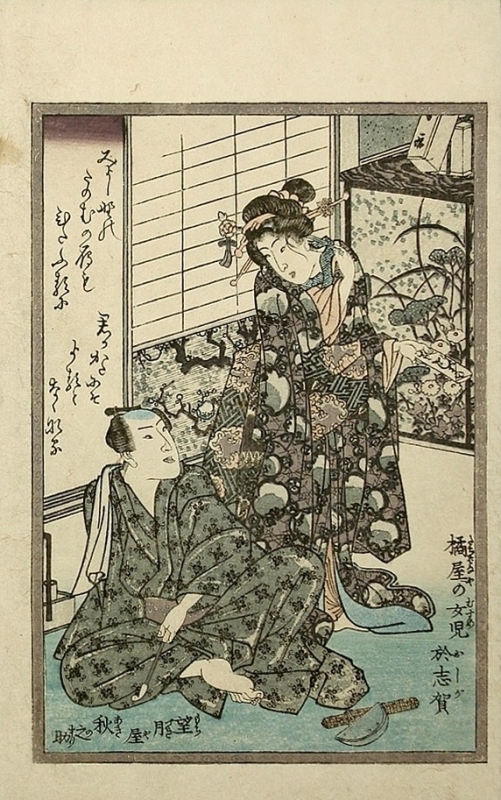 “A courtesan and her client are relaxing in a private room. This design is dominated by the colors grey and light blue.” 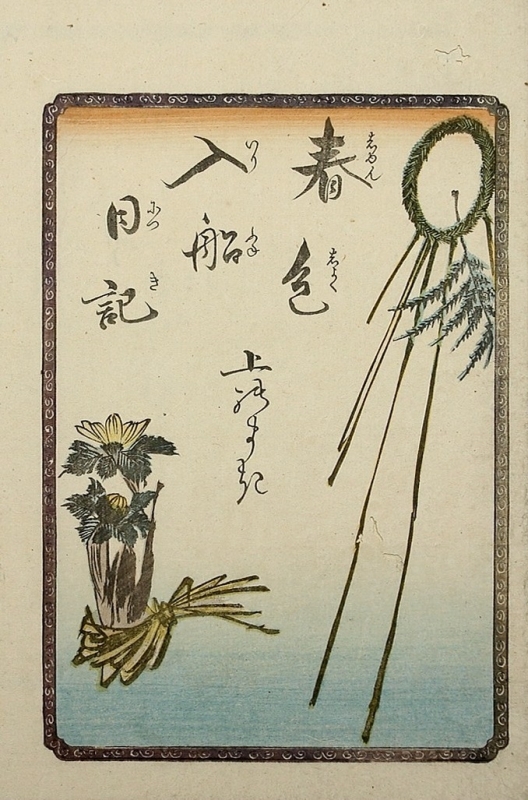 “A peaceful image of a flower arrangement and a garland.”

In Premium you can find an extended version of the article with additional detailed images....!!

Click HERE for an article on a rare complete book series by the shunga master Kuniyoshi revealing other pleasure quarter secrets.....!!

A Conversation with the Illustrious Founder of Whores of Yore, Dr. Kate Lister
27 juni 2022
Place comment