Enchanting Shunga Images With a Touch of Winter Magic (P2)

In part 1 we had a look at designs by Keisai Eisen and Isoda Koryusai. Now we’ll proceed with another one by Eisen that is inspired on ‘Fujiwara no Teika on horseback‘, a trendy topic among ukiyo-e artists, and a more uninviting image that takes place at the graveyard designed by Koikowa Shozan.

The title of this shunga print (Fig.1,) alludes to a poem about the Sano Ferry (Sano no watari) by the poet and courtier Fujiwara no Teika (1162-1241). The verse it appeared in the imperial poetry anthology Shin-kokinshu (New Anthology of Ancient and Modern Poems, 1201-5).

The poem was pictorialized in Yamato-e painting and featured the figure of Teika on horseback. Much later it became a subject in ukiyo-e prints, usually in mitate-e form, with a young woman pictured crossing the bridge on horseback or on foot. However, in this composition Teika’s verse is placed within an eroticized context:

No shelter to halt
my horse,
to brush off from
my sleeves
all the snowflakes,
dusk at Sano Ferry.

That this is indeed a ferry stop is clear from the stone steps that lead to the water’s edge on the right.

This panel is from an album that is striking for the period in that many of the scenes are set en plein-air and not within the confines of establishments in the pleasure quarters.

Richard Lane on this design:

“In the second shunga plate we view another tableau full of literary allusions. A young couple on travels is displayed before us in impassioned embrace in the snow: reclining on a straw cloak, with straw-hat at side. Only incidentally do we next take notice of the wooden piles and stone steps of a river-ferry at right, and – above a clump of snowbent pampas-grasses – a flock of plovers flying blithely in the background.

The loves themselves are hardly evocative of classical themes, and were doubtless chosen purposely to contrast with the poetic setting: which is specified in the cartouche at right: “Snow at Sano.” Doubtless, this makes reference to one of the most famous of Japanese classical verses, by the courtier Fujiwara no Teika.”

Click this link: ‘A Light Spring Snow‘ if you want to check out another unusual plate from this series!

Fig.2. ‘Graveyard‘ (c.1854) from the series ‘Shaka hassô zoku yamato bunko (A Japanese Version of the Life of the Buddha, Continued)‘ by Koikowa Shozan

A rather shocking scene (Fig.2.) with an unsuspecting young woman sleeping against a gravestone while an old unsavory samurai is wetting his fingers before committing a lewd act. The peaceful snowy setting is misleading in this case. The design is by the undervalued Koikowa Shozan (1821-1907) and is from the series ‘Shaka hassô zoku yamato bunko (A Japanese Version of the Life of the Buddha, Continued)‘ published around 1854. 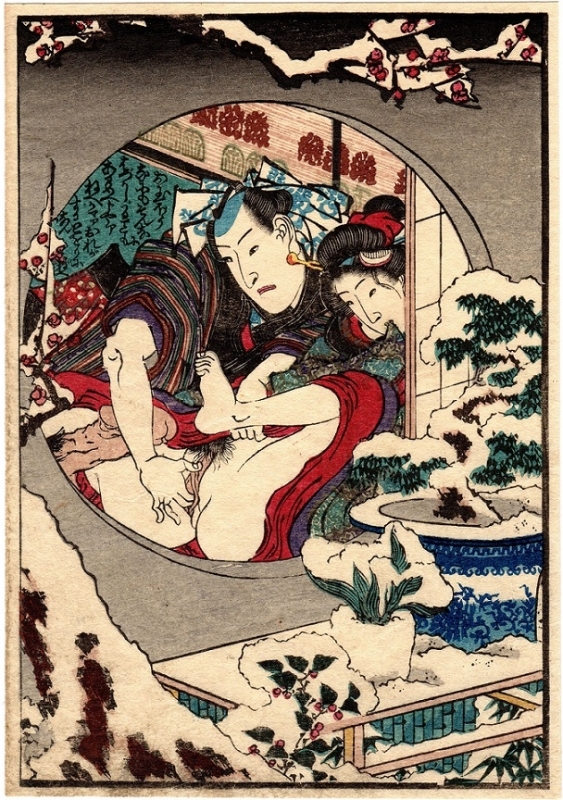 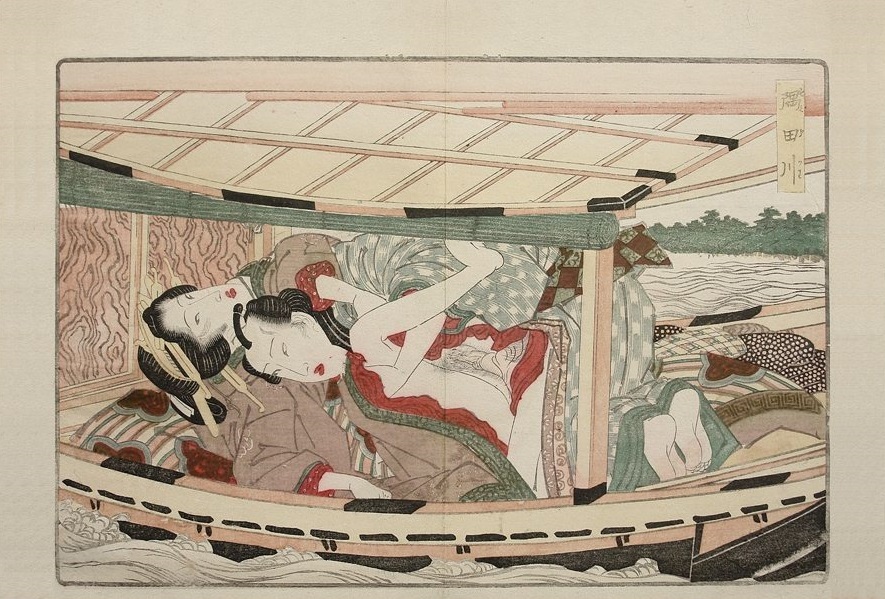 I also love this one by Kuniyoshi, where the couple is framed by beautiful http://www.kuniyoshiproject.com/Edo%20nishiki-e%20azuma%20bunko_files/image011.jpg" rel="nofollow">pine branches in snow.

Yes, that's a irresistible scene. Great art (IMHO) evokes a compelling world and this design really draws you in!