Daikokuten is also one of the Shichifukujin, the seven Japanese gods held in superior and high esteem. While we love the fact that Daikokuten is the god of commerce and prosperity, he is also the patron being of farmers, bankers and cooks, a side of Japanese folklore that is just fabulous.  Every cook needs a patron!   Not stopping at cooks, Daikokuten is also the protector of crops and will always keep your farm, garden or vegetal patch safe.

Daikokuten is also considered to be a hunter of demons, making his worth even more valuable than just a god of prosperity and commerce.  The legend, and Japanese legends are extraordinary, say that Daikokuten used a sacred talisman as a trap, hanging it off the branches of a tree and catching his first demon.  He is therefore highly regarded and pictures, sketches, etchings and sculptures of Daikokuten are in high demand.  Many Japanese hang his picture of photograph in their home, or display a sculpture in the main living area.

Daikokuten is easily recognisable by his fabulous smile, his stocky legs, the hat that is always on his head, and by the bag over his shoulder.  He carries valuable objects with him  where ever he goes, thereby being the god of prosperity. 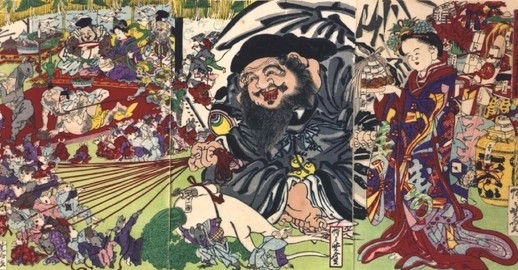 The Japanese name Daikokuten comes from the Sanskrit name Mahākāla, translated into Great Blackness.  Daikokuten, while generally male, can also manifest as the female goddess, She of Great Blackness or She of Great Blackness of the Heavens.
Place comment
Edit article Dashboard Settings Website Design Article cached on Fri. 2 Dec 05:10
Renew cache
We use cookies
To give you the best possible experience, we use cookies and similar technologies for performance, analysis and personalization to help the site function better to your needs. privacy policy
Only functional cookies
Accept all
Cookie instellingen
privacy policy
Voorkeuren opslaan