Another of the seven great gods of Japan, Fukurokuju was initially thought to be a Chinese hermit.  He became a distinguished god during the reincarnation of Hsuan-Wu, a Taoist god.  Fukorokuju is much loved in Japanese folklore, being a god that brings the people luck, wealth, happiness, wisdom and long life.

It is said that Fukorokuju had special powers.  He did not need to eat and could live on air and his breath alone.   Fukorokuju was a large man with a large head - almost the same size as his body - and only wore traditional Chinese clothing.  He would carry a scroll in one hand and a cane in the other.  The animals that accompanied him were symbolic of long life too - turtles, crows or deers, and the sketches and artworks of Fukookuju are always colourful with both god and animals included. 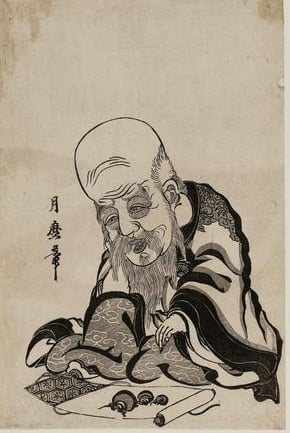 It is thought that Fukorokuku can or could resurrect the dead and is the only god who can do this.  You will find his photographs or paintings found in many a Japanese home, given that he brings luck and wisdom, long life and the ability to rise from the dead. He is also the patron of all chess players as was apparently an excellent chess player with a very smart brain.