Alphonse Inoue: Western Decadence and The Art of Ex-libris

Our current article is devoted to Alphonse Inoue, the modern copperplate engraver from Japan. Information on his bio is scarce. It’s known that he was born in 1941 in Kobe City, Hyogo Prefecture, and began his art studies in 1959 at the Musashino Art College (now Musashino Art University). Inoue produced illustrations both for Eastern and Western books and took part in several expositions. The collection of his engravings “Belles Filles” was released in 2003. His dreamy and surreal works, often referring to lesbian sensuality, have a subtle correspondence with those of the Argentinian painter Leonor Fini. 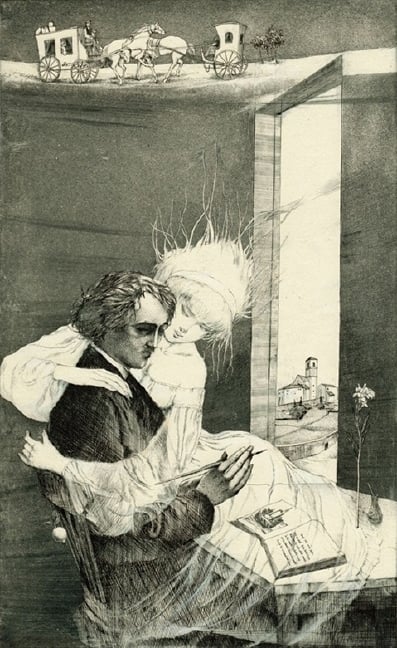 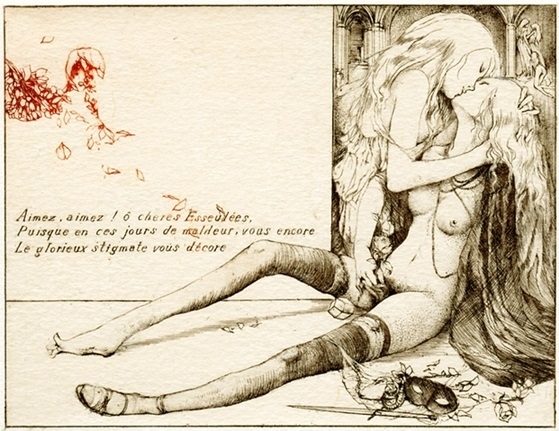 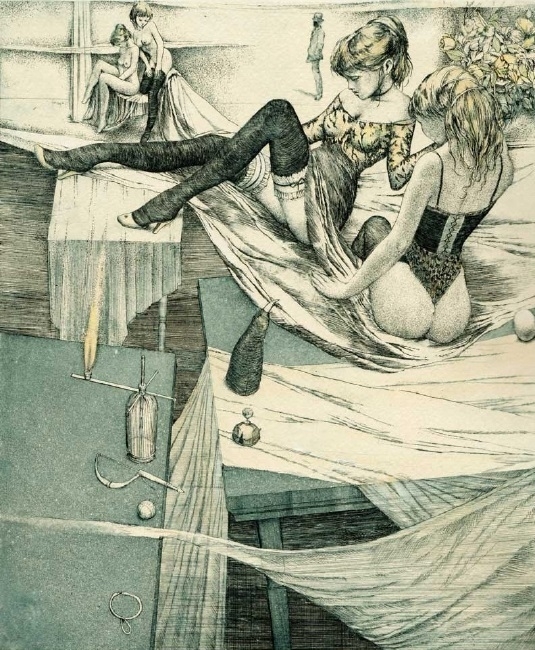 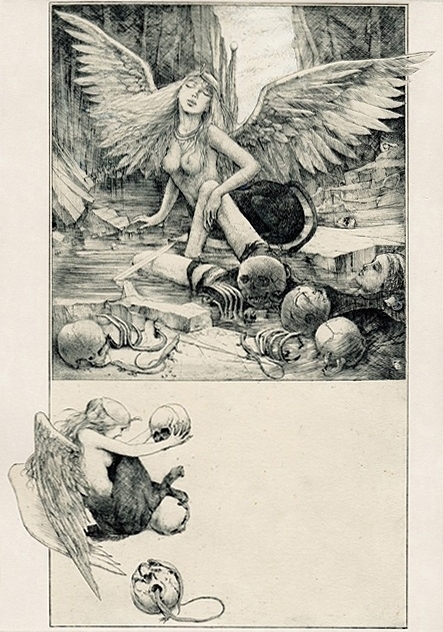 Fig. 5. Sphinx in the cave (yart-gallery.co.jp) 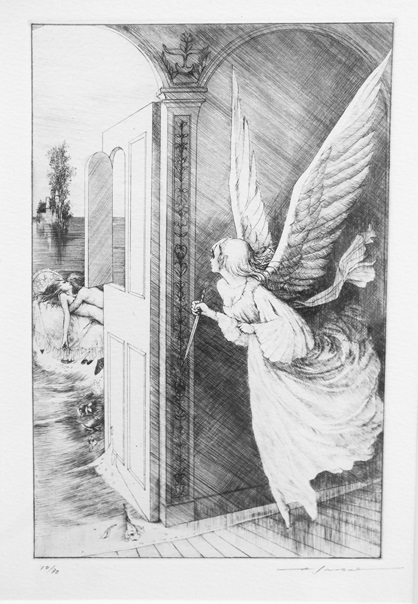 Speaking of Japanese culture and art, we often consider them secluded and self-centered. Hearing the term “Japanese engravings,” we imagine definite things done in a definite way. At the level of the content, the engraving might be a meditative picture of a landscape or an animal, thus, being close to Japanese haiku. Or it might be a depiction of Japanese mythological plots and heroes or a variation on a traditional eight views set, which became viral in the Japanese culture a long time ago. Alphonse Inoue is a striking example of the opposite. His pictures are devoted to Verlaine, Coleridge, Gautier. Inoue’s approach to the topics and mood of his works are similar to those of Böcklin, Rops, and von Stuck. The artist exploits widespread western motifs such as Death and The Maiden. Let’s note that traditional depictions of this theme exclude erotic interaction between two figures. Much more often, the artists depicted the maiden as terrified by the presence of death. The sexual tension between the opposing characters appearing in the designs of Inoue is comparable to the famous chiaroscuro woodcut by Niklaus Manuel Deutsch I (1517). 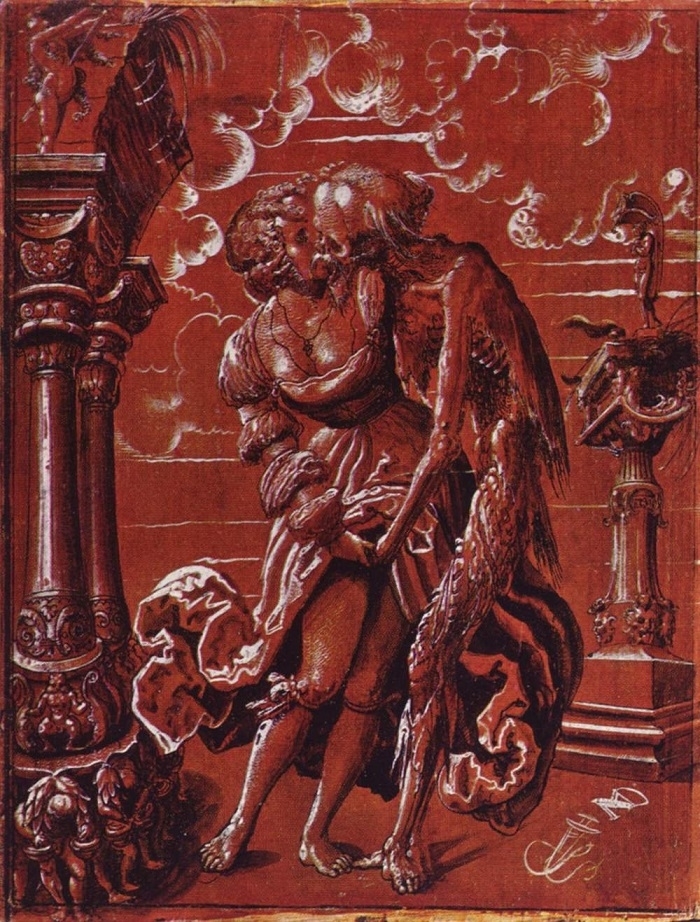 Fig. 9. Niklaus Manuel Deutsch I, Death and the Maiden (Wikipedia.org)

Another motif typical for modern art is the femme fatale. Inoue develops it in his engravings of sphynxes and works connected with the unfinished poem “Christabel” written by Coleridge in 1816. The text tells of sir Lioline’s daughter Christabel seduced by the demonic serpent creature Geraldine. Awaken at midnight by a nightmare about her betrothed knight, Christabel goes out of her father’s castle to pray under the oak tree and finds Geraldine disguised as a beautiful maiden. Geraldine tells her that, having been abducted by five men, she is left under this tree until they come back. Christabel leads the victim inside the castle, offering her to share a bed. When the quasi-maiden gets undressed, Christabel sees something horrifying of which Coleridge doesn’t speak straight: …she unbound/ The cincture from beneath her breast: / Her silken robe, and inner vest, / Dropped to her feet, and full in view, / Behold! her bosom and half her side— / A sight to dream of, not to tell! / O shield her! shield sweet Christabel! From further reading, we can conclude that Geraldine is a half-serpent creature as her eyes can transform into those of a snake. Christabel spends that night tightly embraced by Geraldine, which obviously implies a lesbian scene. With lesbian erotica as one of the recurring topics, Inoue couldn’t but illustrate the poem. 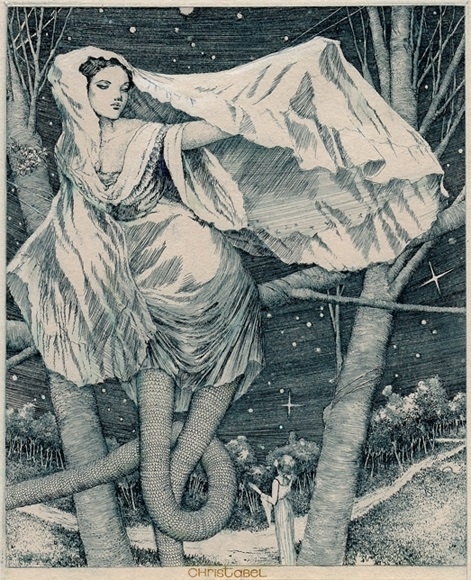 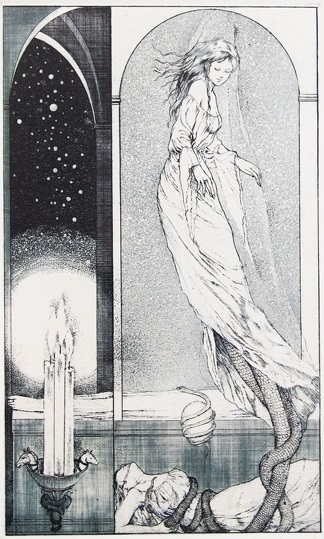 Fig. 12. Ex-libris with the mermaid or with Geraldine from Coleridge’s poem (yart-gallery.co.jp) 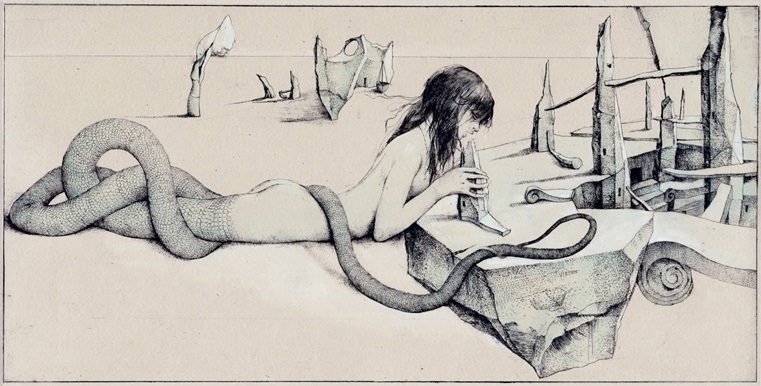 The most well-known work of Inoue is the series of ex-libris images that prove the reading is not such a tedious activity. We’ve already looked at sensual ex-libris by Eric Gill. The set of Inoue differs from Gill’s ornamental paganism with its’ attention to lines and curves of the naked body of the first woman in the woods. Inoue depicts surreal female orgies or lonesome beauties literally pleasing themselves with books of various sizes. The images represent the imaginary world to which the reader is transported. They contain references to Coleridge, Verlaine, and Swift placed in the surreal settings with cages, jellyfishes, and dream-like maidens who can be femmes fragiles and femmes fatales at once. 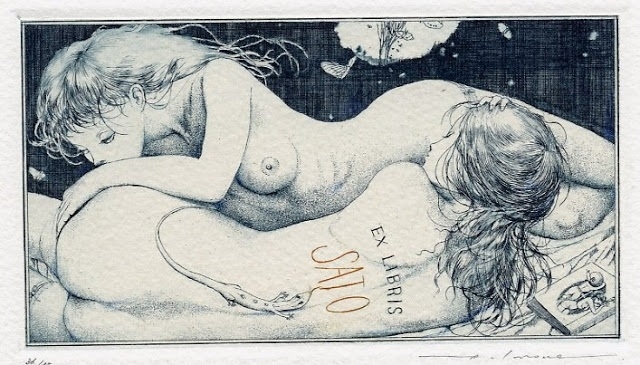 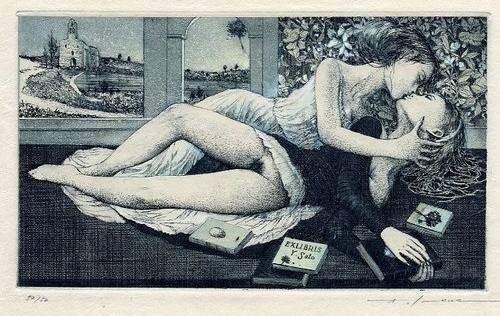 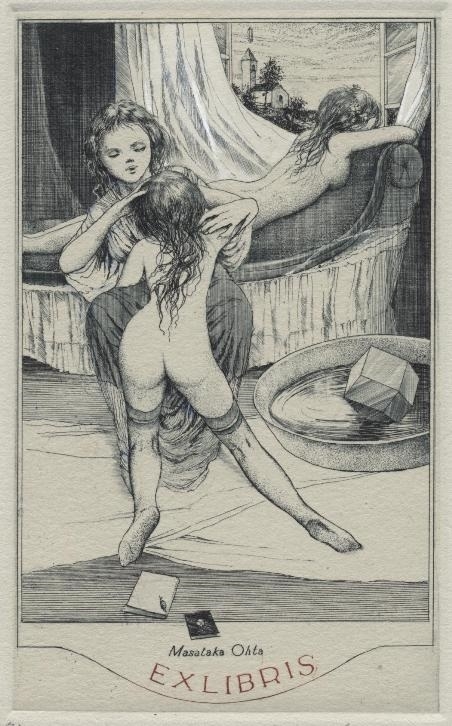 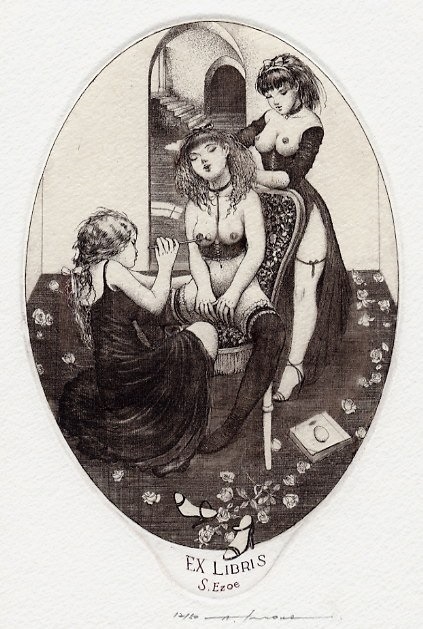 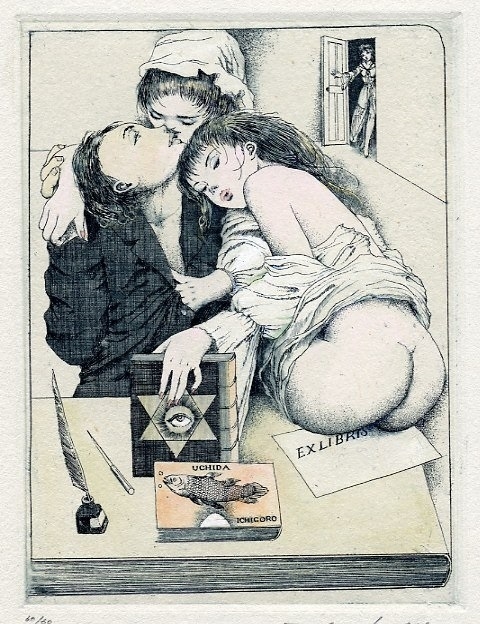 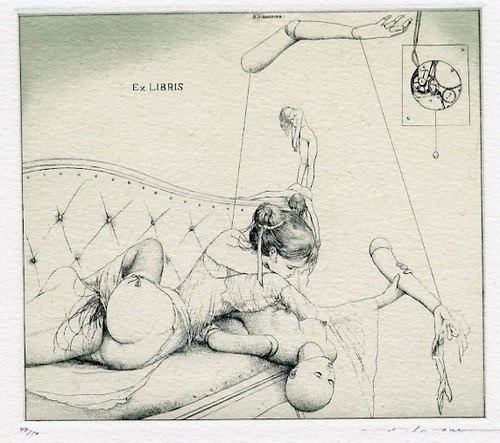 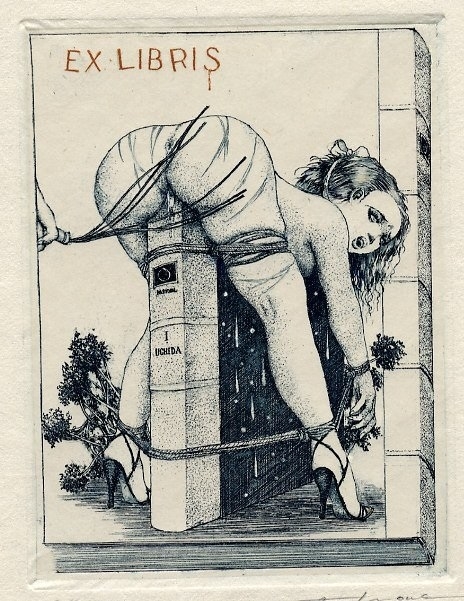 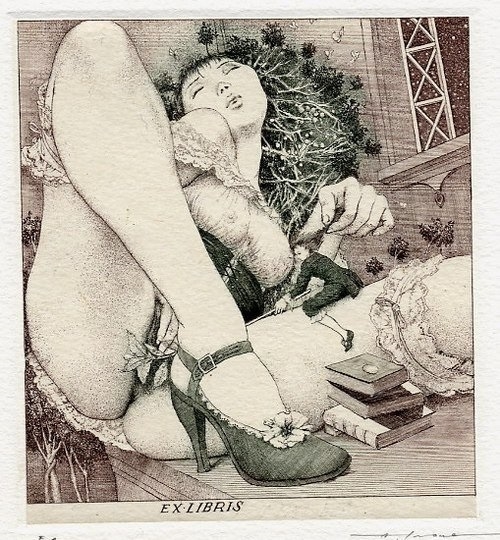 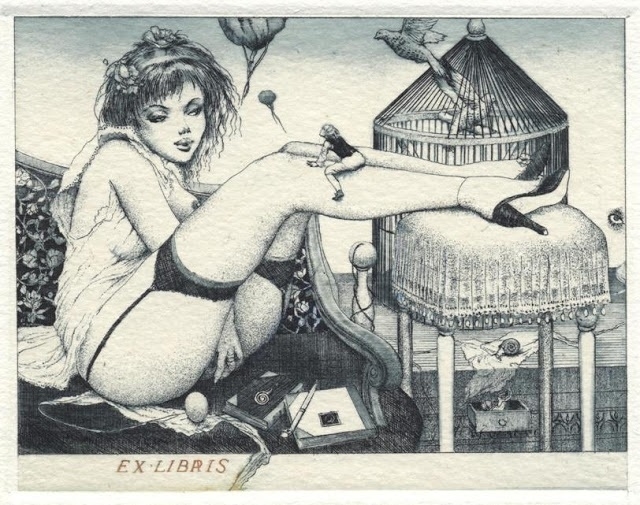 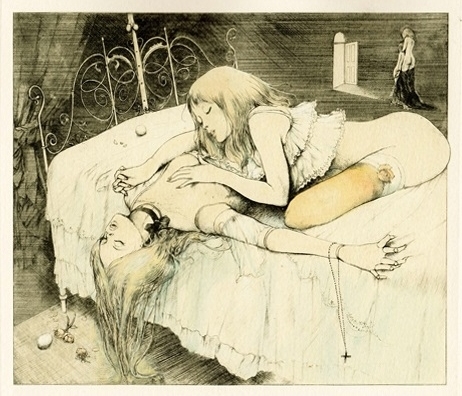 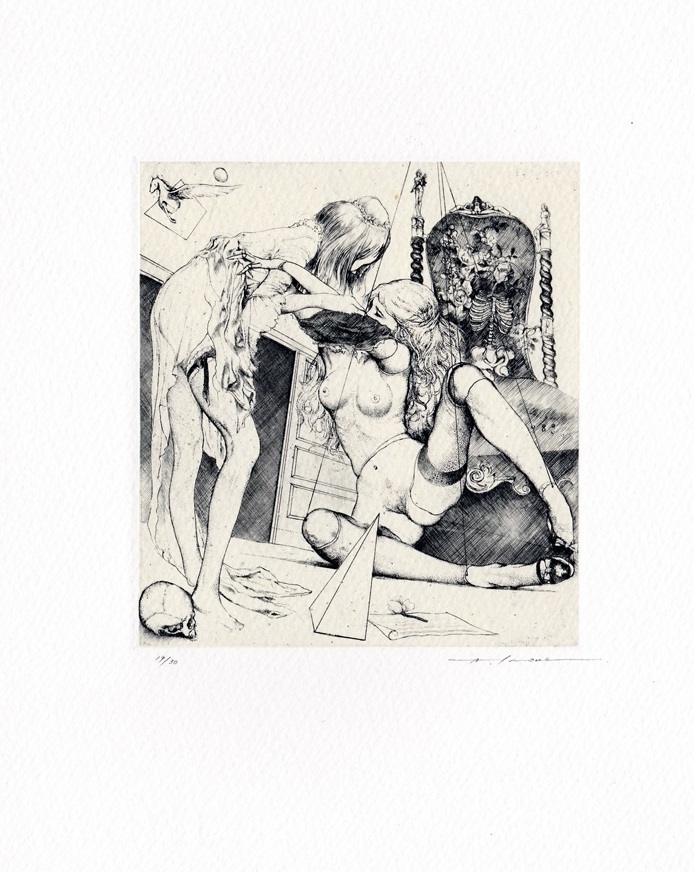 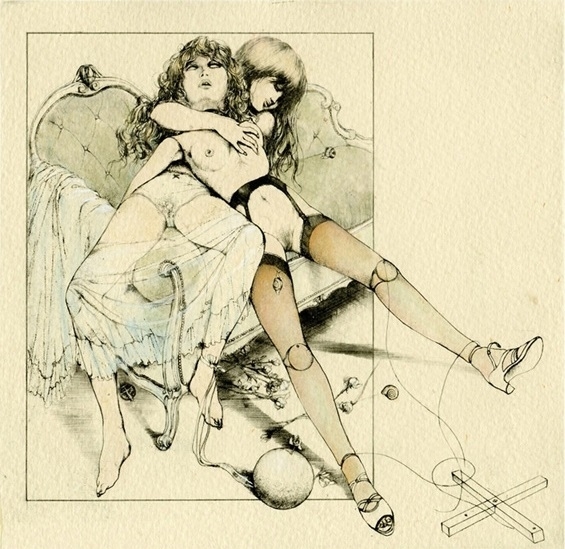 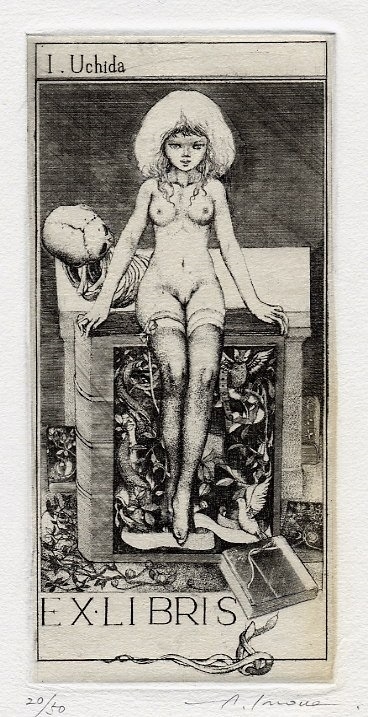 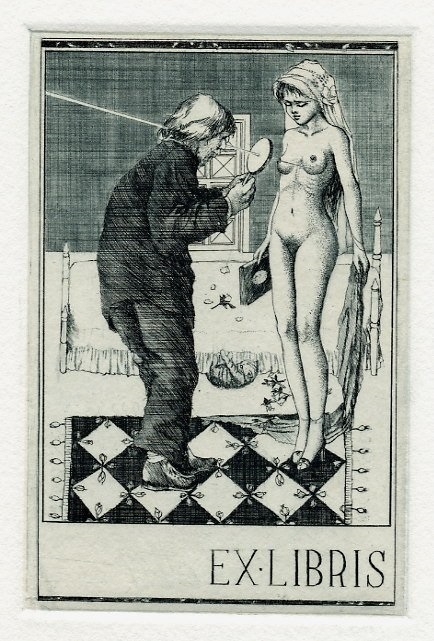 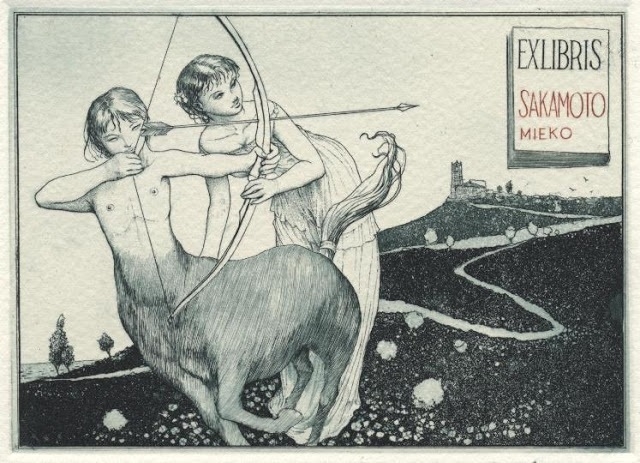 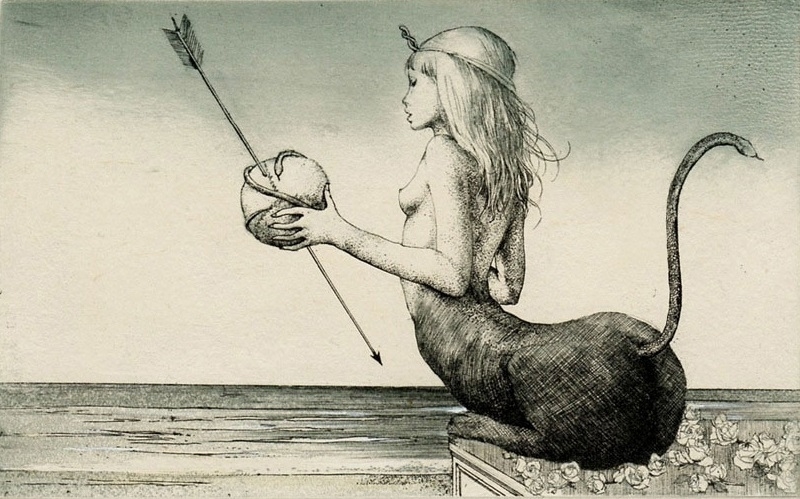 Fig. 34. Sphinx looking far away holding a heart pierced with an arrow and a snake wrapped around it (yart-gallery.co.jp) 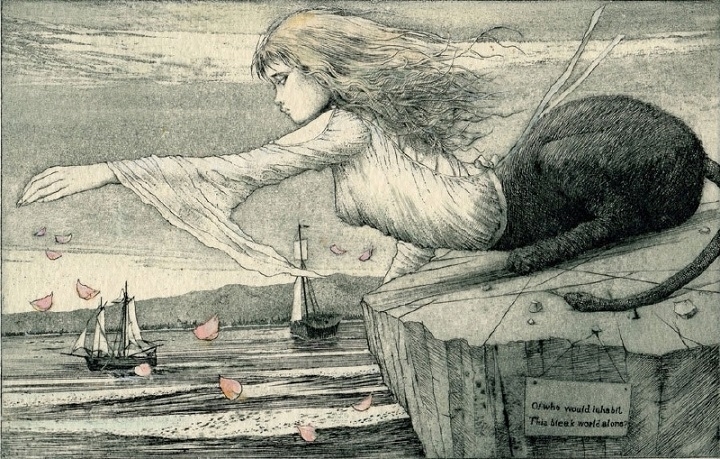 Fig. 35. Sphinx spreading the rose petals on the cliff. The cliff is decorated with lines from Thomas Moore’s poem “The Last Rose of Summer” (1813): “Oh! who would inhabit /This bleak world alone?” (yart-gallery.co.jp)

Click HERE and check out the German artist who inspired Inoue…!!

We’re always curious to know your thoughts on our content so leave your reaction on this article in the comment box below….!!

Alphonse Inoue: Western Decadence and The Art of Ex-libris
21 juni 2021

Probably the best I have seen here! Thank you.