In an earlier article in which we explored paintings depicting an Hitler practising onanism, one artist who recurrently visited this striking theme was the German artist Blalla Hallmann (1941-1997).

Few artists of his generation painted against the existing social order in such a provocative and caustic way as Hallmann. He was a history painter in the best sense of the word. His subject was German history, more precisely the false existence in fascism and the cynicism of living and dying in the mendacity of imperialism and Catholicism (Fig.3 and 4). Full of anger and contempt, he painted her greedy, violent grimace again and again, peppered with sexually obscene provocations and meanness, which in their visual directness are both funny and ruthless. 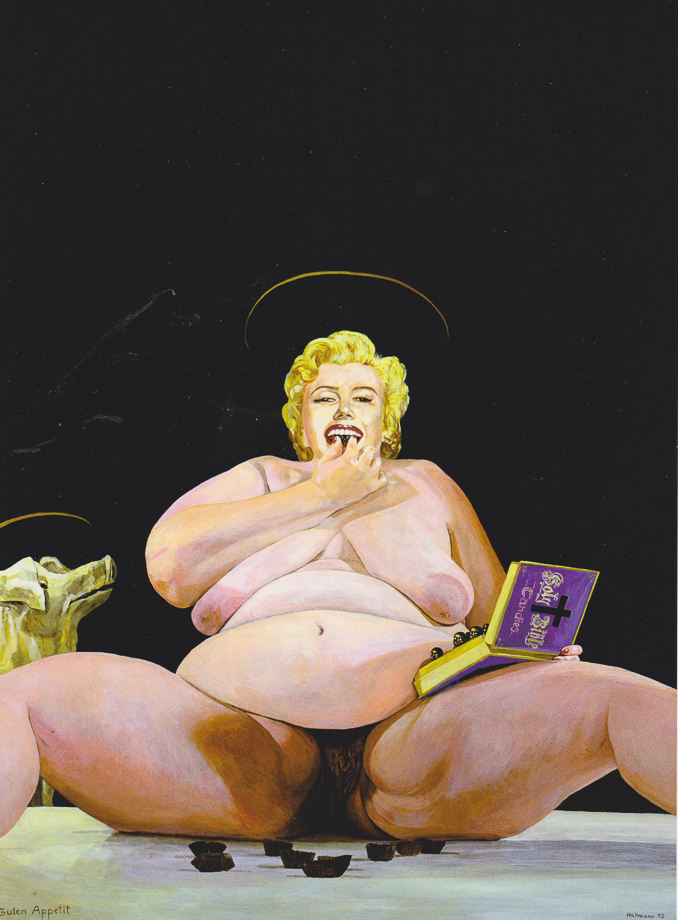 Hallmann did not shy away from depicting the bare facts with disgust and irreconcilability - but in a sophisticated way of painting - and so he targeted those responsible in his opinion: He portrayed ex-Federal President von Weizsäcker or Helmut Kohl in the greatest unsavory manner - one in the Officer's uniform of the Wehrmacht, the other during the sexual act (Fig.8). 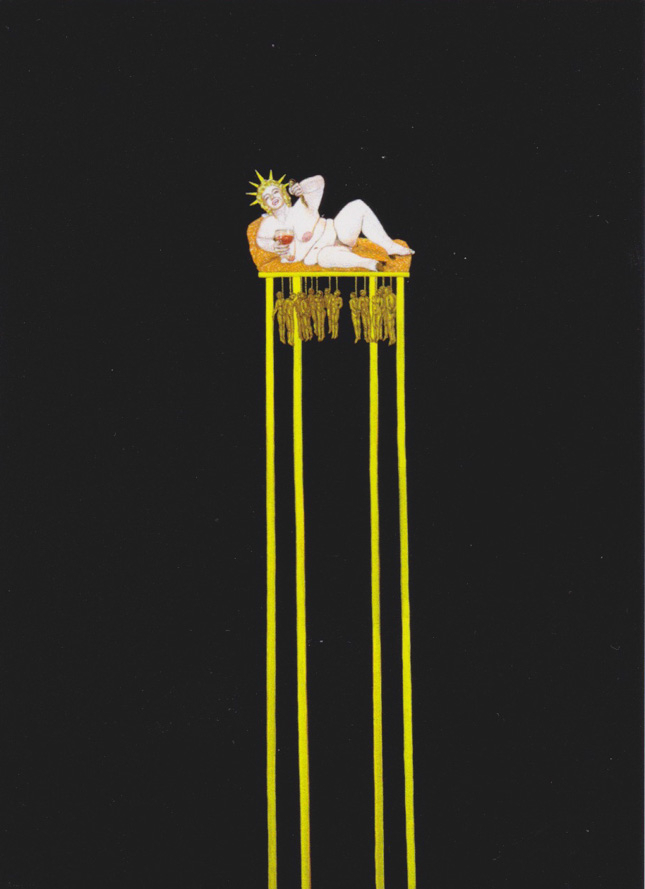 Another inseparable theme in Blalla's work was his deeply rooted aversion to Western capitalism, and America, the largest representative of this system where he stayed for 2 years, was especially targeted in his work. For this he used typical American icons, such as Marilyn Monroe whom he portrays as a naked, corpulent figure who gobbles chocolates from a candy box disguised as a bible. (Fig.1), or John F. Kennedy making love to a bear while being encouraged by the same Marilyn Monroe (Fig.9). It is a world filled with shit and cum, where the enslaving capitalist opposition of consumption and production is reduced to its most vulgar human equivalents – fucking and shitting (Fig.10).

Man Is a Pig

Hallmann's garish exaggerations and crass pornographic depictions  were just the right thing to do to denounce the contradictions between false ideal and banal reality and to arrive at the devastating verdict: "Man is wolf to man, he is a pig!" 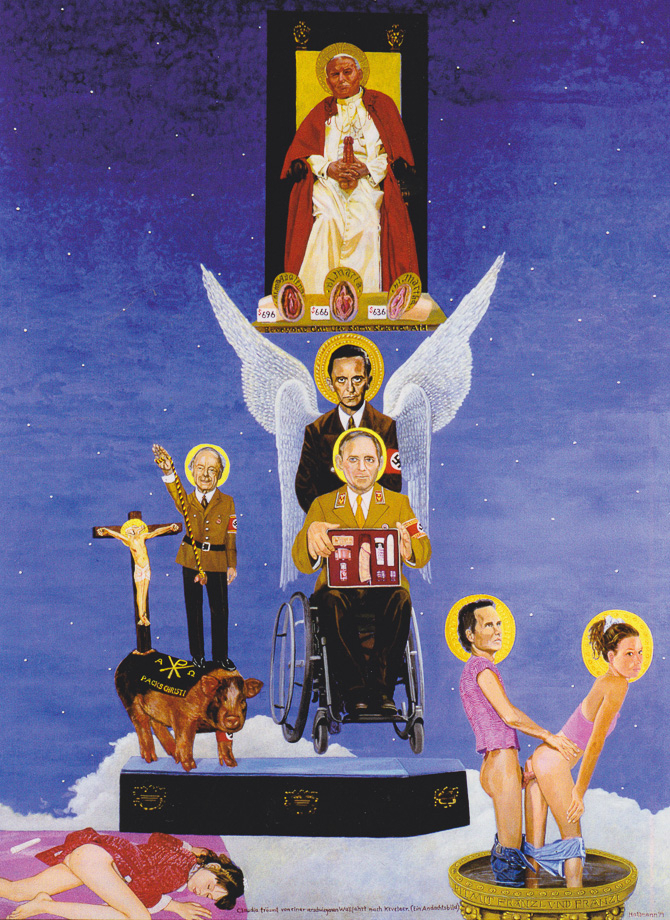 Hallmann was not only loved for his sharp realism and relentless criticism of power, but was also accused of perversion. To this day, Hallmann is often unjustly overlooked in the official art scene. 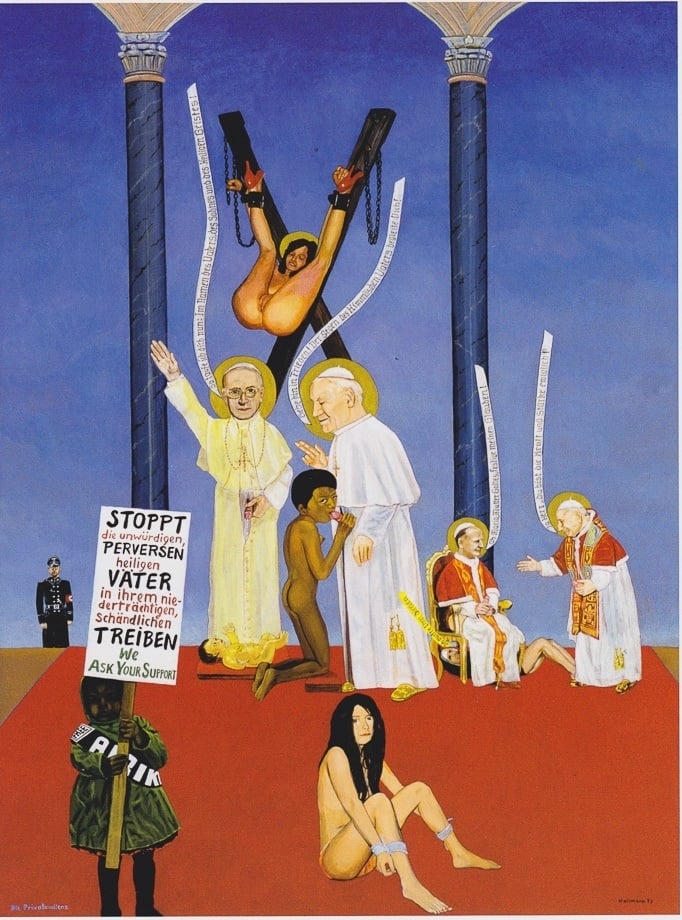 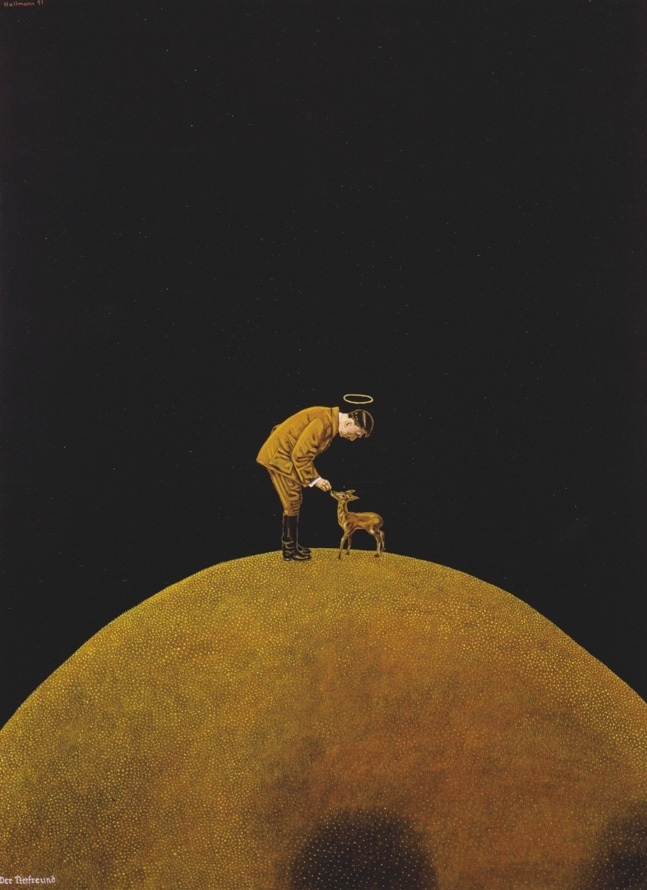 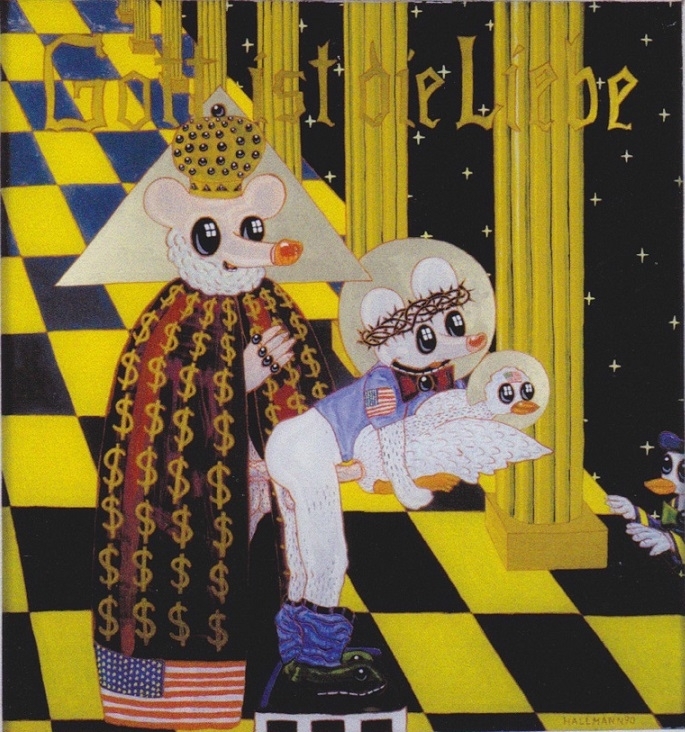 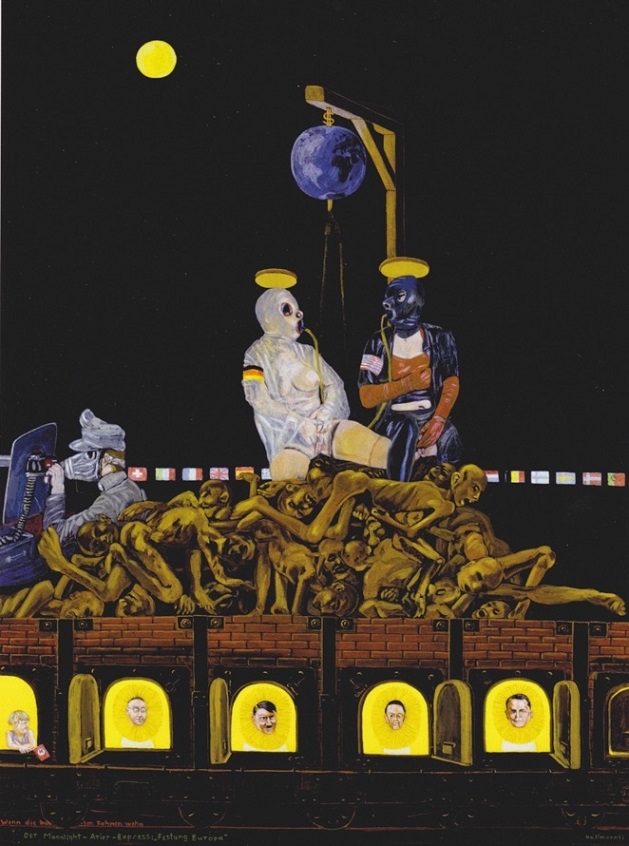 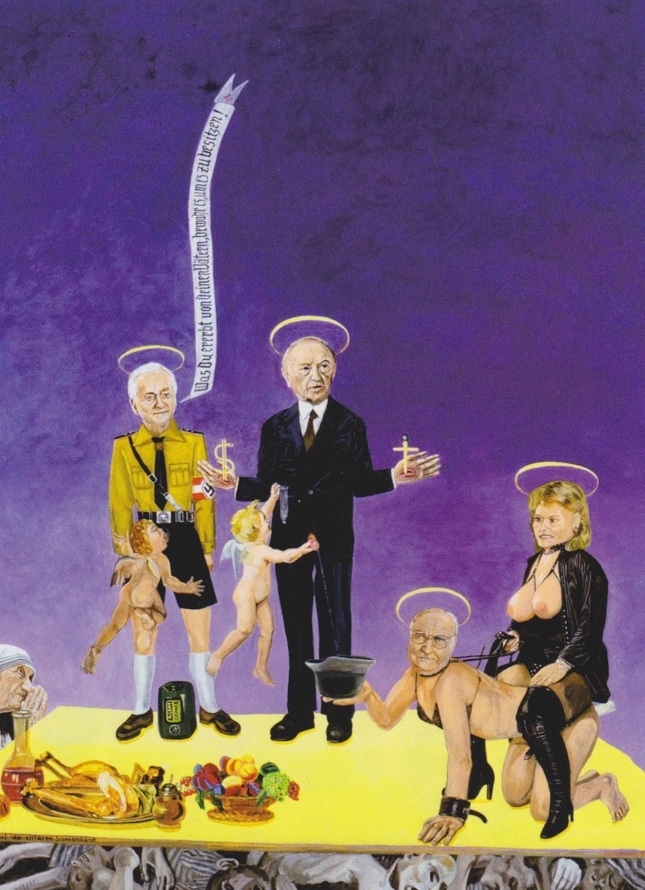 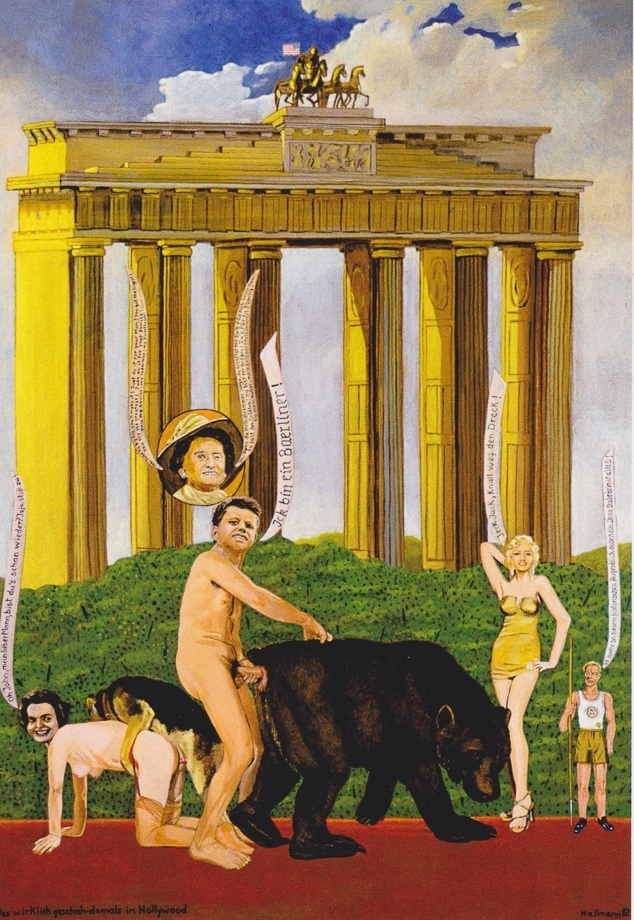 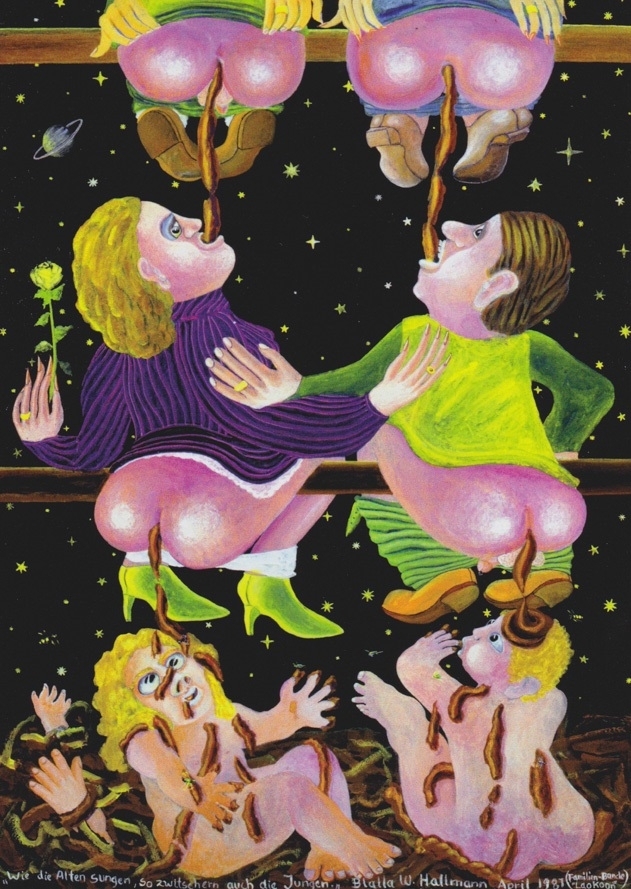 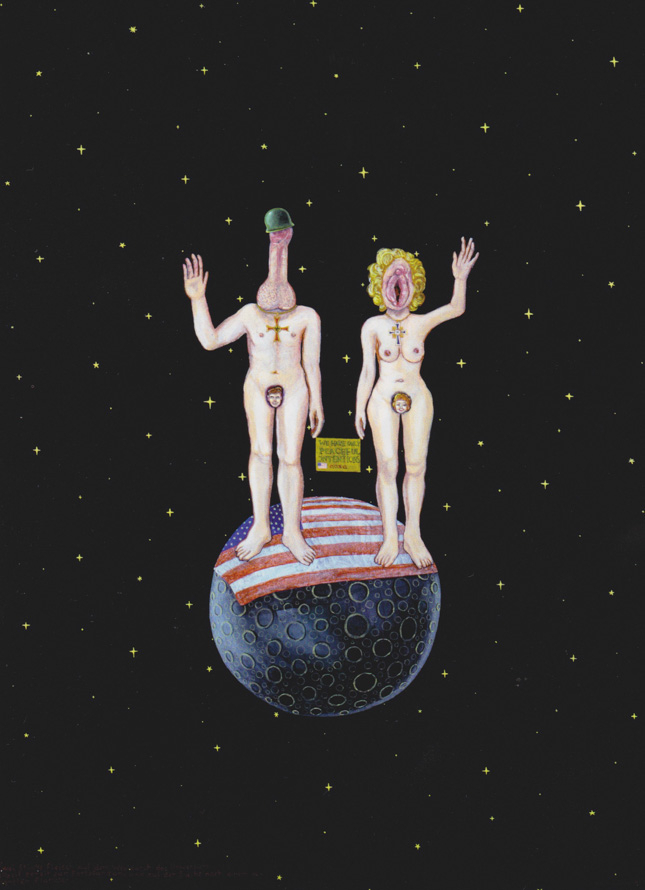 Click HERE for the blasphemous sensuality of Camille Clovis Trouille....!!

Let us know your opinion on Blalla Hallmann's work in the comment box below...!!

“Nothing is true. Everything is permitted”: the sexual journey of Druuna, by Paolo Eleuteri Serpieri
01 april 2022