The Evolution of Eta Carinae by the Sensual Surrealist Michael Hutter

I think it's always fascinating to see the evolutionary process of an artwork. Eta Carinae is a colorful and detailed painting (Fig.2 to 7) that was produced in 2017 by the surrealist Michael Hutter (1963). Recurring in this painting many themes and figures that fascinate the artist, like the girl with the blood-squirting boobs,, the Little Rider, and Terrible Discovery.

The 'Eta Carinae ' piece evolved from a story cycle, the artist wrote over the years, "The Kranzedan Tales". and is inspired by one of the stories, "The Doll's House" (story included below). It's all in all 33 stories in this cycle, 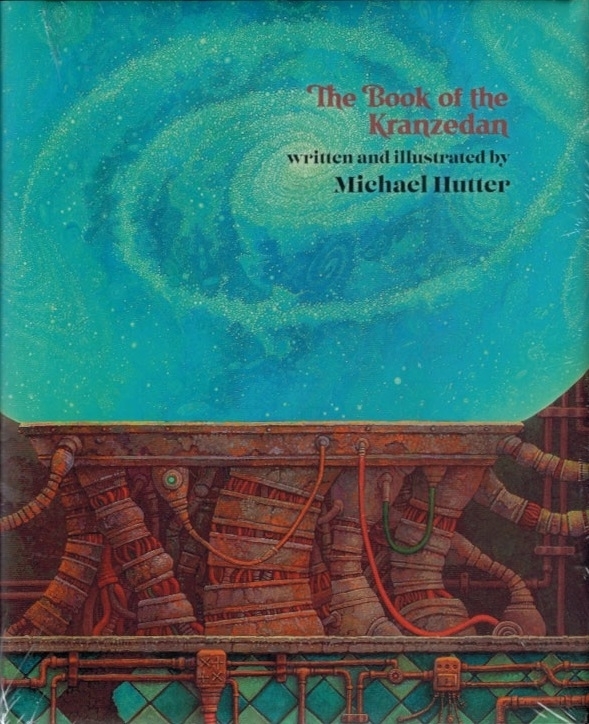 In the 33 short stories collected in Hutter's richly illustrated book The Book of the Kranzedan, the Kranzedan encounters churlish dustbin men, unkempt fairground women, a bearded man of unfathomable malice and many other dubious characters. He loses himself by the sight of the beautiful tanks in an eerie aquarium store and on the search for the Museum of Extra-terrestrial Cultures, may unveil the eldritch secrets of a chubby neighbor woman and plays a suspicious role in a wedding tragedy. These and many other weird incidents are told and none of the tales has a happy ending. Nightmares meet dark fairy tales meet cosmic horror, in these 33 grotesques, all expressing the authors conviction that there is something fundamentally wrong with our world.

Spread over this page you can read 3 of these stories, starting with...

Once the Kranzedan acquired a splendid old doll’s house complete with a wide range of accessories. The second-hand dealer, a small, stooped  man with a sickly complexion and dark circles under his eyes, wanted curiously little money for it, and when the Kranzedan proposed a lower price (it was a flee market after all and one should always haggle at a flee market) he had his offer accepted without hesitation.

No sooner had he arrived home, than the Kranzedan put the beautiful toy on his table and proceeded to spend the remainder of the day arranging the lovingly designed furniture in the little rooms.

Three storeys had the doll's house, with numerous rooms, and it was exquisitely and realistically furnished, down to the smallest detail. From the case of the large grandfather-clock there sounded, on the hour, delicate chimes; the cast-iron kitchen stove could indeed be fired with wood; yes, even the paintings, in their finely carved wee frames were actually done in oil. Only the door in the downstairs hall, behind which, in a real house, one would expect to find the cellar stairs, could not be opened, because the toy did not have a lower storey.

One evening, the Kranzedan sat before the doll's house for a long time, imagining those who dwelt within its walls and the stories of what came to pass therein, and eventually he fell asleep. His daydreams continued in his sleep, but they turned into something wicked and threatening. He was reduced to the size of a doll, running about the house where he witnessed sadistic machinations and cruel excesses of violence. Finally, he found himself before the cellar door, and now it was nothing for him to open it...

From that night on, the Kranzedan has never been seen again, and even when, months later, his flat was forced opened, no trace of him could be found. The adorable doll's house, however, quickly found a happy new owner when the Kranzedan’s household effects were auctioned off. 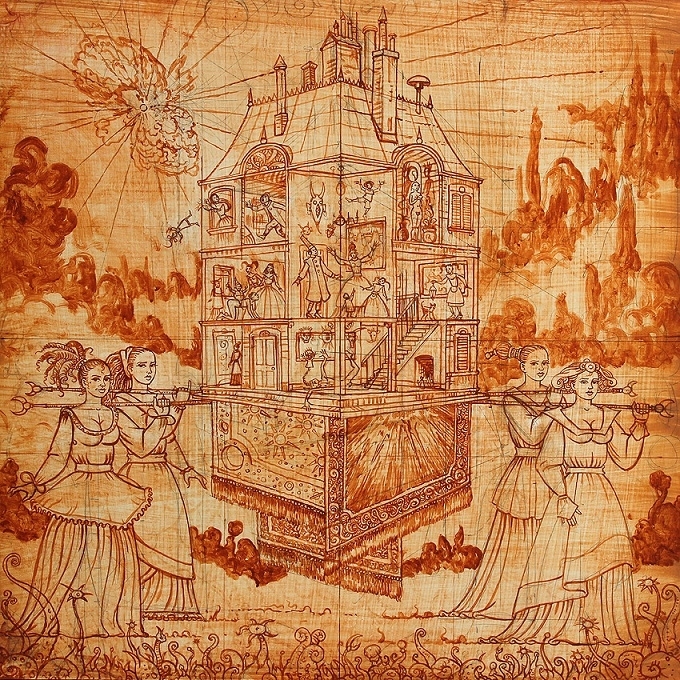 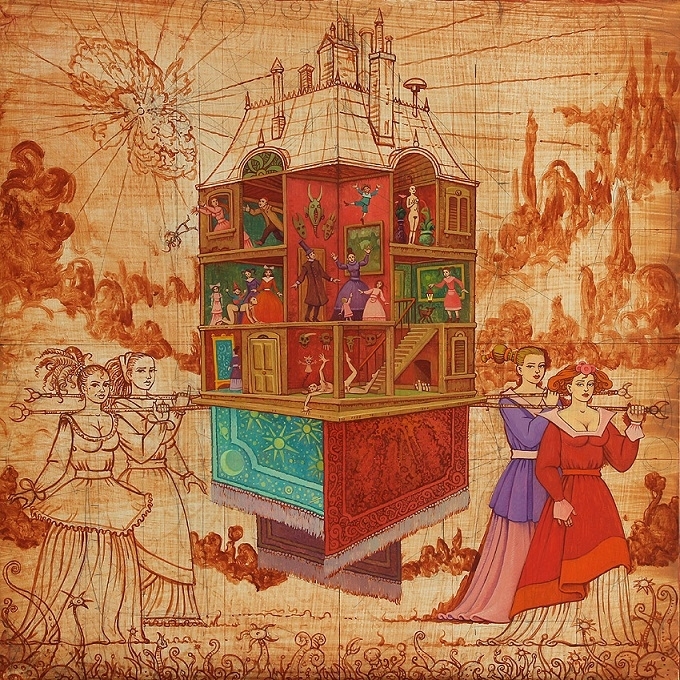 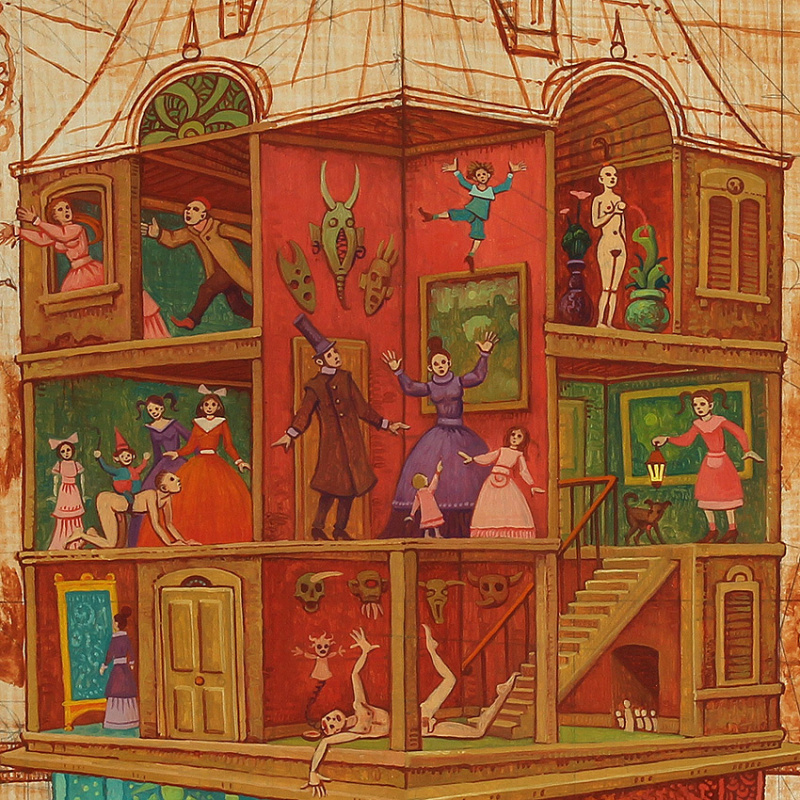 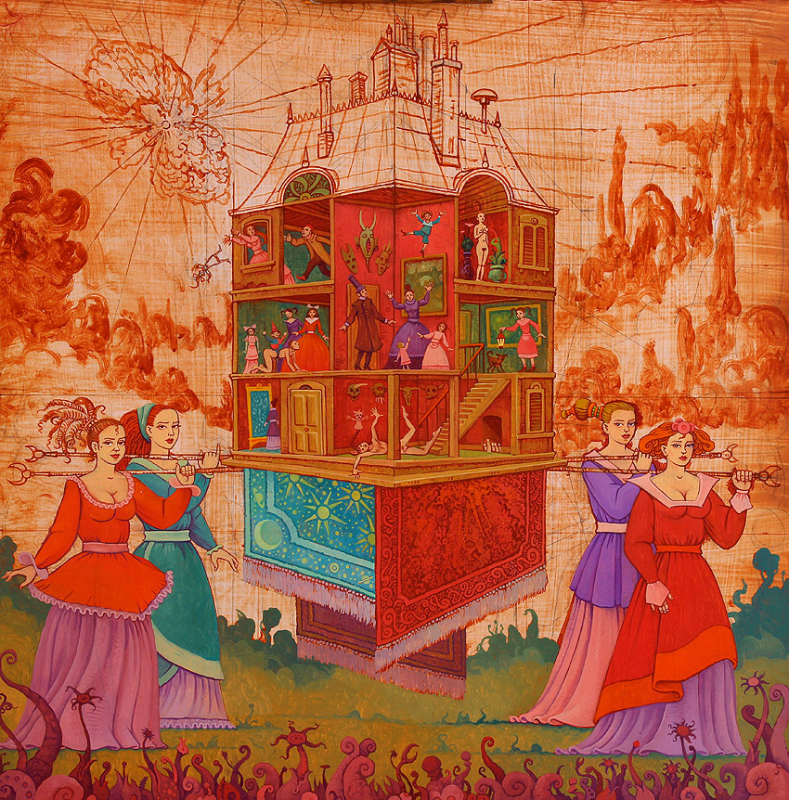 Fig.5. At this stage the artist started to apply the first layer oil color.

Day and Night at the Zoological Gardens

On another occasion the Kranzedan visited a zoological gardens. The whole day long he strolled idly about the grounds, visiting the various menageries and admiring the exotic plants in the well-kept gardens. He rested by the shores of an artfully constructed lake, brimming with multi-coloured water-fowl.  Towards evening, as the gardens were about to close, he came upon a building identified by a signpost as »The Lemur House«.

It was fashioned in a most marvellous manner, resembling an Indian mandir; sumptuously decorated with ornament and sculpture. And, beneath a dome, elevated by mighty pillars, there was a verdant garden, constructed as an impenetrable jungle. However, there was not a single simian to be seen! Disappointed, he addressed himself to a keeper, seemingly busy with some errand, complaining that the place was devoid of animal life. The buxom young woman declared that there were indeed animals all around, that the place was actually teeming with them, they just happened to be nocturnal creatures, remaining holed up during the day to emerge from their hiding places in the darkness of the night.

That night the Kranzedan returned in secret to the zoological gardens. Scaling the boundary wall amongst the shadows of a corner wrapped in darkness, he crept to the Lemur House. But when he came there the doors stood wide apart and standing in the entrance was the very same keeper with whom he had spoken that afternoon. In each hand she held a bucket and upon her feet she still wore a pair of green wellington boots. But, as for the rest, she was, as far as the Kranzedan could discern in the dubious light of the waning moon, utterly naked. Quickly he scurried away and attempted to conceal himself in the bushes, but she had already noticed him. However, instead of berating him for breaking and entering, she simply smiled and disappeared inside the Lemur House.

The Kranzedan followed her into the darkness and the screeching of the monkeys never to be seen again ... 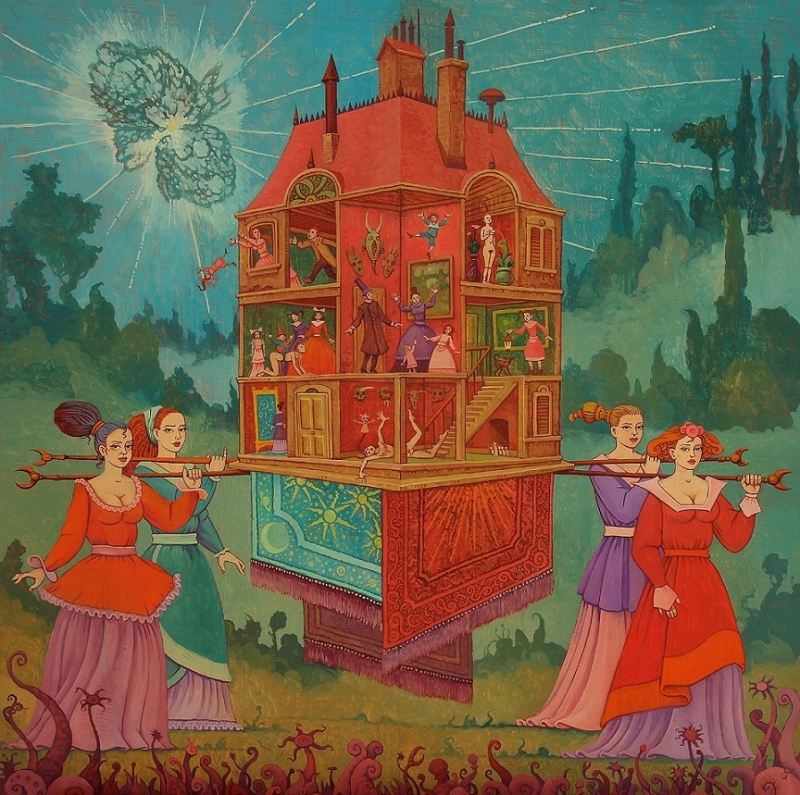 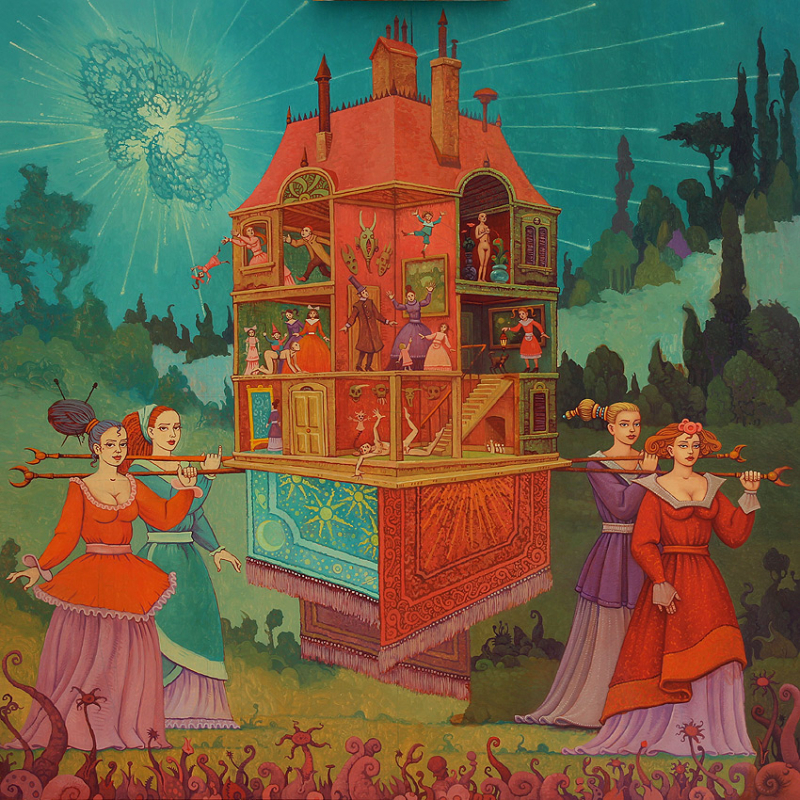 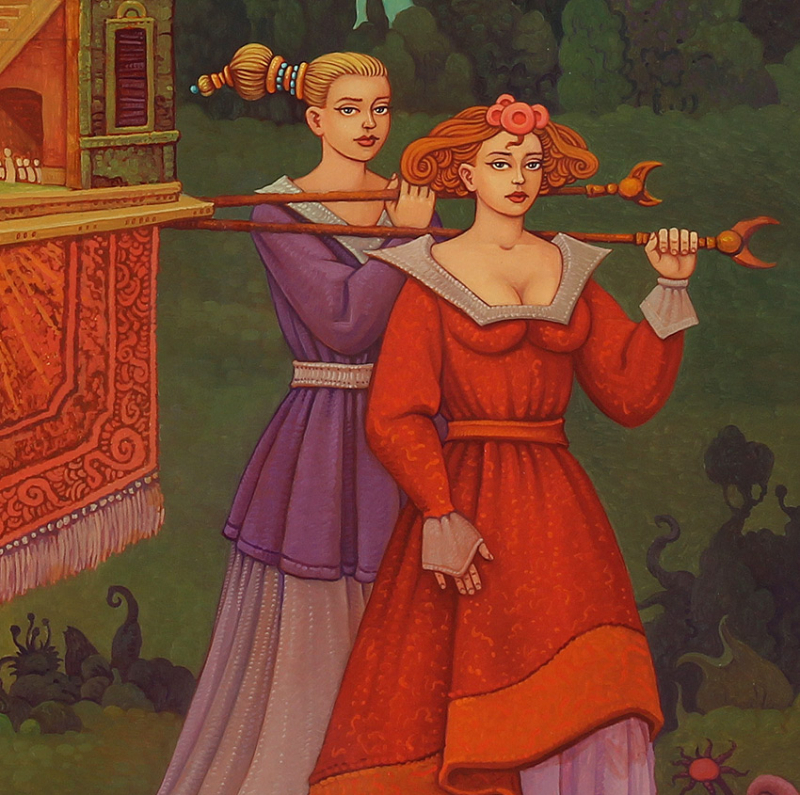 In the same year Hutter also produced a similar painting with references to other stories... 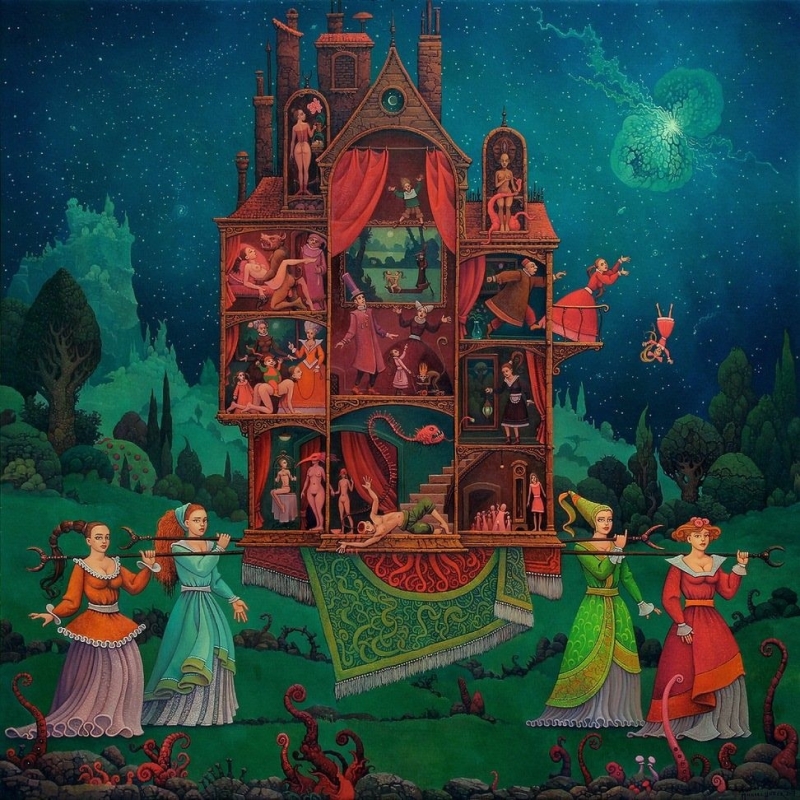 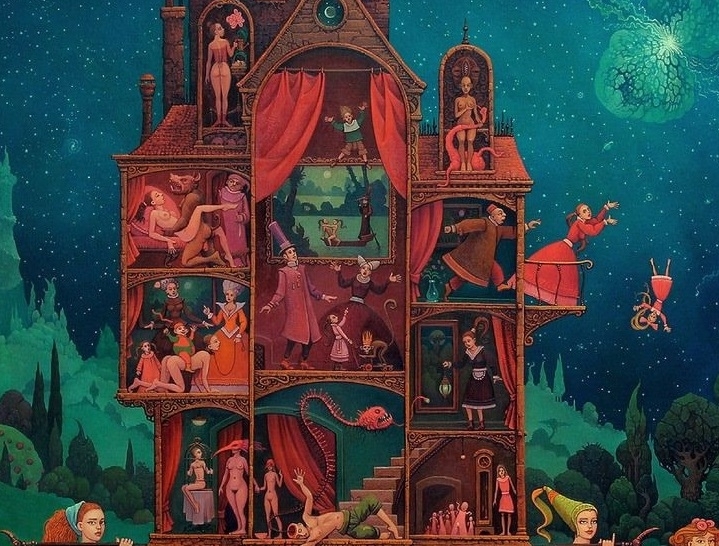 The Kranzedan’s search for the Museum of Extraterrestrial Cultures had, at last, led him to a small town, secluded high up in the mountains. The town was supposed to be abandoned soon after, and in the following days and weeks, whilst the Kranzedan sought in vain for the museum, the citizens were steadily leaving.

That is how the Kranzedan came to be sitting in the station building, shivering with cold and disappointment, waiting for the train that would take him and the last of the inhabitants down the mountain.

Then a curious little man, whom he had not seen before, came to him and offered to lead him to the museum that he was looking for.

The Kranzedan, however, shook his head sadly and said that it was too late now, the last train was about to arrive, and he had to leave. And indeed, the chugging of the engine could already be heard in the distance. The Kranzedan watched as the train came around the last corner and started to cross the stone viaduct that spanned the deep abyss that separated the town from the outside world. Mesmerized, he watched on as the engine swerved from its rails and, pulling the carriages with it, plunged, crashing and screeching, into the deep.

And when the noise had died down, the little man asked once more whether the gentleman would like to accompany him to the museum, now that the train would not be arriving. The Kranzedan took a long look at the smoldering debris, deep down in the gorge, then went with the stranger, never to been seen again.

The stories and the mages were kindly provided by Michael Hutter. Original art and books by the artist are available in his Etsy store.

Let us know what you think about Michael Hutter's art in the comment box below...!!