Top 22 Comics From The Issues of Iconic Bizarre Sex Magazine, Part One

Besides being unpredictable and turbulent, 2022 is also the year of the fiftieth anniversary of the Bizarre Sex magazine, launched by Denis Kitchen in 1972 and issued until 1982. Once you've stumbled across the covers of these issues, it's hard not to try to find out what is hidden under the first page. Not fighting the temptation, we've looked into all Bizarre Sex issues and selected the best comics for you to enjoy. The top we introduce already consists of over-the-top examples, yet, to our taste, the highest places are genuinely la creme de la creme. 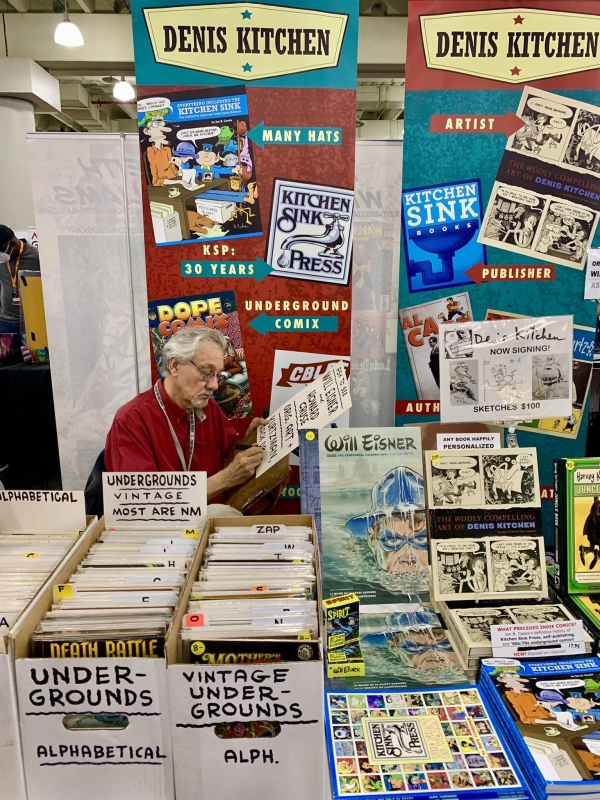 Treasures From The Kitchen Sink

But first, let us tell you a thing or two about the origin of this rarity. Bizarre Sex was issued by the Kitchen Sink Press publishing company. Its founder, artist Denis Kitchen (b. 1946), is a prominent figure in the underground comix movement. Inspired by Crumb's Zap Comix, Kitchen made his debut with Mom's Homemade Comics magazine, whose print run of 4000 was sold out in 1970. This successful enterprise gave a start to the Kitchen Sink Press, and Bizarre Sex was one of its' treasures. Now, let's begin the first part of our countdown! 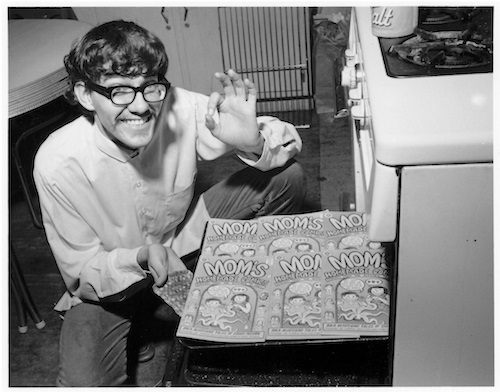 The opportunity to ribbon-cut our amazing top is given to Fred Hembeck (b. 1953) with the amusing one-page strip Sextraterrestrial published in the 7th issue, 1979 (fig. 5). Hembeck is known for his parodies of major comic characters. As one may conclude, looking at the strip, the aliens discovered the pleasures of human sex and decided to multiply the genitals to get double joy. Yet there is a question: if the alien suffers from erectile dysfunction, does it affect only one of his penises?

21. For All Cinema Lovers

Some of the places are occupied by two artists at once as often it's hard to bestow a separate place upon each work of comic art due to their stylistic or thematic similarities. The 21st position is divided between Joel Beck's French Erection from the 6th issue, 1977 (fig. 6), and Dave Herring's Dirty Old Man (The Adventures of Herman P. Fart, Typical American Senior Citizen, Better Known As Dirty Old Man) from the 3rd issue, 1973 (fig. 7). Both works are one-page strips. Beck's work is presented as "A sexy, intellectual French cartoon strip!", which sounds quite intriguing. French Erection is a rare comic designed for you to stick it in the face of those snobs discussing Godard movies at a nearby table. By the way, Joel Beck (1943-1999) was a pioneer of underground comix as his Lenny of Laredo was the first u-comic book on the West Coast. Beck's remarkable works will be mentioned here quite often. The second strip is devoted to the man who prefers watching to participating. Although what he watches is not Godard, his adherence to the front-rank cinema technologies makes him a true lover of art (as known, the porn industry is always ahead of time).

The 20th place belongs to the deck designed by Jay Lynch and Justin Green, which was published in the 3rd issue (fig. 8a – 8d). The Old Maid is a Victorian card game with one card removed from the deck, so another card of the same rank is left without its' match. Players exchange cards and discard matching pairs, and the one who holds the "Old Maid" card loses the game. In standard decks, players often remove three queens, and the Maid is one left. The actual deck already contains an Old Maid card. Some cards depict recognizable cartoon characters like Popeye Sailor. Yet the surreal sex of cartoons is not the only thing for which we included the deck in our top. As it's written on the spread, "the cards are printed back to back, so you'll need to buy two books to clip a set. And you need a pair of each card (except the old maid) to play the game, so you'll need to buy four books. And collectors will need a fifth (uncut) edition to stash away. (That's how we play the game.)" Well, their commercial genius deserves respect!

19. If Sada Abe Were A Fisherman

There is another Joel Beck one-page strip published in the 6th issue (fig. 10). And, according to its' original title (Sex And The Single Dinasour), the comic is devoted to the problems of dinosaur copulation and not to the hybrids of humans and prehistoric creatures as you may suggest from our intentionally misleading heading. Well, dinosaurs did have sex until the big bang with an asteroid happened. Yet the strip shows their awareness of homosexuality, which allows us to suggest the real reason for their extinction. What if God saw his beloved Triassic children sodomizing each other and sent the space rock to wipe the planet clean, so the case of two ancient cities wasn't the first in the world's history?

17. Material Girl in A Cartoon World

The next comic Warla In Wonder World In "Prisoner of the Arab Slavers" from the 2nd issue, belongs to Richard "Grass" Green (whom we'll see further) and Sam Sorig (fig. 11a – 11h). As follows from the comic, Warla is an ordinary girl trapped in the cartoon universe (in fact, she's drawn a little more realistically than the characters surrounding her). Wandering in a cartoon desert, she gets caught by cartoon Arabs who throw her into a dungeon where other enslaved females are forced to make love with guards for food. Starving males in the next dungeon don't get any food, so this story is the opposite case when homosexuality could actually save lives if some Arabs happened to be gay. Warla helps the women to get into the males' dungeon, and the hunger turns out to be sex starvation as the men find the energy for an orgy. Almost like Cupid in Apuleus' story, Warla revives a man who knows the way out, but she does it not with a kiss. The comic makes us wonder whether Green had seen Chinese and Japanese woodblock prints where vaginal fluids are presented as medicine. Probably, Hokusai's hungry octopi could be an influence as well...

The following place is occupied by Dan Steffan's Deviate's Delite from the 7th issue (fig12a – 12c). Dan Steffan is an American caricaturist who began his career in the 1970s by contributing to u-comix magazines. The story is about an ordinary guy in his fifties stumbling across a "massage parlor." Though he is kicked out after saying about the stiffness in his back, who knows, maybe he got this stiffness having tried to imitate some shunga poses (never say never)? As they say in Japan, 'the foolish couple copy shunga and pull a muscle.' By the way, in the 2000s, Steffan contributed to an e-zine entitled Chunga.

This time, we have two comics again: the first, The House of Ill Repute by Fershid Bahrucha (actually Bharucha, b. 1943), is from the 3rd issue (fig. 13a – 13c), and the second, a one-page strip of J. Michael Leonard Neimus The Necrophilist was published in the 8th issue, 1980 (fig. 14). Though we've spoiled the intrigue of the first piece, which wasn't really big, there are still some questions we offer you as compensation. For instance, why had the client chosen the passive girl? If the question was about the price (there is a bit of curiosity, but majorly the price), then the comic confirms that people are always ready to buy two shits at a price of one, although they wouldn't need this stuff in another case. We mean, the client would barely be satisfied with fucking a "log" (though a beautiful one) even for free, but now he pays for it ten bucks and walks away completely pleased because it's twice cheaper... Devoted to the shy guy who tries to communicate with a dead girl, the second strip raises in our mind a question of whether two necrophiles could fall in love with each other on the ground of common interests. Though Gabrielle Wittkop claims it doesn't happen, we hope for the best. Dead girls apparently can't say 'no', but they can't say 'yes' as well, which must be far worse.

My Heart Skipped a Beat for a Meat-Beating Fiend is a tragic story of Joe Cutrate about unrequited teenage love, printed in the 2nd issue (fig. 16a – 16c). The girl falls in love with a 'jack-off artist', which is pretty expectable: firstly, he is an artist, and, secondly, his art is among the most dangerous as he will definitely go blind in the end (he wears glasses already). Since ancient times, we know that all masturbators are punished by God for wasting semen and damned by people as they threaten our existence. If the art of masturbation develops further, we will vanish like dinosaurs, who, as Joel Beck showed, perished because of their homosexuality. Nevertheless, young girls love bad guys the most, so we understand you, Bonnie Roth!

Fig. 16a. Joe Cutrate, My Heart Skipped a Beat for a Meat-Beating Fiend, Bizarre Sex №2

Fig. 16b. Joe Cutrate, My Heart Skipped a Beat for a Meat-Beating Fiend, Bizarre Sex №2

The Vegetable Lover story by Michael T. Gilbert and Mary Gorden was printed in the 8th issue (fig. 17a – 17h). This grim variation of Richard Green's Warla reviving a man with her pussy was included in our top as a loose association with von Trier's Breaking the Waves movie, though it would be released sixteen years later. Strictly speaking, this short story opposes the plot of the movie, where the girl is forced into prostitution by her diseased husband, who thinks her sexual pleasure may help him to recover. The girl in the graphic story, on the contrary, makes love to her patient in a coma. The man in the movie is presented as a kind of voyeuristic vampire who actually gets on his feet when the heroine dies. From this point of view, the Vegetable Lover is still von Trier in a nutshell because the girl goes crazy after what she's done to the man while the patient miraculously awakes because of her manipulations.

...and, not to finish the first part of our top on a sad note, we've prepared you a bonus: a back cover of the 8th issue of Bizarre Sex depicting Little Nemo, who tells Betty Boop about his most wet dreams...

You can check out the second part on the following page.

What is your favorite comic from the issues of Bizarre Sex Magazine? Leave your reaction in the comment box below?