Loathsome Monsters and Lascivious Battles In the Engravings of John Mortimer

This time we’ll take a look at something truly spectacular, both captivating and repugnant. Engravings of the British artist John Hamilton Mortimer (1740-1779) are definitely capable of catching your eye. Francisco Goya showed us the monsters produced by the sleep of reason, but Mortimer’s creatures sometimes can beat even maestro’s fantasy. 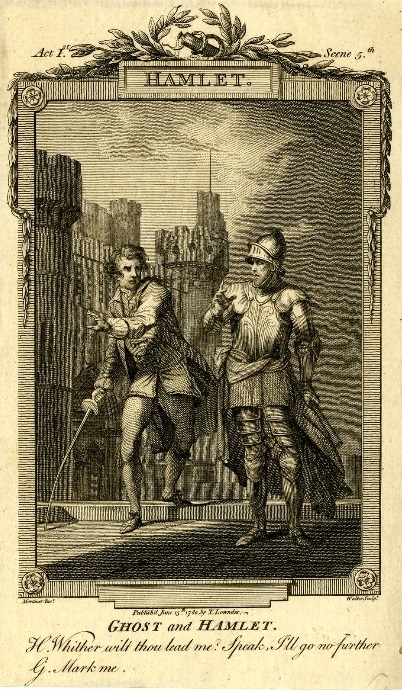 Fig. 2. The first act of ‘Hamlet,’ print made after Mortimer’s design in 1785 (britishmuseum.org) 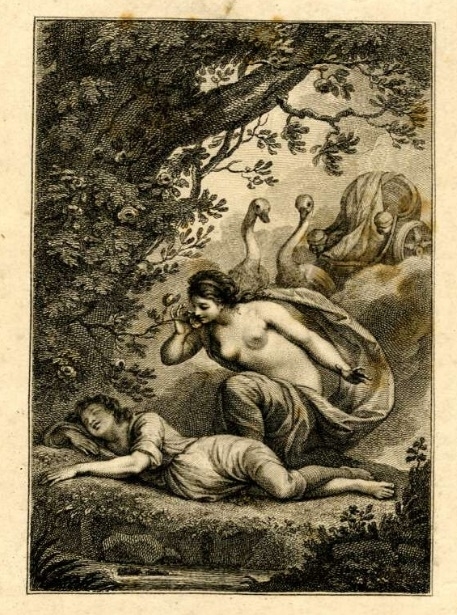 Fig. 3. Venus kissing a rose above the sleeping boy, illustration to ‘Kisses, a poetical translation of the Basia‘ by Joannes Secundus (London: John Bew, 1778, britishmuseum.org) 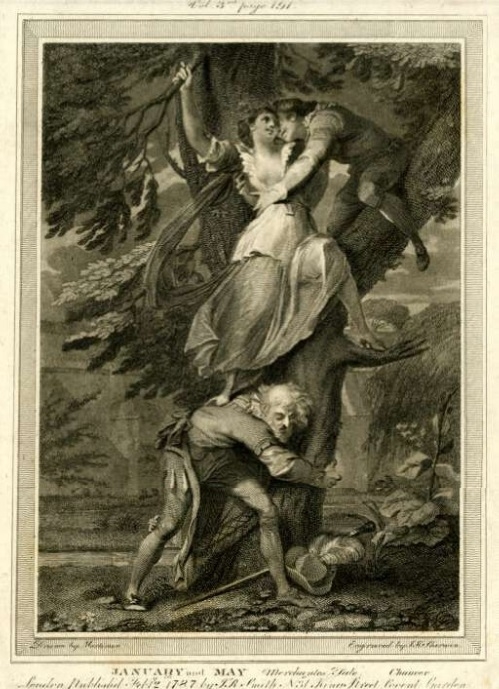 Fig. 4. Allegory of January and May, Illustration to Chaucer’s ‘Canterbury Tales‘ (Merchant’s Tale); print produced in 1787 after Mortimer (britishmuseum.org) 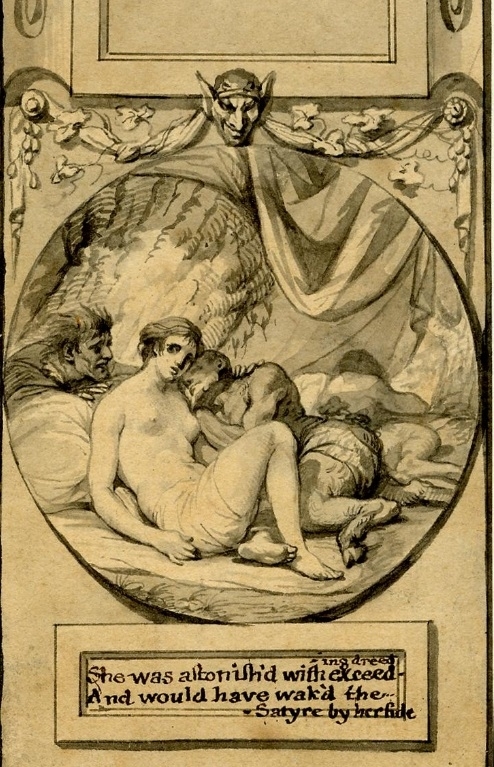 Fig. 5. Frontispiece to Spenser’s ‘The Faerie Queene‘, Book IV, Canto X 50, from Bell’s Edition of “the Poets of Great Britain complete from Chaucer to Churchill“; Malbecco at right finding Hellenore sleeping with a satyr. «She was astonishe’d with exceeding dreed/ And would have wak’d the Satyre by her side.» 1778, britishmuseum.org

John Mortimer, who died for unknown reasons at the age of 38, left us a peculiar legacy. He was a British painter and printmaker depicting pastoral and battle scenes. Born in a wealthy family of a customs officer, Mortimer began his fine arts studies at the Duke of Richmond’s Academy in London when he was seventeen. Then he enrolled at the St Martin’s Lane Academy, where his teachers were Cipriani, Robert Edge Pine, and Sir Joshua Reynolds. To the latter, Mortimer would devote the set of 15 engravings depicting pastoral scenes, allegories, and sea monsters, which are involved in various activities. Being 19 years old, the artist won a prize for a study after Michelangelo. Since the 1760s, Mortimer had exhibited his works regularly and became a member of the Society of Artists. Afterward, he was elected the president of this association. Mortimer’s works can be distinguished by their explicated masculinity. His engravings often depict captivated women and brutal bandits. The theme of brutality was emphasized in the bestial engravings of the set devoted to Joshua Reynolds. Mortimer produced the series in December 1778, when he was elected a member of the Royal Academy, founded and presided by Reynolds. 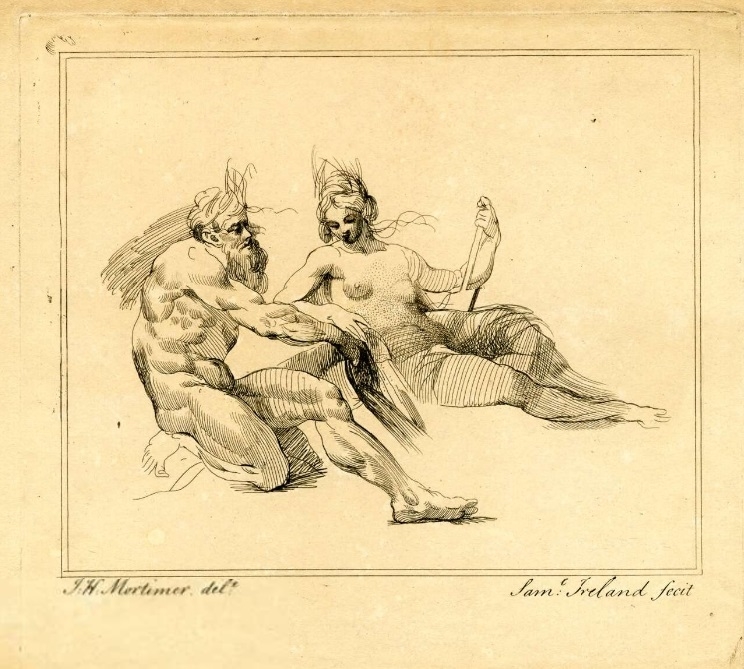 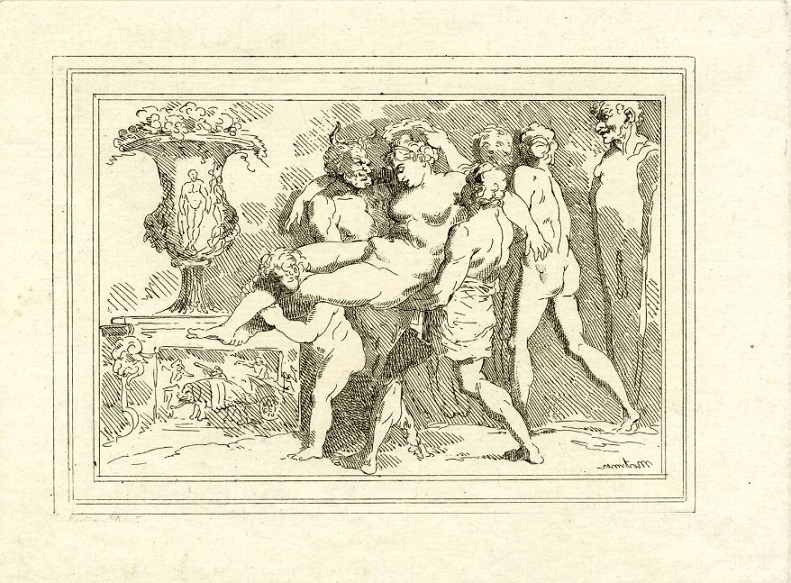 Fig. 8. Bacchanalian scene, figures carrying a woman to left, one crowning her (britishmuseum.org) 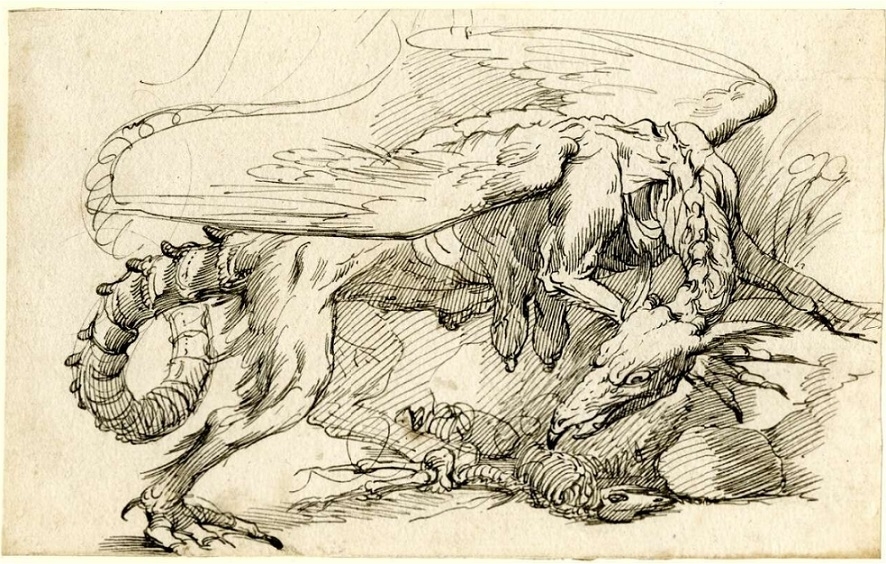 Fig. 9. Griffin striding over skeleton of a lamb. 1770s (britishmuseum.org) 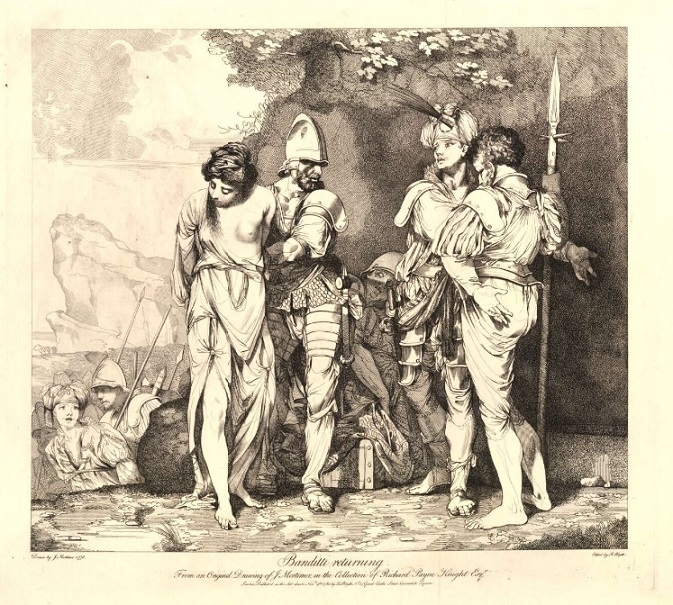 Though the prints of scary sea creatures, together with preparatory drawings, count nine or fewer pictures, they are still very entertaining to look at. Half-humans with expressive, somewhat Lovecraftian appearance live a tumultuous life: they wrestle against each other in the water, fight over beautiful maidens, copulate with them, and play panpipes in time of rest. The prints have titles “Jealous monster,” “Revengeful monsters,” “Musical Monster,” and so on. There is the curious one among these titles, “Successful Monster” (fig. 16) The print depicts a monster going to kiss a nymph who doesn’t seem to resist. This scene proves that sometimes tritons and satyrs didn’t have to be rapists. The striking contrast between fragile young women and marine beasts with their tails and scales inevitably attracts the viewer. Another interesting picture is a preparatory drawing for the print depicting two sleeping monsters, apparently, male and female (fig. 17). The scene is repulsive, yet strangely peaceful as if we looked at two resting lovers in an idyllic setting. Some of these prints indeed can be described as the ancient idyll seen by Goya. 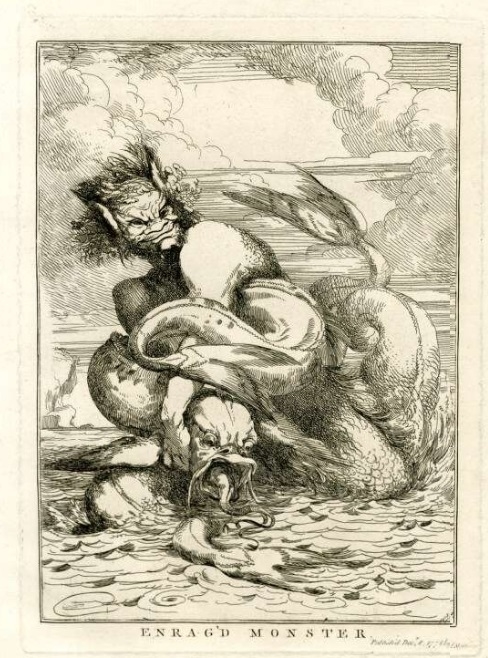 Fig. 11. ‘Enraged Monster’ (well, he is rather satisfied with his victory, than enraged), fifteen etchings dedicated to Sir Joshua Reynolds, 1778, britishmuseum.org 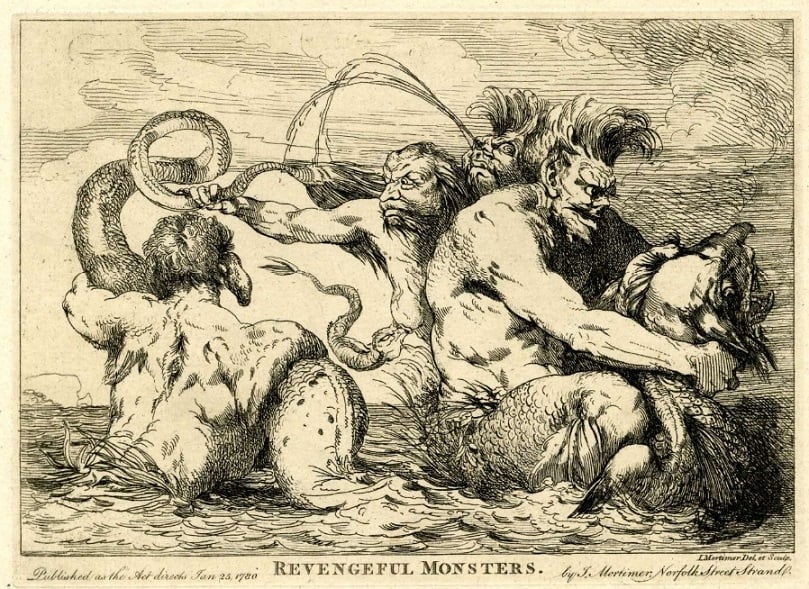 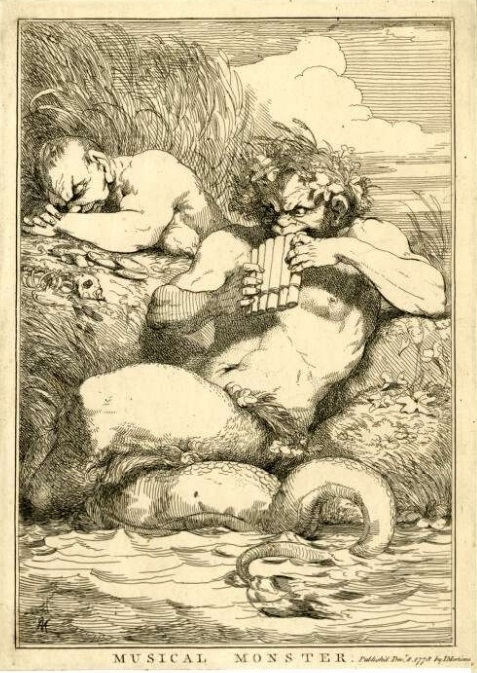 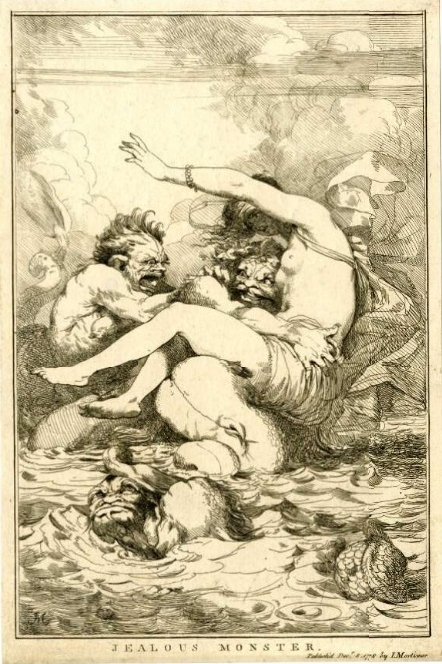 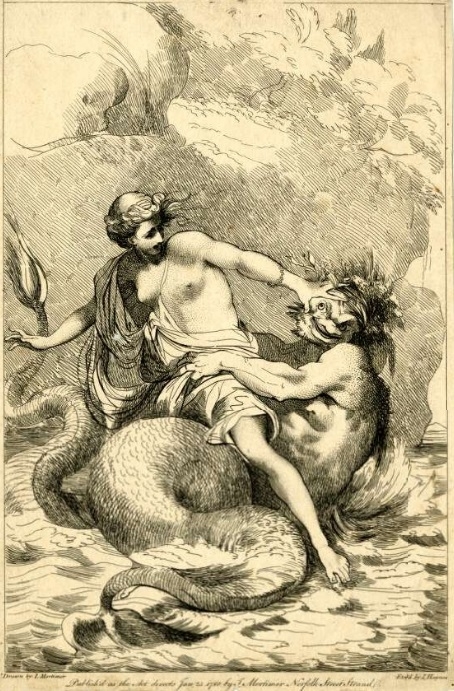 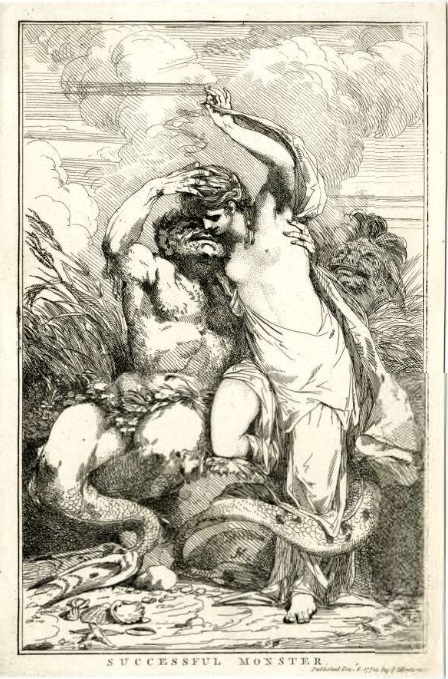 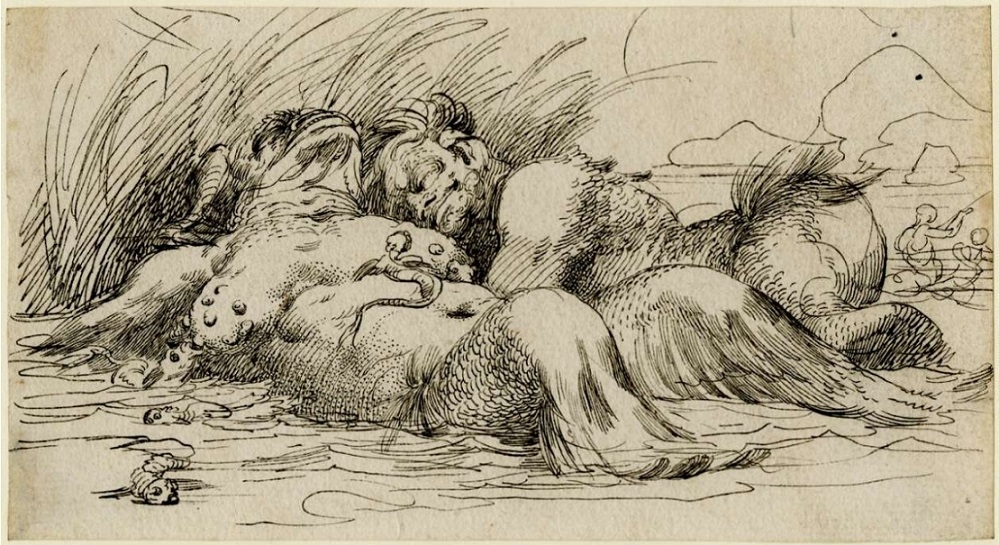 Speaking of John Mortimer, it’s impossible not to mention the caricature part of his legacy. One of the most remarkable of Mortimer’s caricatures is ‘A Trip to Cocks Heath,‘ published by William Humphrey in 1778. The picture represents the British village Coxheath turned into a military camp during the American War for Independence by the end of the 1770s. Even though masculinity was a leitmotif of the artist’s works, here we see the dominance of feminine libido. The print was allegedly inspired by Sheridan’s play “The Camp,” describing preparations of British people to defend their land against French invasion. The fact that Mortimer was considered for election to the Royal Academy and worked on the 15 etchings of monsters and allegories at the time of this print’s production, makes his authorship doubtful for some specialists, e. g. for Jim Sherry, who attributes it to James Gillray. Nevertheless, the piece has traces of the profound influence of Mortimer’s pictures. 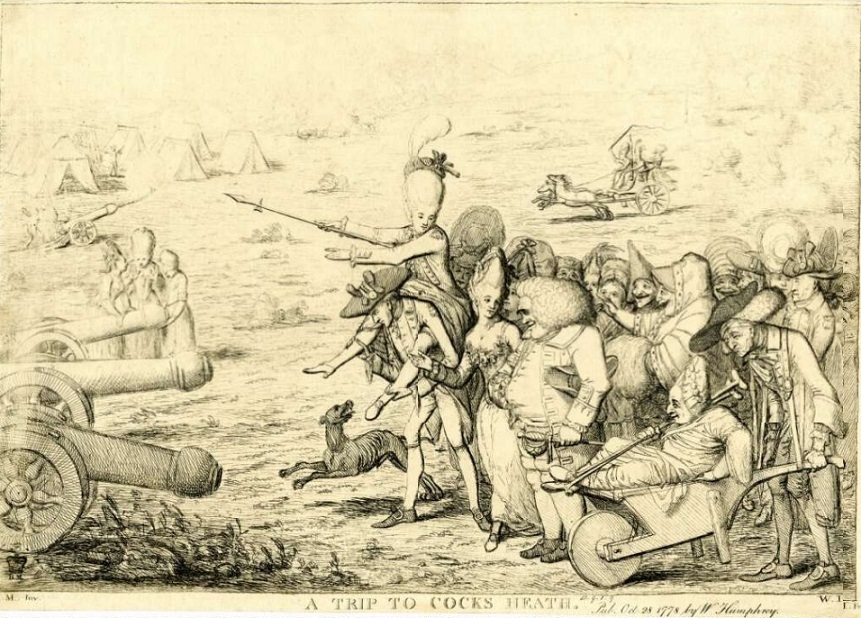 We’re curious to know your thoughts on the engravings of John Mortimer so leave your reaction in the comment box below….!!

A Conversation with the Illustrious Founder of Whores of Yore, Dr. Kate Lister
27 juni 2022