None of the spirits from Japanese mythology was so sinister and evil as the kappa, although he sometimes showed his benevolent or even protective side. The kappa was known as the creature who always kept his word. To its appearance or behavior this reliability is not immediately clear. A kappa has the physique of a child, so one says, but the childlike innocence is absolutely not present.

The kappa crawls from rivers, lakes, and pools to drink the blood from people or cattle, through the anus. The mounted anus of drowning victims was often attributed to him. When travelers were forced to pass river banks, they walked faster to escape the attention of a hungry kappa.

The slimy (sometimes scaly) skin of the kappa has a green yellow color, he has webbing between his fingers and toes and a cavity on the top of the head. The fluid in this cavity represents its force, and the kappa weakens right away if something is spilled.

Book cover for ‘A cup of Salt Tears‘

There once was a kappa who was less ugly than his ilk; with some goodwill he could even pass for a human child. Everybody who passed his pool he challenged to play a game of inky-pinky and almost everyone was amused by this “little boy” and took up the challenge. Their laughing stopped quickly when he appealed to his superhuman strength and carried down his unsuspected victims into the deep water, where he drained them on the bottom of the river, until the last drop of blood.

So it went from bad to worse, and finally the villagers gathered together to discuss what to do. One man promised that he could redeem this pest, if he could borrow a strong and quick horse. He rode to the shore and encountered the so-called “little boy”. He obeyed the kappa and reached out his finger. At that moment he whipped the horse and shot forward, the surprised kappa lost his balance and was dragged along by the galloping horse.

When the fluid was splashing out of the cavity on the top of his head, the only thing he could do was to beg for mercy to his mortal abductor. If he let him go, so the kappa called, he would learn him to strengthen bones. The rider accepted this offer, and the kappa promised to leave the village alone and educated the man on how to cure bone fractures. Armed with that knowledge the man started a career as a doctor, the first in a lineage of surgeons.

Kappa were said to be responsible for a lot of the drownings in rivers when it comes to small children. They would creep up on gullible victims from under the water and drag them under the water to drown them, as illustrated in this Japanese magazine. 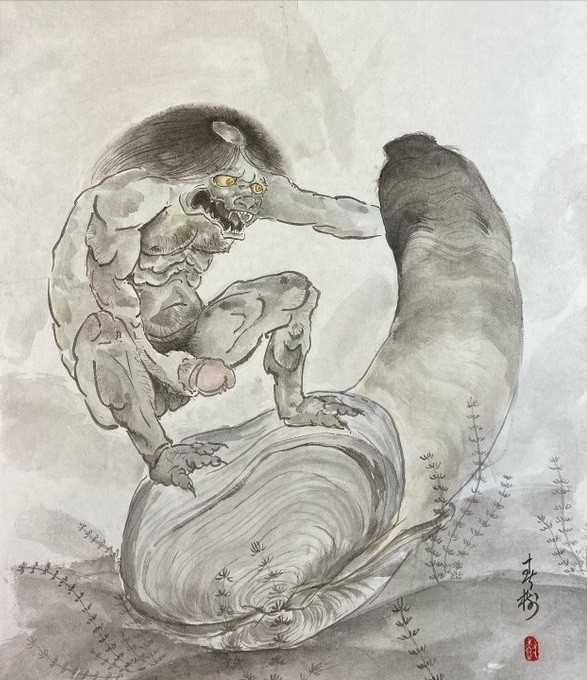 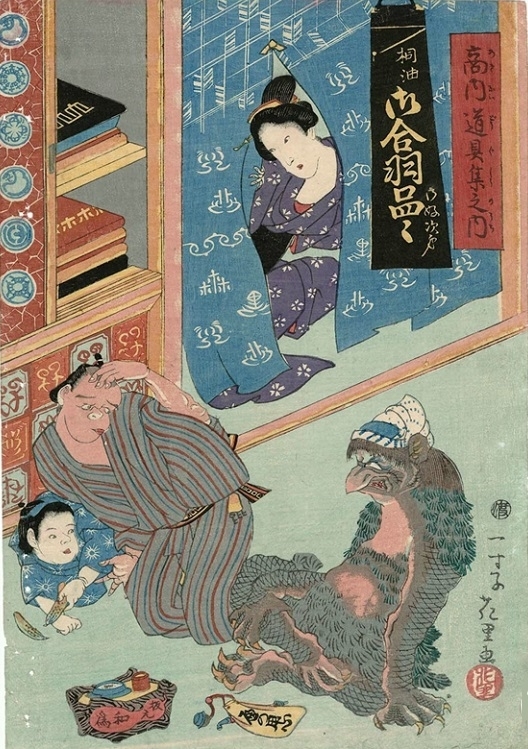 *Click here for more info on the Utamakura design!