The artist who almost single-handedly maintained the great ‘laughter picture’ (warai-e) tradition during the Meiji era was Kawanabe Kyosai (1831-1889). The three paintings below, he produced during a painting party (shogakai) somewhere between 1871 and 1889, are excellent examples of his vital continuation. 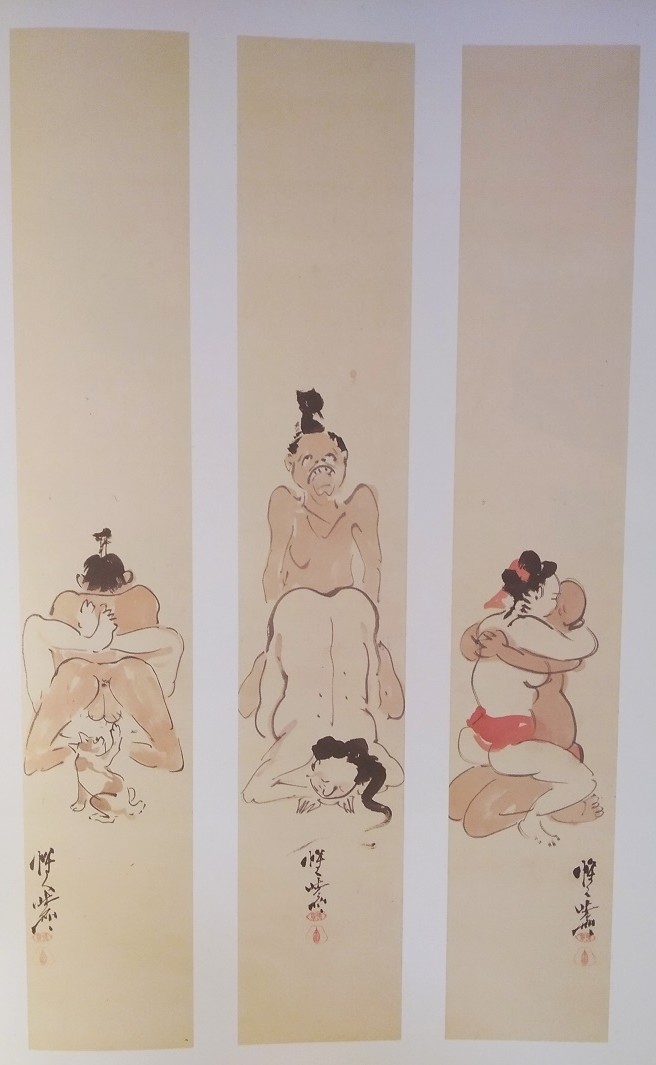 Fluttering lines seem to dance across the paper as they form three droll scenes of various couples in moments of ecstasy. In the first scroll on the right (Fig.2), the set is meant to be read from the right to the left, a stout middle-aged man with a tonsure. or bald head (most probably a Buddhist monk), is coupled with a young woman sitting on his lap. She wears a decorative red cloth (tegara) in her Shimada hairstyle.

On the middle scroll (Fig.3) we see a man who wears courtly headgear (eboshi). His grim look is a hilarious detail. The middle-aged woman with moxibustion marks on her back. The left painting (Fig.4) shows a man with a ‘tea-whisk’ (chasen) topknot who is firmly gripped between the legs of his partner.

Kyosai’s unique wittiness can be seen in the innocent mischief of the cat which shifts the viewer’s attention away from the sex, and allows us to take a step back and see how comical people are, when it comes to sex.

The artist painted three couples from various social classes. body types and ages, each engaged in sex, from different angles (from the front, the side and the back). He has re-enforced the sexual aspect of these paintings in the artist’s seal which has the shape of a vulva (Fig.5). 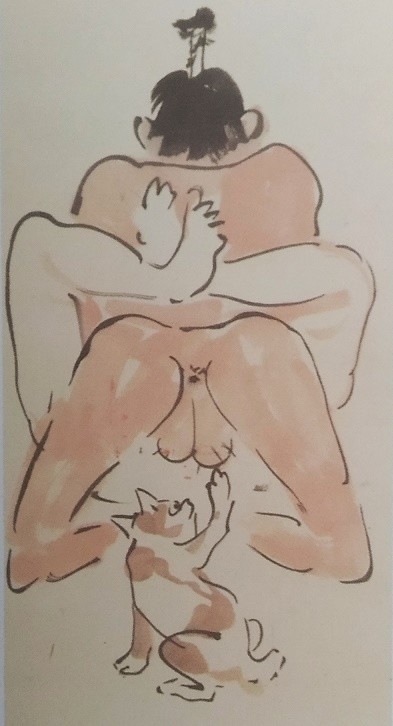 In contrast to the shunga prints earlier in Kyosai’s career, which are filled with background details and layers of opulent kimono, these paintings are characterized by a striking simplicity. There is no background, and the figures are delineated with simple but dynamic lines.

‘Shunga, Sex and Pleasure in Japanese Art‘ by Timothy Clark
‘Sex and Laughter with Kyosai: Shunga from the Israel Goldman Collection‘ by Ishigami Aki and Sadamura Koto

Who is your favorite classical shunga artist? Let us know in the comment box below….!!

Kyosai's Comical Wink to Shoki, the Demon Queller and the Tanabata Stars
04 mei 2021