Polarnography: Between Sky and Earth - The Tearing Erotism of Nobuyoshi Araki

Since his first books, cloud photos have been a constant in Nobuyoshi Araki's work. Unlike Alfred Stieglitz, whose series of cloud photos entitled Equivalences (Fig. 1) refer to the “brute and brutal cutout, not empty, but virgin of any special and explicit sign of a precise exteriority” (DUBOIS, The photographic act, p. 200), Araki provokes interventions in his photos, such as the gesture of writing ideograms, painting or inserting other images in them. In his book 2THESKY, my ENDER (Fig. 2 to 4), we can observe images of the sky with clouds, on which the photographer glues one and, sometimes, two photos of his models tied together using the kinbaku technique (Fig. 5 to 10). 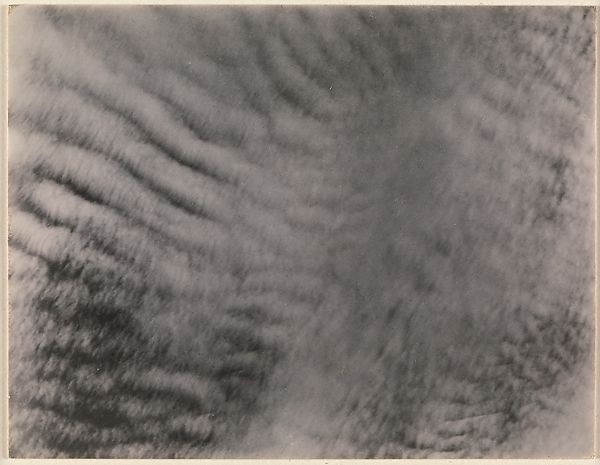 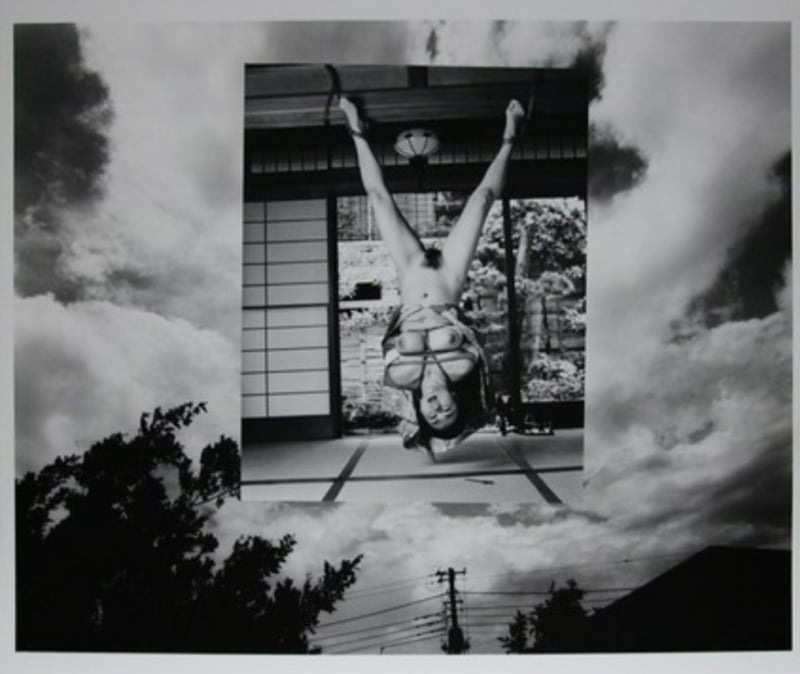 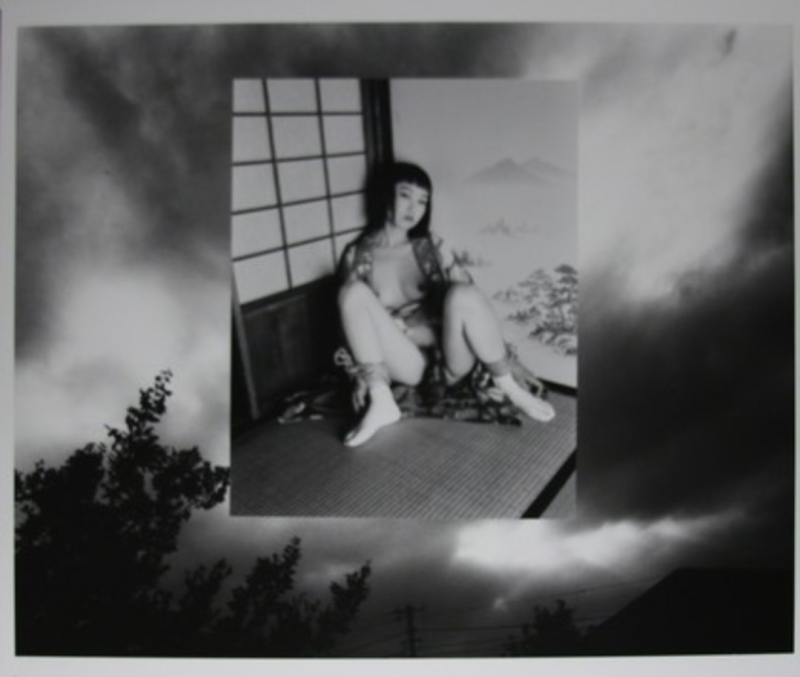 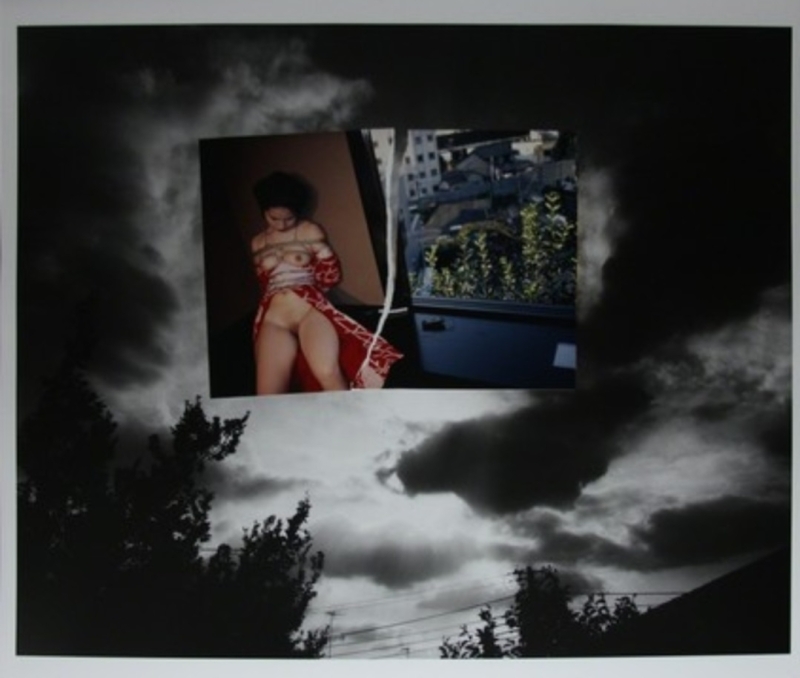 According to the photographer: “in short, I was in a much better mood to paste photos on top of each other than in albums” (ARAKI, Leçon de photo intégrale, 2018, p. 255). Instead of having photos of clouds as a representation of infinity, an expression of a pure cut, as Philipe Dubois wants, Nobuyoshi Araki (Tokyo, 1940) gives us a space where, through montage, part of the image, while being obliterated, receives a new layer image, adding new meanings to it. 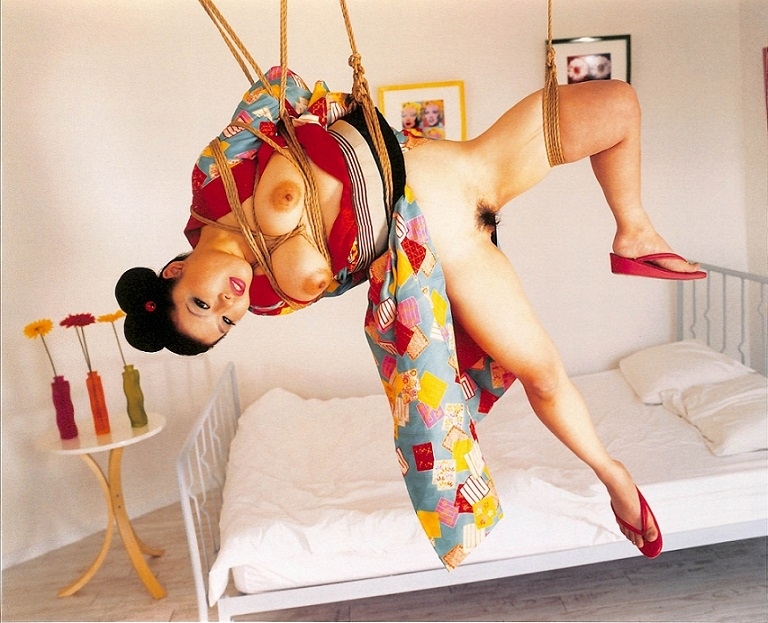 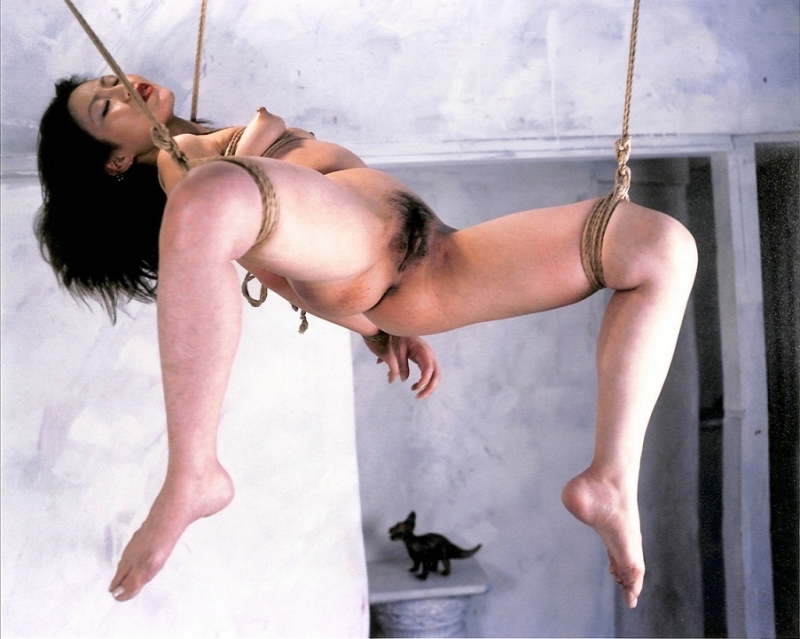 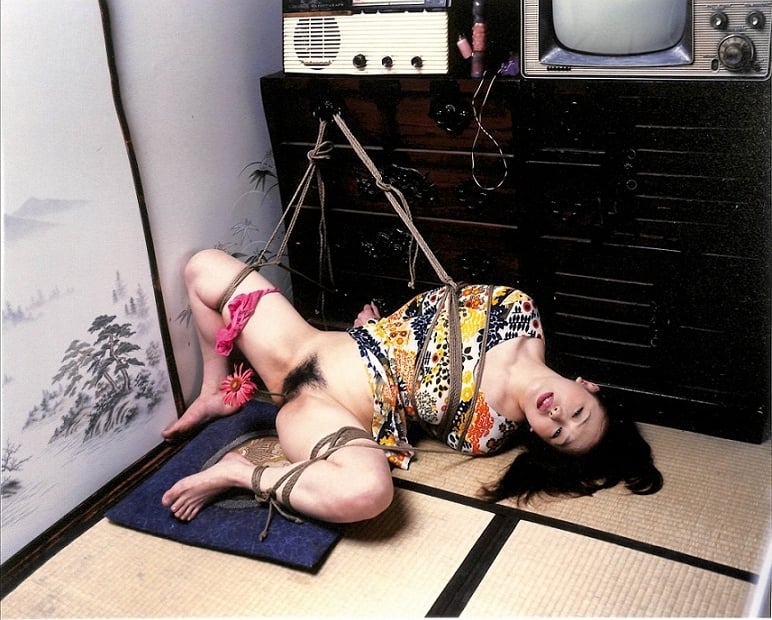 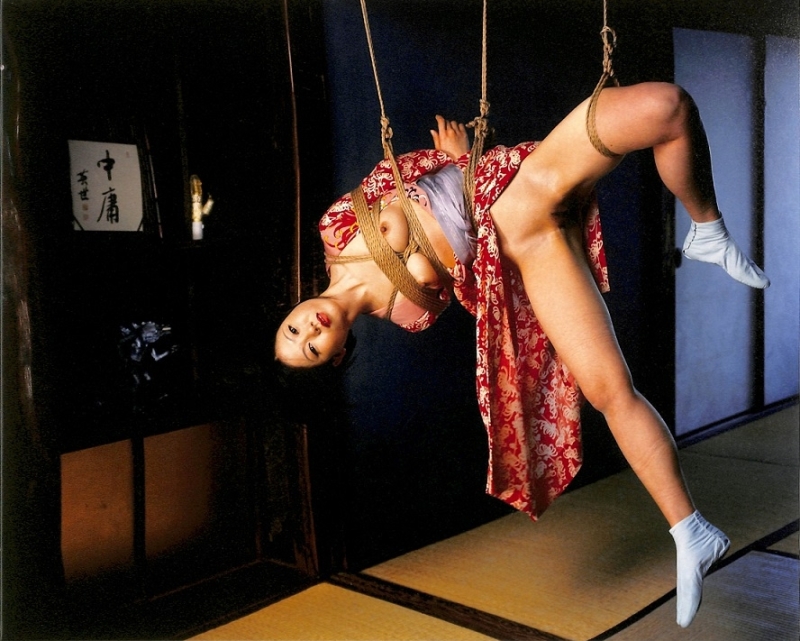 The supposed purity of a cloudy sky is corrupted by the presence of bound female bodies, just as they are by it. The lack of orientation that dominates Stieglitz's clouds, in Araki's photos, does not exist, as they are not established in contrast to the earth, but as part of it, the instant the photographer registers not only the sky, but, through framing, he groups it with elements attached to the surface, such as trees, poles and parts of the roofs of houses. 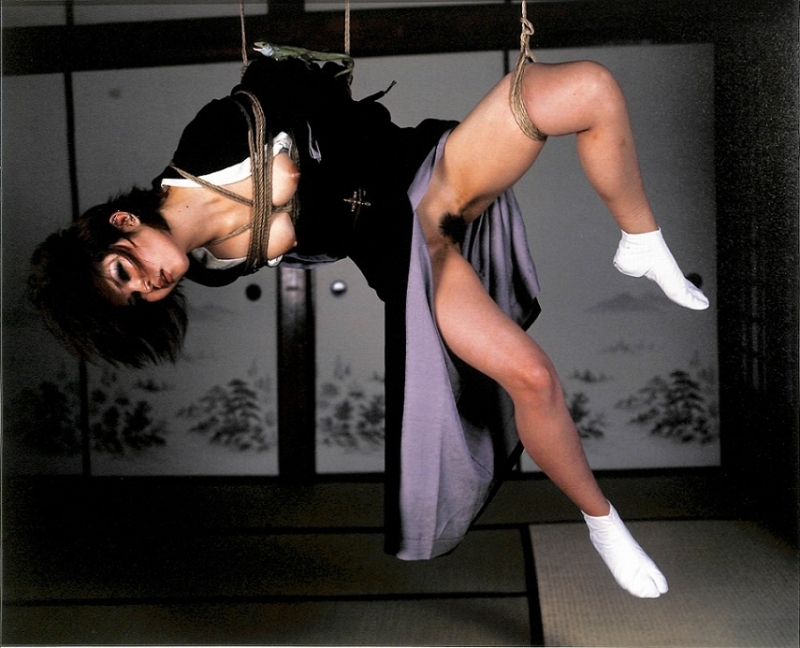 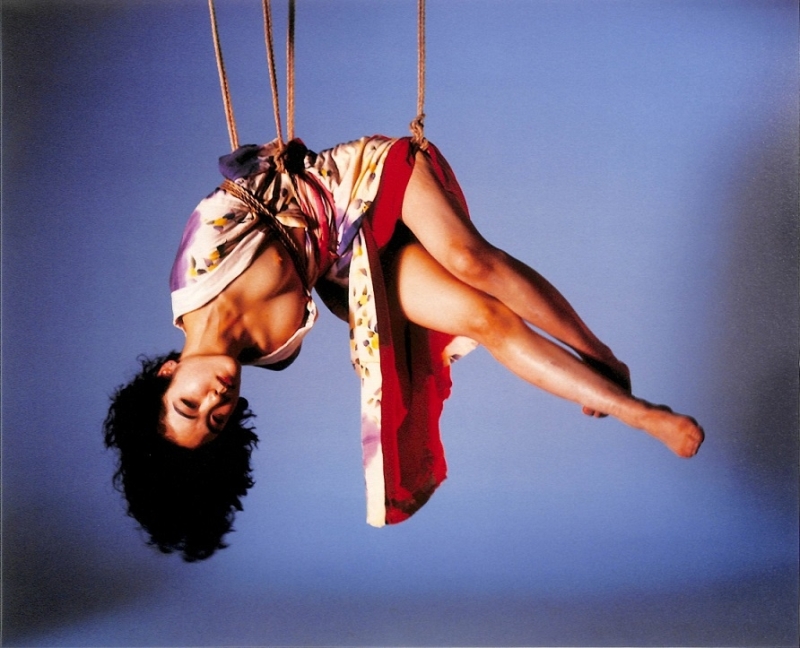 By bringing together the high and the low in the same space, Araki breaks with the concepts that define and separate these spheres. In this sense, since his clouds are not "pure", that is, devoid of references, they somehow merge with the human presence, at the moment when they become a space of subversion, where the low and the high alternate up and coexist. 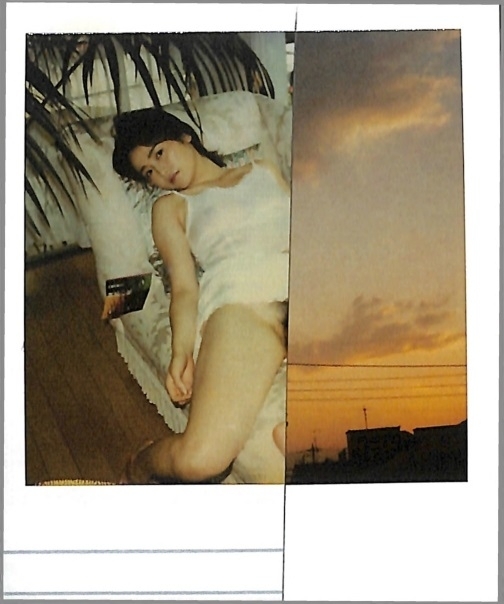 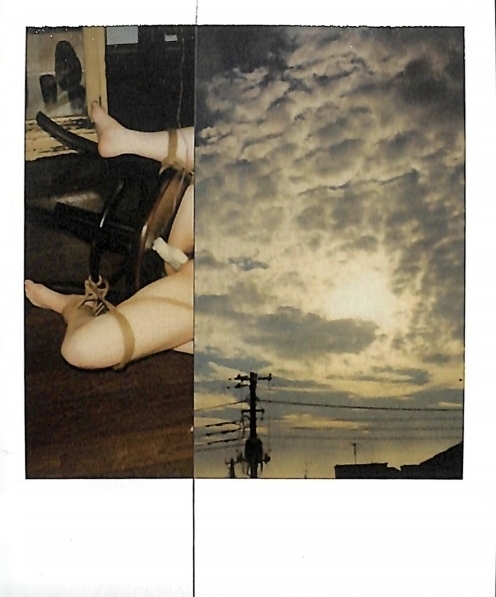 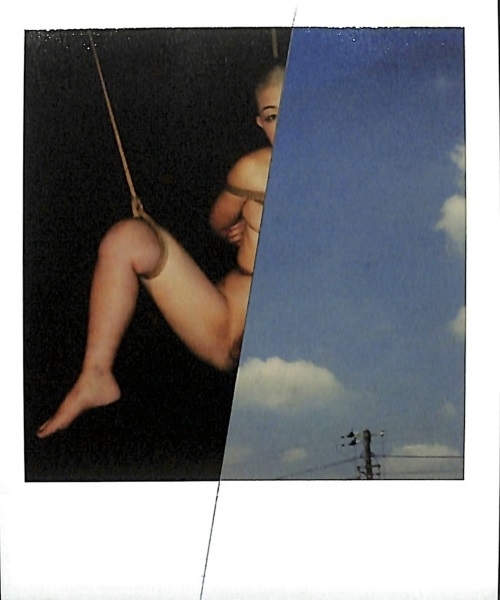 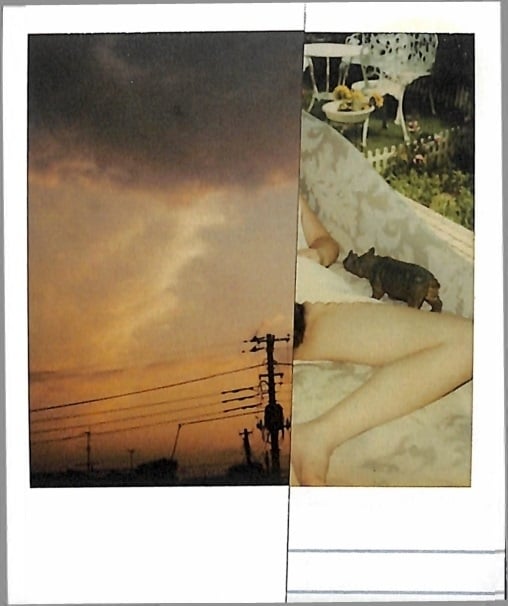 In one of his latest books, Polarnography (2019) (Fig.11 to 25), Nobuyoshi Araki achieves this place of loss between body and space through the montage of one hundred Polaroid photos, whose surfaces are combined from cut images of women and the sky. In this work, we can see that Araki establishes a dialogue between body and cloud, scenery and landscape, based on traces or color tones common to these forms. In some photos, clouds seem to complete a part of the model's body, while there is an impression that it is disintegrating, while in others, a dialogue is created between the colors of the body, the scenery that it occupies and those of heaven. 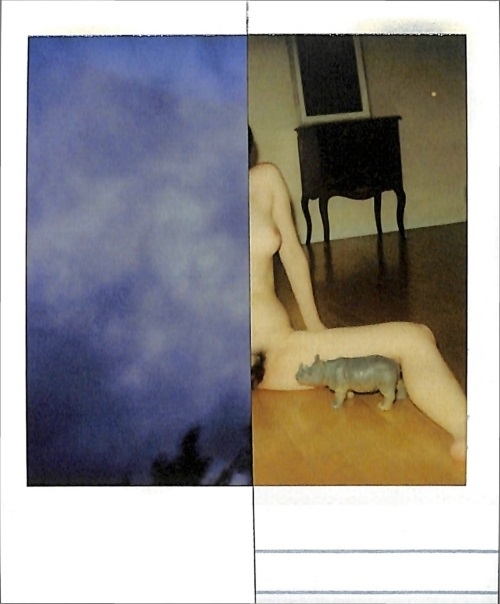 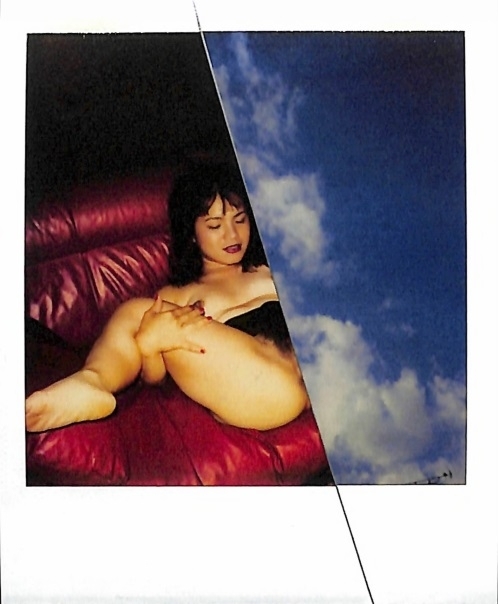 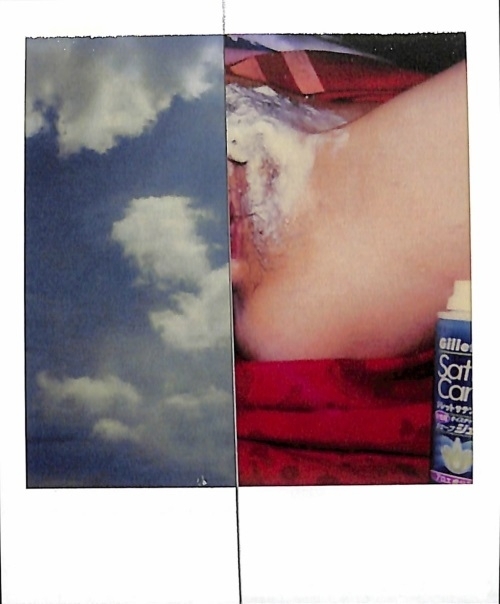 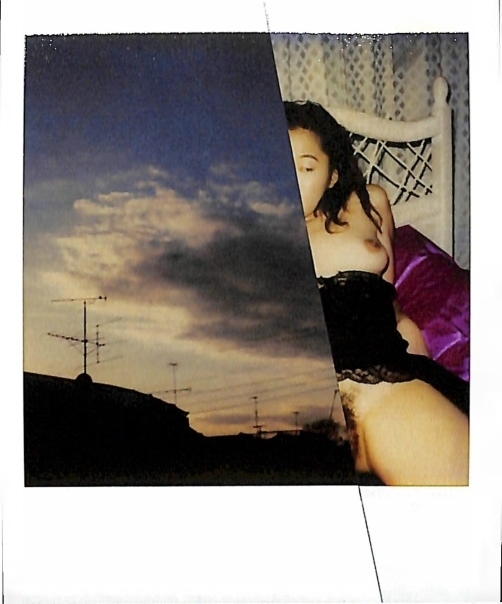 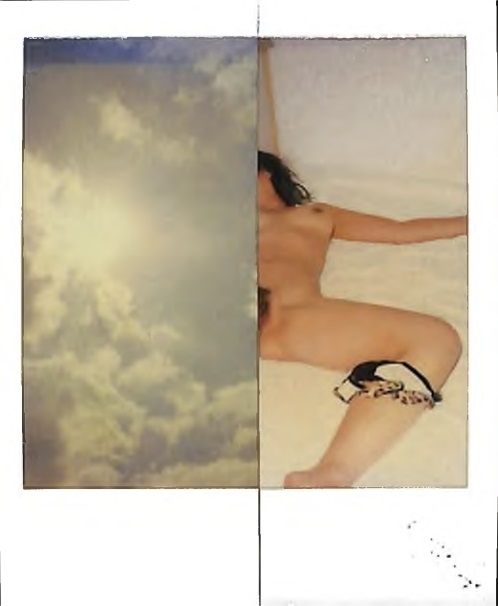 These images, simultaneously, oppose, mirror and complement each other, in a similar way to what Hans Bellmer proposes in a passage from Anatomy of the image:

"Place an unframed mirror perpendicular to a photo of a naked body and slowly tum it or move it forward while maintaining a 90° angle, in such a way that the symmetrical halves of the entire visible area gradually shrink or expand in an even fashion. The image, ceaselessly created in bubbles of elasticized skin, emerges by swelling from the somewhat theoretical fissure of the axis of symmetry. Or, if you perform the movement in the opposite direction, the image diminishes to oblivion, the two halves flowing into each other like warm glue sucked into an irresistible void-like a candle placed on top of a hot stove that shrinks because it silently liquefies at its base, which is also the base of its double reflected in the melted wax." (BELLMER, Little Anatomy of the Physical Unconscious, or The Anatomy of the Image, p. 19) 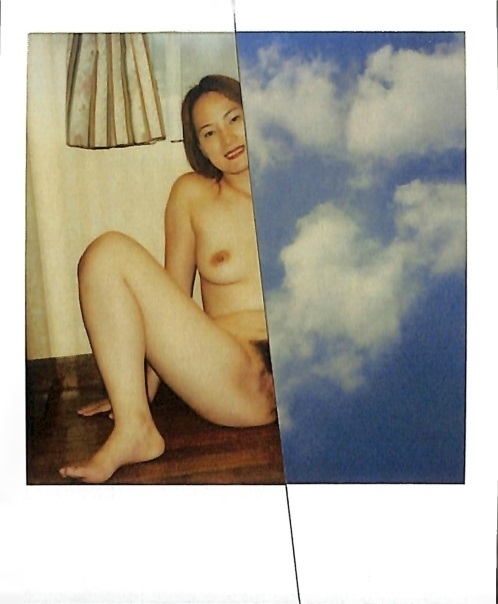 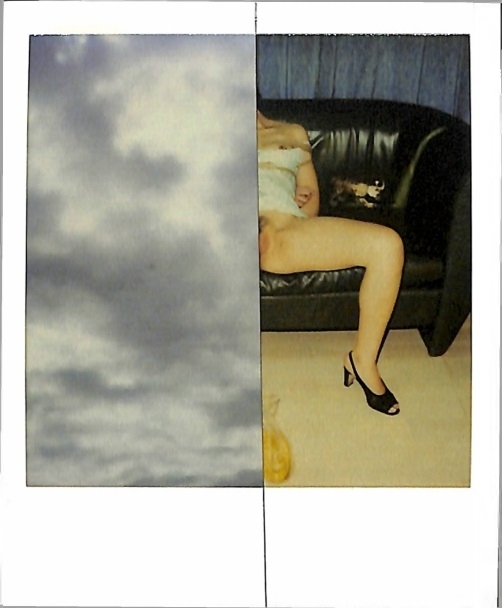 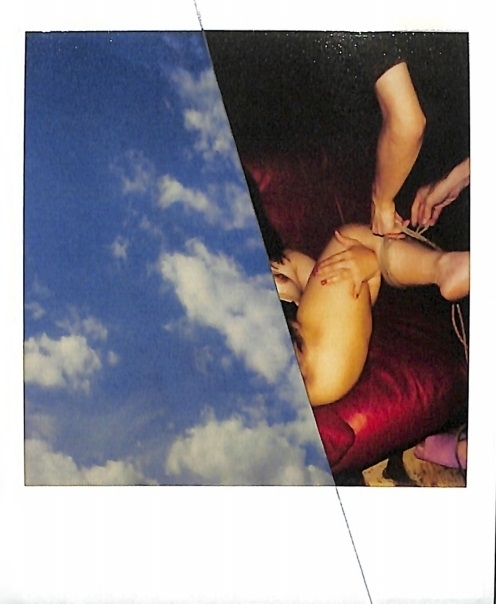 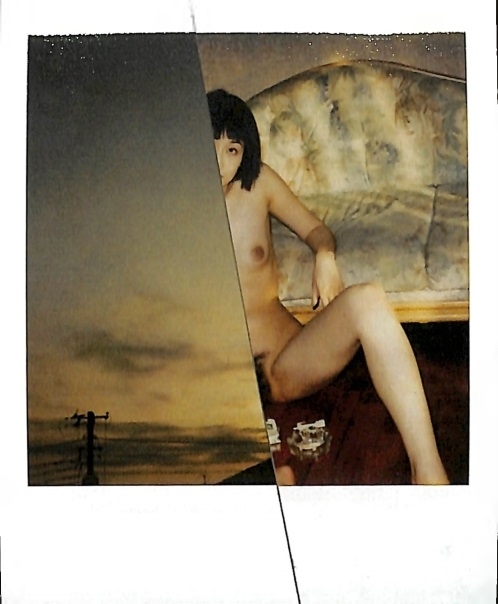 In Polarnography, the meeting of two images creates a straight line, which “captures the kinetic and structural moments of both the whole and its parts, and in this respect line is trajectory, movement, collision, attachment, slicing apart and joining" (RODCHENKO, Art into Life: Russian Constructivism 1914-1932, p 72). Thus, the limit that separates women's images from those of the sky is equivalent to the mirror in Bellmer's text, because, as a cut that marks a line on the surface of the photo, it allows us to intertwine what, at first, could not be intertwined, clouds and flesh, the virtual and the real. These forms are converted into a complex array of violent irruptive forces directed towards instability, since they resist not only categorization, but any act that intends to homogenize them. 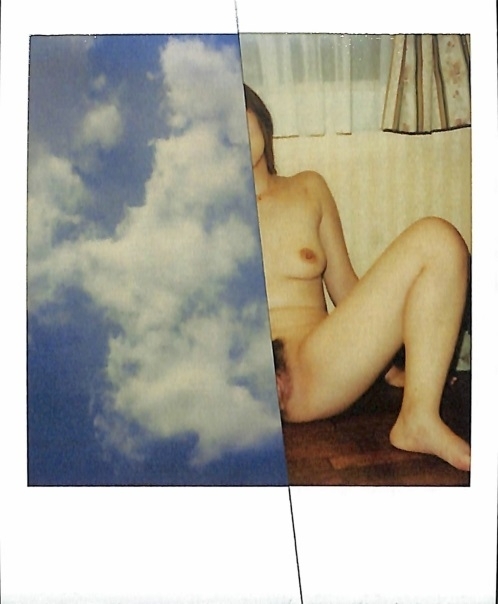 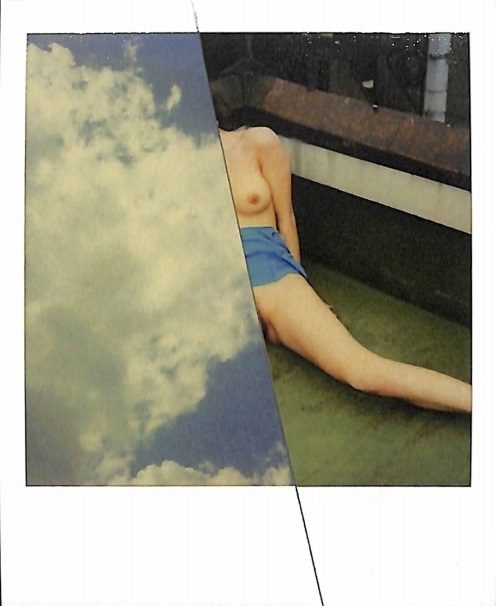 In Polarnography, collapse is a process of incessant division and reunion, as the mutilated images are mirrored in the split, like two simultaneous faces of the same surface, where identities, when obliterated, allow differences and similarities to be denied and assert themselves at the same time. About the splitting and unfolding of images, Hans Bellmer himself exemplified how it could be achieved through the binding of bodies:

"According to the memory I have accurately retained of a certain photographic document, a man, to transform his victim, had tightly bound her thighs, shoulders, and breasts with crisscrossed wire haphazardly causing bulges of flesh, irregular spherical triangles, stretching into folds, unsavory lips, multiplying never before seen breasts in outrageous locations." (BELLMER, Little Anatomy of the Physical Unconscious, or The Anatomy of the Image, p. 32) 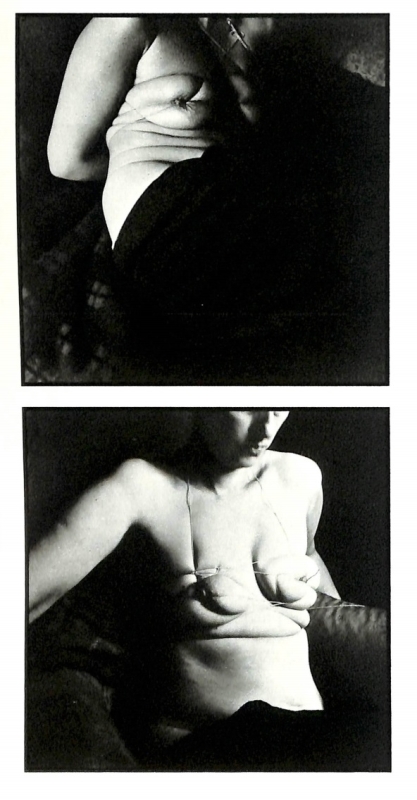 When Nobuyoshi Araki ties up his models with the kinbaku technique, he agrees with the way Bellmer explores the human body, making other images emerge from it, as a process of ruptures on the body and representation. It’s important to note that Bellmer performs this formless multiplication of flesh not only in his drawings, but in his photos as well, as is the case of those he took in black and white in 1958, using his companion Unica Zürn as a model (Fig. 26 to 29). 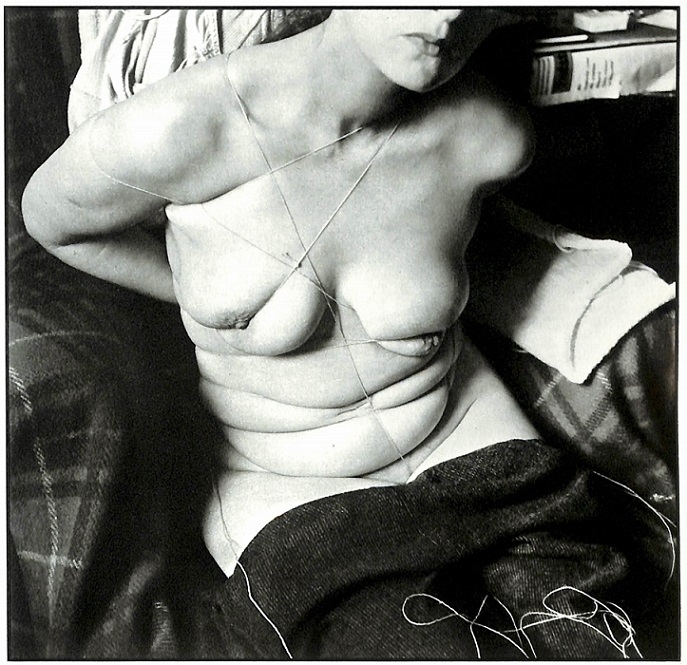 In these photos, unlike what happens in typical model poses, the female body appears tied, absent a head, a face, in short, an identity that redeems it. Before configuring itself as a portrait, the body, immobilized, becomes blind to those who look at it, as it breaks the limits of itself, overflowing, through the line that sacrifices it, its excess of life. 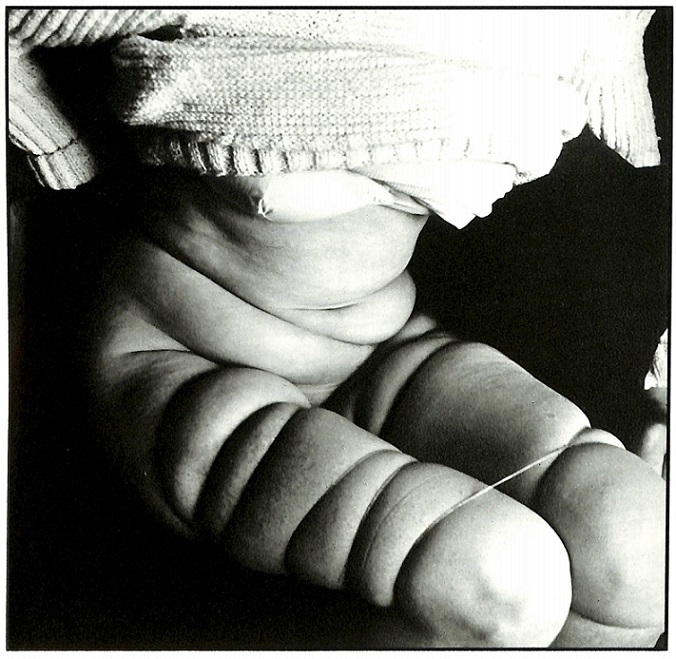 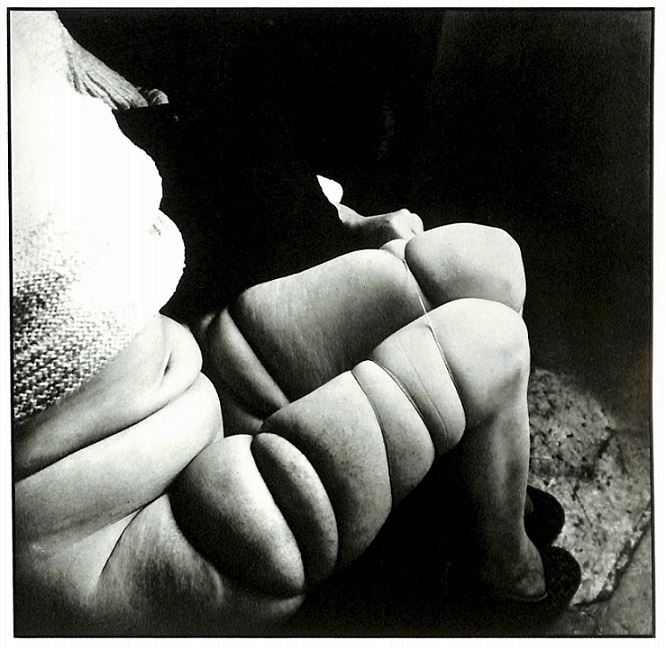 In both Bellmer's and Araki's photos, the disorder points to an unnamable place, where meaning is lost, as the body, at the same time as it becomes blind to the one who sacrifices it, leads us to the unknown, to anguish of a nakedness, from which death opens itself sovereign, immune to any moral project or plan.

Click HERE for an earlier article in which you can examine the Asian sensuality in the series of Araki.....!!!

Let us know your opinion on Araki's photographic work in the comment box below...!!