No, It's Not a Bible, Parody and Pornography in Tijuana Bibles

In the 1920s, a type of publication appeared in the United States that circulated clandestinely and whose most of the content was pornography based on parodies of popular newspaper strips of the time. The publication was called Tijuana Bibles and although its title might suggest it, it was not published in the city of Tijuana and had nothing to do with bibles. These small books were produced and distributed clandestinely throughout most of the United States and consisted of comically narrating the supposed sexual adventures of comic strip characters, celebrities, folk heroes such as “Blondie”, "Barney Google", “Moon Mullins”, "Popeye", “Tillie the Toiler”, "The Katzenjammer Kids", "Dick Tracy", "Little Orphan Annie", " Bringing up Father”, Mae West, Clark Gable and Joe Louis. 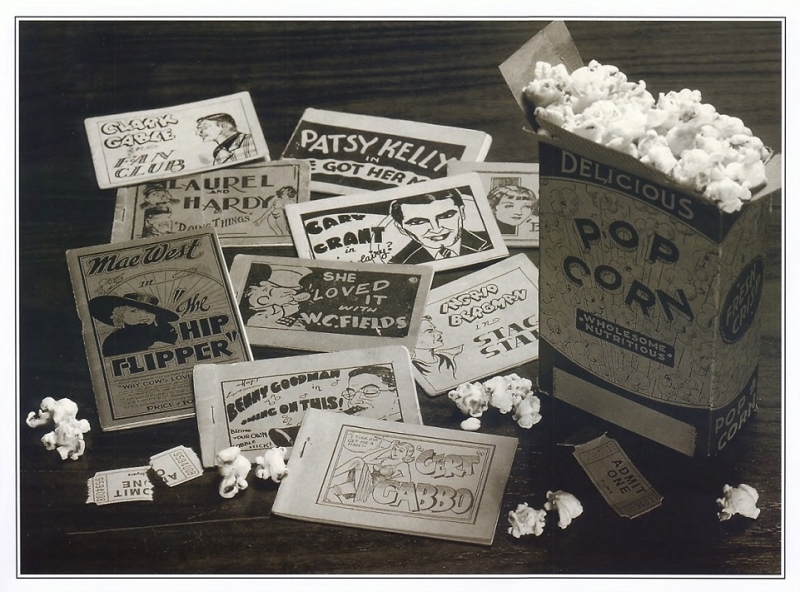 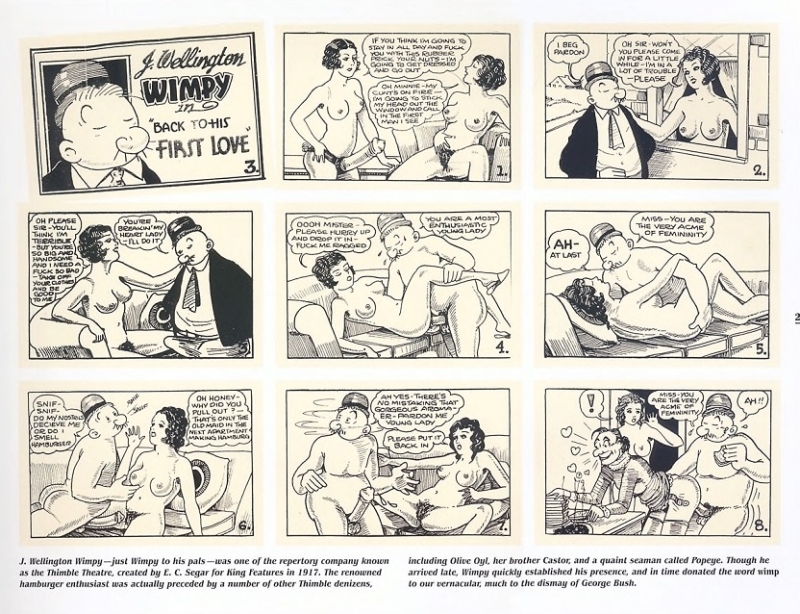 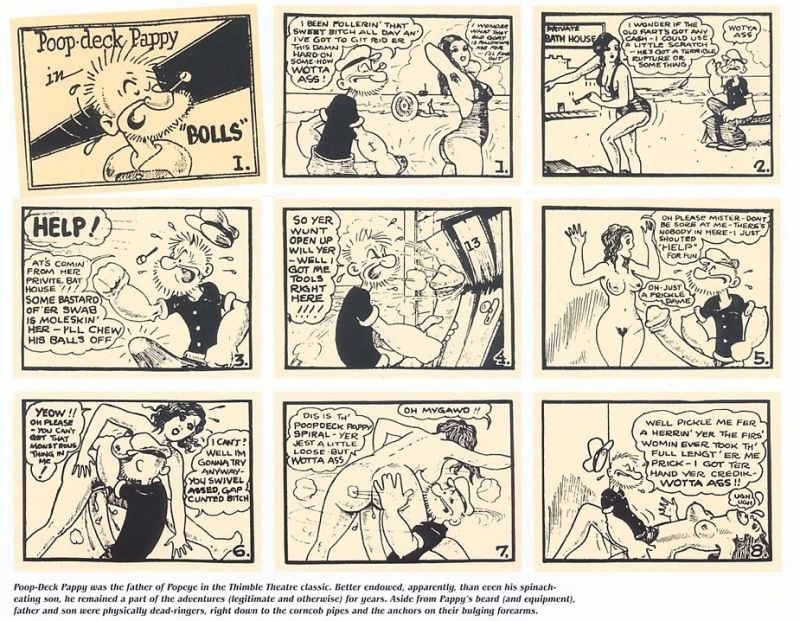 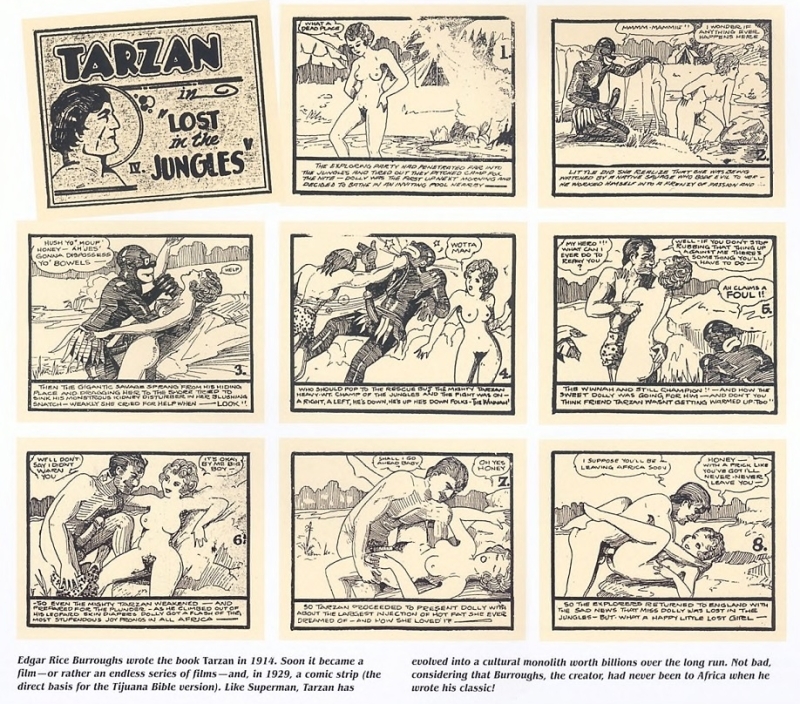 Secretly Behind the Counter

The typical bible was the standard format of eight printed 4 in wide by 3 in (100 mm × 76 mm) high black (or blue) and white pages with one panel per page and covers of a heavy colored stock. Some editions were sixteen to thirty-two pages long. In other regions of America, they were also known as Eight Pagers, Two-by-Fours, Gray-Backs, Bluesies, Jo-Jo Books, Tillie and-Mac Books, Jiggs-and Maggie Books, or simply as Fuck Books. Tijuana Bibles appeared in the late 1920s, reached their height in the Depression years, and their decline followed shortly after World War II. The magazine was sold for 25 cents secretly behind the counter at magazine stands, bus terminals, out of the backs of station wagons, schoolyards, garages, barber shops, barrooms, bowling alleys, garages, tobacco shops, barber shops, and burlesque houses. Millions of copies have been sold and there is no information that any publisher or artist has been sued. It is also unknown whether these publications were linked to mafia businesses or whether they were just independent businesses. According to Art Spiegelman:

the Tijuana Bibles were the very first real comic books in America to do more than merely reprint old newspaper strips, predating by five or ten years the format we've now come to think of the comics. In any case, without the Tijuana Bibles there would never have been a Mad magazine - which brought a new ironic attitude into the world of media that has since become pervasive - and without Mad there would never have been any iconoclastic underground comix in the sixties. (SPIEGELMAN, 2004, p. 5) 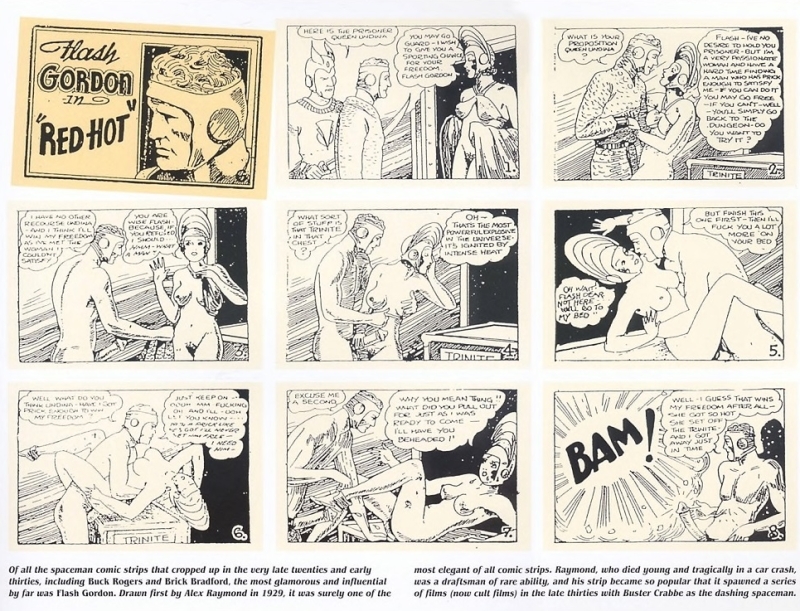 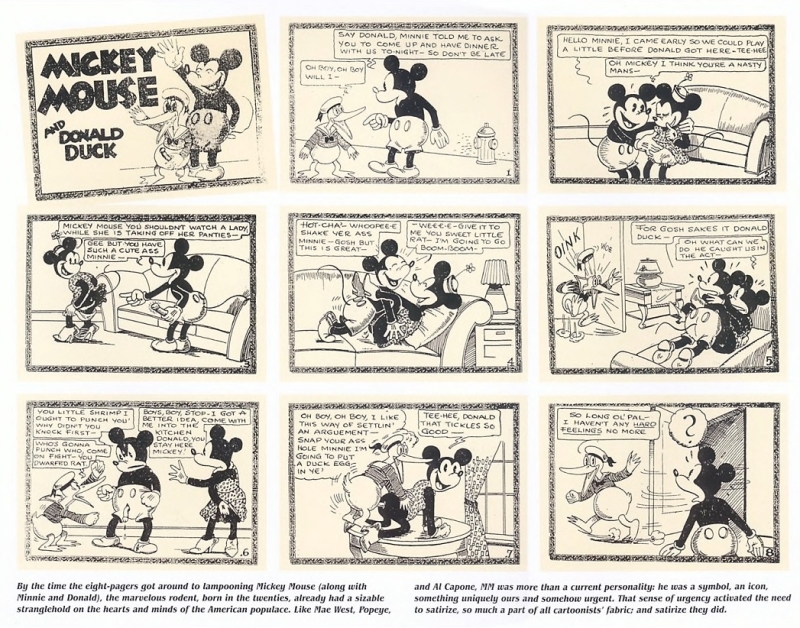 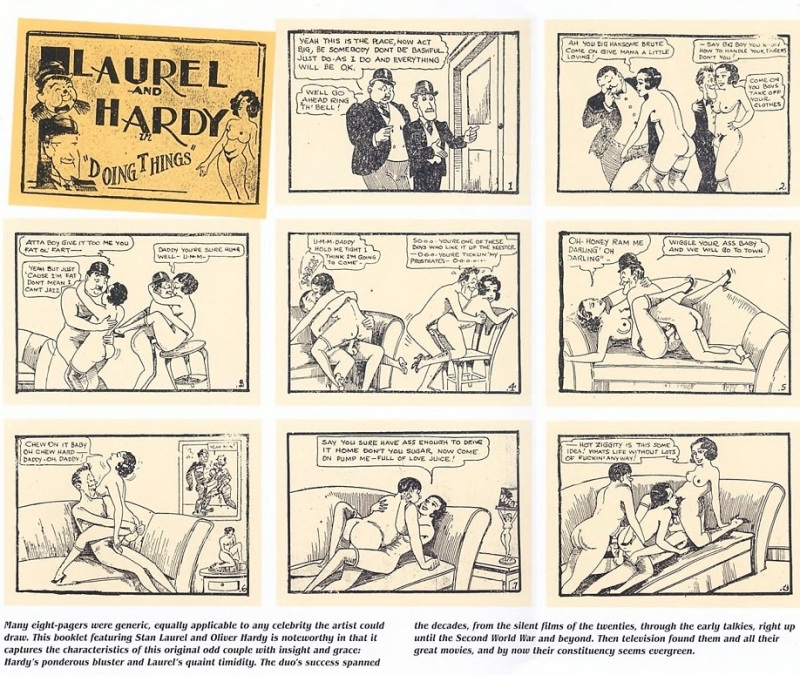 The artists who drew the Tijuana Bibles were anonymous. Later, few could be identified, such as one who signed “Mr. Prolific”, which has recently been identified as "Doc" Rankin by sexologist Gershon Legman, who claims to have met him in a cheap Scranton bookstore in the 1930s. He had a freelance cartoon studio in Manhattan, where he produced commercial art and cartoons and provided caricatures of editorial pages for the Brooklyn Eagle daily. In the opinion of Tijuana Bibles’ collectors and scholars, “Doc” Rankin would have been the artist who set the standards for Tijuana Bibles, as he managed to create similarities with the celebrities of the time in poses that were at the same time complex and graceful features. He would have produced nearly 200 “Tijuana Bibles” for New York printers during a two-year period around 1935. After his military draft in 1940, he retired from comics. 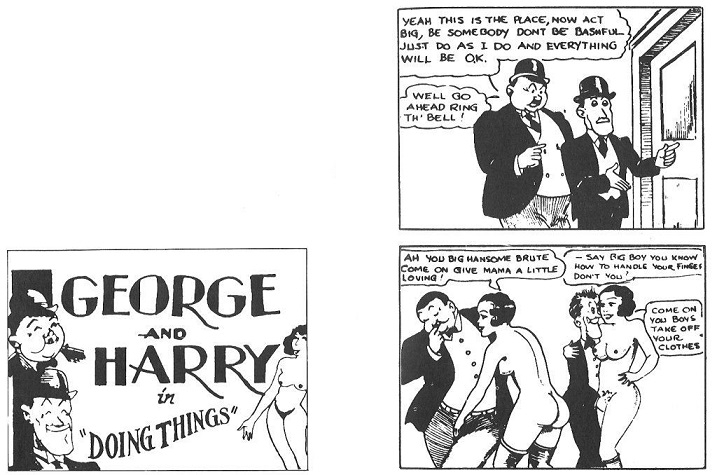 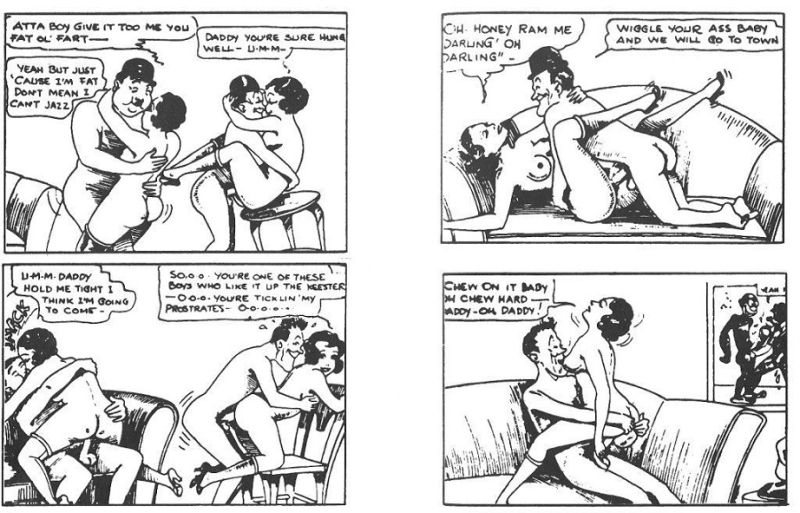 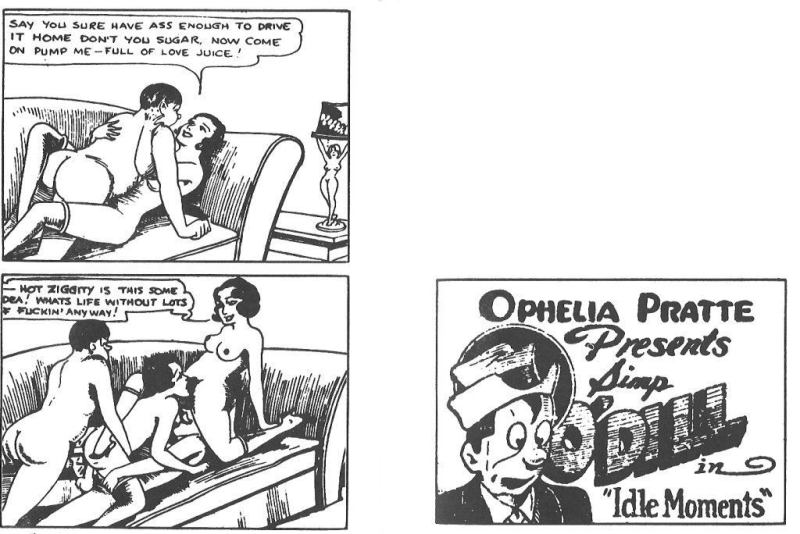 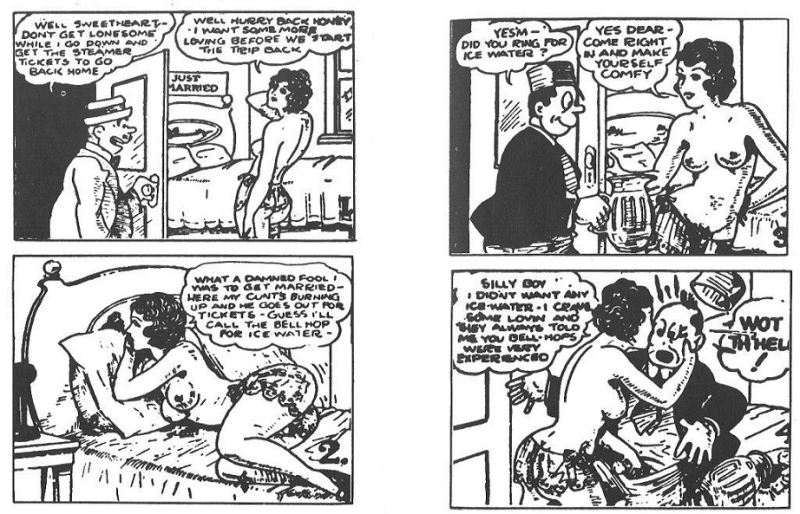 Another artist, this time identified by Art Spiegelman, was Wesley Morse who became famous for creating Bazooka Joe comic strip for the bubble gum company Topps in 1953. After spending a year in France during World War I, he returned to New York, where from 1921 he became a regular contributor to sketches for magazines such as Film Fun, Snappy Stories, Judge and Shadowland. As stated by Art Spiegelman: “Though his Eight-Pagers are often hurried and perfunctory, drawn by someone more interested in making the rent than making whoopee, they have a calligraphic free-flowing charm” (SPIEGELMAN, 2004, p.7). 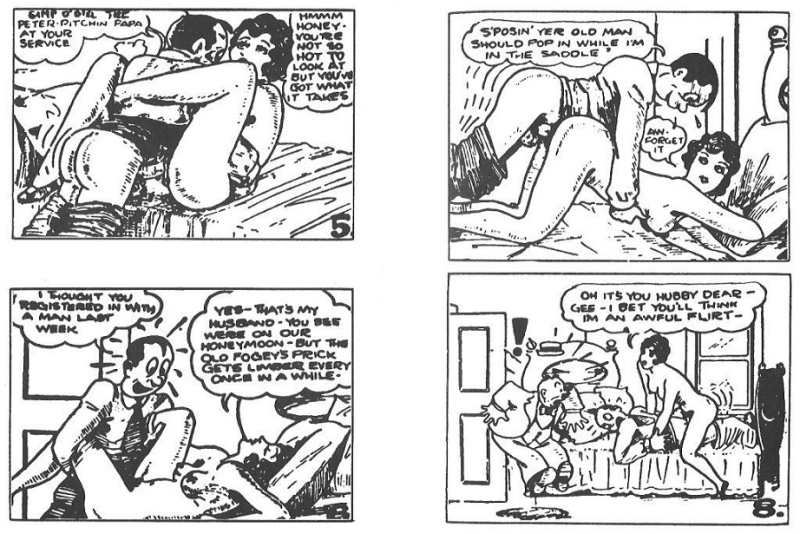 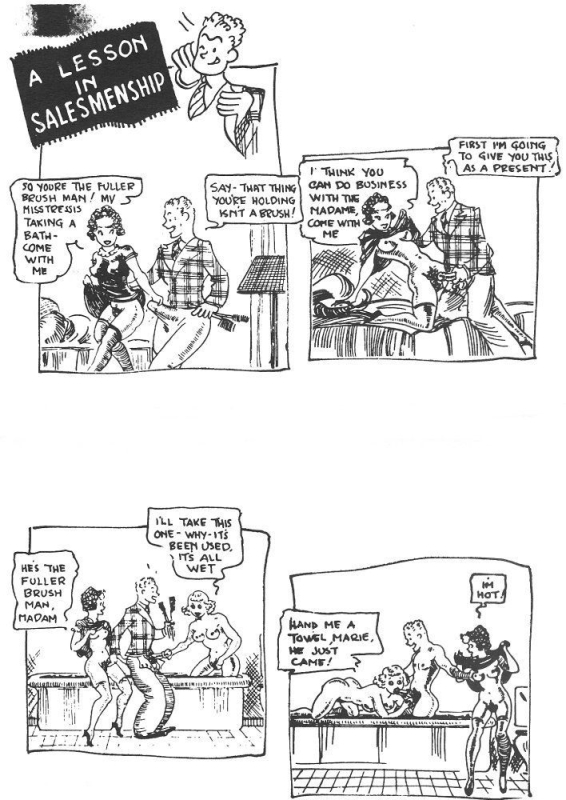 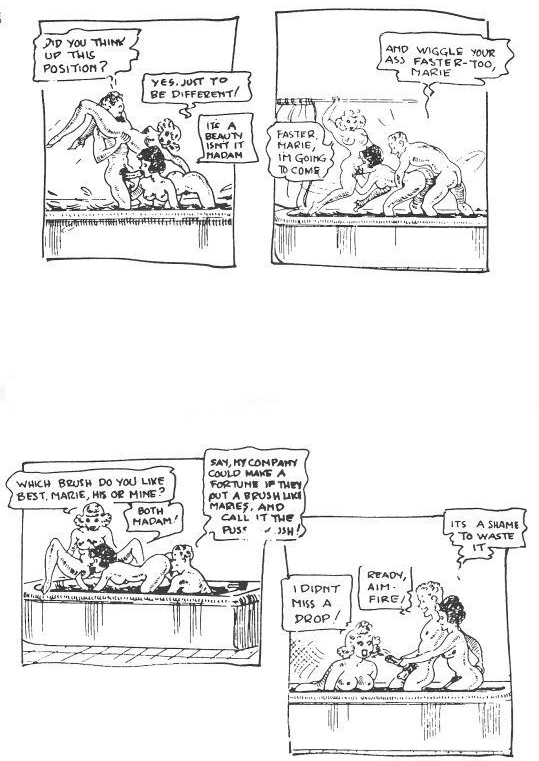 Democratization of the Sex

Tijuana Bibles is the first great collective expression of pornographic production aimed at a broad audience without distinction of social classes, as would later happen with pornographic cinema in the 1970s, so it is not strange that it has found in comics the ways to bring it to life, through drawings that are sometimes precarious and with few words, the obscene imagination of its readers. Thus, the consolidation of comics by superhero stories is the other side of the coin of an entertainment industry that had been created underground. The fact that the consuming audience of the superhero stories that emerged in the 1930s was also male underscores this aspect of fantasy written by men for men. 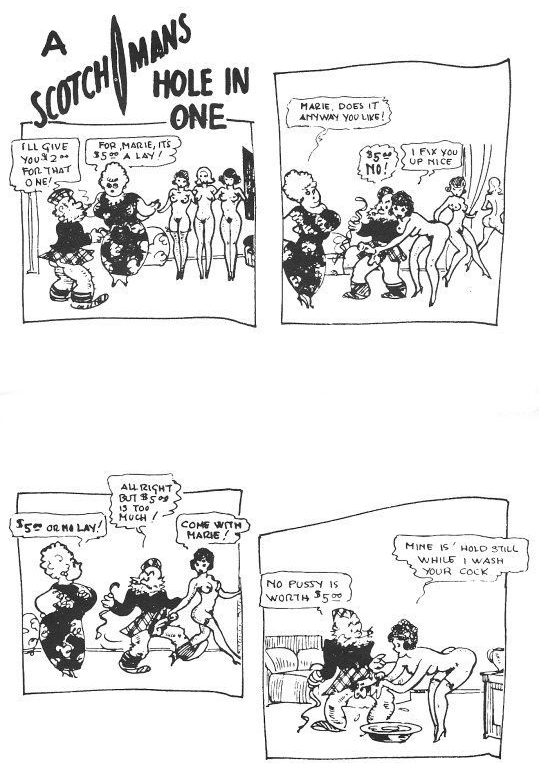 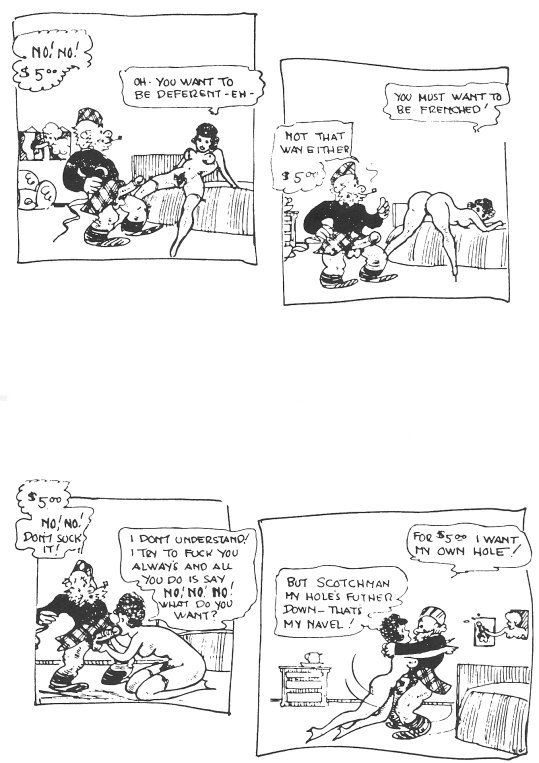 Since the heroism of Tijuana Bibles is sex, the women portrayed by these male artists are insatiable sexual beings who often express themselves as if they were men. If we were to talk about the secret identities of the women of Tijuana Bibles, we could say that they “are all guys with cunts, ready and eager to physically glom onto any creature or object anywhere near their reproductive organs” (SPIEGELMAN, 2004, p. 10). The power of Tijuana Bibles’ lust is about treating fictional characters or real people without distinction, men or women, as creatures thirsty for sex, which is configured in the democratization of sex and would take many decades to happen again, this time on the internet. 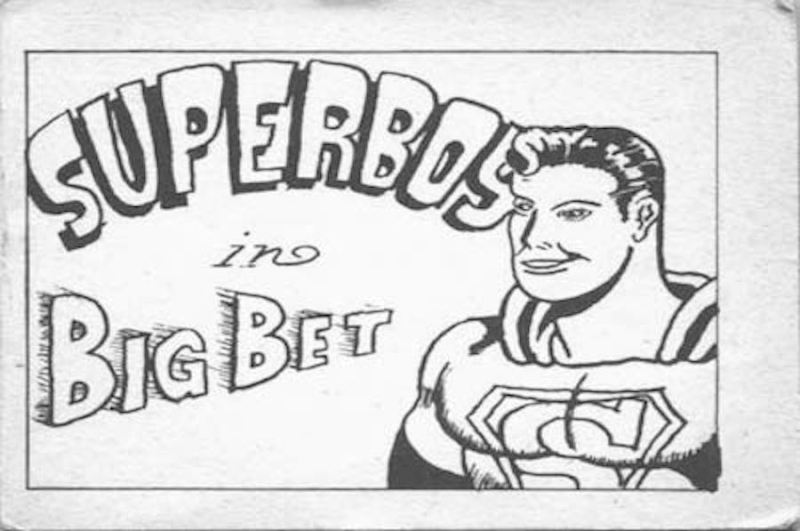 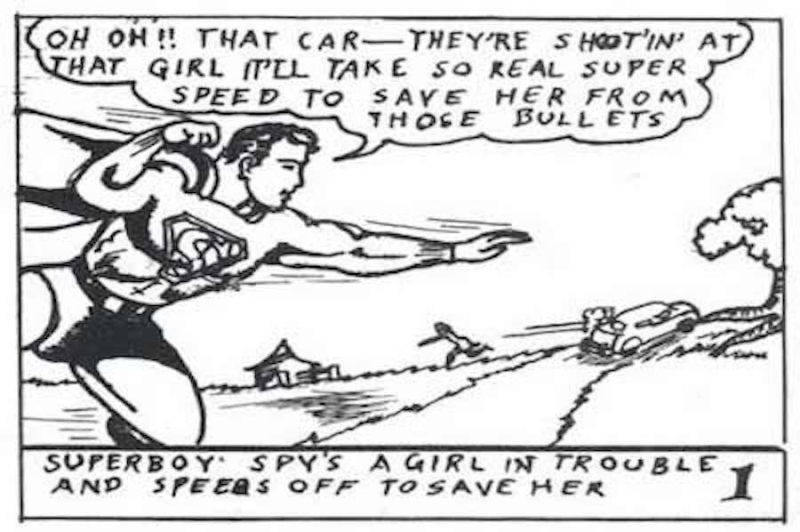 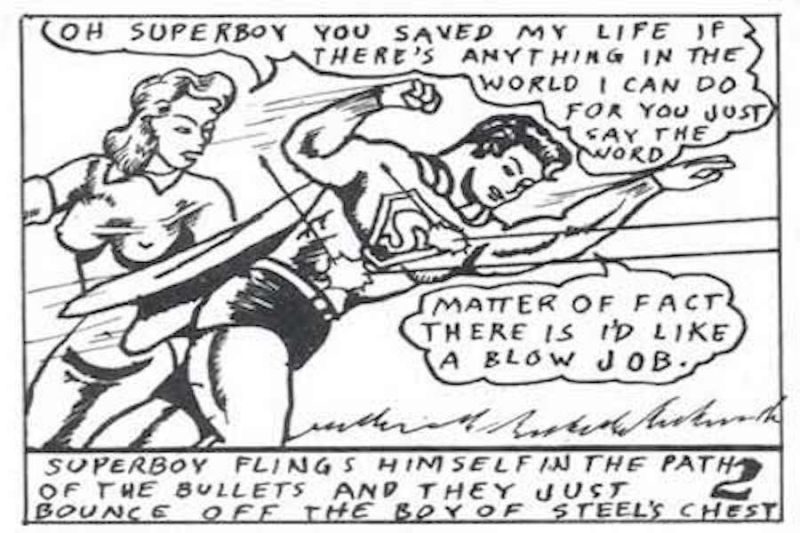 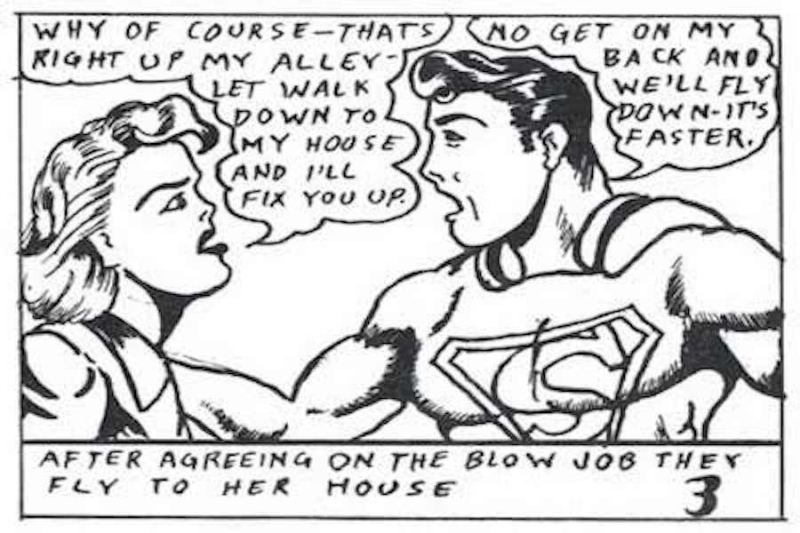 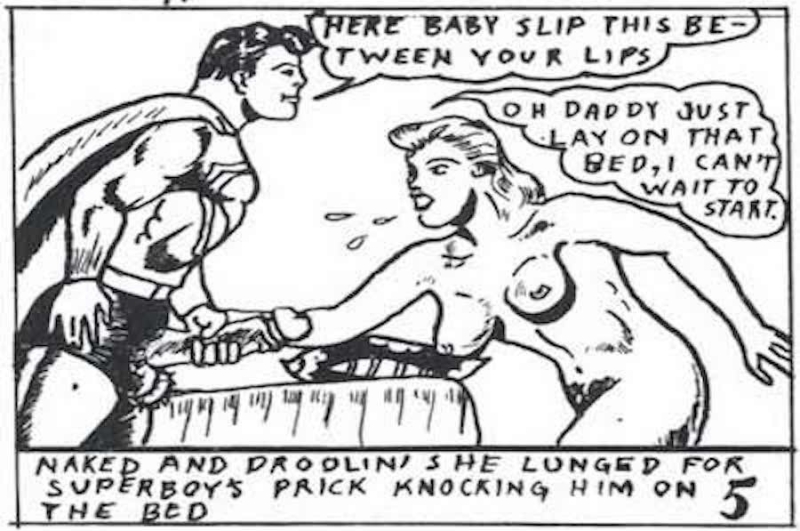 What happens next? For more naughty adventures of Superboy and many (127 additional pics!) other pornographic comics like Donald Duck, Dick Tracy, John Dillinger and so on. So join Premium now and try our 28 day free trial.

Click HERE for an article on Georges Wolinski and his sharp cartoons on sex, politics, and society

The site Tijuanabible.org is completely dedicated to the Tijuana Bibles

Let us know your thoughts on the Tijuana Bibles in the comment box below...!!