The piquant scenes in Kaulbach’s engravings below take place in colorful settings with often ironic references to authorities and clergy in particular. Nice to see that artists like this took the liberty of mocking the authority so early in the 19th century. It’s also interesting to compare these steamy images with the shunga of the same era. Especially when we look at the size of the genitals. 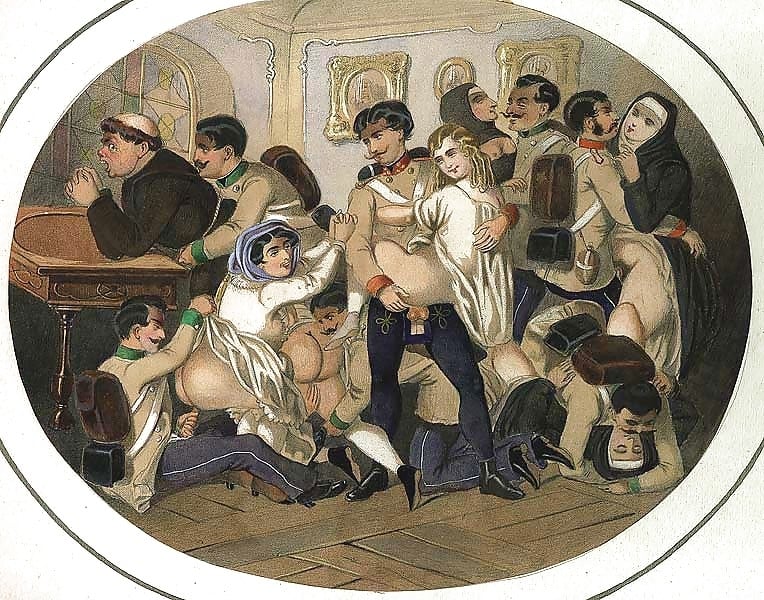 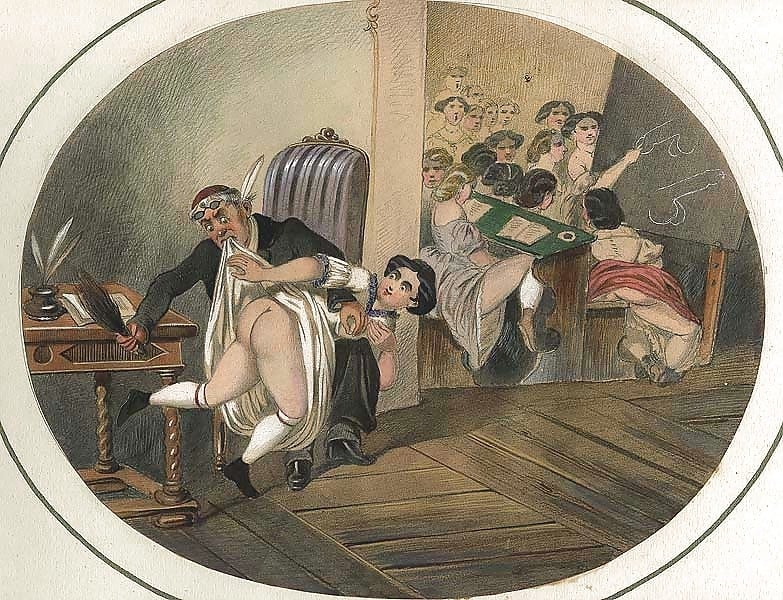 A teacher has taken aside a naughty adolescent schoolgirl and lashes her naked butt with a birch rod. The latter seems to enjoy it, as do the young students in the classroom in the background who are drawing male genitals on the blackboard. 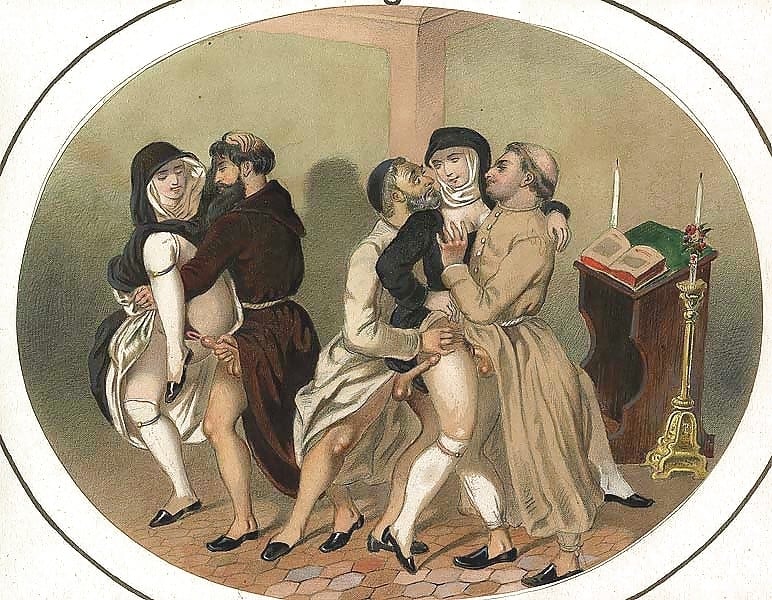 Again a satirical nod to the ecclesiastical ministry here with the unchaste gathering of monks and nuns. 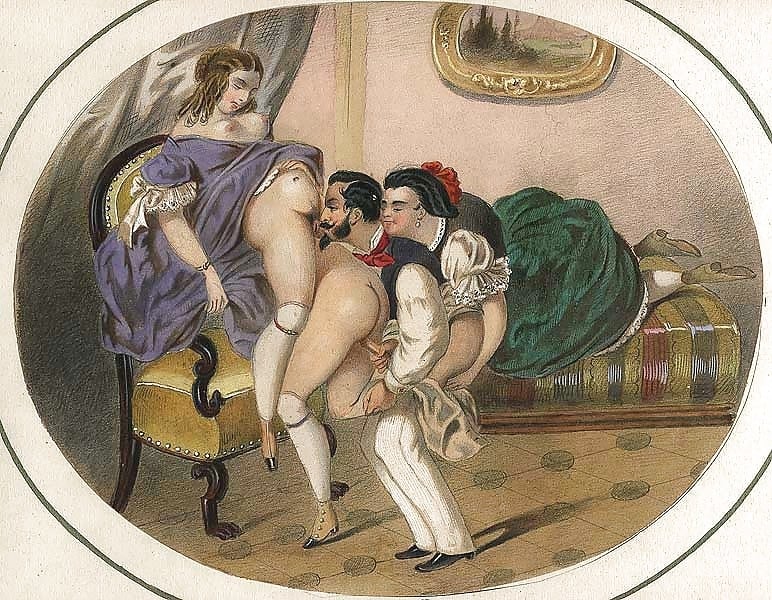 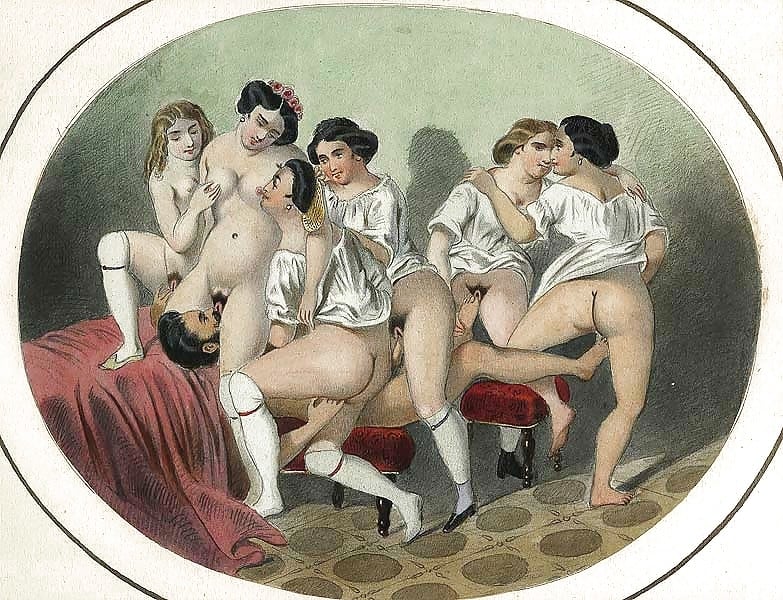 A mustachioed man has to use all his limbs to satisfy no less than six nymphomans. 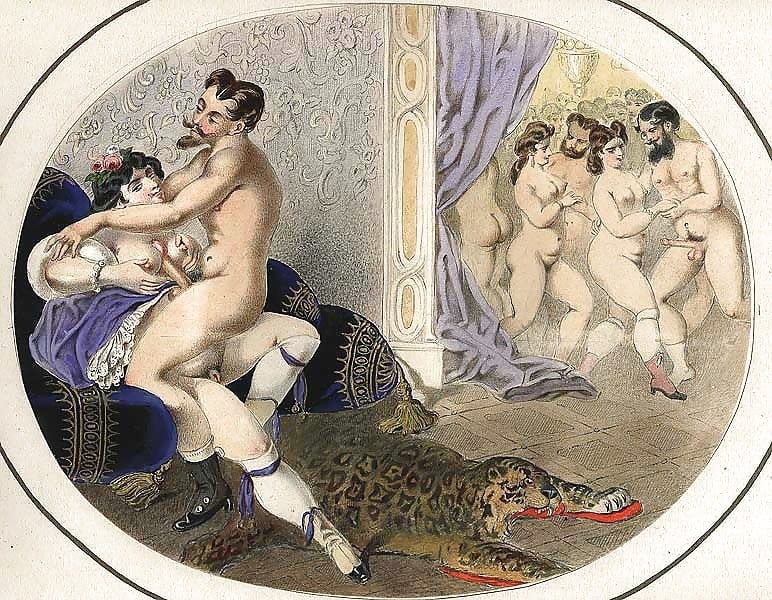 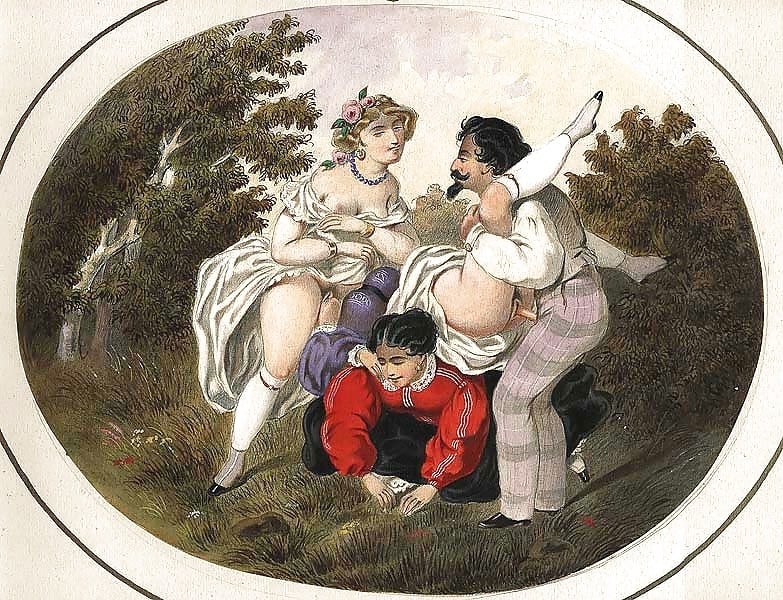 A man is having fun with three voluptuous women in the forest. 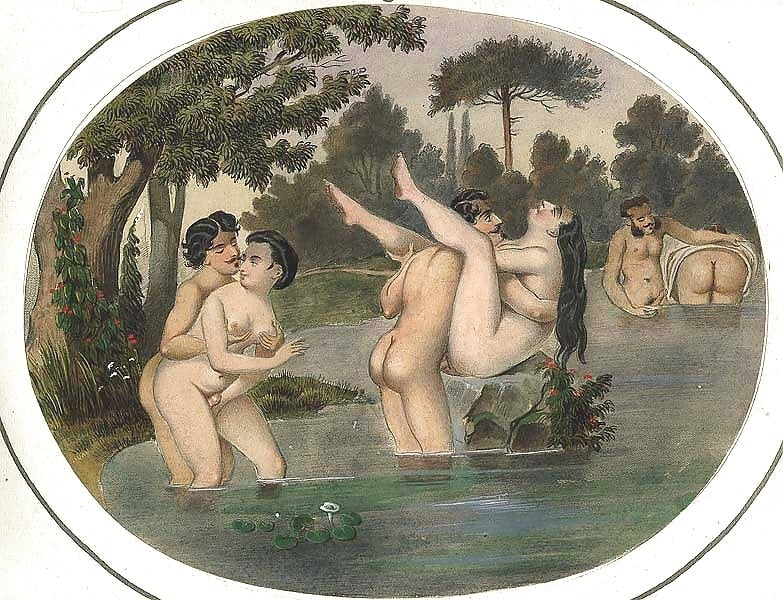 Three passionate couples in a lake. The couple in the center of the composition uses a rock as an aid during their intimate activities. The man with the sideburns in the background has lifted the fat woman’s dress and is preparing to penetrate her from behind. 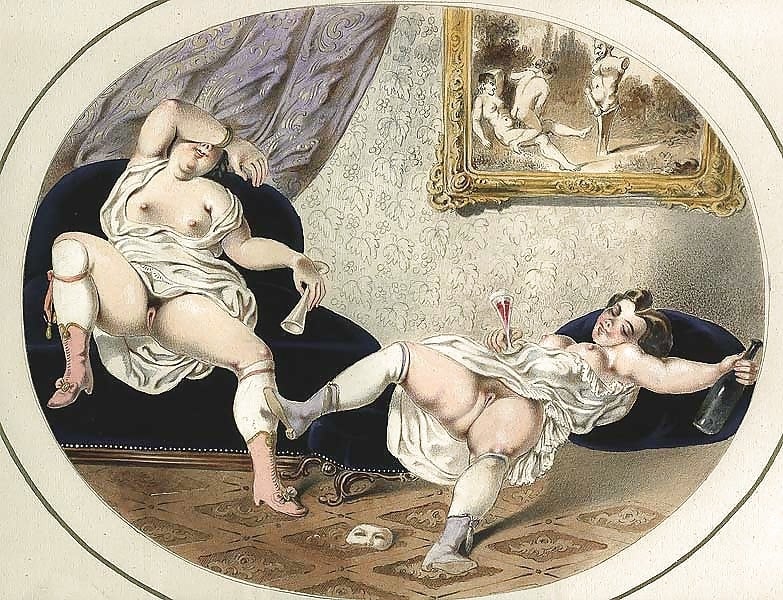 Two drunk female attendants of a masked ball lie on the sofa, totally exhausted. The painting in the background shows a spicy image of a copulating couple in front of a stone bust with an erection. 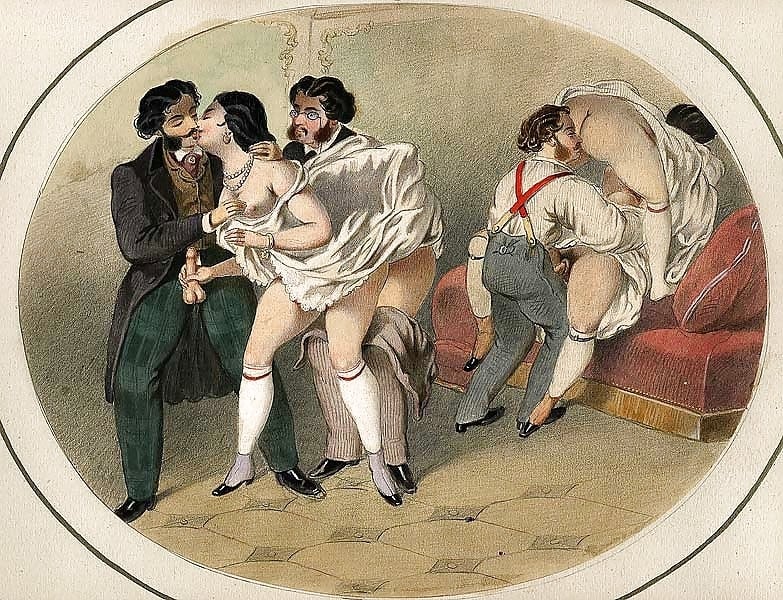 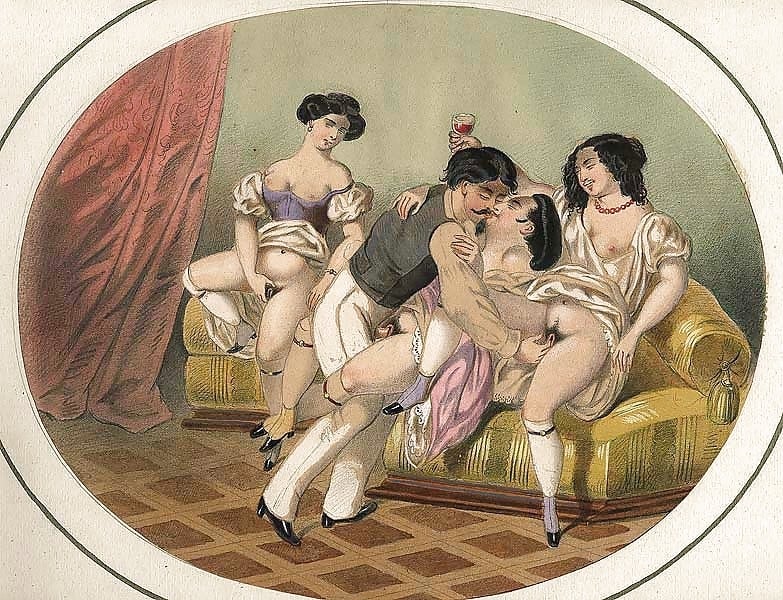 The gathering of this quartet has turned out to be an intimate affair. 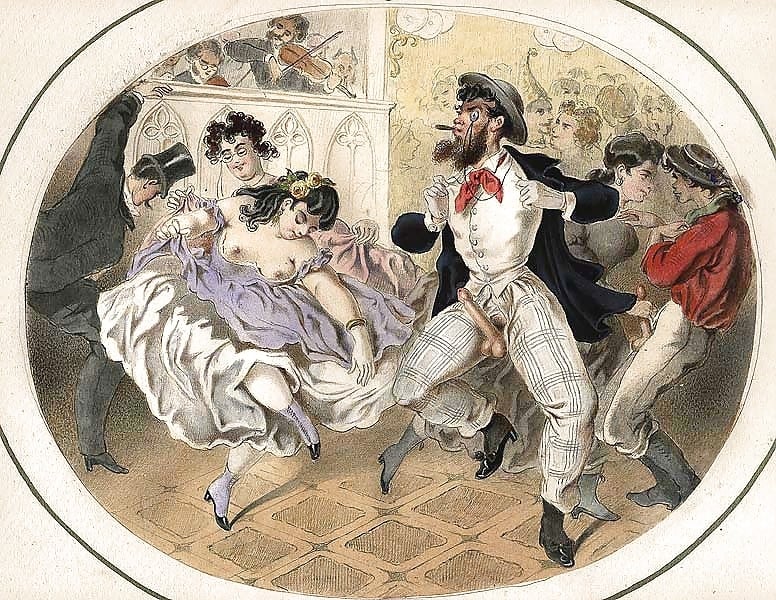 In a party hall, driven by the music of the orchestra in the background, dancing revelers go absolutely crazy. 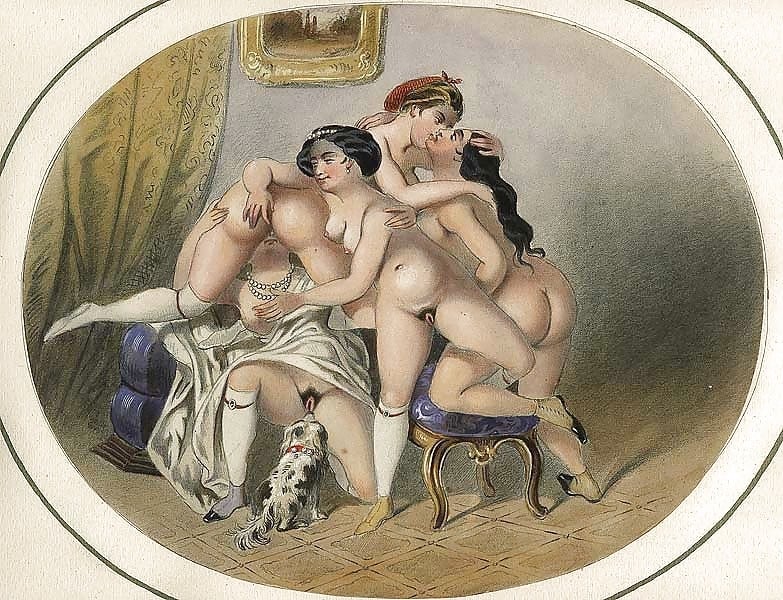 A lesbian menage a cinco with the around participants forming a circle. The crowd-pleaser is the King Charles Spaniel putting his nose where it doesn’t belong. 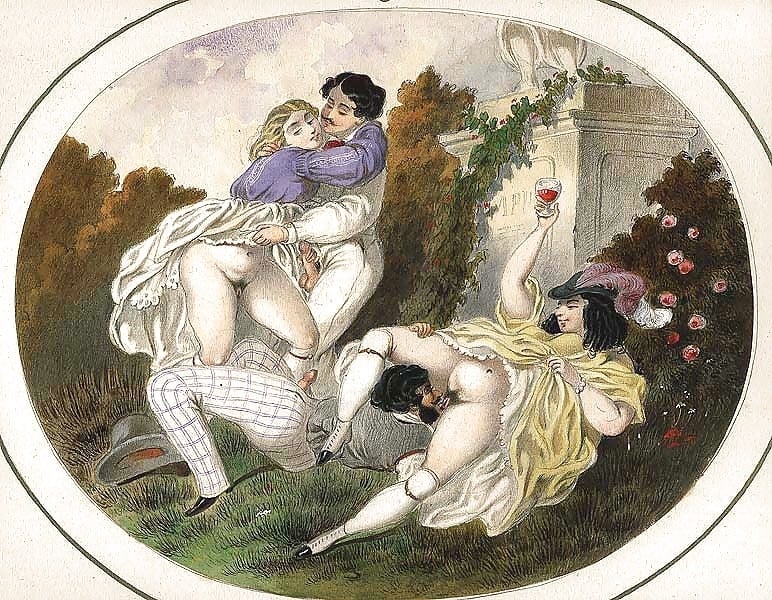 Two aroused couples in the foreplay stage in the park near a statue. The bearded man lying in the grass eats the woman while she clumsily raises the glass. In her corniness, she has put on the man’s feathered hat.

*I know, I’m an animal lover myself but if you move to the early 19th century for a moment (a time with a different moral), the exasperated expression of the skinned animal in this setting has something funny about it.

My personal favorite is Fig.10 with the intoxicated women. What is your favorite scene? Leave your reaction in the comment box below..!!

I like best number 14: with the dog and round bellies. Ladies keep their long socks and shoes.

Thanks Courcelle. Yes, that one is also hilarious. Probably a cold floor!