These chiseled watercolors reminding a viewer partly of Gustav Klimt‘s paintings, partly of shunga patterns, catch one’s attention by coloring, posing, and facial expressions of nude females. Genia Minache (1907-1972), the person behind the illustrations, was a French artist and a founder of the association of female artists of France. She illustrated the books of Diderot and Omar Khayyam, Kama Sutra and The Songs of Bilitis. Her works are present in state museums of France and private collections. 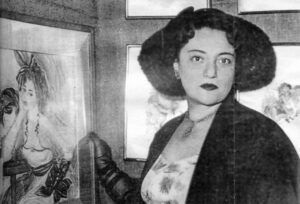 From Saint-Petersburg to Paris

Genia Minache (Evgeniya Semyonovna Khadzhi-Minache) was born in Saint-Petersburg in a family of descendants of the Crimean Karaites community. Her father was a well-to-do architect Sima Minache. Growing among people engaged in fine arts, Genia Minache didn’t become an exception. Due to the civil war in Russia (1917-1922), the family had to immigrate to Turkey. Then in the 1920s, they settled in Paris, where Minache enrolled in the National School of Decorative Arts and manifested herself as a painter and sculptor. 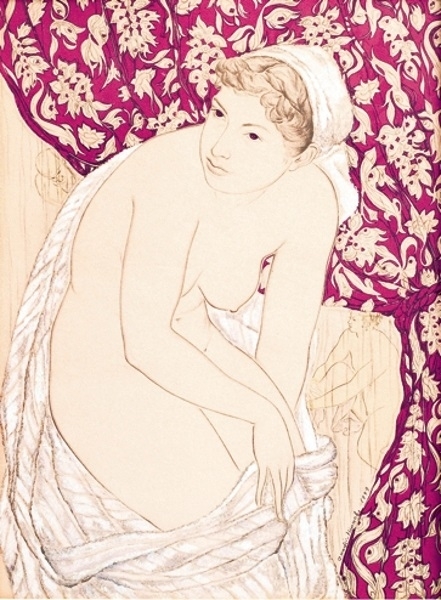 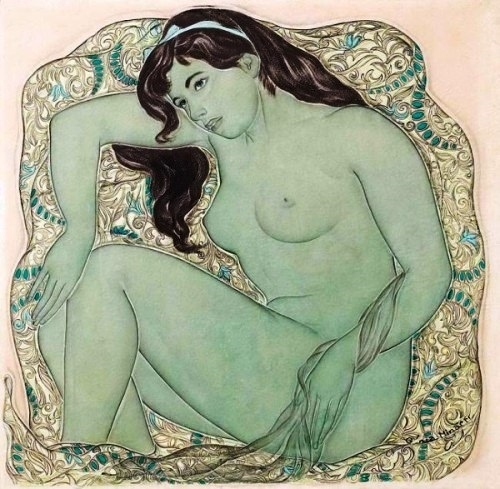 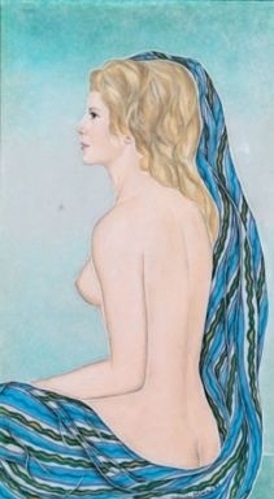 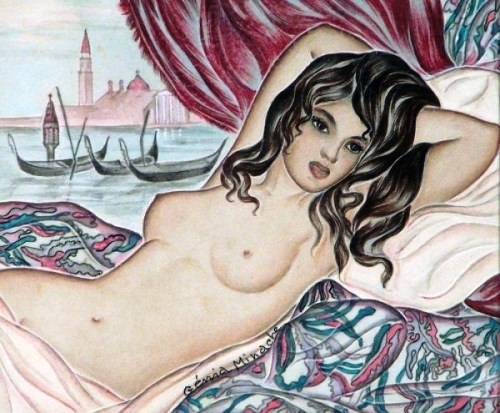 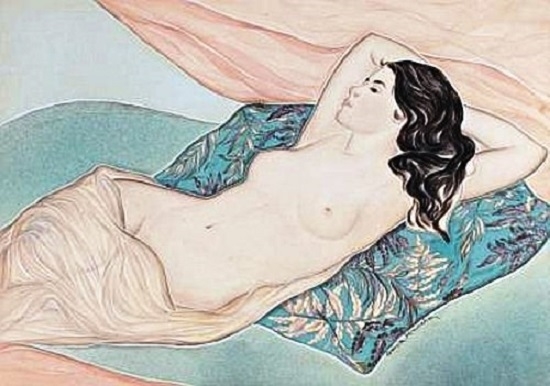 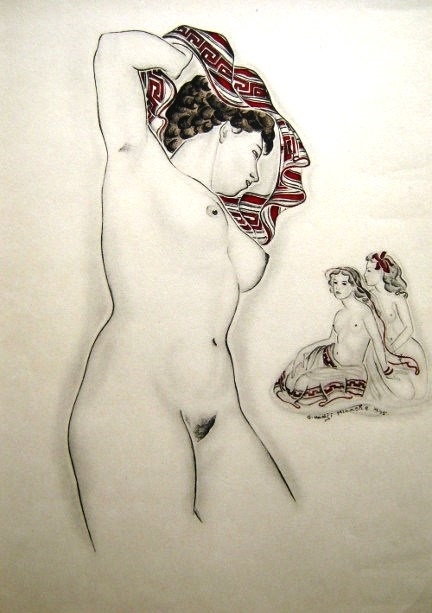 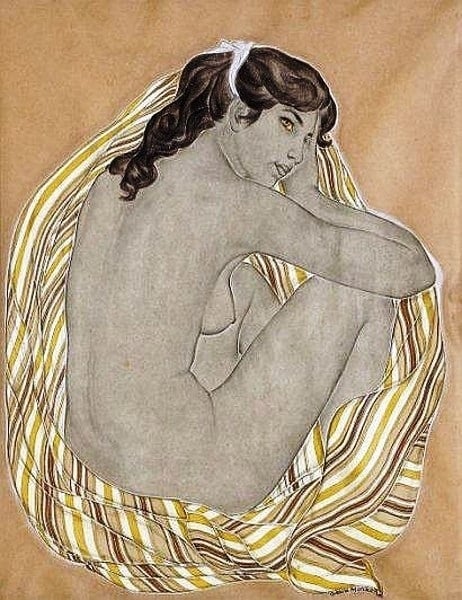 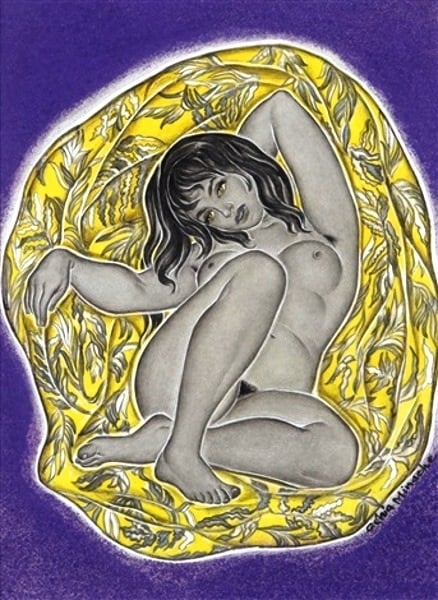 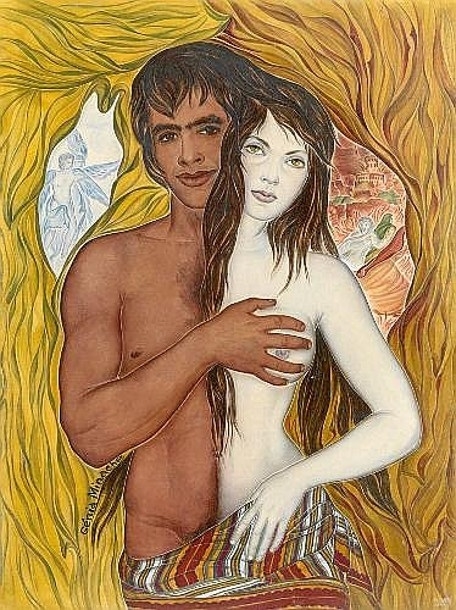 During her studies and after graduation, Minache sent her works to various exhibitions. In 1931, she took part in the show of the Russian artists who studied abroad. There she won the first prize for her sculpture The Black Thinker. Three years later, together with her female colleagues Avksent’eva and Ryabushinskaya, Minache organized an exhibition at the Bernheim-Jeune Gallery. Several works exposed there were obtained by the Jeu de Paume museum. The exposition of the group Femmes artistes modernes, which happened in 1935, was for Minache the next one to participate in. Having married a resident of Czechoslovakia in 1932, whom she would divorce fourteen years later, Minache started exposing her paintings in Prague. The war caught her in France. From 1942 to 1945, she moved from place to place, organizing solo exhibitions. Curiously, sometimes the visitors stole her works in case if they couldn’t buy them. French nobles often invited her to paint portraits of their young daughters. In 1958, the artist was awarded the Grand Prize at the Vichy exposition. As her recognition grew, she attained the Grand Prize of Paris and the gold medal five years later. She also was the one to be honored with the Officier des Palmes Academiques award for her art merits in 1963. 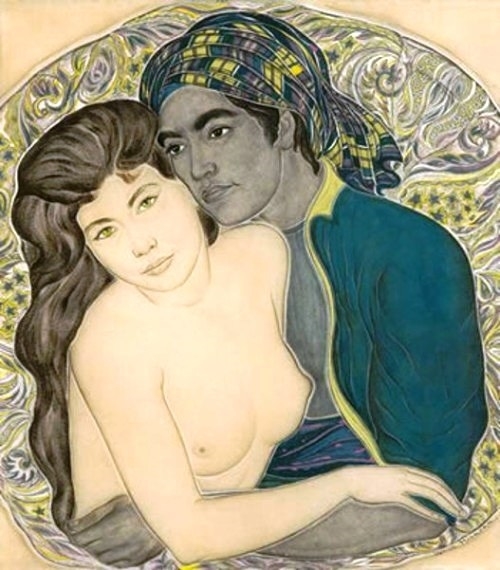 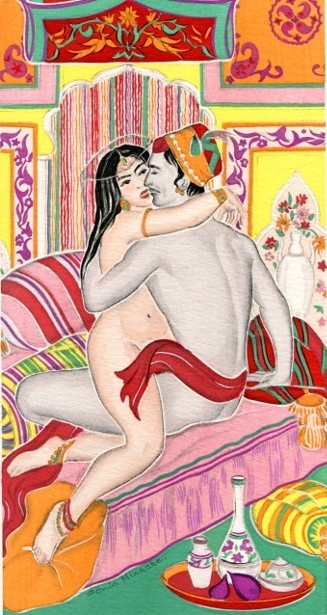 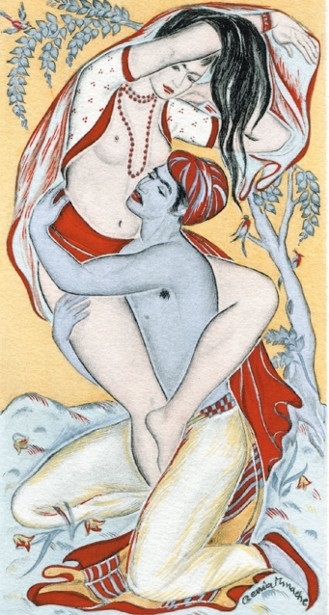 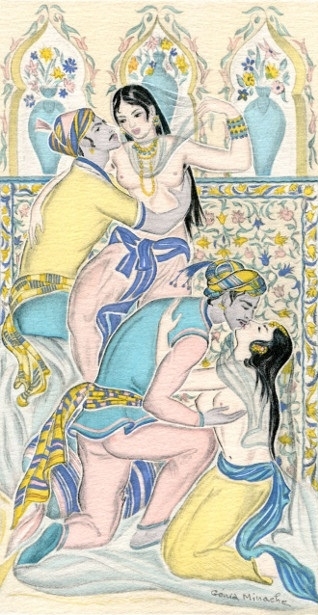 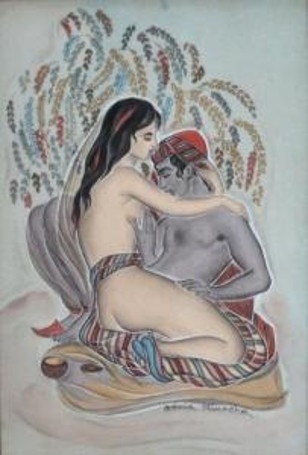 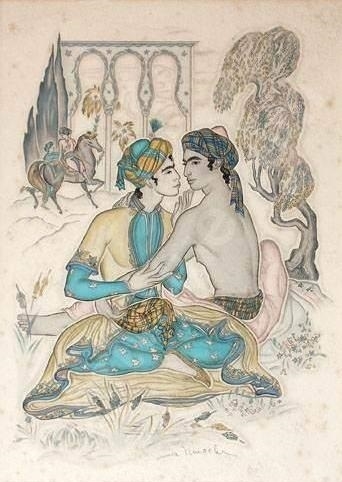 Minache produced still-life paintings and was engaged in illustrating the most well-known erotic oeuvres. In 1950, she painted images for the book Songs of Bilitis, “must-illustrate” for European artists (let’s remember Barbier and Lambert, the heroes of our previous articles). By the end of the 1950s, Minache illustrated the exclusive edition of Kama Sutra. In 1957, she accomplished a set of images for Omar Khayyam’s Rubaiyat, for which she used sketches made during her stay in Turkey. She also illustrated the libertine Diderot’s novel Les Bijoux indiscrets / The Indiscreet Jewels (1748) telling about Mangogul, Sultan of Congo, whose special ring makes women’s vaginas* or “jewels” talk about their amorous adventures. Mangogul uses the ring to examine his mistress Mirzoza, whom he suspects of infidelity. The major feature of Minache’s paintings is the contouring of depicted figures, which makes them look more dimensional and decorative. Minache regarded herself as the follower of Saint-Petersburg’s modernism, the local manifestation of the Art Nouveau movement. Nevertheless, her works as well wear the touch of oriental art with its’ smoothness of lines and meditative atmosphere. 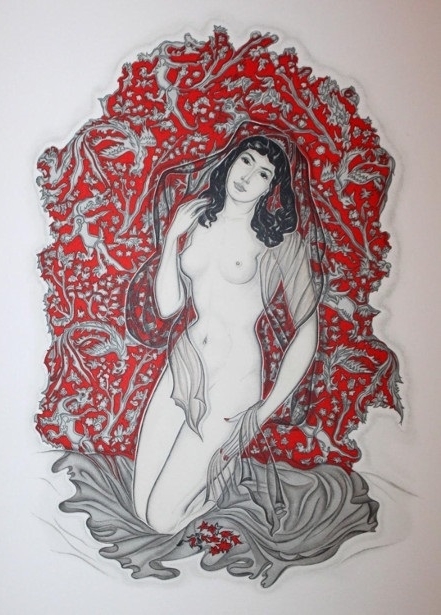 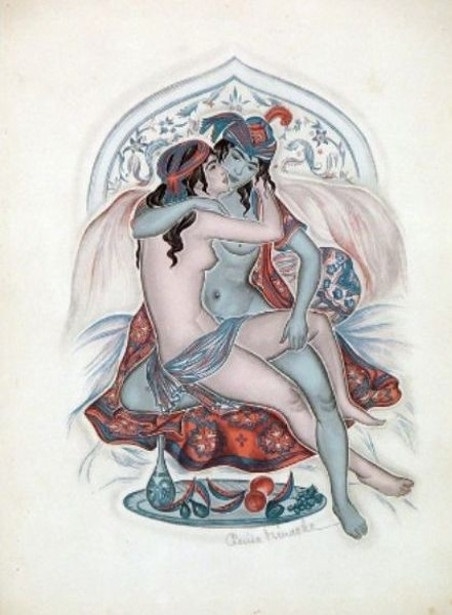 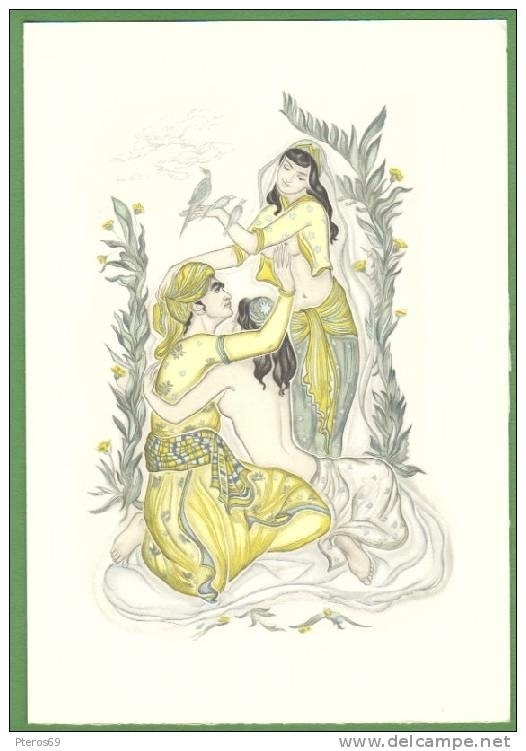 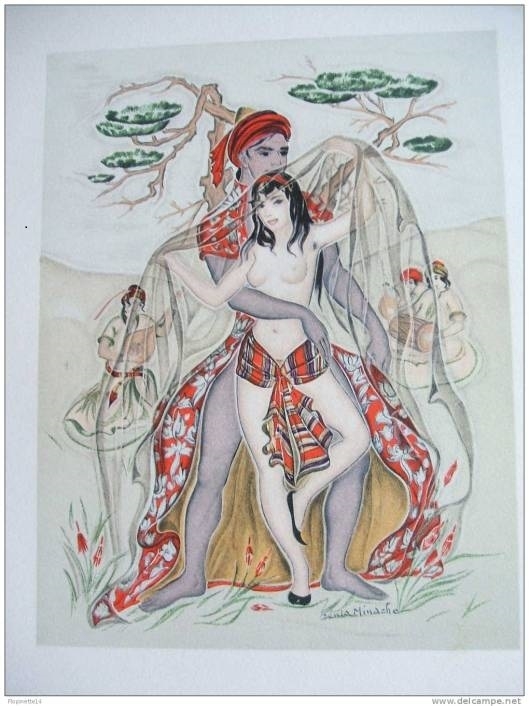 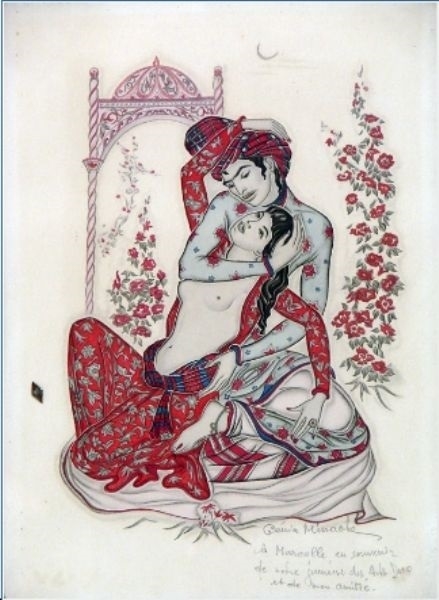 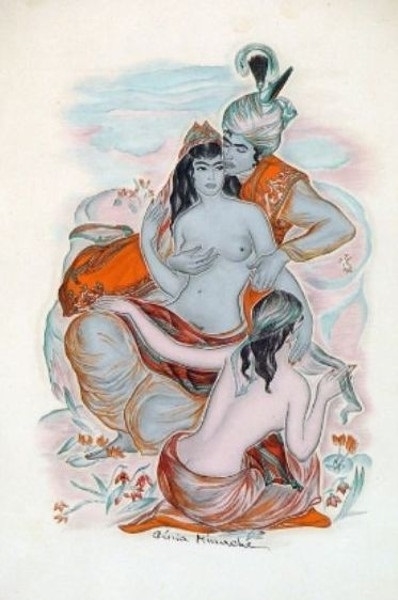 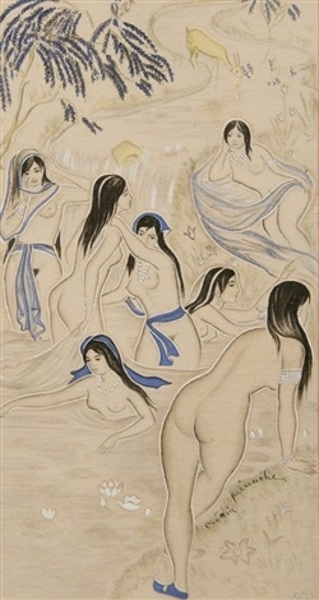 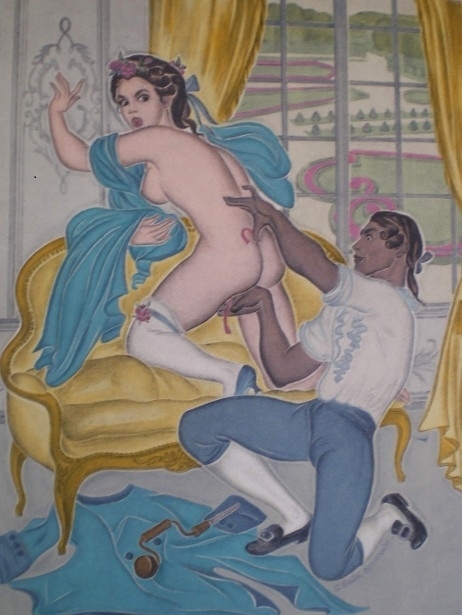 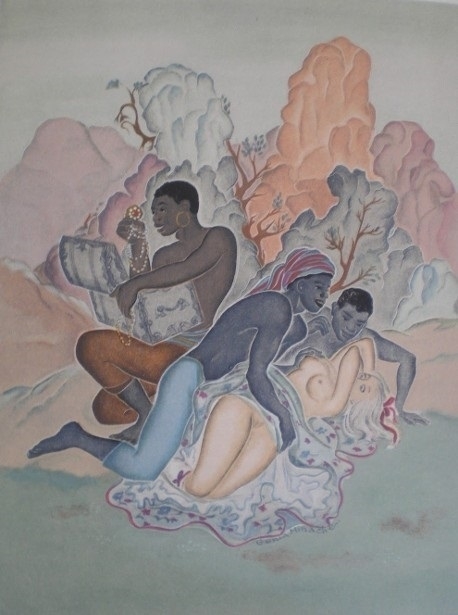 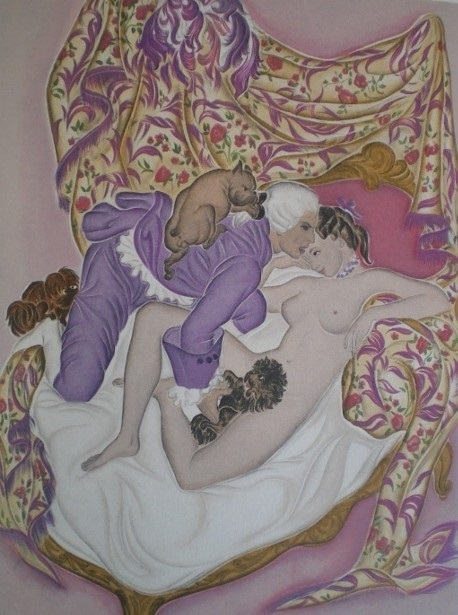 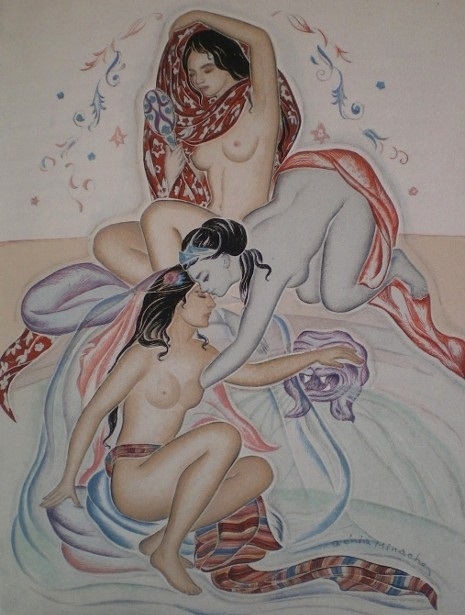 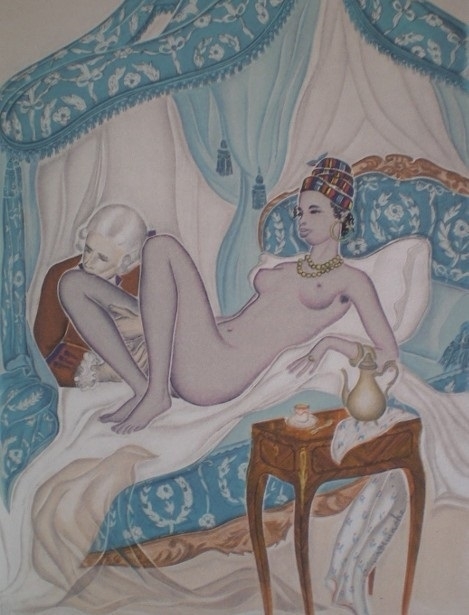 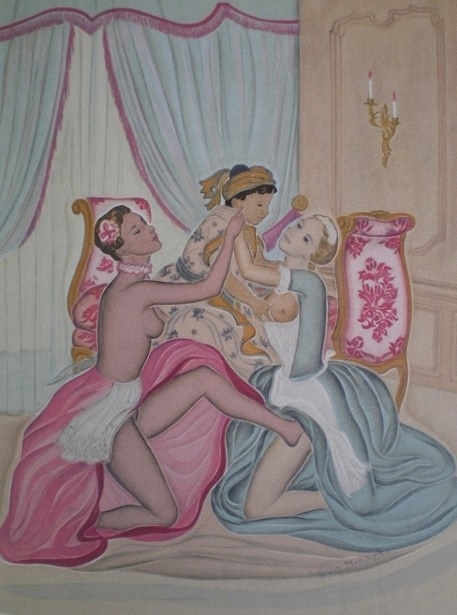 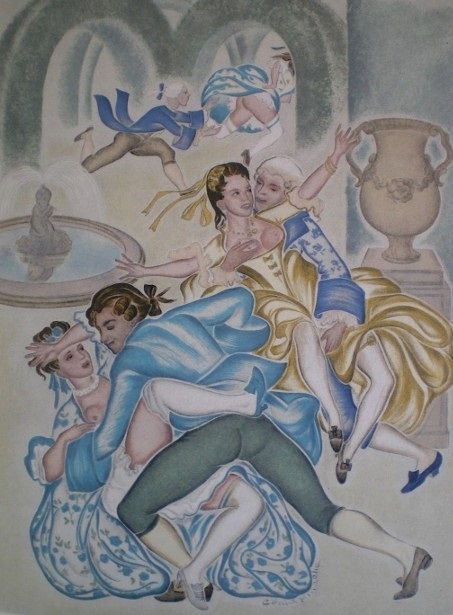 *Bijou, which means “jewel”, was used as slang for the vagina in 18th-century France (Wikipedia.org)

Click HERE for the illustrated Kama Sutra of Georges Pichard….!!

We’re always looking for your input such as a reaction to this article or suggestions for future articles. You can leave your reaction in the comment box below…!!