Hendrick Goltzius (1558-1617) was a notable representative of baroque art combining masterful techniques with sophisticated yet sensual content. During his lifetime, Goltzius produced over 300 engravings and over 400 drawings obtained by collectors all over Europe. 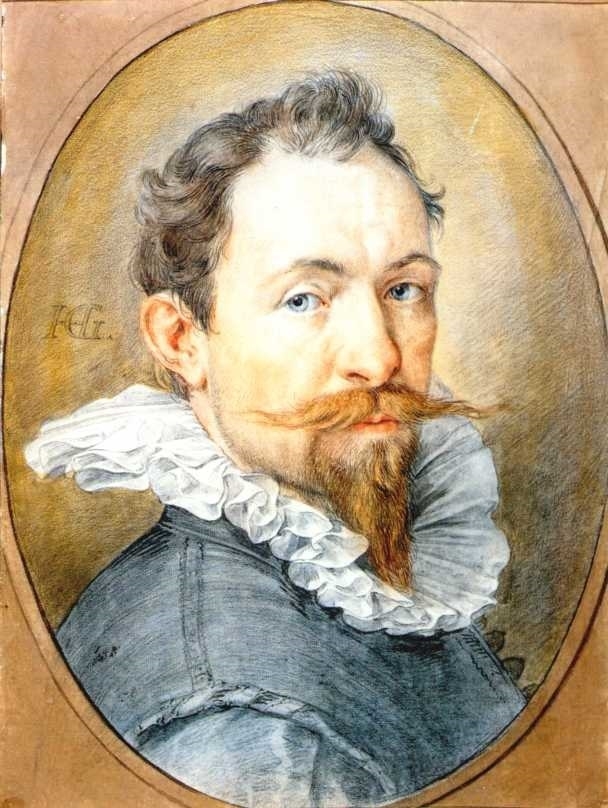 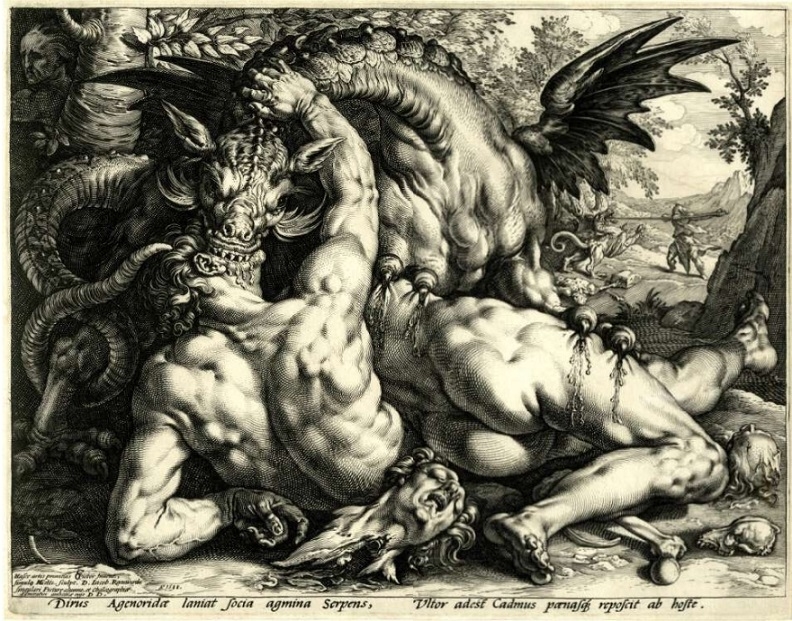 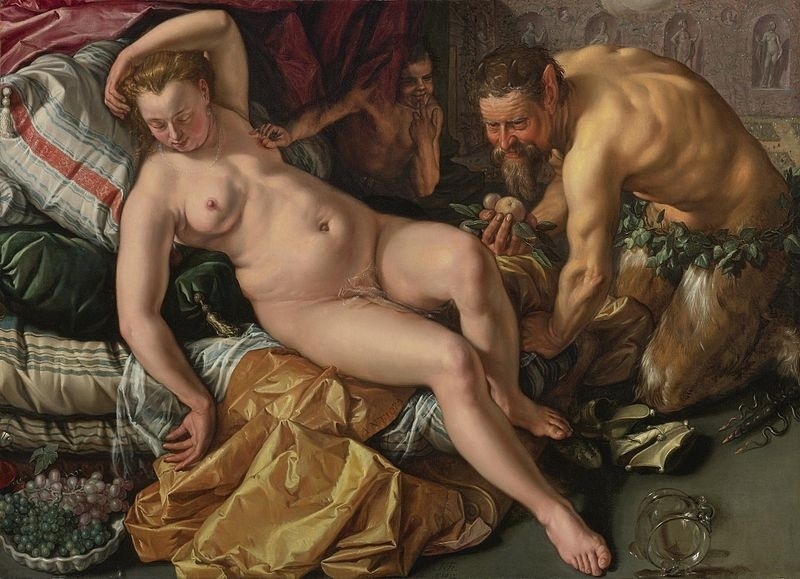 Fig. 3. Antiope and Jupiter disguised as a satyr, 1612 (Wikipedia.org). Jupiter looks at Antiope’s genitalia, at the same time our attention is drawn to Antiope’s breasts as a satyr-kid holds a nipple. 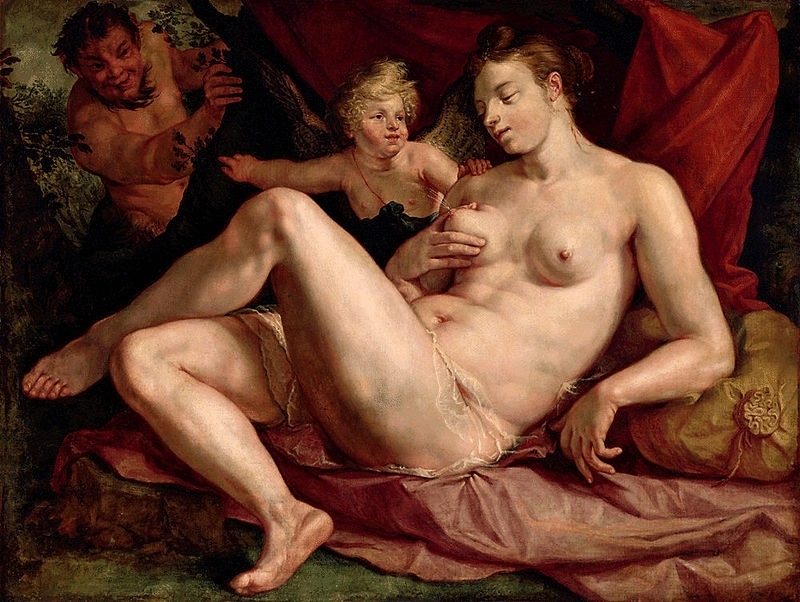 Fig. 4. Another painting on the plot of fig. 2. (1616), wikipedia.org. The accent now is put on Antiope’s breast only, representating both female sexuality and motherhood.

Hedrick Goltz (later his name was latinized as Goltzius), defined by art historians as the last professional engraver, was born in Brüggen into an artistic family. As his grandfather was a painter, his granduncle was a sculptor, and his father was a glass-painter, it comes as no surprise that the son followed in their footsteps. The remarkable detail of Goltzius’s biography is the accident that happened to him as an infant. Being one year old, the future artist fell in hot coals. The fall resulted in paralysis and deformity of his right hand, which later the artist himself depicted (fig. 5). One would think such a misfortune must make impossible any career in fine arts, but this was not the case. Whether because of extraordinary luck and perseverance or because of the family background, Goltzius showed an outstanding talent for drawing and, at the age of 17, became an apprentice of the engraver Dirck Volkertszoon Coornhert, a Dutch refugee. Working on transposing different paintings and drawings into engravings, Goltzius learned to imitate various art styles. 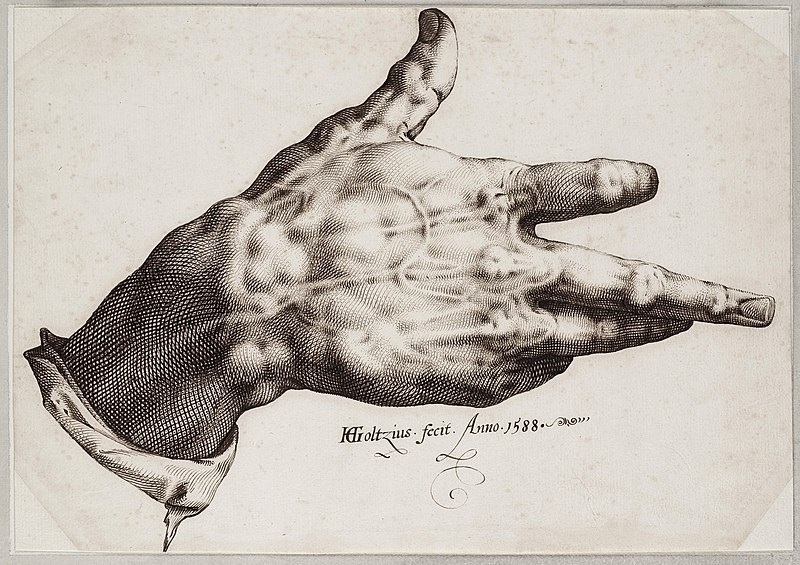 To solve his financial problems, 21-year-old Hendrick married a wealthy widow and adopted her son Jacob Matham, who later became an engraver and produced many pieces after his stepfather. This mésalliance allowed the artist to buy a house and open his own engraving workshop. Nevertheless, he sustained the marriage for ten years and then fled to Italy. It seems that his matrimonial situation got its’ clear manifestation in the series “Three Kinds of Marriages,” where the money marriage is officiated by Satan (fig. 7). Considering Goltzius’s tendency to emphasize sensuality in paintings and engravings, it seems that he was personally attracted to marriages of the first kind (fig. 6). In Italy, Goltzius traveled incognito and tried to find out what people thought about his work. After a year of traveling, the artist returned to the Dutch city Haarlem, where he initially moved to in the 1570s, and stayed there until his death of tuberculosis in 1617. 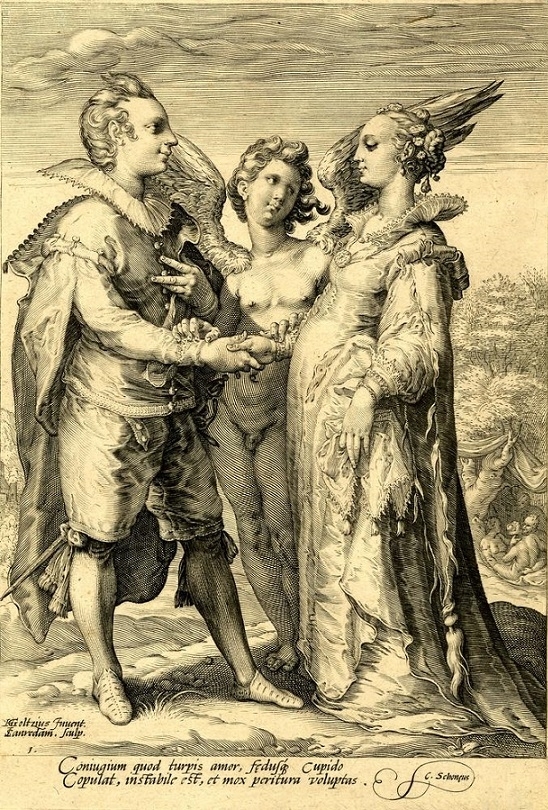 Fig. 6. “Three Kinds of Marriages” (c. 1595), the first marriage is officiated by Cupid (Lust). The lust is represented by two men and two women in the background at right. The Latin inscription reads as “the marriage caused by lust doesn’t last long” (britishmuseum.org) 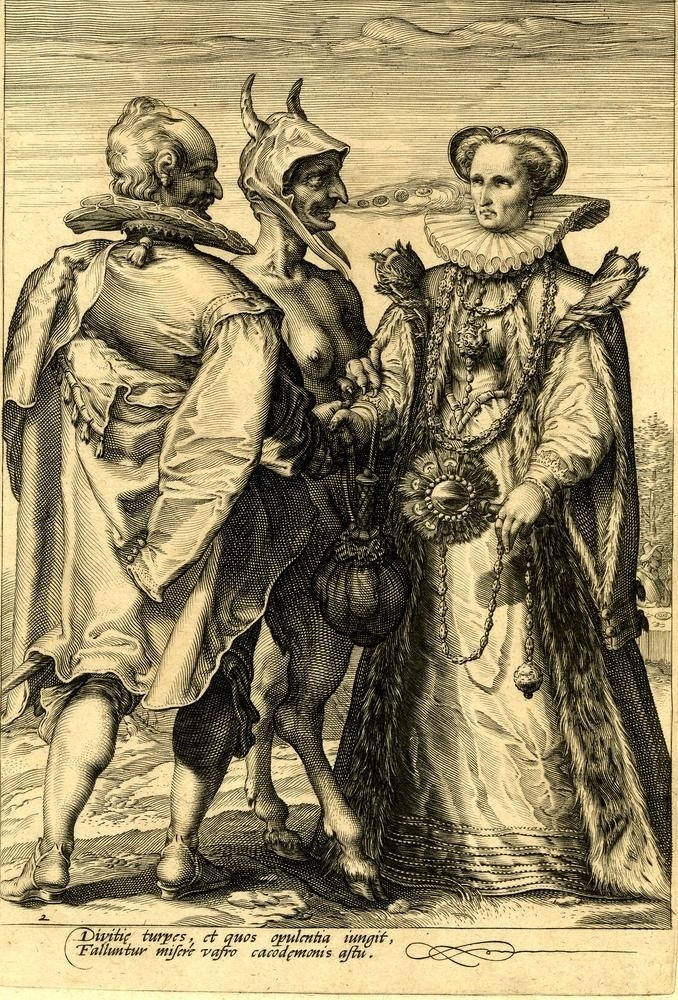 Fig. 7. The second kind of marriages, caused by wealth and officiated by Satan, with a man at the stuffed table in the background (britishmuseum.org) 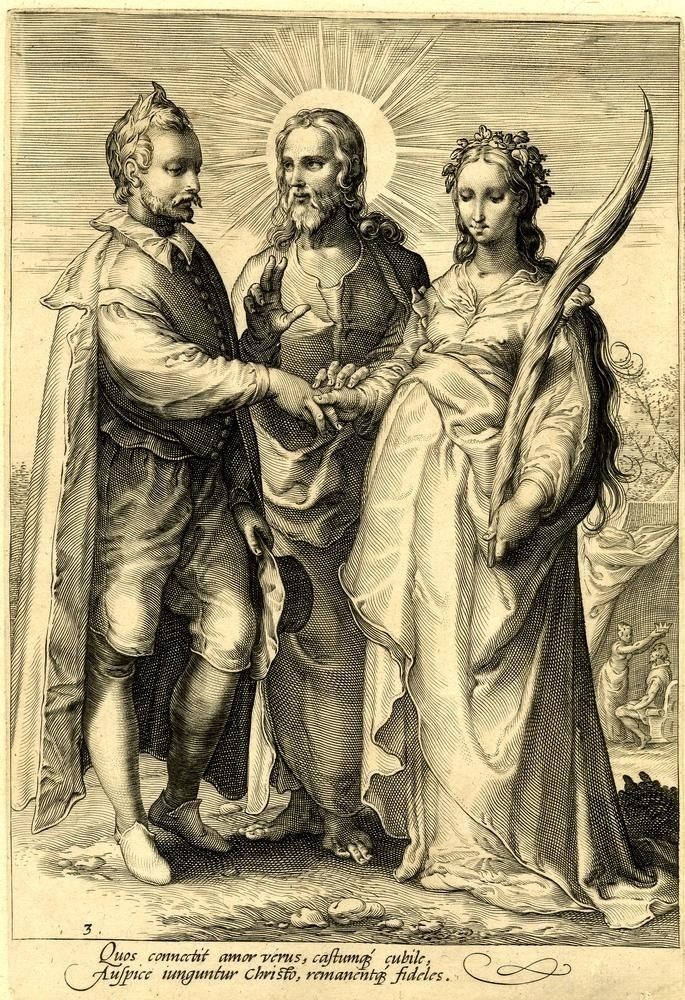 Fig. 8. The third kind of marriages, officiated by God (britishmuseum.org). Here we see a woman dressed in semi-transparent cloth (which would be more expected in fig. 5) with a palm branch symbolizing her chastity. The wife is crowning her husband in the background, the reference to the biblical statement that the chaste wife is a crown of her husband.

Ironically enough, Goltzius had chosen the words “Eer Boven Golt” (“honor is above gold”) as his motto in the 1600s, when he gained prominence, and his works were sought after. Another translation of this slogan is “the honor is on Golt[z].” 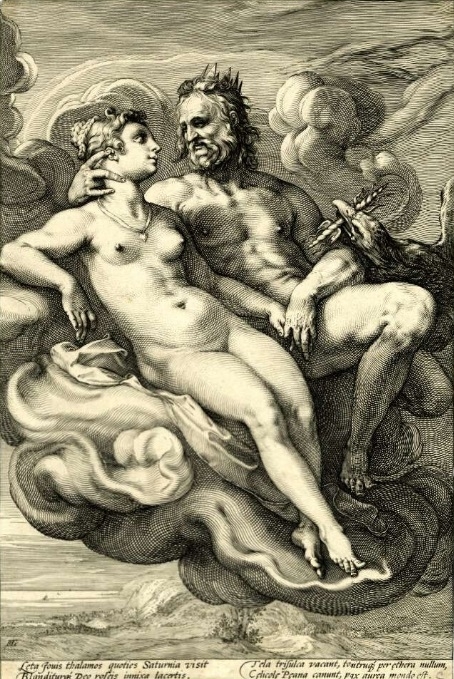 Fig. 9. “The Three Kingdoms of the World”, c. 1594. Jupiter and Juno reclining on the clouds (britishmuseum.org)

Fig. 10. “The Three Kingdoms of the World”, Neptune and Amphitrite (britishmuseum.org) 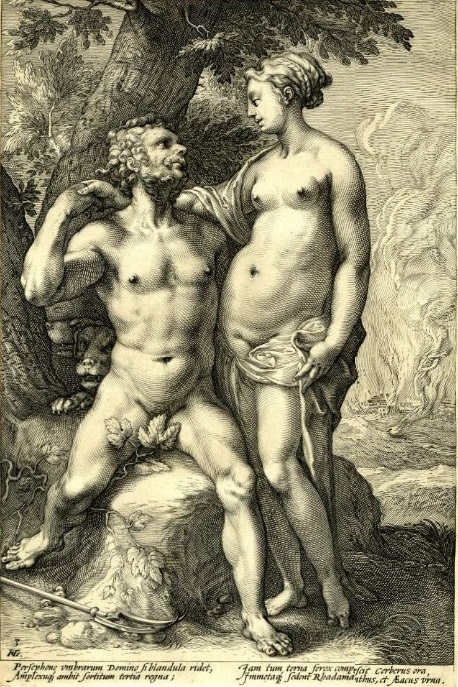 Fig. 11. “The Three Kingdoms of the World,” Pluto and Proserpine (britishmuseum.org) 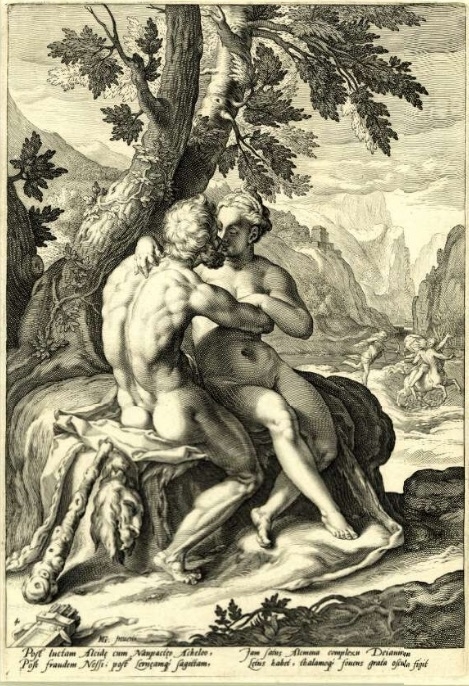 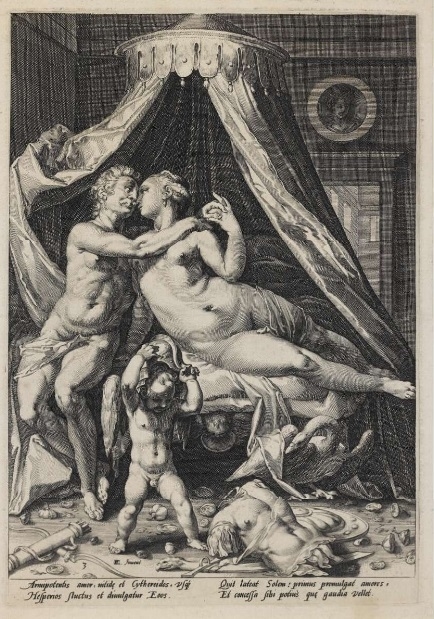 Fig. 13. Mars and Venus with Cupid trying to wear a helmet, 1590 (britishmuseum.org) 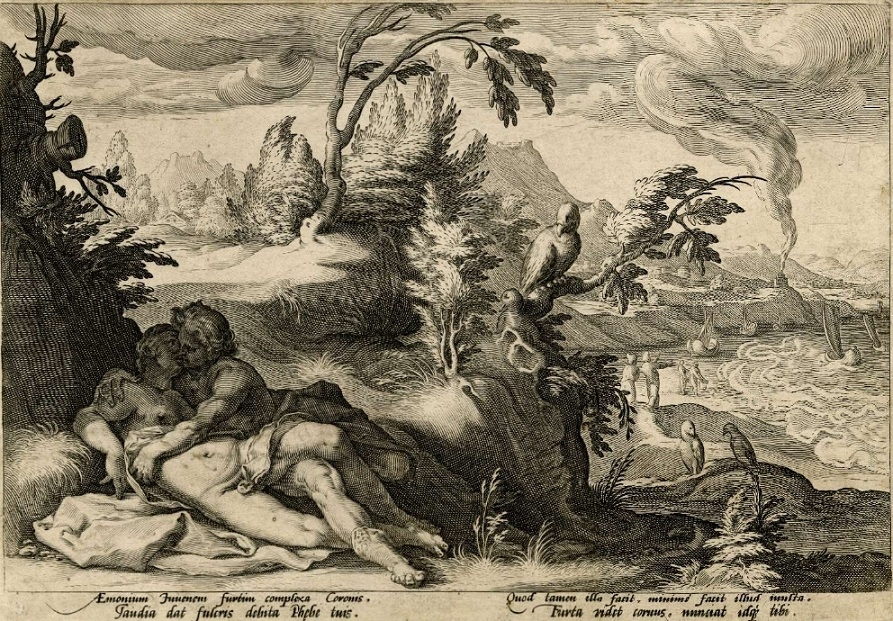 Fig. 14. Apollo and Coronis (a Thessalian princess,gave birth to the god of medicine Asclepius), 1590 (britishmuseum.org) 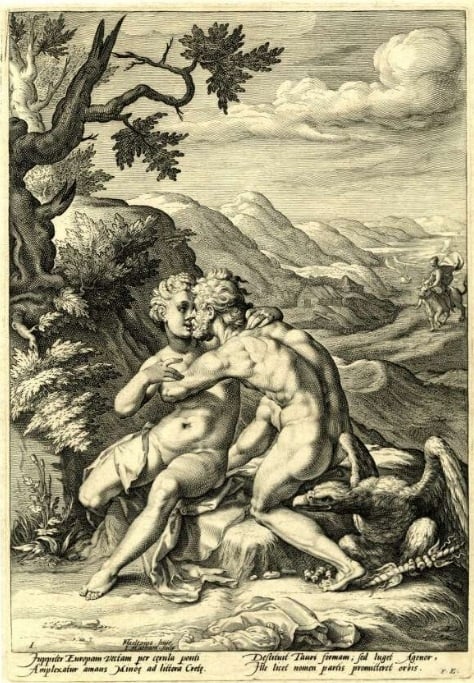 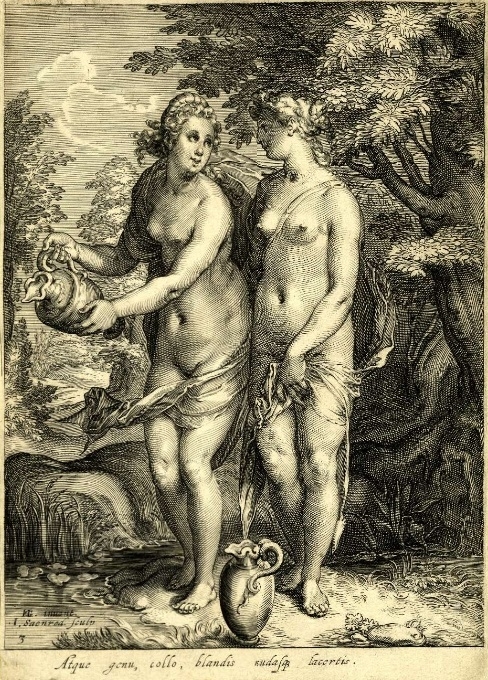 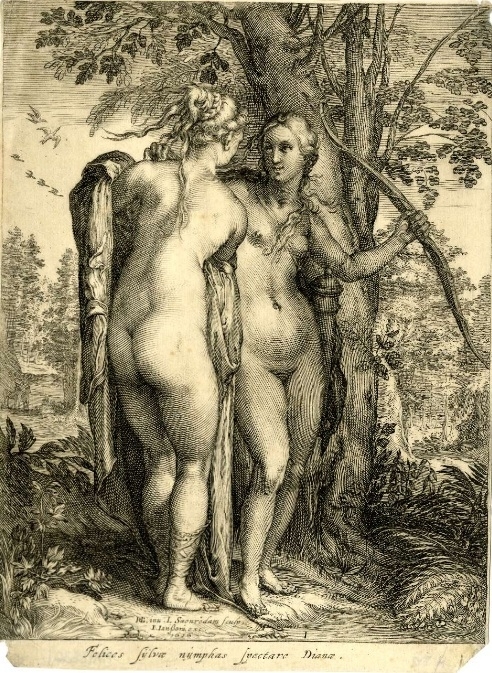 Everything as a Woman

The motif that catches our attention when we look at the oeuvres by Goltzius is the persistent presence of a naked or covered in transparent clothes female body. The most unexpected figures represented by females are angels of the Old and New Testament (fig. 18, 19). To look at their obviously female appearance with see-through clothes and breasts is a pretty remarkable experience considering the paternalistic nature of the Bible. Another striking feature is the usage of traditional pagan images in a biblical context. Thus, Goltzius depicted the third day of creation, when God created the sea and the land, with the widespread personification of the water and the ground as a pair of female and male characters, implying a certain degree of eroticism (fig. 21). 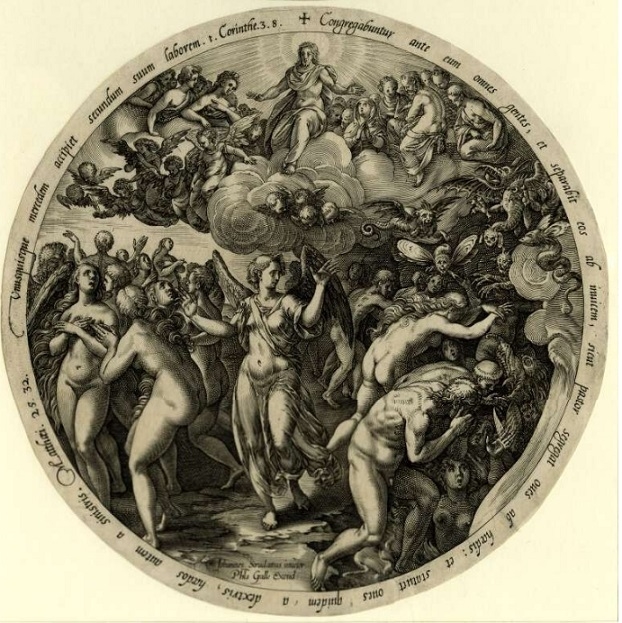 Fig. 18. The Last Judgment, c. 1577, Christ sits in glory above; below an angel raises her arms and segregates the good (at left) from the evil (at right), britishmuseum.org 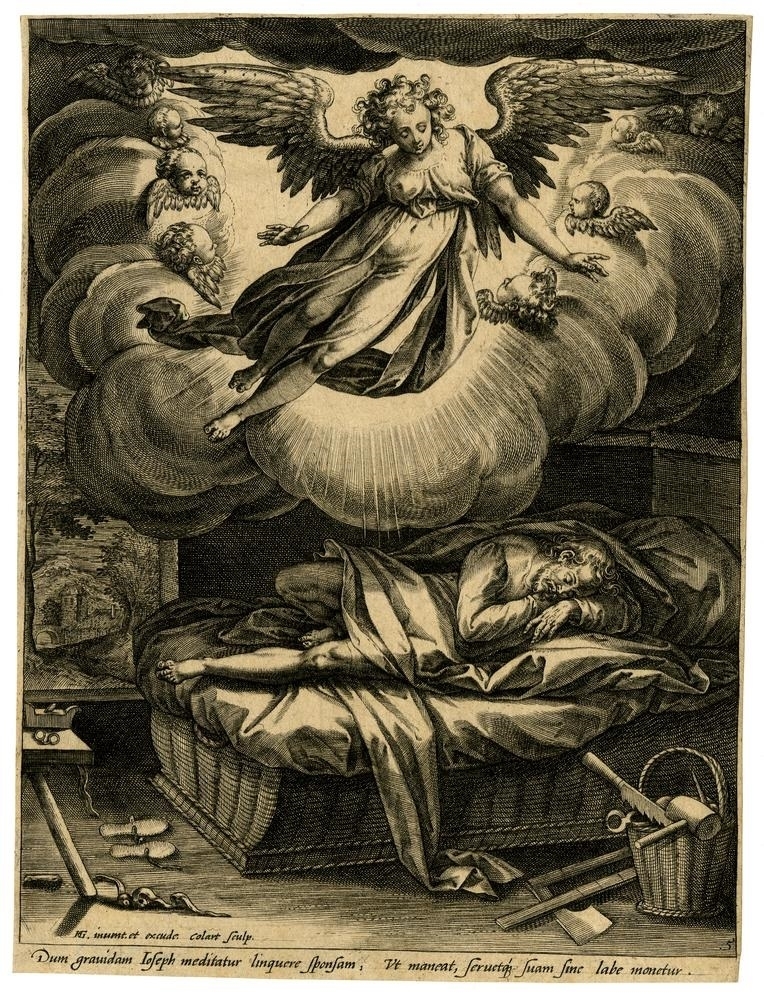 Fig. 19. The annunciation to Joseph. An angel surrounded by cherubs in a cloud at top, St Joseph sleeping on a bed at bottom, carpentry tools in the foreground; the print made after Goltzius (britishmuseum.org) 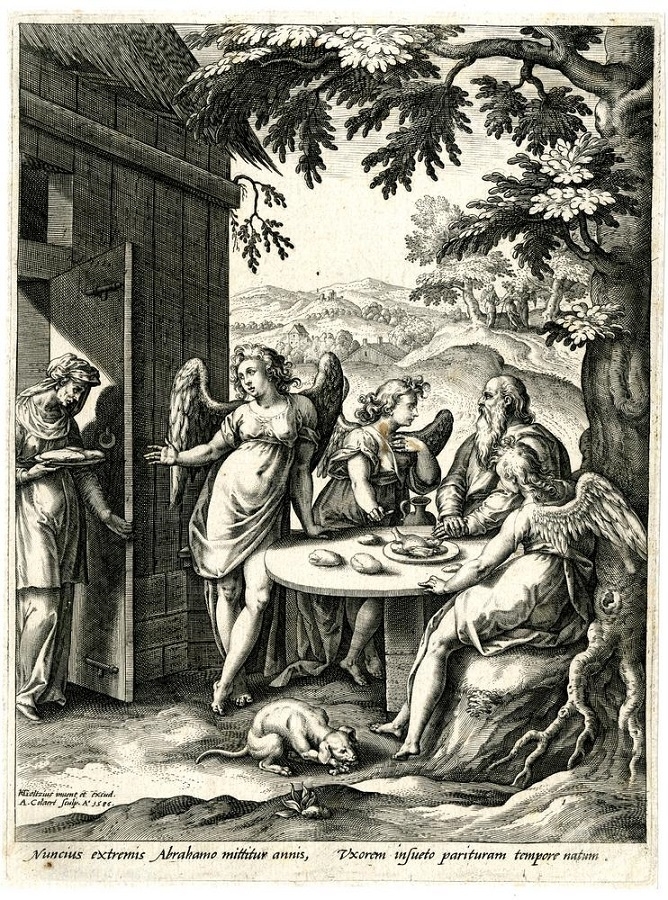 Fig. 20. The annunciation of Isaac’s birth to Abraham. Three angels at a table with Abraham at right, a servant coming through a door at left, a dog in the foreground, 1586 (britishmuseum.org) 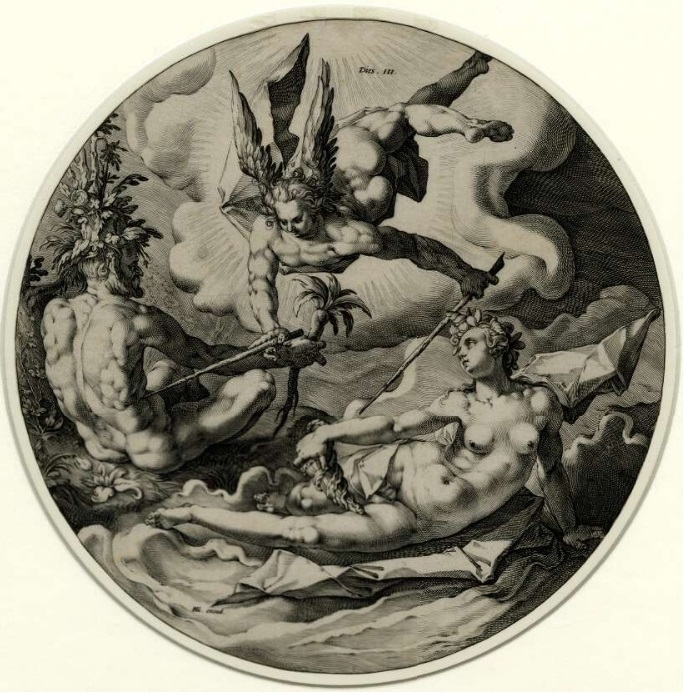 Fig. 21. The third day of creation with the androgyne-looking god (britishmuseum.org)

The Lost Art of Elegant Allegories 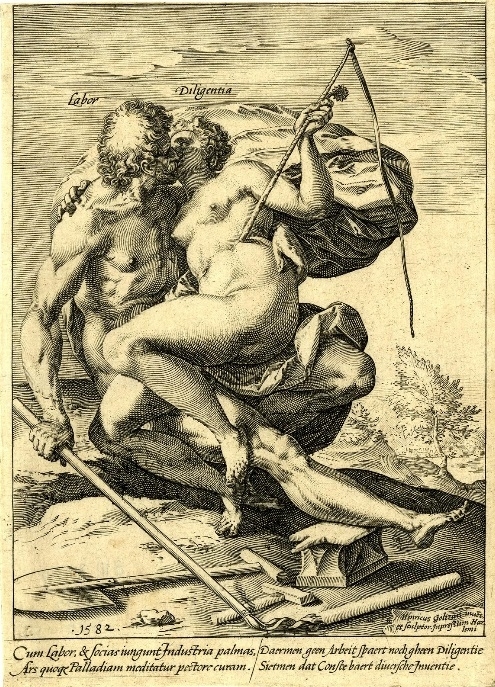 Fig. 22. “The Ways of Fortune, ” Labor (man) and Industry (woman), she holds a whip and a spur while he holds a flail; a spade, anvil and hammer lie on the ground. 1582 (britishmuseum.org) 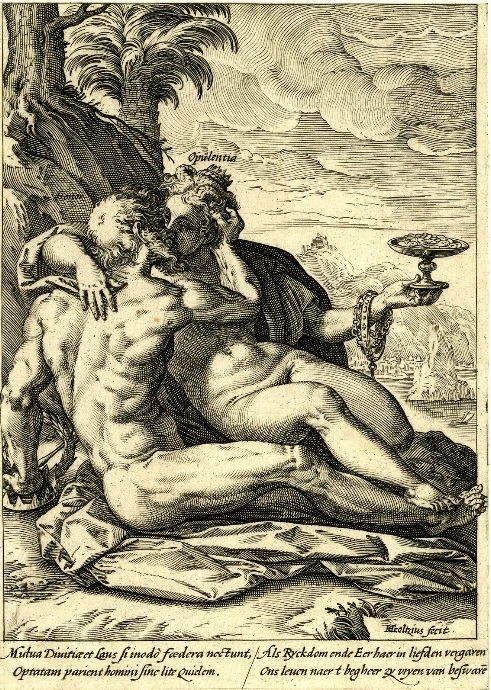 Fig. 23. “The Ways of Fortune,” Honor (man) and Wealth (woman), Honour rests his hand on a laurel, crown and sceptre as she holds up a vessel containing coins and has an elaborate bracelet / collar around her wrist; 1582 (britishmuseum.org) 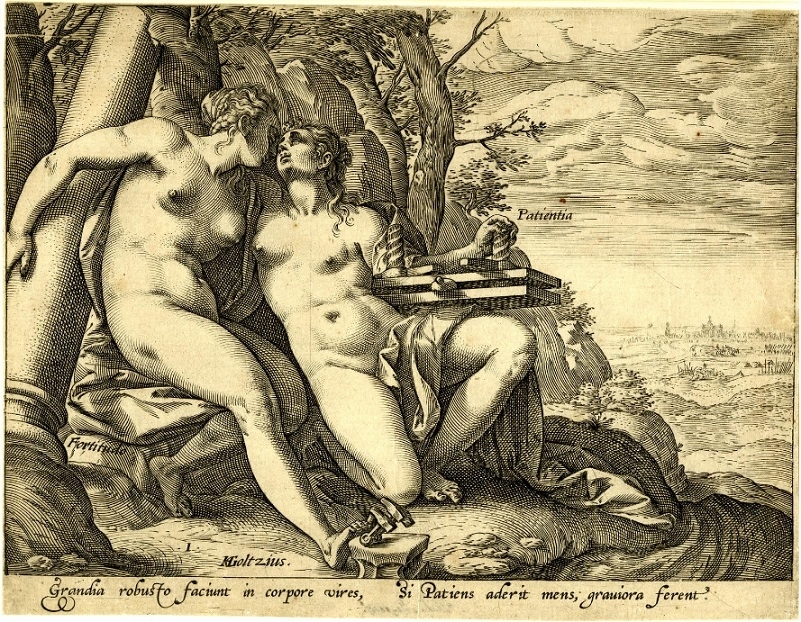 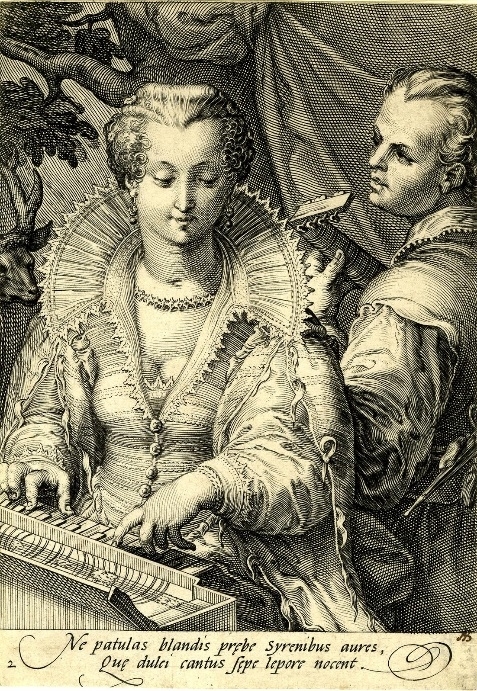 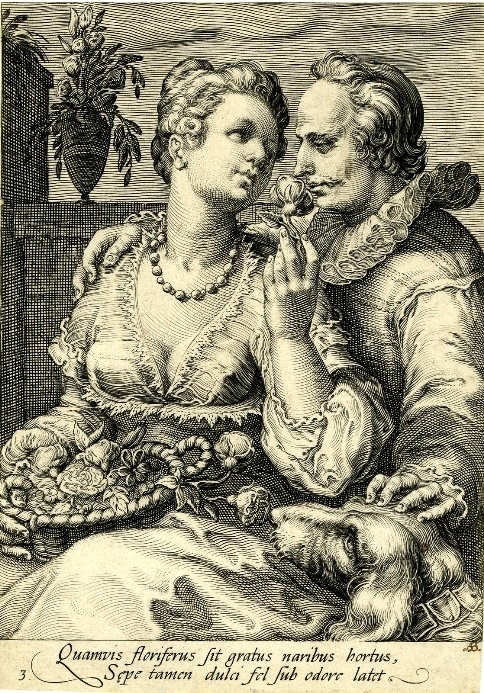 Fig. 26. “Five Senses,” Smell, the additional symbol is a dog; text reads: “Although a flower-filled garden is pleasing to the nose, bitterness is often hidden beneath the sweet fragrance.” (britishmuseum.org) 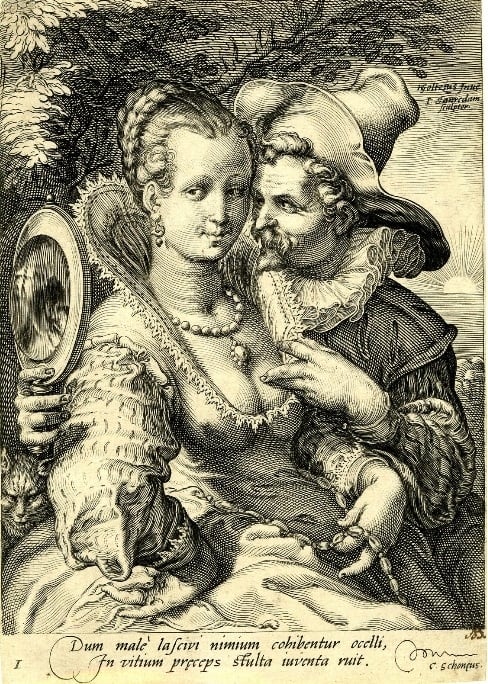 Fig. 27. “Five Senses,” Sight, a man presents jewelry to a woman, the additional symbol is the sun (britishmusem.org) 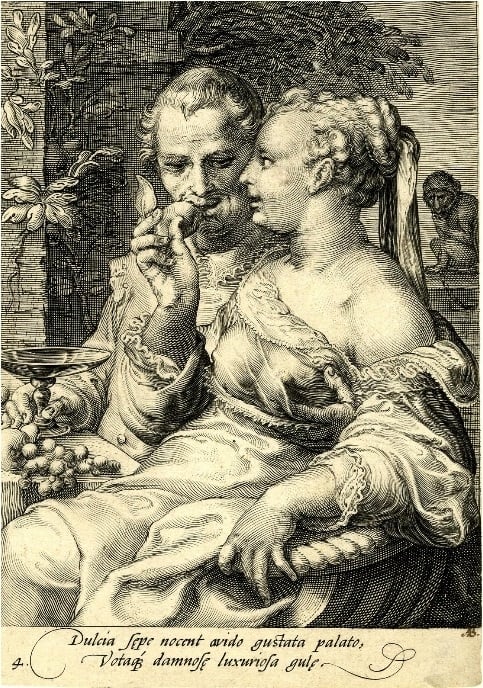 Fig. 28. “Five Senses,” Taste; a woman feeds her partner a fruit, he fondles her breast, the additional symbol is a monkey, which also often represents the sin. The text reads “Sweet things are often harmful when tasted with a greedy palate and with the wanton pleasures of damnable gluttony” (britishmuseum.org) 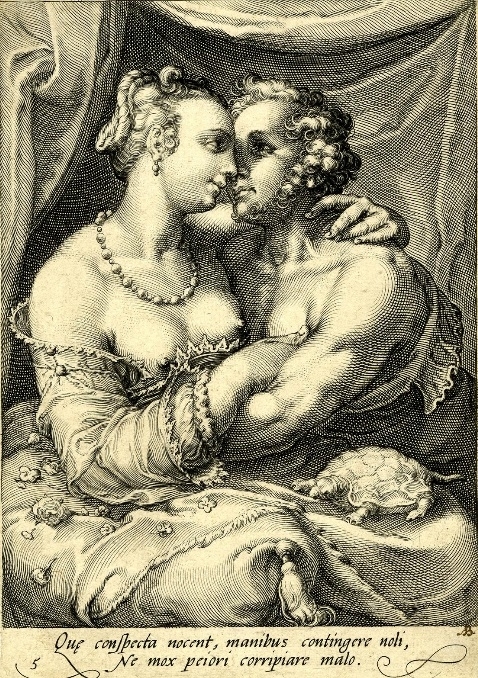 Fig. 29. “Five Senses,” Touch, additional symbol is a tortoise (maybe, as a sign of deliberation), 1595. The inscription reads “Do not grasp in your hands those things which are harmful, once you have seen them, in case you are soon seized by a worse evil” (britishmuseum.org) 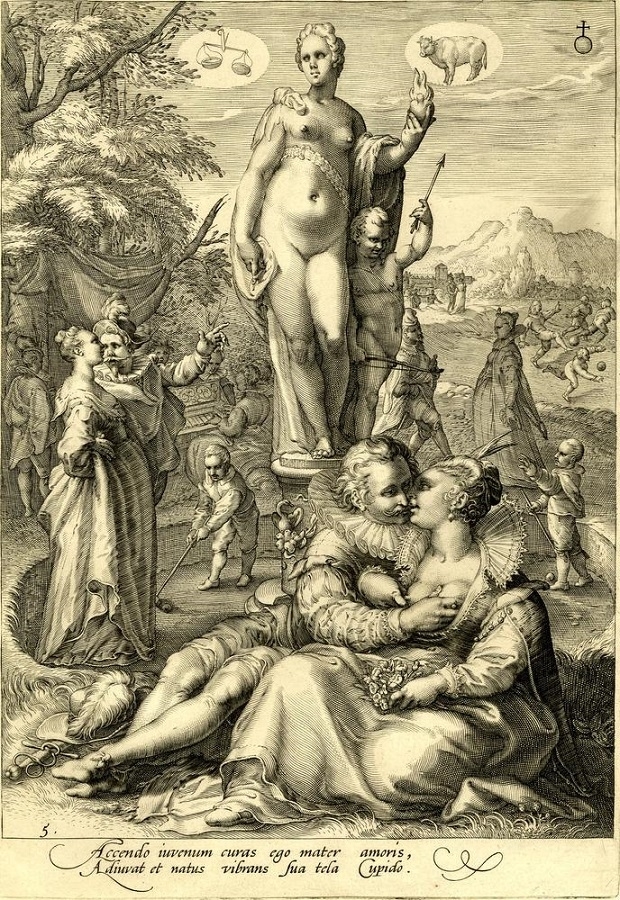 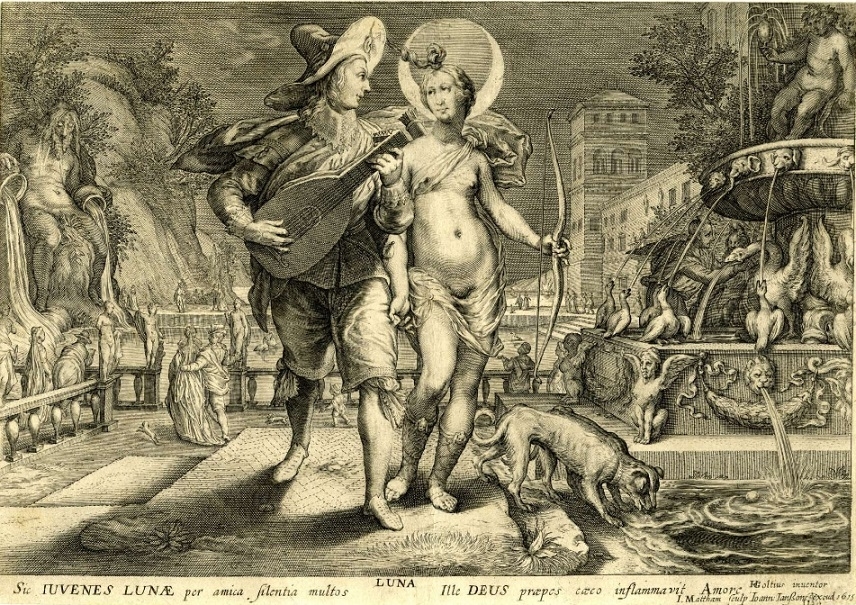 Let us know your thoughts on the sensual baroque art of Hendrick Goltzius in the comment box below…!!