The Peak of Seductive Pictorialism in Photography of Anne Brigman

In some of our articles, we spoke of the principles of pictorialist photography, but we didn’t pay attention solely to this phenomenon. American photographer Anne Brigman (1869-1950) provided us with outstanding examples of this genre. The artist depicted nude women as ancient nymphs and sea-maids. She did it in such a way that her works looked rather like preraphaelite paintings than photographs.

Brigman was the oldest of eight children in a family of English missionaries in Hawaii. When she was sixteen, the family moved to California. In 1894, she married sea captain Martin Brigman, which later allowed her to visit Hawaii when she accompanied her husband on several voyages to the South. Allegedly, during the journey, Brigman injured herself and had to remove one of her breasts afterward. For this reason or another, she stopped traveling by 1900 and settled down in Oakland, California. Ten years later, the couple separated, and Brigman lived in a cabin in San Francisco. Despite constrained conditions, she was s well-known person in a local bohemian community and became acquainted with Jack London and poet Charles Keeler. 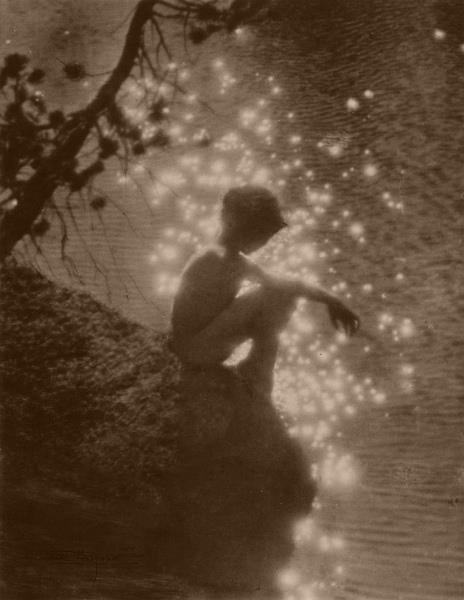 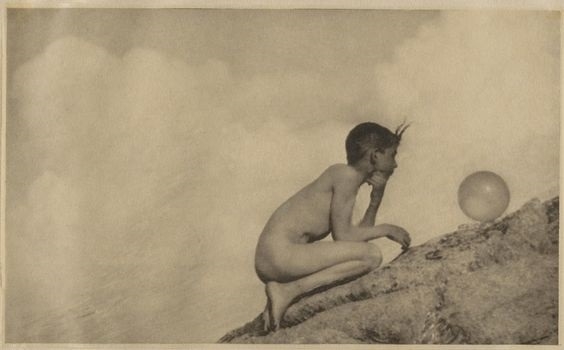 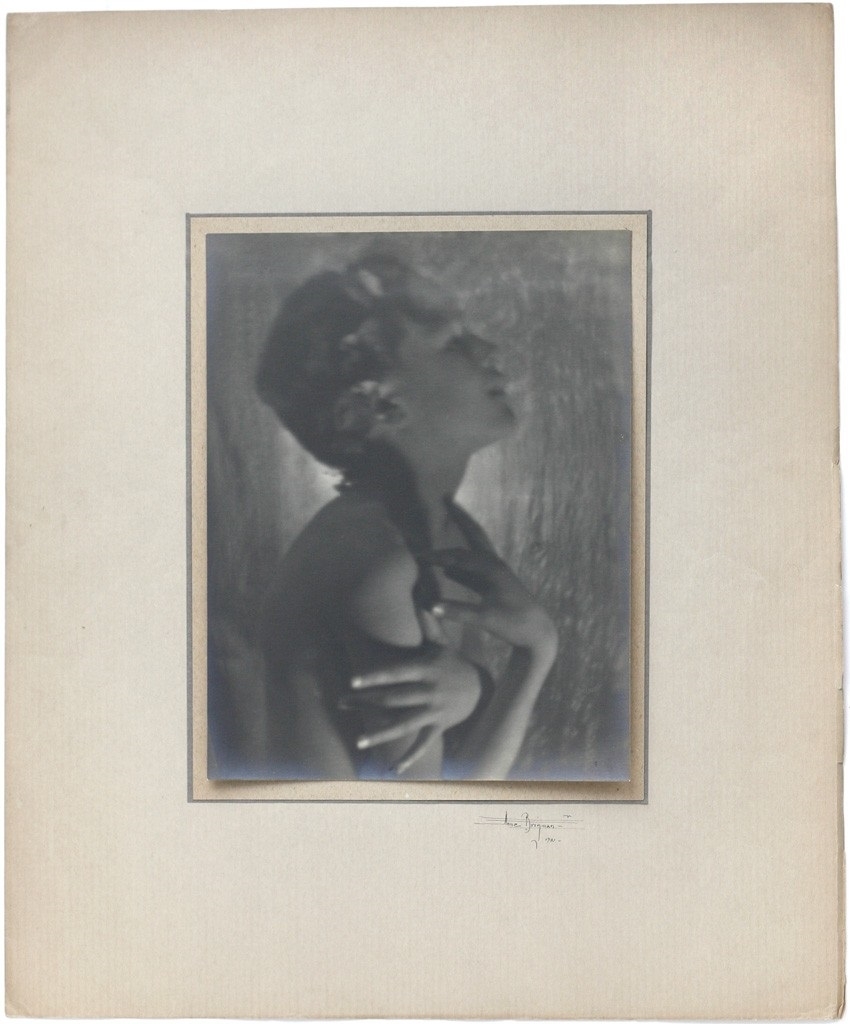 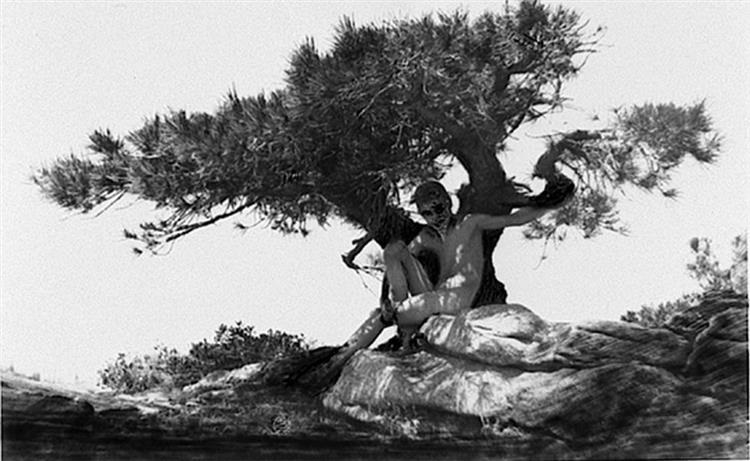 Fig. 6. Satyr under a tree (wikiart.org)

The Career of a Photographer

Unlike Edward Weston or other early geniuses who began photographing as teenagers, Brigman tried out this way of artistic self-expression in her thirties. In the space of two years, she gained a reputation as a skillful pictorialist. The first exhibition happened in 1902 at San Francisco’s Second Photographic Salon. Becoming an acknowledged photographer, Brigman opened a workshop in Berkeley in 1903. Her works often appeared in the periodicals, and the number of exhibitions was increasing. In 1907, in the sixth year of her career, Brigman achieved the status of a celebrity. She was a sought illustrator, e. g. she accomplished eight pictures for William E. Henley’s poem I Am the Captain of My Soul. Along with the artistic activity, Brigman never stopped organizing meetings for a bohemian circle, so-called “artistic teas,” where painters, poets, and musicians could communicate. 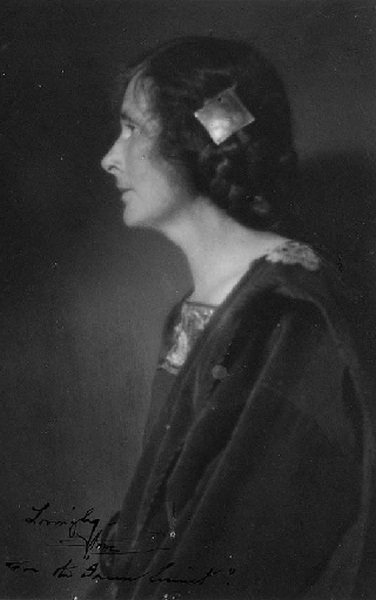 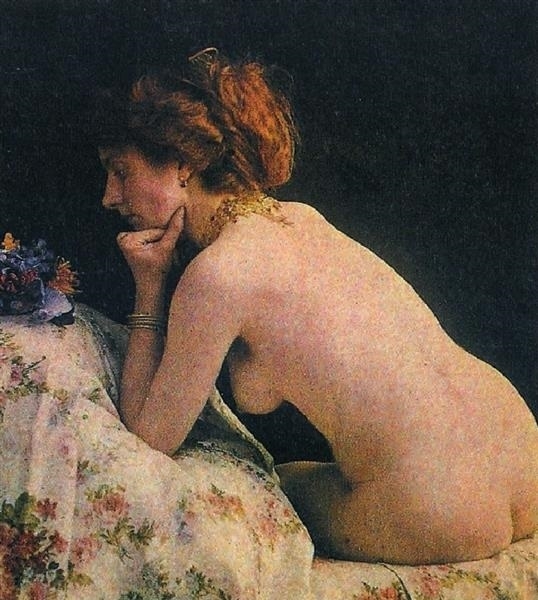 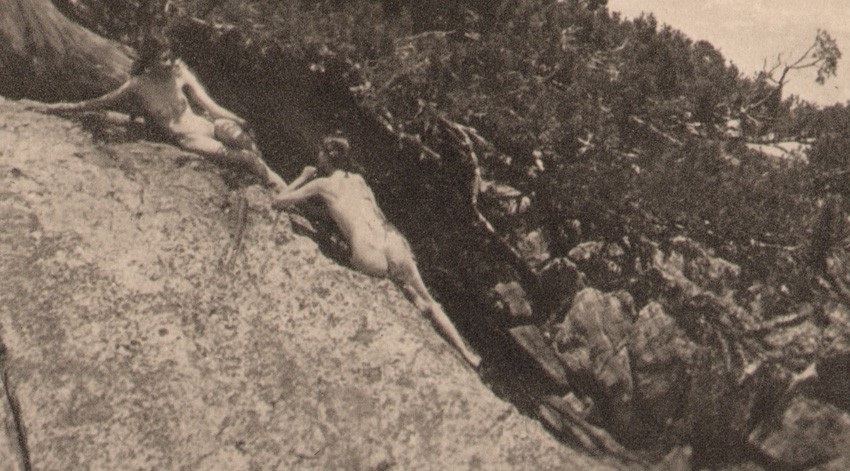 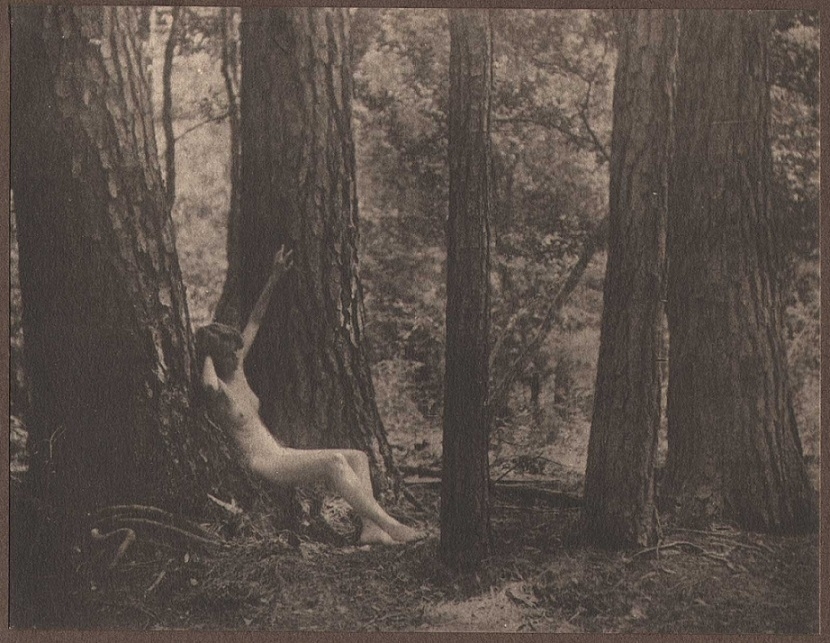 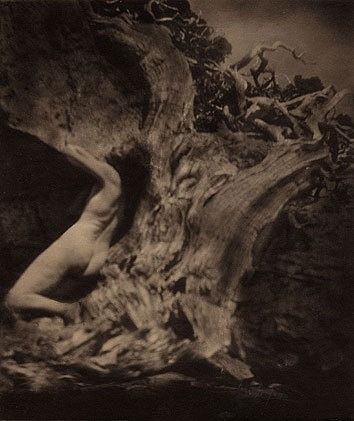 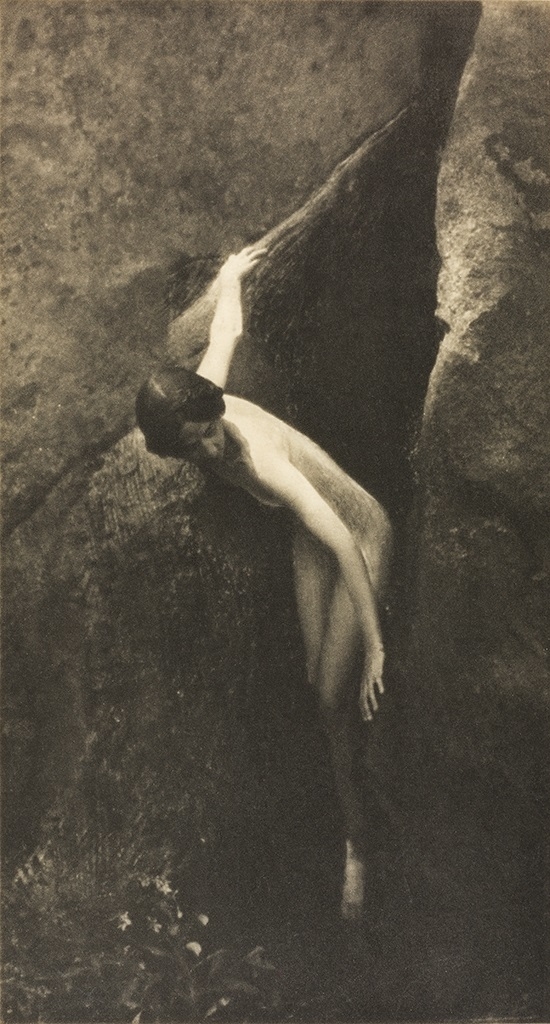 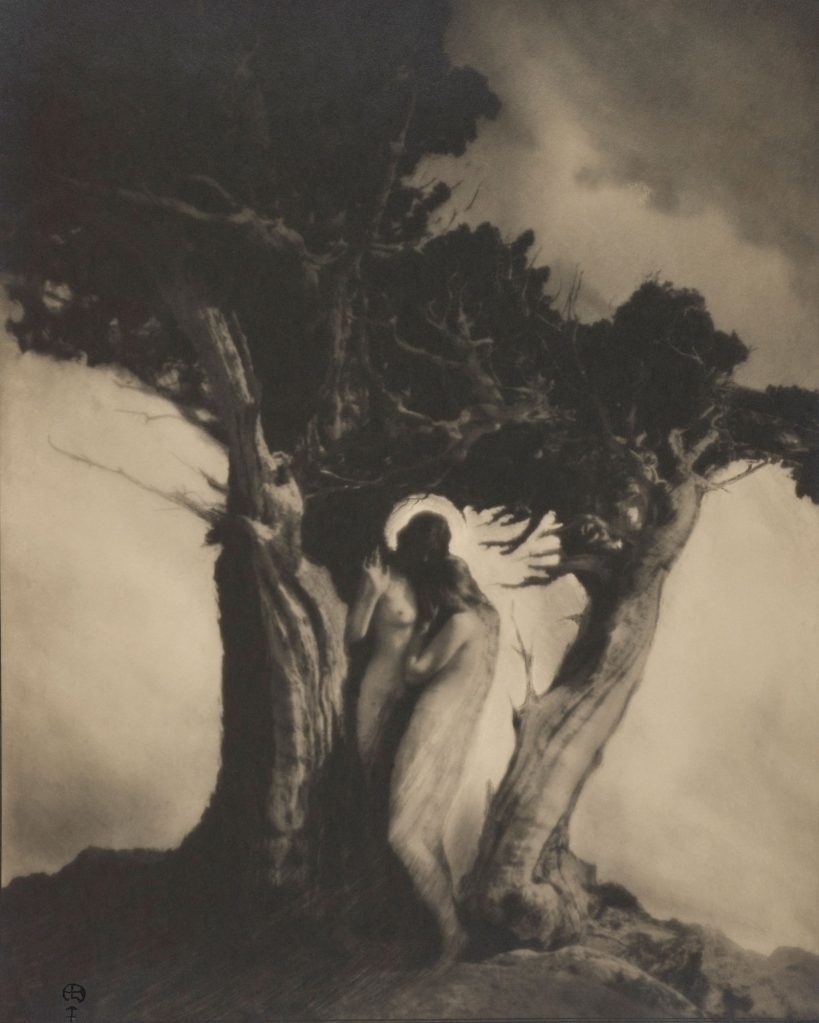 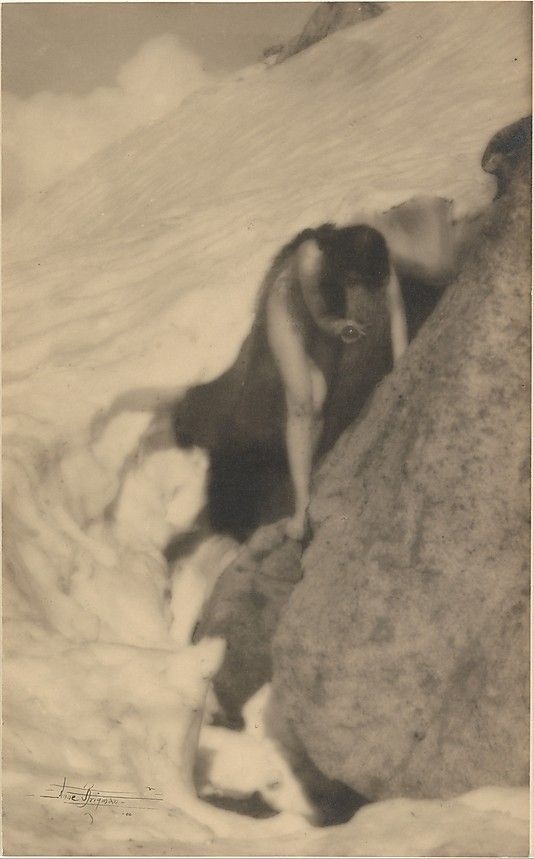 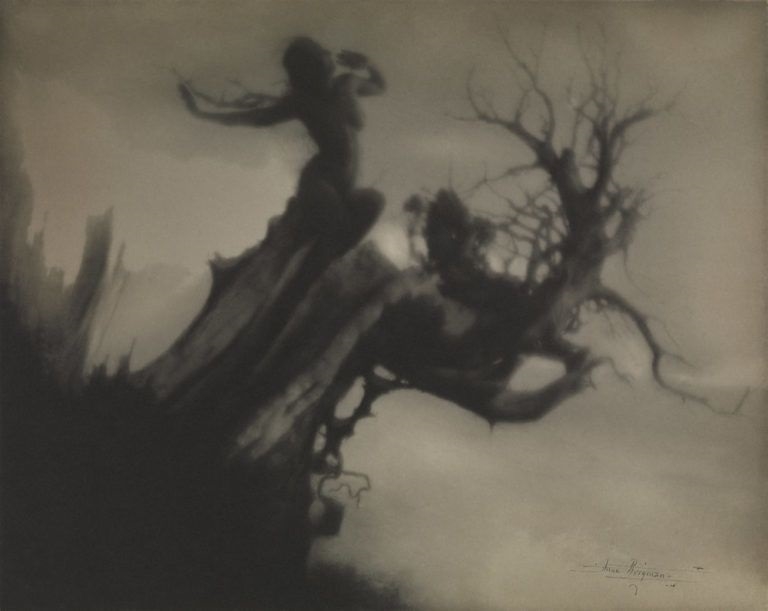 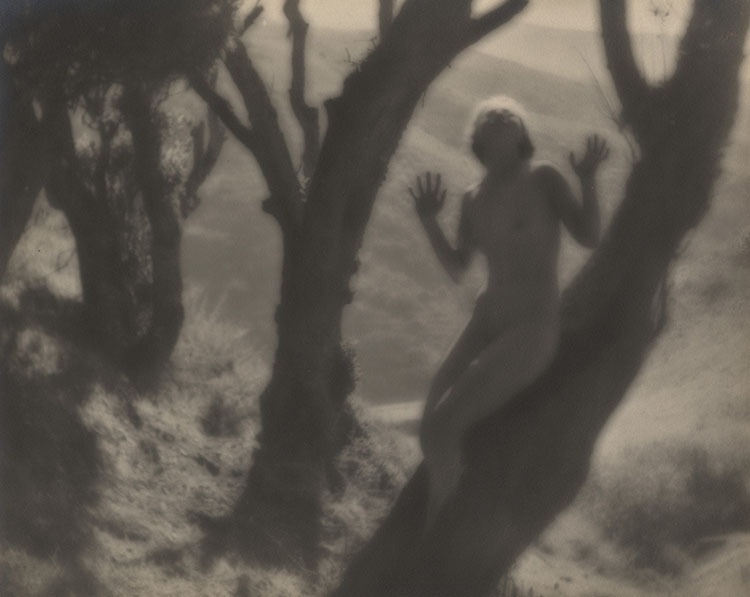 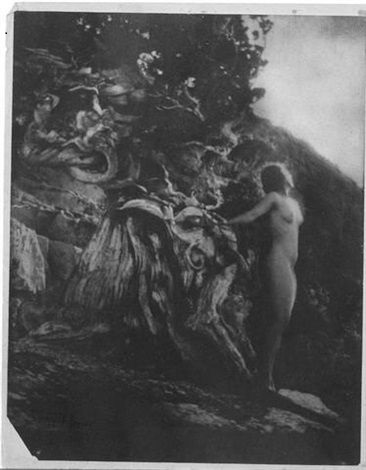 Though Brigman attained the respect of professionals and became a fellow of the Photo-Secession in 1908, it didn’t prevent the public from feeling offended by Brigman’s pictorial nudes. Her undraped nude entitled The Soul of the Blasted Pine (self-portrait) was criticized and labeled vulgar and pornographic. Eventually, Brigman withdrew the image from the exposition. Yet, it was the photograph that received a silver medal from the Birmingham Photographic Society. 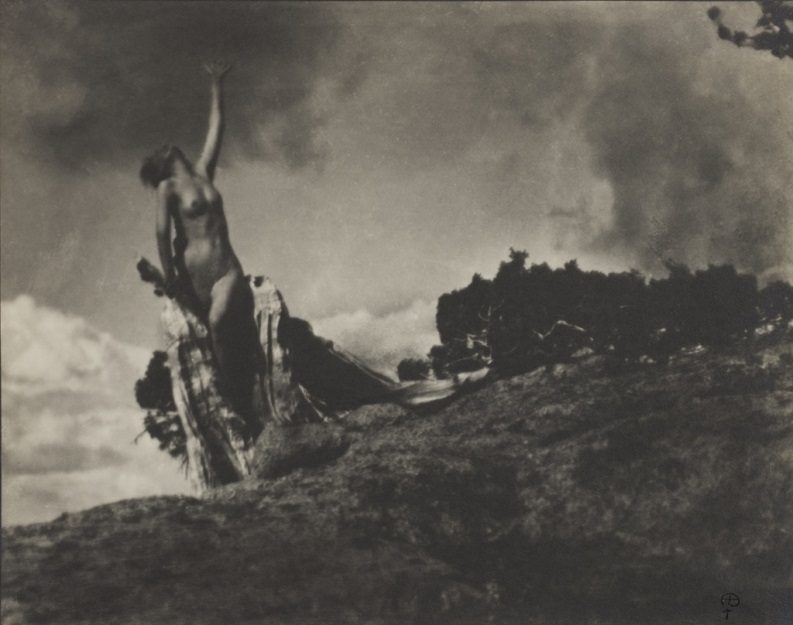 The adventurous character of Brigman didn’t let her stay on a photographer’s path. Apart from being a model for her works, lecturer, and speaker at photography symposia, she manifested herself as an actress, performing in a play by her friend Charles Keeler. In the 1920s, she studied etching and combined it with making photographs and conducting solo exhibitions. While living in Los Angeles in 1940, Brigman used an opportunity to show her talents as a writer. Earlier she was accepted in the Poets ‘Guild and the Writers‘ Market League at Long Beach, California. There she returned in the 1940s and performed at the League her prose Deepwater Ships that Pass. Already in the thirties, she had to leave professional photography due to sight problems, but it didn’t stop her creativity. Brigman took up creative writing classes and published a book of poetry, Songs of a Pagan, illustrated with her photographs. 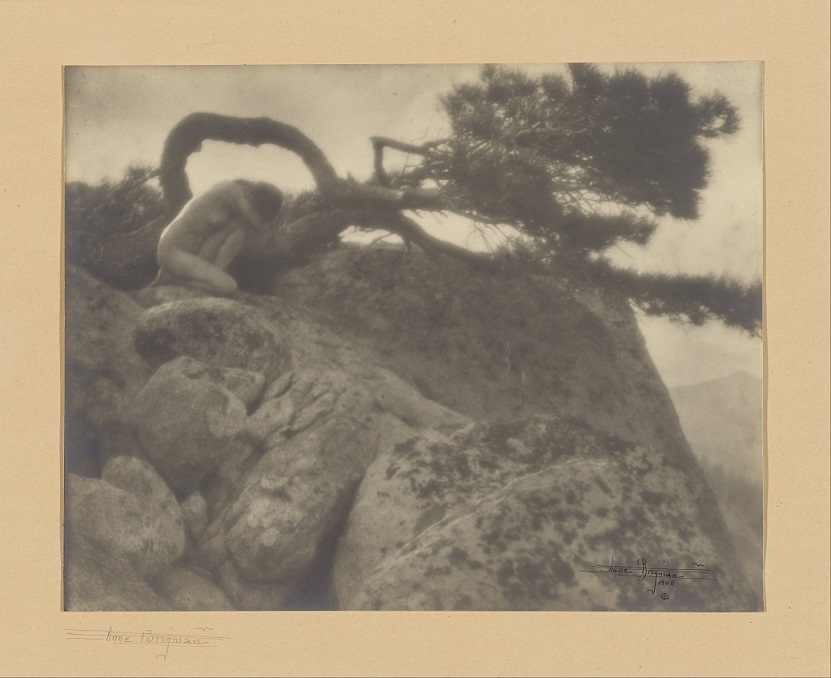 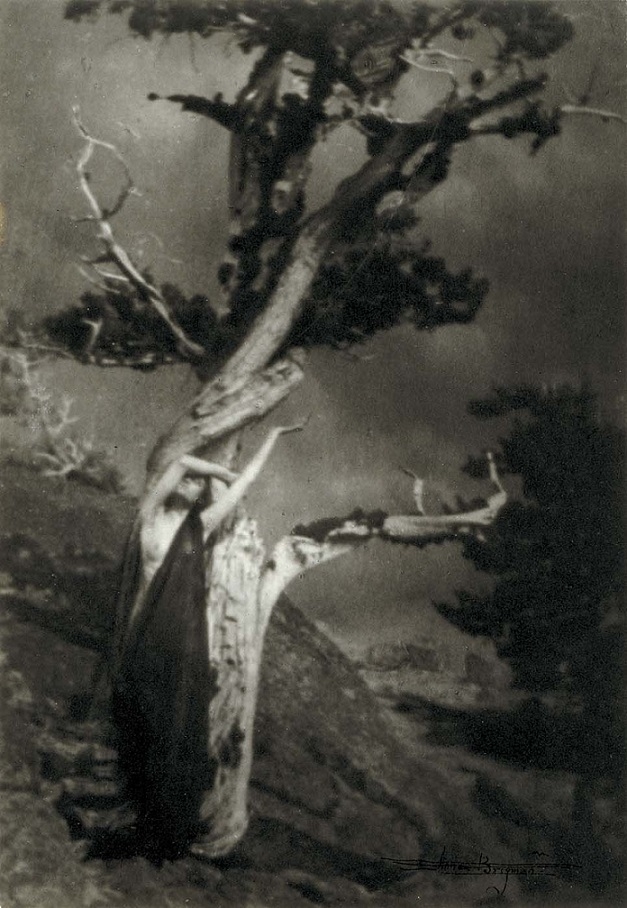 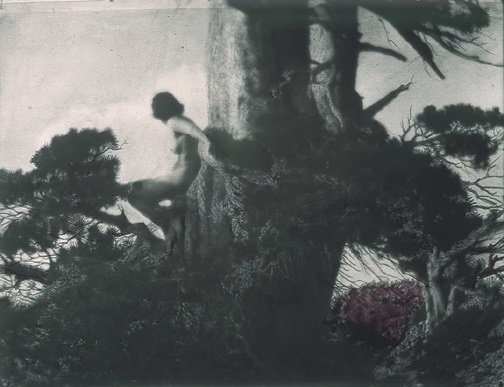 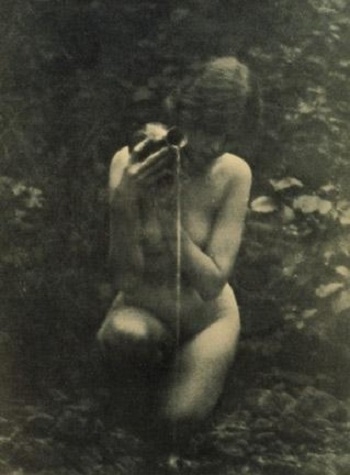 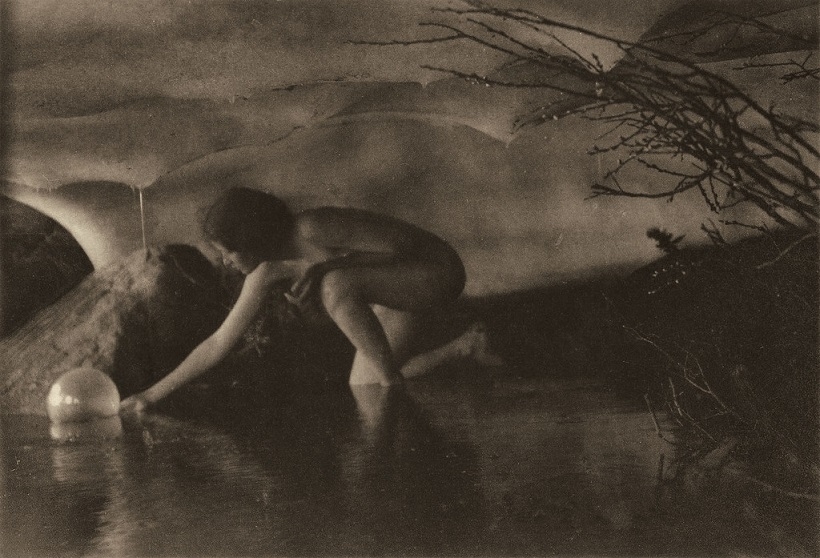 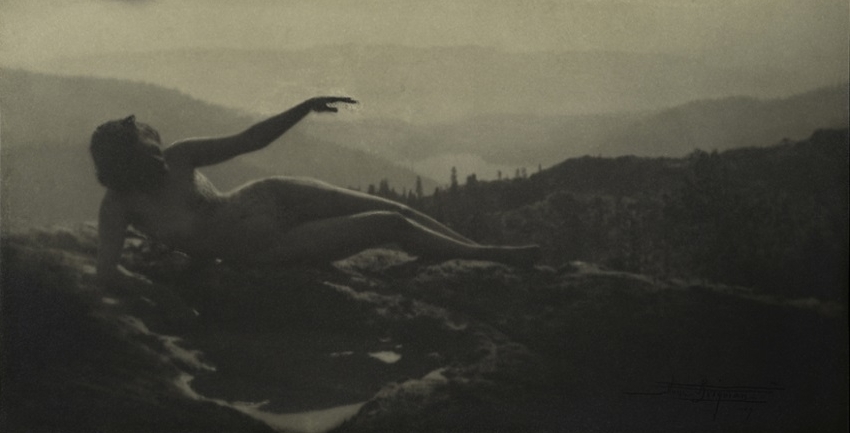 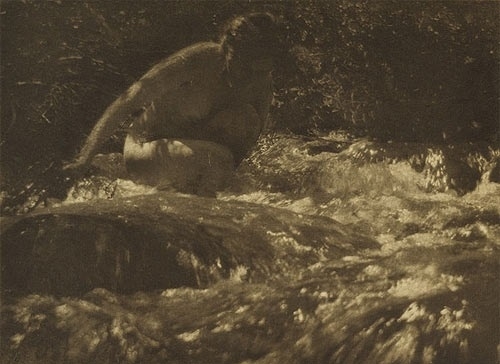 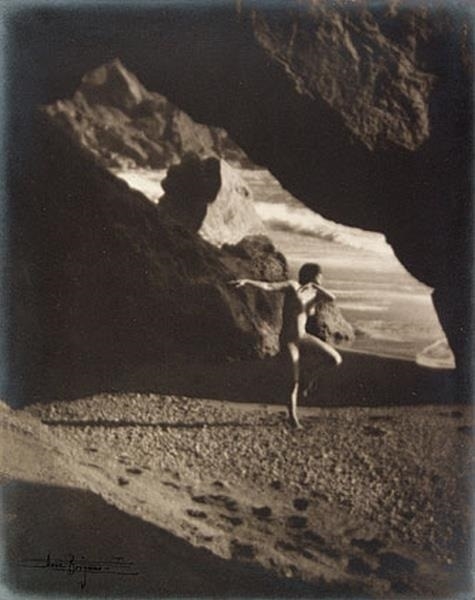 Unseen (from Songs of a Pagan)

What was it stirred the bough?
There was no breath of wind!
Why did the aspens tremble
In the quiet of sunset?

Was it the shadow of trees
That slipped softly
Over the hill
Into the canyon?

Why did the slim, young moon
Shine as of minted silver
And the little, red foxes
Bark from their coverts?

Then I knew…
In the scent of the wild rose
Knew in the delicate perfume
Flooding the trail
That Beauty was passing…
Diana… the lovely and swift
With her lean, grey, phantom hounds.

Click HERE for an article on the female body as a landscape of Edward Weston….!!

Let s know your thoughts on the work of Anne Brigman in the comment box below…!!

Stunning work! Thank you for sharing and bringing into the light another genious. Fig. 5 is breathtaking! The contrast between the elements in her work is truly unique. Earth, water, air, wood are all set ablaze by the staged female shape, her fire, delicately ragging. I'm left wondering: how much did she work with color, with only one color photo present. To label any of her work pornography, must have been more than a stretch of the imagination, even back then. She probably didn't, but if she had photographed couples engaged in sexual activity, I can just imagine how poetic and gentle they would have been portraid. And the prudes of the time would most likely happily had burned her at the stake! Off to internet-scavenging for her work now, find some books. The Shunga Gallery is going to end up ruining me!

Thank you for the response! I like her little satyrs very much. But even more, I like her vitality and flexibility as she wasn't bounded by one art form and started writing after giving up photography. Yep, we're here to ruin you completely, there's no salvation!

Love this feature! This lady was an adventuress, going where angel's fear to tread! What is it with censorship 0f so called pornography? It's the uneducated calling the shots. They did it for Manet in 1863. His 'Lunch On The Grass' was lambasted, little did his censors know that he'd studied classical art to get his ideas? Oh boy, didn't we get it in the UK from a dear lady called Mrs Whitehouse? But it backfired on her, a magazine was published called...wait for it: Whitehouse. It was fun. The worst pornography today concerns esteemed members of society who, for instance, line their pockets with obscene amounts of money obtained legally perhaps, but should have been refused. (Clue, an ex UK PM) Let's hope those with the blue pencil poised never come across, for example, the many drawings & sketches of August Renoir!

It happens every time. An artist must have angelic patience to tolerate an audience of this kind.