The theme of the vast majority of the watercolors were what one could call ‘enema-fetish (klismaphilia)’ and based on the lingerie, clothes, and hairstyles of the women involved it was reasonable to say they were done sometime near the end of the Weimar Republic. In other words, early 1930’s, Germany. But, what caught my attention, aside from the obvious taboo subject matter and Delcourt’s curious focus on such a singular fetish, was Delcourt’s disappearance. Julie Delcourt signs only two of her drawings and the rest of her work temporarily vanishes. It also changes. She begins to create propaganda postcards for the Nazi regime. Her postcards illustrate women working (the majority of the men are off fighting) in a wide range of jobs ranging from the building of war planes (like Rosie the Riveter in the US) to nursing to serving German soldiers hot soup in a cafeteria. The watercolor technique is stylized and the women’s faces are pretty. Typically, their smiles are modest, rouged, and express glee or merriment or the look is serious and attentive at the task at hand. Their faces can look pleasant and/or serious. There is also a hint of secret desire suggested in the subtle way the the women’s bodies are positioned: a leg crossed at a desk showing a wide patch of hip; pleasant and cheerful smiles expressing an eager desire to please, or an arm reaches up and the curve of a breast is discreetly exposed (Fig.3). 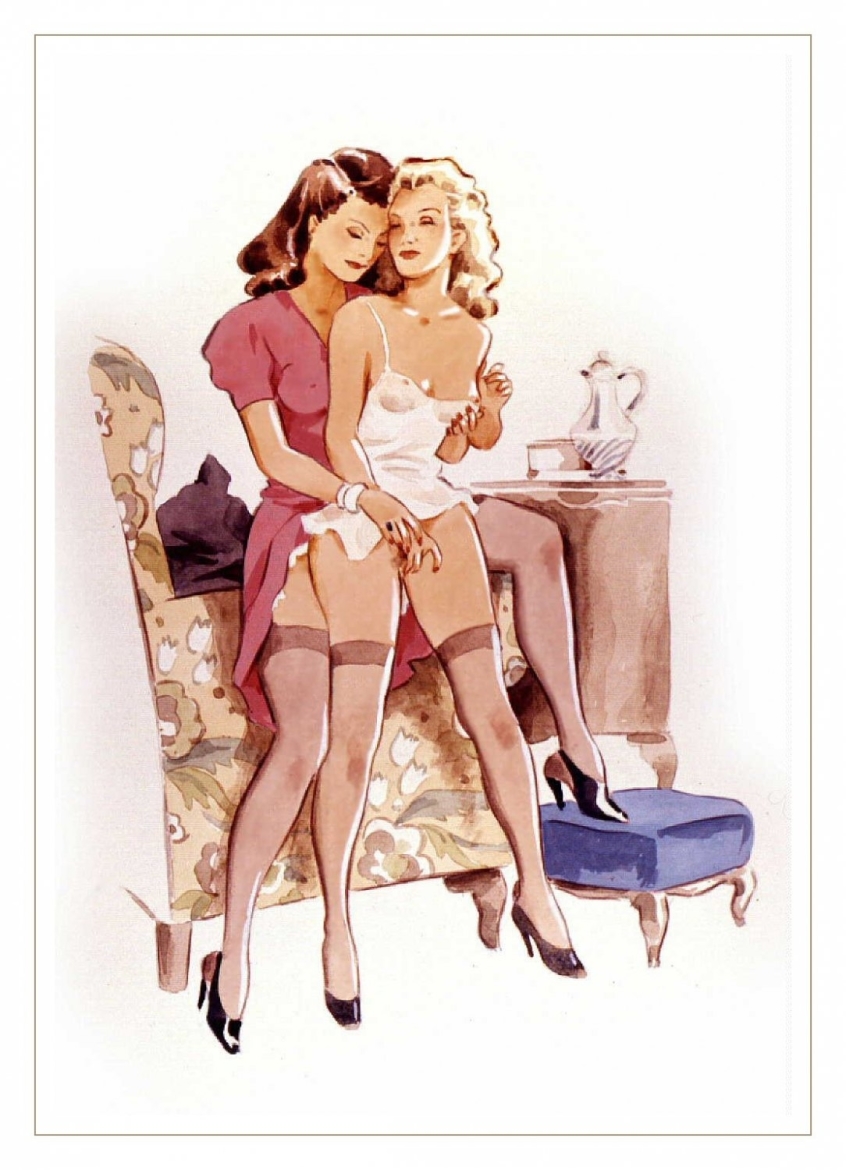 The women are well-dressed if not modestly and physically always well- proportioned: narrow hips, elegant nyloned curved legs in heels (Fig.4), small balanced breasts, hair nicely done, and they are all painted with an idealized pretty face, a gleam in each eye. You need to pay attention to catch all of the subtle eroticism in the patriotic ‘working girl’ postcards. 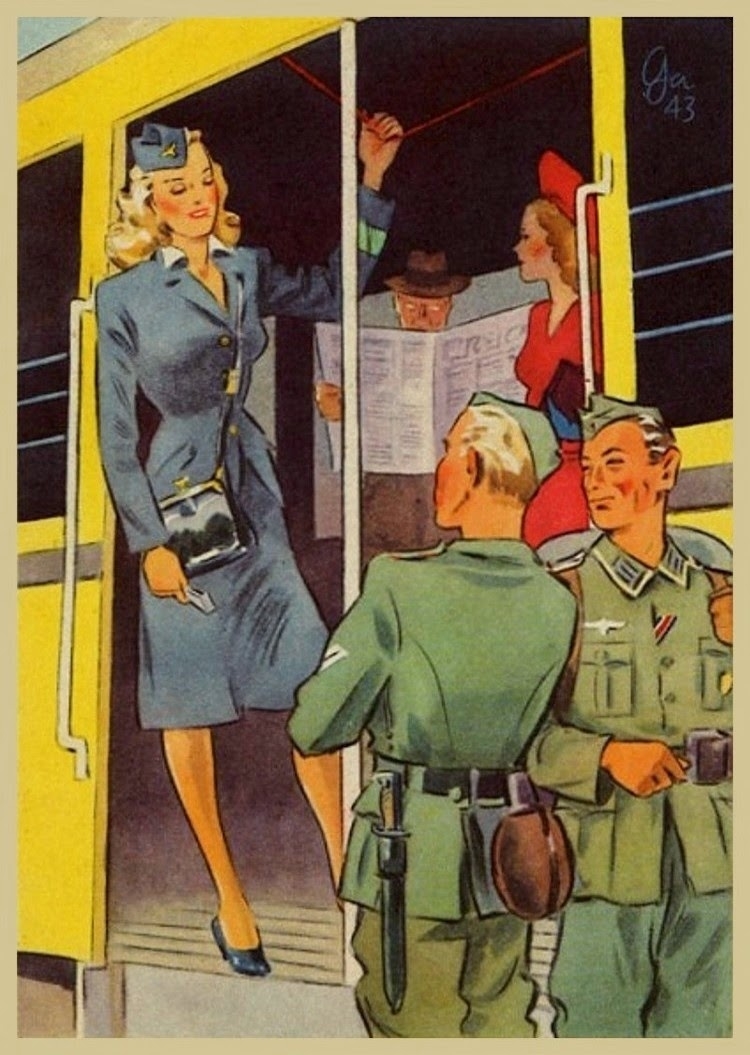 The taboo art and propaganda work both beat in the same soul, heart, and spirit and he/she disappears. It inspires the desire for erasure in me. To discover another life out of the thousands there are to be choose from, to be a different artist, to be born again and make fresh new mistakes, reinvent oneself and escape the tired and the true, the correct and predictable artist she has become. 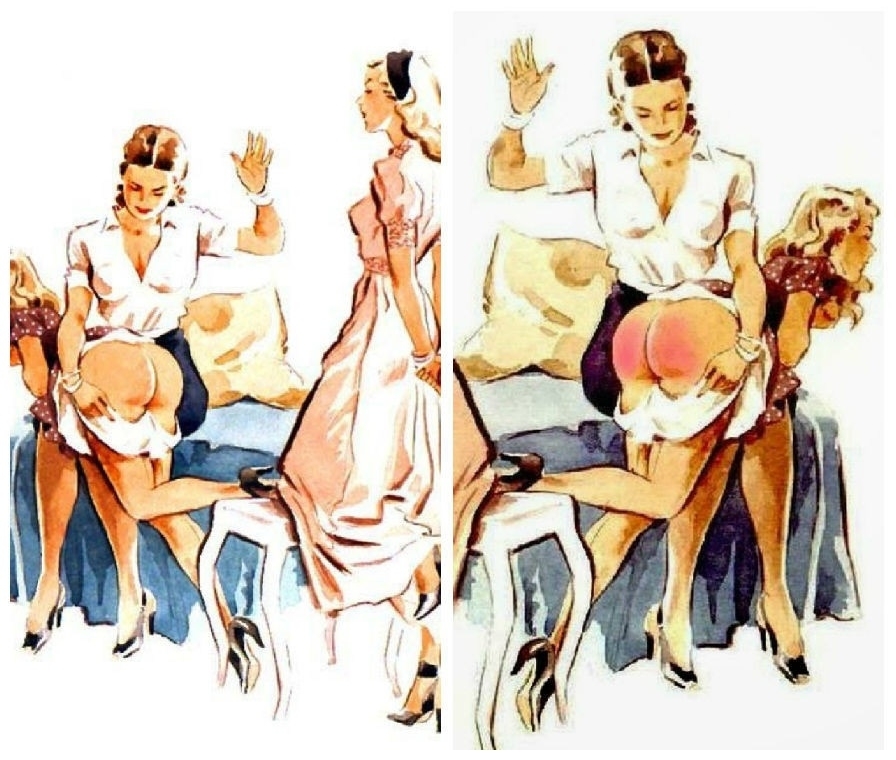 And finally, if one is honest with oneself, I am attracted to the women in both series. They appeal to order and at the same time disorder sitting just under the quaint blouse, the trim knee-length grey skirt, behind the long white Red Cross apron, or when a full dressed serious looking woman in bra and panties holds the erection of the young man in her hand and points it at the behind of another pretty woman who turns and smiles, lips pressed together in anticipation. 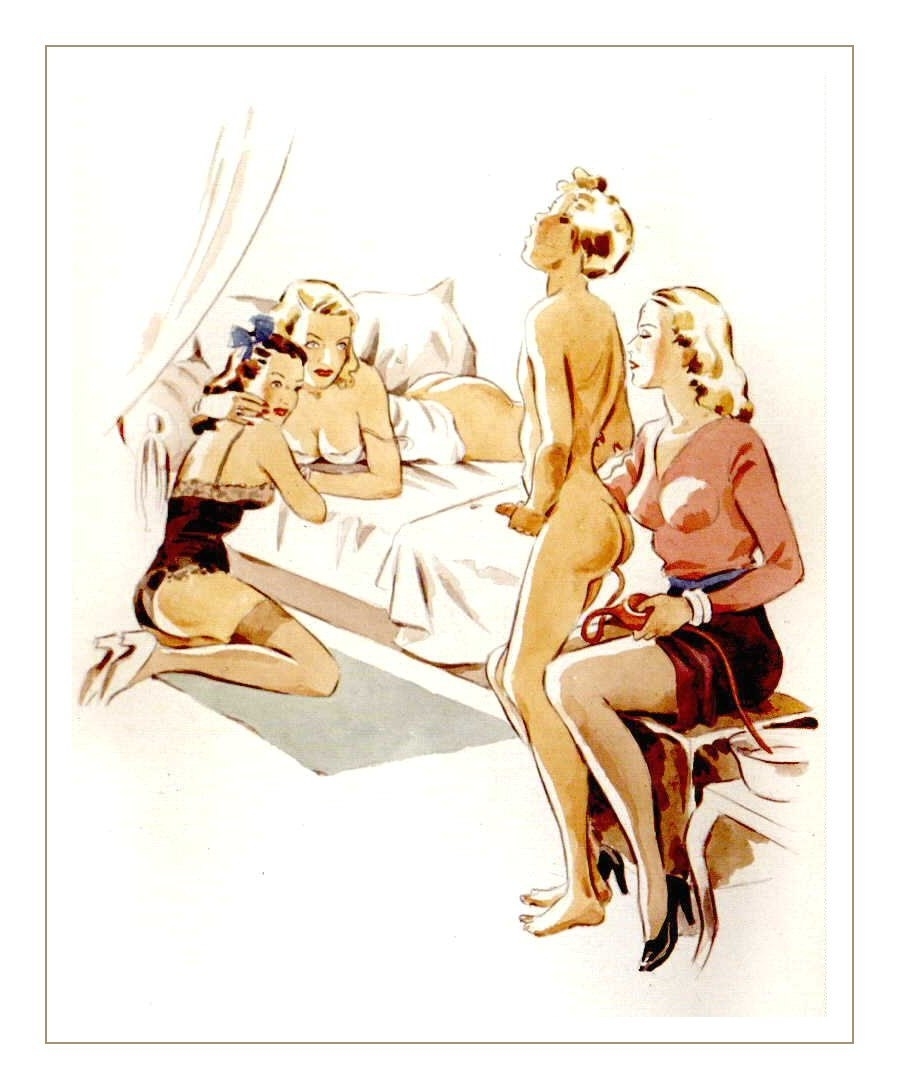 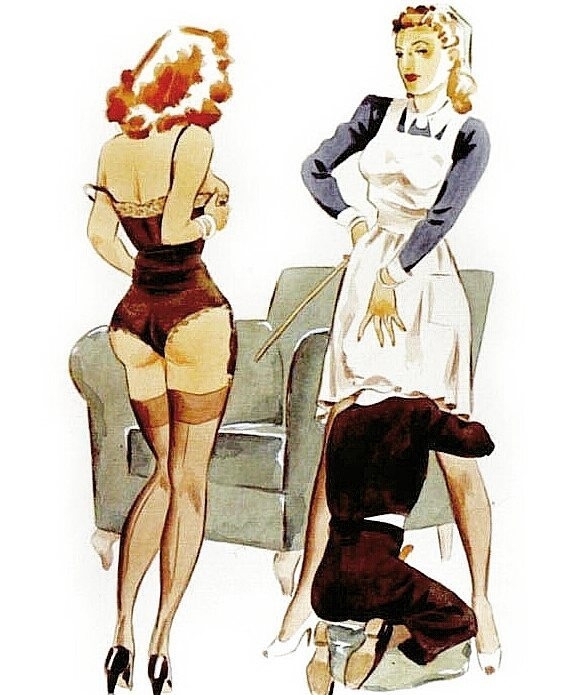 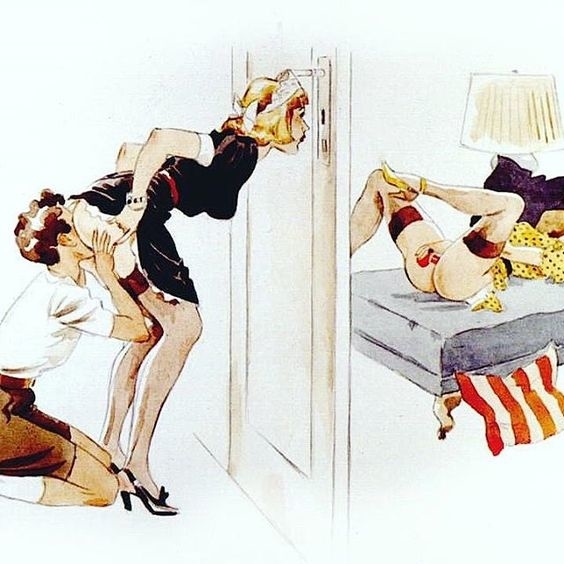 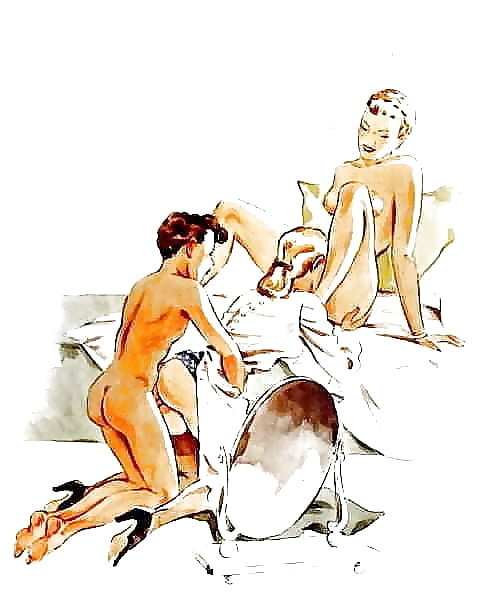 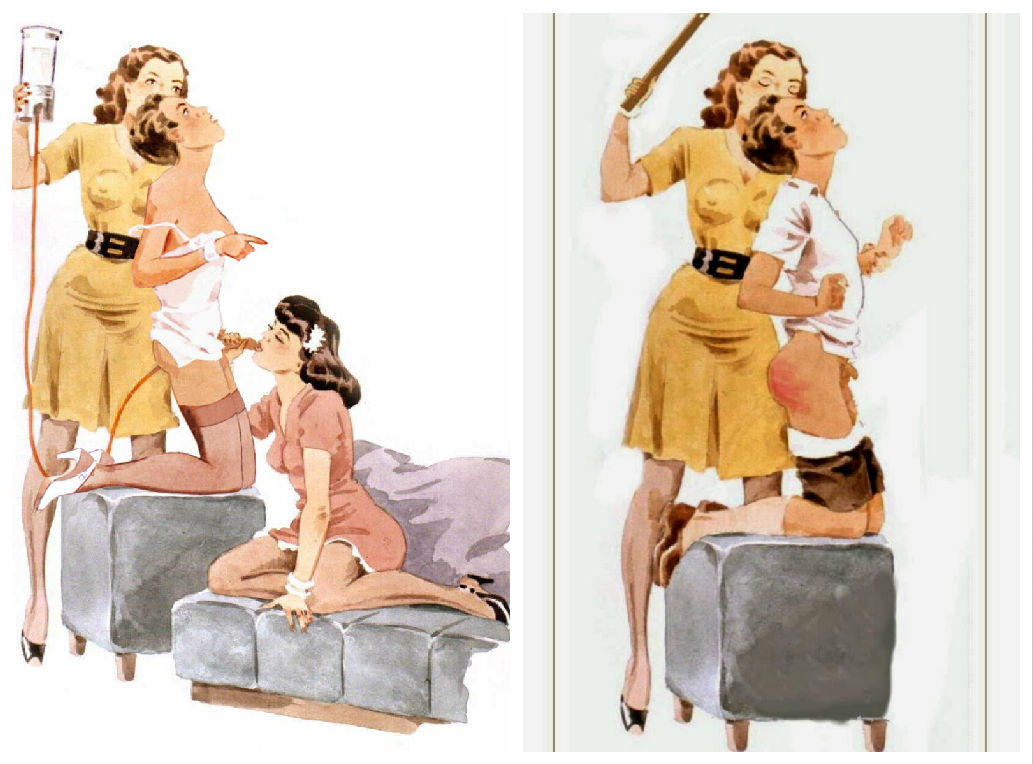 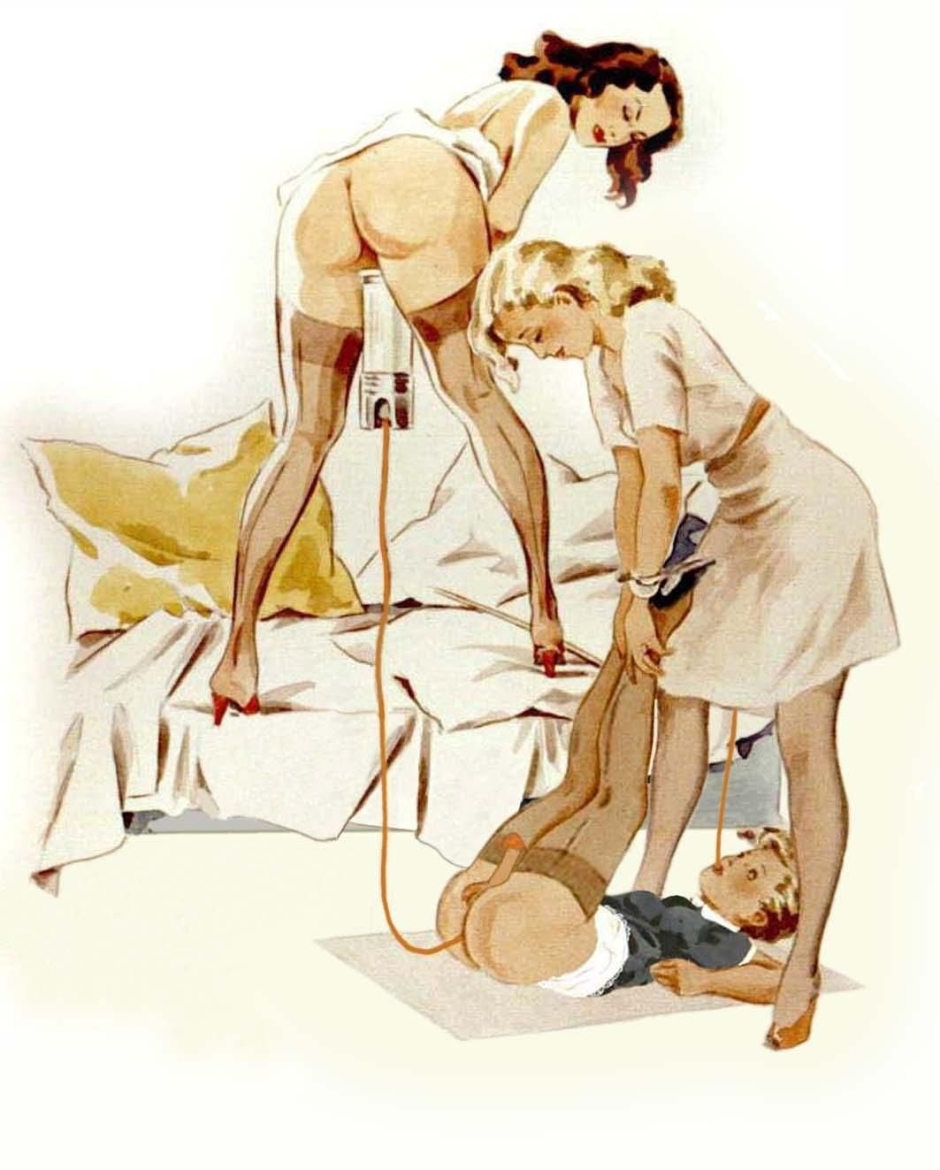 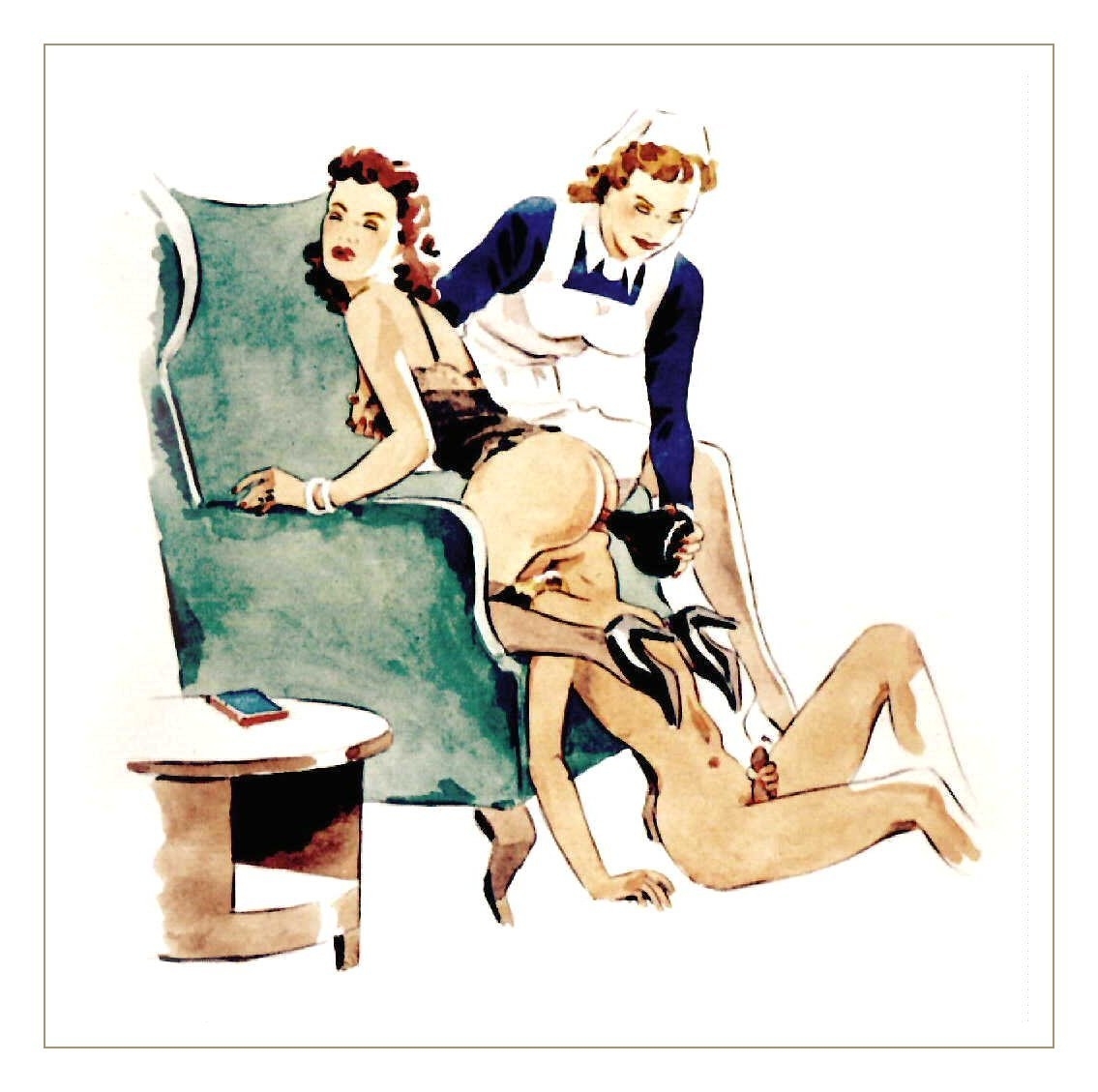 Click HERE for an article on the kinky art site Vintage Fetish Art….!!

Can't get enough of Delcourt's enticing enema watercolors? You can discover over dozens of other striking examples in our Premium section. Click here and subscribe to our FREE risk free 30-day trial and check out this and much more exciting content...!!

What is your favorite subject in sensual art (shunga, bomdage, fetish, gay, hentai…etc.)? Leave your reaction in the comment box below…!!

About the author
Anonymous
Anonymous
Others also read these

Very nice article about Julie Delcourt. I have a small note, among the many enema artworks, only two spanking artworks can be seen. The spanking you share in the article are digital edits by artist FunBun, a Dutch spanking enthusiast who once made a series based on the enema artworks by Delcourt/Gagelmann.https://vintagefetishart.com/altered-spanking-art-from-judie-delcourt/https://spankingartworks.com/funbun-2/Gagelmann remains a mystery, coincidentally I spent hours tracing information last week. I came across websites where there were heated discussions in the comments ;-) Some believe that Delcourt didn't exist, that someone deliberately placed a signature with a date to mislead people. These people are also very keen to hold on to the idea that the enema were works of art by a man (Gagelmann). I wouldn't be surprised if it ever surfaced that the drawings were by Ilse Ziegler, the woman Gagelmann married and who broke up again in 1933. But hey, I'm also a romantic art lover sometimes lol

Thanks a lot for your additional info Karen.

Definitely Gert Gagelmann. Delcourt was just the signature from someone who traced with pencil from the originals.

Thanks for your additional info Ryan